This year has been full of change as attractions and venues have closed, experiences have opened, and announcements have been made for more things to come. There is always something new at Disney World, and this winter is no exception! For those of you with upcoming visits to the park, here is what is new and coming soon to the Walt Disney World Resort at the end of this year and beginning of 2016.

The holidays are in full swing at the Magic Kingdom, and everyone seems to be getting into the holiday spirit. The decorations are up, and we’ve already celebrated the first Mickey’s Very Merry Christmas Party of the season (You can read our full guide here, and make sure to check out all of Tad's terrific party videos). Elsa, Anna, Kristoff and Olaf have returned to frost Cinderella’s Castle in glittering icicles nightly in A Frozen Holiday Wish. The Fairy Godmothers-in-Training at the Bibbidi Bobbidi Boutique bring the glittering spirit of the season as they create special Minnie Mouse Holiday transformations, now through Jan. 3. (also available at the World of Disney Store in Disney Springs). The skippers over at the World Famous Jungle Cruise share the joy and laughter of the season with the return of the annual, holiday-themed Jingle Cruise.

As the skippers celebrate the holidays along the river, we anxiously await the opening of the Jungle Skipper Canteen, set to open in the coming months in Adventureland. The restaurant will serve “World Famous Jungle Cuisine” in its several unique dining rooms, such as the crew mess hall and a secret meeting room of the famed Society of Explorers and Adventurers. 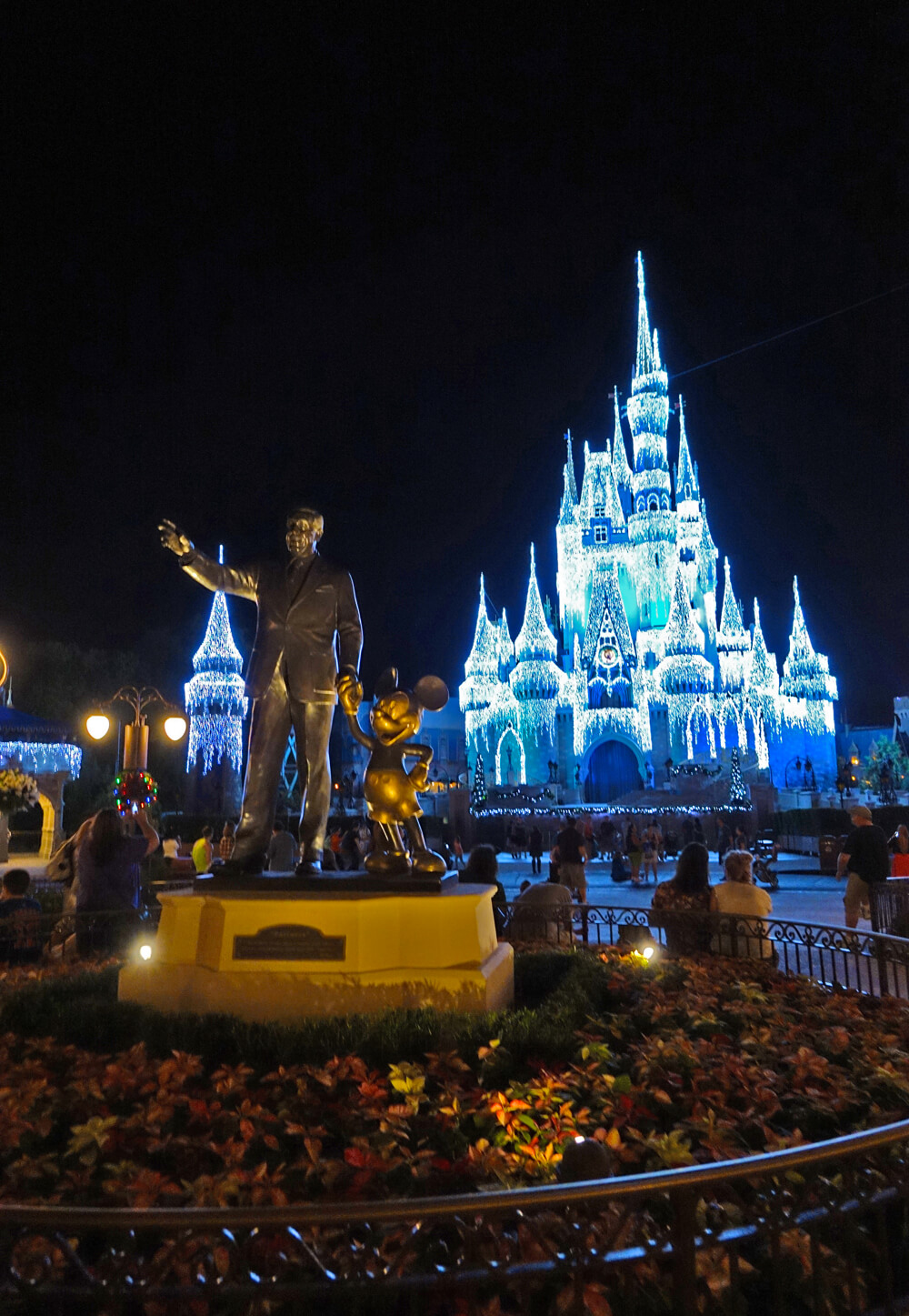 Just in time for the holiday celebrations, the hub construction is finally complete with two gorgeous gardens for relaxing during the day and parade and fireworks viewing at night (make sure to get a FastPass+ for these reserved viewing areas!). Four new turrets flank the centerpiece of the park, with two towers on each side framing the iconic Cinderella’s Castle.

Along with the announcement that Star Wars Weekends will not be returning to Disney’s Hollywood Studios comes a new hope as details emerge for new Star Wars experiences coming this winter. The Launch Bay, which we heard about back at the D23 EXPO, is set to open in December. Guests will have the opportunity to step inside the upcoming film, Star Wars: The Force Awakens, with special exhibits and a look behind-the-scenes, along with exclusive merchandise and meet and greet opportunities with Chewbacca and Darth Vader. 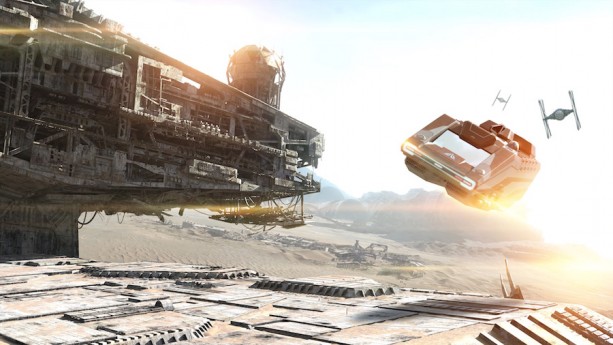 A new destination will be unlocked at Star Tours: The Adventure Continues. During the first few months, the Starspeeder 1000 will be guaranteed to take you to this new experience, but will later return to being decided by the will of the Force. Star Wars: Path of the Jedi will feature scenes from the complete saga, allowing new fans to get to know the Star Wars universe. Finally, the much anticipated Jedi Training: Trials of the Temple will be a reimagining of its predecessor, pitting younglings against Darth Vader and the Seventh Sister, a new villain from the Star Wars Rebels series on Disney XD. The new Star Tours destination, Launch Bay, and Star Wars: Path of the Jedi are all set to open December 1st with Jedi Training: Trials of the Temple premiering soon after.

Coming in January, a Star Wars themed fireworks celebration will take place nightly with an optional dessert party (for an additional cost). The fireworks are expected to run early January through mid-March.

Don't miss out on the final season of The Osborne Family Spectacle of Dancing Lights, which runs through Jan. 3. We dare you to watch Tad's video and try not to sing along! 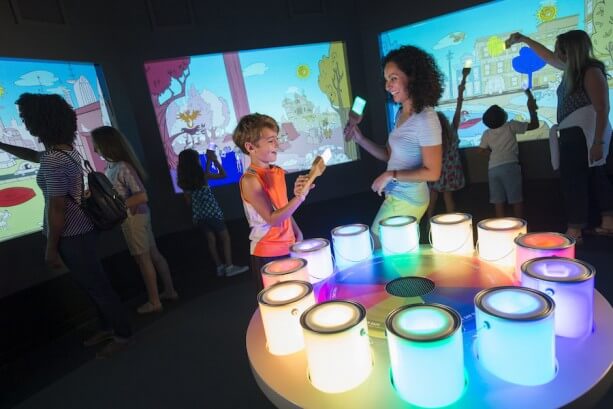 Colortopia at Innoventions East invites guest to dive into a world of color with three interactive experiences. The Power of Color blends vibrant hues with harmonious sounds and narration to discover the psychology of color by exploring how color relates to our emotions. The Color Lab features a Color Mix n’ Match that allows guests to mix their favorite colors to create a whole new rainbow, and Spinning Spectrums, which challenges our perceptions of color. At the Color Our World station, guests use a magic paintbrush to create spectacular stories and scenes on a digital screen. The fun doesn’t stop when you leave Innoventions. Guests who download the Colortopia mobile app can collect colors from pavilions in the World Showcase to add to their personal palettes to play games that test your memory and understanding of color.

Kilimanjaro Safaris welcomes hyenas to the savanna. Two spotted hyenas have been introduced to the safari and are quickly making themselves at home. Most of us think of Shenzai, Bonzai and Ed, Scar’s trio of laughing underlings in the Lion King, but there is much more to learn about this fascinating species. 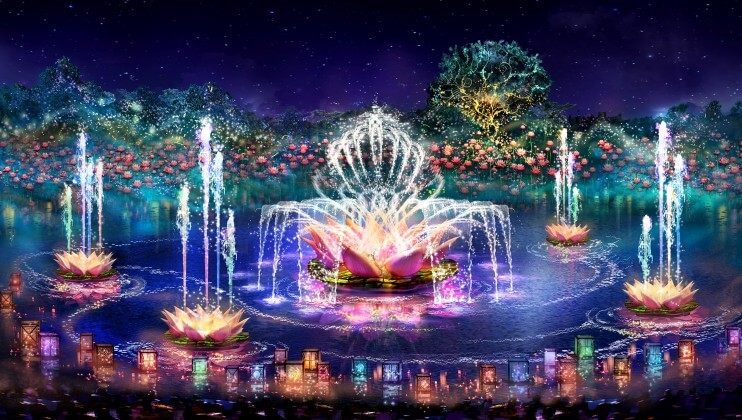 In spring of 2016, Disney's Animal Kingdom welcomes its first nighttime spectacular. "Rivers of Light" will showcase live performances, floating lanterns, water screens and animal imagery in keeping with the park's theme. The show will take place on Discovery River, with the hosts setting out from the shore on lantern vessels in a dance of water and light.

Construction on the ramp from Interstate 4 to the Orange Garage is now complete at Disney Springs, although construction continues on the road, overpass and second parking garage in addition to new venues popping up everywhere. The second pedestrian walkway is also now open, allowing guests to safely cross over Hotel Plaza Boulevard to Disney Springs. 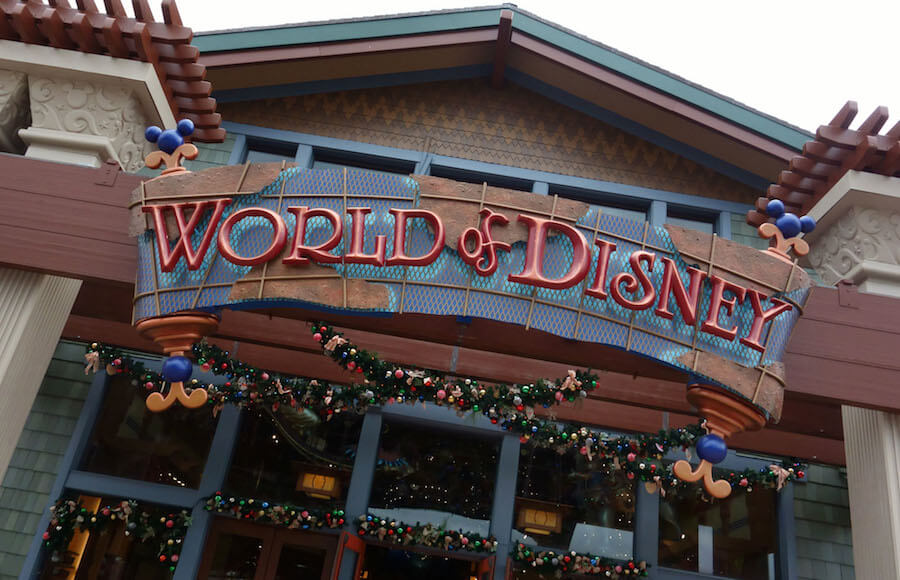 The Twenty Eight & Main Boutique, now open in the Marketplace Co-op, adds a hint of Disney to men’s accessories and apparel for distinguished gentlemen. The collection offers a stylish selection with classic cuts for men who want to show a glimpse of their Disney side. For you hard-core Disney shopping fans, the World of Disney store has expanded! Yes, the largest Disney store in the world has gotten even bigger. There is 6,000 more square feet of retail space and a new entrance. For those of you at the store between Nov. 26 and 29, it is offering free shipping so you can get a jump on that Christmas shopping!

The holidays have arrived at Disney Springs as well, with Santa set up in a new location near the Ghirardelli Soda Fountain and Chocolate Shop in the Marketplace!

In addition to these exciting new offerings, Walt World is decked out with special experiences for the season. Check out our earlier post for a Complete Guide to Disney World During the Holidays. With so much that’s new to see and do, and more to come, this is one of the best times to visit Walt Disney World! Which new experiences are you most excited to see?