Best Viewing of the Main Street Electrical Parade at Disneyland

Mommy Frog's Note: Hi, ho! The Main Street Electrical Parade had ended ... or so we thought! Disneyland Resort has teased that the fan-favorite parade will be returning in time for the parade's 50th anniversary this year, date TBD. Stay tuned for all of the details!

"Disneyland proudly presents, our spectacular festival pageant of nighttime magic and imagination ..." Those words get my frog goosebumps going! 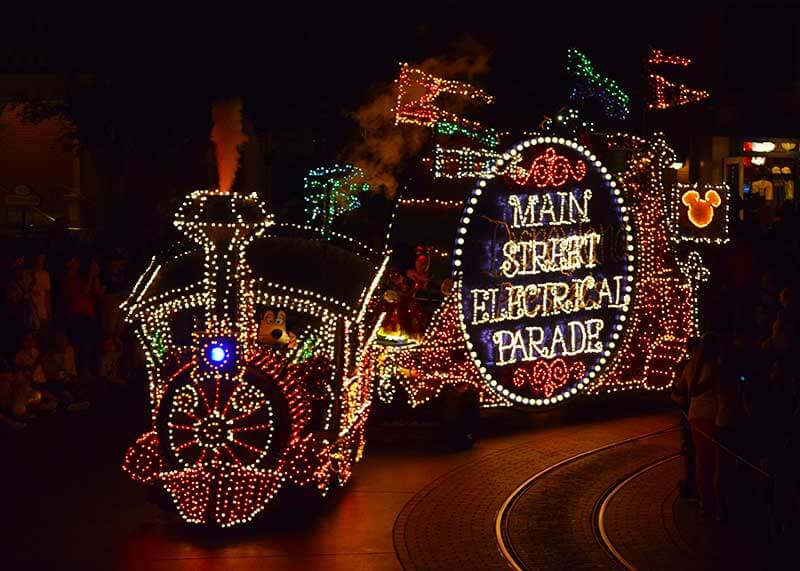 I've been feeling toadally nostalgic with the announcement that the Main Street Electrical Parade will be returning to Disneyland. I remember seeing it for the first time, eyes alight with joy, as a young froglet. Leap and I were introduced at our wedding reception to the music of the parade’s signature song, “Baroque Hoedown” — true story! (LEAP'S NOTE: I suggested Rainbow Connection, but that was too on-the-nose). It was great to see this nostalgic parade return in 2019. And we're so hoppy that it'll be returning to Disneyland again soon! While we wait for more details, here's a look back at our favorite viewing spots for the Main Street Electrical Parade.

Best Viewing of the Main Street Electrical Parade at Disneyland

When does the parade run? 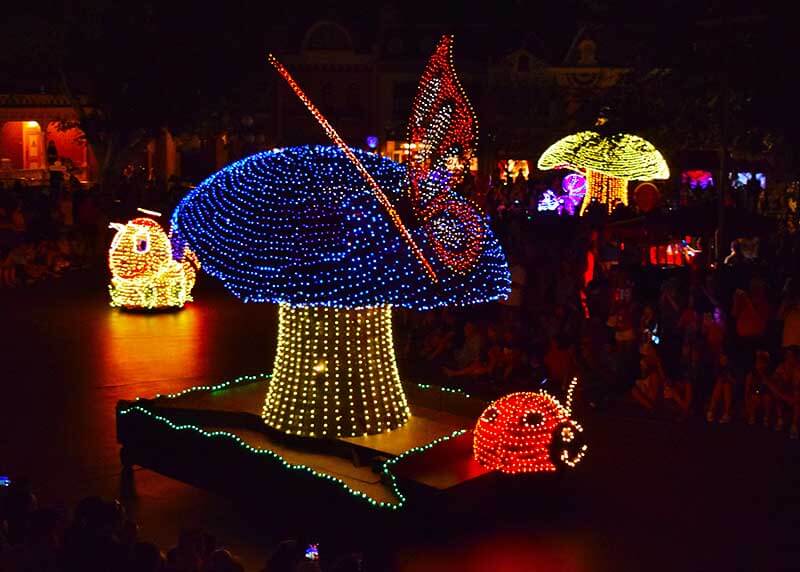 As it says in the opening narration, this festival pageant of nighttime magic only runs in the evening. Performances are held either once or twice a night, usually running before and/or after the fireworks show or sometimes earlier on nights without scheduled fireworks. Check our Los Angeles Crowd Calendar for parade times, but expect to see the show about 8:45 p.m. (starting at "it's a a small world") and 10:45 p.m. (starting near the Main Street, U.S.A. train station and returning to "it's a small world").

Where is the best viewing spot? 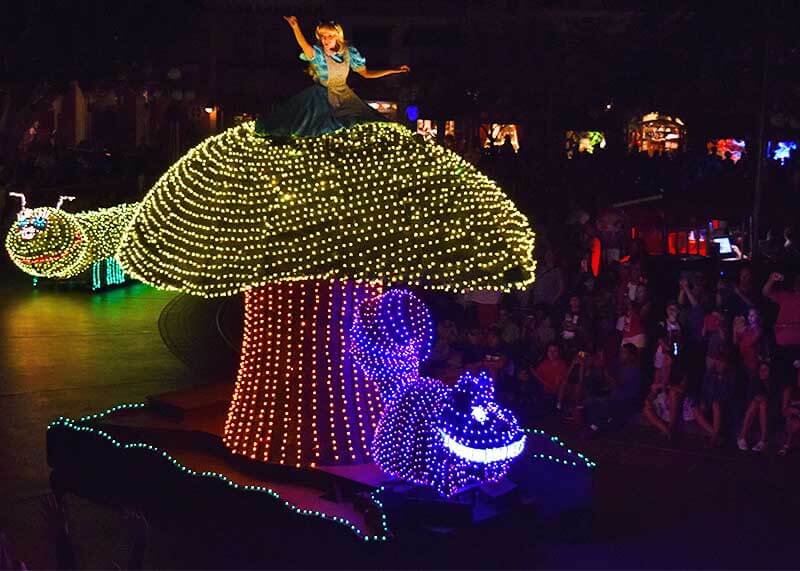 The best viewing of the Main Street Electrical Parade has to do with several factors — crowds, fireworks, parade direction, your patience level and whether you are seeing fireworks before or after the parade. If you want to watch fireworks from a specific location, see the next section below for our advice on managing both. The parade usually runs from “it’s a small world” toward the entrance to the park. If there is a second parade, it runs in the opposite direction.

It is good to know where the parade is coming from because you’ll want to view it coming down the road and make sure you are not directly behind a pedestrian crossing point. Those people crossing the street right in front of you can really affect your photos or videos and interrupt your magic. (Let’s just say we learned that the hard way when watching Paint the Night once.) Now we make a point to be far away from or in front of the crossing areas for an uninterrupted view (and that means knowing which direction the parade is coming from).

Some viewing areas fill in early — really early. We've seen people snagging spots about two and a half hours early! Front row curb locations go first, especially on Main Street, U.S.A. and near Sleeping Beauty Castle. Then the curb locations near “it’s a small world” get snatched up. Many families put out blankets, towels or tablecloths to secure a spot and either rest for a while, have a picnic or have one person save the spot, with the rest of the family returning 30 minutes before the show. If you do not wish to camp out, you can stand behind people.

We found that the raised area to the right as you are walking toward “it’s a small world” from the Matterhorn is a great last-minute spot. It provides a good view of the parade above the rest of the crowd. You can jump in place only 20 to 30 minutes before the show. You can access it across from the Storybook Land Canal Boats attraction. Another great spot is the railing in front of the Main Street, U.S.A. train station. You are raised up above the crowd for an unobstructed view. You can stand within roped areas and may even score a bench! We enjoy the side closer to City Hall for the first parade and the other side for the later parade.

If there is a second parade, the crowds will be much thinner. It will be easier to get a good spot for the later parade than the first parade. After the fireworks are over, you can hop onto a curb or bench and get ready for the next parade. It’s late, your frog legs are tired, and you will enjoy the rest at that point. Send a runner for snacks or hot drinks and kick back. Starbucks run! You can sometimes even find some spots down near the train station (perfect for that post-parade quick park exit) even minutes before the second parade starts.

What if I want to see fireworks too? 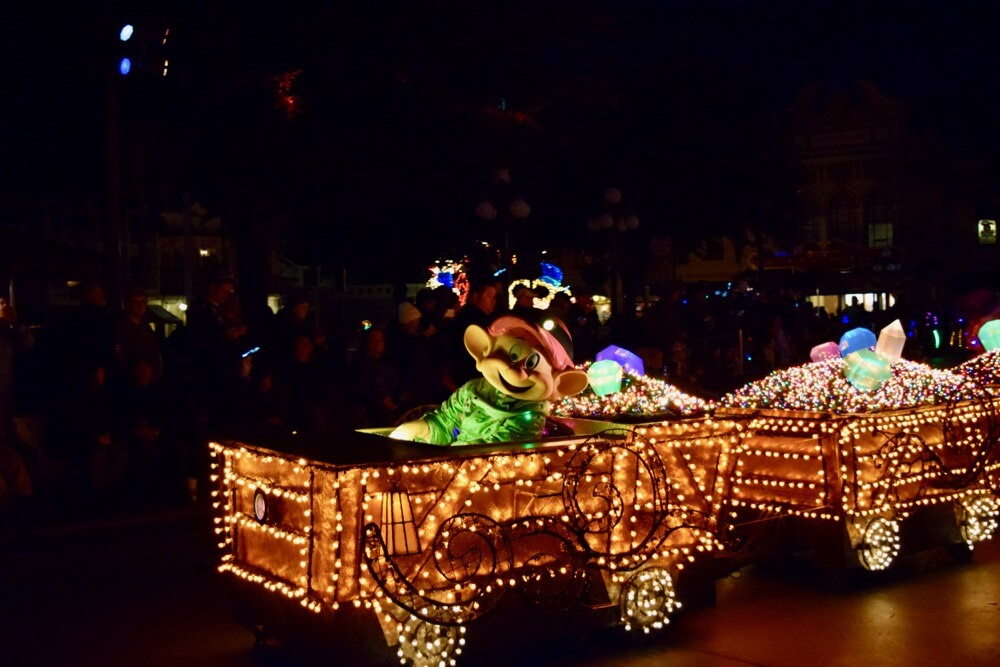 Some areas are designated walkways, such as the Partners statue in the hub. Others might be VIP areas, so be sure to check with a cast member if you are not sure. The parade runs on the Tomorrowland side of the traffic circle around the statue. The curb of the Frontierland side of the traffic circle won’t give you a front-row view, or even a good view (which is why that side of the castle fills in much later). Once the first parade ends, guests throughout Main Street, U.S.A. can file into the street for fireworks. Be packed up and ready to move at parade end. The sidewalks then become the walking areas.

Choose a location that is not directly behind trees. You’ll want to see the sky above the castle. As mentioned, if you can wait for the second parade, you can hop onto a curb after fireworks and have a great parade viewing location.

If you enjoy seeing the fireworks but aren’t worried about getting that perfect castle view, we recommend watching the parade and fireworks near “it’s a small world.” You will have more elbow room for both shows, and you will actually be closer to where the fireworks are launched (behind Mickey's Toontown).

Are there any dining packages?

If you would rather get a reserved viewing location for the parade, you can purchase a dining package from Plaza Inn. Adults can feast on a lunch of fried chicken breast, pulled pork, macaroni and cheese, baked beans, corn cobette, watermelon and corn bread with a New York cheesecake dessert. The kid’s meal includes chicken tenders, macaroni and cheese, watermelon, corn cobette and corn bread served with New York cheesecake. Vegetarian options are available upon request.

Each Plaza Inn Dining Package includes one lunch entrée and one drink per person, one voucher that provides access to the parade’s reserved viewing area and one Plaza Inn credential.

Once you collect your food, you may dine at any of the available restaurant tables. Later that evening, you'll head to the special reserved viewing area for the parade, which is across from the Main Street, U.S.A. train station (subject to change). Reservations made between 1:00 p.m. to 3:00 p.m. receive a voucher for the day’s first performance of Main Street Electrical Parade. Honestly, if you want to watch the second parade, you can hop in place a few minutes before the parade without investing any more time or money.

Are there designed viewing areas for guests with disabilities? 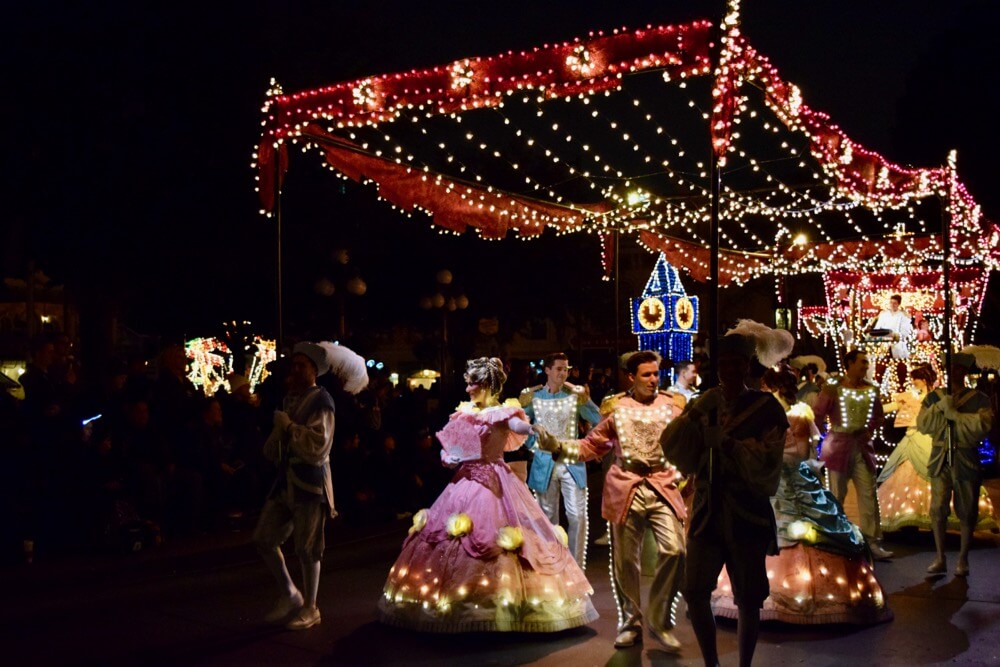 Guests using wheelchairs can watch the parade from any viewing location, but there are also some first-come, first-served parade viewing areas for guests with disabilities. If you want a parade viewing location that is also good for watching fireworks, check with City Hall earlier in the day about reserving a wheelchair-accessible space for fireworks because space is limited in that location.

Are there themed treats to enjoy during the parade? 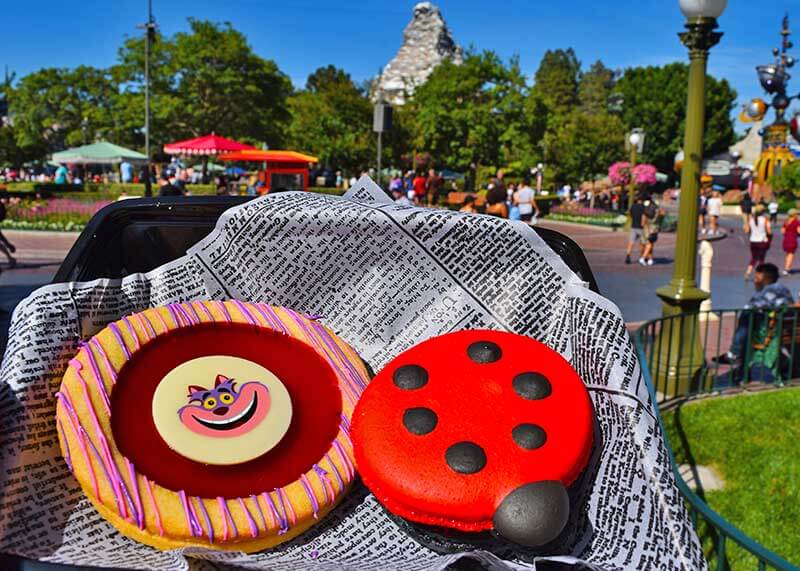 We are so hoppy you asked! Yes, there are some special treats that are available along the parade route during the parade run. You can find some sweet treats at Candy Palace and some fun desserts at Jolly Holiday Bakery Café. Refreshment Corner has revealed some of our favorite Disneyland secret menu items that have stuck around (but aren't on the main menu) from the last run of the parade: Firefly Chips, Chili Mac Bread Bowl and Firefly HotDog. At Carnation Café, the spicy chicken sandwich has returned and you can order a raspberry lemonade shake. Gibson Girl has brought back Fantasia ice cream — a nostalgic blend of cherry, pistachio, and banana ice cream featuring chipped pistachios and cherries — and the colorful Fantasia Waffle Bowl Sundae. 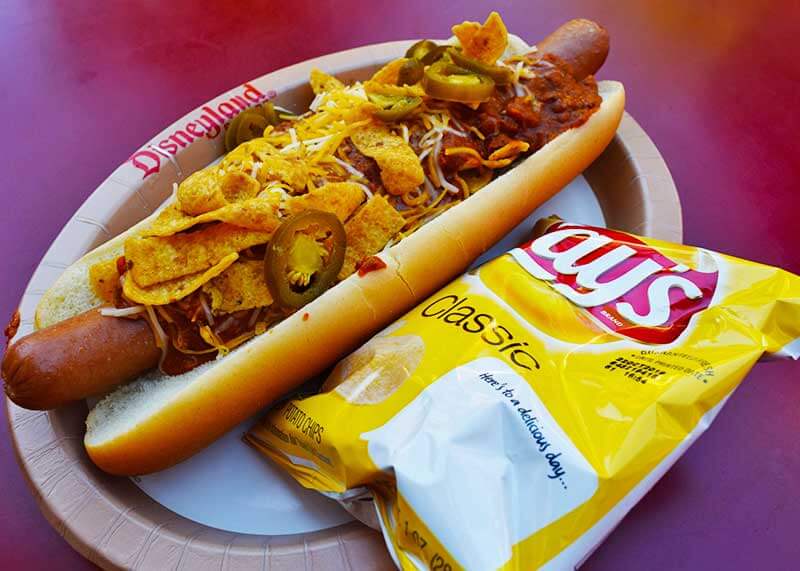 What if it rains?

It never rains in Southern California. While it's a popular myth (and semi-known song) that SoCal doesn't get rain, the winter months can bring some rainfall. Luckily, this parade run is during the driest summer months. The parade cannot run in the rain or if the ground is wet. It's possible for Disneyland to cancel or reschedule the parade due to rain. If you are visiting on a rainy day, watch the hourly weather. Check with cast members for the latest updates. If the parade is going to be canceled, the park will make announcements about five minutes before scheduled parade time. An alternate nighttime show that isn’t hurt by a little water is the World of Color show at Disney California Adventure. Both World of Color and fireworks can be affected by heavy winds. 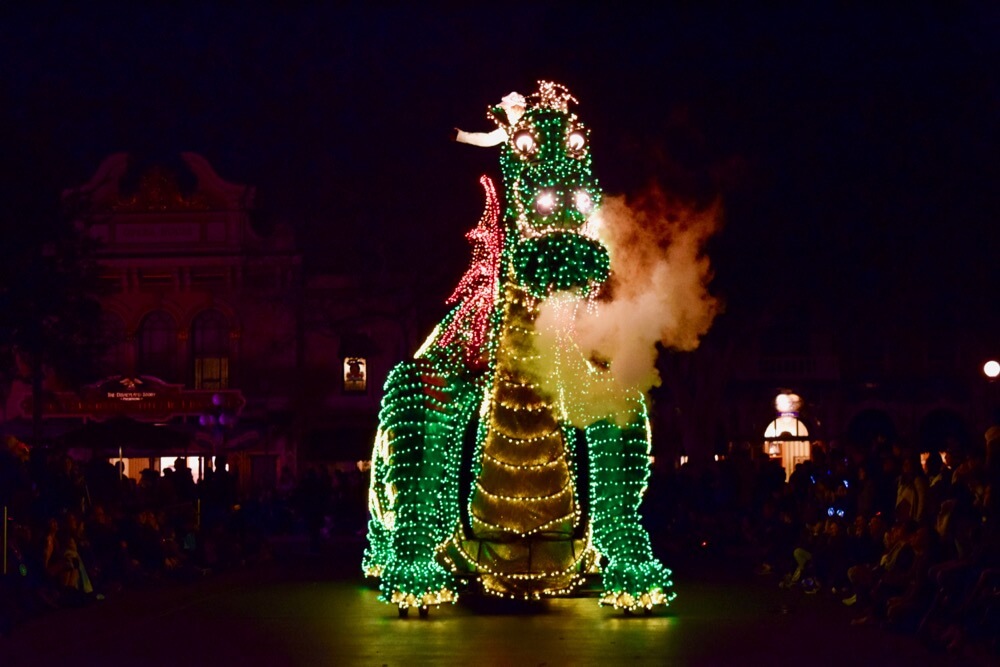 Once when we saw the parade on a rainy day, we brought trash bags to sit on, protecting us from the wet ground — definitely a smart move. Yes, we're amphibians than live in water, but the trash bag is more a "method touring" thing that we do for you. Even though the park was the emptiest we had ever seen it — thanks, SoCal rain — we hopped into one of the last remaining front-row curb spots on Main Street, U.S.A. about 75 minutes before showtime. We were right in front of the crossing area, which means our view was not obstructed. Tad recorded the first parade, which you can watch right here. 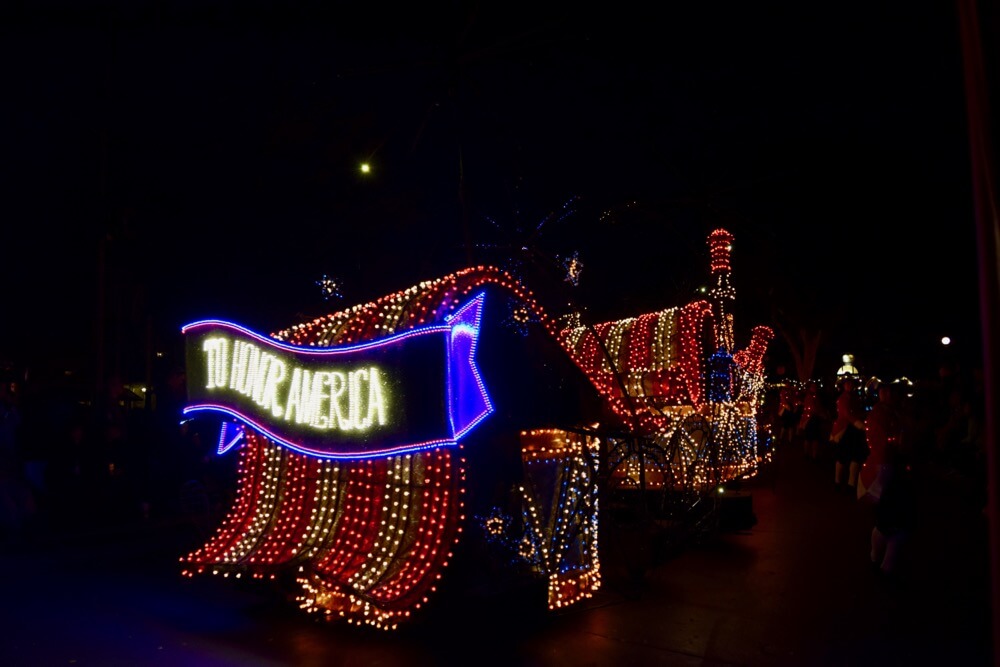 After the first parade, we park-hopped over to catch World of Color. Then we hopped right back for the second Main Street Electrical Parade. We were lucky to get a front-row spot again last minute (and just in front of the pedestrian crosswalk). If you really don’t like to wait around or feel packed in, the second parade (if offered) is the way to go. Here’s to making hoppy memories with your family. Enjoy taking a step back to a simpler time by viewing the Main Street Electrical Parade together!