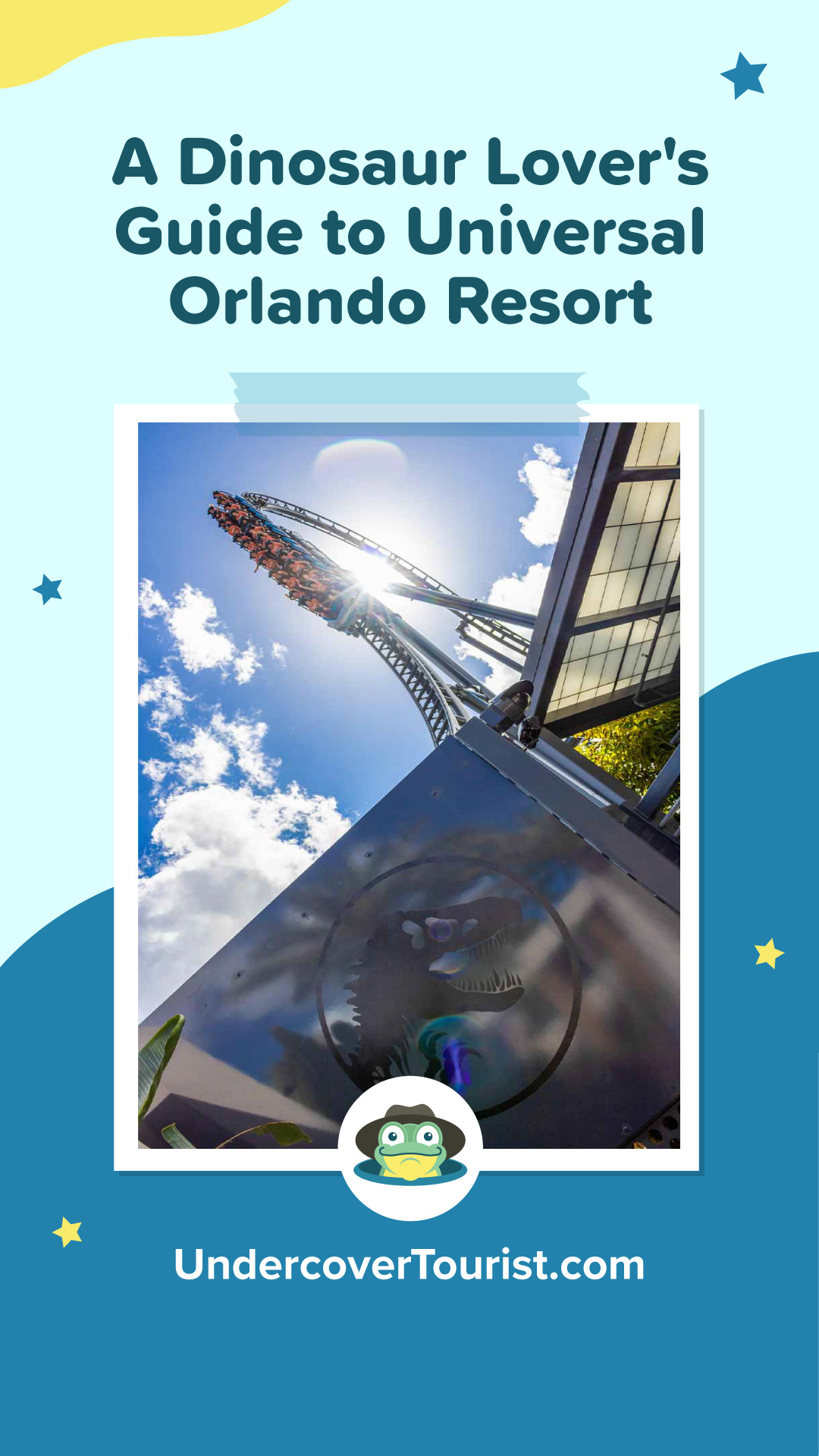 'Sup! Tad here. Did you know I have ancestors that are 99 million years old? That's right. Frogs roamed the earth alongside dinosaurs all the way back in the Mesozoic Era. Hence, the Age of the Dinosaurs has always fascinated me. That's why I love exploring Jurassic Park in Universal's Islands of Adventure. Inspired by the film series of the same name, this island lets frogs channel their inner Dr. Alan Grant and Dr. Ellie Sattler and travel back to a time when giants walked the earth. Filled with rides, restaurants, stores, activities, photo ops and  dino eggs galore, Jurassic Park is a dinosaur lover's dream. Just remember one thing: "Life, uh, finds a way."

If you were looking for teeth, you've come to the right place. Enter the raptor paddock where Jurassic World management has upped the game with its "carnivore expansion" by building a roller coaster in the home of its four fast (and hungry) velociraptors: Blue, Charlie, Delta and Echo. What could go wrong ... ? The newest attraction to hit Universal Orlando Resort, Jurassic World VelociCoaster is the apex predator of roller coasters — that is, the fastest and tallest launch coaster in the entire state of Florida. 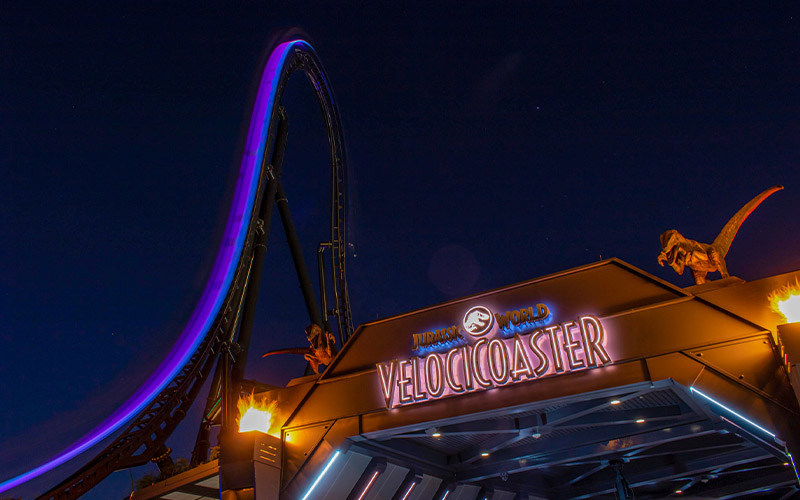 This one-of-a-kind, high-speed chase features 12 seconds of airtime and four inversions along its 4,700 feet of track. You'll feel the rush of the hunt as you experience a launch that hits 70 miles per hour in just 2.4 seconds, a 155-foot top hat that results in an 80-degree drop, a zero-gravity inverted stall and a 360-degree barrel roll over the park's lagoon. As my friend Owen says, "Hands, arms, feet, keep 'em in the vehicle. With any luck, you'll still have fingers and toes before you exit through the gift shop." 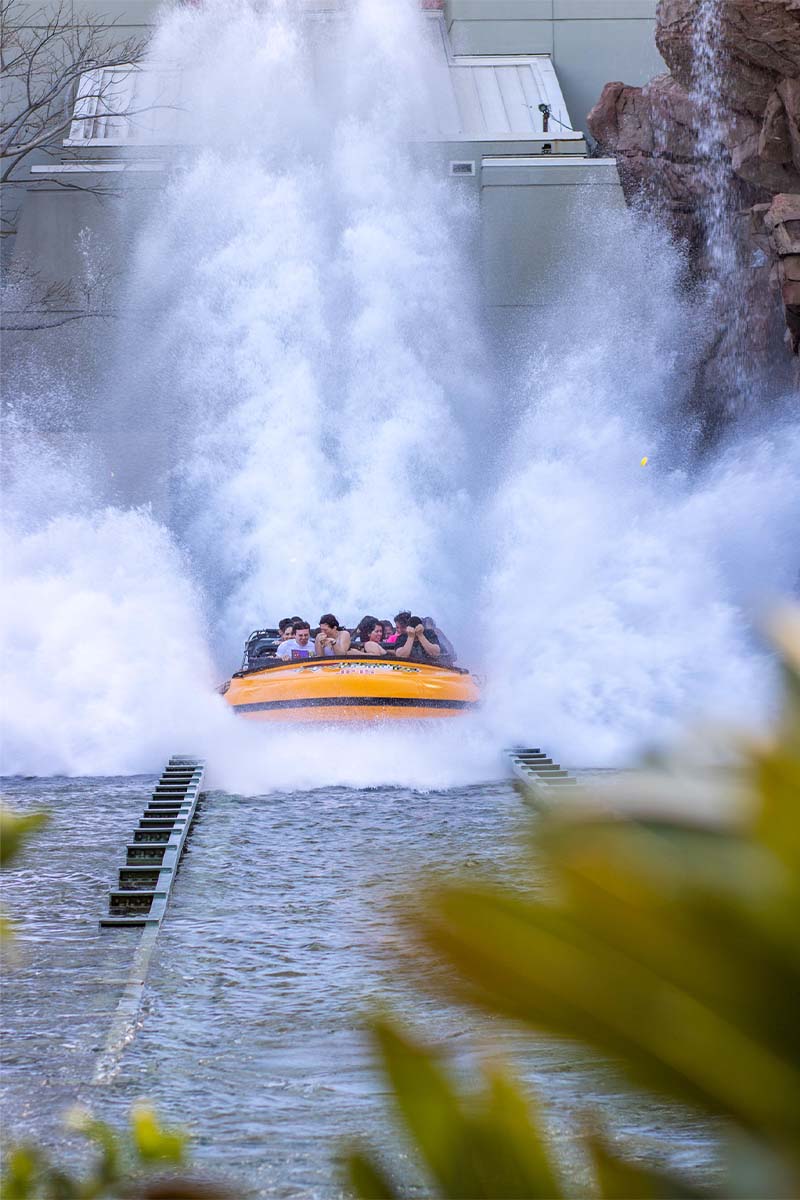 Before you embark on your ... um ... tour through the paddock, you'll get to have an up-close encounter with Delta and Echo in the stand-by queue. These dinos are truly state-of-the-art. Not only will they react to you as you're walking by using innovative technology, but you'll even be able to smell them! In addition to these magnificent creatures, there are also several familiar names and faces hidden throughout the queue so be sure to keep your eyes peeled.

A sight-seeing tour sixty-five million years in the making, what begins as a scenic (and educational) boat ride through John Hammond's prized park takes a turn for the terrifying when a startled dino knocks your raft off-course and sends you straight into the Raptor Containment Area. Your only escape? An 85-foot plunge into pitch-black darkness. 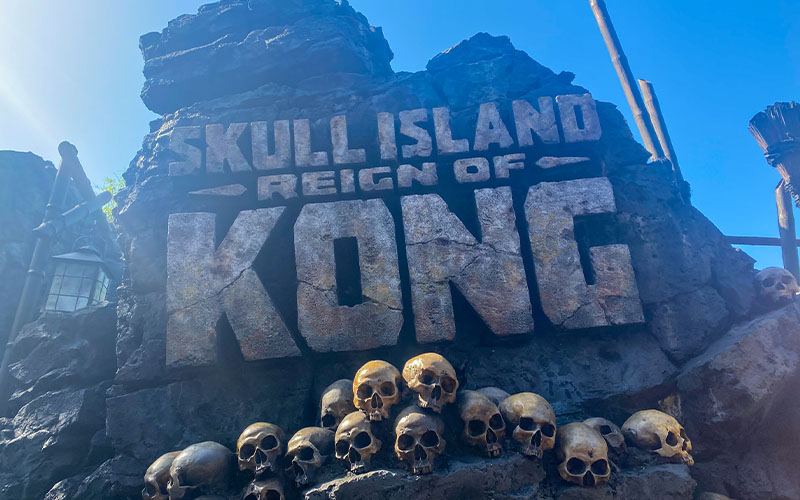 What? The ride with the giant gorilla? Why is that on here? Great question, friend! It's because the giant gorilla — while incredibly impressive in its own right — isn't the only prehistoric predator you'll encounter on your expedition. Allow me to introduce you to the Vastatosaurus Rex, the largest and scariest creature on Skull Island. Reminiscent of a T. rex, this mammoth animal is rather agile and incredibly feared. It can change direction at high speed like nothing and likes to rip its prey to shreds with its razor-sharp teeth. The "ravager lizard king" is just one of a few species of dinos that inhabit Skull Island, so be sure to keep an eye out! Best of luck, explorers! You're gonna need it ...

Offering unfroggetable views of Islands of Adventure and a bit of relaxation, this attraction allows you to soar above Jurassic Park beneath the 10-foot wings of a Pteranodon. Heads up, Moms and Dads: This slow-moving, gondola-style ride was designed especially for kids, so if you want to ride this one, you're going to have to tag along with a tadpole.

Activities and Entertainment in Jurassic Park at Universal Orlando Resort

Lily and I love getting lost in here. This multi-level prehistoric playground is the perfect place to put your tadpole's adventurous side to the test as they explore mysterious subterranean amber mines and lava pits, climb through dinosaur capture nets and suspension bridges and spray passersby with dino water canons. Overgrown with tropical foliage and rumbling with the roar of dinosaurs, there's no better place for dinosaur lovers to immerse themselves in the Jurassic Park atmosphere and let their imaginations run wild. 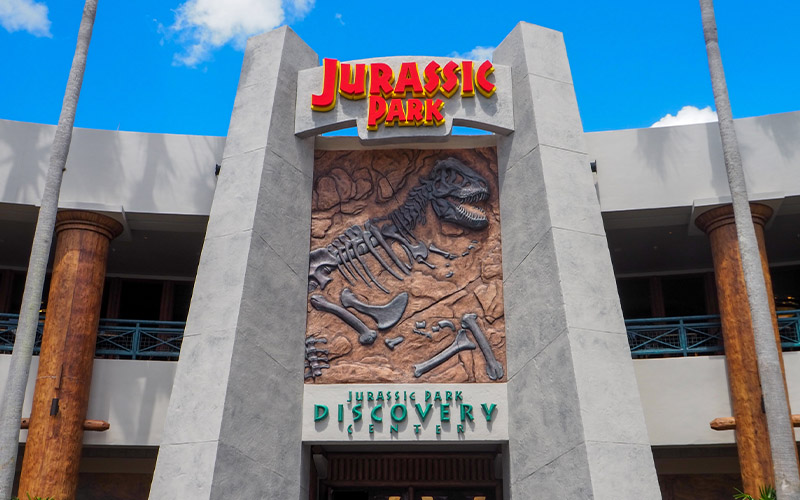 Modeled after the iconic Discovery Center from the original Jurassic Park movie where the T. rex and raptor faced off, this interactive play center features several areas where dino enthusiasts young and old can unearth the mysteries of our planet's prehistoric past. Put your DNA to the test and find out what kind of dinosaur you would've been. Challenge fellow future paleontologists to a game of hilarious dinosaur trivia. Marvel at towering T. rex fossils. Just don't froget to stop by the nursery because, if you're lucky, you may even catch a baby Velociraptor hatching. 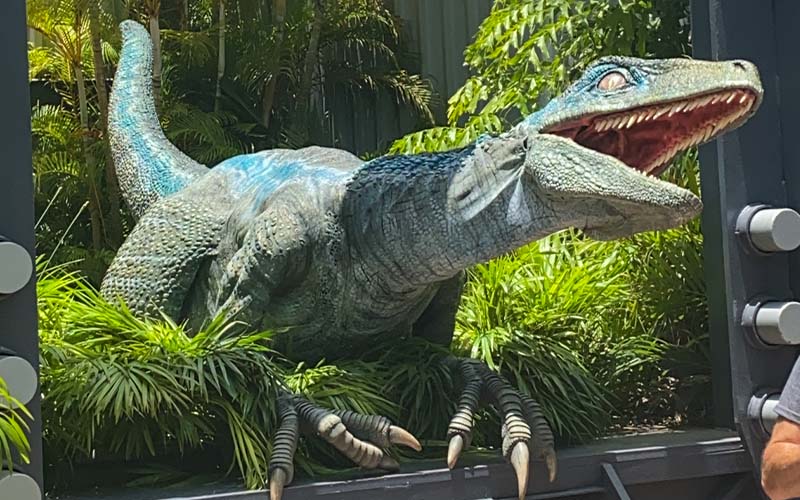 Did someone say baby Velociraptors? Well, if time isn't on your side in the Discovery Center, you can meet a precocious 6-month-old raptor hatchling at the Raptor Encounter. The main attraction here, though, is Blue herself from the Jurassic World films. In this incredibly realistic interaction, you'll be guided by a lively and engaging raptor trainer who will share some interesting facts about the feisty raptor and her natural habitat. If you're brave enough, slowly approach the clever carnivore for a quick photo. You can reach out a hand toward her but be careful! She's an aggressive creature with razor-sharp teeth who can sense your fear and will hoppily feed off it. 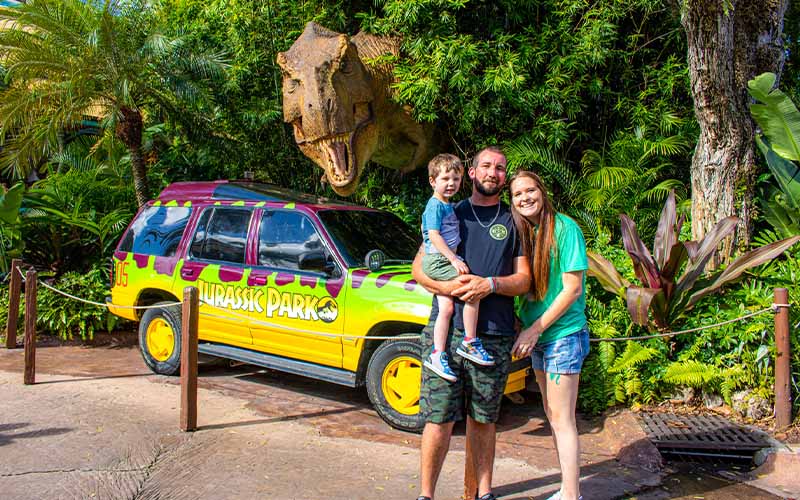 If the idea of approaching Blue is a bit too frightening, no worries! There are several other epic photo ops in Jurassic Park that are sure to make your friends back home jealous with dinosaurs that don't bark or bite. Check out the My Universal Photo Selfie Station right next to the entrance to the island (closest to Hogsmeade) where you can grab a pic with the iconic Jurassic Park Jeep and a scary spinosaurus. Also, head on over toward Thunder Falls Terrace where you can snap a photo with the famous Jurassic Park Ford Explorer and a terrifying T. rex!

Looking for some competitive fun? Test your skills on the rock wall located near the exit of Jurassic Park River Adventure. If you can make it to the top, you'll be treated to an awesome view of frogs splashing down to escape the T. rex. For a different kind of challenge, frogs can play the many different carnival games around Jurassic Park like balloon darts, target shooting games, a high-striker mallet and more where prehistoric prizes are up for grabs!

Not ready to leave Isla Nublar? Book a Jurassic World Kids' Suite at Loews Royal Pacific Resort where your tadpoles can sleep among the dinosaurs! These suites sleep up to five frogs and feature a private room just for the tadpoles connected via a paddock door. These bedrooms are decked out with a large Jurassic World wall mural, a carpet filled with trail markings, bedding designed to look like a test tube that was used to create new species of dinosaurs and custom gyropshere beds. The best part? Staying at the Royal Pacific grants you free Universal Express Unlimited so you can enjoy your favorite rides over and over again!

Which dinosaur are you dying to see first? If you've already been, what's your favorite thing to do in Jurassic Park? Let me know in the comments below!

SAVE $18 vs Guests gate price