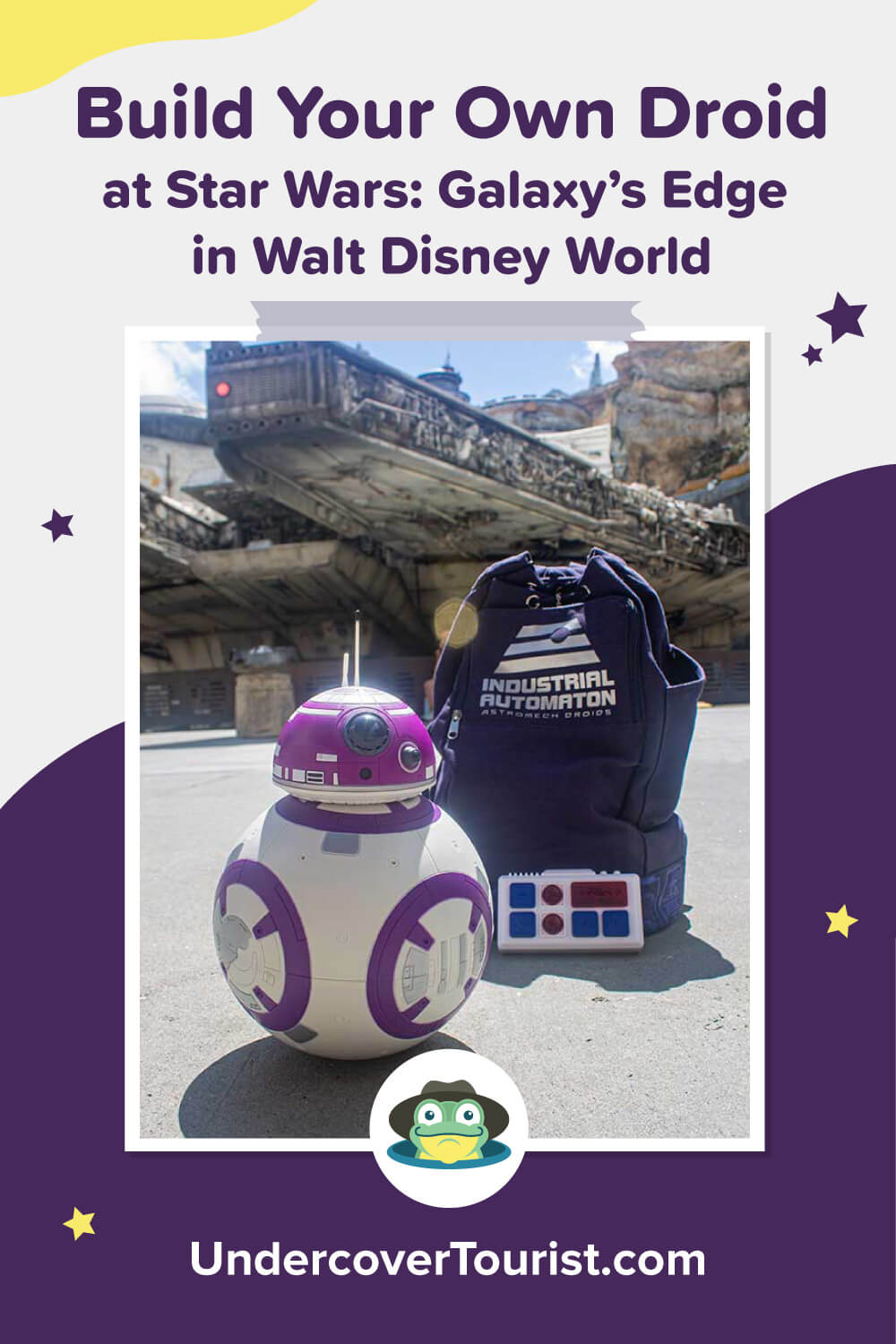 ‘Sup! Tad here. Some of my favorite characters from the Star Wars movies are the droids who accompany the main heroes on their galactic adventures. Droids such as R2-D2 and BB-8 are the perfect sidekicks in a galaxy far, far away. Ever since I first saw the films as a young tadpole, I’ve always wished I had my own. So, you can probably imagine my excitement when I had the opportunity to create my own droid at Disney World’s Star Wars: Galaxy’s Edge! I named mine F2-0G ;)

Droid Depot isn’t just any ordinary store. It’s where you can build your own droid at Galaxy’s Edge in Disney World. This is just one of the many toadally rad experiences you can find on the planet of Batuu. The droids even interact with certain elements while you’re inside the land. If you’re a "Star Wars" fan like me, you won’t want to miss out on this experience. Here’s everything you need to know.

Making Reservations to Build Your Own Droid at Galaxy's Edge

Even after two years, Star Wars: Galaxy's Edge continues to be a hoppin' place. You may experience lengthy wait times for the attractions, restaurants and shops. Disney highly recommends making a reservation for Droid Depot, which can be made up to 60 days in advance on Disney's website or through the My Disney Experience app. Droid Depot may be able to accommodate walk-ins each day, but it's subject to availability.

The build-your-own-droid experience costs $99.99 per builder and includes choosing your own pieces, putting the droid together and taking the droid with you with a box and remote control. A valid credit card is required when booking, but won't be charged until arriving at the shop. If you need to cancel a reservation, you must do so at least one day in advance to avoid a $99.99 per builder "no-show" fee (this is the full cost of the experience!). It would be charged to the credit card that you provided when booking. Late arrivals may not be allowed to enter. Keep this in mind when picking a time! You'll need to account for the time that it takes to get to the park, go through security and the entrance touchpoints and walk to Star Wars: Galaxy's Edge.

The experience is also limited to the builder and one guest. At least one person must be 14 years old or older. If this experience is high on your must-do list, we recommend snagging a reservation if one is available. However, don't fret if you aren't able to get a reservation. Arrive early in the morning or late at night as these are the best times for walk-ins. Most Batuu travelers build their droids in the afternoon (noon to 3 p.m. is a peak period for this experience, according to one of the cast members).

Finding Droid Depot and Checking In 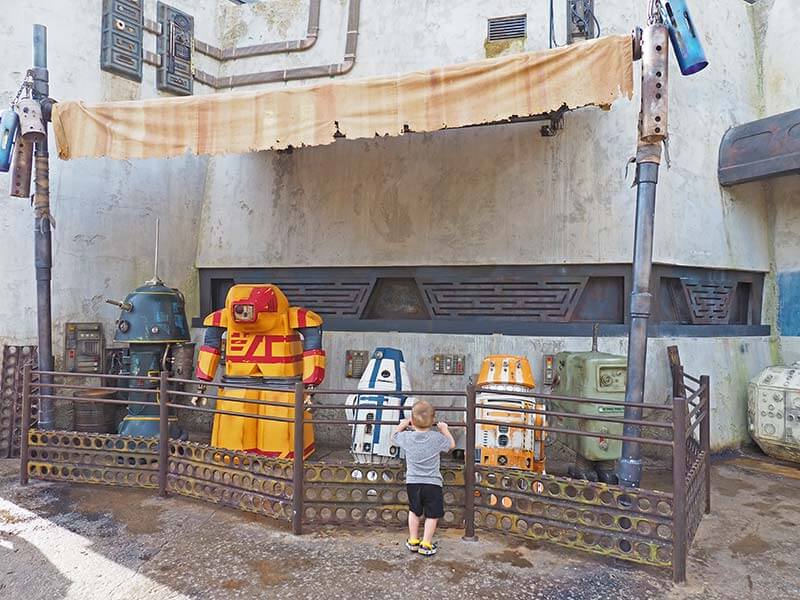 If you enter Galaxy’s Edge by Toy Story Land, Droid Depot will be one of the first shops you’ll see. It’s right next door to Savi’s Workshop, which is where you can build your own lightsaber. If you come from Grand Avenue, stay right past the Black Spire Marketplace until you reach the bottom of the stairs. Despite all of the signs being written in Aurebesh, it’s pretty easy to spot the store because there are audio-animatronic droids lined up outside.

If you have a reservation and need to check-in, you should get there no earlier than 15 minutes before your reserved time at the check-in location in front of the store. Each person in your party must be present upon check-in and entering Droid Depot. Be prepared to show your reservation confirmation, photo ID and the credit card that you used when booking. Once again, if you do not cancel the day before and do not show up, you'll be charged the cancellation fee. If you're late, you may not be allowed to enter and have to face the "no-show" fee.

It’s a bit overwhelming as you walk inside! There are droids of all shapes and sizes everywhere. Some even move around in the background or on the walls. Be sure to look up high and down below, as lots of details are packed into this space. 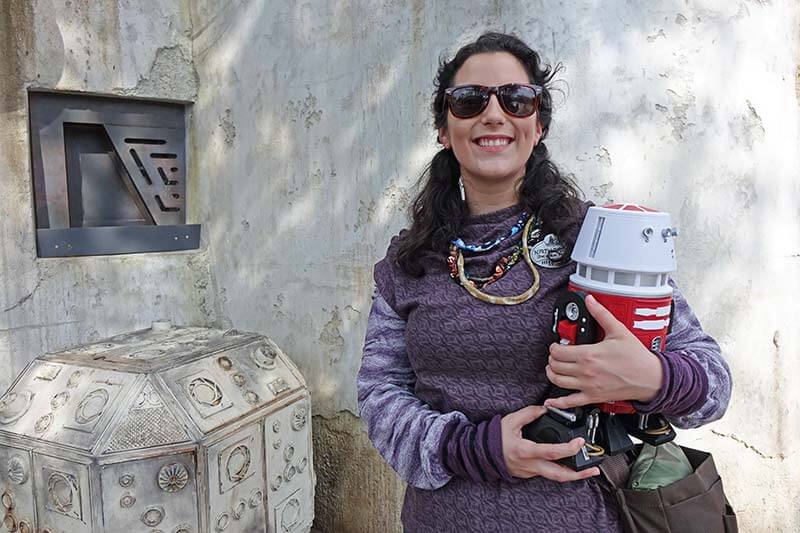 First, you must pick between the two styles of astromech units: the R-series (the classic R2-D2 style) or the BB-series (the newer BB-8 style). Once you make your selection, you will be given a blueprint with assembly instructions and a basket to put the parts in.

Each droid unit costs $99.99, plus tax. It comes with a special carry box and instructions. Once you’ve built your droid, it’s nonrefundable, as the people of Batuu believe the droid and its person pair for life. However, the personalized building experience is part of the price tag — and you've got a loyal friend for life. So, don’t rush through choosing your parts, and try to have an idea of what you want it to look like beforehand! There's a wall with all of the available options just to the left of the register. There are no discounts available, including the usual merchandise discount for annual passholders. For an additional charge, you can purchase personality chips for $12.99 each, as well as other various accessories, such as the droid backpack for $49.99. 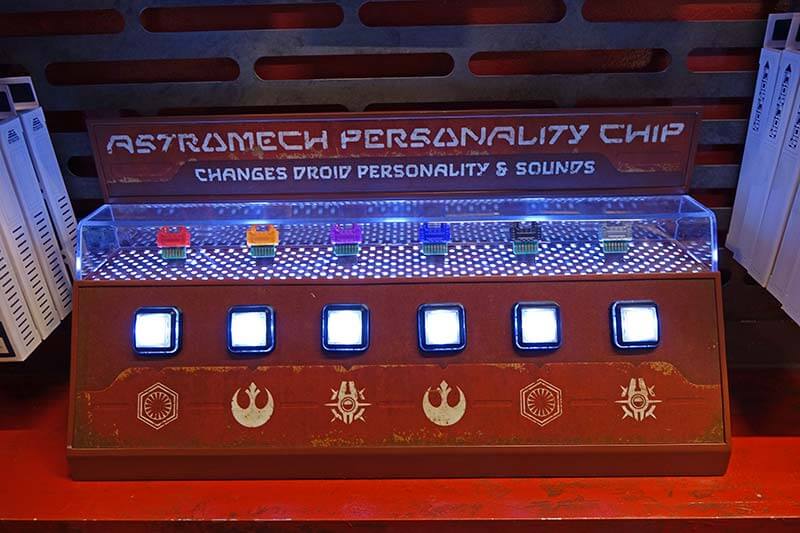 In addition to the regular build-your-own droid at Galaxy's Edge, Droid Depot also has model kits, pre-made and premium droids for sale. These range from small to larger authentic replicas of the droids from the films, such as D-0 from "Star Wars: The Rise of Skywalker." 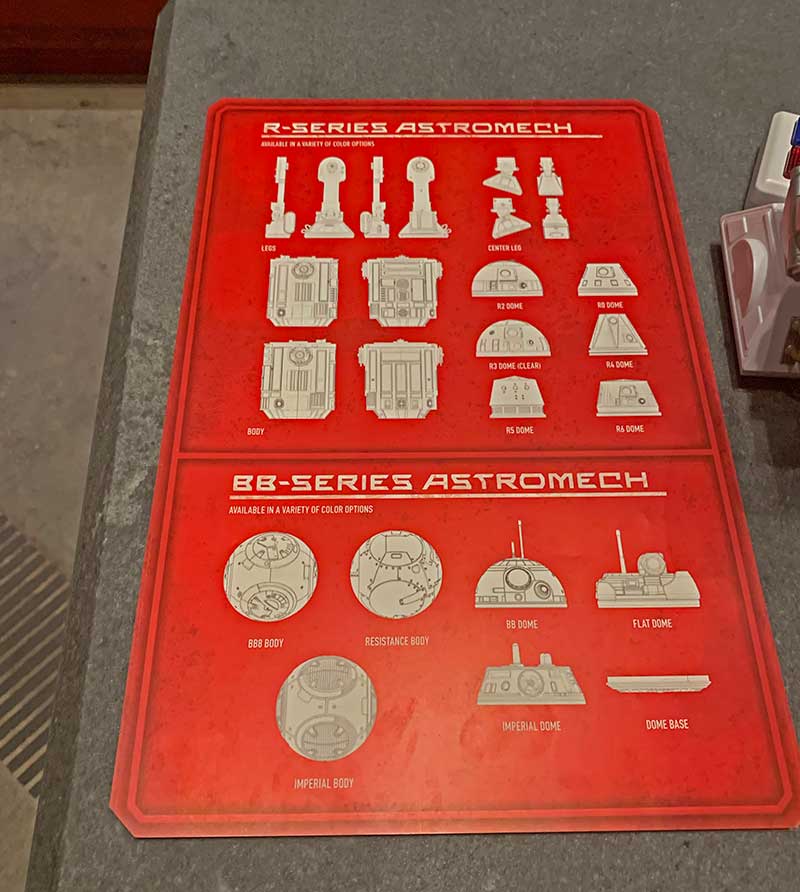 Once you’ve paid, it’s time for fun! The process is basically split into two stages: the parts station and the building station.

These parts come in various styles and colors, so you can mix and match however you please. Just make sure you’ve got each of the four main parts! For easy selection, they move down a conveyor belt. If you miss something or change your mind about a piece, you can put it back on the belt and wait until another comes back around.

After you've selected all four parts, you'll bring your basket to the building station where a cast member will assist you. You'll follow instructions on your placemat or the digital monitors to assemble the parts in the right order. Once it's completed, your droid will be paired with a remote control and activated! It was toadally cool watching my droid, F2-0G, come to life. 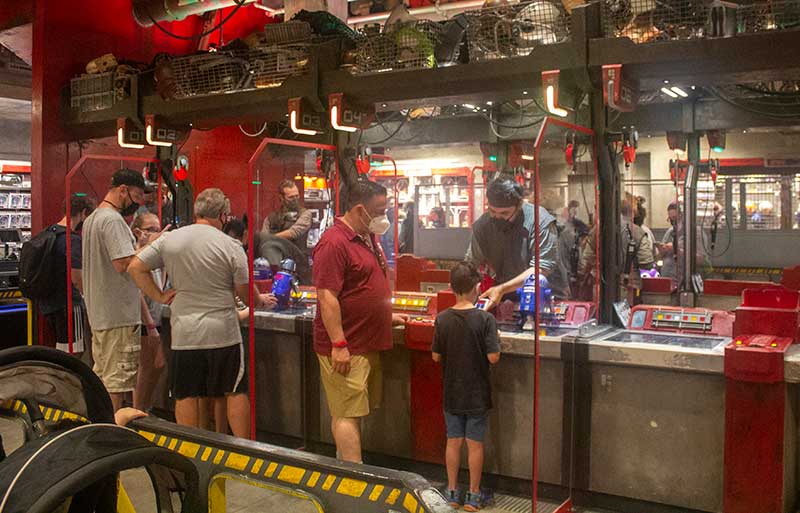 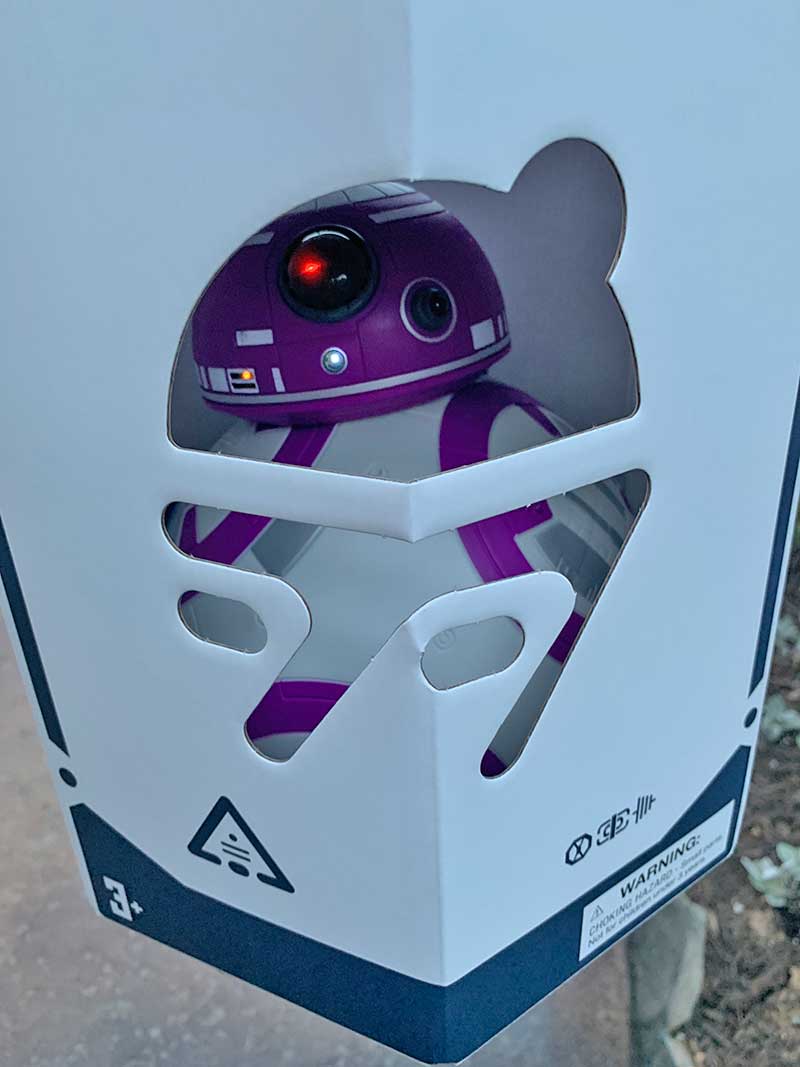 These customizable droids use Bluetooth technology to communicate with other astromech units, as well as other elements and objects on Batuu and at Disney parks and resorts. Using the remote control to operate a droid while at the theme parks is generally not allowed due to safety, but you can carry it around in its box or bag so it can interact with these elements in the land and other droids.

After we walked out with F2-0G in its box, we noticed it started to make noise when we passed by the droids outside of the shop. F2-0G also started beeping and chirping around the Millennium Falcon. We chatted with a Batuu resident (cast member) who mentioned that droids associated with the Resistance will have negative reactions to The First Order. Sure enough, F2-0G started to make noises around the TIE fighter.

However, if you're spending more time in the park and don't want to carry it around with you, you can send your droid to your Disney Resort hotel if staying on-site or held at a designated location near the Hollywood Studios main entrance for convenient pick-up as you exit the park. Just let the cashier know at the time of purchase (this service may be temporarily unavailable). 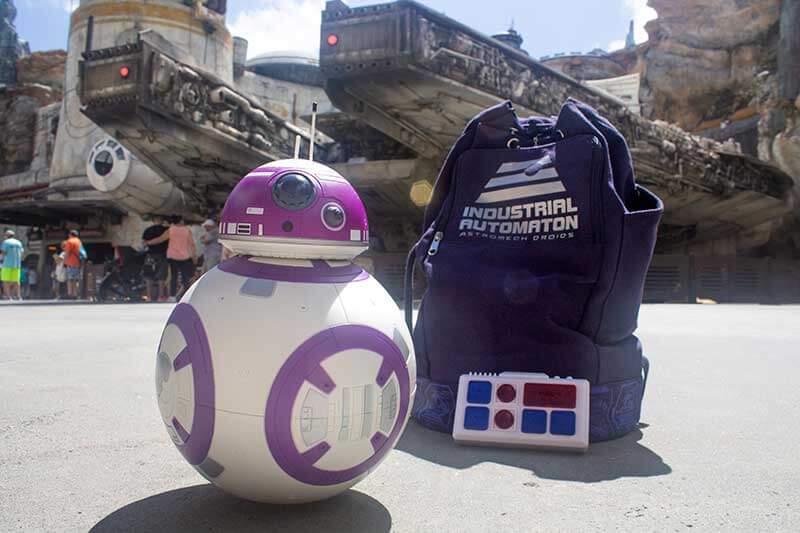 Would you rather build a BB-series or an R-series droid? What would you name it? Let us know in the comments below!