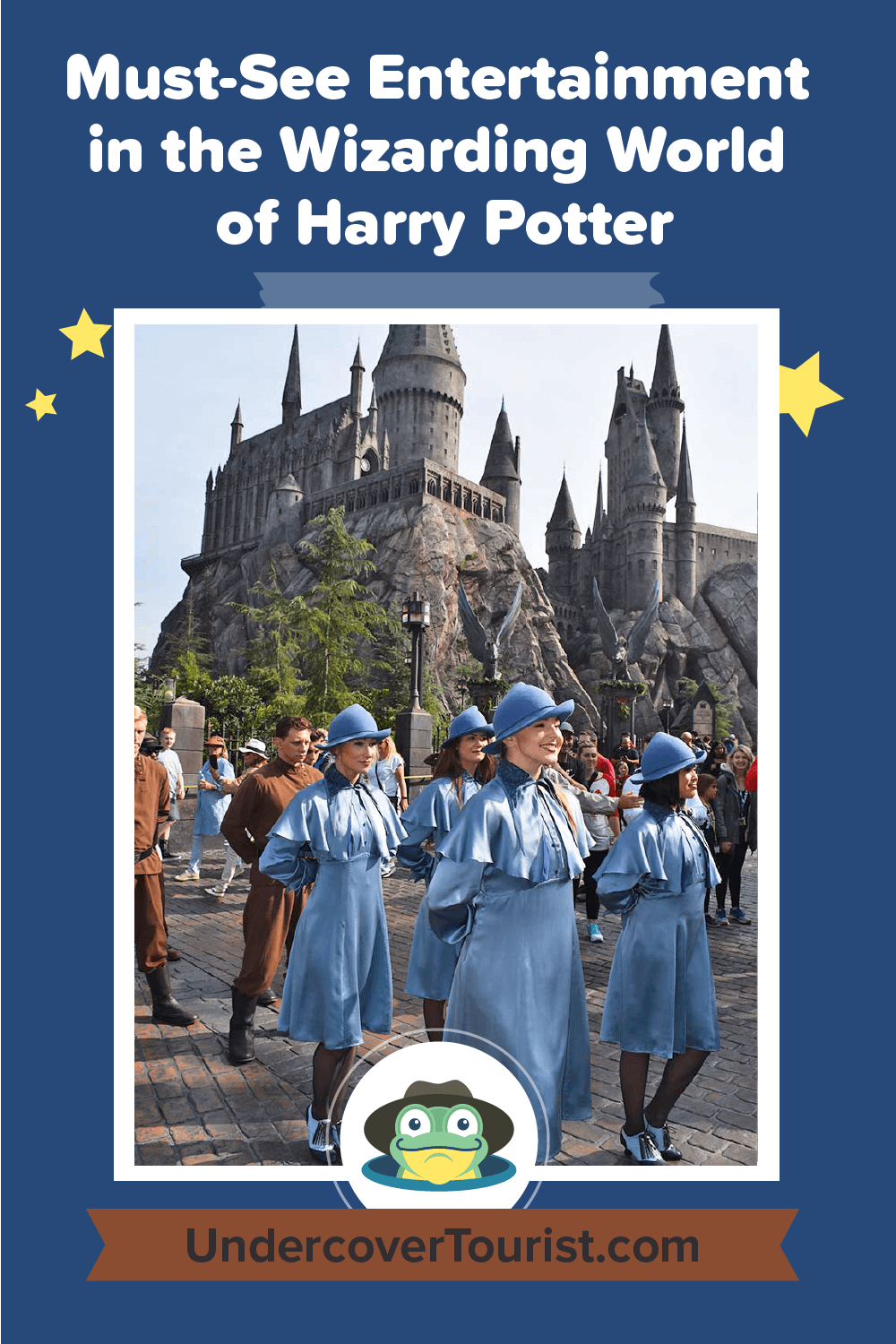 The entertainment in The Wizarding World of Harry Potter at Universal Studios Hollywood is made up of two stage acts, a wand pairing demonstration and a nighttime projection show. These are the performances we do not want to miss when we visit the Wizarding World! Here's how to find this enchanting entertainment.

Witness a Wand Pairing at Ollivanders 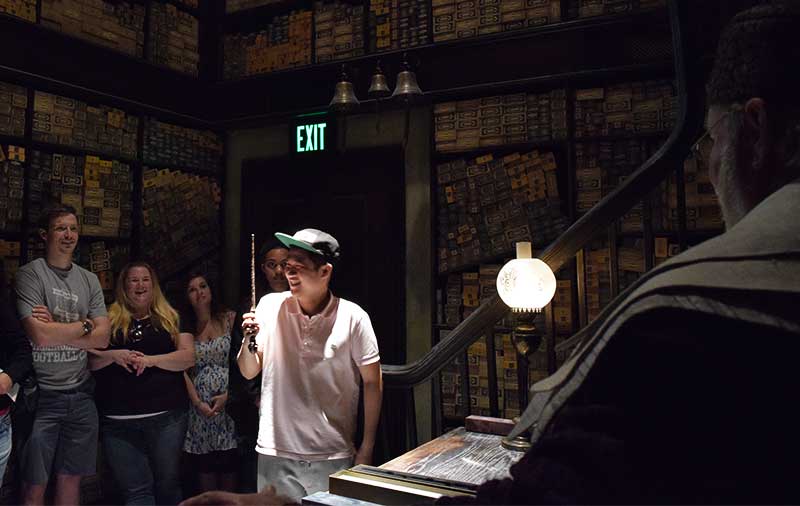 Wand pairing is a definite must-see attraction at Ollivanders, Makers of Fine Wands since 382 BC. But it does take a little strategy to find the shortest line for this Hogsmeade village attraction. The line always seems busiest in the morning, but it nearly disappears by afternoon or evening. So even if you visit the Wizarding World first thing, we recommend hopping back later to watch a wandmaker help a young witch or wizard find their first wand. You can keep an eye on the wait time for Ollivanders in the Universal app.

We like the interactive aspect of this magical experience because the wandmaker chooses a child or young adult from the small audience. The good news is that muggles (non-magical folk) are welcome here. You do not have to have any magical skills to use a wand in the Wizarding World at Universal Studios Hollywood! Tad is always dressed up in his Ravenclaw robes, hopping about and eager to be picked!

The wandmaker gives the chosen tadpole a few spells to try with different wands until they find that perfect wand for that wizard. The wand chooses the wizard, and a wizard will never get as good of results with another wizard’s wand. If the line is short, hop back in for another showing. There are a number of spells they can try, so each wand pairing is slightly different. Hopfully, someone in your group will get picked. You do not have to purchase the wand that you get paired with, but it is croakingly difficult to turn down a wand that chooses you. Just sayin' ... it's worth it to add a new wand to your trip budget in advance! Tad shares more about wands in his post on choosing a wand in The Wizarding World Hollywood. 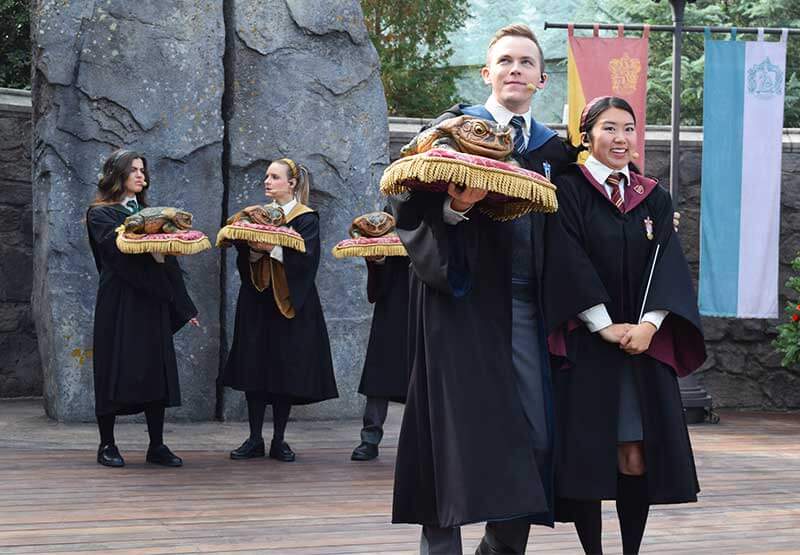 Here’s your chance to see Hogwarts students in uniform, one from each house! Members of the Hogwarts choir perform a few times a day on the Hogsmeade stage. You might recognize a few songs from the movies! Of course, they have their giant frogs on cushions croaking along. It’s a ribbiting performance, if I do say so myself. You can take a pic with the choir after the show.

Shows are usually late morning and early afternoon. You certainly don’t want to arrive too late. There are no time turners left to rewind time for you! It always seems if the show times are a mystery; we haven't had much luck finding show times in the app or the park boards. Instead, ask a wizard in the land for the Frog Choir's show times. Or, here’s a handy trick if you are planner like me who must catch her favorite froggy friends in action: Note this site: www.ushwaittimes.com. Look under "Music," and there you’ll see Frog Choir, as well as our next must-see entertainment in the Wizarding World, the Triwizard Spirit Rally. 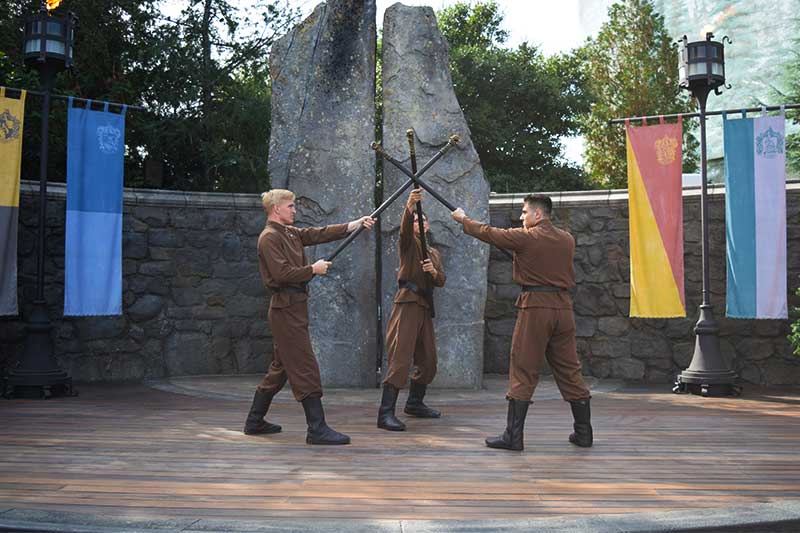 Have your read or seen the fourth book or movie, “Harry Potter and the Goblet of Fire?” If not, spoiler alert (skip ahead to the next section if you do not want to know anything yet — however, we promise that do not give too much away). In book and movie four, there is a Triwizard Tournament in which two different wizarding schools come to Hogwarts to compete with Hogwarts for the Triwizard Cup. Performed on the Hogsmeade stage, The Triwizard Spirit Rally introduces some students from these schools. You have the beautiful and graceful Beauxbatons and the strong and athletic Durmstrang students. A Hogwarts student introduces them, and they each show off their skills. It’s quite dramatic. Again, you can ask about show times or find them at the website above. And you can also meet them and take a picture together after the show! 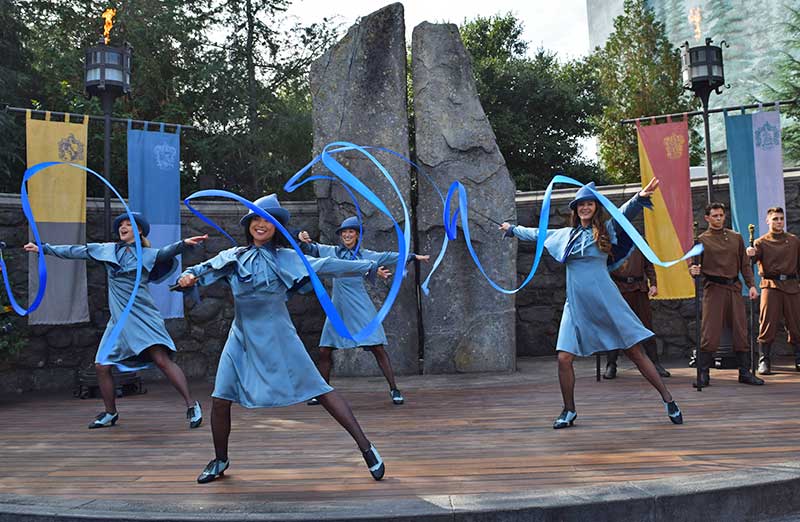 This show ends your visit to The Wizarding World of Harry Potter at Universal Studios Hollywood on a magical note. The event takes place on the exterior walls of the castle. With projection, music and special effects, the show is spellbinding. However, it only plays during certain seasons. You are more likely to encounter a show at peak times, such as summer and during Christmas at Universal Studios. The shows vary per season. We have experienced three different shows: The original Nighttime Lights at Hogwarts Castle, The Magic of Christmas at Hogwarts Castle during the holidays and The Dark Arts at Hogwarts Castle, which was introduced in 2019. 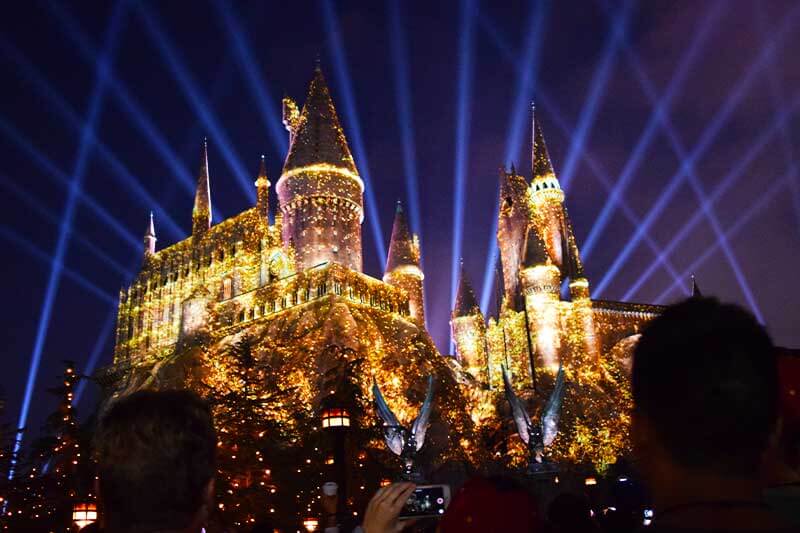 Shows begin once it is dark enough and there are usually several shows per night, depending on how late the park is open. You will not always see the show times displayed in park or on the Universal Studios Hollywood app. If they are in the app, sometimes you can find them listed under "Latest Park Updates." Again, you can ask in the park, or call the morning of your visit to get the show times. Hop over to Tad's post on getting the best view for the Nighttime Lights at Hogwarts Castle for viewing tips and even more hoppin' details.