Best Viewing of the Nighttime Lights at Hogwarts Castle 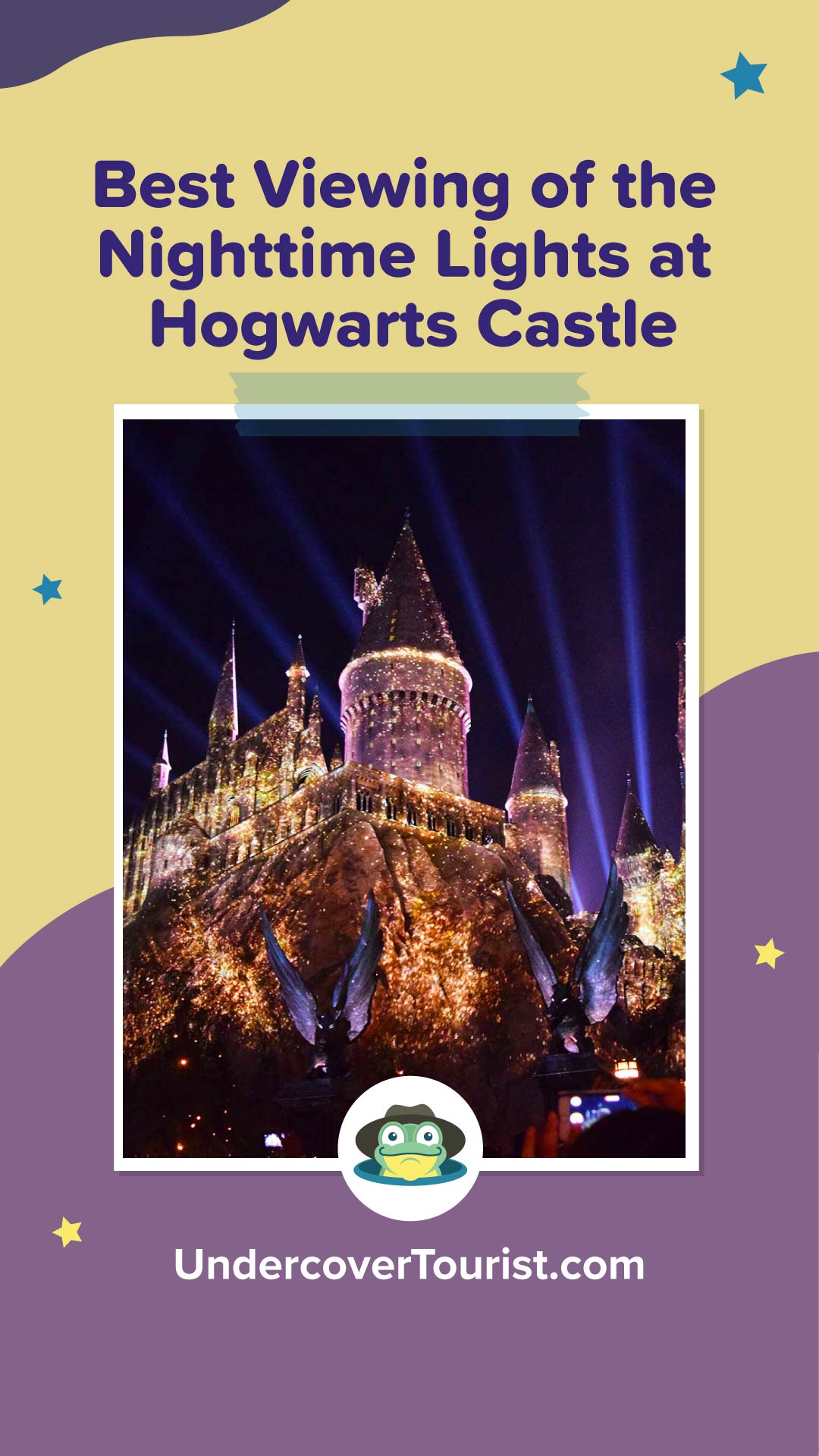 'Sup? Tad here. You know, before I turned 11, I dreamed that an owl would deliver my acceptance letter to Hogwarts School of Witchcraft and Wizardry on my birthday. I enjoyed imagining which of the four houses the wise old Sorting Hat would sort me into. (I identify as a Ravenclaw, BTW, and I would love to join the Frog Choir.) Of course, my acceptance letter never came, but The Wizarding World of Harry Potter did come to Universal Studios Hollywood that year and it's almost as good as the real deal. And at select times of the year, we get a taste of that magic in the Nighttime Lights at Hogwarts Castle show.

You can imagine the joy in our house when we got to once again experience Nighttime Lights at Hogwarts Castle this summer. The current show celebrates all four Hogwarts houses, Hufflepuff, Ravenclaw, Slytherin and Gryffindor. This is only one version of the show.

There are three version of the Nighttime Lights show. The show can vary depending on the season! In summer 2022, the original Nighttime Lights at Hogwarts Castle show is running nightly June 16 to Aug. 14.

Sometimes there is a show during spring break, and there is a show on select nights during summer. All of the Nighttime Lights at Hogwarts Castle shows have projections, music and dazzling lights. There's the original show, the holiday version and The Dark Arts at Hogwarts Castle show at Universal Studios Hollywood. The Dark Arts at Hogwarts unleashed the evil of the dark elements upon the castle with dramatic music, projections and special effects. 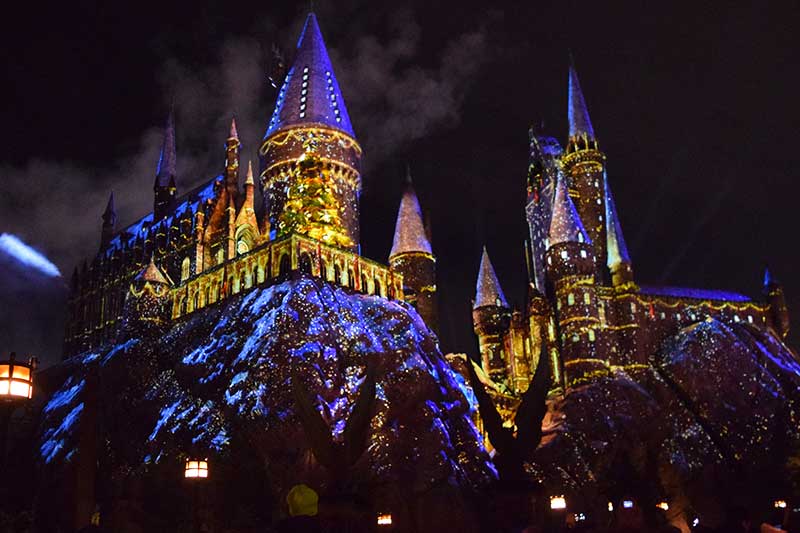 For our family, the Nighttime Lights provide the magical grand finale to a day in the park. Ending our night with the castle show is like the whipped topping on the Butterbeer or the fizz in the Fizzing Whizbees.

Best Viewing of the Nighttime Lights at Hogwarts Castle 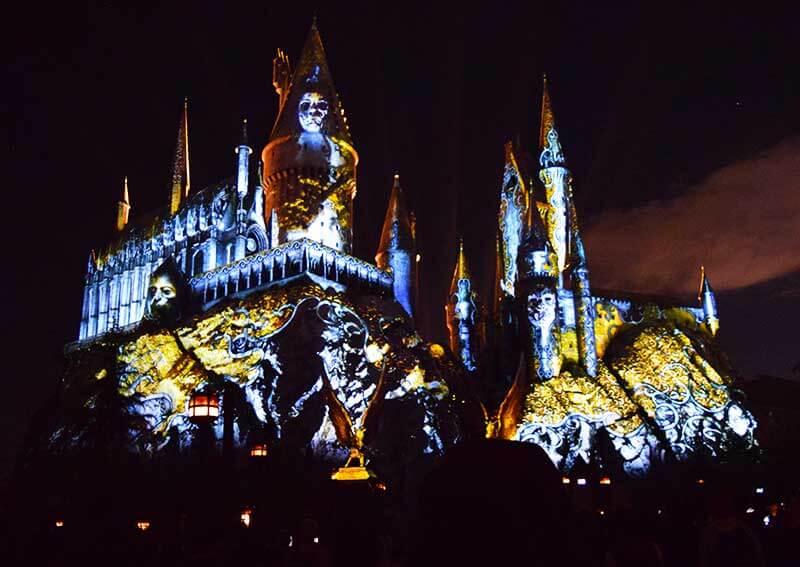 There are a few things to know about getting the best viewing and finding showtimes. The showtimes may vary each night, and your best source for showtimes is going to be a team member in a wizard robe. You can check the Universal Studios Hollywood app to see if the times are posted there. They often are not shown there, and Universal no longer gives out printed showtimes. You'll probably need to refer to in-park signage for exact show times.

The first show will usually begin once it is dark, and then the 5-minute show will run every 15 to 20 minutes. The number of shows per night may vary based on sunset and park hours. Often, if there are many wizards and muggles packed in for the first show, the audiences will get a surprise early start to the show! That has happened to us on more than one occasion, so be prepared for an early show if the area is full early. It’s magic so they can do what they want! We’ve experienced the surprise early showing during the Magic of Christmas at Hogwarts Castle show, as well, so it seems to pay to hop in place early. Mommy Frog always says, "The early frog gets the flies."

Where to Watch the Nighttime Lights at Hogwarts Castle 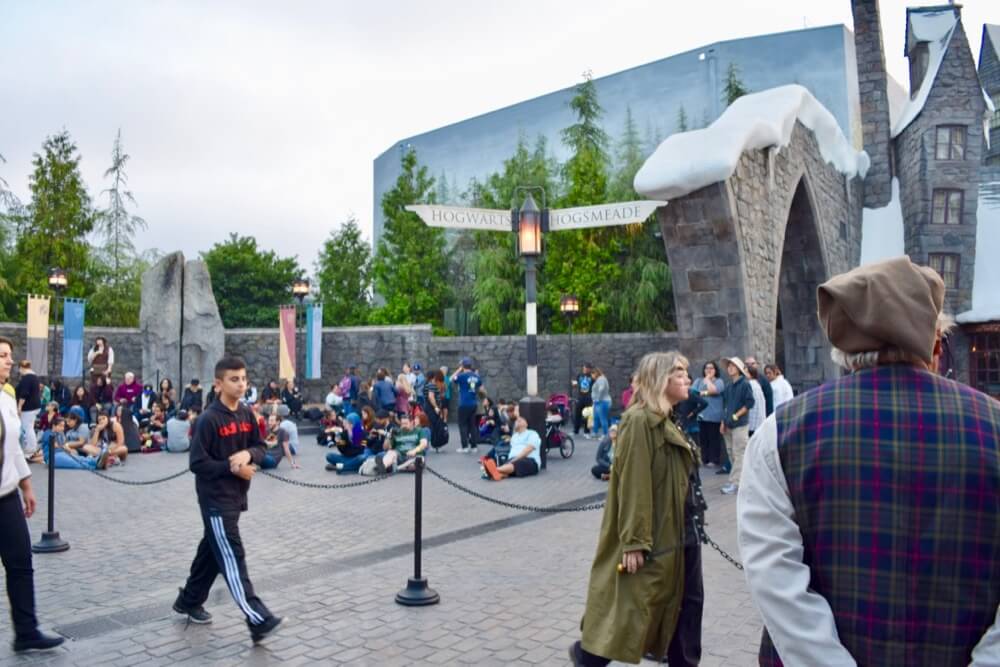 It is important to know where to watch the Nighttime Lights at Hogwarts Castle. It is surprisingly difficult to see the entire castle from anywhere in the park except the Wizarding World, so you’ll definitely want to watch the show near the castle with the proper sound and angles. The viewing areas are in front of the castle from the Hogsmeade stage area all the way past the entrance to Flight of the Hippogriff.

You do not need a front-row view for this show, and we do not necessarily recommend being too close. We recommend the viewing area that begins by the Hogwarts Street sign in front of the stage. The viewing area just past the Flight of the Hippogriff and across from the exits to Harry Potter and the Forbidden Journey is less desirable and almost too close for a good view. We tried a few spots out for size and found that we most enjoyed standing where you can see that broad left side of the castle and the winged hogs at the front gates of Hogwarts with a solid view of the face of the largest turret. 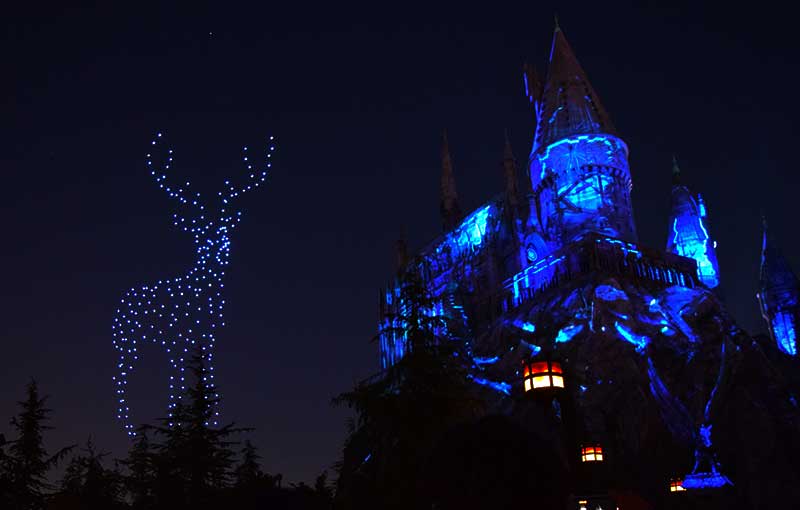 Not to give away any secrets, but you definitely want to stay to the left side of the castle, closer to the stage, for the Dark Arts show. Keep your eyes to the skies to the left of the castle at times for some special magic with that particular show. Expecto Patronum!

It does not take a magic wand — mine is Ash, in case you were wondering — to see this show because there are multiple showings. That really takes the pressure off for getting the right spot. And the good news is that there are not a lot of obstacles in the way. The show is pretty high up on the castle, so you don’t need to worry about seeing over people’s heads, either. And you can even plan multiple viewings into your night if once is simply not enough. OK, we watched it three times in a row, but we are diehard Harry Potter fans and can never get enough of the Wizarding World! 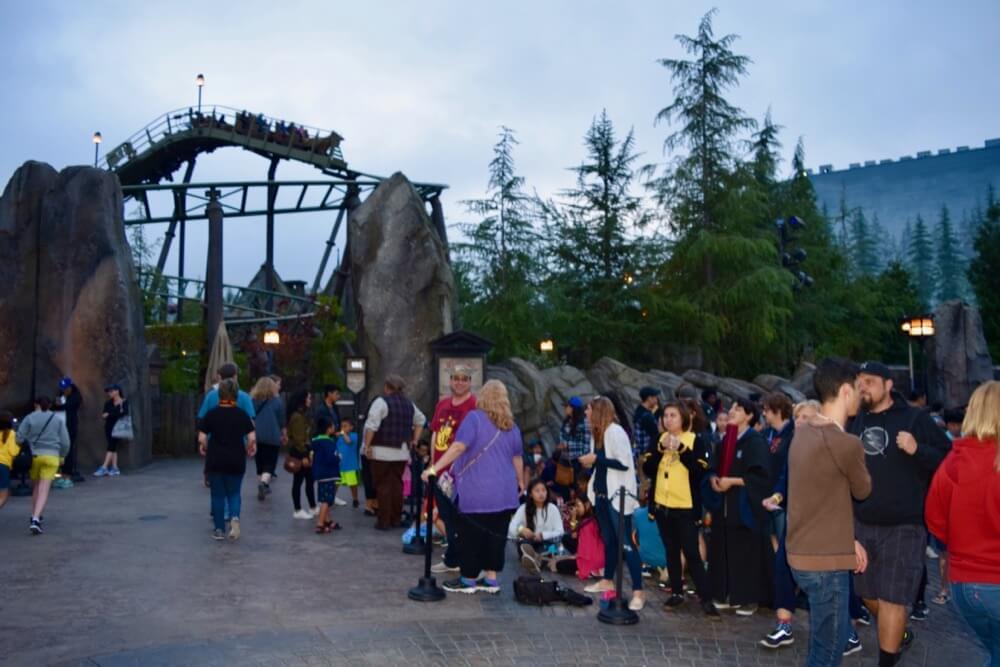 The first show will have the longest wait, with most guests camping out for their spot 60 to 75 minutes before the show. The steps of the stage and wall locations went about two hours before the show. Those are the only places you can sit while you wait. Employees will make everyone else stand to make room for more people. After the show, most of the crowd clears out and the next crowd moves in. Let’s say they have three or four shows in a night; you will find the smallest crowds during the third and fourth shows. It's easiest to secure a great viewing location for the later shows. If you can wait until a late show, you can hop in place as soon as the previous show ends. You’ll have a great spot 15 minutes before the show without all the waiting. Keep in mind that on nights where the park closes early, there will be fewer shows.

You can maximize your time at Universal Studios Hollywood by visiting other attractions while people camp out for the first show. But if you really cannot wait for a later show, keep your eye on the viewing areas at least an hour before the first show.

A Wizarding Word About Crowd Flow 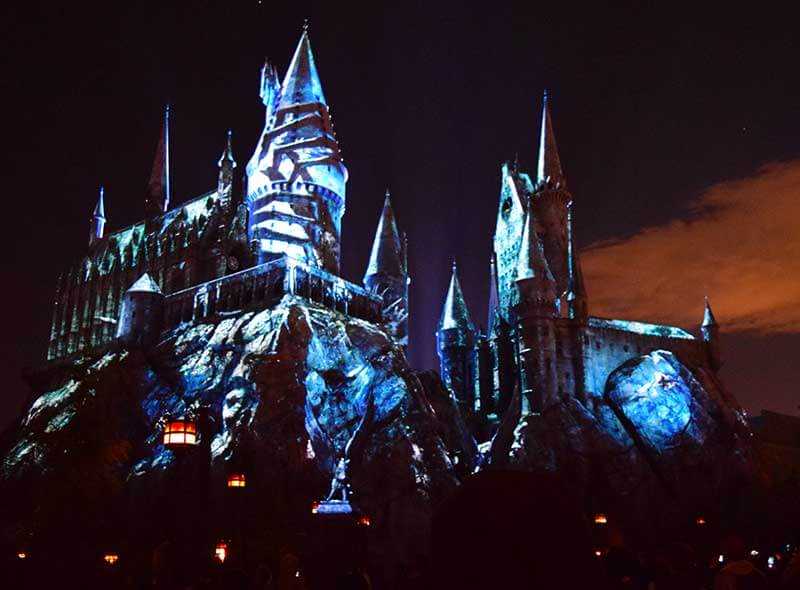 Before the first show, the crowd spills from the castle all the way through Hogsmeade, and even out of the main Hogsmeade gates into the rest of the park. You can enter Hogsmeade through the main gates near showtime. However, if the Wizarding World gets too crowded, they will temporarily stop letting people in until the show ends and people exit. The back route behind the buildings that lead to Springfield, USA will be an exit only — you cannot stand there.

Make the Most of Your Night in Hogsmeade 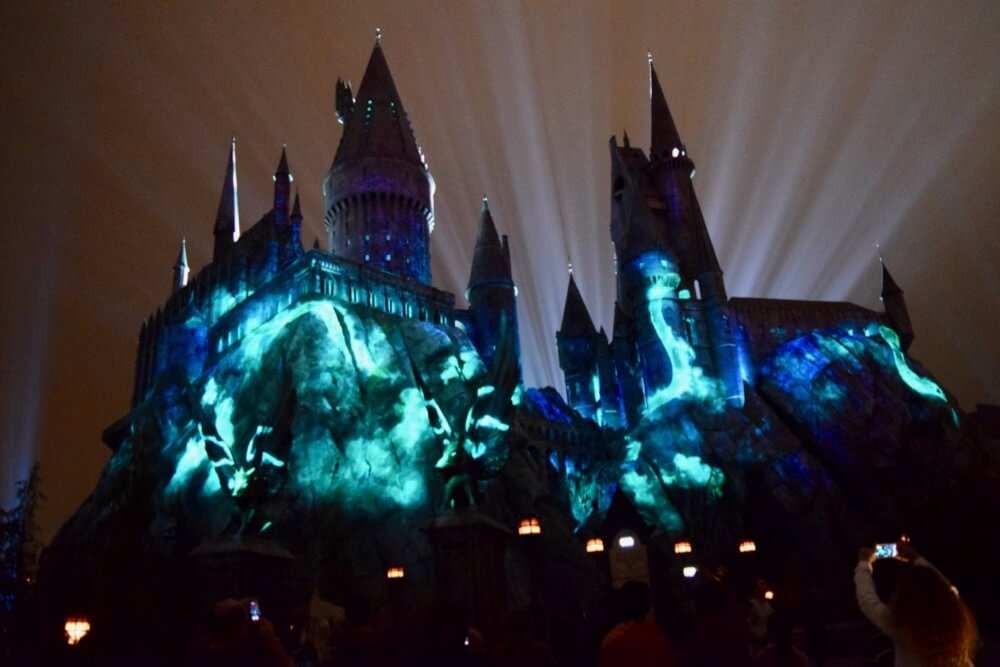 With the Nighttime Lights show giving you a reason to stay later in the park, you are bound to get hungry. Here’s our guide to the best food and drink in the Wizarding World. Plus you can do some shopping or spells to keep you busy until showtime. The rides remain open during the shows. You might wait in line for Flight of the Hippogriff to catch a glimpse of an earlier show. You can get a ride in before you get in place for your viewing. The evening is also the best time to catch a wand pairing at Ollivanders because the line almost magically disappears at the end of the night. Seriously, we walked right in at 6:30 p.m.! 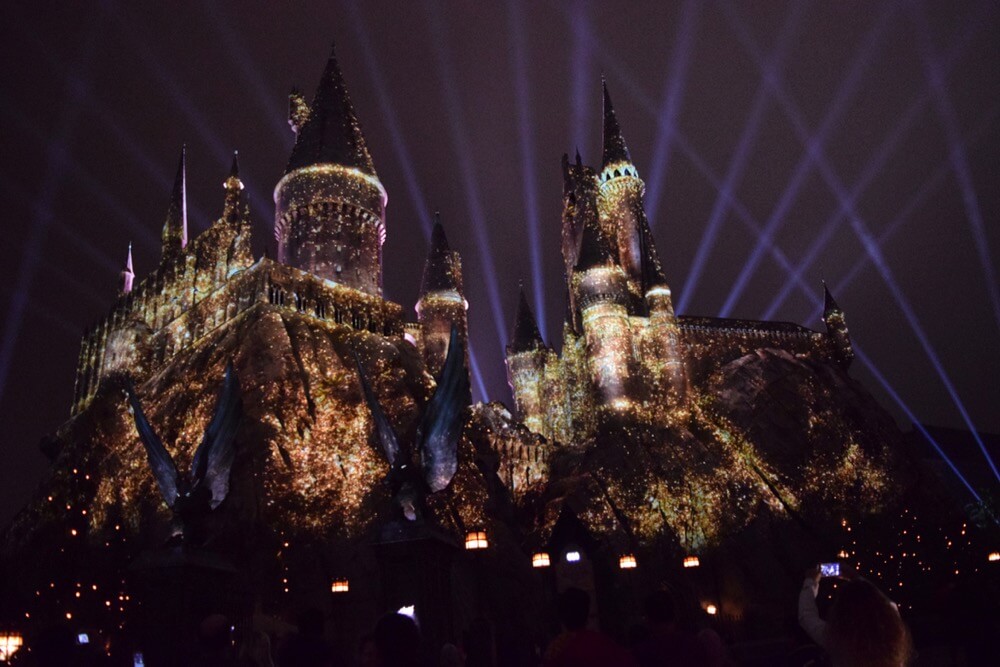 While it is sad to see this show disapparate when each summer ends, we then look forward to  Christmas in the Wizarding World of Harry Potter. The holiday-themed nighttime projection show — The Magic of Christmas at Hogwarts Castle — is just around the corner! It runs nightly through the holiday season, with multiple showings per night.

The Hogsmeade Village is decorated for the holidays, and you will be able to enjoy holiday foods and beverages. I can’t stop drooling when thinking of the hot Butterbeer and English Holiday Dinner. What tasty treats will this year bring? You’ll also want to hop over to experience Grinchmas on the same dates. Hop over to our guide to Christmas at Universal Studios Hollywood for more tips and details. There is so much sweet stuff to look forward to at Universal Studios Hollywood!

Headed to the theme parks in Los Angeles? We've got terrific discounts on Los Angeles attractions, including Universal Studios Hollywood, plus a ton of resources for your Los Angeles vacation planning.

Related: How to Manage Summer Crowds and Heat at Universal Studios Hollywood