Review of the Most Stoo-Pendous Grinch and Friends Character Breakfast

Leap's Note: Today's post comes from Undercover Tourist customer and super theme park fan Vern Woodruff. Vern has written about the Bibbidi Bobbidi Boutique, Universal's Photo Connect and the Jedi Training Academy. Today, he shares his review of The Grinch and Friends Character Breakfast from his visit to the Universal Orlando Resort in 2017.

As Seuss Landing becomes a wintry wonderland without peer,

For it is time to kick your Christmas spirit into high gear, 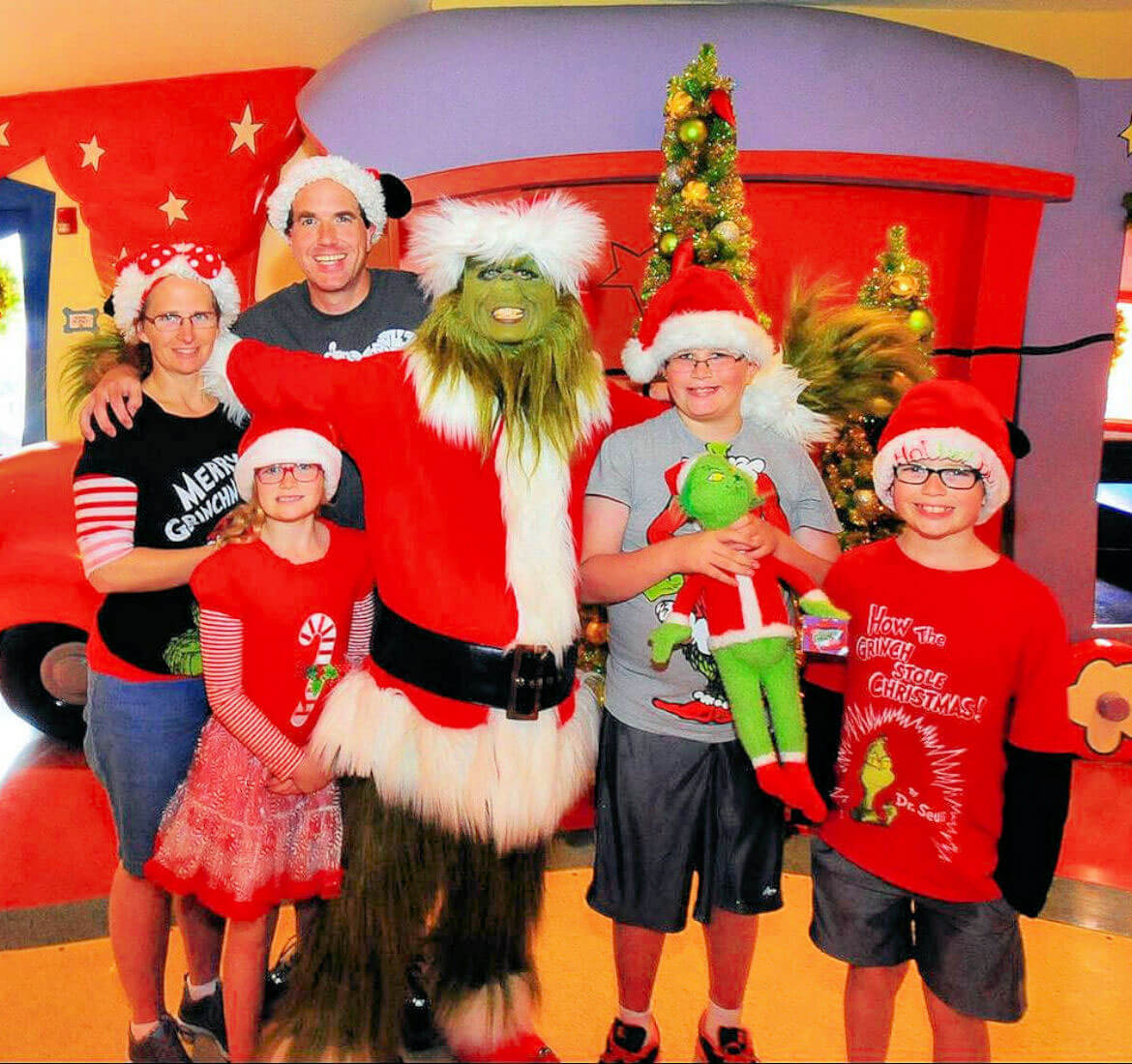 The holidays bring the opportunity to enjoy the special seasonal transformation of Seuss Landing into Grinchmas central at Universal’s Islands of Adventure in Orlando. And what better way to get into the Grinchmas spirit than by meeting the jolly green embodiment of all that is Grinchmas, the Grinch himself. The Grinch has meeting times during the day at the Gertrude McFuzz Fine Feathered Finery store in Seuss Landing, but if you want to start your day off with a touch of the Grinch, then the Grinch and Friends Character Breakfast is for you. 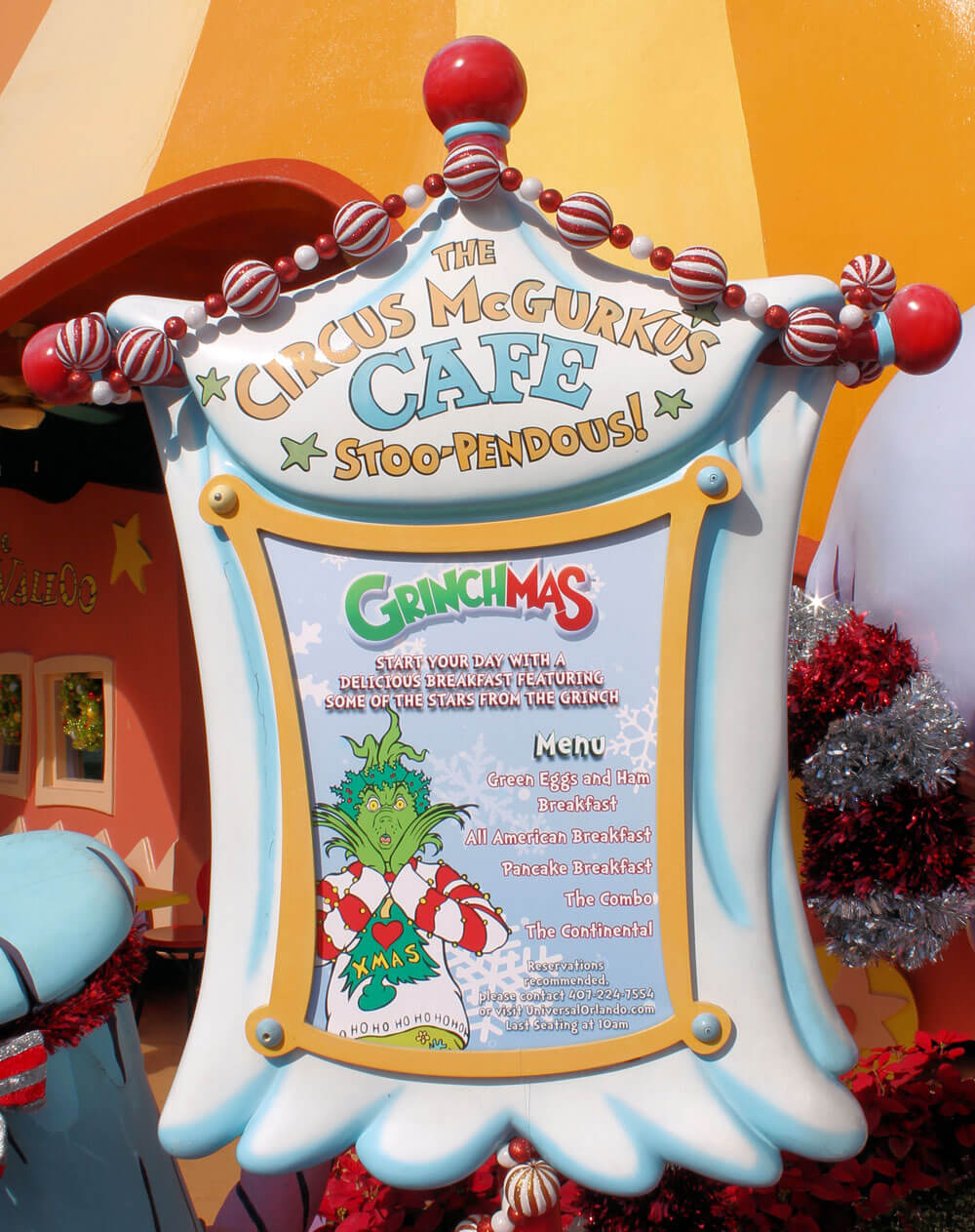 The breakfast is held on select mornings during Grinchmas with seatings between 8-10 a.m. at Circus McGurkus Café Stoo-pendous. The breakfast has menus shown, but they were just a guide because you could select what you wanted as you went through the serving line. A wide selection of food is available, ranging from green eggs and ham (of course) to sausage links, pancakes, tater tots, fresh fruit and breakfast pastries. An assortment of drinks is available too with free refills.

The Circus McGurkus Café Stoo-pendous was decked out in festive Grinchmas trimmings. After checking in and being seated, the first of several of the Grinch’s friends visited our table. A Who stopped by to welcome us and even took our drink order before our server made it to the table. After we had gone through the serving line, another Who bedecked with lights stopped for a visit. He was followed by a Who quartet that treated us to a carol. Later, the Cat in the Hat came by for a photo and autographs. Eventually the Grinch, dressed in his Santa attire, made it to our booth. My wife and I had moved out to take pictures, so the Grinch took the opportunity to grab a seat by my oldest son. The Grinch is one of his favorite characters, so he really enjoyed this interaction. After visiting briefly with the kids, the Grinch posed for a photo with all of us. He then moved on to bring Grinchmas cheer to others, but we were visited by another Who. The restaurant really put us in the Grinchmas spirit, and we really enjoyed our visit. 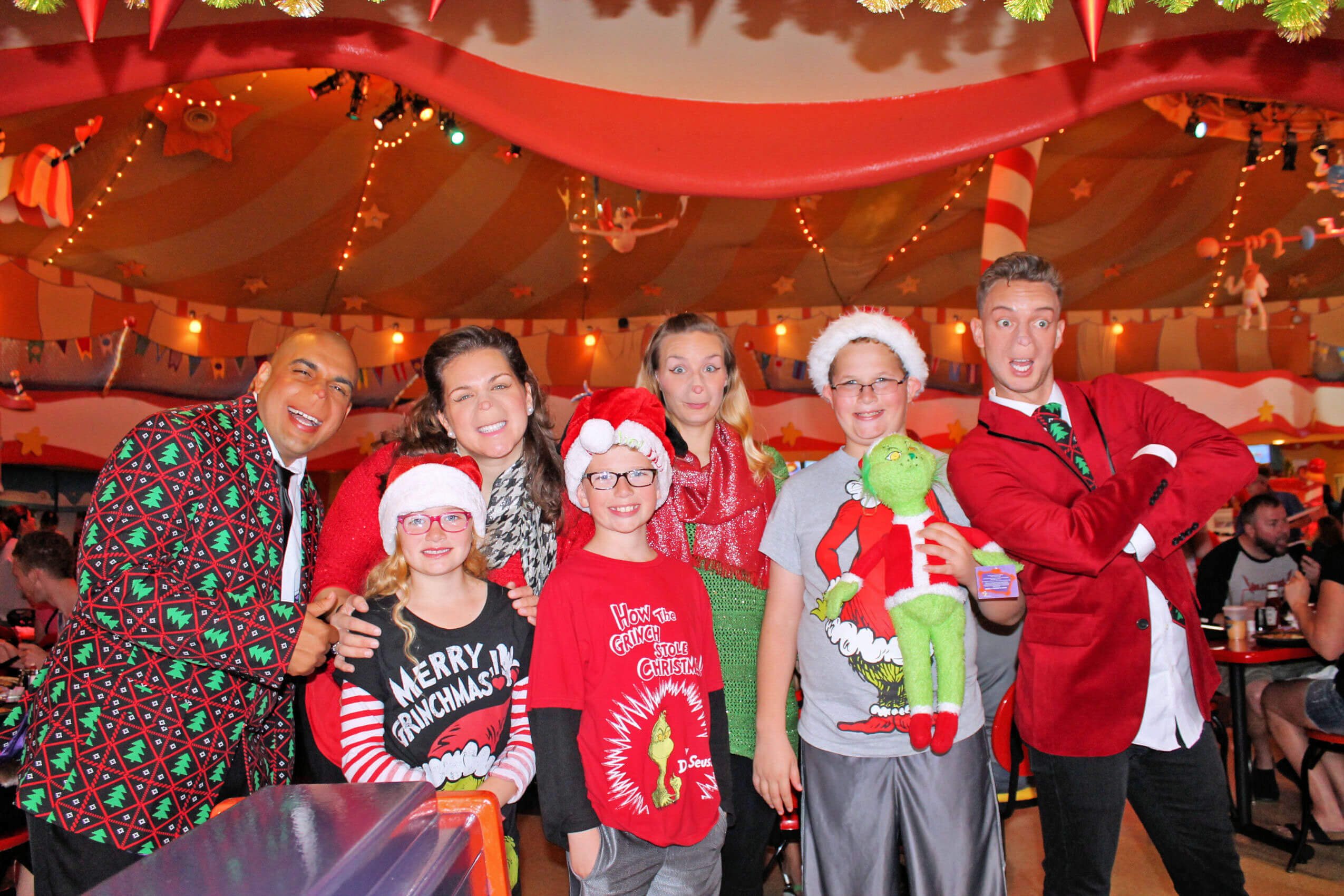 Mommy Frog's note: If you are interested in this holiday dining opportunity, the cost for 2019 is $34.99 plus tax for adults and $20.99 plus tax for children ages 3-9. You can learn more and book your reservation here. Reserve early because dates sell out quickly! 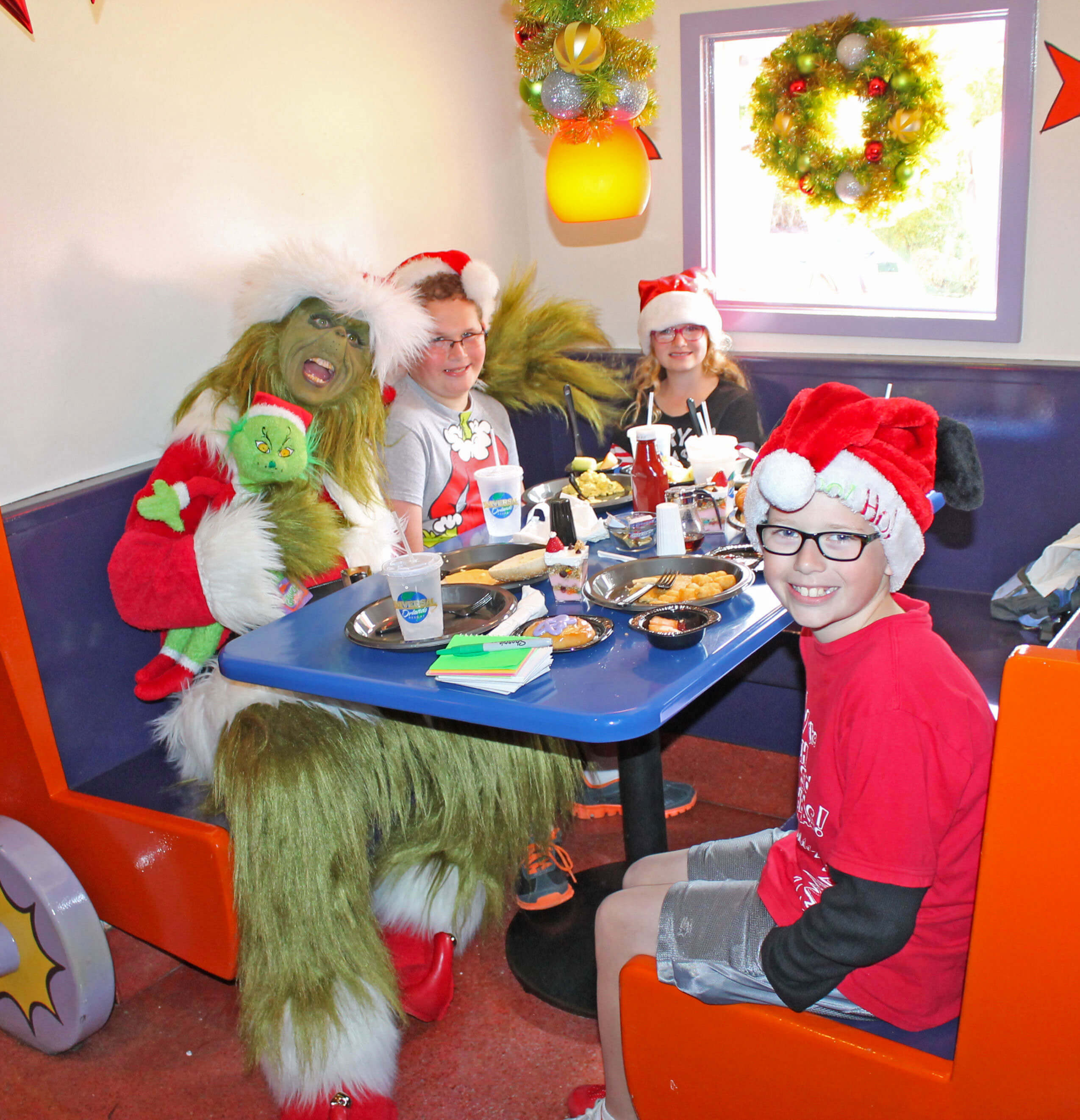 Ifyou're thinking about The Grinch and Friends Character Breakfast, I would suggest selecting a seating time earlier than 10 a.m. (the last seating). We selected 10 a.m. because we could enter the park an hour early at 8 a.m. since we stayed at a Universal Orlando Resort hotel. Also, I wanted a later breakfast so that we could fill up and not need to stop for lunch. While we had no problems filling up with enough food, our time for visiting with the non-Who characters was rushed. We did see the Cat in the Hat, but Thing 1 and Thing 2 left before reaching us. The late start also caused us some headaches with getting our souvenir photo. One of the perks of the breakfast was to be a digital copy of a picture with the Grinch through Universal’s Photo Connect. However, the photographer accompanying the Grinch left shortly after we arrived and had not returned when the Grinch visited us. We ended up staying in the restaurant a bit longer, finishing our breakfast when the photographer finally returned. We were able to pose for a quick shot with the Grinch, but I know other families missed this.

Another issue was that the Grinch was supposed to start seeing guests at the shop next door at 11 a.m. Due to this, the Universal character host that accompanied the Grinch continually tried to hurry him along and keep him moving from guest to guest as fast as possible. Fortunately for us, the Grinch did not move as fast as she wanted, so the kids had time for some fun interaction with him. I believe that he did eventually see everyone at the breakfast, but it was rushed. With an earlier seating time, we would have avoided that. For those who did not see the Grinch at breakfast, the line for meeting him at the bookstore was about 45 minutes when we left.

All in all, it was a great way to have breakfast and start our Grinchmas activities. My three kids really enjoyed it and we have some memorable video and pictures of the Grinch interacting with the kids. Please feel free to share any thoughts or questions below. Merry Grinchmas!