Our ~Frogtastic~ Guide to DisneyBounding 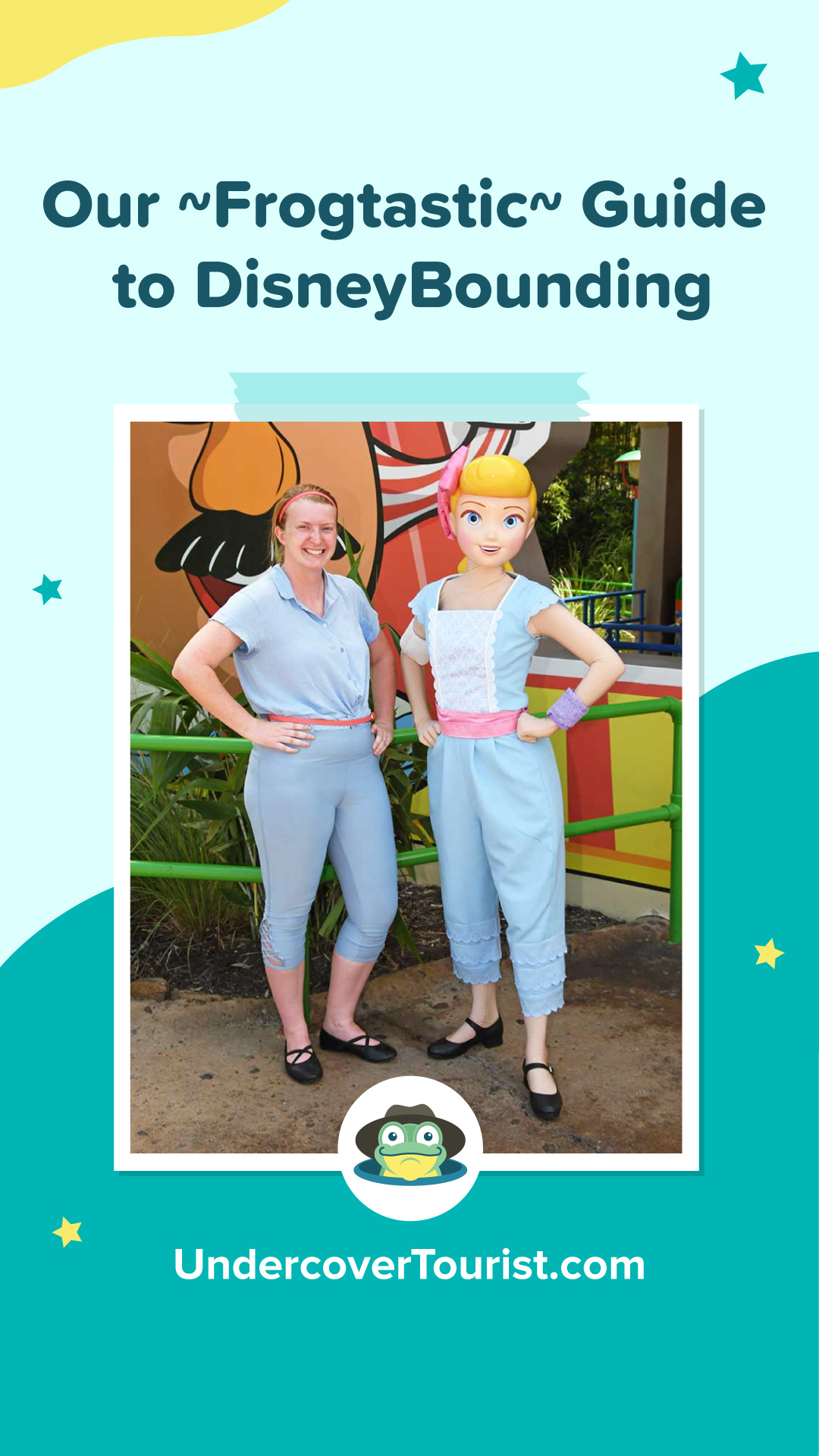 While you may have heard the phrase "Disney bound" in the context of someone bound for a Disney trip, did you know there is a whole other side to this term? DisneyBounding is dressing like a Disney character using regular clothes. It's a fun way to embody a favorite character without wearing a full costume. You can DisneyBound in everyday life, but it also adds a little extra fun when visiting any of the Disney theme parks.

Get excited, because March is the official DisneyBound Challenge Month! The official DisneyBound account will post a daily prompt for the entire month for people to interpret. It's fun to think about how you will tackle the 31 phrases and then see all of the imaginative ways that people live out those prompts. From "Pixar" to "Disney Pirates," there are a variety of creative ideas to choose from. You don't have to do all the prompts if you don't want to! I participated in the March challenge last year and did about 10 days (picking and choosing ones that I wanted to try). There are also prompts throughout the year, both from the official account and unofficial lists, so you can constantly be inspired.

Hop with us into the basics of DisneyBounding as we get ready for the March Challenge! 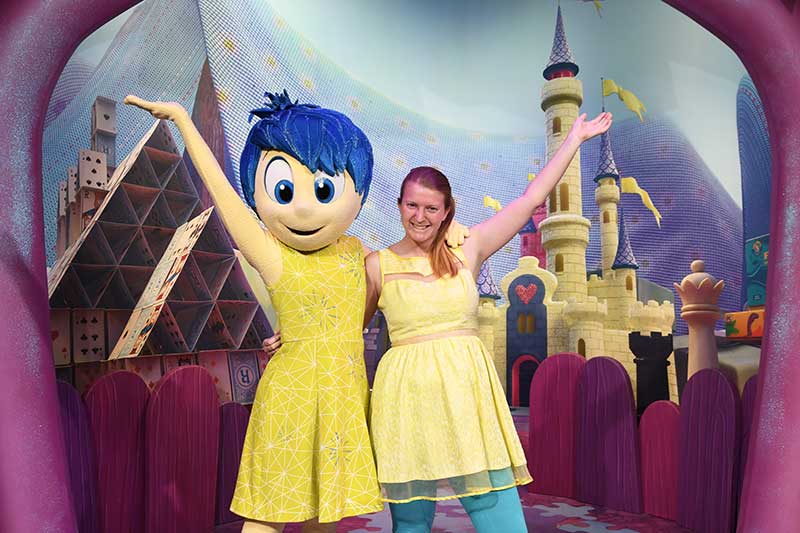 DisneyBounding is creating an outfit inspired by a Disney character. It's not wearing a full costume, but instead, representing a character through regular clothes found in your closet. For example, if you wanted to bound as Snow White, you could wear yellow and blue, with a touch of red. If you have a green outfit, you could style it as Peter Pan, Merida or even Pascal from "Tangled." There is no limit to the creativity that DisneyBounding provides.

DisneyBounding was first coined in 2011 by Leslie Kay, who wrote the book on this trend (literally, she wrote a book about it!). She is behind the official blog, which posts lots of Pinterest-esque style boards as examples of how to style a certain character. And the official Instagram account posts style boards, reposts of other bounds and prompts. There's great inspiration online as thousands participate in this magical trend.

DisneyBounding at the Theme Parks 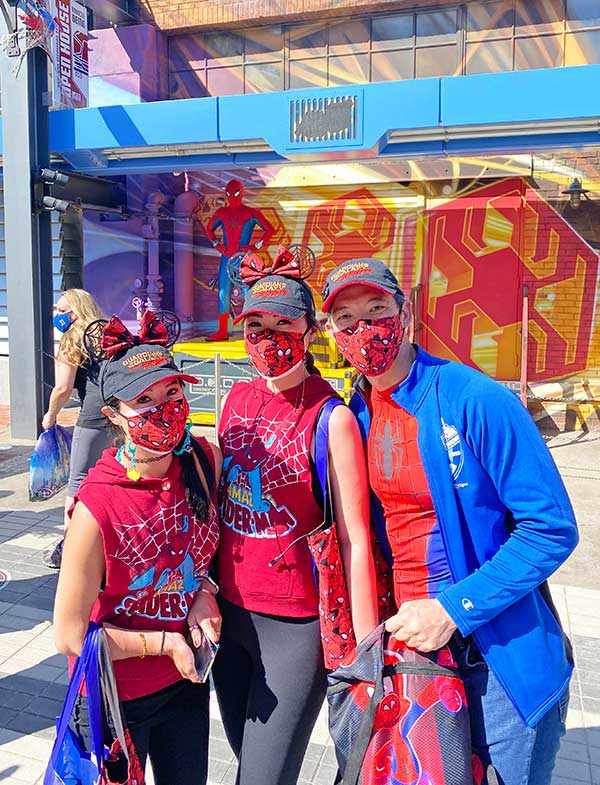 While the theme parks have rules on adults wearing costumes (except during certain special events, such as Disney World's After Hours Boo Bash event and Disneyland's Oogie Boogie Bash event), DisneyBounding is toadally OK! It's a fun and simple way to add extra magic to a trip. And what better setting for photos than the theme parks?!

The vibrant locations at the parks are perfect for a DisneyBound. From the iconic castles to the many countries in World Showcase at EPCOT, there are countless areas for a themed photoshoot. Immersive lands in the parks are especially froggerific places to wear a DisneyBound. Places such as Avengers Campus and Star Wars: Galaxy's Edge create the ideal backdrops.

DisneyBounding is also just a great way to show your love of a character. We love getting decked out from head to toe to fully embrace a character. Plus, you're surrounded by people who also love the characters, prompting fun conversations with other guests and cast members. 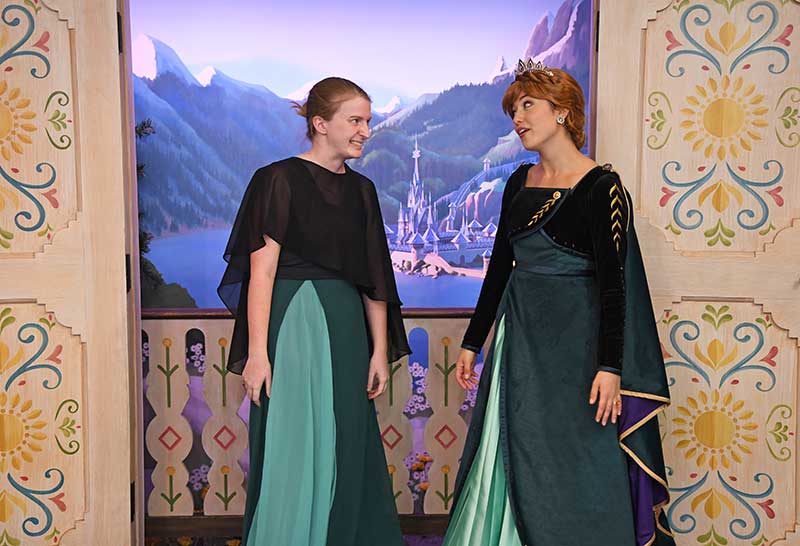 One of the rewarding aspects of DisneyBounding at the theme parks is seeing the characters' reactions. Characters will recognize you and help create a more in-depth interaction. The best part is if you're able to see the character you are bounding as. They love the fact that you're "twinning" with them and can create a very special memory. 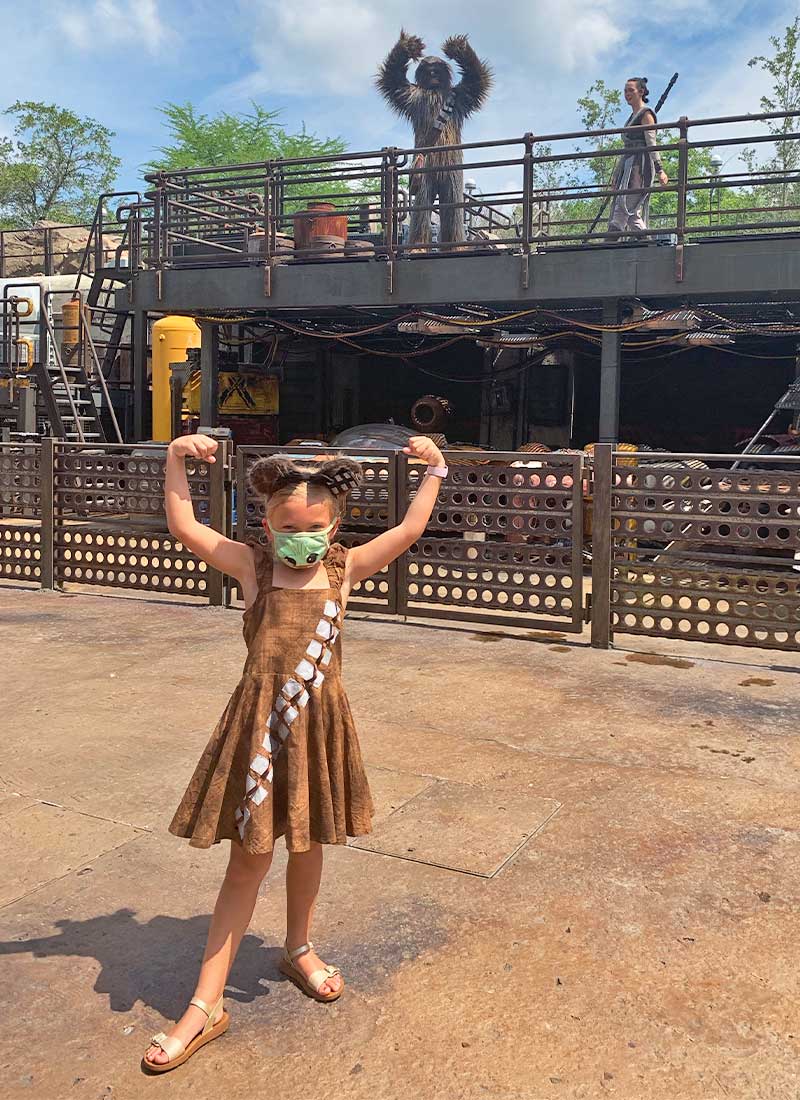 Star Wars: Galaxy's Edge gets its own special category because it opened even more doors for DisneyBounding. Being one of the largest and most immersive themed lands in Walt Disney World and Disneyland makes it an easy fit for this trend. Character sightings in the land allow for great interactions with fellow Force-wielders. The different landscapes of Batuu are perfect backgrounds for a "Star Wars"-themed photoshoot, especially if you have a lightsaber or droid.

The immersive land even prompted its own term, "Batuu Bounding." The fashion in "Star Wars" is toadally out-of-this-galaxy and is a great source of inspiration. People will create their own unique character who fits into the "Star Wars" universe. Similar to how the cast members can mix-and-match clothing pieces as if they are citizens at Black Spire Outpost, you can style your outfits as if you, too, live in a galaxy far, far away. If you think of many of the characters from the franchise, you might picture, for example, multiple layers, vests, scarves and boots. Depending on your persona's allegiance, you may be wearing earthly tones to fit in with the locals or all black to embrace the First Order. Cast members will speak as if they are actually "on planet" to varying degrees, but their interactions will often be more immersive to those bounding.

You don't need to be at the Most Magical Place on Earth, or the Happiest Place on Earth, to DisneyBound. You can use it as your everyday outfit (after all, it's from your regular wardrobe anyway!). It could be a bound that is more obvious to others or something subtle that only you know. Accessories are also a great way to add some Disney to your day. Most people who are posting photos of their bounds or participating in the challenges are doing so from their own homes, but that's what makes DisneyBounding so fun. The online community is a great way to stay connected and inspired! 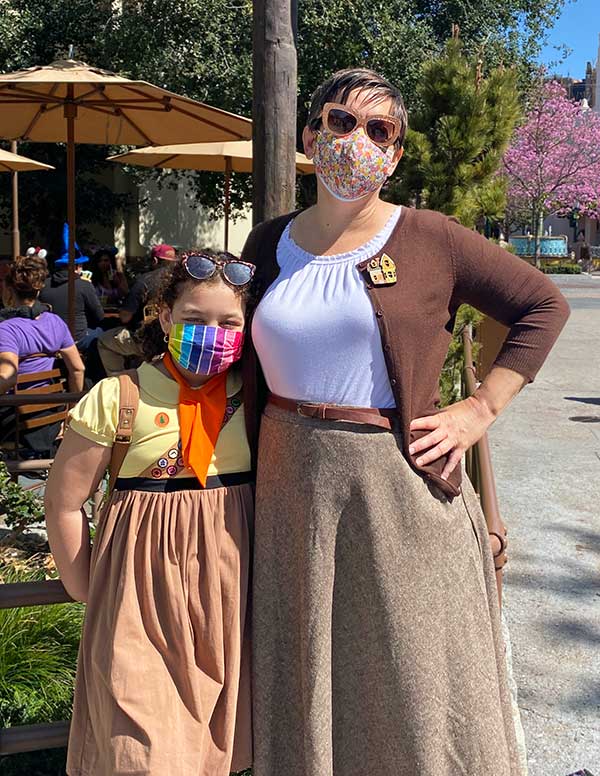 When wanting more inspiration for DisneyBounding, you can partake in fun DisneyBound challenges. There are all sorts of unofficial challenges throughout the year to participate in. The most popular DisneyBound Challenge hoppens in March, where the official DisneyBound account will have prompts for every day of the month. You can pick and choose what prompts you want to interpret into outfits. Feel free to post your photos and see what thousands of others came up with.

I've participated in a few prompts each year but have yet to do the full 31 days in the month (maybe this year!). Prompts can range from specific films or franchises to film eras such as the Disney Renaissance (think "The Little Mermaid" or "Beauty and the Beast"). It can also be vague categories such as colors or Disney sidekicks. If the prompt is red, you could go with a character who is red or who wears red. It's toadally up to you! One year, the prompt was "Disney birds" so I bounded as a porg from "Star Wars" (as best as a frog can be a porg ... ).

The March 2022 Challenge is already posted, so you can start planning out your bounds! The overall theme is Disney World's 50th anniversary, so the categories tie into Disney World in some way. Here's the March challenge if you want to give it a try:

DisneyBounding Is for Everyone 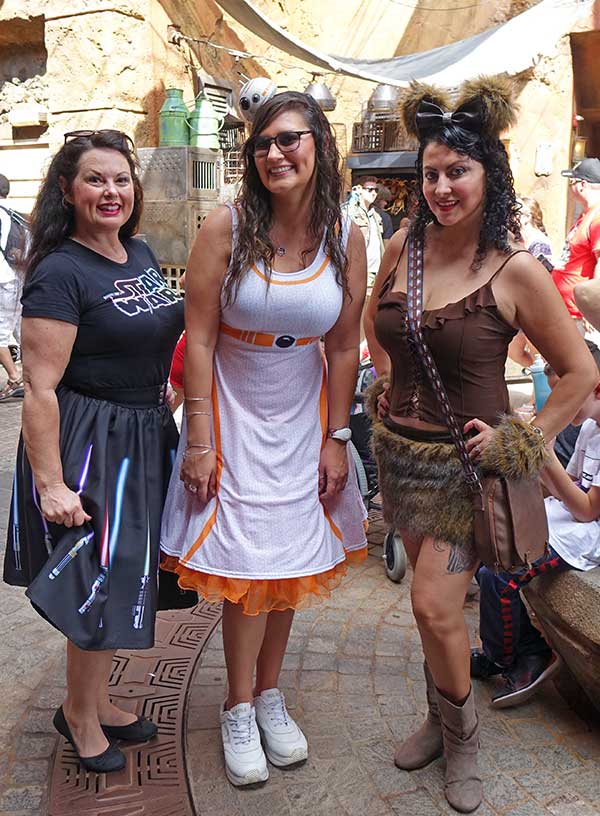 A great aspect of DisneyBounding is that it's for all ages, but especially for adults — it allows us to dress up and play pretend again! It is something that anyone can do and is a simple way to add some extra Disney fun to your life. It doesn't require going to the parks or buying tons of clothes (though once you start bounding, you can't help but think of characters when shopping). If you are traveling to a Disney park, why not go full out and create a bound for at least one of your days? Group DisneyBounds are even more fun, especially when using a theme. Movies such as "Toy Story" are great options for a family or group of friends to collaborate on. The possibilities can go to infinity and beyond!

Have you ever DisneyBounded before? Let us know your favorite bounds in the comments below!