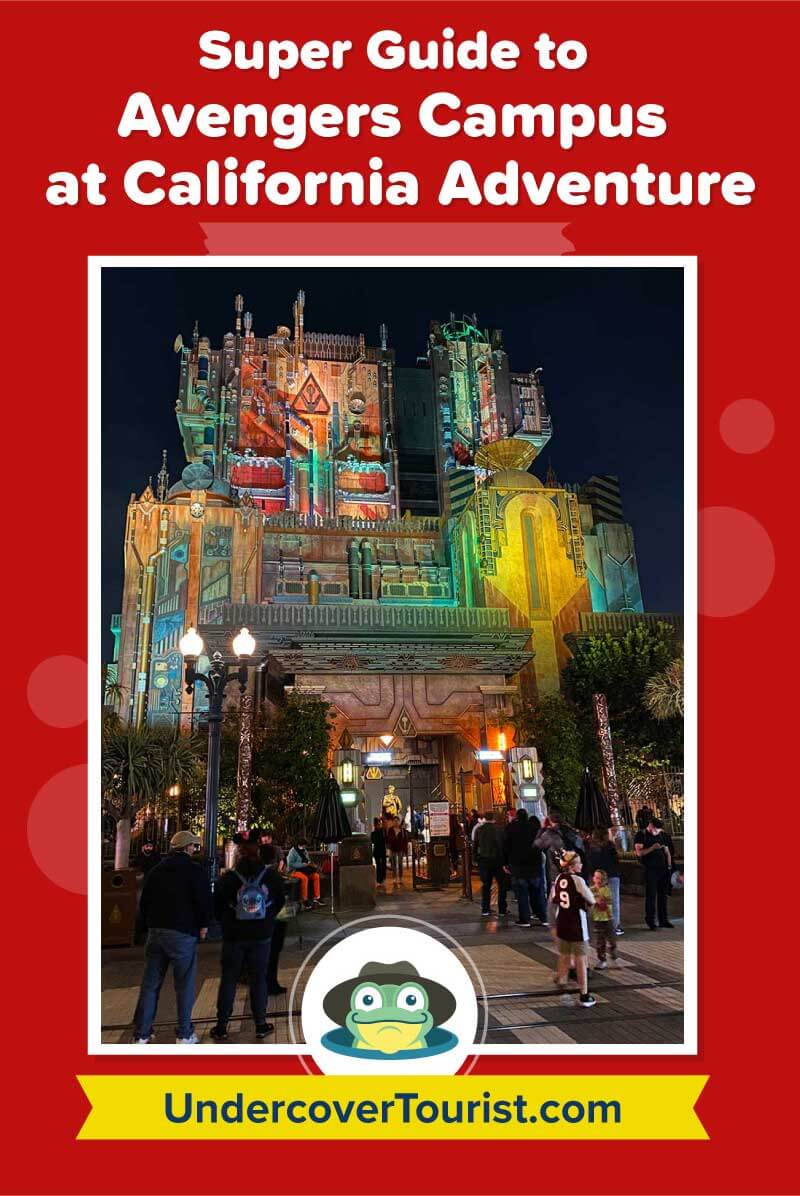 Sup? Tad here, Frog Family videographer and super fan of Marvel Super Heroes. I am super excited that Avenger's Campus, a brand-new Marvel Super Heroes land, is coming to to Disney California Adventure Park. Avengers Campus was projected to open July 18, 2020; however, due to COVID-19, Disneyland now says it's coming soon. You may have noticed walls surrounding the now-closed A Bug’s Land with the Stark Industries logo (from Marvel’s "Iron Man" movies) on the gates. Behind the fence, construction is already underway to bring us a whole new experience, as well as opportunities to join in the action ourselves. The new land, called Avengers Campus, will literally have Spider-Man swinging over the rooftops. Rad!

Our Super Guide to Avengers Campus at Disney California Adventure

You may have heard about the Hydra attack on Stark Expo in Hong Kong. That attack inspired the Avengers to set up new and unique headquarters around the planet to recruit and train the next generation of heroes. And thus, Avengers Campus was born! Sounds like a MARVEL-ous idea to me!

The new land will expand to seamlessly tie in the existing Guardians of the Galaxy: Mission Breakout ride (after all, they're Avengers too!). A new gift shop will welcome visitors to the campus from Hollywood Land. 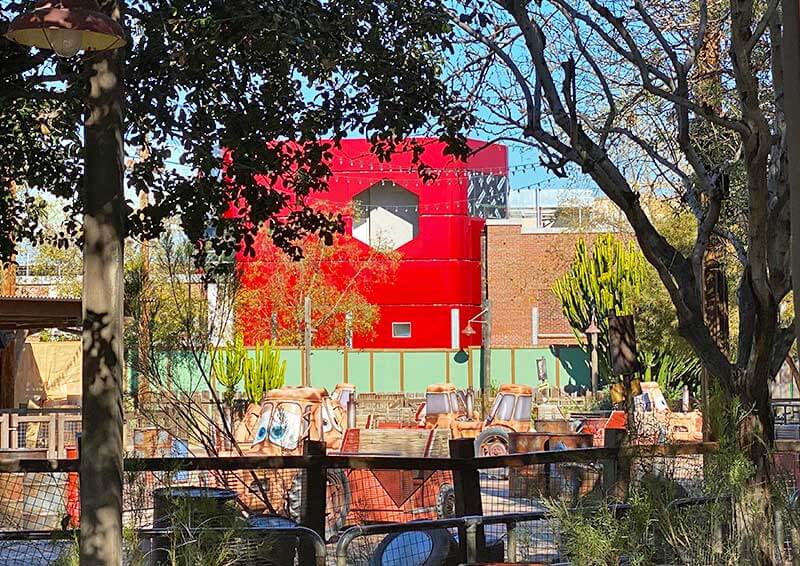 We're getting excited as we try to peek over the construction walls to see the progress of the new land. So far, the best view with the lowest walls seems to be next to Mater's Junkyard Jamboree in Cars Land. If only we had super powers to leap the fence to get a better look! Oh, Iron Man: Could you give us a lift? 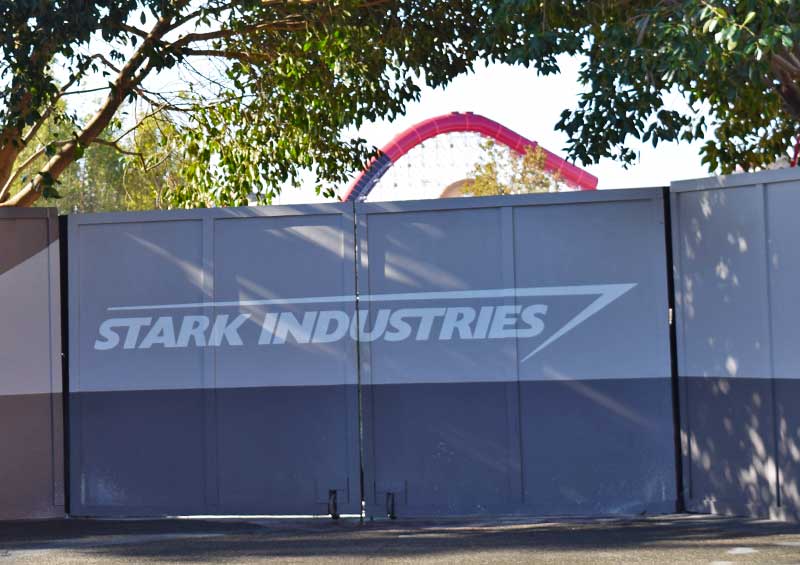 When Does Avengers Campus Open?

Avengers Campus will open in phases, starting with the Worldwide Engineering Brigade (WEB),  WEB SLINGERS: A Spider-Man Adventure attraction, Pym Test Kitchen, The Sanctum (a Dr. Strange experience), a store and the Avengers Headquarters building. In the second phase, Avengers Headquarters will house a new "E-ticket" ride. Phase One will open soon (originally scheduled to open July 18, 2020), while Phase Two's opening date is still TBD. We'll continue to update this post as we know more, so keep hoppin' back to stay on top of all of the toadally exciting deets!

We've already heard the awesome details of what aspiring cast members have to go through to work in the new land. Job candidates who made it to the interview entered a briefing room to learn about the mission. Then, they had to come up with a secret identity, create a backstory and use their super powers to break into the interview room! We know that the problem-solving skills, teamwork and passion for Marvel Super Heroes that came from this hiring process is going to create an all-around immersive experience for park guests.

What's Coming to Avengers Campus During Phase One? 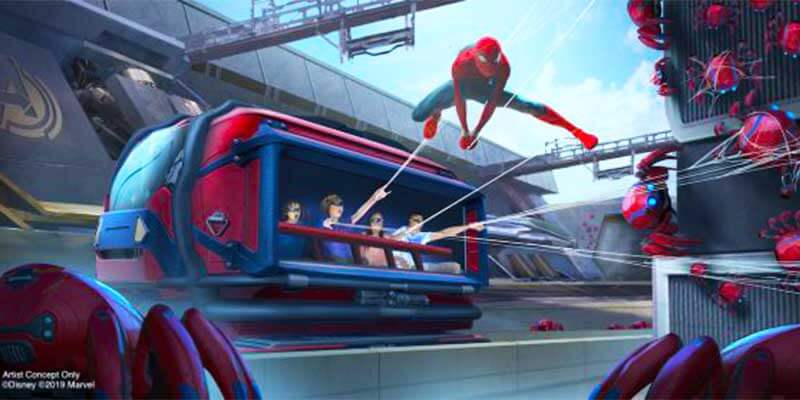 This immersive, interactive ride-through attraction is coming in Phase One of the new land. The Marvel story is expanding with an attraction-based organization (founded by Tony Stark). The Stark Motors building will be home to the new Spider-Man experience. It's the first Disney ride to feature Spider-Man!

Have you always secretly wished you could sling webs from your own wrist just like Spider-Man? Here’s your chance (thanks to immersive technology)! Attend an open house at the Worldwide Engineering Brigade (WEB), where the inventors invite you to take a test drive of the “Web Slinger” vehicle. Uh oh! Peter Parker's Spider-Bots are a bit buggy and are stuck in replication mode. Can you help save the day and catch them? You can see what it’s like to have super powers while helping Spider-Man collect Spider-Bots as you move through a virtual Avengers Campus. My little sister, Lily, is jumping with excitement to learn that this ride has no height requirement so she can ride it too!

It will really look as if you are slinging webs from your wrist. How does that work? Your 3D glasses help track your head and eye movement and sensors will track body movement so you can sling virtual webs from your wrists. The ride will have back-to-back seating similar to Toy Story Midway Mania! Your four-person group will work as a team, and members of the team will accumulate both individual and group scores. 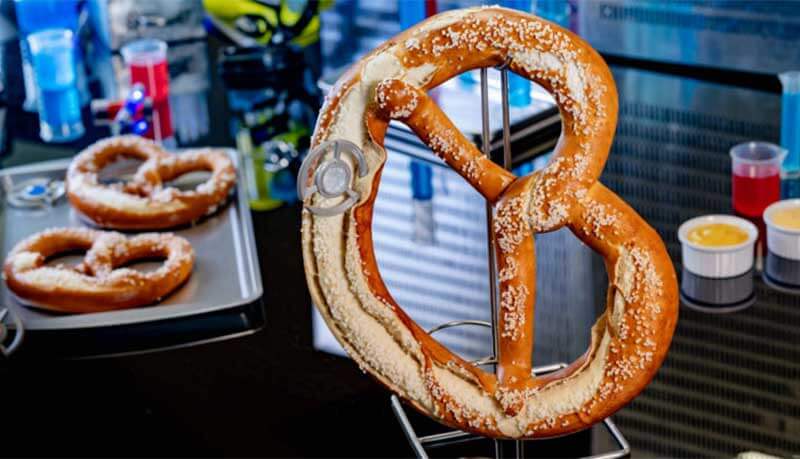 If you are familiar with how Ant-Man and The Wasp can use subatomic “Pym Particles” to alter their size and mass to grow or shrink, just wait until your see this concept applied to food! At the Pym Test Kitchen restaurant, the food is enhanced with Pym Particles. 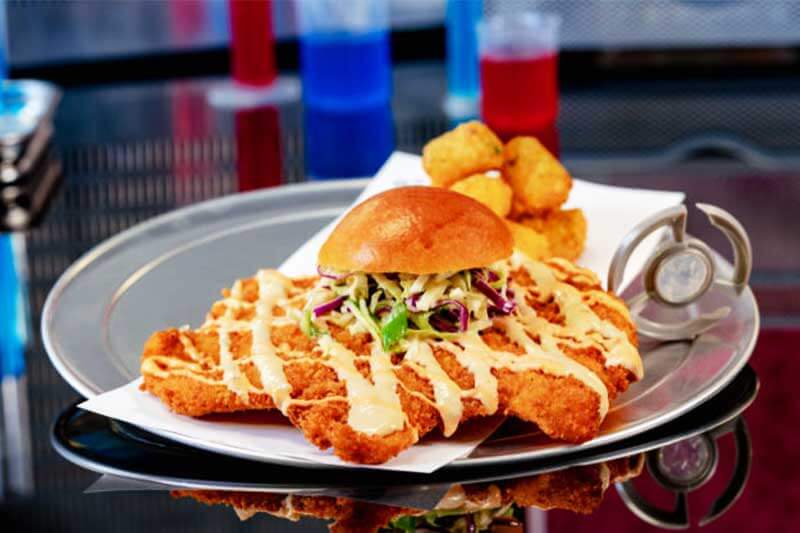 Red Pym Particles shrink items, while Blue Pym Particles expand them. The portions may be shrunken down (is this in case you are on a diet?) or grown to a larger size (perhaps to feed your hungry teenagers)! I am hopping excited to see how this works. I have a question though. Can I shrink my vegetables but expand my dessert (while keeping the calories and nutritional content the same, of course)?

Here's a sneak peek at some of the menu items we can expect.

You can get soda from the Coca-Cola Freestyle machines, but a special drink at the machines is a drink that shows up in Incredible Hulk comics and MARVEL movies:

This quick-service restaurant is situated in an old lab facility. Keep an eye out for massive soda cans and condiment bottles. The menu is on a six-foot-tall cell phone! While you are there, check out the outdoor Pym Tasting Lab. 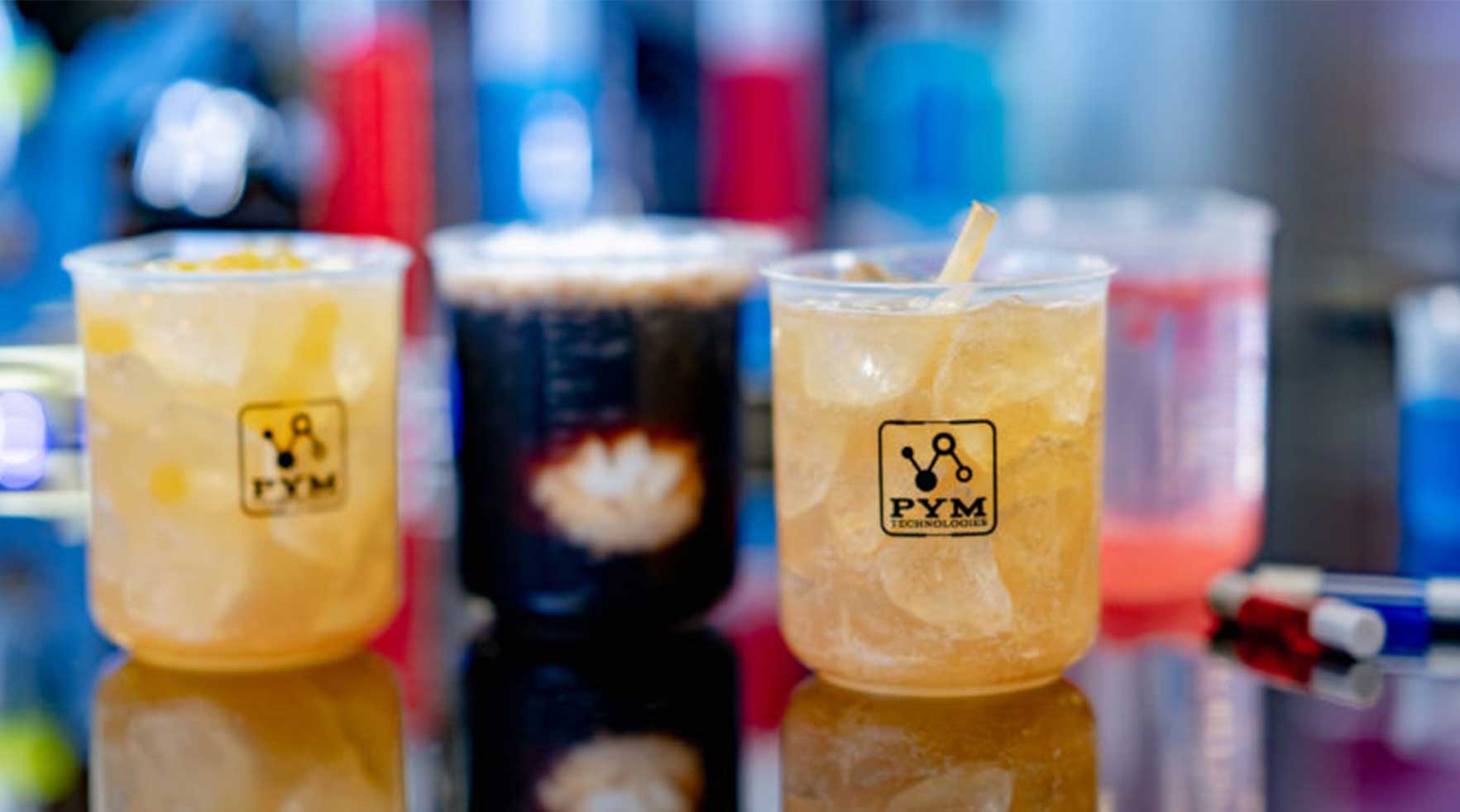 Take a seat at the outdoor bar and kick back with some alcoholic drinks. My parents are excited to try some of the adult beverages, including beer and cocktails. The lab will dispense drinks from a huge beer can in the middle of a hexagonal-shaped bar. The bar will overlook the central Plaza of Adventures Campus. Being a minor, I can't tell you much about them, but bottoms up! And I mean that literally: A reverse draft system will actually fill the beaker glass with beer from the bottom up! I am sure Super Hero fans will be MARVEL-ing over the drinks, and the whole family can enjoy nonalcoholic beverages and shrunken, bite-sized snacks served at the lab! The drinks have fun names, such as:

The Pym Tasting Bar snacks include a a sweet and savory mix of popped sorghum (looks and tastes like mini popcorn), mini pretzels and honey-roasted peanuts.

You can satisfy your super appetite on-the-go. Hop by the favorite food joints of the Avengers: Shawarma Palace and Terran Treats. Look for round, colorful churros with flavors that may vary per season.

It turns out that for some time there have been stories of unexplained energies and events that have taken place on the spot where the Stark Industries complex was built in the 1940s. Cloaking spells have protected the the area. Now, Tony Stark has brought Doctor Strange to teach recruits about the mystic arts and reveal the hidden Sanctum to the world! During a Doctor Strange mystic arts show, you just might see Marvel heroes and villains transported to Avengers Campus via a mystical portal. 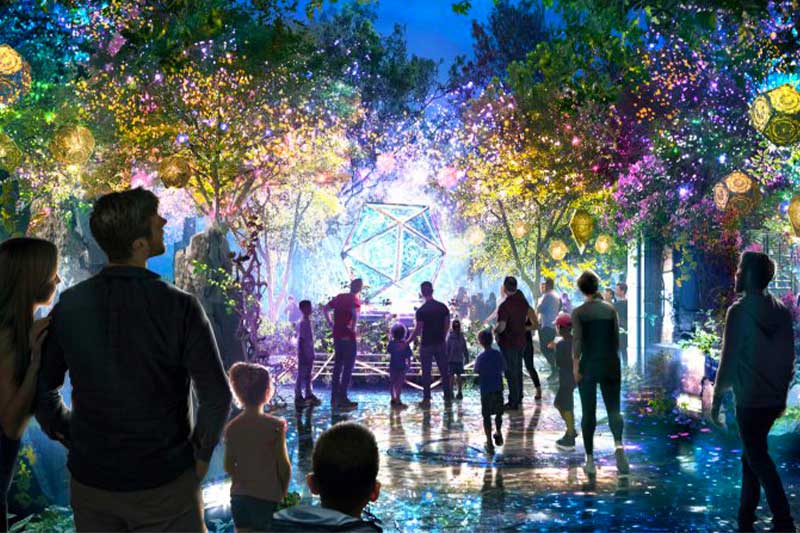 Dr. Strange will demonstrate his mystical abilities and open our eyes to the mysteries of the multiverse. We will get to see ancient ruins and learn about a battle that almost tore a hole in the fabric of time and reality, leading to the Orb of Cagliostro. It's said that the Orb is especially active at night. Be sure to hop by after dark to see the Sanctum area pulsating with magical energy and majestic colors.

Here's where to meet some of the Super Heroes:

The Hulk will not be present, but you'll see some of the damage he's inflicted. Look for a Hulk-dented wall.

Super Heroes in the Sky

In addition to being able to meet your favorite Marvel Super Heroes, look to the sky! Spider-Man will be swinging through Avengers Campus in a redesigned Spidey-suit. Literally. Disney has posted a video showing how a "stuntronic" robot can swing through the air, rotate, and perform backflips, somersaults and other acrobatic feats above the rooftops before sticking the landing! Spider-Man will be striking these aerial poses after being slung from a wire. This robot would be the first use of this technology (including the use of accelerometers, laser range finders and gyroscopes) in a Disney theme park.

It's rumored that a super villain called the Taskmaster and his gang are going to infiltrate the Avengers command center. The Taskmaster has photographic reflexes and can mimic Super Hero moves. Black Widow, Iron Man, Captain America, Captain Marvel and others will be on high alert, keeping an eye out for danger. If the Taskmaster and his gang of villains appear, the Super Heroes will be ready to spring into action. Watch for a confrontation with weapons that takes place on the second and third levels of the building!

You know the super strong and skilled elite royal guards from Wakanda? Young warriors can train with them and gain valuable wisdom! The Dora Milaje leader, General Okoye, leads training encounters in the campus courtyard. The sessions are said to be similar to the Jedi Training Academy that we miss so much from Disneyland Park. 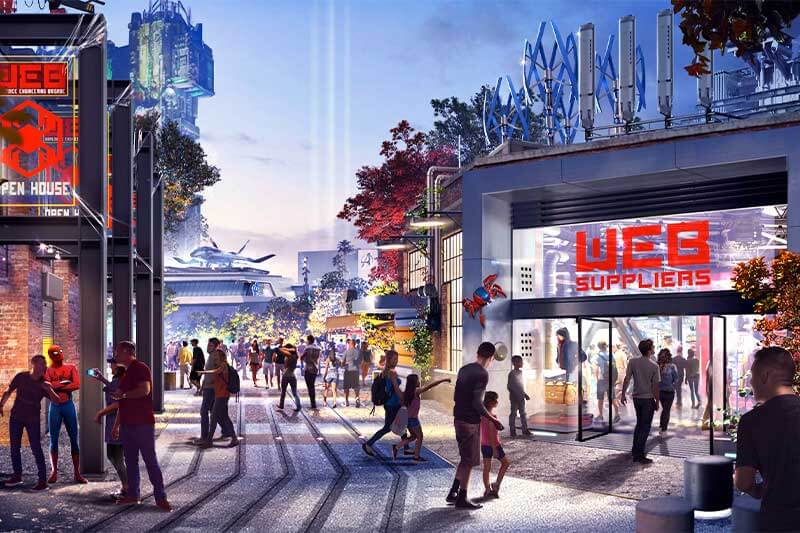 I can't imagine making a trip to Avengers Campus without getting some souvenirs and gear to take home with me. WEB Suppliers sells all the latest WEB inventions. I am saving up my allowance money for my own Spider-Bot robotic sidekick. Each Spider-Bot has a remote control and eight moving legs. Hopefully I'll have enough money for the at-home kits to build webs and purchase other accessories. WEB Suppliers also sells a backpack for the Spider-Bot, Spider-Man light goggles and more.

You can suit up in your Avengers Campus gear (such as hoodies, tees, headwear and other Super Hero supplies) at the nearby Campus Supply Pod.

Before Avengers Campus opens, you can visit The Collector's Warehouse at the exit to Guardians of the Galaxy to get your Super Hero graphic T-shirts, action figures and other souvenirs so you can arrive prepared when the campus officially opens. 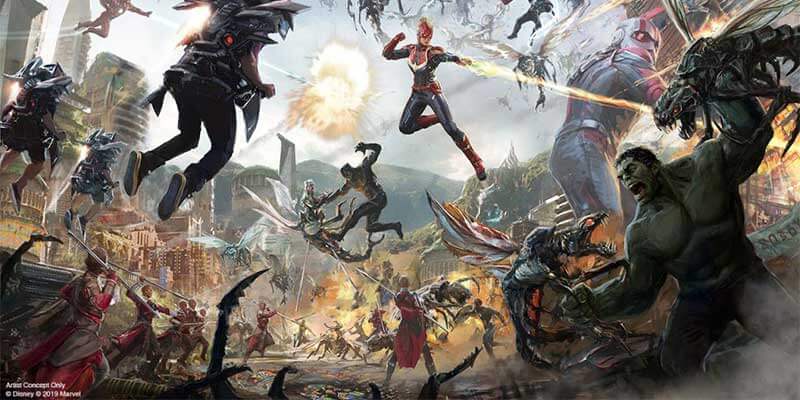 The Avengers Headquarters will eventually become the entrance to a brand-new “E-Ticket” attraction that puts you right in the middle of the action. Step aboard a Quinjet and fly along with the Avengers to Wakanda and places beyond. You’ll team up with the Avengers and fight alongside them to save the world in battle against powerful villains. Word is, these villains are giant winged insects with teeth like razors! Do you have what it takes to defeat them? The brand-new ride technology is unlike anything you've seen before! The ride seats may double as a jet pack and weapons system (according to concept art)! Whaaat?!

We know you can't wait for this new land. We hear ya! In the meantime, you can ride the toadally awesome Guardians of the Galaxy — Mission: BREAKOUT! next to those Stark Industries gates and meet various Avengers in Hollywood Land (before they move to Avengers Campus).

I can't wait to hang out with Iron Man, try new foods and sling some webs! What are you most excited about when Avengers Campus at Disney California Adventure opens? Please share your excitement and questions in the comments section below. 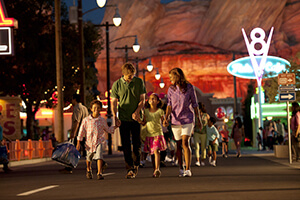 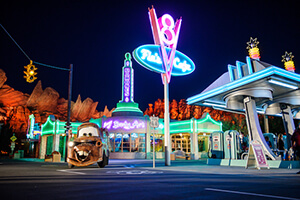