We frogs, like our readers, have been hopping with excitement that the Orlando theme parks have reopened and are still jumping with anticipation for news or signs that other U.S. theme parks might be reopening. Before Disney World began its phased reopening, we we watched Shanghai Disneyland pave the way for Disney parks to reopen when it reopened its gates on May 11. We pored over the ribbiting details to get a glimpse of what to expect when the U.S. Disney parks reopen.

Then it was toadally exciting (and a bit of a tearjerker) to experience a U.S. Disney park reopening firsthand at Disney World. Magic Kingdom Park and Disney's Animal Kingdom reopened July 11, and then when EPCOT and Disney's Hollywood Studios reopened July 15. We've also had a chance to experience Disneyland's phased reopening by visiting the now open Downtown Disney district (although Disneyland theme parks and hotels remain closed for now).

We now we once again look to Shanghai Disneyland's opening procedures as that park continues to move forward and increase capacity. The Chinese government is allowing tourism sites to increase capacity from 30% to 50%. As of Aug. 24, 2020, (a little over three months after reopening) Shanghai Disneyland is increasing daily capacity at the resort. With that comes a new reservations phase. Parades and fireworks have resumed (on a trail basis), bringing more Disney magic back to the park. It's exciting to see the park evolve during the pandemic. It helps us to use Shanghai Disneyland as a model in looking forward to the changes that will come to Disney World and eventually Disneyland.

New Reservations Phase and the Return of Character Meet and Greets

Another new modification at Shanghai Disneyland is the return of character meet and greets ... but still physically distant. They are called Selfie Spots. Guests stand in a taped-off section and can take selfies with a character a safe — but much closer than before — distance away. This includes unmasked characters, such as princesses. You can talk and interact with the characters and get that special personal time without getting in each other's personal space. You can even do tai chi with Donald Duck and Chip 'n' Dale!

All the changes come with a focus on safety and health for park guests and employees. The Disney Parks Chief Medical Officer and executives put many enhanced safety measures in place to safely reopen parks worldwide. Even though the U.S. Disney parks do not operate exactly the same as the overseas parks, the Shanghai Disneyland opening procedures and how that park evolves over time provides a glimpse of what's to come in terms of U.S. Disney theme parks. 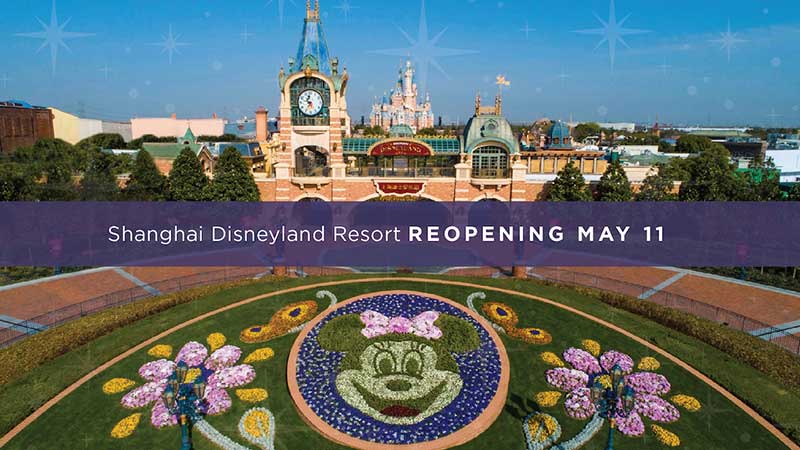 Just as the U.S. was gearing up for social distancing and closing the theme parks in March because of COVID-19, Shanghai was reopening Disneytown, Wishing Star Park and the Shanghai Disneyland Hotel. The theme park reopened May 11. It's a phased reopening with additional health and safety measures. There is an “Advanced Reservations Period” with a limited number of tickets available for sale in advance. Disney World will also have a reservations period to limit park capacity.

Let’s take a look at the procedures that have been and are in place during the phased reopening of Shanghai Disneyland. Keep in mind that the situation is fluid and procedures continue to be reviewed and are adjusted as time goes on. We've already seen show returning and increased capacity. We'll also touch on the health and safety measures Disney is exploring for its U.S. parks as outlined by Disney Parks Chief Medical Officer Pam Hymel.

According to CEO Bob Chapek, Shanghai Disneyland's capacity is about 80,000 visitors per day; however, the government originally mandated it operate at about 30% capacity (24,000 visitors). Chapek said the park would initially begin well below that, ramp up to that 30% capacity over several weeks and "at that point there could be some lifting of even those restrictions of the 30%." As of Aug. 24, capacity increases to 50%.

In order to limit guest attendance initially, the park had to sell a limited amount of tickets and have an “Advanced Reservations Period.” Shanghai Disneyland and its official travel partners sold dated tickets online in advance.

As the Advance Reservations System ends and the new reservations phase begins, guests have more flexibility and can reserve within a 30-day window. Annual passholders and Shanghai Disneyland general admission ticket holders make a reservation by submitting their visitation date and personal information to obtain a Shanghai Disneyland Reservation QR Code prior to their arrival at the park’s Main Entrance. They are no longer bound to an entrance time. Annual passholders expiration is extended 212 days (the total number of impacted days from January 25 to Aug. 23, 2020) starting from the original expiration date of each pass.

Each guest will have their temperature checked and must wear an approved mask during their entire visit (except when dining). A YouTube video demonstrating the check-in procedures at Shanghai Disneyland showed a stationary thermometer that reads temperatures as people walk by.

While the majority of attractions, shows, rides, dining locations and shopping locations will be open, guests can expect controlled attendance. Restaurants will have reduced capacity.  The park will structure queues and ride vehicles to support social distancing.

Due to social distancing, parades, shows and nighttime spectaculars are slowly returning as time goes on. Shanghai Disneyland opened without most major shows or parades and has slowly brought them back after several months for a trial basis as they make operational adjustments. The best way to keep track of showtimes and open shows is to check availability through the resort’s website and app. When the park first reopened, Enchanted Storybook Castle came to life in early evening each day with light and music with Evening Magical Moments. Stage shows with characters are slowly resuming with social distancing guidelines in place. Children’s play areas are closed for now.

Seeing Disney characters is a very magical part of visiting any Disney theme park. Well, there’s good news and bad news on the Disney characters at Shanghai Disneyland. The bad news is that guests are not getting a hug and with a character anytime soon. But the good news is that the characters are there to welcome guests and make group appearances in each land. Plus, a special Disney character procession called the Mickey and Friends Express will take place several times daily. For now, the characters need to socially distance themselves and greet guests from a safe space. More good news: The face characters, such as princesses, are not in masks. They do, however, need to keep a safe distance from the guests, so guests can give a royal wave and send love.

As mentioned earlier, after a few months, the the Shanghai character meet and greets have returned with modifications. Instead of being a balcony away, they are more like several feet away. Guests stay in a designated taped-off Selfie Spot box area and still cannot touch characters, but they can have a conversation and snap a selfie. Cast members cannot help with picture taking. As you would expect, these character interactions are pretty popular, so the line can get cut off from time to time.

As can be expected, hand sanitizers are available at each attraction entrance and exit, as well as at restaurants and shops. Cast members have increased the frequency of all sanitation measures. Entry turnstiles and high-touch areas will be sanitized more frequently. Cast members sanitize railings, handlebars and ride vehicles. Guests can expect touchless interactions when purchasing merchandise and food.

What Can We Expect When Disney World and Disneyland Reopen? 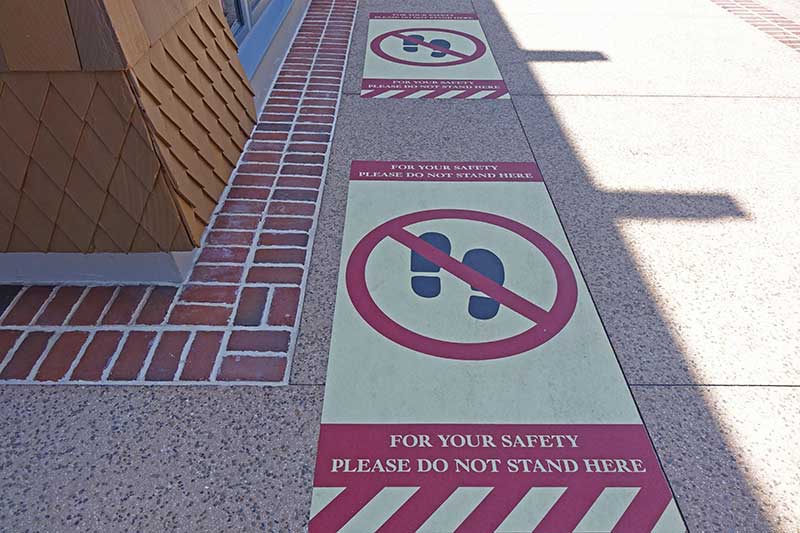 The Walt Disney Company has begun its phased reopening at Disney World. Disney has already implemented several health and safety measures to keep employees and guests healthy. For example, cast members have increased the frequency of cleaning and disinfection in work areas. They have adjusted practices to promote physical distancing. Disney provides cast members with access to necessary PPE, including face coverings.

Disney Springs at Disney World and Downtown Disney at Disneyland are open. Hop over to our Disney World reopening and Disneyland reopening posts for the latest dates, news and procedures. Disney parks guests in the U.S. undergo a temperature screening (via a touchless infrared thermometer) from a health professional. Masks are required for all guests ages 2 and up except when eating or drinking. Markings on the ground and cast members encourage social distancing. Guests can access hand sanitizer and washing stations throughout the property.

The Disneyland site states, "Upon reopening, certain Disneyland Resort theme parks hotels, restaurants and other locations may be limited in capacity and subject to restricted availability or even closure based on guidance from health experts and government officials." It also says that park admission is not guaranteed. 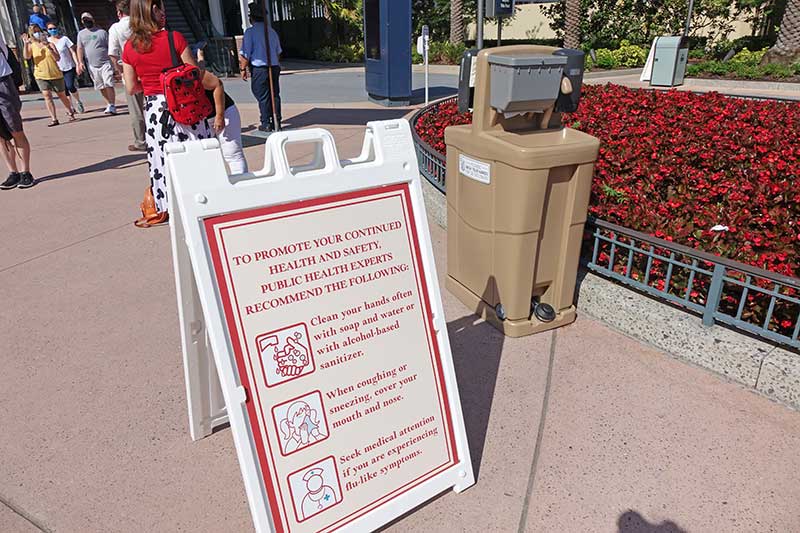 The Disney parks are exploring and may develop the following scenarios:

Phased reopening - Disney has begun a gradual reopening and/or partial reopening of certain locations. Some retail and dining locations open before the parks reopen. For example, in Florida, Disney Springs kicked off the Walt Disney World Resort reopenings in May and Downtown Disney reopened in July. The Disney World theme parks reopened in July with Magic Kingdom Park and Disney's Animal Kingdom on July 11 and then EPCOT and Disney's Hollywood Studios on July 15. Disneyland theme park and hotel have not reopened yet.

Physical distancing and capacity measures - Managing guest density in queues, restaurants, hotels, ride vehicles and other facilities throughout the park and across the resort is a major focus. Disney has implemented physical distancing guidelines based on guidance from health authorities, such as the Centers for Disease Control and Prevention (CDC) and appropriate government agencies. This includes implementation of guest capacity measures to comply with state and federal guidelines. Disney is exploring ways to use technology to aid in these efforts, such as the Play Disney Parks App and through virtual queues at Disneyland and Walt Disney World. Guests can expect contactless interactions such as Mobile Ordering and cashless transactions.

Face coverings: All cast members and guests (ages 2 and up) are required to wear face coverings except when eating and drinking. Hop over to our post for tips on wearing masks at theme parks.

Cleanliness and sanitization - Disney has increased cleaning and disinfection in high-traffic and other areas.

Screening and prevention support - Disney follows guidance from the government and the medical community regarding enhanced screening procedures and prevention measures, including those related to personal protective equipment (PPE), such as face coverings. Hand sanitizers and hand washing stations have been implemented across the resorts.

Cast training - Disney emphasizes a strong culture of health and safety among cast members and will continue to provide new training and reinforcement.

As mentioned, these examples may continue to evolve as the situation changes. Keep hopping back, as we will continue to stay on top of these details and share as much as we know about what to expect when U.S. parks open. If you want to stay up to date on all the U.S. theme park closures and reopening dates, be sure to hop over to our post on COVID-19 Information for Theme Parks, Resorts and Hotels.

Related: Practicing Good Health and Wellness in the Theme Parks