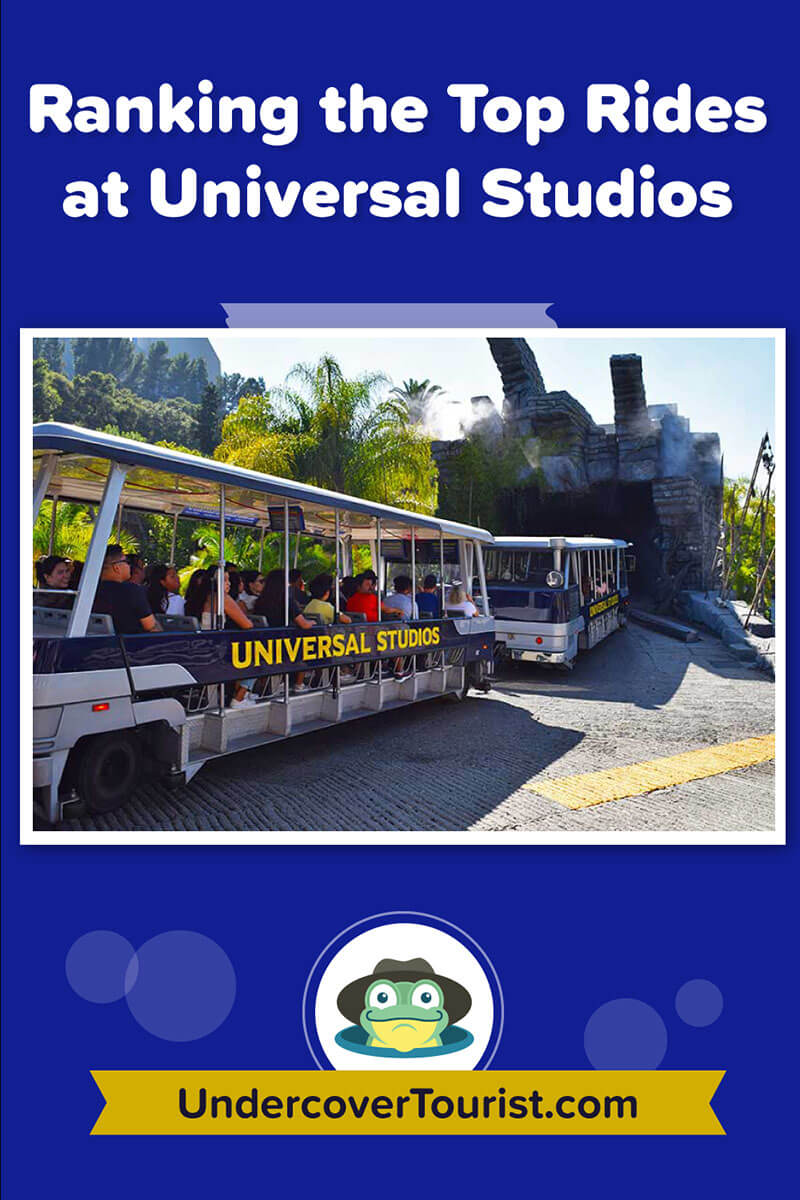 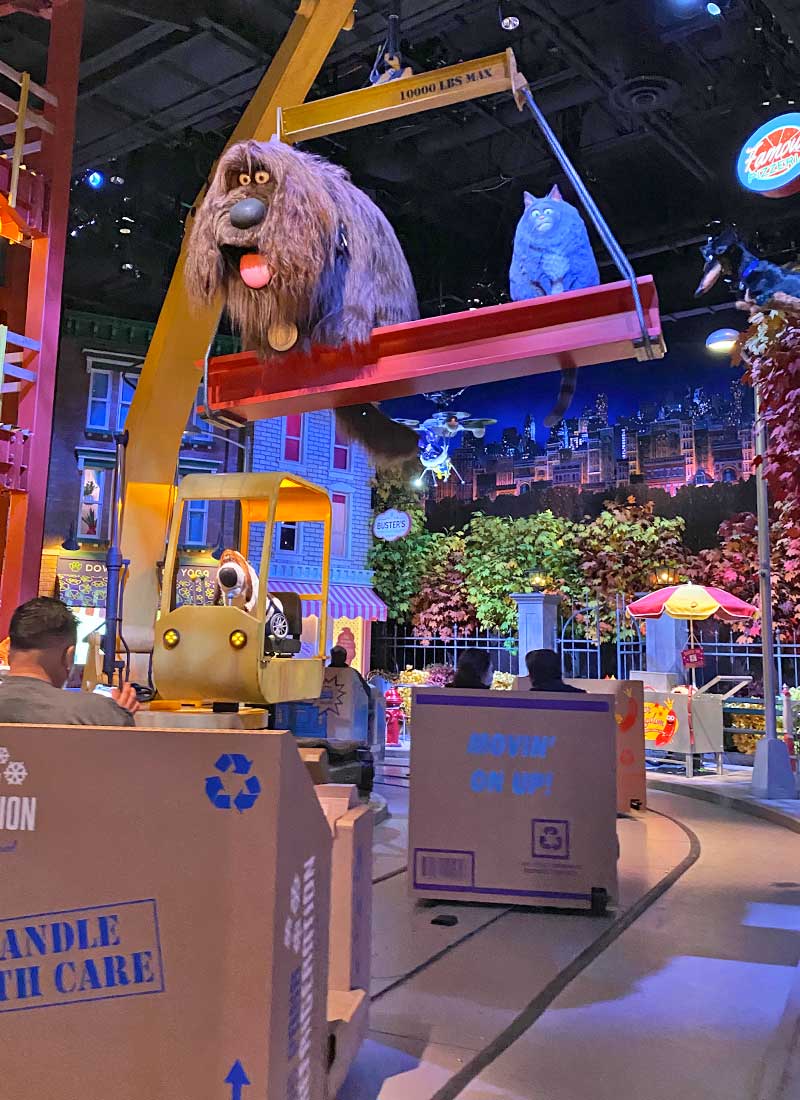 10. The Secret Life of Pets: Off the Leash

Let's start with the newest ride! This family-friendly ride opened in April 2021. Our toddler Lily is a huge fan. The immersive queue is so detailed and prepares you for the ride. While in the queue, you learn that you are a stray puppy in need of a home. All the pets in the apartments you wander through are going to help you get to the adoption fair. You'll climb into a cardboard box and go on a journey through NYC, make a stop at the groomers and then finally find a family and fur-ever home. It's a slow-moving ride with a height requirement of 34 inches (86cm).

The slow-moving box/ride vehicle is puppy-sized. Try the ride vehicle out in front to test the size if you are more of a fully grown Great Dane or large bulldog size or shape since it's a tight fit for those big dogs. You can watch the ride (and queue) on our YouTube channel.

9. Flight of the Hippogriff 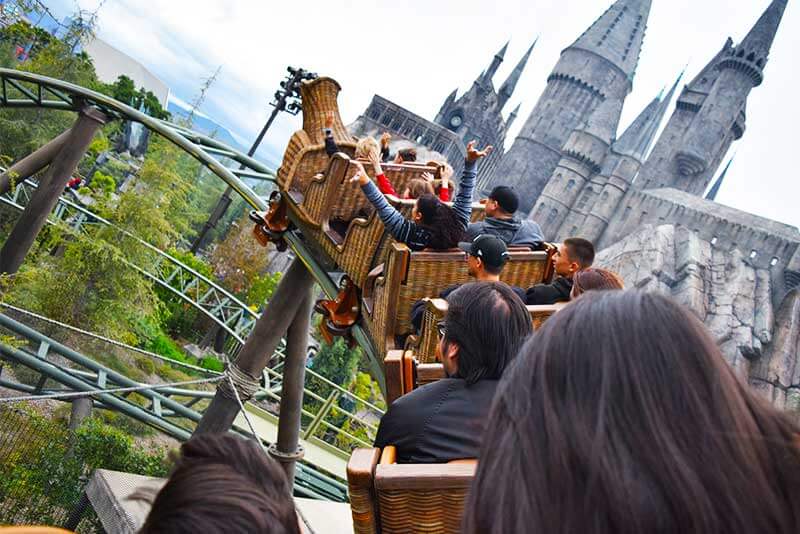 This family-friendly roller coaster is the perfect introduction for developing muggle or magical thrill-seekers in the Wizarding World of Harry Potter. You’ll find it in the Care of Magical Creatures grounds just outside of Hogwarts Castle. You’ll walk past Hagrid’s Hut (keep an ear out for Fang barking). Listen for Hagrid’s instruction for the proper way to approach a Hippogriff. What’s a Hippogriff, you ask? It's a magical creature with the body of a horse and the wings and head of an eagle. Bow to Buckbeak the hippogriff to show proper etiquette, and you’ll be on your way for a short swooping and diving flight around the pumpkin patch. 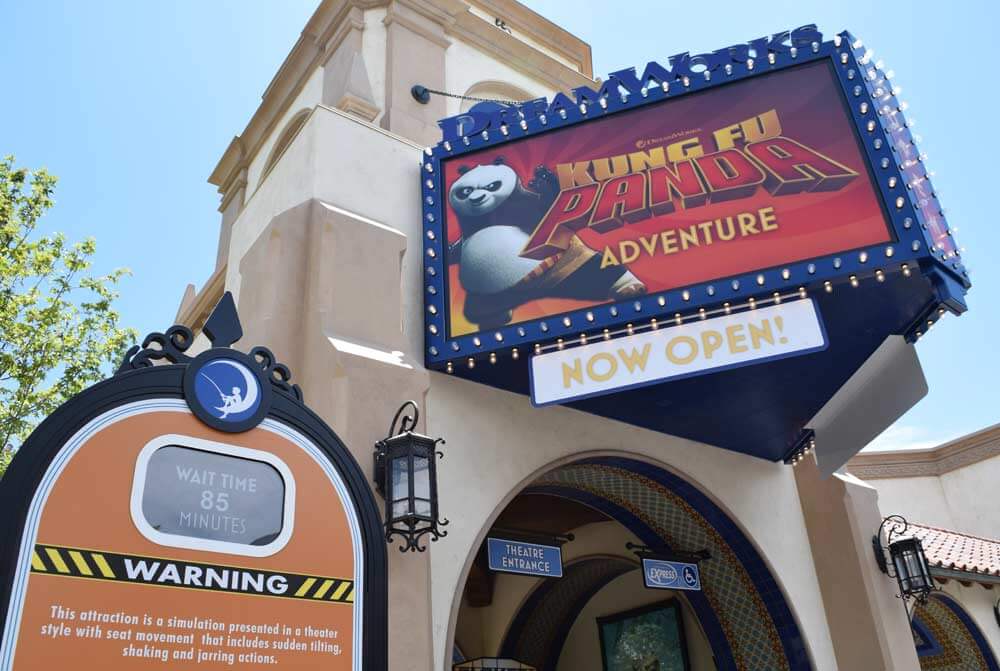 It’s not a ride in the strictest sense of the word, but the DreamWorks Theatre Featuring Kung Fu Panda puts you in the middle of a multi-sensory adventure that uses state-of-the-art visual effects and technology starring Master Po. Plus the seats do move a bit in relation to what is happening on-screen. Join Po on a thrilling journey of awesomeness that will stimulate the senses and unlock your inner hero through the power of Kung Fu. 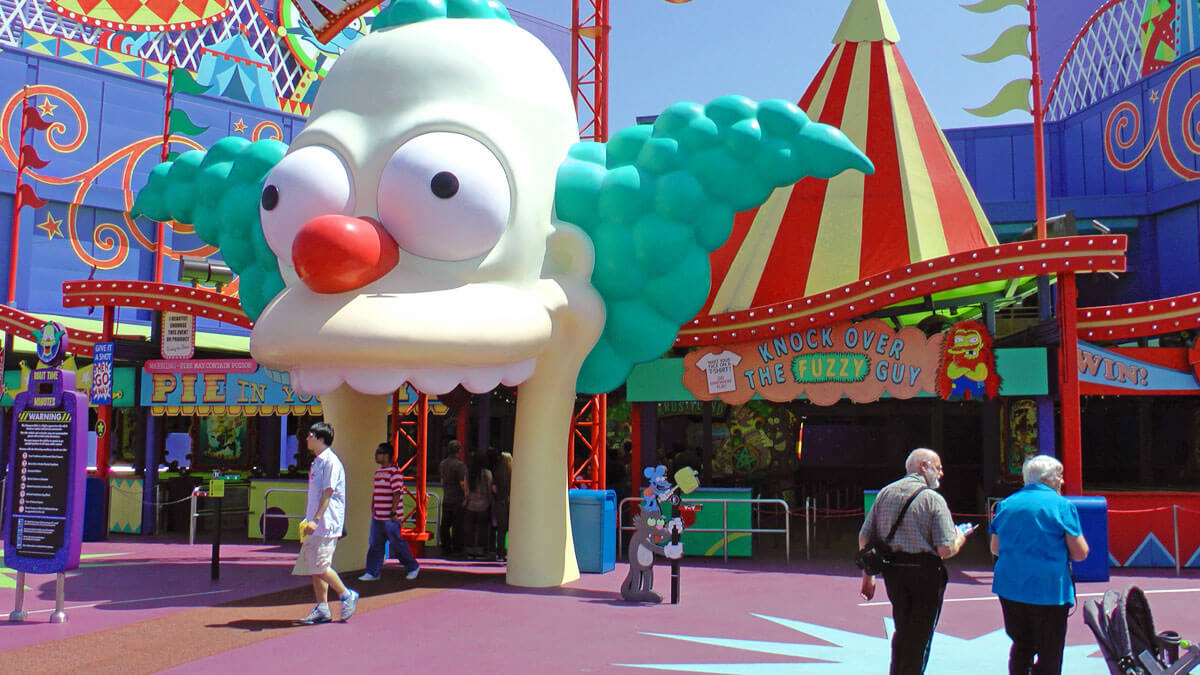 One of our very favorite attractions is a motion-simulated wild ride that takes you through a rundown midway (owned by Krusty the Clown!) that has been taken over by criminal mastermind and former Springfield Mayor Sideshow Bob. It's up to the Simpsons to save you!

6. Revenge of the Mummy

We frogs are coaster fans through and through. For us, it just doesn't get better than this 45-mph coaster ride through the world of Imhotep. Part dark ride, part coaster, Revenge of the Mummy is pure thrills and surprises!

The former Jurassic Park water ride has evolved into the new Jurassic World ride. This new version has some pretty cool special effects and all the thrills of the old ride (along with a few new ones). It's also the perfect way to cool off on a hot summer day. The most exciting event is when Indominus Rex meets Tyrannosaurus Rex!

Super sweet like Margo, Edith and Agnes, Despicable Me Minion Mayhem is a playful, at times nail-biting, motion simulator adventure! Gru has invited guests to his house to undergo minion training, and it becomes clear soon enough that his (evil) intention is actually to turn guests into minions! Thankfully, the girls are there to help out. For us, this family ride is not to miss, but I must warn you that the first time Lily rode it, she was absolutely terrified she would be turned into a minion. 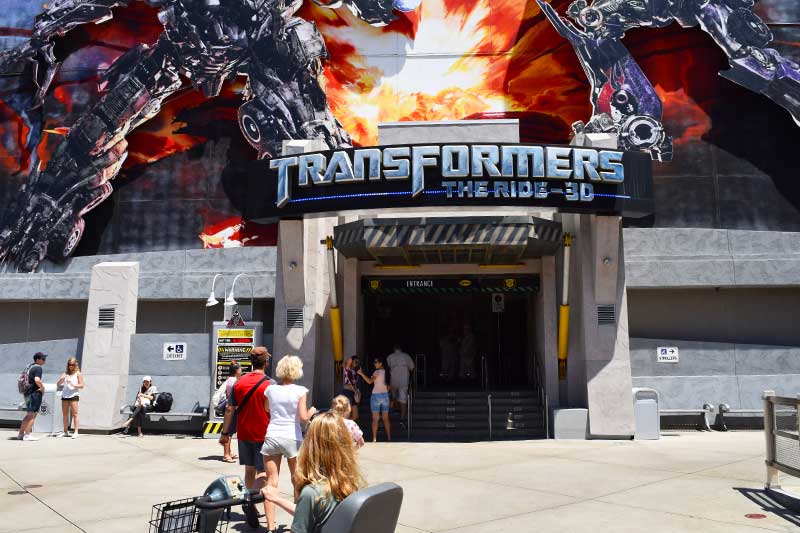 Using flight simulation technology and 3D-HD screens, Transformers: The Ride 3D puts you right in the middle of the action, battling alongside Optimus Prime to protect the AllSpark. It's one of the most technologically advanced rides of all time, and you don't need to be a "Transformers" fan to appreciate it.

2. Harry Potter and the Forbidden Journey

Weave through Hogwarts Castle while you're in line. You'll pass through Dumbledore’s office, the Defense Against the Dark Arts classroom and Gryffindor’s common room in the queue. You'll reach your enchanted bench deep inside the Room of Requirement. Then, with a puff of magic Floo Powder and Hermione’s "Observatory" spell, you are off on a magical journey. Follow Harry on his broomstick around Hogwarts School of Witchcraft and Wizardry. You’ll encounter dragons, whomping willows, giant spiders, dementors and more. You’ll drop, spin, twist and turn — sometimes ending up on your back — but you won’t go upside down. This ride uses the latest technology to take you through animatronics and projection screens. It’s frogtastically fun, but people prone to motion sickness also get a little green on this ride. Flora’s hop tip is to close your eyes during projection scenes if you start to feel queasy.

The park's signature attraction is a 60-minute tour through the Back Lot of Universal's working studios and number one on our list of Universal Studios Hollywood's best rides. Yes, you might spot a celeb on set! If not, you'll still tour some of the most famous sets in all of movie and TV history.

Tours vary due to shooting schedules, but scenes may include the courthouse square in "Back to the Future," the airplane crash scene from "War of the Worlds," Wisteria Lane and the Bates Motel from "Psycho." You'll cozy up to Jaws and do battle with King Kong on Skull Island. Finally, the grand finale is the heart-pounding Fast & Furious - Supercharged. Using 3D-HD imagery, you'll be flying along at 120 mph with the cast of the hit movies!

To experience all these Universal Studios rides, plus the shows and characters (not to mention food and treats), you’ll want to skip some lines. The Universal Express ticket definitely helps shorten the amount of time you’ll stand in line so you can get out and enjoy more aspects of the parks.

SAVE $140 vs Gen. Admission gate price