What Opened at Disneyland Resort and Universal Studios Hollywood in 2022

'Sup?! Tad here, the resident family thrill-seeker and videographer. I always have my green finger on the pulse of what’s hoppening in the parks, and I covered all of the frogciting events, rides and new lands that came to Disneyland Park, Disney California Adventure Park, Universal Studios Hollywood and more in 2022. For those of you looking for what opened last year and even what opened the year before that, we've got you covered! 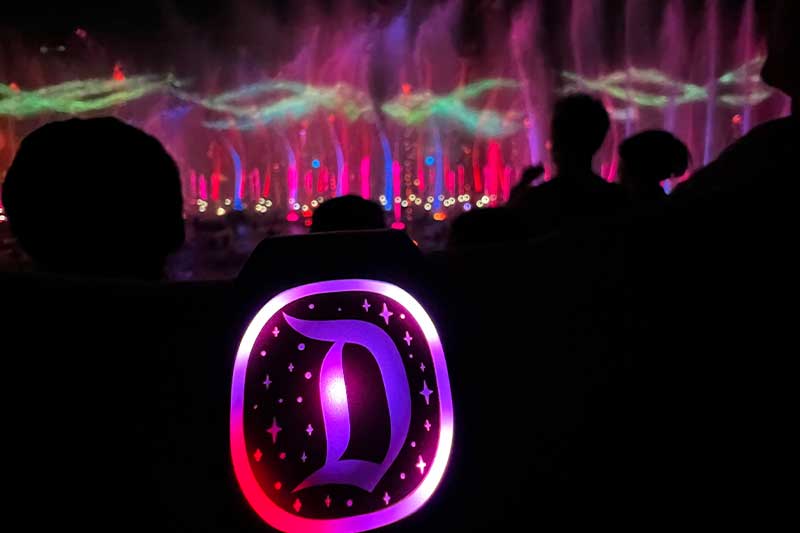 What Opened at Disneyland and Universal Studios Hollywood in 2022

Many events and entertainment offerings hoppened or returned in 2022!

MagicBand+ — debuted Oct. 26, 2022 — The next generation of the wearable MagicBand, MagicBand+, made its big debut at Disneyland Resort in October 2022. It features interactive elements that guests can use all around the Disneyland Resort, allowing guests to see and feel park experiences in a new way. Besides being used to enter the park and Lightning Lanes, the rechargeable and waterproof band has color-changing LED lights, haptic vibrations and gesture recognition.

During nighttime spectaculars, the band pulses with colorful lights and vibrations. Guests can get PhotoPass photos with the tap of a wrist. When MagicBand+ is paired with a smartphone through the Disneyland app, it allows for personalized options, including light colors and being able to adjust vibration and motion recognition.

In Star Wars: Galaxy's Edge, use it to find virtual bounties when you play with the interactive Star Wars: Batuu Bounty Hunters quest. Pair it with the thermal viewer in the Play Disney Parks app. Enjoy surprising magical touches during certain entertainment in Avengers Campus. 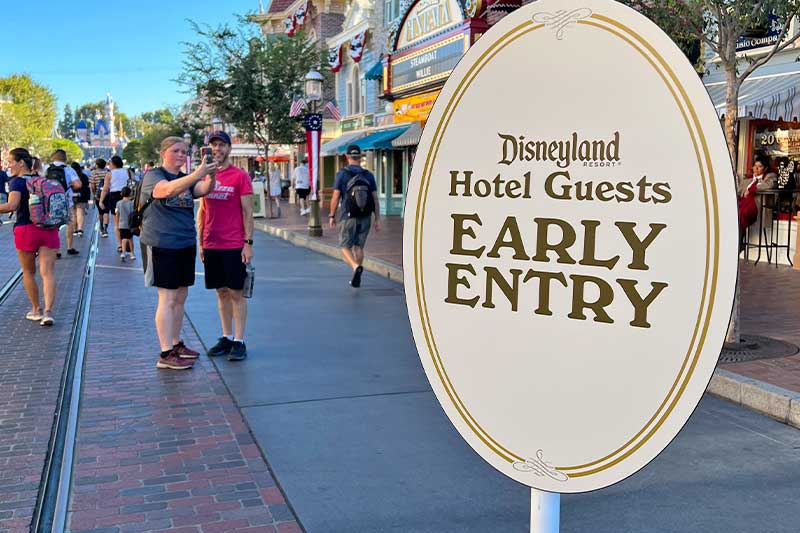 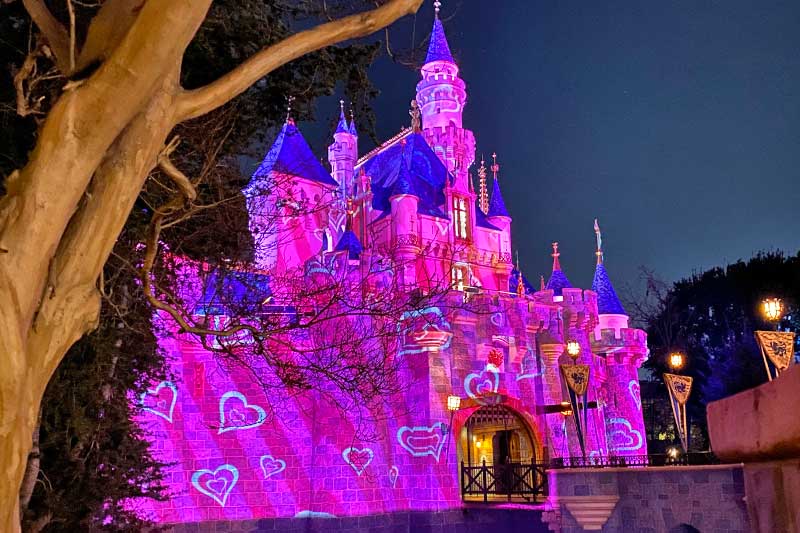 Sweethearts' Nite at Disneyland — Feb 1, 3, 8, 10 and 14, 2022 — The popular Sweehearts' Nite made Disneyland the most romantic place on Earth for five unfrogettable nights. Disney fans and their sweeties had a date night at Disneyland.

Here's what was included:

Celebrate Soulfully — select days in February 2022 and again in June for Black Music Month — Disneyland celebrated Black History Month with musical acts and more. Celebrate Gospel! — which used to take place at Stage 17 at Disney California Adventure — moved to Fantasyland Theater at Disneyland Park to celebrate the soulful spirit of Gospel music for two Saturdays in 2022. On Feb. 19, 2022, award-winning Gospel singer, Kierra Sheard performed with a capella Gospel group Sacred Groove. On Feb. 26, the Grammy award-winners Jonathan McReynolds and Mali Music, along with The Singers of Soul, took the stage. Community Choirs performed on both days, as well.

Guests did crafts, ate snacks from Troubadour Tavern and shared thoughts on the gratitude wall. 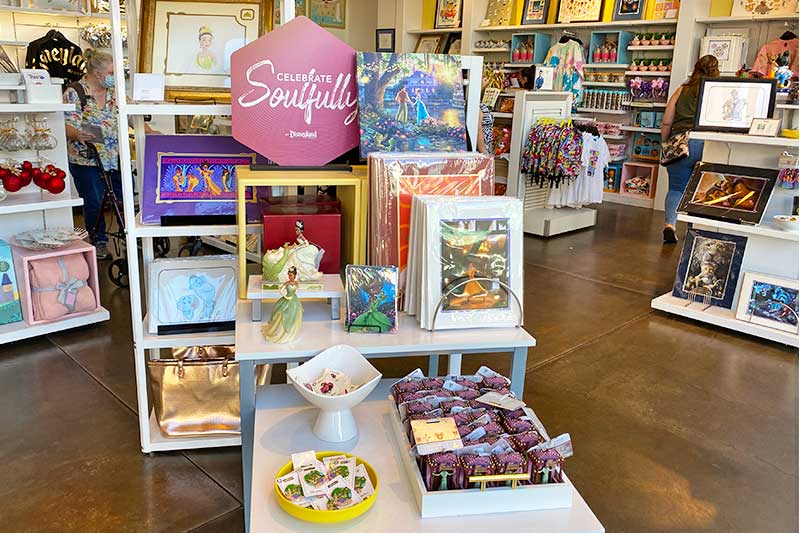 Special merchandise was available at Pele Soccer, Lovepop, WonderGround Gallery and the Post 21 cart. We admired art displays from emerging Black artists who have been inspired by Disney and Pixar's "Soul," "The Lion King," "The Princess and the Frog" and "The Proud Family." Chalk muralist Marcella Swett created a new chalk mural each week. Hue Unlimited collaborated with Pixar for a collection of wearable art.

At Disney's Grand Californian Hotel & Spa, there was live jazz in the lobby in the evenings, along with a special menu of wine, beers and spirits from Black-owned businesses at the Hearthstone Lounge.

At Downtown Disney in June, the art exhibit, “The Soul of Jazz: An American Adventure” was found adjacent to the Star Wars Trading Post. We also enjoyed nightly music and a DJ on Saturday and Sunday afternoons. 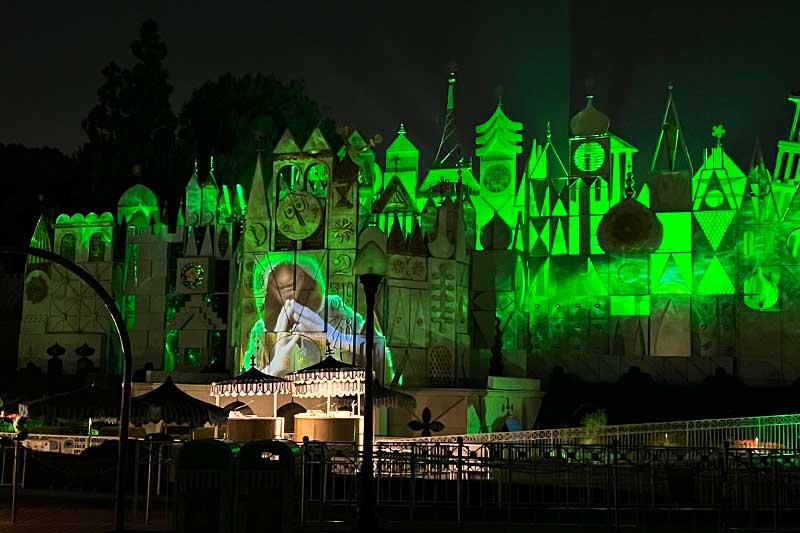 "We Don't Talk About Bruno" Overlay — debuted April 11, 2022 — Watch as the exterior of "it's a small world" transforms several times a night with projection effects inspired by the iconic "Encanto" song none of us can talk about, but we all definitely sing along to ;) During the day, guests can also visit Mirabel in Frontierland. 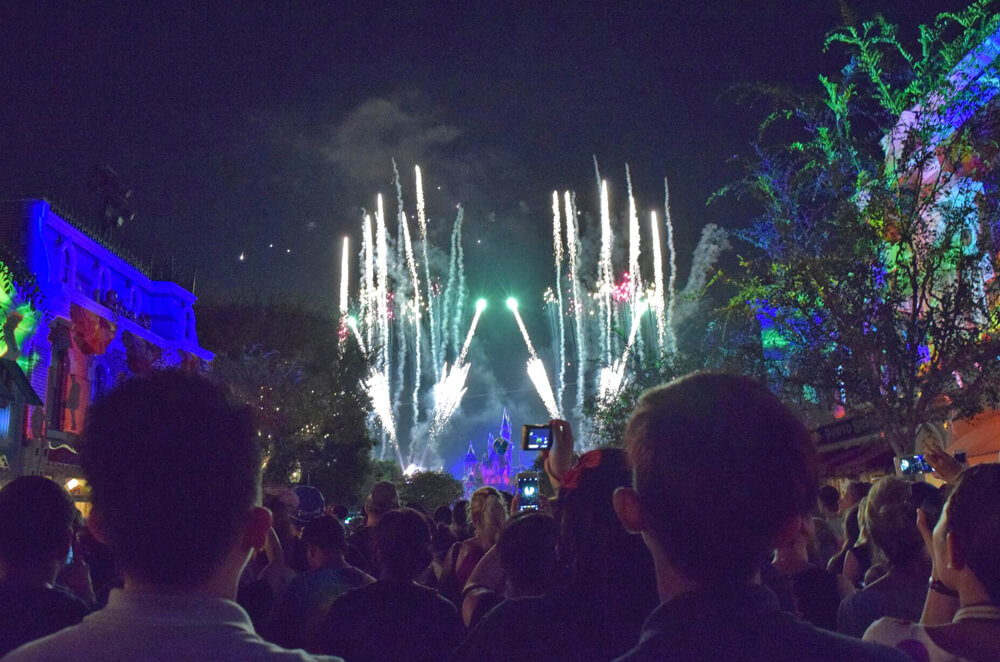 The Main Street Electrical Parade — returned April 22, 2022, through Sept. 1, 2022 — This oldie but goodie parade returned to Disneyland Park for a limited time to celebrate its 50th anniversary. Even better? This classic was reimagined with an all-new grand finale, featuring stylized scenes from "Encanto," "The Jungle Book," "Raya and the Last Dragon," "Coco" and more! 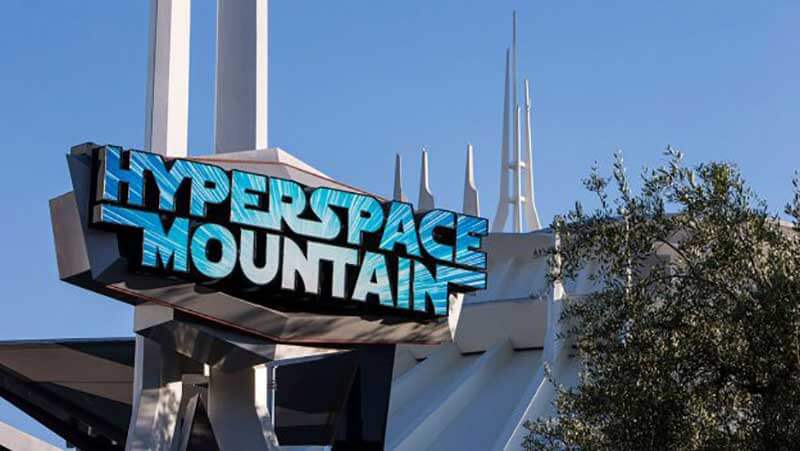 Disneyland After Dark: Star Wars Nite — May 3, 4 and 27, 2022 — This Disneyland After Dark event invited members of the dark side and the light side to come together once Disneyland Park closed for the night. For the event, there was a battle in the skies above Disneyland with a special "Star Wars"–themed fireworks spectacular! "Star Wars" fans also enjoyed galactic dance parties, character encounters, themed decor, event merchandise and inspired food and beverage. We grabbed our lightsabers and posed for "Star Wars"–themed photo opportunities.

Tomorrowland Skyline Lounge Experience — returned May 20, 2022 — The Tomorrowland Skyline Lounge Experience is back. For $60 (plus gratuity) you have a place to chill for the evening on the balcony over Star Wars Launch Bay. You can watch fireworks from this location, so you'll want to reserve a night with fireworks! No refunds are given if the fireworks get canceled though. You can stay for the evening or come and go as you like. 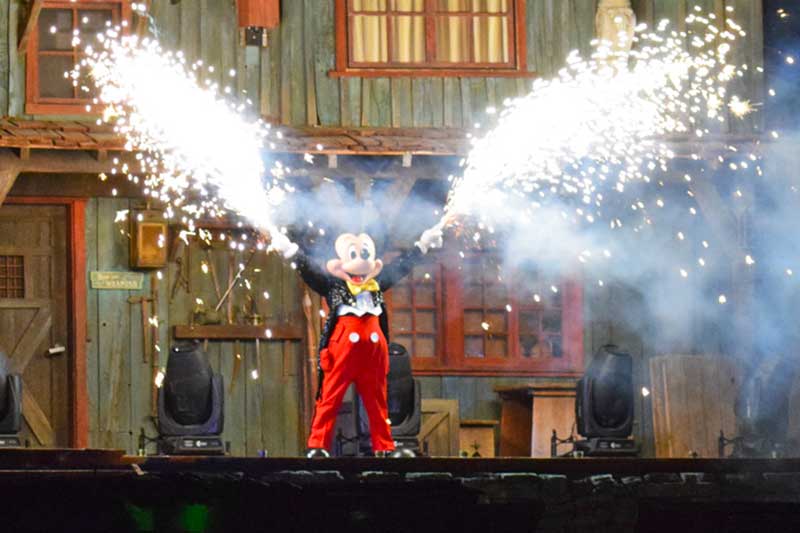 "Fantasmic!" — returned May 28, 2022 — Disney's longest-running (turning 30 years this year!) nighttime spectacular returned. The waters of the Rivers of America spring to life as Mickey Mouse uses his imagination to create images on fountains inspired by Disney classic films such as “Fantasia,” “The Jungle Book,” “The Little Mermaid” and more. Many live characters sail by on rafts and boats. The theme song is now embedded in our heads in anticipation of its return. Hop over to our Fantasmic! post for updates and tips. 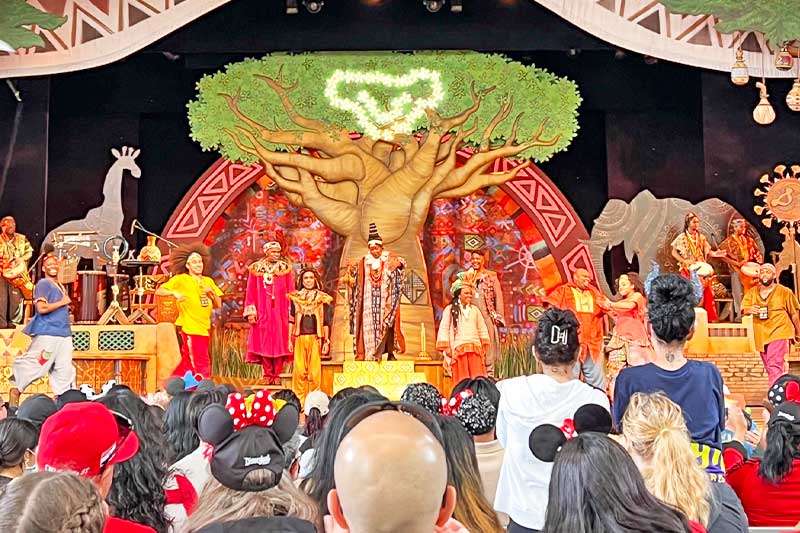 Tale of the Lion King — returned May 28, 2022 — The popular storytelling performance returned, but this time to a new location. Previously, the show took place in the bright sunshine at Paradise Gardens Park. We are toadally excited that it found a new home in the covered Fantasyland Theater (with seating) in Disneyland Park. Rejoice in the telling of "The Lion King" by Storytellers of the Pride Lands. This troupe of traveling performers presents Simba’s journey in a unique story-theater style with live music, dialogue, dance and percussion. We are feeling the love tonight! Special food and beverage are available at Troubadour Tavern. 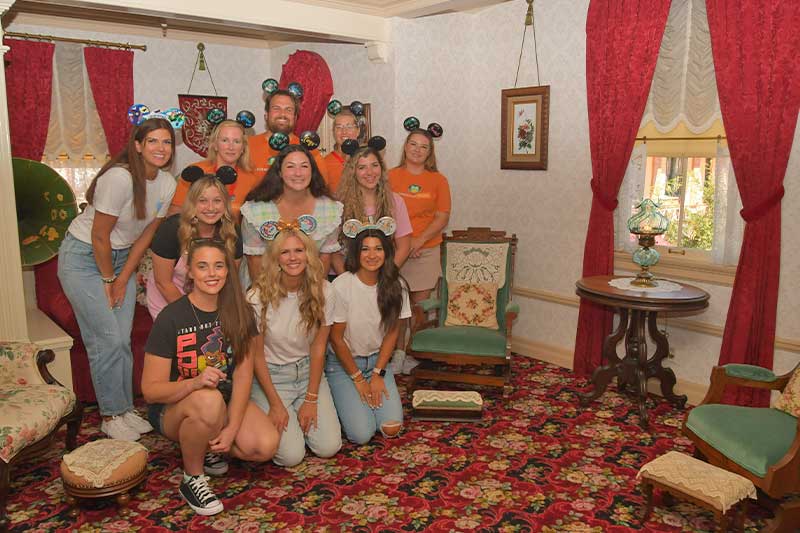 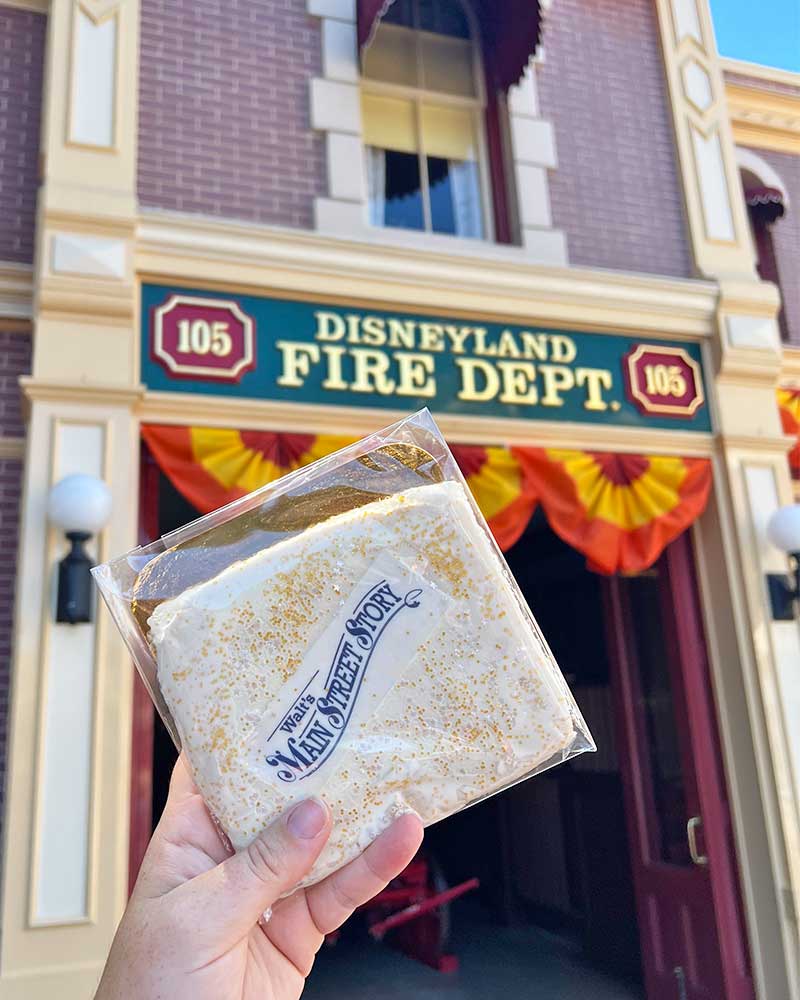 The tour takes you into Walt's apartment above the fire station, where a lamp remains lit in the window to honor Walt's spirit. We went on this tour with some froggy friends and there was not a dry eye in the place. This tour accesses some areas never seen on previous tours. At holiday time, look for the return of holiday tours.

Grogu and the Mandalorian arrive in Galaxy's Edge — debuted Nov. 18, 2022 — Guests can cross paths with the iconic bounty hunter himself, as well as the Child.

Disneyland After Dark: Villains Nite — March 8 and 10, 2022 — This Disneyland After Dark Party at Disney California Adventure was dark indeed, with a villain theme! This party had a Villains Cabaret with a cast of outlaws who sang and danced their way through a revue. Guests were spellbound by DJ-hosted dance parties and enjoyed character greetings with nefarious Disney fiends, fun photo-ops and themed food, drink, decor and merchandise. 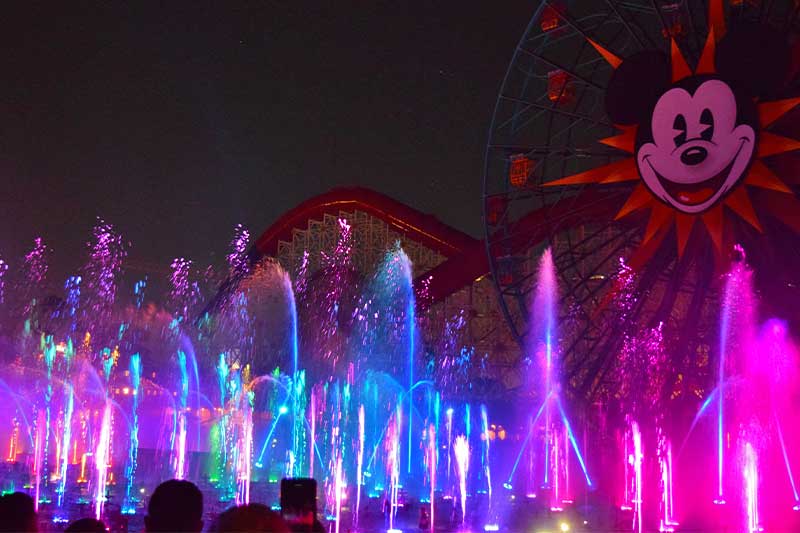 World of Color — returned April 22, 2022 — This spectacular nighttime water show returned this spring! The world is a carousel of color, and we can once again get swept away by the magical combination of music, fountains, fire, fog, lasers and projections from Disney and Pixar films. Our Disneyland World of Color post has all the details. 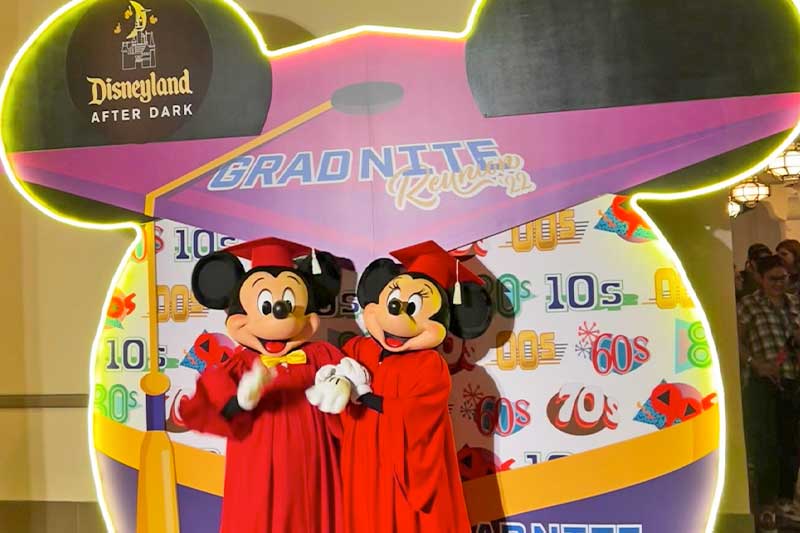 Downtown Disney Expansion — began in January 2022 — A multi-year project to expand this shopping, dining and entertainment space began in early 2022. The businesses west of the Monorail track (from Starbucks to Earl of Sandwich) closed and construction went underway and will continue through 2023. There's still much more to come!

"Nope" Set Coming to the Studio Tour — opened July 22, 2022 — For the first time ever, a movie set opened on the World-Famous Studio Tour to coincide with its theatrical release date! Guests encounter the original Jupiter’s Claim set from Jordan Peele’s expansive new horror epic, "Nope." The set is a permanent attraction on the tour.

Emperor — opened March 12, 2022 — Our happy feet are swinging with frogcitement for this new floorless, penguin-themed dive coaster, which opened just in time for spring break in 2022. With speeds over 60 mph and a steep plunge over 150 feet (and over 90 degrees), Emperor is now the tallest and fastest dive coaster in California. That makes sense to me, as the emperor penguin is the tallest of all of the penguins. 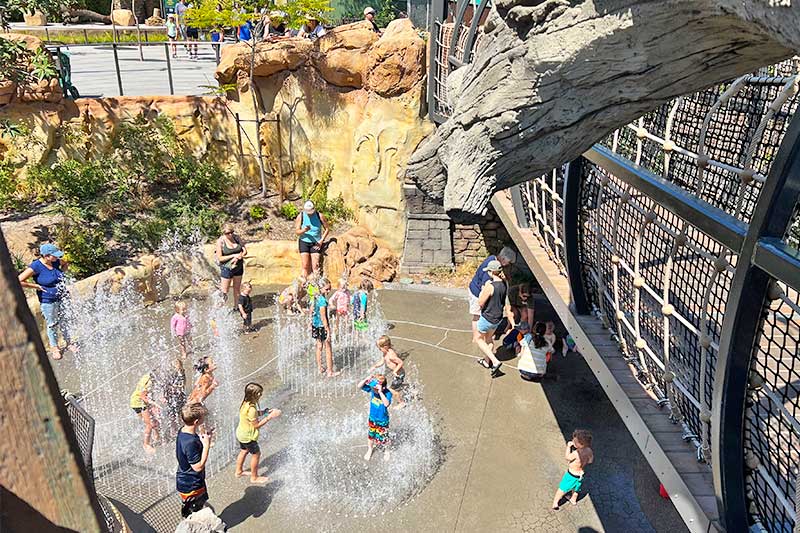 Wildlife Explorers Basecamp — opened March 11, 2022 — Your tadpoles can climb, scramble, and explore this new area, which replaces the former children's zoo. Bring a swimsuit for water play! It's a place where kids of all ages can learn about nature, play alongside animals, encounter new species and ultimately develop empathy for wildlife. The whole family can discover wildlife in four unique habitats: Rainforest, Desert Dunes, Marsh Meadows and Wild Woods. There are indoor and outdoor exhibits. The tadpoles enjoyed meeting the amazing species at the Spineless Marvels insect and spider habitats and at Jake’s Cool Critters — a place for reptiles, amphibians and more. 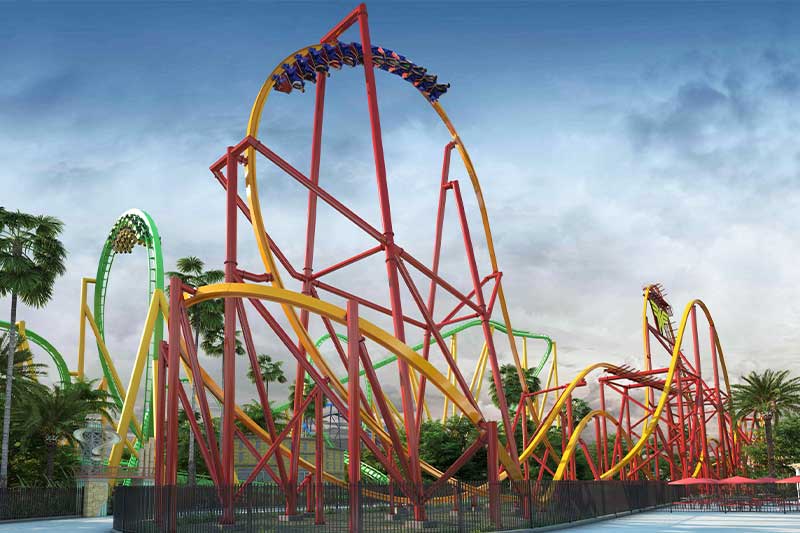 WONDER WOMAN Flight of Courage — opened July 16, 2022 — Six Flags introduced its 20th coaster, and it's a record-breaker. The new thrill ride is the tallest and longest single-rail coaster on the planet! The new coaster reaches 58 mph after climbing a 131-foot-tall lift hill and descending an 87-degree first drop. The ride’s four 12-passenger trains travel over a 3,300-foot-long track featuring three inversions — a raven dive, zero-gravity roll and 180-degree stall. It has a Greek-inspired entrance and queue area.

I hope you've enjoyed this overview of what opened at Disneyland Resort and Universal Studios Hollywood in 2022. Don't froget that you can see what's coming to the parks in 2023 and beyond!

Related: How to Plan for a Disneyland Trip in 2023