What Opened at Disney World and Universal Orlando in 2019

'Sup! Welcome to Tad's toadally awesome list of what opened at Walt Disney World, Universal Orlando Resort and the other Orlando theme parks in 2019! You may know me as the Frog Fam's resident thrill-seeker and videographer, and let me just say, 2019 had no shortage of excitement! (Hop here to see what opened in 2018 and previous years.) In 2019, we ventured to a galaxy far, far away at Disney's Hollywood Studios, as Star Wars: Galaxy's Edge made its out-of-this-world debut, immersing guests into their very own Star Wars story through incredible details, experiences and of course, highly anticipated attractions such as Star Wars: Rise of the Resistance. Disney Skyliner took to the skies as a brand-new method of park transportation, allowing guests to soar on the "Most Magical Flight on Earth." Over at Universal Orlando Resort, guests were able to hop aboard a motorbike (sidecar or driver!) and travel into the Forbidden Forest on Hagrid's Magical Creatures Motorbike Adventure. And Universal's first-ever, on-property Value hotel, Surfside Inn and Suites (part of Universal's Endless Summer Resort), invited guests to hang ten in one of its 750 toadally rad rooms (over half of which are Family Suites!).

This post is super hopful if you haven't been to the parks in a few years, and you've got a trip coming up! Use it alongside my post of what's opening in the parks in 2020 and beyond to map out your can't-miss stops. Use the Quick Links below if you want to jump to a certain park ... and don't froget to check out my videos as you read for a front row seat of the action! Let's hop to it! 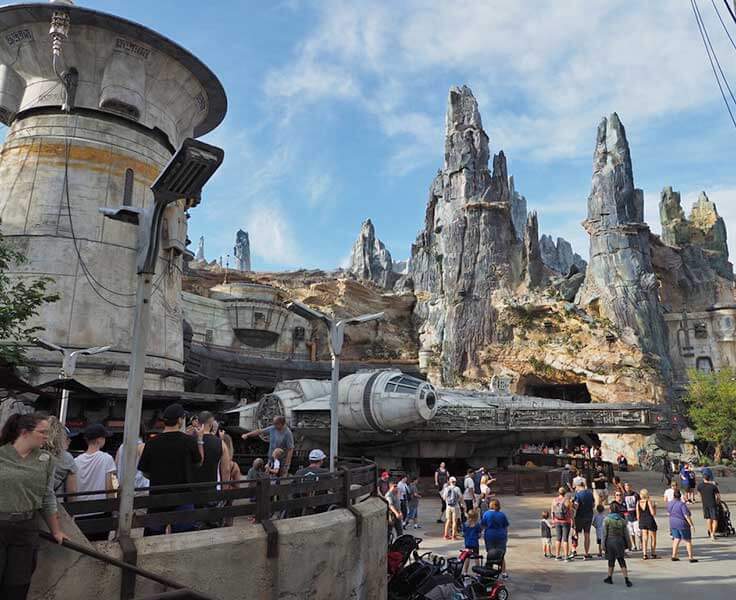 What Opened at Walt Disney World Resort in 2019

Municiberg — started Jan. 18, 2019 — Pixar Place has transformed into the hometown of The Incredibles, where a party is being held in their honor ... complete with Mr. Incredible, Mrs. Incredible and Frozone. Oh, and the oh-so-fashionable Edna Mode finally has her own meet-and-greet. Be sure to keep an eye out for signs of the mischievous Jack-Jack, as well.

Mike and Sulley Meet-and-Greet — started Jan. 18, 2019 — Mike and Sulley of Monsters, Inc. fame have made their grand return to Hollywood Studios for a meet-and-greet.

Lightning McQueen’s Racing Academy — now showing — A new show has arrived near Rock 'n' Rollercoaster, in which Lightning McQueen showcases all of his tricks of the trade ... but things don't always go according to plan! This new show features animatronic cars (your fave characters, of course) and lots of surprises.

Millennium Falcon: Smuggler's Run — now open — Guests become the flight crew for this super immersive ride on the fastest ship in the galaxy. 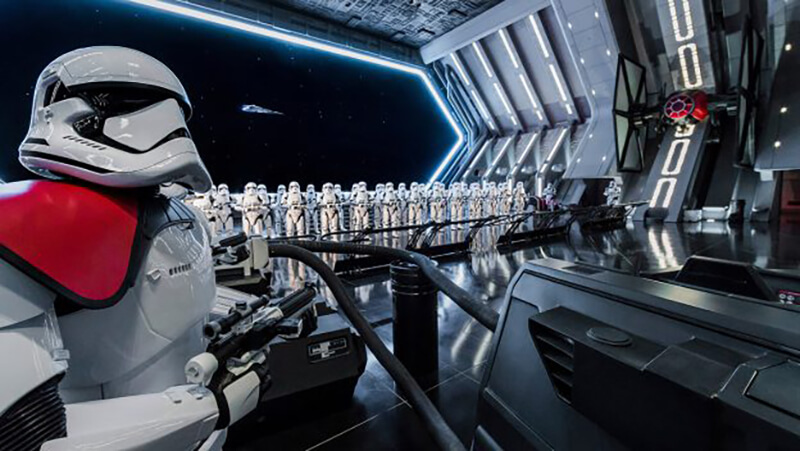 Mickey and Minnie Greeting Guests Together! — started Jan. 18, 2019, and ended Sept. 30, 2019 — As part of Mickey & Minnie's Surprise Celebration, on account of Mickey turning 90, these two love birds (ahem, mice) greeted guests together at Town Square Theater in brand-new outfits! Guests were able to sign a guestbook to let Mickey and Minnie know how much they love them! 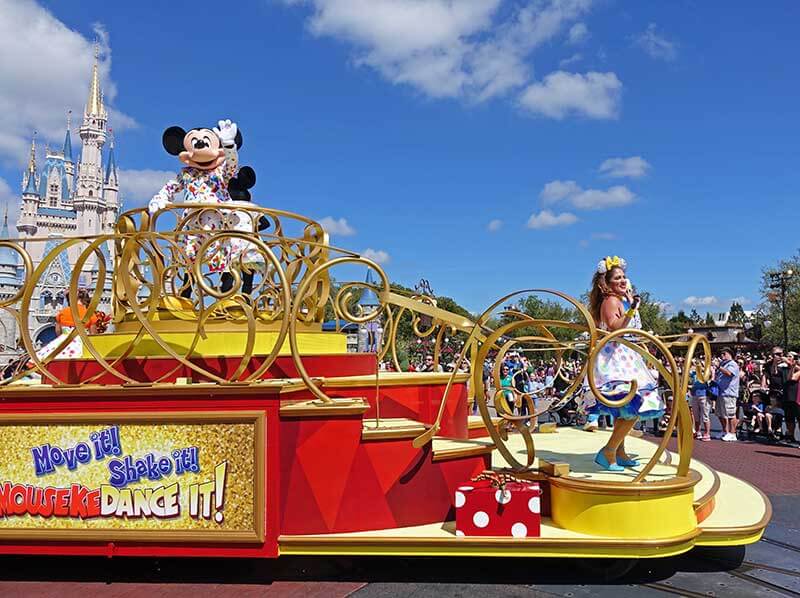 Move It! Shake It! MousekeDance It! Street Party — started Jan. 18, 2019, and ended Sept. 30, 2019 — Mickey, Minnie and pals joined together during this afternoon street party that played several times daily during Mickey & Minnie's Surprise Celebration! A brand-new song, "It's a Good Time," debuted just for the occasion. 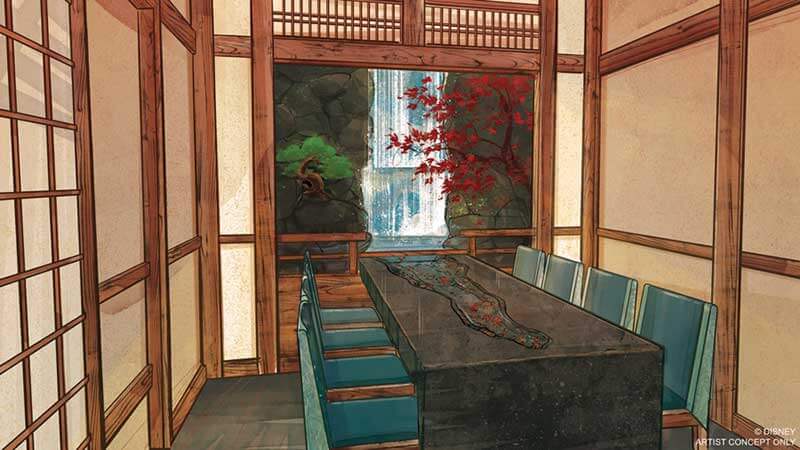 Epcot Forever — now showing — Illuminations: Reflections of Earth came to a close at the end of September and has been replaced by a limited-time fireworks show, Epcot Forever. This show focuses on the music and fun of Epcot's past and present attractions. It features fireworks, laser and light effects and special kites. Fun fact: The fireworks are even environmentally-friendly, as they are made out of cornmeal instead of cardboard. 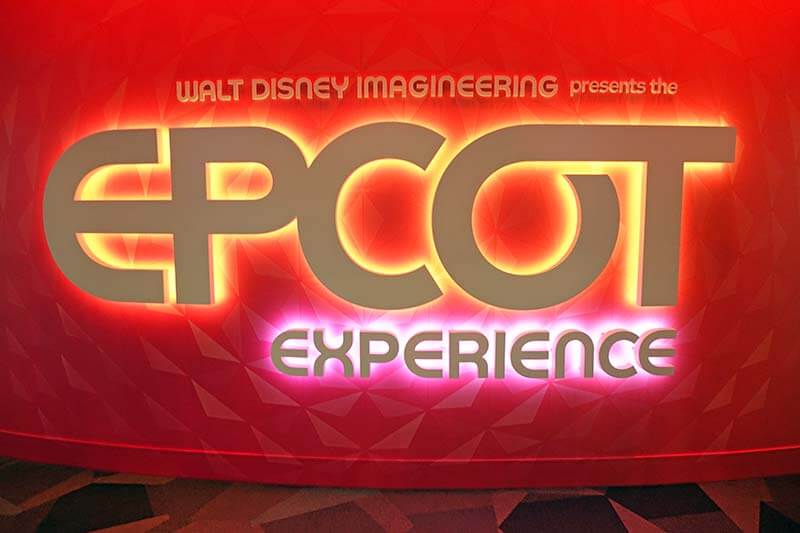 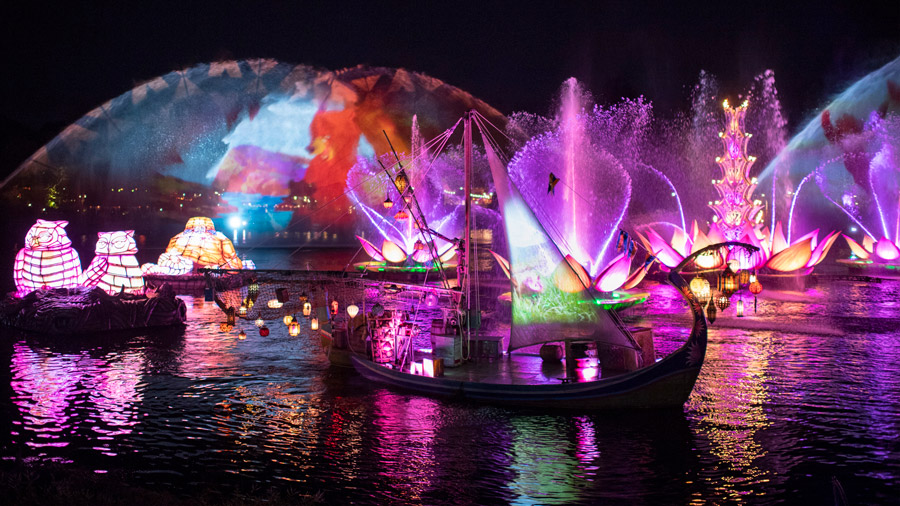 Rivers of Light: We Are One — now showing — An updated version of the park's beloved nighttime pageant, featuring additional imagery from both Disneynature films and animated films alike, has come to life.

Tree of Life Projection Show — ended Sept. 30, 2019 — The Tree of Life debuted a new summer projection show that paid tribute to the special anniversary of "The Lion King." 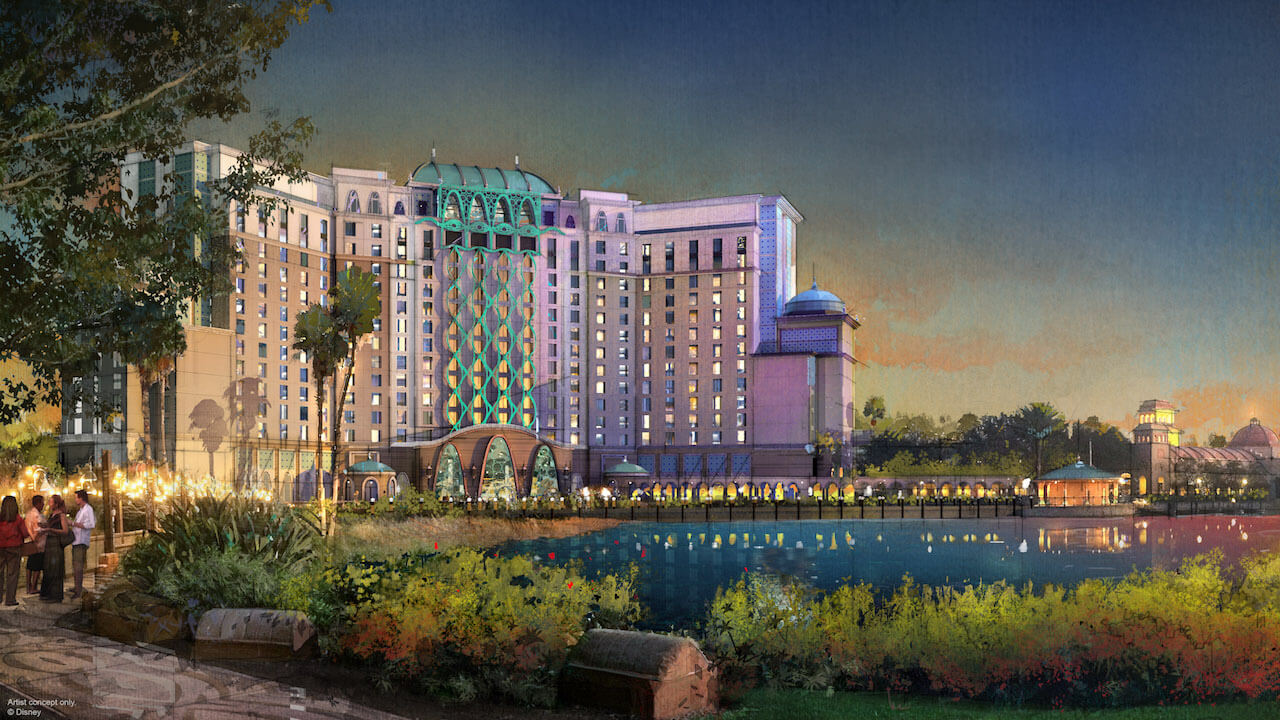 Gran Destino Tower - Disney's Coronado Springs Resort expansion — now open — The new, 15-story tower is the main entrance point for hotel resort guests and adds 545 guest rooms, including 50 suites and a new, two-story lobby. A themed table-service restaurant sits atop the tower and offer views of the resort. A second restaurant, Villa del Lago, opened on an island in the middle of the resort's 14-acre lake.

Enchanted Rose at Disney's Grand Floridian Resort & Spa — now open — A "Beauty and the Beast"-inspired bar and lounge has replaced the former Mizner's Lounge and Commander Porter's shop at the Grand Floridian. Filled with elegant decor, it features a chandelier inspired by Belle's ball gown, a formal library, a garden room and an outdoor patio.

Disney's Riviera Resort — now open — Disney Vacation Club's 15th property offers about 300 family-friendly vacation homes, including deluxe studios, one- and two-bedroom villas and grand villas that sleep up to 12 guests. It has a stop along Disney Skyliner, which transports guests between Epcot and Disney's Hollywood Studios. Disney's Riviera Resort has a rooftop signature table-service restaurant called Topolino's Terrace - Flavors of the Riviera and views of nighttime shows at Epcot and Hollywood Studios. "Topolino" is the Italian name for Mickey Mouse. The restaurant features an expo kitchen and wood-burning grill, and serves authentic French and Italian dishes. It also offers a character breakfast option.

NBA Experience at Walt Disney World — now open — Located in the space formerly occupied by DisneyQuest, this NBA fan's dream includes interactive games and immersive experiences that allow you to shoot hoops and dunk balls. It also features a retail store and an adjacent restaurant.

City Works Eatery & Pour House  — 2019 — The seventh of its kind in the country, City Works will offer 80 beers on tap and a menu of American food sure to delight every member of your frog fam.

Ron Jon Surf Shop  — now open — This 10,000-square-foot shop opened up just in time for the holidays inside Town Center.

What Opened at Universal Orlando Resort in 2019

Hagrid's Magical Creatures Motorbike Adventure — now open — Ready to take a ride with Hagrid? Hop on his motorbike for a wild roller coaster ride that has guests soaring along with some of the Wizarding World's most magical creatures. Hagrid's Magical Creatures Motorbike Adventure sits where Dragon Challenge was located inside The Wizarding World of Harry Potter at Hogsmeade. This "highly themed coaster experience" more fully immerses guests in the Wizarding World — including the Forbidden Forest! — where they can encounter favorite characters and other creatures while reaching speeds of up to 50 mph! Your experience is different depending on whether you're on the enchanted motorbike or in the sidecar.

TODAY Cafe — now open — Step inside a recreated Studio 1A, where the TODAY Show broadcasts live, for some quick eats! This themed cafe is serving up fresh pastries, sandwiches, salads and coffee. 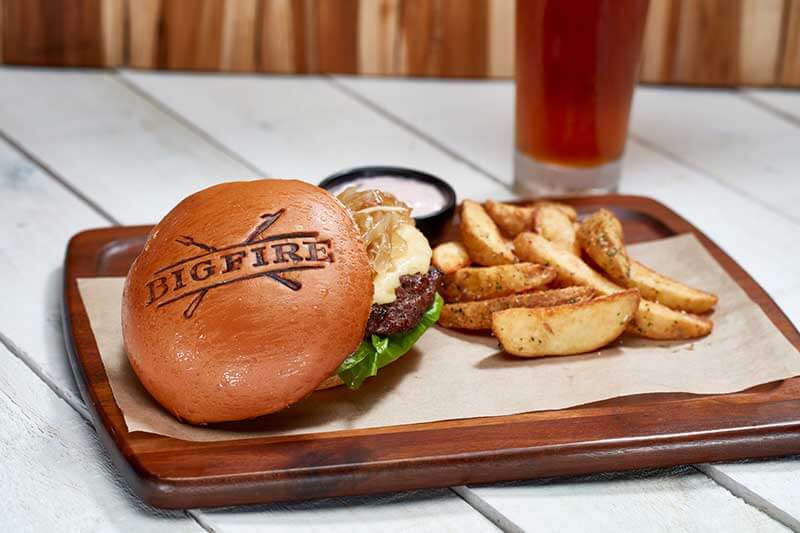 Bigfire — now open — This new rustic-themed restaurant serves up bison burgers, coffee-and-cocoa-rubbed steak and smoked salads, inspired by an open-fire cooking style. The decor includes a suspended canoe and twinkling lights and lanterns to top off the outdoorsy ambience.

What Opened at Other Florida Theme Parks in 2019

THE LEGO MOVIE WORLD — now open — Everything is awesome, indeed! The Quest for Chi has been transformed into a new LEGO MOVIE boat ride in addition to two new rides, character meet-and-greets and a fun playscape. Lily and I *demand* to meet Princess Unikitty ASAP.

Sesame Street Land — now open — Can you tell me how to get to Sesame Street? It's at SeaWorld Orlando! The new land, which has recreated the beloved Sesame Street neighborhood, opened in March 2019. You can explore Big Bird's nest and Hooper's Store ... and even knock on Oscar's trash can! Check out our full Sesame Street Land guide to see what you can expect.

I hope you've toadally dug my list of what opened at Disney World and Universal in 2019! Don't froget, you can see what's coming to the parks in 2020 and beyond, too. Hop on over to our When to Visit Orlando page for more planning tips, part of our Orlando Planning Timeline!