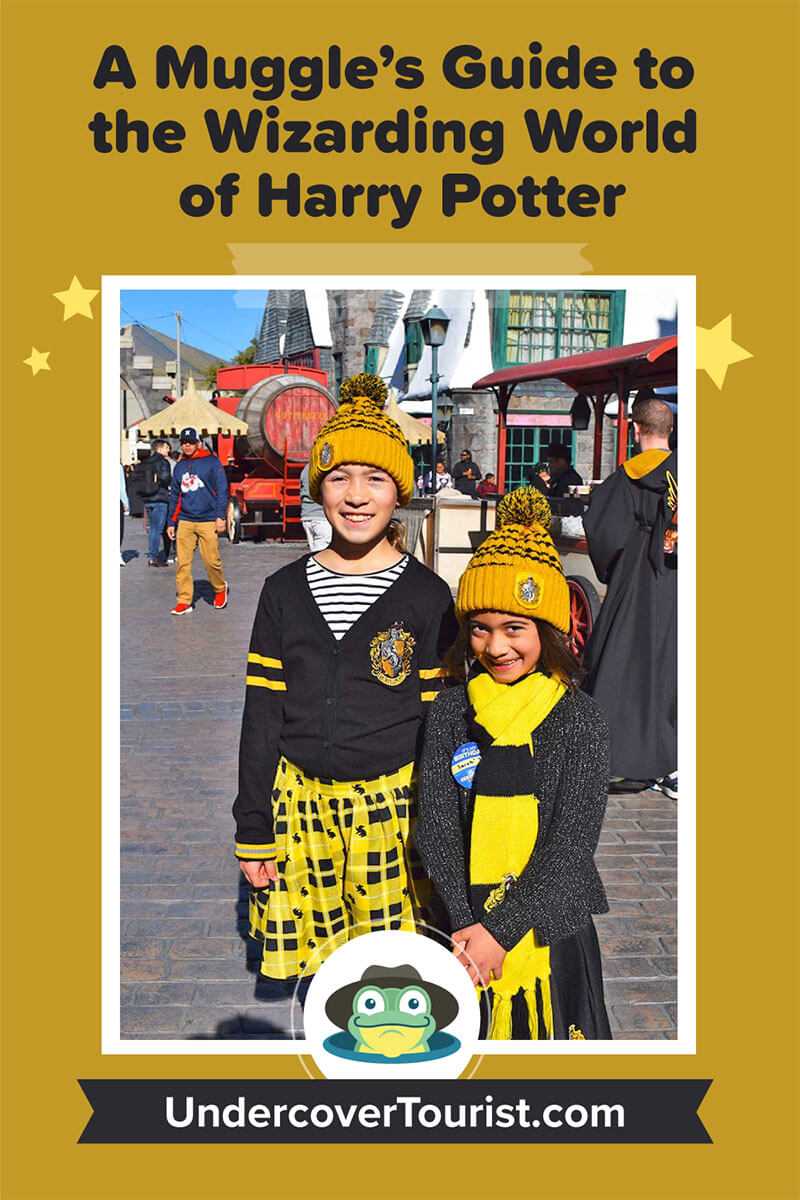 There are seven books and eight movies, so we cannot possibly get into all the details of Harry Potter’s world, but these are the basics. (Without too many spoilers if you are about to delve into the series.) The books are toadally brilliant, BTW, so hopfully your visit will inspire you to read them. 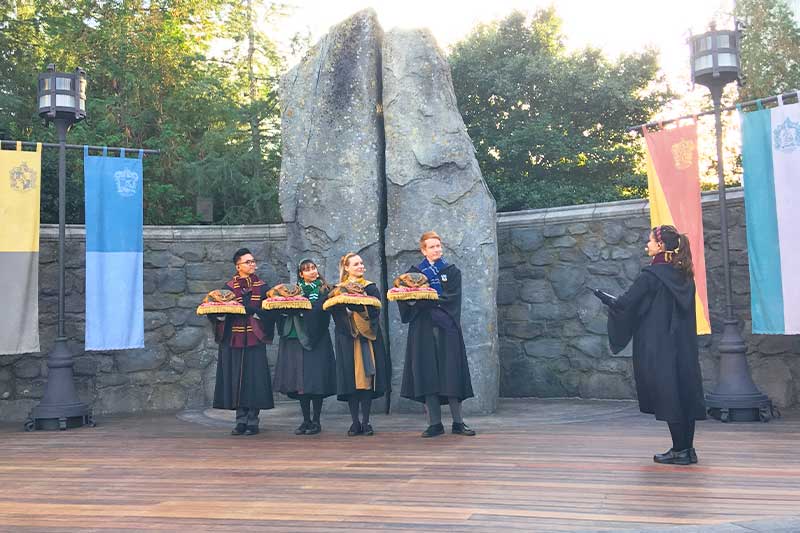 First off, what's a muggle? A muggle is simply a nonmagical person. In the Harry Potter books and movies, you have two major kinds of people in the world living among each other, the muggles — people with no magical skills and likely no knowledge of the magical world — and magical folk.

The magical folk are witches and wizards. These are not your Halloween witches, but rather regular people who happen to be gifted with powers. They wear robes, fly on broomsticks, use wands to cast spells and usually pass their magical genes down to their children. Some may live among their muggle neighbors in secret, but some live in magical villages along with other wizarding folk and really have limited knowledge of muggles. They do not use cars or telephones or even electricity. They communicate via fireplaces and owls, travel in mysterious ways and use magic to light up a room.

Wizard children go off to magical schools to learn their craft. British children generally attend Hogwarts School of Witchcraft and Wizardry, a boarding school, run by headmaster Albus Dumbledore. And that's the castle in this land.

Hogwarts is a magical castle that students are invited to attend. Wizard children receive their letter of acceptance via an owl on their 11th birthday (owls are a common way to send messages and packages in the wizarding world). This is how Harry Potter learns he is a wizard and embarks on a journey to Hogwarts. See, you are not much different from Harry encountering the Wizarding World for the first time, since it's all new to him too! 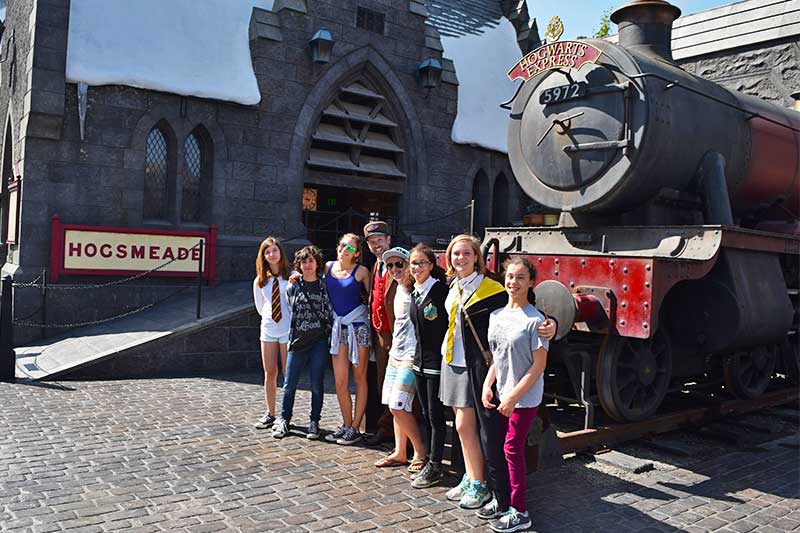 Wizard tweens and teens take a magical train to get to Hogwarts, The Hogwarts Express (you’ll see it as soon as you enter the Wizarding World). This is the train ride where Harry encounters delicious magical treats and starts to get to know his soon-to-be best friends, Ron Weasley and Hermione Granger. Ron is from a large family of wizards. Hermione is a talented witch who was born to muggle parents, and she’s the smartest and most talented one in their grade. But she also had no knowledge of witches and wizards until she got her letter. 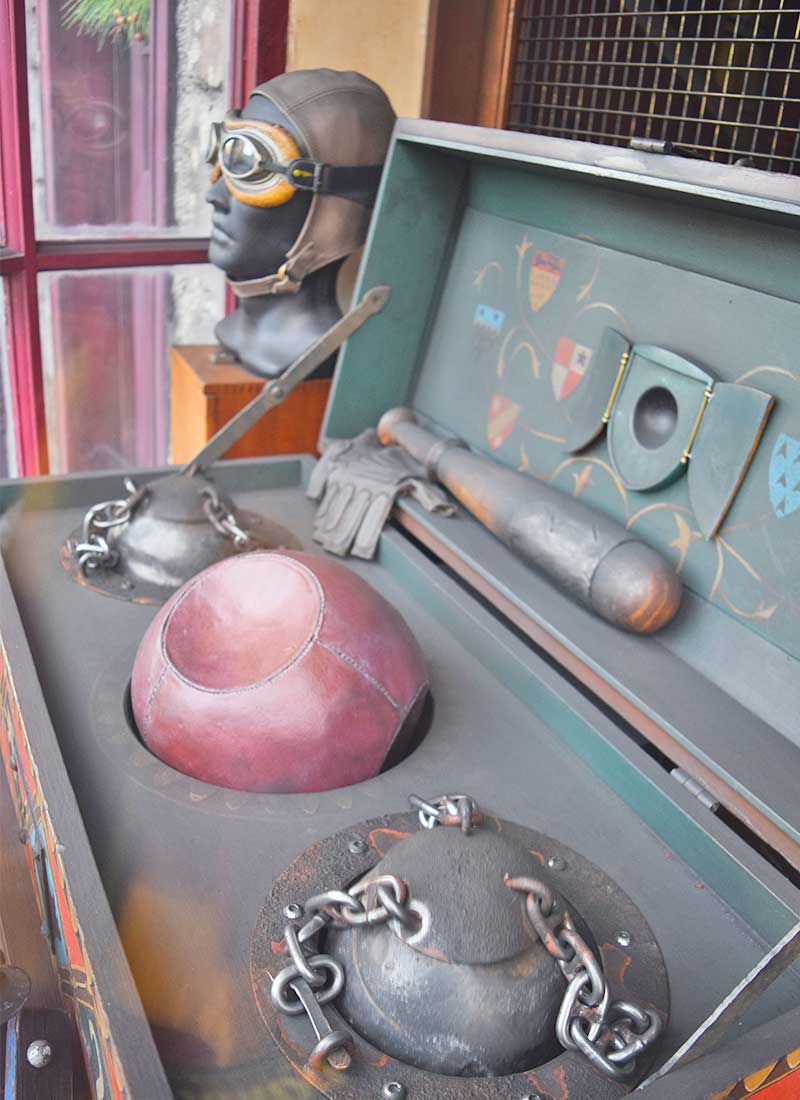 Once the kids arrive at Hogwarts they are sorted (by a Sorting Hat) into one of four houses. Dining tables and dormitories (and sometimes classes) are divided up by house. The houses at Hogwarts are Ravenclaw, Hufflepuff, Gyffindor and Slytherin. Harry, Ron and Hermione are sorted into Gryffindor.

The houses compete against the other houses in sports and earn or lose points for their house by their behavior. The house with the most points at the end of the school year earns the House Cup, a great honor. The most popular wizarding sport is Quidditch, which is played on broomstick with a variety of balls and batlike instruments called bludgers. You’ll see many visitors to Universal Studios wearing wizard robes and their house colors. I often wear my Gryffindor robe and scarlet and gold scarf when I visit. Dressing up is part of living the fantasy! Plus a robe gives you a place to store your wand!

Shopping and Getting a Wand in the Wizarding World 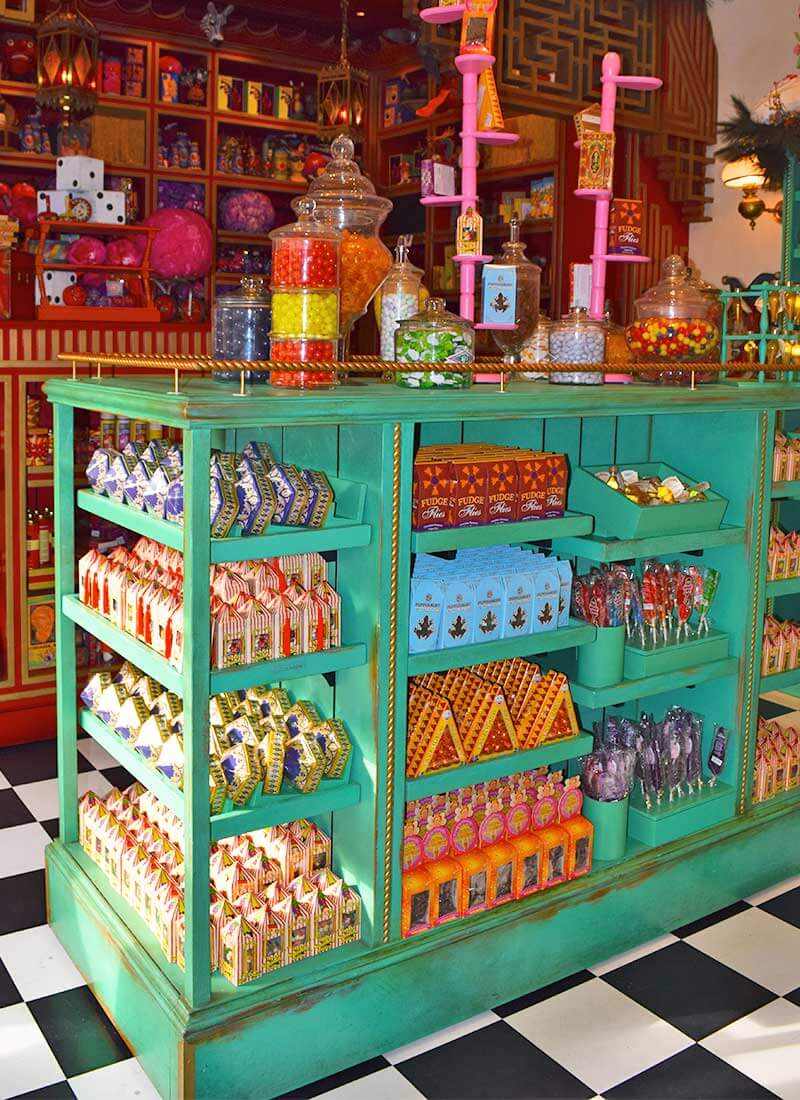 You’ll want to hop over to our Guide to the Wizarding World Hollywood to get an overview of the land before you visit. The land immerses visitors into a magical English village called Hogsmeade. It's located next to Hogwarts, where the kids go to school. Hogsmeade has shops the students might encounter in their world. Hop into Honeydukes sweet shop for candies and confections mentioned in the books. Zonko's toy shop has wizard tricks and toys. Clothing shops sell souvenirs or clothing needed in the Wizarding World.

One of the most exciting times for a young wizard about to embark on his or her magical education is the trip to get that first magic wand. You can witness a wand pairing that truly follows the experience that Harry had when he got his first wand. Hop into Ollivanders Makers of Fine Wands Since 382 BC. A wand maker will choose a child or young adult from the audience to find their wand. The child will use wands to cast spells until they find the perfect fit. You see, the wand chooses the wizard. And a wizard will never get as good results when using another wizard’s wand. 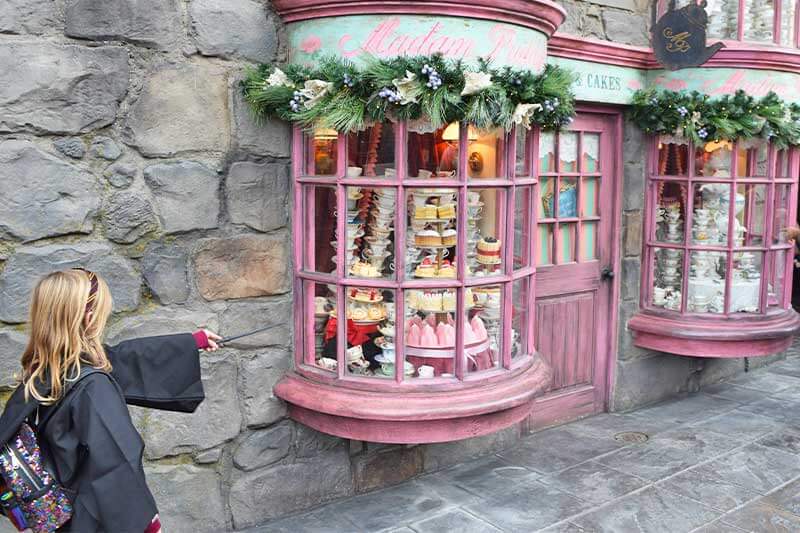 The wand pairing exits into the wand shop so you can shop for your own wand. The wand shop sells wands that are replicas of a character’s wand, or other wands that are not connected to characters. The interactive wands are used to cast spells in shop windows and other locations throughout Hogsmeade, which is really fun. Tad goes into this more in his posts on choosing a wand in the Wizarding World Hollywood and has even more details on the actual spells in his post on casting spells in the Wizarding World. 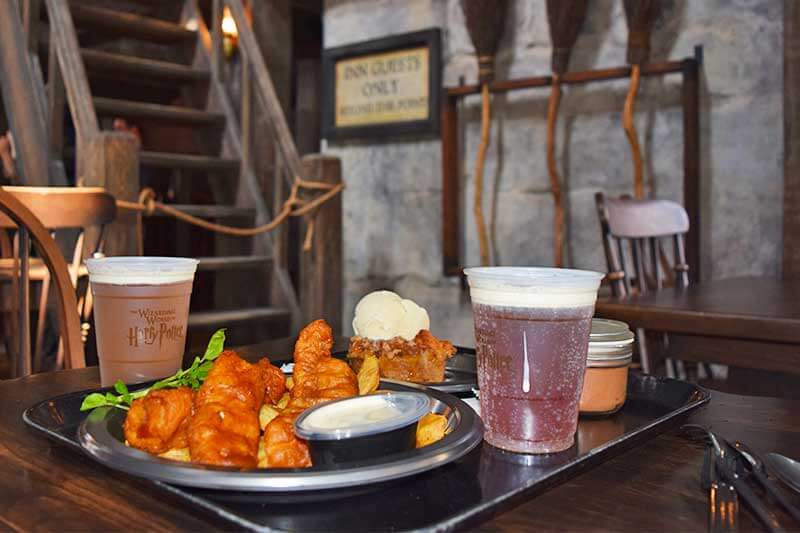 You do not need any special knowledge to enjoy the best food and drink in the Wizarding World Hollywood. Hop into the Three Broomsticks for English pub food. It’s quite filling and yummy too. Specialty beer, whiskey, and other adult drinks are available next door at the Hog’s Head. Harry and his friends love to enjoy a cup of Butterbeer. It’s nonalcoholic and you, too, can enjoy three kinds of Butterbeer in the land — cold, frozen and hot. Butterbeer is a butterscotch-flavored drink. You do not need to be a wizard to enjoy wizarding candies and handmade treats at Honeydukes. Hop into the Hog's Head for adult drinks such as themed beers, fire whiskey and mixed drinks.

Rides in the Wizarding World 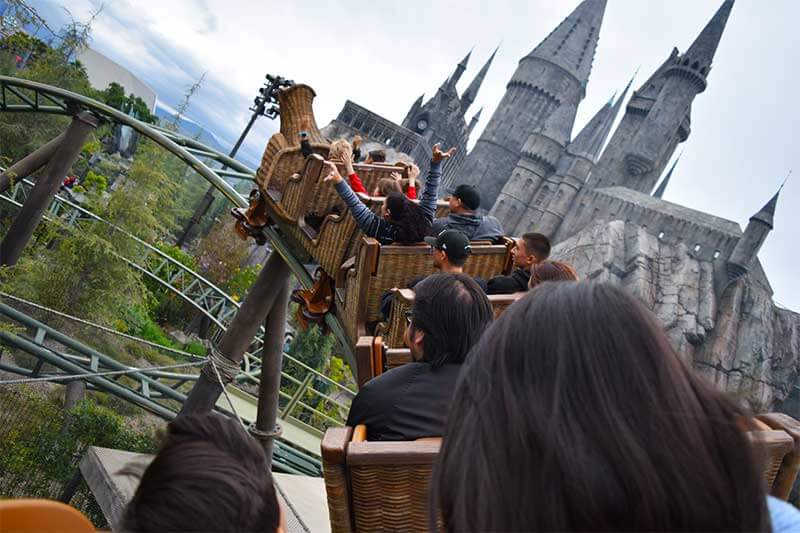 Finally, at the back of the land you’ll come upon the castle and two rides. Flight of the Hippogriff is a family-friendly outdoor roller coaster. A hippogriff is a magical creature whose front half is eagle and back half is horse. You’ll go past the hippogriff Buckbeak’s nest on the ride. This is a good beginner coaster for young tadpoles or people who like a gentle coaster with great views of the land. 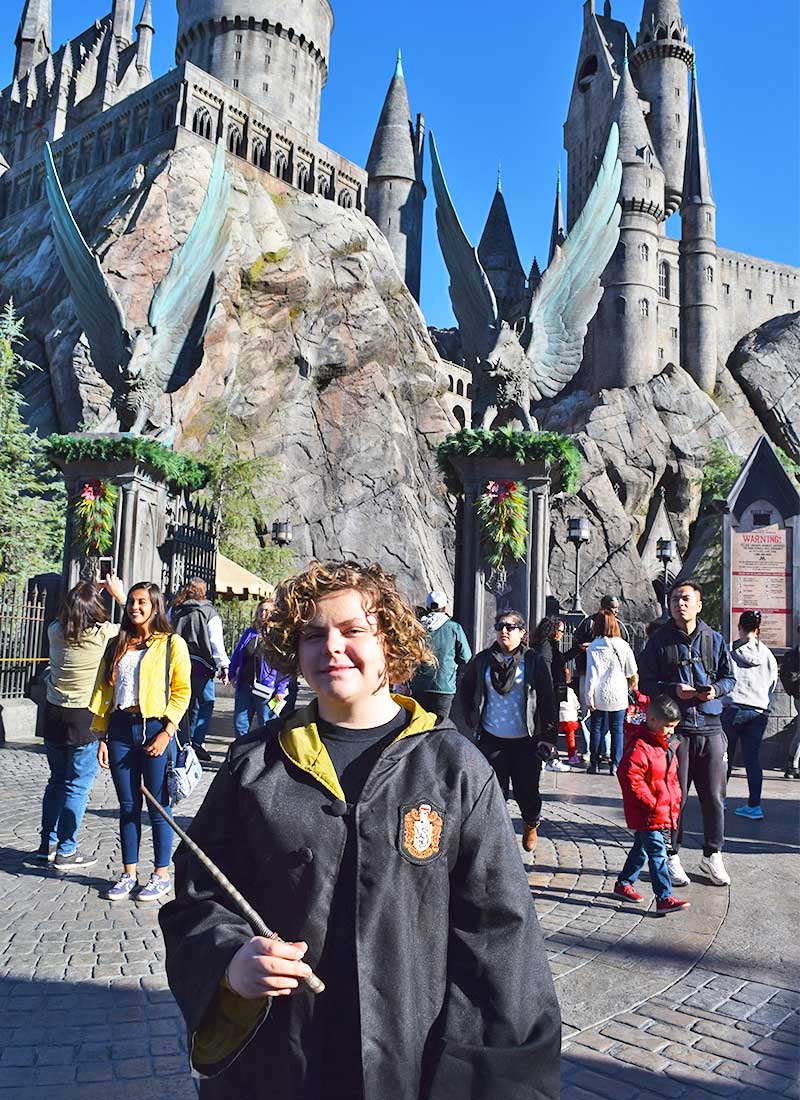 The castle contains the biggest and most popular ride, Harry Potter and the Forbidden Journey. You’ll need to store all loose items in a free locker before hopping in line. The queue weaves through the castle. It has many scenes that would delight Harry Potter fans and give a taste of the magical world to newcomers. You’ll encounter talking portraits, the headmaster’s study and a Defense Against the Dark Arts classroom where Harry, Ron and Hermione talk to you. You’ll pass through the Gryffindor common room and past the sorting hat before boarding the ride.

Once you strap in, Hermione will cast a spell on your ride seat to lift you into the air. You’ll follow Harry and Ron on broomsticks in and out of the castle. You’ll experience a game of quidditch and encounter many magical and scary creatures that appear in the books. We are talking dragons, giant spiders and moving trees. The scariest, to me at least, are the dementors, hooded creatures who want to suck your soul from your body. This ride has a mix of video and animatronics. As much as I love it, it does make me feel a little greener than usual, so I either plan ahead by taking medicine for motion sickness, or I just close my eyes during the video portions.

Even if you are muggle with no knowledge of the wizarding world, you can still enjoy the rides, foods and details. Hopfully this muggle’s guide to the Wizarding World of Harry Potter inspires you to read the books and watch the movies so you can delve deeper into this magical land.

As a newcomer to Harry Potter, you might be hopping with questions about the Wizarding World that we have not covered in our Muggle’s guide to the Wizarding World of Harry Potter. Please ask in the comments section below. If you are looking to save money on your trip to Los Angeles, Undercover Tourist can help you find hoppin’ deals on discount theme park tickets for Universal Studios Hollywood and discount hotel stays.

SAVE $16 vs Adult gate price