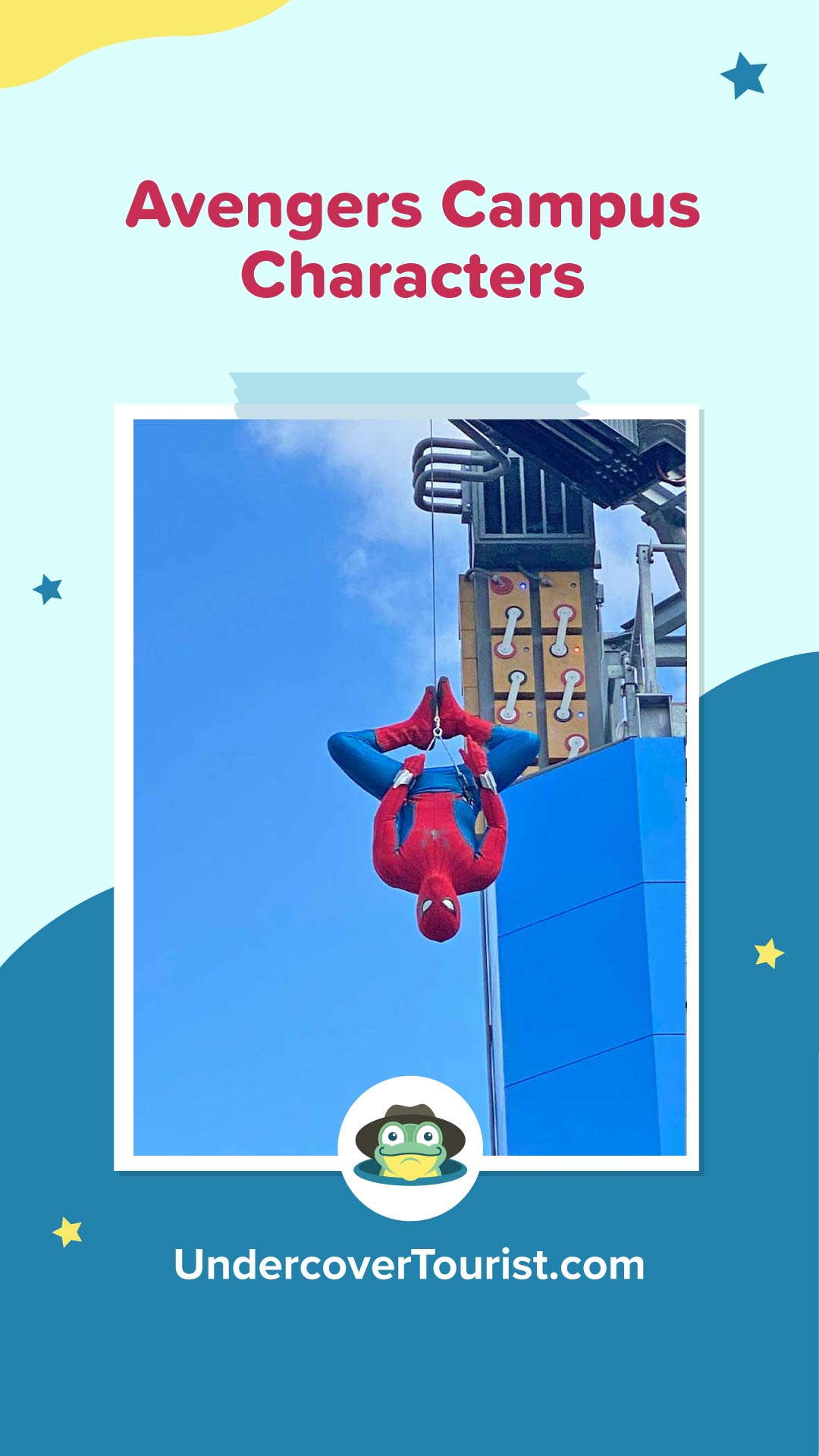 In Avengers Campus at Disney California Adventure Park, it’s all about the characters (OK, and about the food and rides, too, but even these experiences were inspired by the Super Heroes themselves). Not only can you meet and talk to Super Heroes, but you can watch them spring into action — quite literally! When you ride the rides, you join the Avengers Campus characters in their mission and put your own skills to the test.

There are several things that set this land apart from all other Disneyland Resort lands when it comes to characters. Avengers Campus is a "home where Earth's mightiest heroes can assemble across time and space to freely share their technology, skills and knowledge with all." That means you can see different versions of the same character on the same day — such as Steve Rogers' Captain America and also Sam Wilson's Captain America. Or, and we offer no spoilers here, you might see characters who may have been killed off in stories interacting with characters who are still alive. The Avengers Campus characters get called to action right before your eyes. They may have something to teach you. They are looking for recruits to join them. Do you have what it takes? 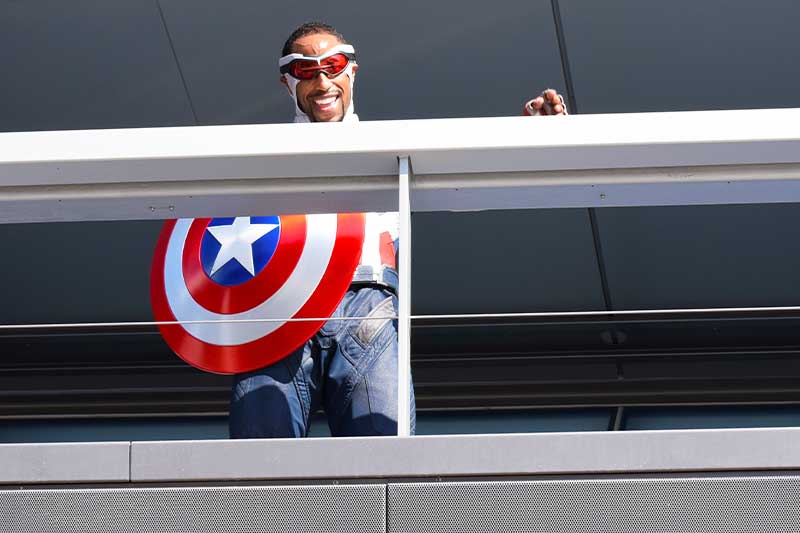 There is no set time period for this land when it comes to a storyline. The land has Super Heroes from all times. And yet, they exist in our current world and can talk with you about Disneyland even. Spider-Man even told us he could see a roller coaster from up on top of the building! Try talking about Disneyland in Star Wars: Galaxy’s Edge and the citizens of Batuu will look at you like you have two heads and may tell you Disneyland is a funny name and that they have never heard of it. It’s off-planet and not part of their world. That land is also set in a very specific time in the Star Wars timeline, which is why you see Kylo Ren and Rey, but would never see Darth Vader. You can read all about it in our guide to Star Wars: Galaxy's Edge characters. 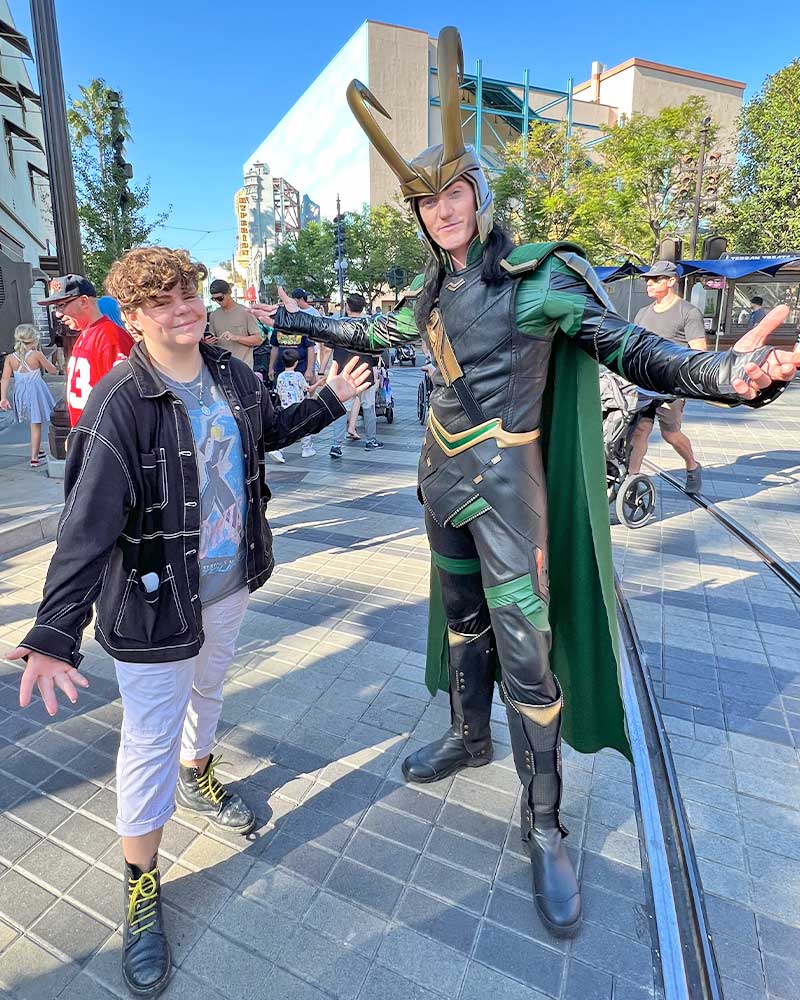 Avengers Campus has no limitations, and like Disneyland, it will never be completed as long as there is imagination left in the world. We have seen characters from new shows and movies make limited-time appearance. Plus, Agatha Harkness and zombie Captain America greeted guests during certain Oogie Boogie Bash parties during Halloween time! Through the holidays, guests were treated with a holiday stunt show (Monday through Wednesday) complete with props, music and bad puns. Characters such as Loki appeared with different outfits throughout the run of the Loki show. With all the upcoming Avengers movies and television shows, we can't wait to see what happens next!

Who Are the Avengers Campus Characters? 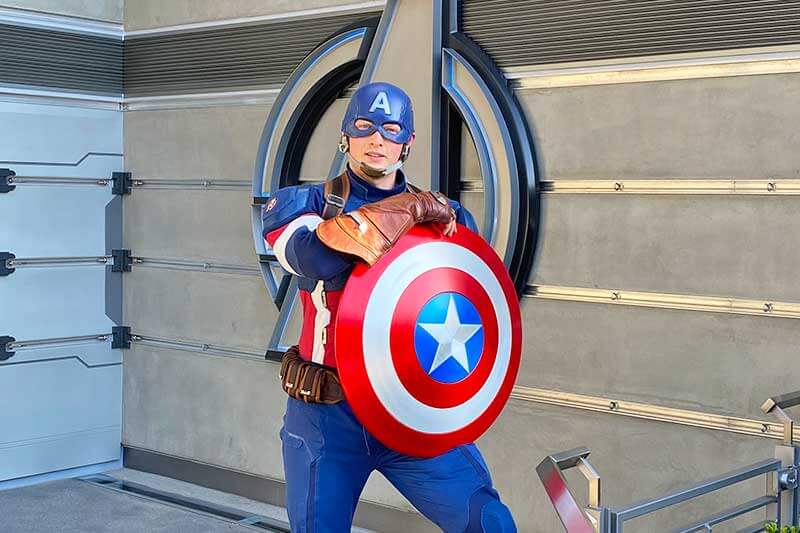 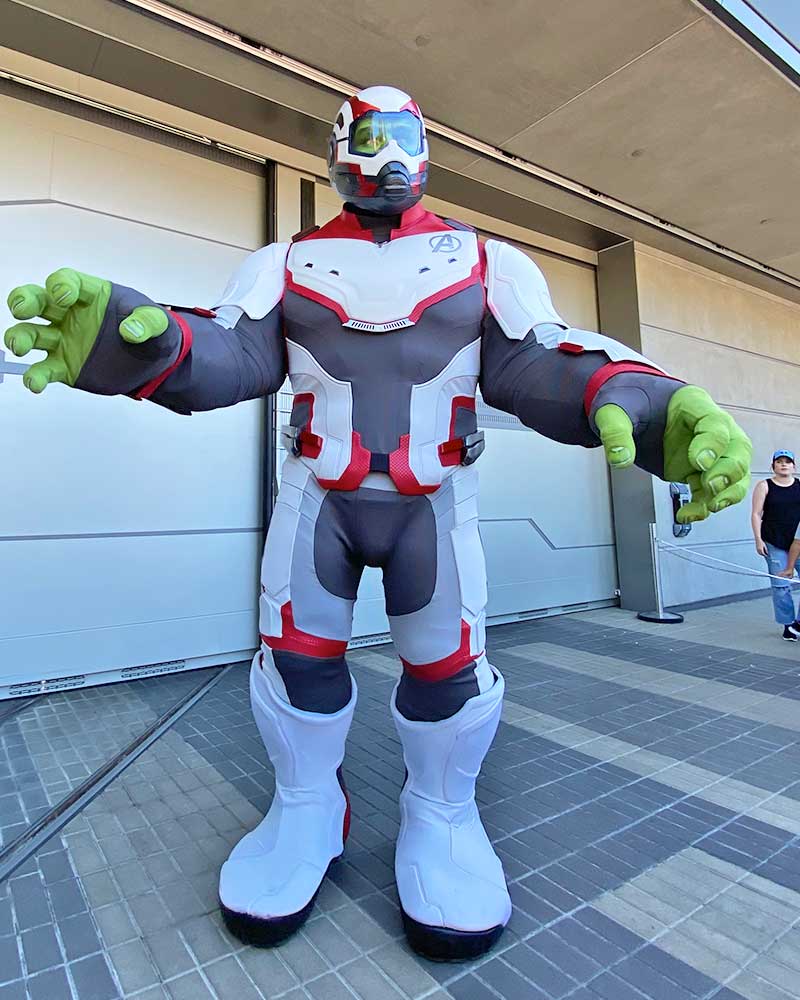 Characters that have appeared for a short time, but may or may not be there permanently: 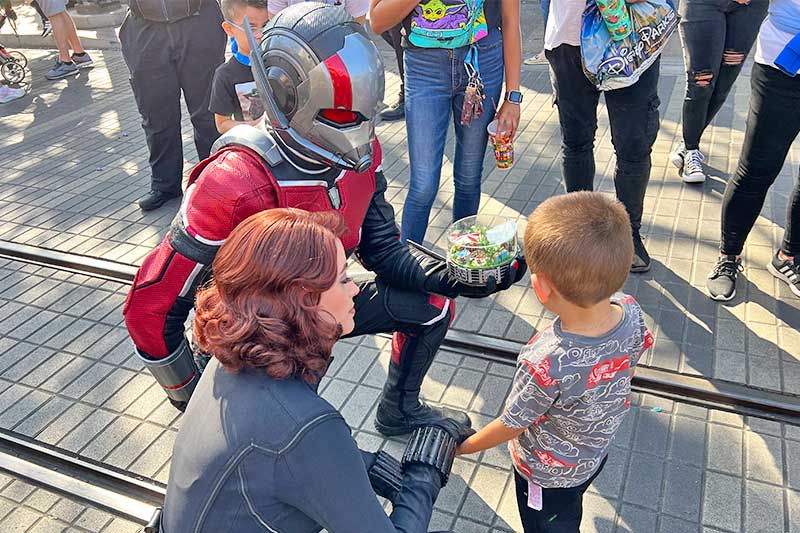 As more stories develop, you may see new Super Heroes come in and move out. You may also see a character’s look change to match a series on Disney+. When Avengers Campus first opened, we met Loki in his horns and more regal green ensemble. Then, as soon as the first episode of Loki came out on Disney+, changes to his ensemble occurred overnight! Loki was seen in his prison jumpsuit. The next week, he was wearing the most coveted Variant jacket, and showing it off too! Black widow has bee known to appear in black or white. It’s fun to see the characters change in tune with their character in a series. 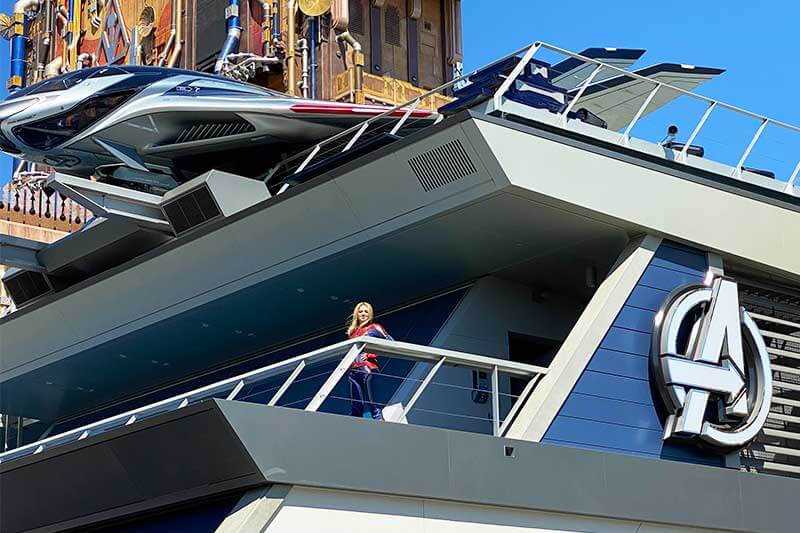 Keep in mind that Avengers Campus character meet-and-greets happen spontaneously. Remember that this is an active campus with real threats, so expect the unexpected! You won’t find character meet times on the app. They come and go as they please. Thor sometimes emerges from Doctor Strange's Sanctum door. If you have a particular character you’d like to meet in mind, ask an Avengers Campus cast member and they may be able to let you know if it’s worth sticking around a bit to see them or if they're off somewhere else fighting a battle or eating shawarma in New York.

Where to Meet Avengers Campus Characters? 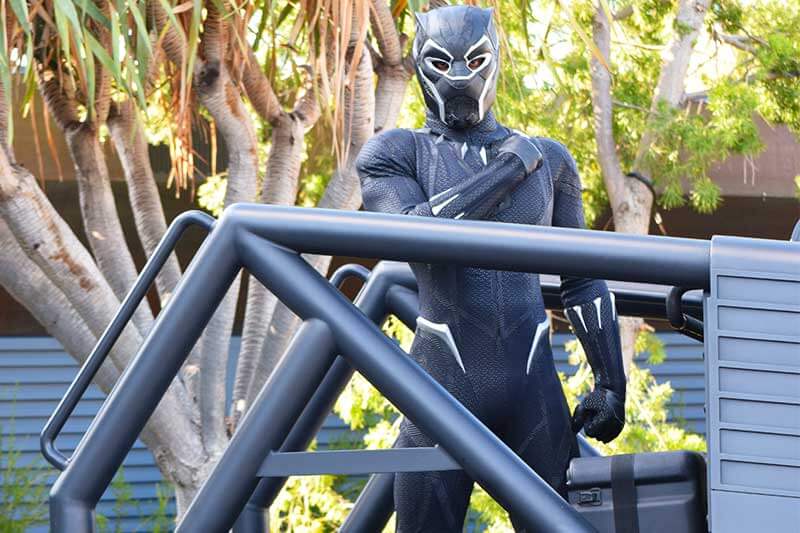 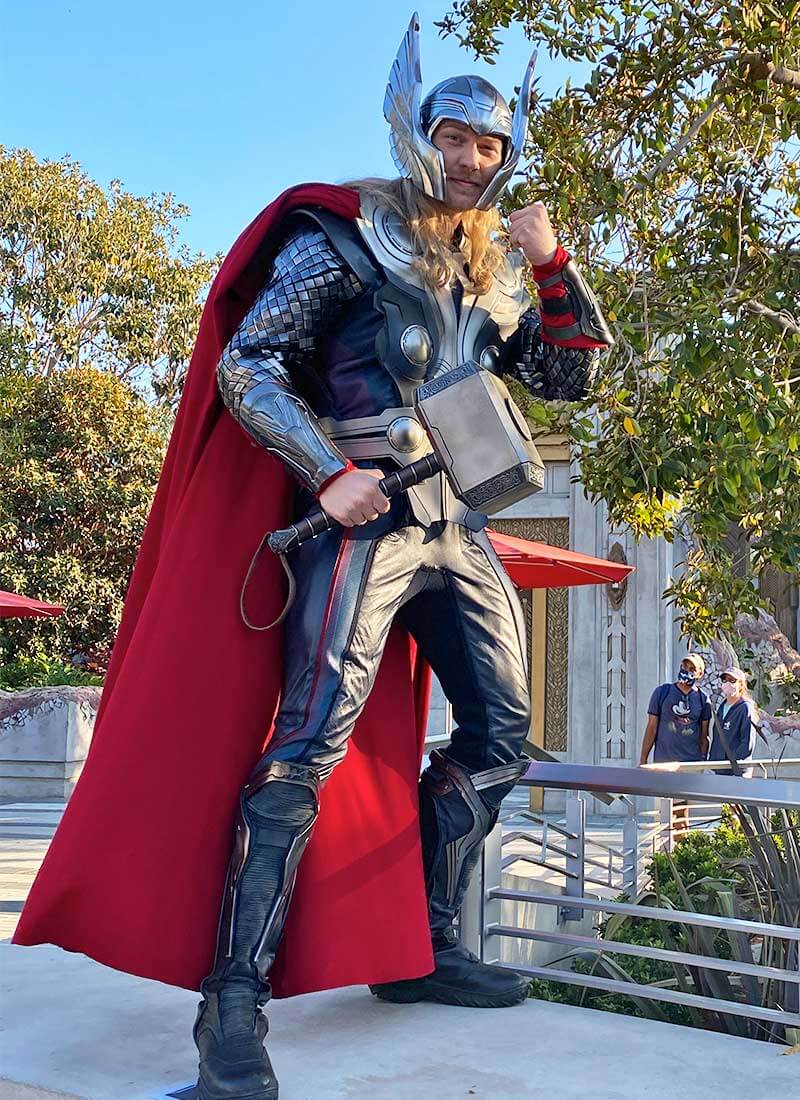 Some characters have designated meet-and-greet areas. You'll see Iron Man and Spider-Man with the most consistency in their areas. Most of the heroes can appear anywhere now that they do not have to stay distanced from each other and guests.

Spider-Man is a bit distanced from other Avengers. He will be dropping in (literally) to the graffiti area by the main entrance in front of the WEB Building. By the way, note who signed the wall. It's Miles (as in Miles Morales, who plays a new version of Spider-Man). Look for characters in these areas: 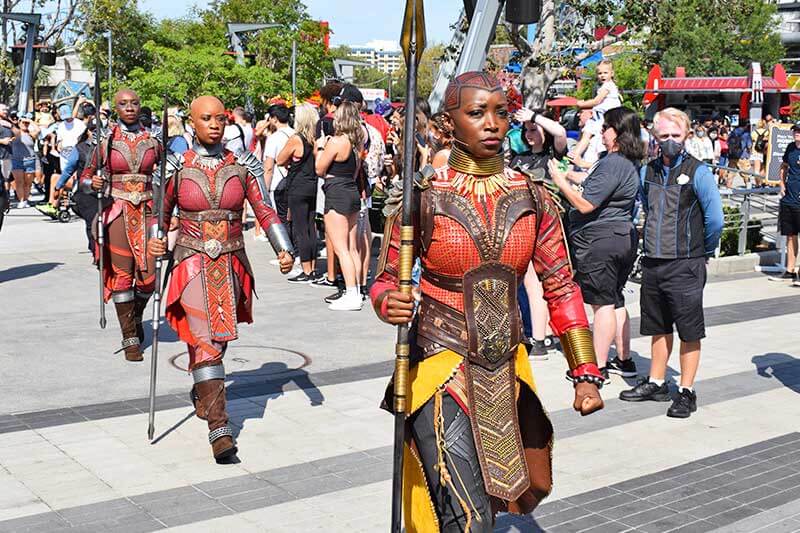 Some characters appear in shows and then meet guests. Others appear in shows and then take off. The shows may welcome you to Avengers Campus and show off skills, such as Spider-Man's aerodynamic stunts. Other times, you may see the character spring into action to fight a villain. The Dora Milaje have a training session, whereas Peter Quill (Star-Lord) and a reluctant Gamora try to engage you in a dance-off. You can find the showtimes in the Disneyland entertainment calendar and app so you’ll know what to expect during your visit.

Warriors of Wakanda: The Disciplines of the Dora Milaje

Shows generally run from 9:30 a.m. to 3:25 p.m. You'll feel a change in atmosphere when the powerful Dora Milaje make an entrance. General Okoye and the Dora Milaje will lead a training session on the raised seating area in the center of the campus and may interact with guests in shows and training.

To find shows, go to the park map in the Disneyland app. Fro the pull-down menu, select "Entertainment." Tap the magic hat icons to see the shows in that area and show times. The entertainment schedule on the Disneyland site may also list the show times for Avengers Campus. 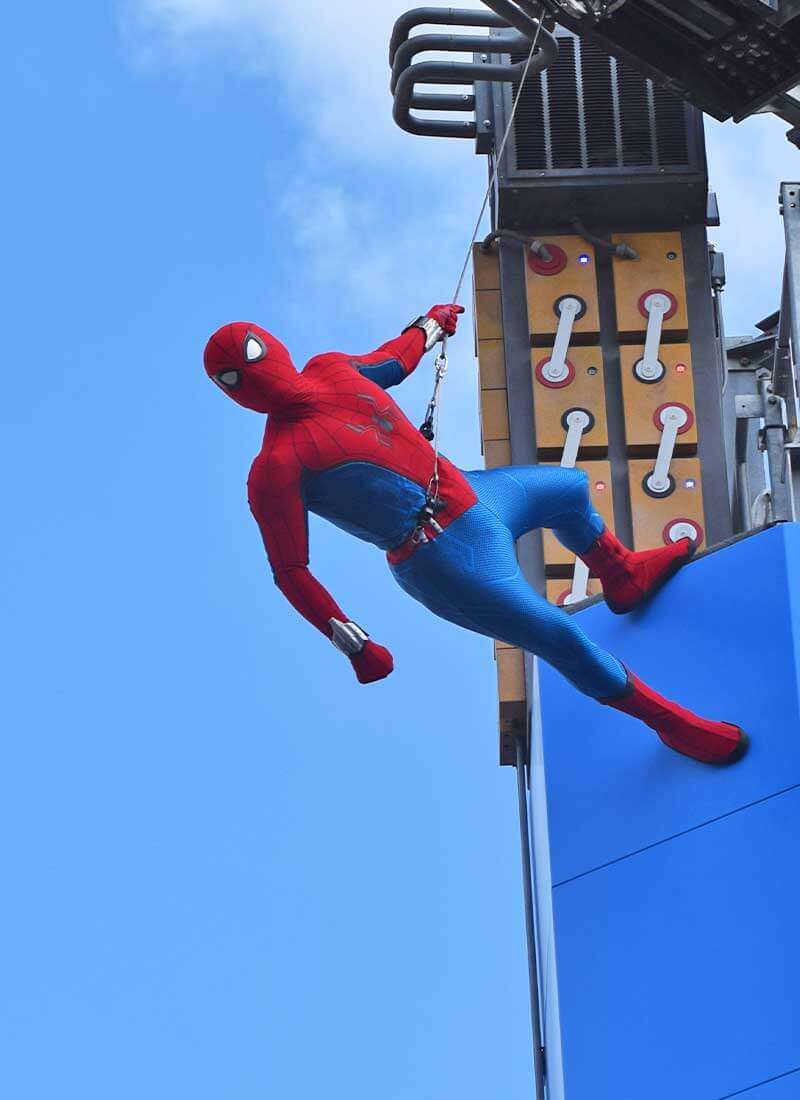 Showtimes are generally in the mid-morning until 4 p.m. This show can be found at the main entrance of Avengers Campus. Spider-Man starts out on the corner near the WEB SLINGERS entrance. Then he appears above the graffiti wall, does some tumbling, leaps from one rooftop to the other, swings around, climbs down the wall and greets his fans. At night, he greets his fans without the acrobatics.

In case you are worried about safety, Spider-Man’s leap from rooftop to rooftop is actually done by a stuntronic robot! It looks so incredibly real and lifelike! Sometimes his leaps are prettier than others as Peter Parker is still testing out his new Spidey suit. But all the rest of the stunts are performed by the amazing Spider-Man himself. 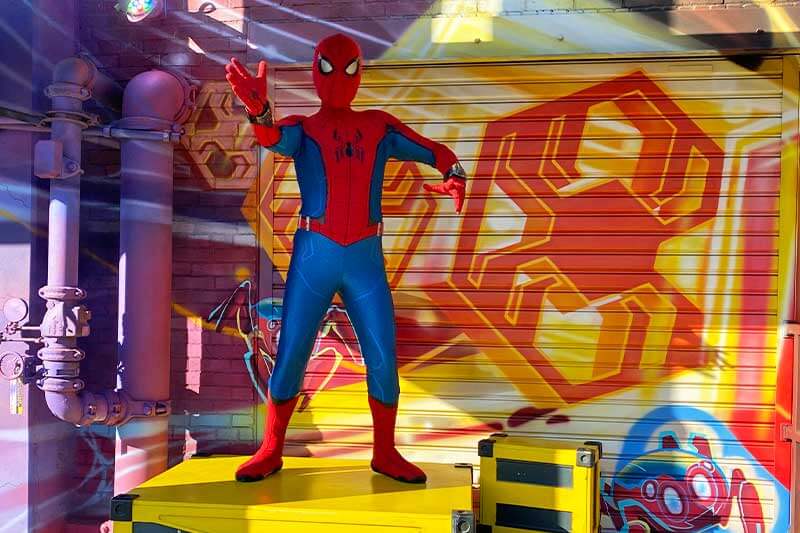 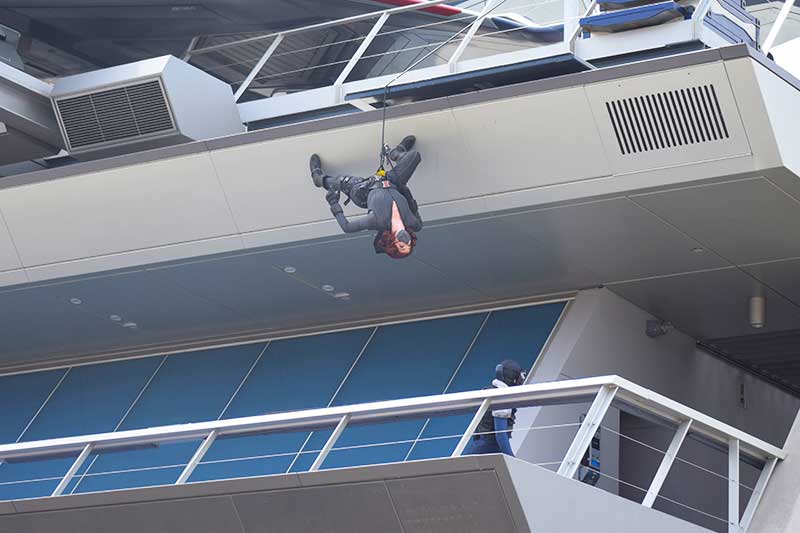 Showtimes for this stunt show are generally late morning to late afternoon. Look to the second story of the Avengers HQ building. You may want to stand farther back and closer to the Pym Test Kitchen to get a full view. It’s hard to see the action on the balcony if you are too close. Watch the Avengers spring into action to battle the Taskmaster and his gang. We have seen a variety of Avengers coming in to save the day, so you never know which characters will participate. During the holidays, the show is a holiday stunt show with a different storyline. It also has different characters, music and props.

Guardians of the Galaxy: Awesome Dance Off! 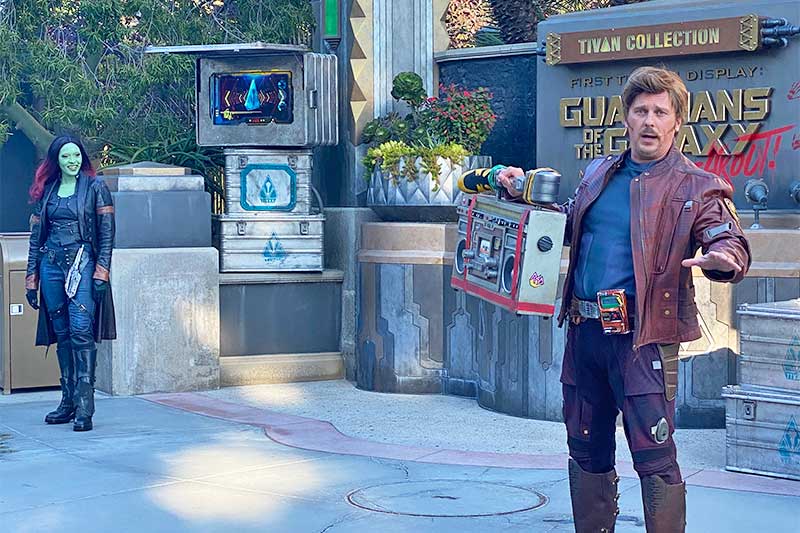 Find this show from afternoon until evening in front of Guardians of the Galaxy — Mission Breakout! Peter Quill, aka Star-Lord, and Gamora play tunes and get guests to participate. OK, Peter Quill is trying to get guests to dance. Gamora is really not on board yet. We are sure she will come around eventually. But these two are fun to watch, and you can feel free to dance all you like! 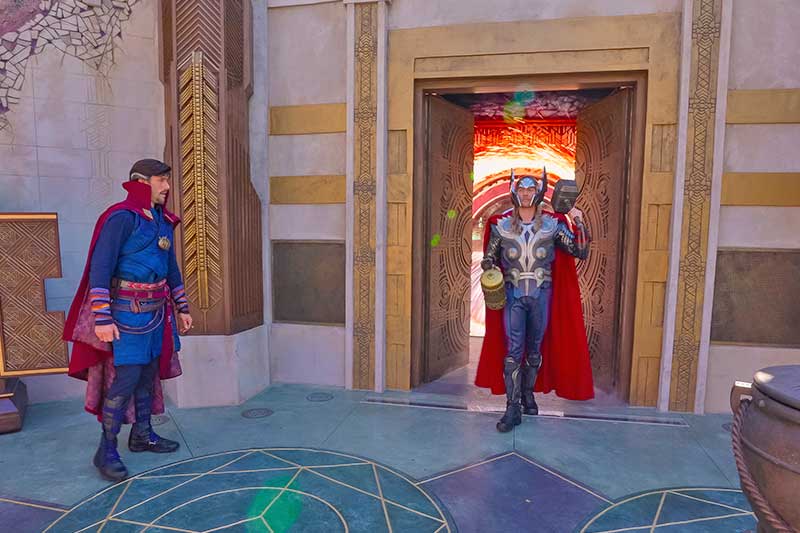 This afternoon show is usually from about 2:30 p.m. to 8:45 p.m. Doctor Strange will enlighten you to unexplained energies. Now, Tony Stark has brought Doctor Strange to teach recruits about the mystic arts and reveal the hidden Sanctum to the world! During the mystic arts show, you just might see Super Heroes and villains transported to Avengers Campus via a mystical portal. We saw Thor emerge! But others are known to pass through that portal. 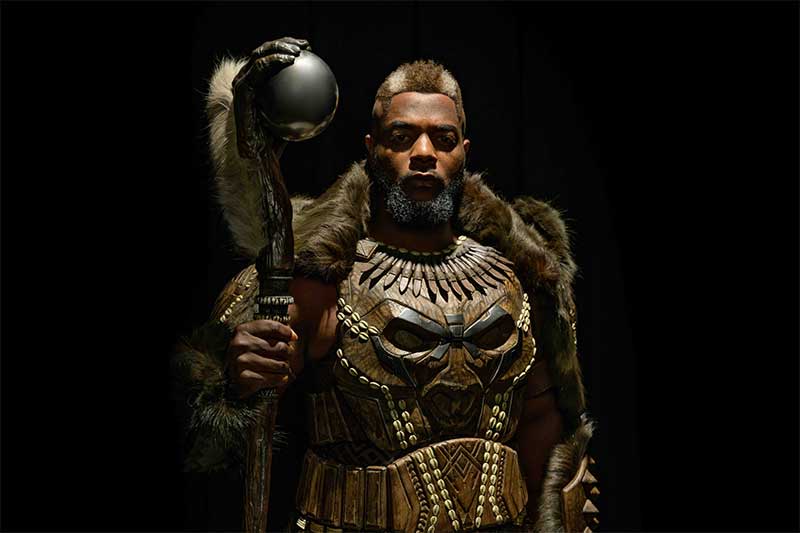 Witness the announcement of the next warrior to take on the role of Black Panther. M'Baku will lead an all-new experience. He's looking for recruits to join in "The Way of the Jabari." Learn about the culture of the Jabari Clan through chants and percussion in this new and limited show

Rides with Characters in Avengers Campus

There are two rides in Avengers Campus:

It should be pretty obvious from the names of the attractions which characters you’ll encounter on these rides. But if you are new to the Avengers, Peter Parker and Spider-Man appear in WEB SLINGERS, and you'll encounter Peter Quill, Gamora, Drax, Groot, Rocket Raccoon and Mantis (along with Tanaleer Tivan and many other creatures) in Guardians. Both ride queues are packed with Disney and Super Hero easter eggs from other movies and shows. 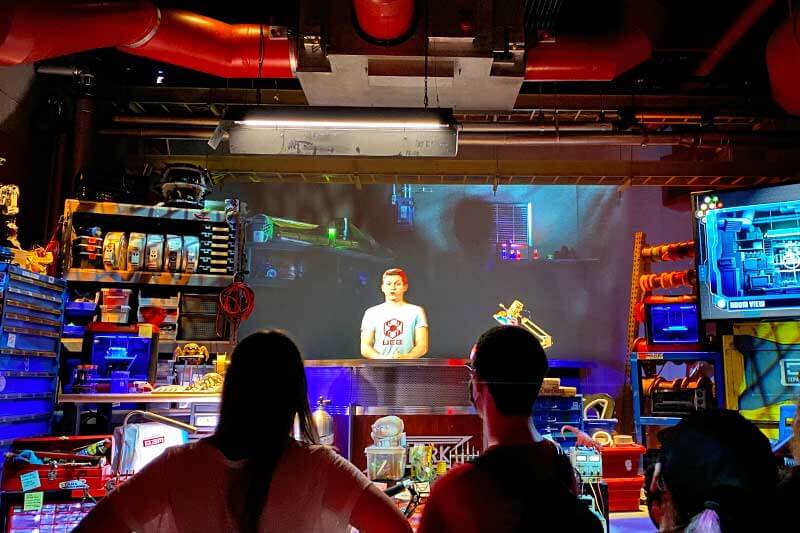 On WEB SLINGERS, you’ll attend a WEB (Worldwide Engineering Brigade) open house where Peter Parker will demonstrate Spider-Bots. But something goes wrong when the bots get stuck in replication mode and then get into "crazy alien juice stuff." Looks like a job for Spider-Man, but even he can’t solve this problem alone. He needs your help. You’ll put on 3D WEB Vision goggles and hop in a WEB SLINGER vehicle to help him capture the Spider-Bots gone amok in Avengers Campus by slinging webs with your own wrists. Can you work together as a team, capture the bots, move and pull things, and save the day? You’ll earn points for working as a team and for hitting Spider-Bots. This ride also counts as your arm workout for the day! As you exit the building, look at the spider in the vent and note the hidden Mickey behind it. 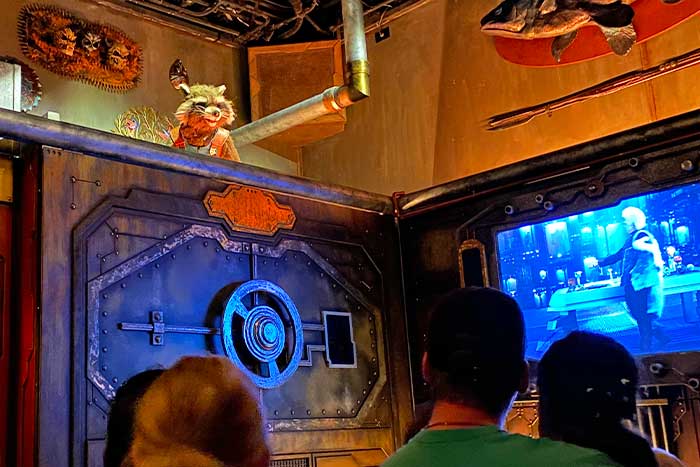 For Guardians, you’ll visit Tanaleer Tivan’s collection, but you’ll see that he has captured the Guardians of the Galaxy and has them imprisoned in clear cells for viewing. Once you step into his private office, an escaped Rocket Raccoon will explain how you can help him free his friends. It’s a wildly fun ride with a rockin’ soundtrack. You’ll get one of six songs with related video scenes. You'll want to keep coming back for more!

Related: Tips for Meeting Your Favorite Disneyland Characters (And Where to Find Them!)