Our Top Spots for Cheap Food at Disney World 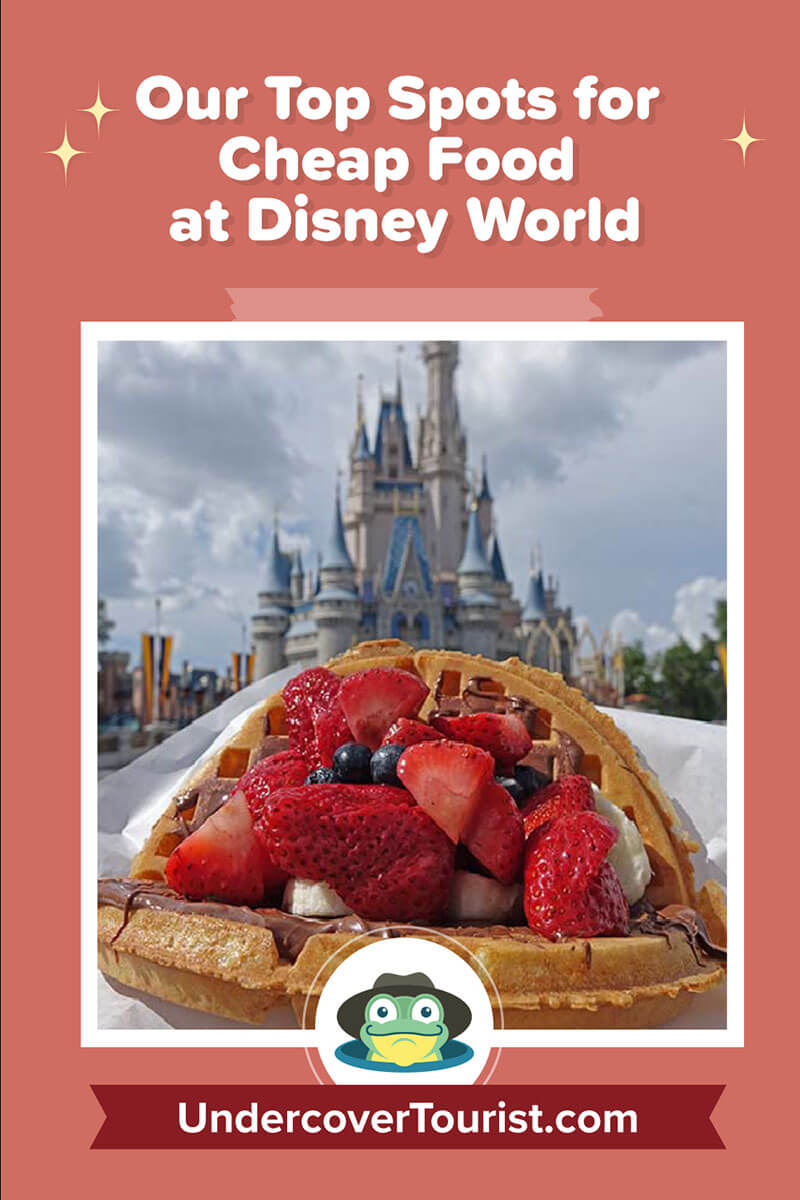 As a frog family of four, we understand how food costs at the Disney parks can quickly get out of hand. Fortunately, we’ve figured out many ways to eat on a budget, such as packing our own snacks and eating breakfast in our hotel room. But sometimes we don’t want to hassle with bringing our own food. After a lengthy quest to find all of the cheap food at Disney World, we’ve compiled a list with some of our froggy favorite, budget-friendly options. And by cheap, we mean $10 or less per person for a meal and $5 or less for a snack! We’ve broken it down into our top five spots at each park. Let’s dig in!

Note: all prices were accurate at the time of publishing and may be subject to change.

Our Top Picks for Cheap Food at Disney World 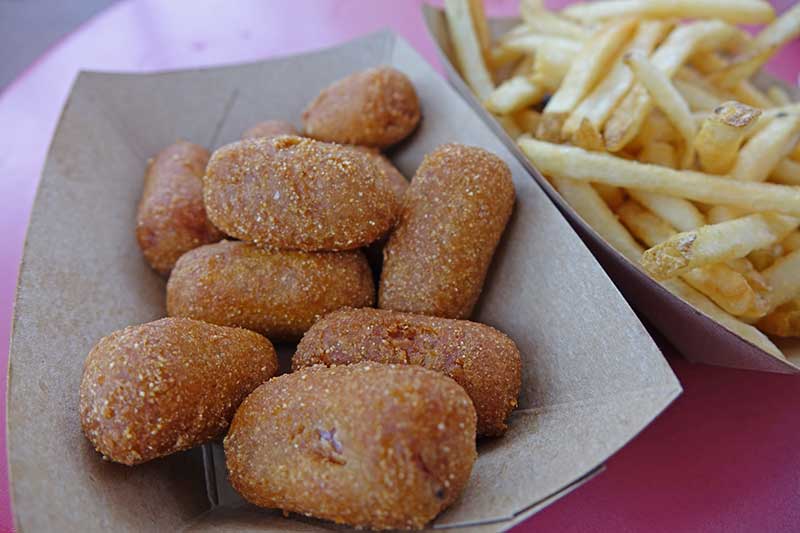 At Casey’s Corner, personalize an All-Beef Hot Dog with your favorite condiments at the toppings bar for $9.99. Vegans and vegetarians can even enjoy a Plant-Based Dog for $9.49. Not in the mood for a regular hot dog? Order a Corn Dog Nuggets meal for $8.99. All entrees are served with a side of apple slices or French fries. If you don’t mind spending an extra dollar or two, Casey’s Corner also offers specialty hot dogs, including a Hot Diggity Dog of the Month. Unfortunately, the restaurant no longer serves foot-long dogs, which helped cut down on costs even more by sharing, but the regular dogs still remain cheap eats!

We love sharing the Combo Platters at Columbia Harbour House! The Trio Platter, which consists of fried shrimp, breaded chicken breast nuggets and battered fish, can easily satisfy two people. Although it already comes with hushpuppies and a choice of vegetables or french fries, we usually order an extra side of veggies ($2.99) to share … no need for more fried food! A Trio Platter costs $13.99, while the other platters (any two out of the three: shrimp, chicken nuggets or fish) cost $12.49. If splitting one platter and an extra side of veggies between two frogs, it wouldn’t cost more than $8.50 each.

If you’re looking for some affordable Southwestern cuisine, stop by Pecos Bill Tall Tale Inn in Frontierland. Two entrees have a price tag just below $10: the Veggie Rice Bowl ($9.99) and the Veggie Nachos ($9.49). Tad and Lily comfortably split the Taco Trio ($10.99) and share a side of Tortilla Chips and Queso ($5.99), which equals $8.50 per tadpole. Perhaps what really increases the value at Pecos Bill is the Fixins’ Bar, where you can pile on additional toppings including salsa, cheese, roasted corn, onions, sour cream and more.

Frogs with a sweet tooth can satisfy their sugar craving with a unique Instagram-worthy snack that’s basically large enough to be a meal by itself. Sleepy Hollow has three different waffle sandwich offerings. The first option is a Fresh Fruit Waffle Sandwich, topped with chocolate-hazelnut spread and has a price tag of $8.29. You can only order the second one before noon because it’s a Breakfast Egg and Cheese Waffle Sandwich served with ham and tomatoes ($8.99). A Sweet and Spicy Chicken Waffle Sandwich rounds out the lineup. (Note: it is $10.49 but we’ll excuse the extra .50 cents because it comes with house-made chips.)

We can’t go on a Disney World vacation without getting a famous Dole Whip! This frog favorite treat is a pineapple-flavored, non-dairy soft serve dessert. At Aloha Isle, you have a choice between original pineapple, vanilla or swirl Dole Whip cup. The low cost ($4.99) helps this snack land on our list of cheap food at Disney World. Because Aloha Isle is a hoppin’ spot specifically for Dole Whip, we recommend mobile ordering in advance. 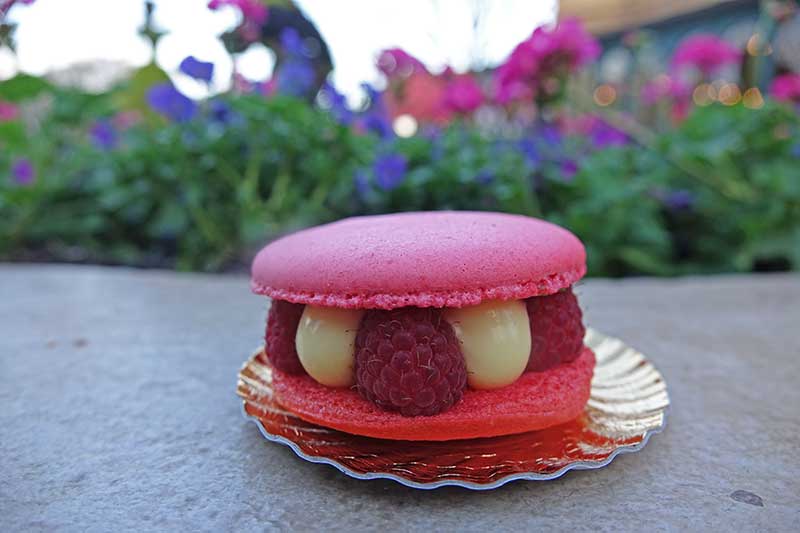 Tucked away in the back of the France pavilion, you’ll find this deli-bakery shop inside Les Halles. It’s a perfect stop if you’re looking for a cheap breakfast or lunch. The deli’s entrees, such as a BLT or Jambon Beurre (a classic Parisian ham and cheese sandwich), are all kept under $10. Many of the pastries and desserts, including creme brulee, eclairs and croissants, stay under $5. Bon appetit, froggies!

When you think of Germany, beer and sausages most likely come to mind. Well, you’re in luck! Sommerfest, a counter-service restaurant in the Germany pavilion, sells a frankfurter served on a roll with sauerkraut and house-made paprika chips for $9.99. (The Bratwurst meal is just 30 cents more, costing $10.29.) Sommerfest also sells affordable beer for under $10. Take your pick from Schöfferhofer Pink Grapefruit Hefeweizen, Beck's Pilsner or Warsteiner Dunkel ($9.25 each) — or sample multiple in a Beer Flight for $9.

This Norwegian bakery and cafe is another great place to find unique, budget-friendly food items. The entire menu features entrees, drinks and treats with price tags of $10.50 or less. Unlike other restaurants in World Showcase, Kringla Bakeri Og Kafe and Les Halles Boulangerie-Patisserie (see above) open at 9 a.m. instead of 11 a.m. ... perfect timing for a cheap breakfast! You have to try traditional Norwegian lefse ($2.99), a soft flatbread rolled with cinnamon, sugar and butter.

If you’re looking for a cheap snack, Kabuki Cafe has both sushi and Kakigōri to satisfy a midday hunger pang and your wallet. Sushi options, such as a California Roll, a Futomaki Big Roll and Temari Sushi, are served as snack-sized portions for $5 at this outdoor kiosk in Japan. Kakigōri, a shaved ice treat, is available in six different flavors with or without a sweet milk topping for $4-5.

It’s worth mentioning Via Napoli in Italy solely for its pizza. If you want a more leisurely meal experience at a table-service restaurant, this option works well mainly for small families or groups. The individual pizzas are expensive ($18-22), but if everyone agrees on toppings, split either a large (serves 2-3) or a Mezzo Metro (serves 3-5) pizza. The Mezzo Metro pizzas especially are HUGE. In fact, they’re half a meter long! When we, a family of four, share a Mezzo Metro pizza, it’s about $10-12 per person depending on which kind we get (prices range from $39-48). We don’t mind splurging an extra couple of dollars per frog (plus our tip) for the overall dining experience! Because Lily doesn’t usually finish her entire portion, we end up with leftovers … but sometimes Tad will help his sister out. 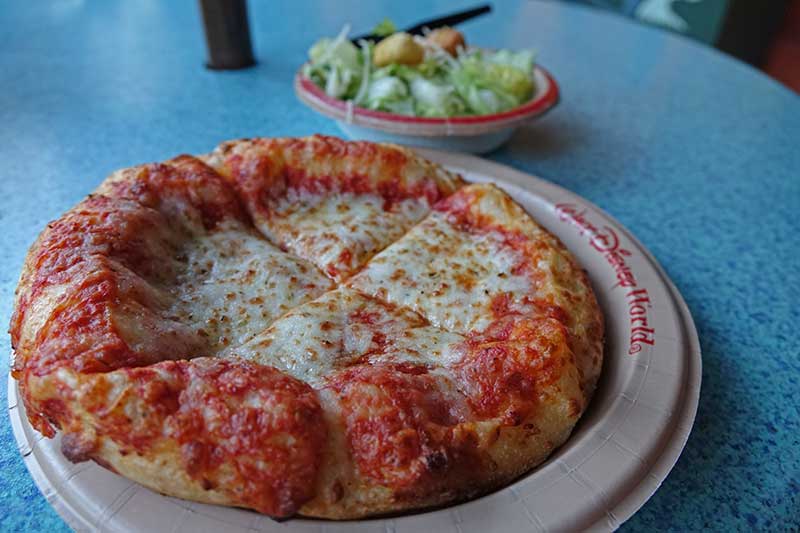 At Pizzafari, you can get a personal cheese pizza served with a small Caesar salad for $9.99. For the same price, there are also gluten and dairy allergy-friendly options available. If you need a little more variety, vegetable, pepperoni and sausage and pepperoni pizzas only cost up to an extra dollar. Other low-cost menu items include a side of tomato basil soup for $3.69 and a cannoli cake for $4.99.

Once again, we’re highlighting a counter-service restaurant that has entrees large enough to split between at least two people. All entrees have a price range of $10.99-$18.99, so at most, you’d spend about $9.50 per person. Choose between smoked chicken, ribs or pulled pork platters — or opt for the Ribs, Chicken and Pulled Pork Sampler to try a bit of everything. Entrees come with baked beans and coleslaw.

Eight Spoon Cafe is a small, outdoor food kiosk across from Adventurers Outpost — it’s easy to walk right past it. This hidden gem serves snack-sized baked macaroni and cheese bowls. A simple, plain mac and cheese bowl will only set you back $4.49! If you want to add pulled pork or shrimp and sweet chili sauce, the price increases by a couple dollars.

If you’re in need of a cheap breakfast, Kusafiri Coffee Shop & Bakery has a variety of value items. Start your day with a Hot Breakfast Wrap (egg, sausage, spinach and goat cheese) for $6.79, or go a simpler route with cereal, assorted muffins and danishes or a pistachio honey croissant for under $5. If you’re hungrier later in the day, opt for the Tomato and Mozzarella Sandwich served with house-made curry spiced chips ($9.99).

Restaurantosaurus has classic American fare, such as burgers and chicken nuggets. Some entrees are a little pricier than $10, but we like to point out the Burger and Fries Combo ($14.99). Lighter eaters could share this half-pound burger that’s topped with cheddar cheese, pulled pork, barbeque sauce and jalapeno poppers. The cheapest entree is the 8-piece chicken breast nuggets meal served with fries, which costs $9.99. 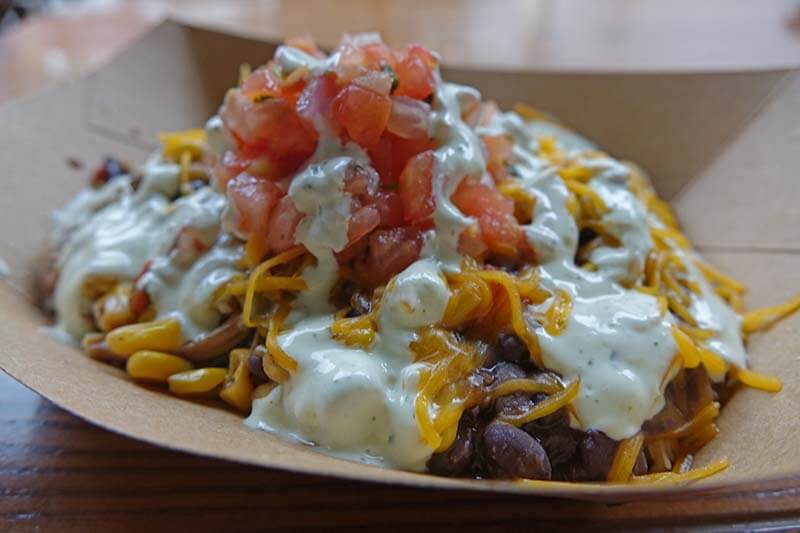 Most of the entrees at Fairfax Fare average around $11-12 (rather than sticking to $10 or under), but we think it’s worth bending that rule a bit and mentioning its 7-layer rice bowls, which are $11.29. You can choose from pulled pork, grilled chicken or vegan chili as the main protein layer. The other six layers include cilantro rice, black beans, fire-roasted corn, pico de gallo, sour cream and cheddar cheese.

Dine among your favorite toys at Woody’s Lunch Box, one of our newer favorite spots for cheap food at Disney World. For breakfast, take your pick from a Breakfast Bowl ($8.49), S’more French Toast Sandwich ($7.99), a Smoked Turkey Breakfast Sandwich ($7.49) or a Banana Split Yogurt Parfait ($5.99). Later in the day, feast on a Grilled Three-Cheese Sandwich ($8.99) or “Totchos” ($8.99), potato barrels — or tater tots — piled with chili, shredded cheese and signature queso, tomatoes, corn chips, sour cream and green onions.

The Backlot Express has a few inexpensive, filling options for lunch and dinner. Chicken strips (four pieces) and a Caprese Sandwich with marinated mozzarella, tomatoes, pesto and arugula both come with a side of fries for $9.99. If you’re a fan of salads, the Southwest Salad ($8.99) consists of crisp wontons, black bean relish, avocado and vinaigrette dressing. There’s an option to add grilled chicken for an extra $2. It has one of the few self-serve soda stations located in Disney World, so if you purchase a drink, you can get unlimited free refills during your meal.

The boat sitting dockside at Echo Lake has two foot-long hot dog offerings: a Carolina dog topped with pulled pork and coleslaw or a Chili-Cheese dog. Both come with chips and are priced at $12.99. It’s easy to share the foot-long dog, so it cuts the cost down to $6.49 per frog. Another shareable option is the Loaded Chili-Cheese Nachos for $10.99. For dessert, frogs with a sweet tooth would enjoy the ooey-gooey s’mores brownie ($4.79), a double-chocolate brownie topped with toasted graham cracker crumbs and marshmallows.

We’ve recommended several meals to split, and the same thinking can apply to find cheap snacks and desserts! The specialty funnel cakes at Epic Eats are enormous … even Tad can’t finish one by himself. We love splitting the Funnel Cake with Cookies ‘n Cream and Soft-Serve Vanilla Ice Cream ($8.49 total — $4.25 or less per person, if sharing). If you don’t want Cookies ‘n Cream, there is a strawberry version with ice cream or a plain funnel cake with powdered sugar for only $6.79. You can also get a soft-serve waffle cone for $4.99.

If you're sticking to a budget, be sure to visit these restaurants and food kiosks to keep dining costs low. Do you have any other favorite places to find cheap food at Disney World? Share in the comments below!

Related: 15 Easy ~Hopful~ Tips for Eating at Disney World on a Budget