Which Disney World Moderate Resort Hotel Is Right for You? 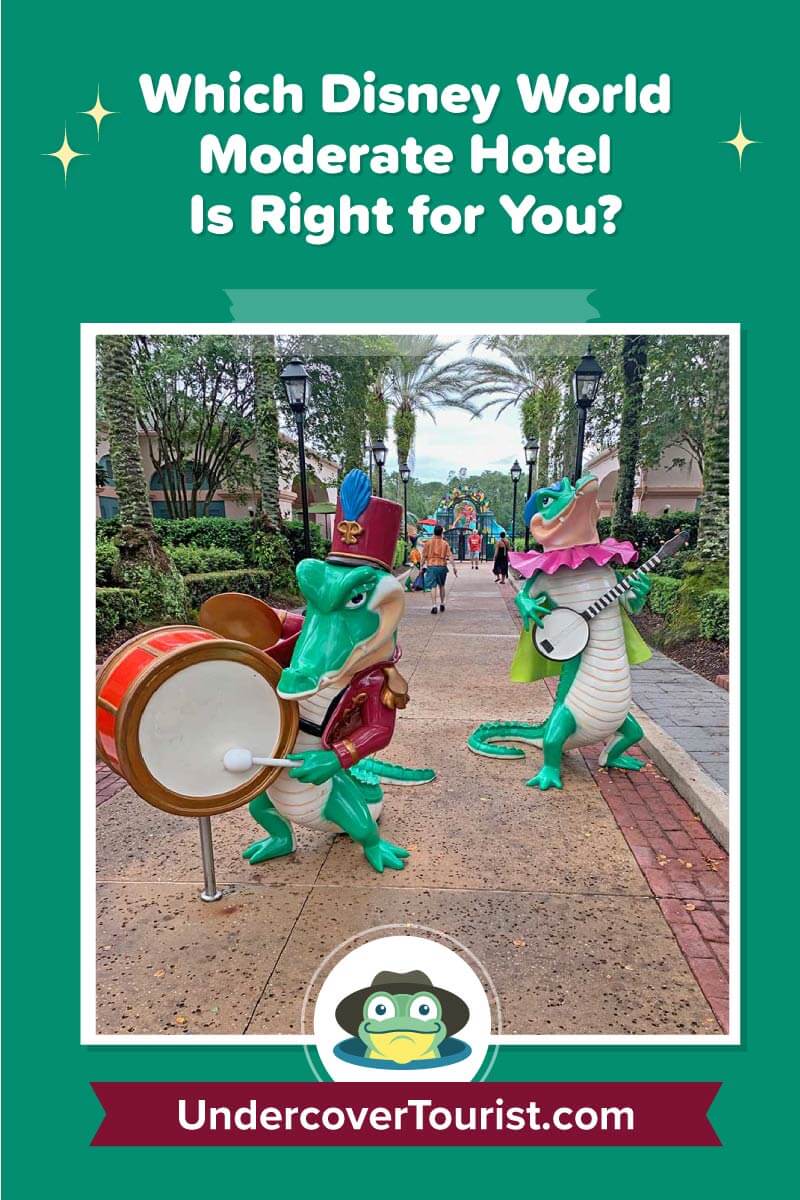 As we've talked about a time or two, all of the Walt Disney World Resort hotels offer a little something for everyone. While the Disney moderate resorts offer most of the same benefits and amenities, each one has its own unique theme, transporting your frog squad to South America, the Big Easy and more. Whether you’re looking for a frogtastic pool for the tadpoles or a room that’s big enough to fit your entire frog family, we’re here to break down these family-friendly resorts and lay out your options. The Disney moderate resort hotels offer a good blend of amenities and affordability that makes sense for many families. And these hotels have as many (or more) rooms per hotel than the value resorts (minus Disney's Port Orleans Resort - French Quarter), so they often have more availability.

If you're looking at the moderate hotels on our handy-dandy Disney World hotel decision matrix, you may have noticed that we have three Frog Family Favorites. After all, we frogs love each one for different reasons! But which one is right for your family? And what's the overall best Disney moderate resort? We'll tackle each of these questions!

We're taking a closer look at each of the moderates so that you can make the very best decision for your family. We'll be looking at a few key areas: overall theming, rooms, dining and amenities, the pool and transportation and distance to the parks. 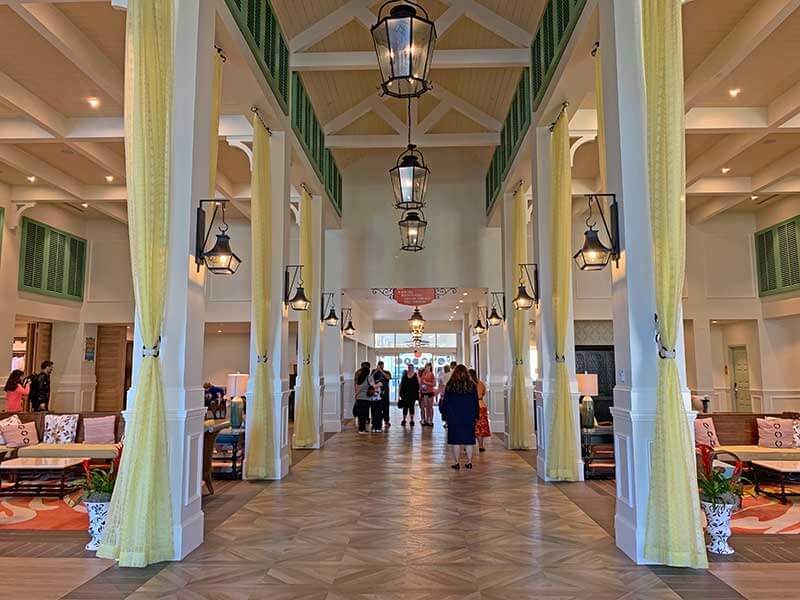 The theming is quite different for each of the Disney moderate resort hotels; however, there is some overlap between Disney's Caribbean Beach and Disney's Coronado Springs.

The theming at Disney's Coronado Springs is easily the most diverse. The resort rooms are divided into three main standard room sections — Casitas, Ranchos and Cabanas — each with its own flavor of external architecture. All of the room interiors are exactly alike. Inspired by Spanish art by Salvador Dali, the new Gran Destino Tower added 545 rooms with additional square footage (including 50 suites), a club-level lounge and rooftop dining.

Disney's Caribbean Beach is divided into five island-themed "villages" — Aruba, Martinique, Barbados, Trinidad and Jamaica — that form a tropical paradise around a lake, complete with their own sandy beaches and private pools. 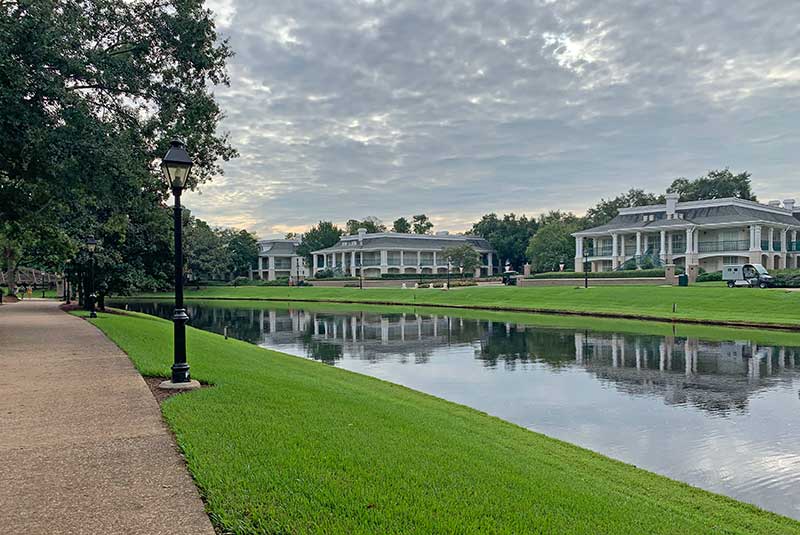 Our Pick: Disney's Port Orleans. When it comes to children, it's hard to go wrong with the beach theme, which makes Caribbean Beach a popular choice. But the picturesque waterways, working water mill, magnolias and poplars make Port Orleans - Riverside a resort unlike any other. You can follow the Sassagoula River by foot or boat down to Port Orleans - French Quarter. You'll feel as though you're in the middle of The Big Easy because of the cobblestone streets and wrought-iron balconies. To top it all off, it's the only place you can find Mickey beignets at Disney World! 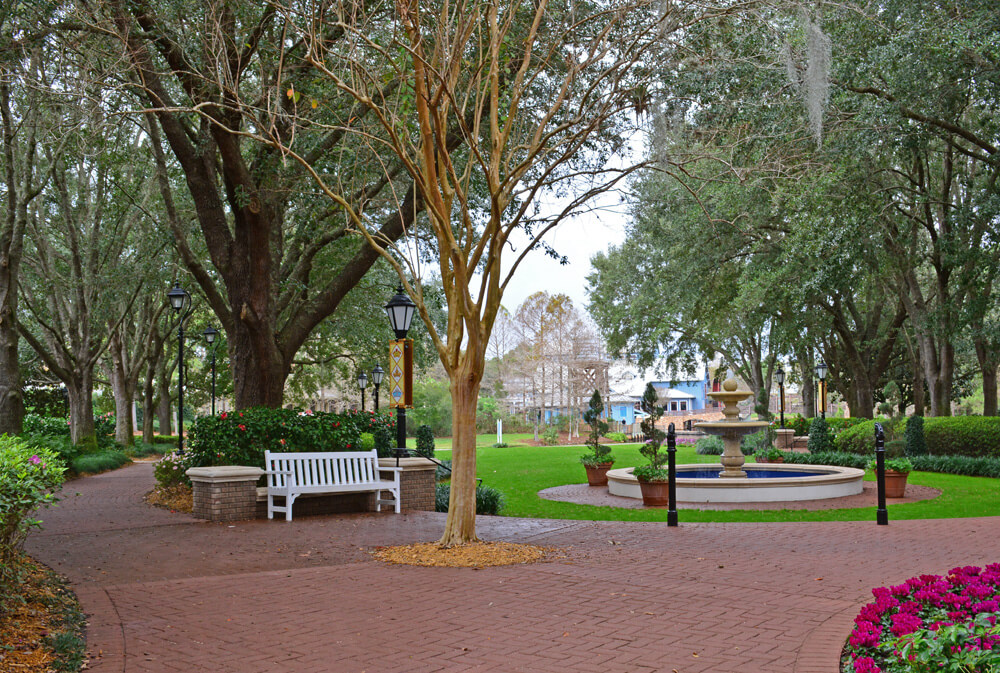 All of the Disney moderate hotels offer queen beds in their standard rooms. At Disney's Caribbean Beach, the tropical theming is carried inside the rooms, which feature dark, carved headboards. Disney's Coronado Springs has more of an Aztec theme, with blues and browns as the dominant colors. Disney's Port Orleans - French Quarter features both Southern plantation-style theming and bayou-theming inside its rooms. Look for some hidden "Princess and the Frog" gems in the bathroom at French Quarter! 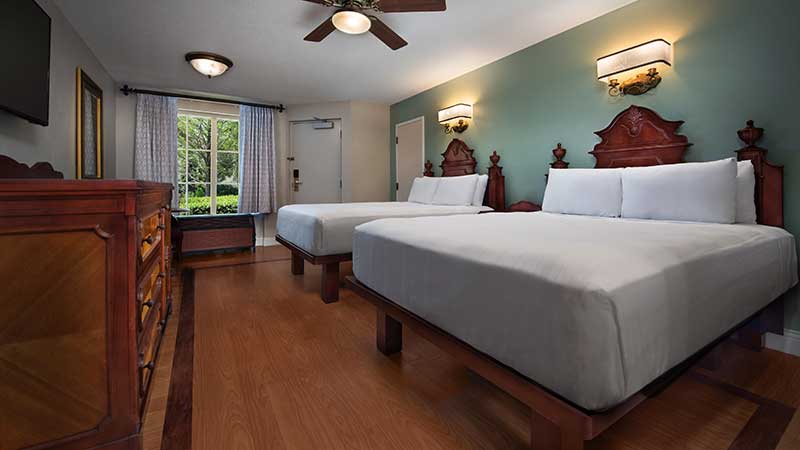 Disney's Caribbean Beach and Disney's Port Orleans - Riverside offer more elaborately themed rooms — pirate rooms and royal rooms, respectively. The intricately carved pirate ship beds will only accommodate doubles, so these rooms sleep up to four adults. The royal rooms, featuring Tiana and her princess pals, are fit for your own princess and offer light-up headboards and dark, royal colors. 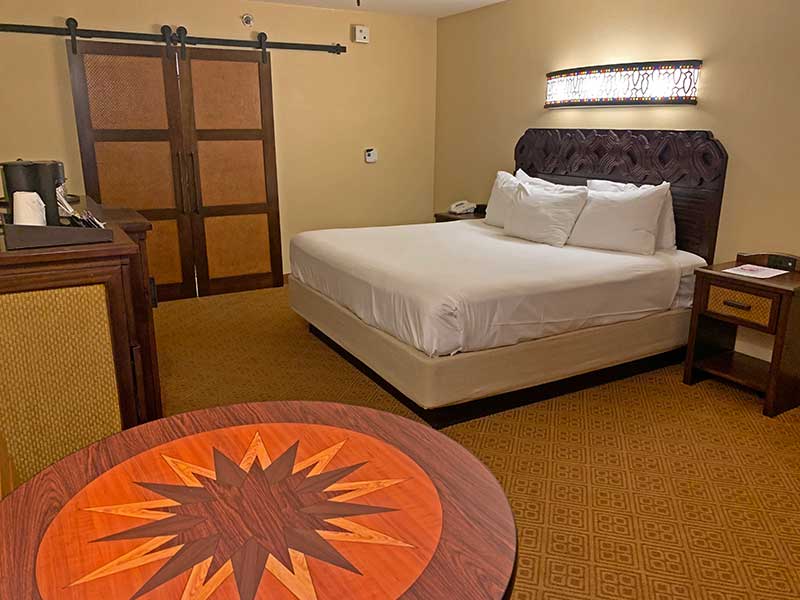 Our Pick: Disney's Port Orleans - Riverside and Disney's Caribbean Beach Resort. We know — a tie?! But with the ability to sleep five and recent renovations leaving things fresh and clean, both resorts get our nod for the best rooms. 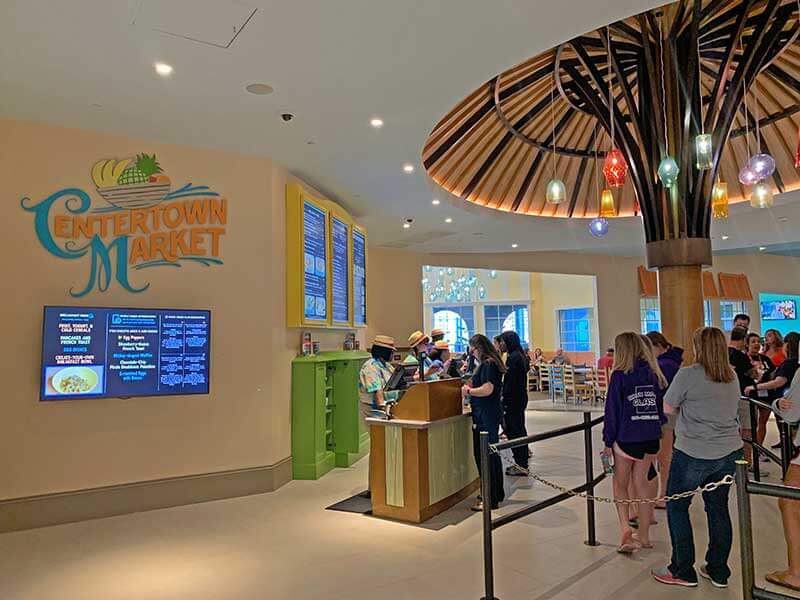 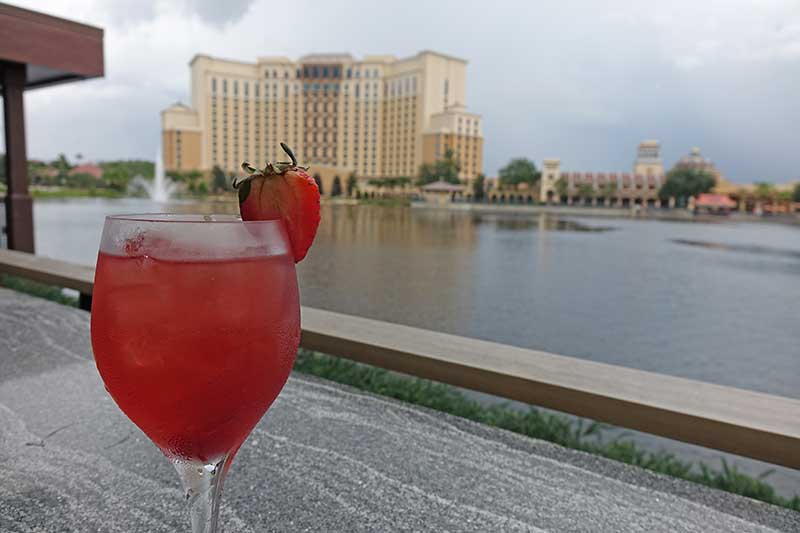 Our Pick: Disney's Coronado Springs Resort. Because Coronado Springs also has a convention center, it offers additional amenities that the other moderates do not. They include two table-service restaurants, additional bars, a salon, spa and fitness center and suites. Additionally, Gran Destino Tower offers a rooftop restaurant, Toledo - Tapas, Steak & Seafood, and a coffee lounge that turns into a bar at night. Not only does the new Villa del Lago serve up even more dining options, but also provides a shortcut through the middle of the lake. 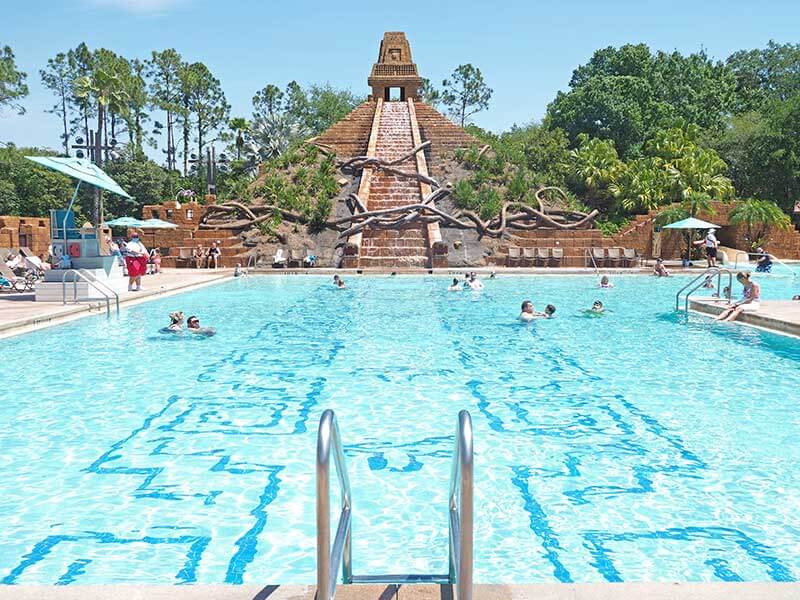 The moderates have more elaborately themed pools that include waterslides and hot tubs (while the values do not). Because of the pool's importance — it's often a primary reason why we choose one hotel over another — we're breaking this out into its own category outside of amenities.

Each of the moderates offers a feature pool and at least one hot tub. The larger resorts also have non-themed "quiet" pools closer to the rooms (Port Orleans - French Quarter is the exception since it's a smaller resort overall). The pool at Port Orleans - Riverside — set on Ol' Man Island — has the feel of a swimmin' hole and includes a sawmill slide. 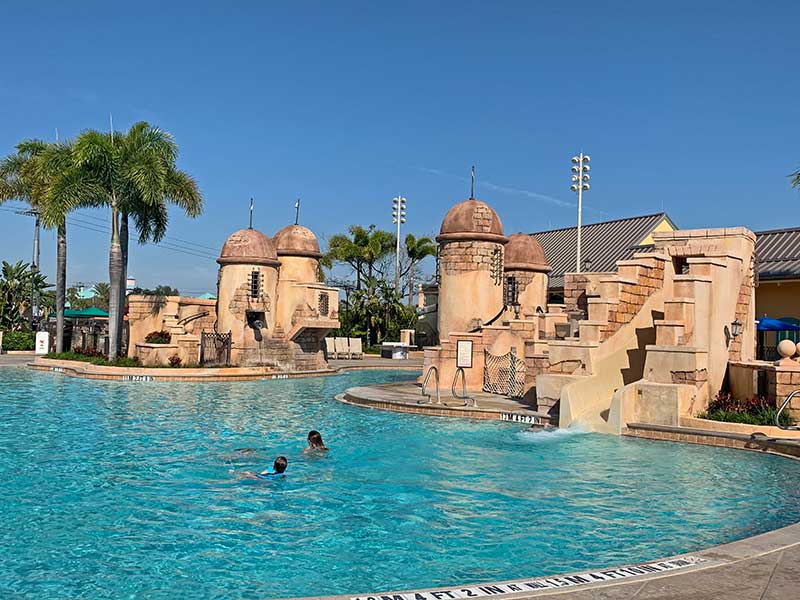 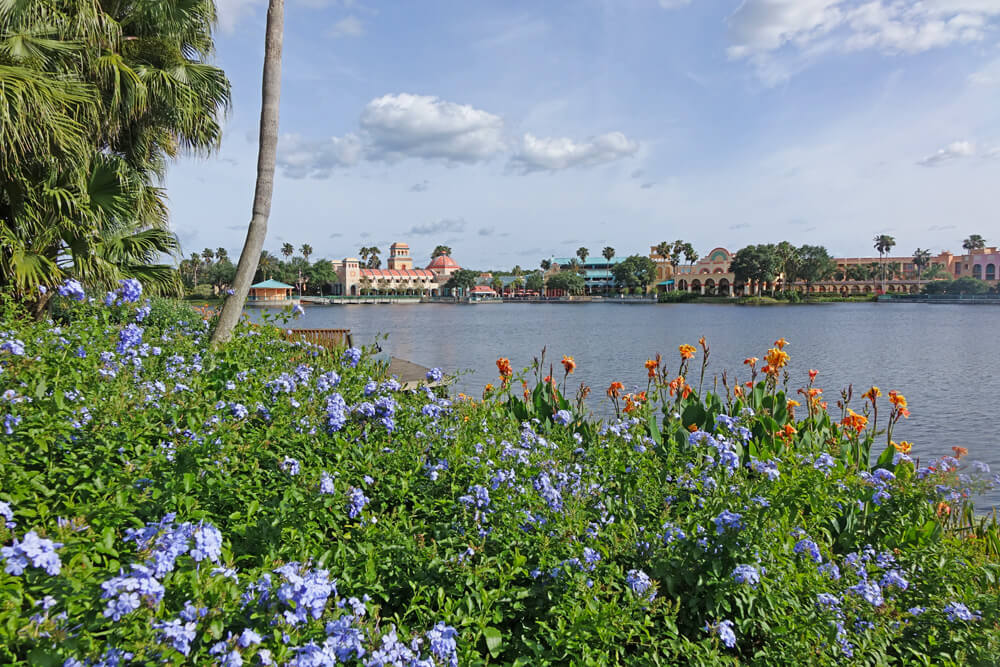 With the exception of Port Orleans - French Quarter, which is the smallest resort on property, the Disney moderate hotels are among the largest on property in terms of sheer acreage and number of rooms. This is an important consideration and makes room location a bigger deal. After a long day in the parks, do you potentially want to have to walk another 10 minutes to get to the main pool or to grab a bite to eat? In most cases, you will pay a premium for the rooms closest to the lobby, dining and feature pools.

Like the values, the moderates all offer bus transportation to the theme parks. They are all about the same distance to Magic Kingdom. Disney's Caribbean Beach is closest to EPCOT, and Disney's Coronado Springs is closest to Disney's Animal Kingdom and Disney's Hollywood Studios. All of them, except for Port Orleans - French Quarter, have multiple bus stops around the resort itself. French Quarter does, at times, share bus service with Riverside. However, the opening of Disney Skyliner, which has direct access to EPCOT and Hollywood Studios, is a game-changer for Caribbean Beach Resort. 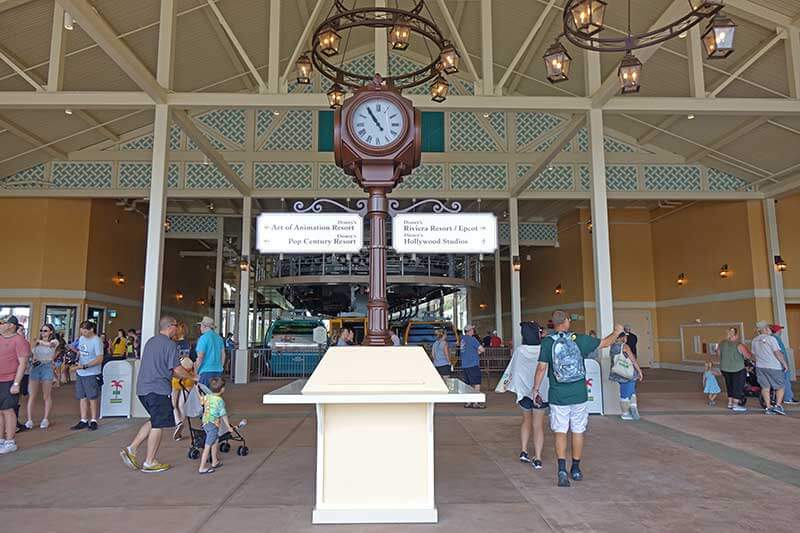 Additionally, both of the Port Orleans resorts offer boat transportation to Disney Springs, which is a nice option for families who want to do more shopping and dining (nothing gets Leap excited like a boat ride)!

Our Pick: Disney's Caribbean Beach Resort. Disney's Caribbean Beach Resort has direct access to EPCOT and Disney's Hollywood Studios thanks to the new Disney Skyliner gondola system. Because the station also acts as the main Skyliner hub, you could even use it to pop over to Disney's Riviera Resort or Disney's Pop Century and Art of Animation Resorts if you want a change of scenery or to take advantage of dining options at those hotels. 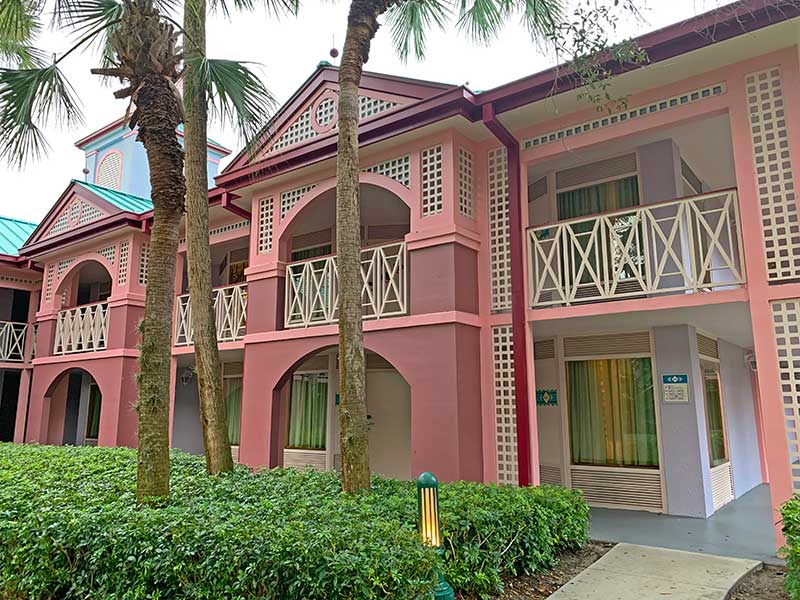 Drumroll, please ... It's very close, but because of the latest refurbishments and its access to Disney Skyliner, Disney's Caribbean Beach is our overall favorite. It's centrally located, so it's a short distance away from all the theme parks and Disney Springs. Which is your family's favorite Disney moderate resort hotel?

Have you booked a room at any of Disney's moderate resorts? For more tips to help you decide, check out the Where to Stay in Orlando page inside our Orlando Planning Timeline! Don't froget to book your favorite Disney moderate hotel now!