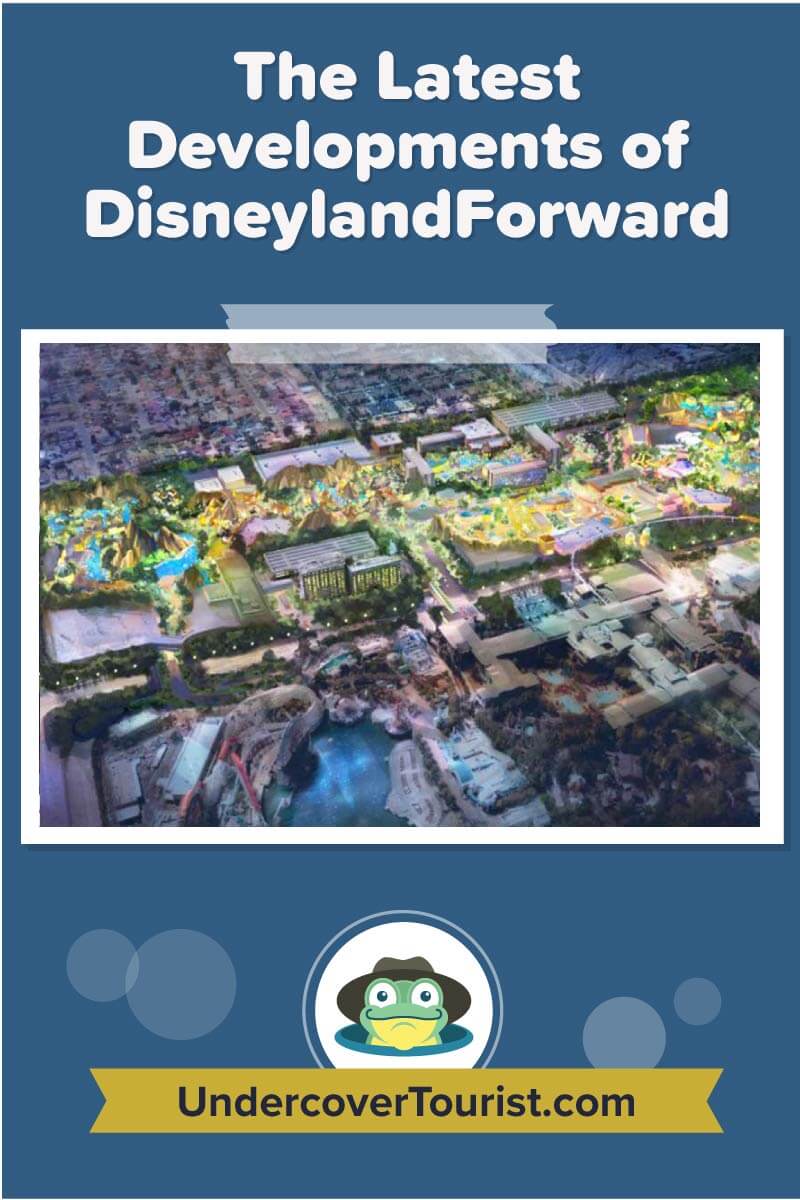 There’s a great big beautiful tomorrow at Disneyland. At least, that’s the plan! Disney has proposed a future plan to expand both Disneyland theme parks, hotel offerings, entertainment, parking, restaurants and more. The project is called DisneylandForward. It’s in the very beginning planning and approval stages and could take decades to develop. The ideas unveiled in this initial plan reimagine underutilized areas of the property and would reshape the Disneyland Resort for decades to come. It’s toadally exciting to imagine the possibilities! Don't get too frogcited yet, though, as these plans require approvals from the city of Anaheim before Disney can proceed.

The team behind Disneyland Resort shared the major "multiyear public planning effort" of DisneylandForward with the public on Thursday, March 25, 2021.

According to Disneyland Resort President Ken Potrock: "Thinking big and leading the way is both our legacy and our best path forward. Now is the time to be bold, to dream, to believe and to lead! The world-renowned Disneyland Resort is poised to bring back jobs to our community as well as new entertainment and experiences to loyal fans and new audiences for generations to come."

How Will DisneylandForward Affect Disneyland Resort? 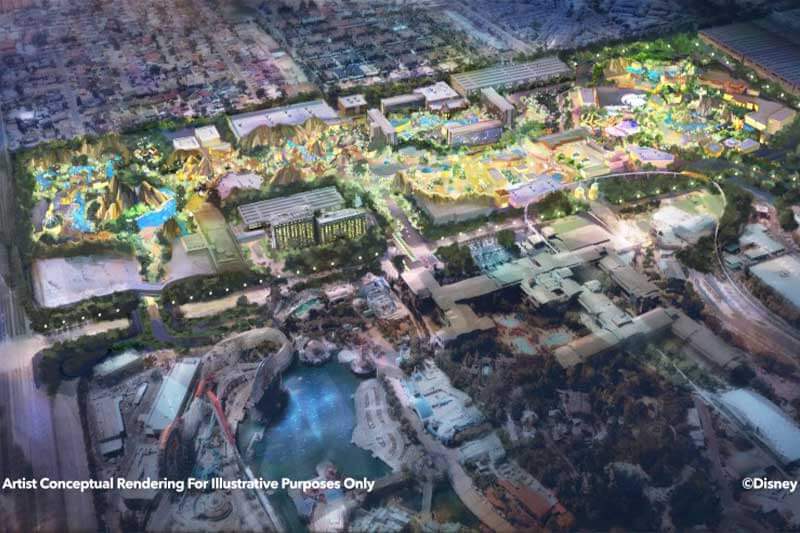 Walt Disney said that Disneyland will never be completed. It will continue to grow as long as there is imagination left in the world. Well, the Disneyland Imagineers and executives are dreaming big with this new plan while still keeping Walt's original park we know and love preserved for future generations to enjoy.

If DisneylandForward moves, well, forward, Disney can bring new lands and stories that are popular at other Disney parks worldwide to life at Disneyland without having to replace other beloved attractions. When Disneyland was built in 1955, nobody could have predicted the impact Disneyland has had on the once-rural community on which it was built. Now surrounded by the city of Anaheim, which grew up around it, Disneyland has very defined boundaries of its 4,800 acres, leaving no room to expand beyond its footprint. (By comparison, Disney Worlds sits on approximately 30,000 acres.) Planning restrictions for parts of the property limit what the land can be used for, but Disney wants to make changes in order to utilize those spaces for new attractions, lands, shopping and dining. And that brings us to this planning process.

This is not the first time Disneyland has turned its parking lots into other magical spaces (such as the original Disneyland parking lot making way for Disney California Adventure Park and Disney’s Grand Californian Hotel and Spa). In the 1990s, Disney led an expansion to Disneyland resort and improvement to transportation around the resort as well as creating the Anaheim resort area that surrounds the property. This led to the addition of the second theme park, two hotels, the Downtown Disney shopping district and a new parking structure (and more recently, a second parking structure).

Disney holds land that currently functions as employee and guest parking lots. The company is beginning discussions with the city of Anaheim about gaining some flexibility to expand the use of the land for more than the 1990s planning restrictions allow. For example, land that is currently zoned for a parking lot or hotel could allow for theme park experiences, retail and dining, as well. The planning and approval process with the city of Anaheim could take up to two years. Disney does not plan to add more square footage or hotel rooms than have already been approved by the city. Instead, Disney is asking to update the existing approvals to allow for integrated development to be located and built on Disney properties.

DisneylandForward looks to the land of tomorrow to support future development for years to come. Disney will invest in transportation, parking, transit and pedestrian safety as part of this plan. Disney is not asking for any public funds to complete these projects.

What Are the Affected Areas? 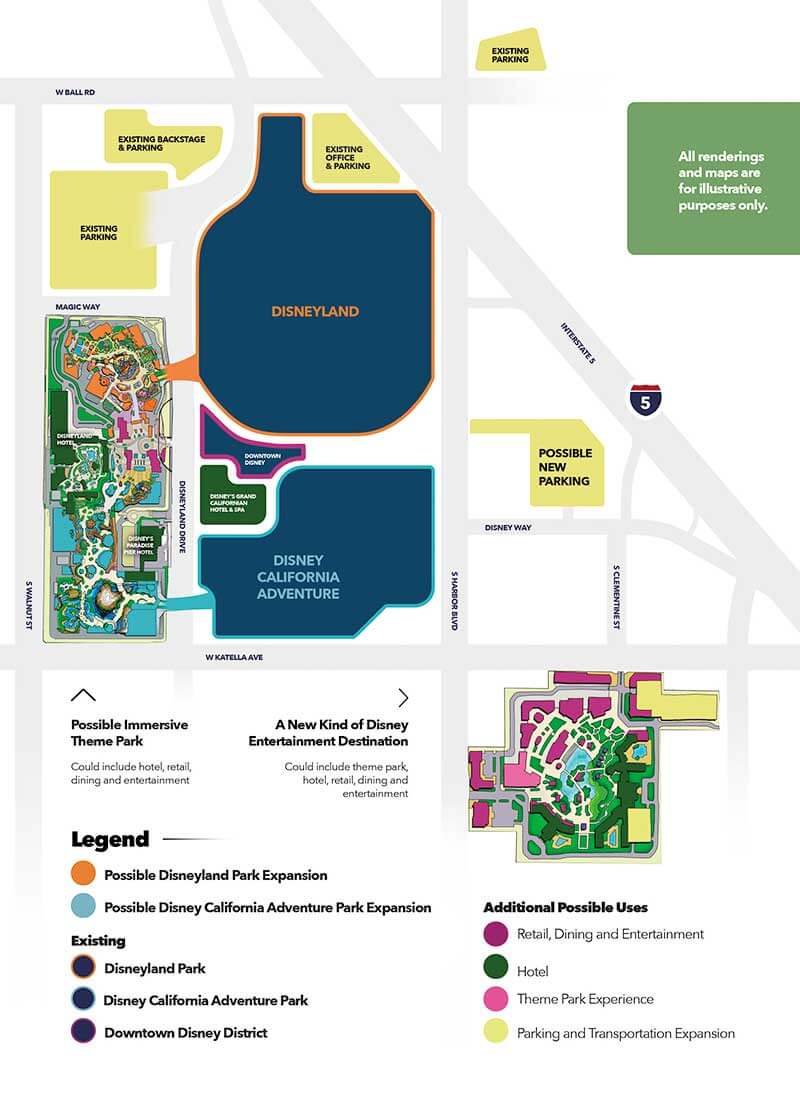 There are three major areas that Disney is looking to improve upon.

West Side Expansion of the Resort

This Immersive Theme Park west side changes are the most frogciting to us. The plans could include a possible theme park expansion for both parks into the land that currently surrounds the Disneyland Hotel, parts of Downtown Disney (where the unused ESPN Zone and AMC theater are currently located), Disney's Paradise Pier Hotel and some surrounding parking lots. The hotels will remain and be surrounded by the theme park areas. The streets that surround this area include Katella Avenue, Walnut Street, Disneyland Drive and Magic Way. The additions could also include hotel, retail, dining and entertainment.

There is no third theme park planned. Under the current concept art, we see that the two theme parks, Disneyland Park and Disney California Adventure Park, would remain separate but each expand across Disneyland Drive into land that is on either side of the Disneyland hotel. That land is currently primarily used as parking lots.

New lands and experiences could be inspired by popular Tokyo Disney Sea and Shanghai Disneyland, as well as rides and lands at Disney World. For example, guests could visit Arendelle in a Frozen land with a thrilling boat adventure and restaurant set inside the castle. Or they could have the "best day ever" with Rapunzel and Flynn Rider from Tangled. Vistors could ride a gondola to see the lantern festival. I don't know about you, but "I have a dream" of dining in the Snuggly Duckling, where Rapunzel encountered a band of thieves.

Off we go! We could sail off to Neverland, "second star to the right and straight on 'til morning!" We could board a boat ride to follow the Lost Boys down a river or take a journey to the middle of Pixie Hollow where Tinker Bell and her fairy friends dwell. Other lands and attractions could weave in Zootopia, Toy Story Land and Tron. Oh boy! 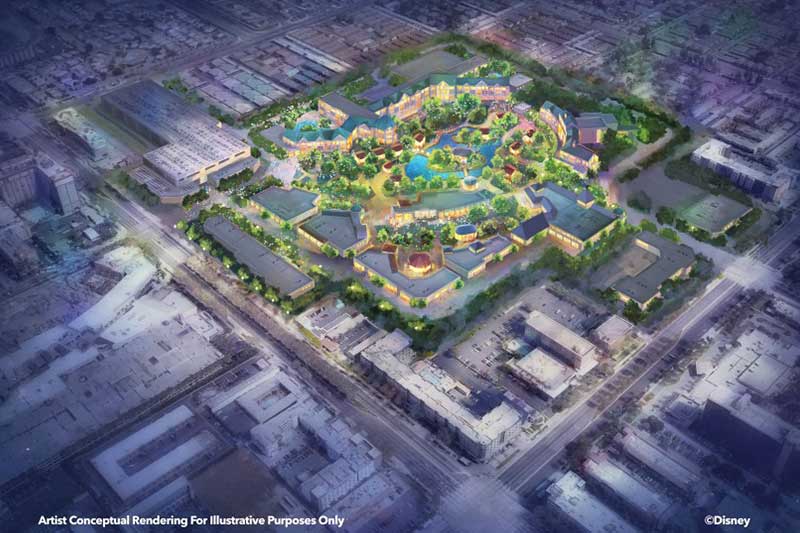 A new Disney Entertainment Destination could take over the Current Toy Story parking lot from Harbor Boulevard to Haster Street to parts of Katella at Clementine. The additional possible uses include a hotel, theme park experience, a parking and transportation expansion and more retail, dining and entertainment. How does a theme park experience that is not physically connected to either theme park work? We are hopping curious to find out!

Expanded Parking at the Current Pumbaa Lot off Disney Way

Keep in mind that DisneylandForward is only at the beginning stages of development. If these plans are approved, it will take years to build. But before we know it, we could adventure into a whole new world of Disneyland experiences that will meet the needs and interests of theme park visitors for years to come.

We are sure you have a ton of questions about DisneylandForward. So do we! But we will do our best to answer them in the comments sections below. These plans are fluid and dependent upon city approvals and other factors. Keep hopping back for updates, as we will continue to update this post as new and confirmed details come in.

SAVE $18 vs Adult gate price