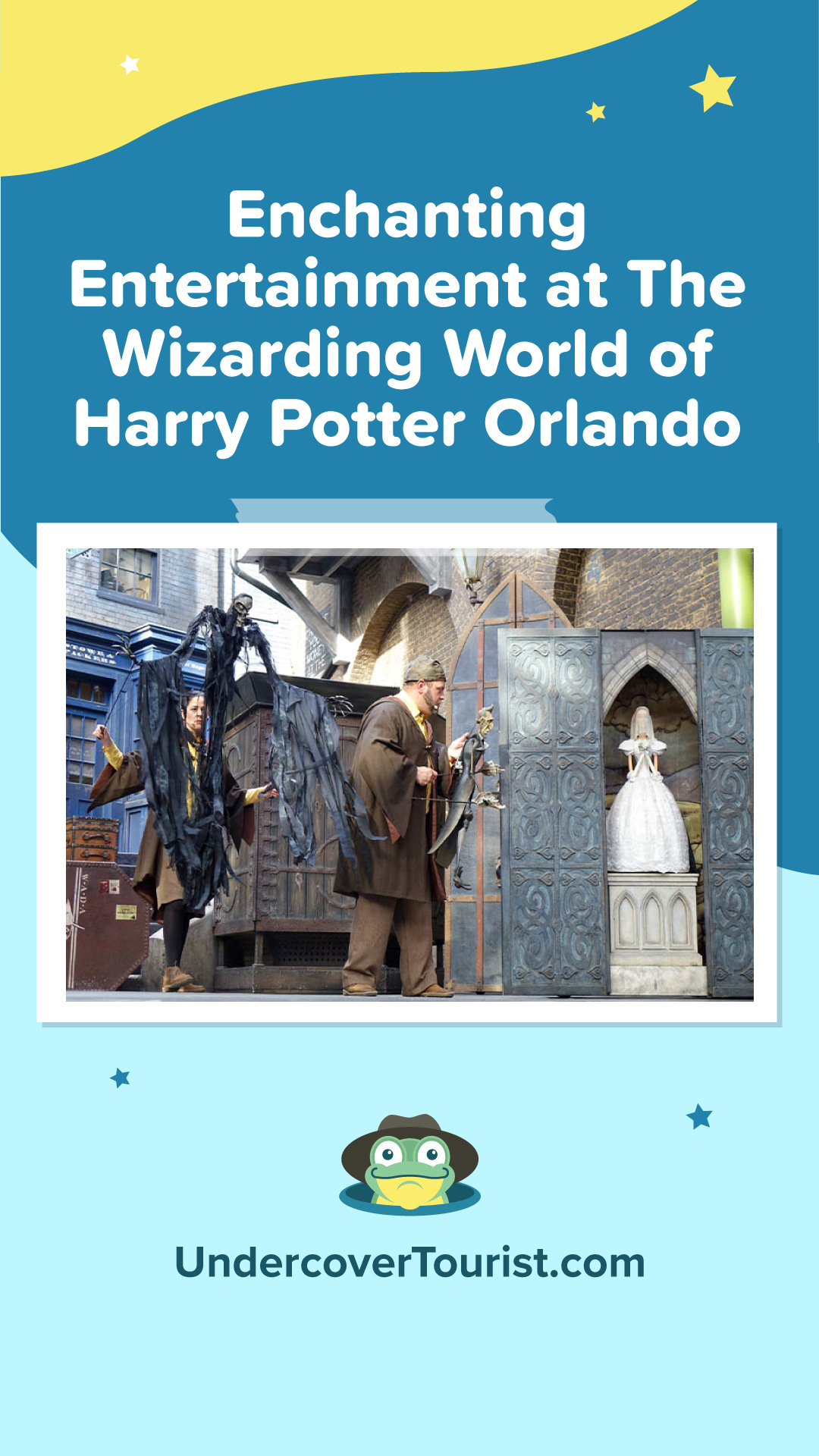 We love going to Universal Orlando Resort for a magical escape to The Wizarding World of Harry Potter! We always make a big deal out of the trip by dressing up in our house robes, casting spells with our wands, eating Butterbeer ice cream and hopping on all of the rides that take us through Gringotts, Hogwarts Castle and the Forbidden Forest. All of that takes a lot of froggy effort, though! So when we need a short break, we’ll stop to catch some of our favorite wizarding shows or chat with a couple of characters. Here’s everything you need to know about the enchanting entertainment available in The Wizarding World of Harry Potter!

Entertainment in The Wizarding World of Harry Potter at Universal Orlando

There isn’t a wrong way to go about seeing the entertainment in The Wizarding World of Harry Potter at Universal Orlando Resort. You can try to hit every single show and character interaction or pick a select few as must-dos. If you want to attempt to catch all of them, we’d toadally recommend starting out at Universal Studios Florida before heading over to Universal’s Islands of Adventure for the ultimate Wizarding World entertainment tour (tackle them in the order below!). 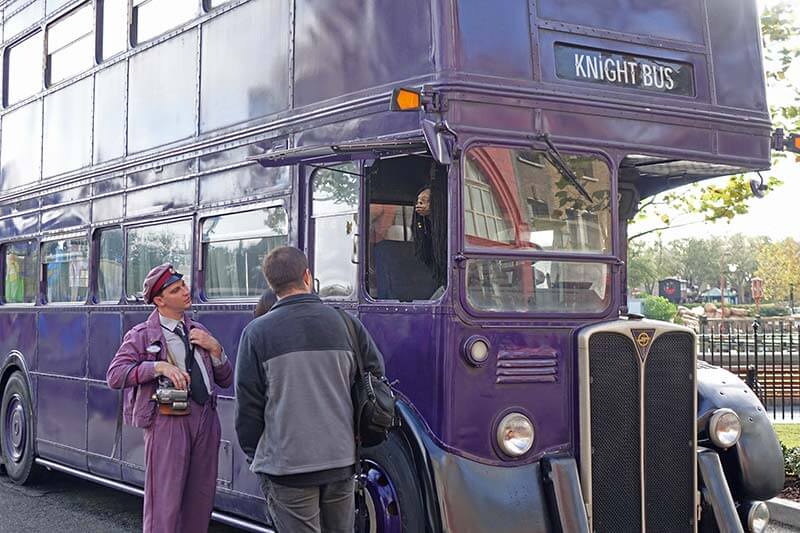 You can’t miss the triple-decker purple bus sitting outside of Diagon Alley in the middle of the London waterfront. The Knight Bus conductor and the shrunken head are an entertaining duo you shouldn’t overlook. It’s a fun, personalized experience, as the conversation is always different each time we stop by to say hi. The pair likes to crack jokes, banter with guests and pose for photos. If you don’t know what to say, try asking them questions, such as, “Who’s been the most famous passenger?” Or, “How far does the Knight Bus travel?”

Tales of Beedle the Bard 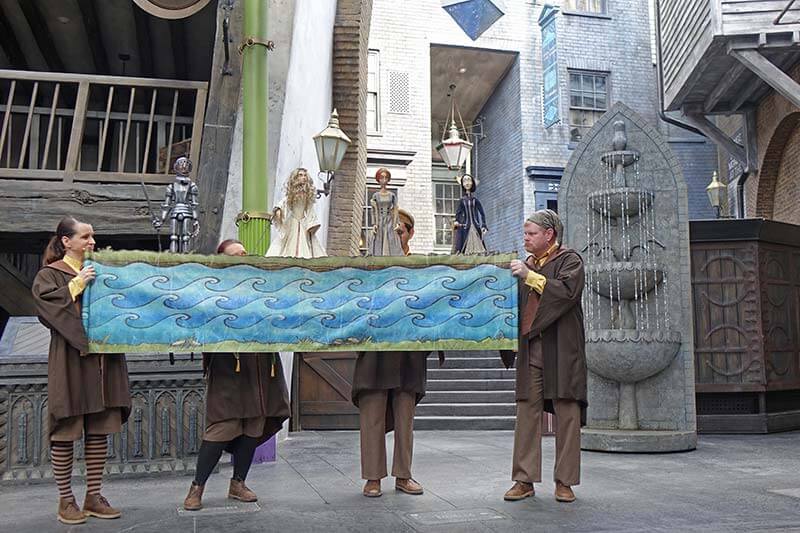 Once you step through the brick wall to Diagon Alley, prepare to be surrounded by bustling activity in a setting straight from the films! Over on the side in Carkitt Market, there is an outdoor stage where the Wizarding Academy of Dramatic Arts puppeteers re-enact two tales, The Tale of the Three Brothers and The Fountain of Fair Fortune, that make up two separate shows about 12 minutes in length. Young witches and wizards grow up listening to these popular stories by Beedle the Bard (think the wizard version of Aesop). Harry Potter fans will be familiar with The Tale of Three Brothers, which plays an important role in “Harry Potter and the Deathly Hallows.”

Multiple performances, alternating between the two tales, hoppen throughout the day. The exact showtimes change depending on the season, but you can check Universal’s website for a list of times closer to your trip (usually you can only see updated times up to three or four weeks ahead). If you’re already inside the park and on-the-go, you can find showtimes in the the Universal Orlando Resort or Undercover Tourist app.

Celestina Warbeck and the Banshees 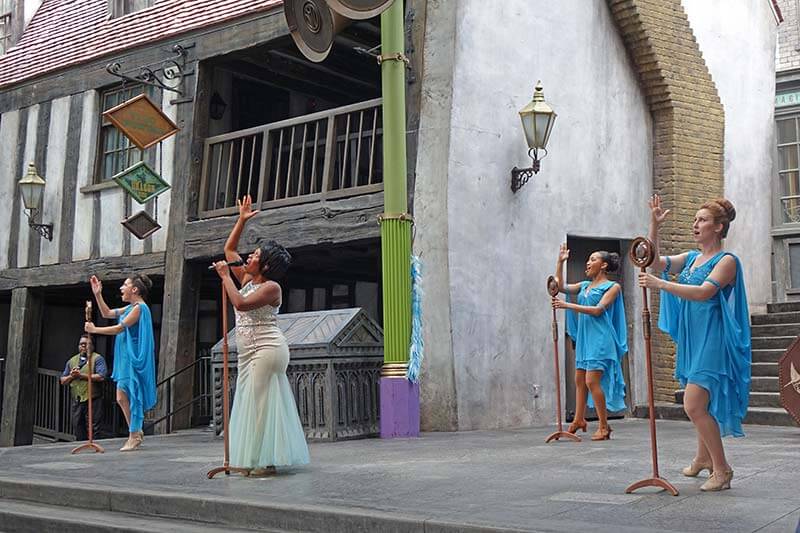 Don’t move from your spot! The same outdoor stage in Carkitt Market is where Celestina Warbeck and the Banshees perform several times throughout the day. Known as the Singing Sorceress in the Wizarding World, Celestina belts out her most popular hits, including “You Charmed the Heart Right out of Me” and “A Cauldron Full of Hot, Strong Love.” Find out why Celestina Warbeck is Molly Weasley’s favorite singer!

It’s easy to double up and dance along to Celestina’s 12-minute concert shortly before or after a Tales of Beedle the Bard show. In between shows, walk over to The Hopping Pot nearby for a refreshing cup of Butterbeer! The area is also large enough that if you just want to stop by for one song, you can pass right through. 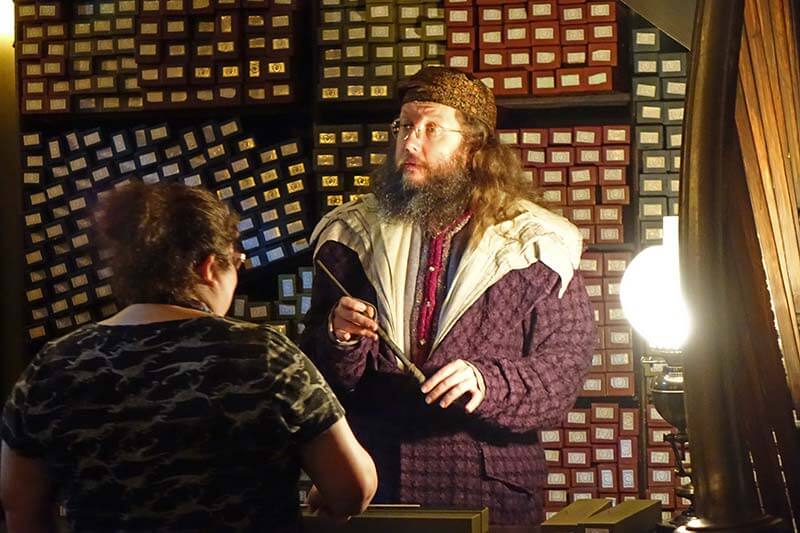 “The wand chooses the wizard, Mr. Potter.” It’s a memorable moment when Harry Potter uses his wand for the first time in the series. Now, you can experience it too!

If you only have time to pick one or two options from this list of entertainment in The Wizarding World of Harry Potter, the wand selection show at Ollivanders is a must-do. Inside the small showroom, a wandkeeper picks a random witch or wizard from the crowd. Our best tip is to stand near the front, but it’s not guaranteed you’ll be selected. The chosen one will then perform various spells to test out different wands. Ultimately, the wizard or witch finds the perfect wand pairing!

Be prepared to purchase the wand if you’re picked. While it’s not required that you buy the wand if you’re the lucky frog, it sure is hard to part ways from the wand that chooses you! We know from experience … Tad already had Harry Potter’s wand, but he was selected on his birthday. The wand ended up being a birthday present Leap and I didn’t expect! You can find Ollivanders in Diagon Alley and Hogsmeade, and both locations offer the show. For more info about wands, be sure to read up on our separate post! 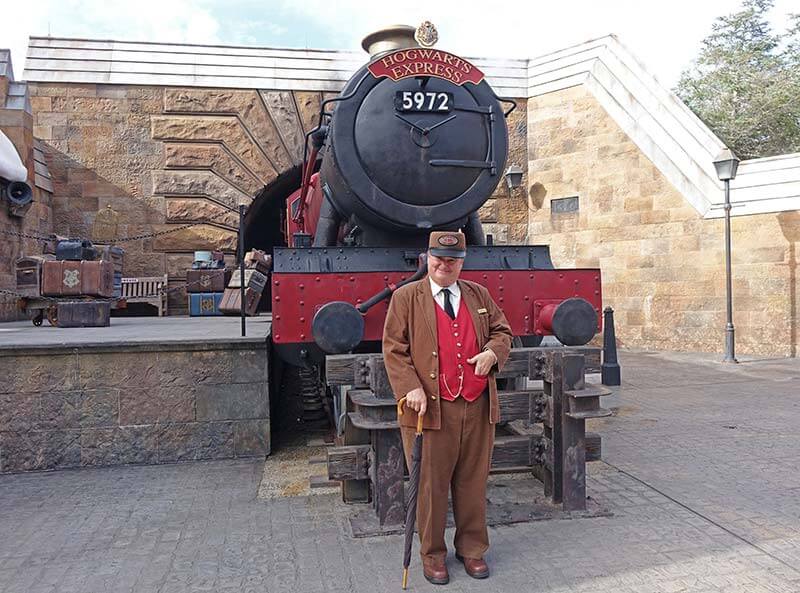 When he's not busy transporting students back and forth between Hogsmeade and London, say hello to the Hogwarts Express train conductor. He'll gladly take a photo with you in front of the train. Be sure to ask for some of his recommendations about things to do in Hogsmeade! 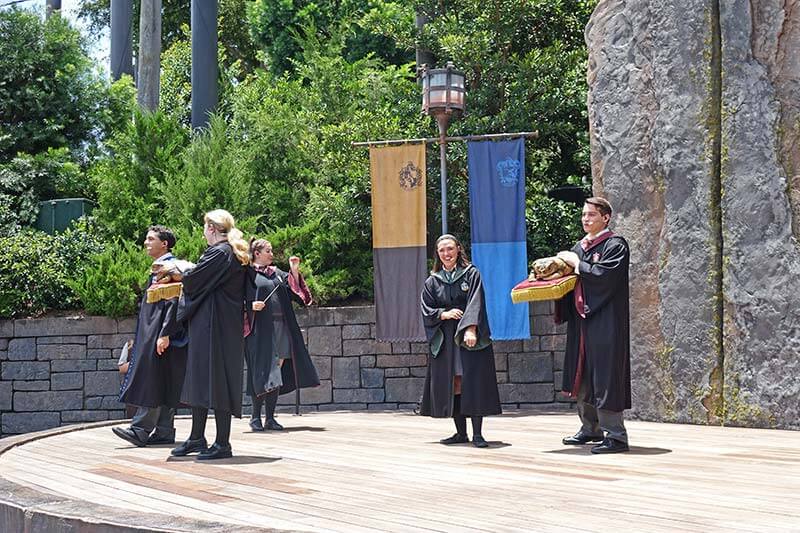 We might be a little biased (OK, maybe a lot), but the Frog Choir show is one of our favorite forms of entertainment in The Wizarding World of Harry Potter. Four Hogwarts students dressed in their robes representing each house sing a capella, along with the help from giant croaking frogs on cushions and a fellow student conductor. You might recognize some songs from the films such as “Double Trouble.” We often find ourselves singing, “Double, double toil and trouble … something wicked this way comes!” for the remainder of the day. Once the show is over, the Hogwarts students stick around for photos.

The Frog Choir performs once almost every hour on a small stage across from the Butterbeer cart between Hogwarts Castle and Hogsmeade. 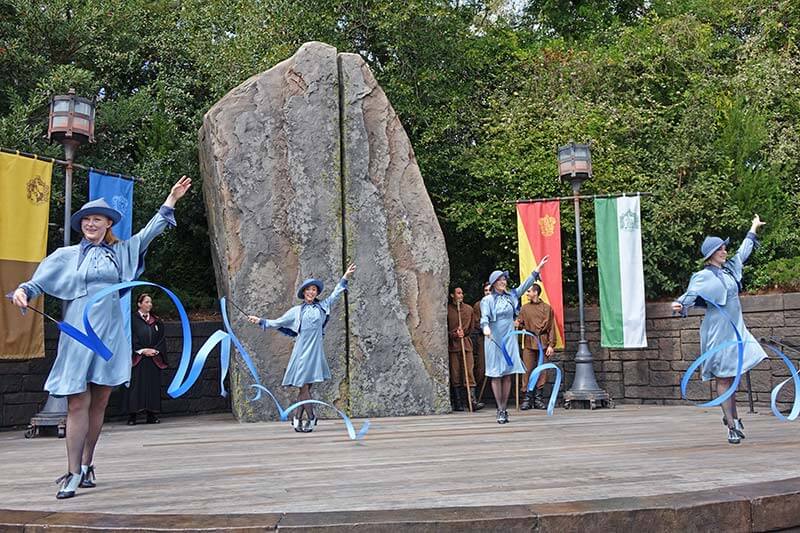 In “Harry Potter and the Goblet of Fire,” Hogwarts hosts two other wizarding schools for the Triwizard Tournament, in which one student from each school competes in three dangerous tasks that test their magical ability and courage. Of course, things don’t go as planned — but we won’t spoil the rest of the story. The Triwizard Spirit Rally features a Hogwarts student introducing students from the two other wizarding schools, Durmstrang Institute and Beauxbatons Academy of Magic. Each school showcases their skills in a short performance. The boys from Durmstrang show off athletic movies in a martial arts-style routine, and the girls from Beauxbatons dance with ribbons. They will also pose for pictures following their performance.

The Triwizard Spirit Rally takes place at the same stage as the Frog Choir show, and there are multiple rallies throughout the day.

The Nighttime Lights at Hogwarts Castle 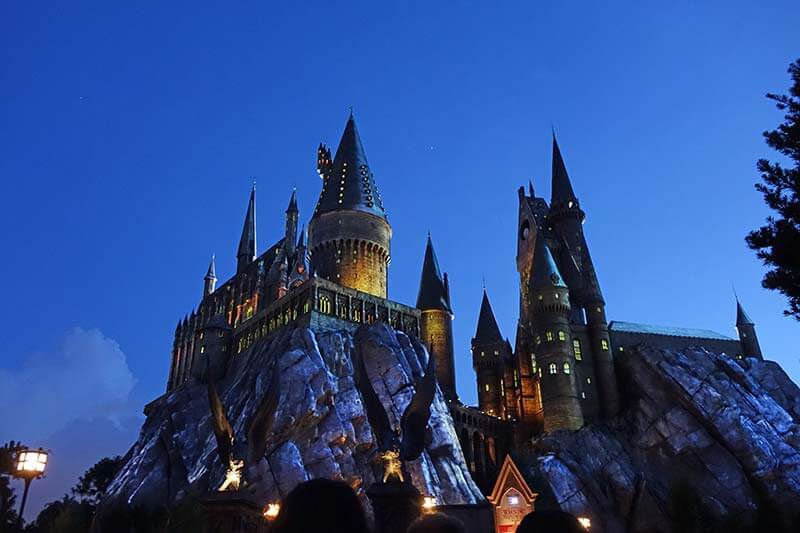 End your magical day at The Wizarding World of Harry Potter with The Nighttime Lights at Hogwarts Castle. Projections and lighting effects are cast upon the exterior of the castle while the Harry Potter score plays (it’s hard not to tear up when you hear "Hedwig’s Theme") and pyrotechnics blast into the night sky at the end. Cheer as your Hogwarts house is represented! Depending on the season, there are different versions of the castle projection show: The Magic of Christmas at Hogwarts Castle during the holidays and The Dark Arts at Hogwarts Castle, which debuted in September 2019.

Once the sun sets behind the castle, the show begins shortly after. It plays intermittently until the park closes. You’ll have to double check showtimes to see if The Nighttime Lights at Hogwarts Castle will be available during your trip, as it’s not always offered daily, especially during non-peak times. Stay up to date with showtimes on Universal’s website or app.

There you have it: A full day of magical entertainment in The Wizarding World of Harry Potter! What show or character interaction do you not want to miss? Let us know if you're going to sing along with Celestina or joke around with the Knight Bus conductor.

Related: Guide to Dining in The Wizarding World of Harry Potter at Universal Orlando