Where (and How!) to Use Wizarding Wands at Universal Orlando Resort 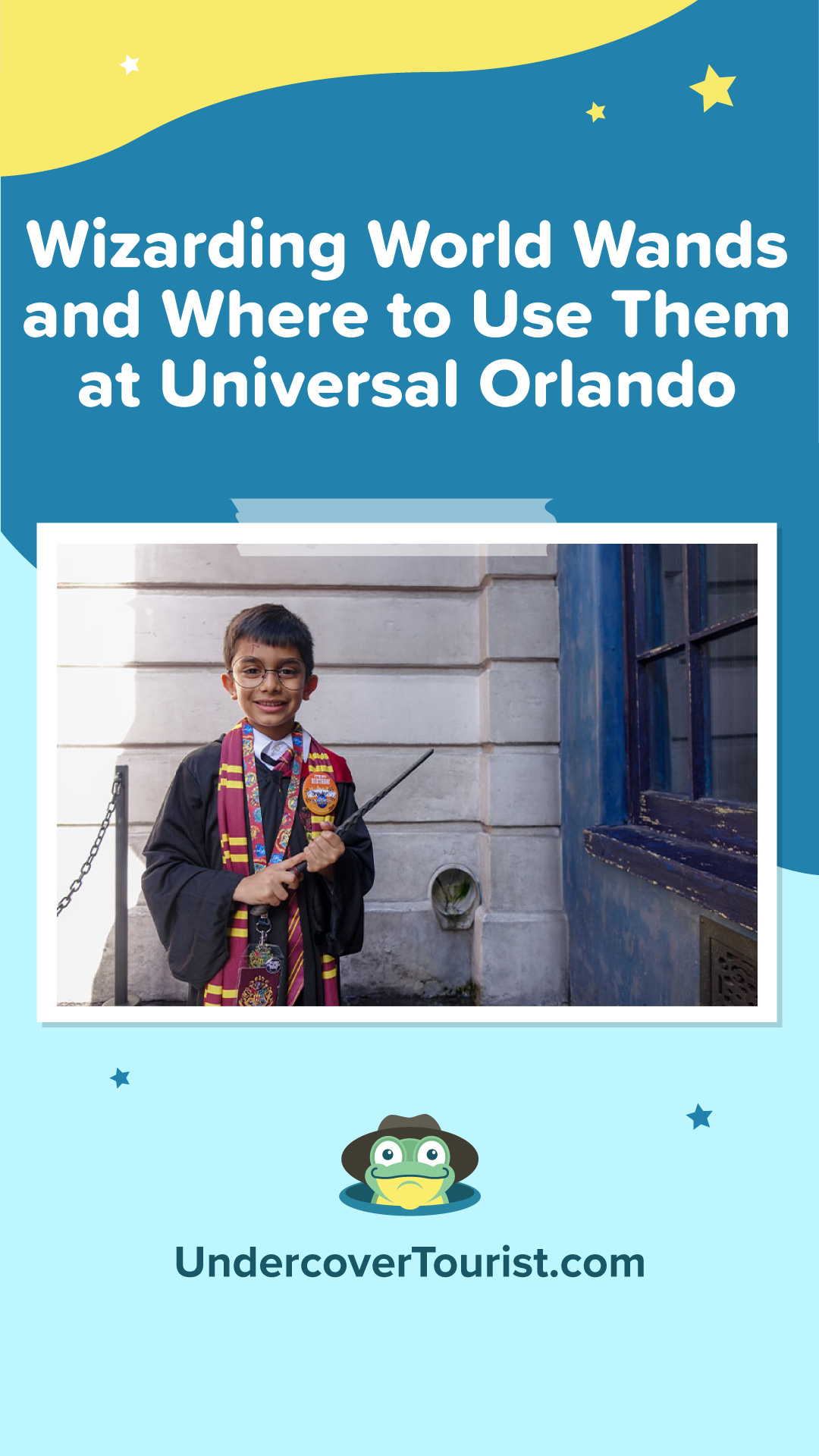 ‘Sup! Tad here. One of my favorite parts of the entire “Harry Potter” series is when Harry Potter goes to Diagon Alley for the very first time on his 11th birthday. As a reader or movie-watcher, you’re discovering the magic of the Wizarding World alongside Harry. He gets his Hogwarts robes, school supplies and, of course, Hedwig! (Hmm, I might be turning a different shade of green.) Lastly, but most importantly, he stops by the wand shop, Ollivanders. I doubt I’m the only one who gets chills when the wand chooses Harry!

Luckily, you can experience the same scenario yourself at Universal Orlando Resort. Let the wand choose YOU at Ollivanders, which has two locations — one in Diagon Alley and the other in Hogsmeade. There are different types of Wizarding World of Harry Potter wands, which I’ll explain in more detail below! Psst, if you get an interactive wand, you’ll be able to cast spells along the cobblestone streets of Diagon Alley and snowy rooftops of Hogsmeade. Swish and flick! 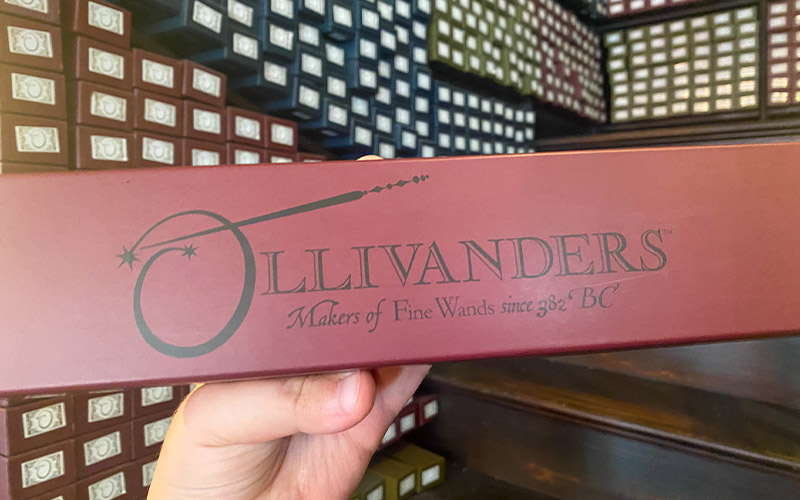 If you want the full wand shopping experience, look no further than Ollivanders. This famous wandmaker and his descendants have been crafting wands since 382 B.C. In The Wizarding World of Harry Potter, you can find two Ollivanders stores, one in each park. Ollivanders carries 13 original wand designs as well as character wands. The original designs are made out of birch, rowan, ash, alder, willow, hawthorn, oak, holly, hazel, vine, ivy, reed or elder woods. The range of character wands is quite extensive. You can find the wands of major characters, such as Harry Potter, Professor Dumbledore and Voldemort, as well as many supporting characters, including Mad-Eye Moody and Nymphadora Tonks. 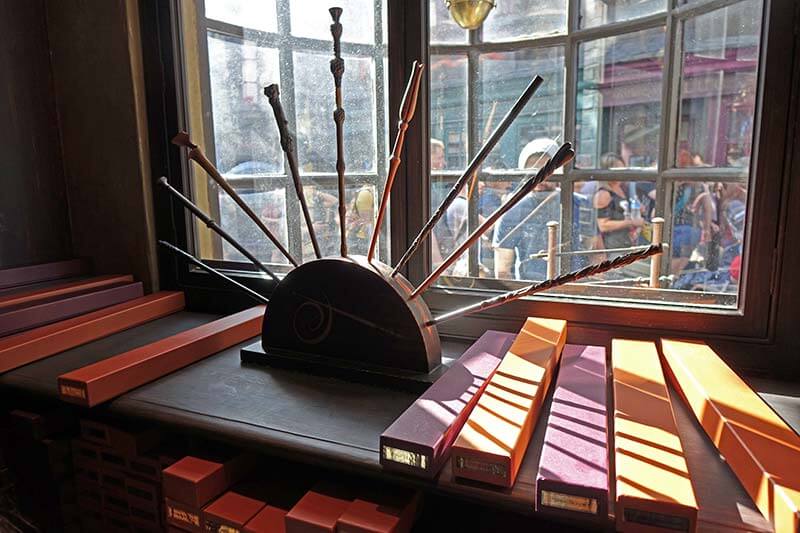 You can also find The Wizarding World of Harry Potter wands at Wands by Gregorovitch in Diagon Alley (this outdoor stand only sells character wands and most of them are interactive models), as well as the main gift shops near each park’s entrance and the Universal Studios Store in Universal CityWalk.

Each wand comes with a double-sided map that shows the spell locations in Diagon Alley and Hogsmeade. If you hoppen to lose your map, you can ask for another one at Ollivanders for free. You can bring the same wand for future trips to any Universal theme park (yes, even at Universal Studios Hollywood) and it should still work! But if your wand is having any trouble with casting spells (likely that the tip of the wand is scratched), go to Ollivanders for a “wand repair” and they will gladly replace it for you.

At either Ollivanders location, be sure to check out the wand selection show! During the show, the wandkeeper randomly picks a witch or wizard from the group. There is no guaranteed way to be selected, but it may help if you stand near the front of the room so you can be easily seen. The wandkeeper will then give the participant a few different wands to test out with various spells before they find the perfect match. If you’re the lucky witch or wizard, you have the option to purchase the wand that chose you. You can also peruse the other wands in the shop as you exit the wand pairing room.

During our most recent visit, I just hoppened to be picked! How cool is that?!? It was truly a memorable experience that I'll cherish forever. After some failed attempts watering a bouquet of flowers and moving a ladder, a reed wand with a phoenix tail feather core picked me. Talk about a magical moment! Phoenix feathers are capable of the greatest range of magic, so I can't wait to test out its versatility and power on my next visit.

We’d definitely recommend the show to huge “Harry Potter” fans. Since the show runs short (it’s about five minutes in length), we’d advise you to skip it if there’s a long line out the door and you’d have to wait more than 15 minutes. If it’s a top priority for you, head to Ollivanders first thing in the morning or later at night when the crowds are lower. It's also important to know that the location in Diagon Alley has two showrooms (as opposed to Hogsmeade where there's only one), so the line moves much more quickly. On our most recent visit, we went to the Diagon Alley location just after lunch and only waited about 10 minutes to go in! 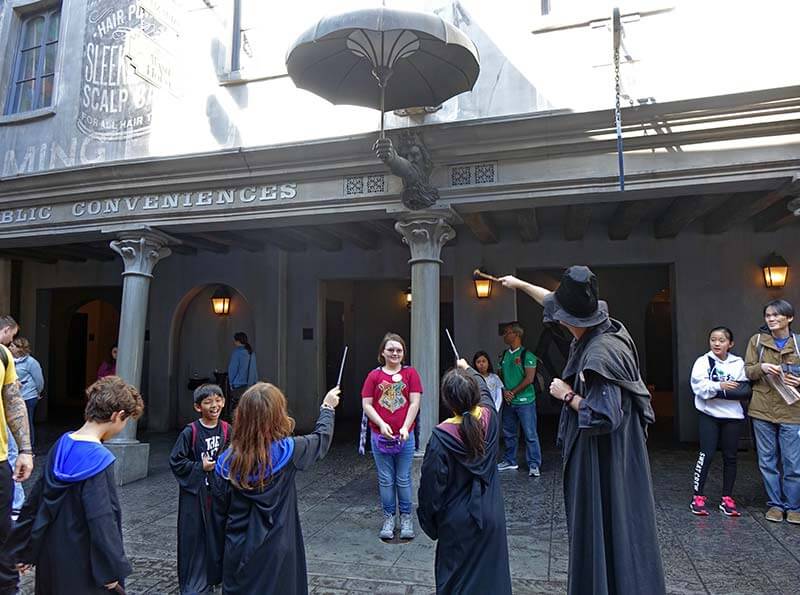 As you walk around Hogsmeade or Diagon Alley, use your map to look for gold medallions on the ground. These markers indicate where you should stand, what spell to say and how to move your wand.

When you cast a spell, extend your arm and flick your wand, mainly using your wrist. You do not need to make full-arm movements. Some spells are harder than others. It may take a few tries before you’re able to cast a spell properly, so do not fret and automatically assume that you’re a muggle or squib (a person who's born into a wizarding family but does not possess any magical abilities). There are helpful wizards and witches who walk around to assist anyone having trouble. And if it seems that you’re really struggling, you can get your wand inspected and repaired at Ollivanders. 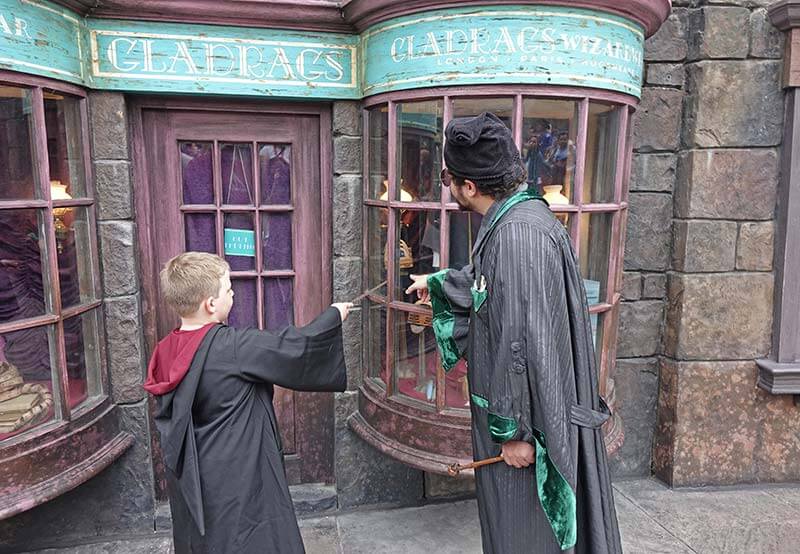 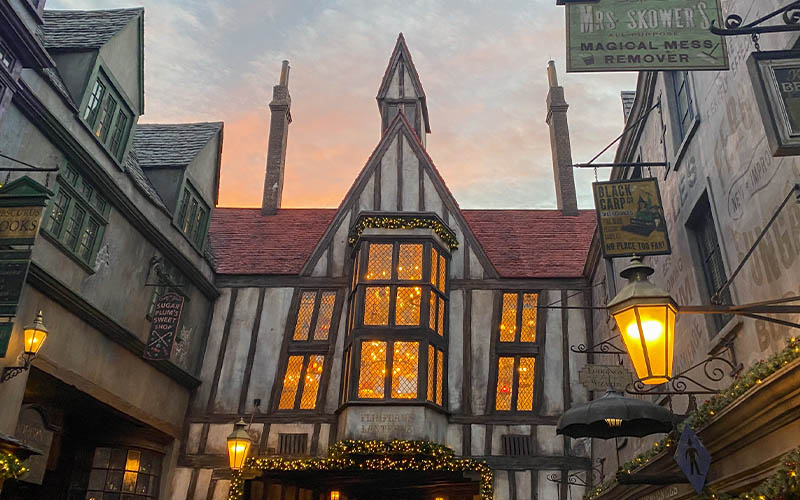 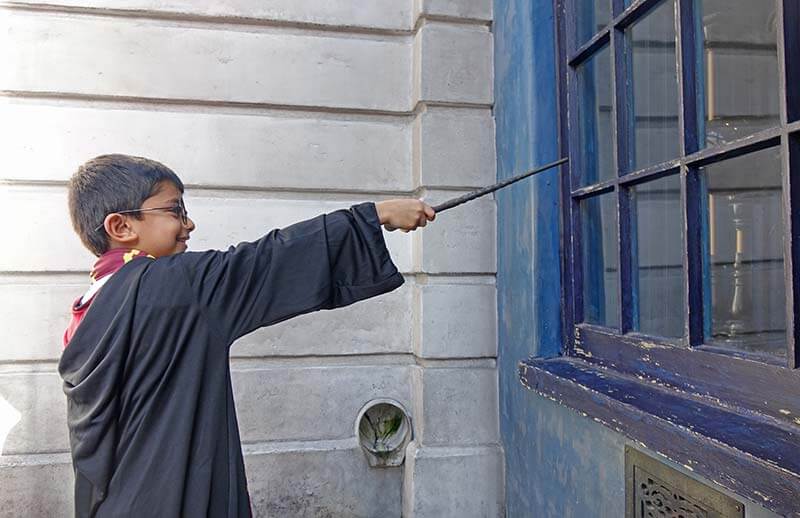 There are also some hidden spells that you can’t find on the map. They do not have the gold medallions to mark them:

As you enter Knockturn Alley, look at your spells map under the blacklight and the spell locations will illuminate, as it’s quite dark in this dodgy area of the Wizarding World. 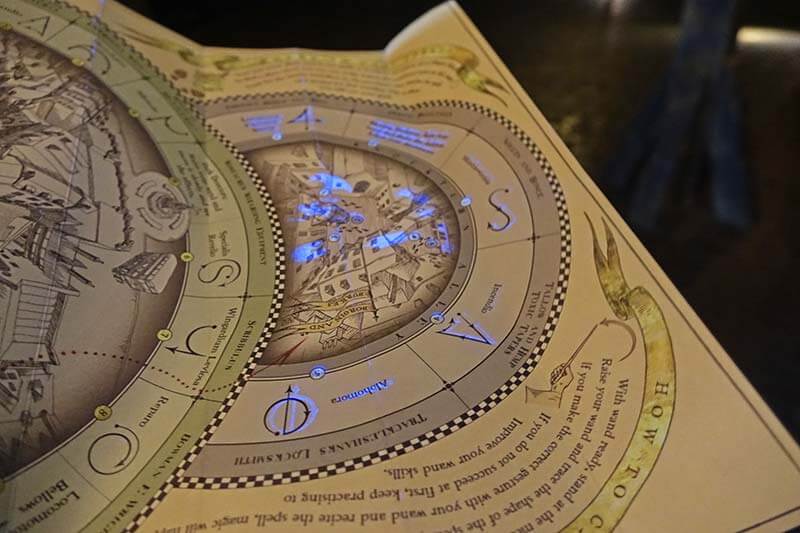 We could practically spend an entire day using our interactive Wizarding World of Harry Potter wands around Diagon Alley and Hogsmeade. What's your favorite spell to cast? Share in the comments below!

Related: Guide to Dining in The Wizarding World of Harry Potter at Universal Orlando Resort