How to Use Your Datapad in Star Wars: Galaxy's Edge Disneyland 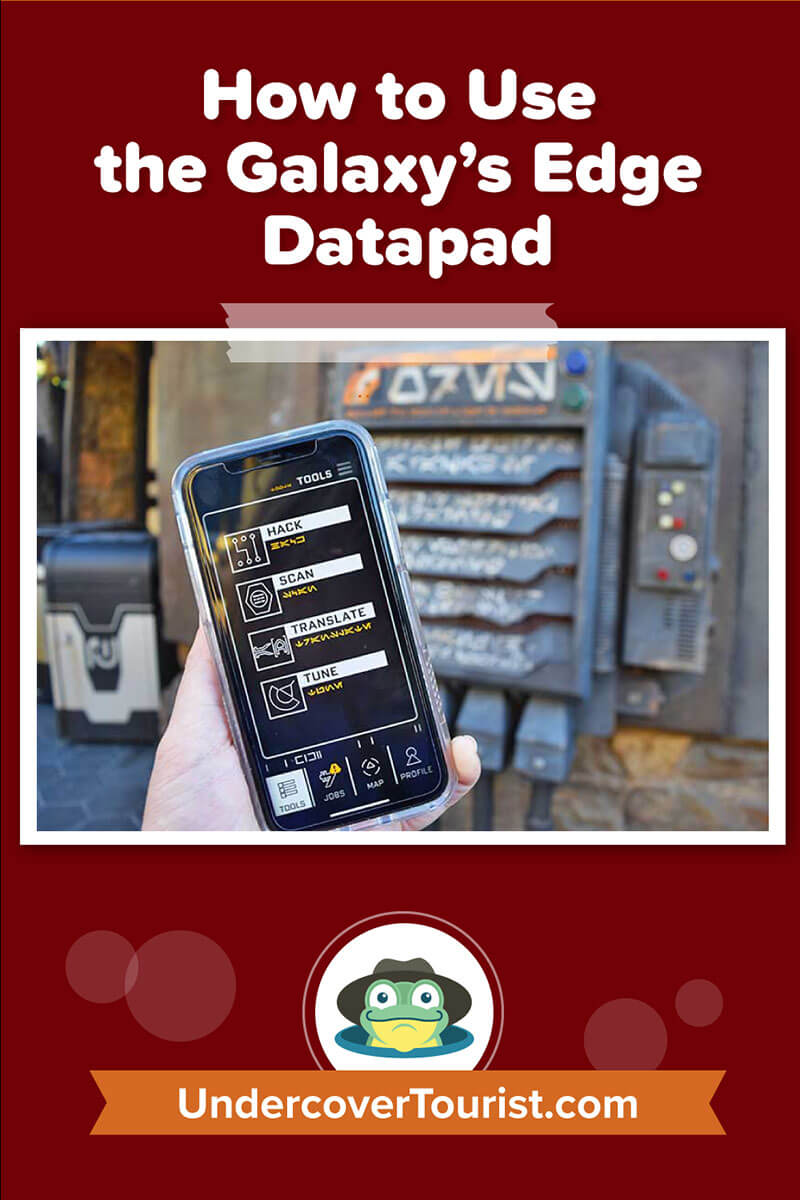 'Sup gamers and Star Wars fans? Tad here, Jedi Padawan and the technical genius of my frog squad. I’m here to introduce you to the Galaxy’s Edge Datapad. The Datapad is a toadally cool part of the Play Disney Parks app. You see, when you enter the village of Black Spire Outpost on planet Batuu in Star Wars: Galaxy’s Edge at Disneyland, there is a completely hidden world you can take part in via the Datapad. You can use your phone to immerse yourself in parts of the village and become part of your very own story. Through the Play Disney Parks app you can perform tasks around Black Spire Outpost, earn achievements and improve your status (aka street cred) in the land.

Be aware that using the Datapad can attract the attention of First Order officers and stormtroopers patrolling the land. If they catch you hacking into their control panels, they are definitely going to be questioning you! You might want to think of some excuses for your behavior in advance if you are not on their side. You might also choose to thwart the Resistance. It all depends on your goals, and your allegiance may vary based on the task! Let's get into the Datapad "deets." 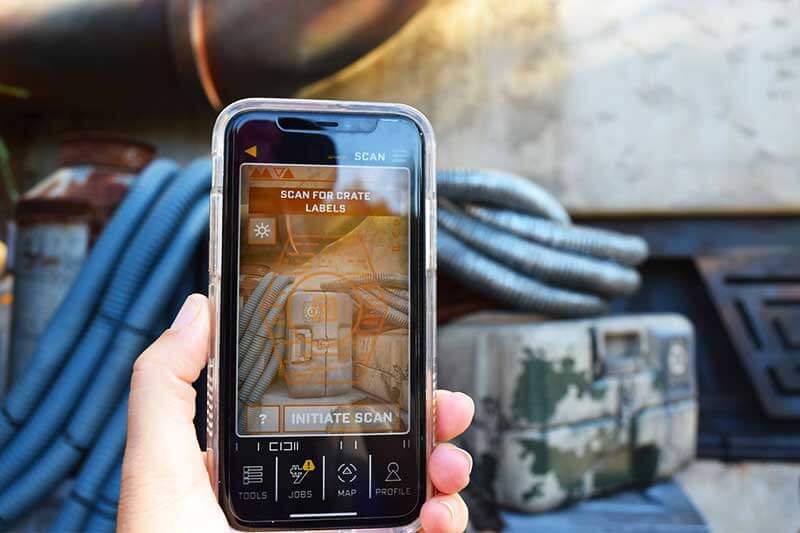 You’ll want to do a little prep work before you visit Disneyland so that you can work out any problems. This way, you'll be toadally ready to go when you enter the land and can fully activate your Datapad, which is the program in the app that you use in Star Wars: Galaxy's Edge (more on this below).

Before you begin, download the Play Disney Parks App on a smartphone. If you have an older phone, you may need to update the operating system and make sure you have enough memory to operate the app. You can check this at home by loading everything before your visit.

When you open the app, you need to:

Once this occurs, you are ready to begin! Keep in mind that your Datapad will not be fully functional until you have entered Star Wars: Galaxy’s Edge. But it’s a good idea to look around in the Datapad before your visit and get a sense of how things work or how to prepare to earn achievements or join a Flight Crew for rides such as the Millennium Falcon: Smugglers Run. I like to know what to expect in advance so I do not miss out any fun (you might say I'm a bit of a planner like my mom ;) ).

One thing you can do from home is play a Black Spire trivia game! I definitely learned a lot that I did not know from the game! It was a bit humbling, actually. 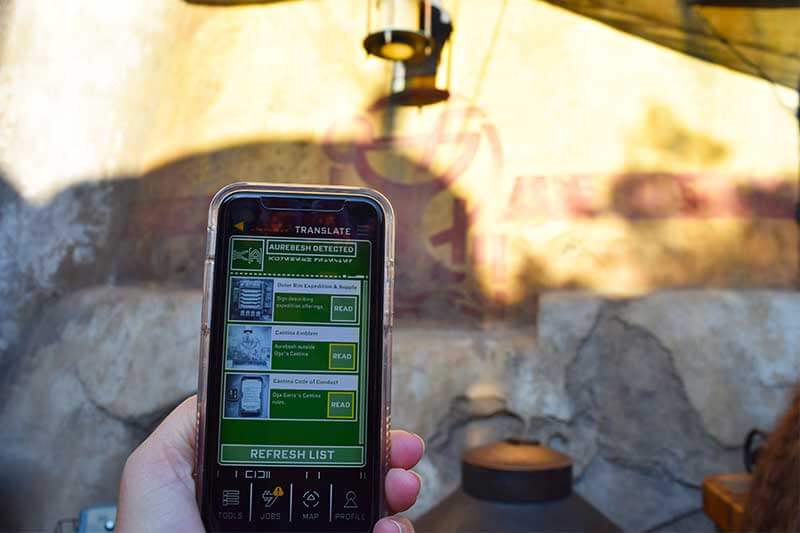 Aurebesh is the language of Black Spire Outpost. It sounds a lot of like English and has local phrases. But the alphabet is quite different, so you can use your Datapad to translate, since most signs in the land are in Aurebesh. In Aurebesh, the word "Datapad" is both the name of a cell phone and also the name of the program that gets activated in the app when you enter the land. Under "Tools," you can translate from home by typing in Aurebesh symbols if you have anything you want to translate. We found it much easier to just wait until you are in the land when you can hold your phone up to Aurebesh words and symbols to translate them into English.

Once you visit the park, bring an external charging device and cord with you so you do not drain your battery by playing on your phone. It’s always a good idea to have a power source to stay fully juiced when visiting Disneyland. But using the Disneyland app and Disney Parks app, while cool, will take a toll on your battery.

Budget time to play with the app in the land. If your family is not into it, let them know you have some jobs to do and send them to a show or on a ride in Disneyland ... or maybe you can convince them to explore with you! It’s up to you how much time you want to spend, but you could easily spend a few hours in the app if you have the time. You can also use it in line for rides by completing jobs and scanning cargo. You'll want to begin that process when you first get in line.

Working in the App 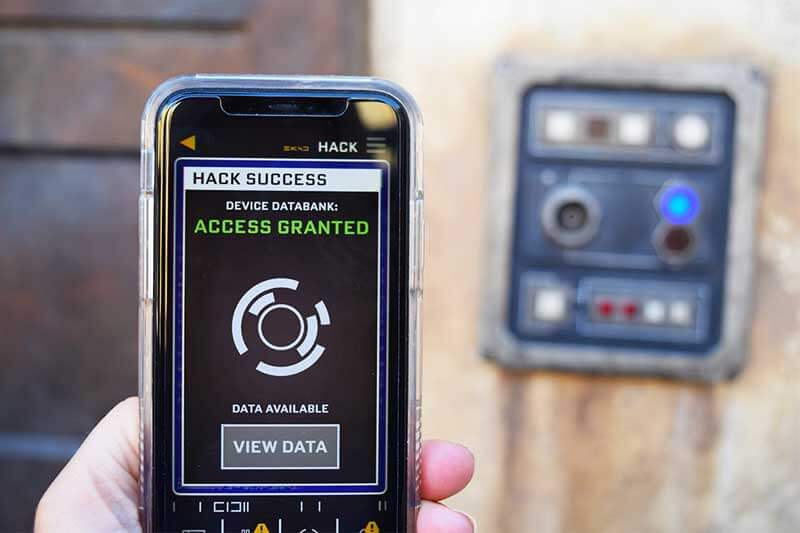 When you get to your home screen, you’ll see four categories at the bottom. When you are in the park, you can access all of the jobs. The nice part about looking for jobs is that it will show you the ones that are closest to you. It also shows you pictures of the panels, text, crates or antennas you are looking for. That way, you do not have to run all over over the place to seek them out.

Using Tools, you can: 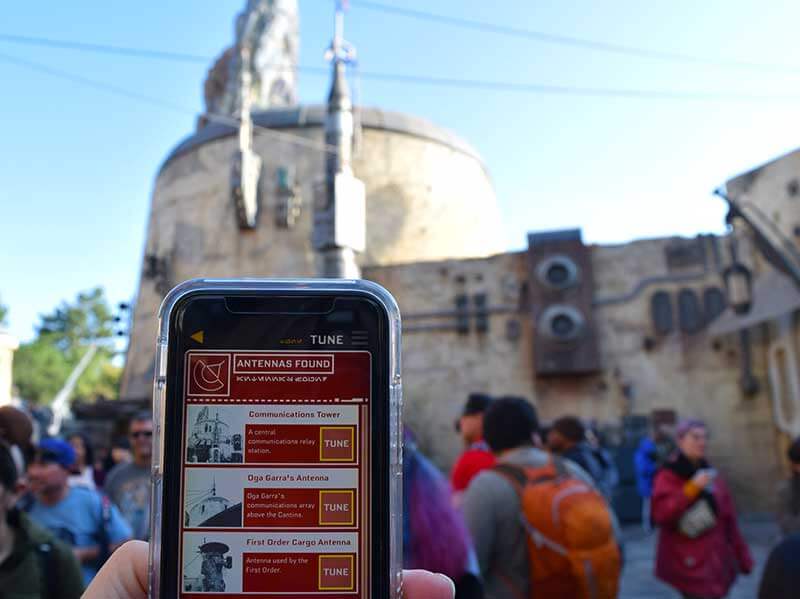 Jobs — You can take on jobs from the jobs board. Complete jobs to earn credits, find rewards and help with your standing in the outpost. You can choose how to approach a job and either support the First Order or the Resistance. Join a flight crew for the Millennium Falcon. Help protect the outpost's security ... or help breach it! Find hidden objects. There is no shortage of work to be done.

Map — This helps you navigate and find locations to use tools.

Profile — This is your status in the outpost. It’s where you can view the items you collect and trade. You can use your Profile and Translate functions outside of the outpost to see your status, look up equipment, see star maps, check schematics, see droid data, view the transmissions you have discovered and see what titles you have earned.

I just checked my profile, and I am now a pirate after my last trip on the Millennium Falcon because I earned between 8,000 and 9,999 credits while working for Hondo Ohnaka! You'll see all the different titles in gray, and they appear in color as you achieve them. Some are easier to acquire than others! 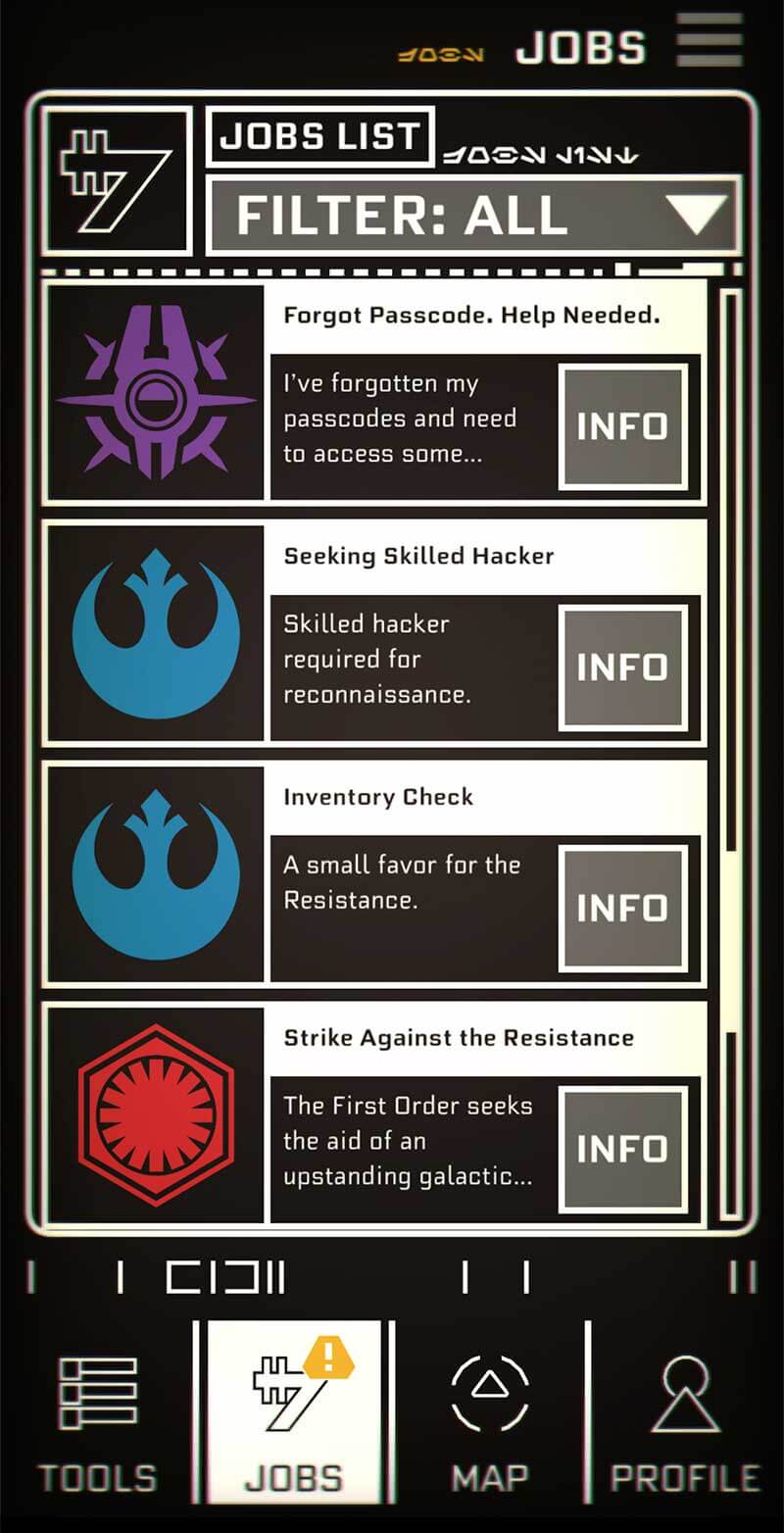 Playing with the Galaxy’s Edge Datapad can be pretty involved. When you pick up a job, you may need to pick a side to work for. You’ll get the story behind it. There is a lot of reading to get you into the story. You sometimes need to solve puzzles, and they are aren’t always intuitive. Delving into the Datapad is not a task to take on if you are in a hurry or distracted by others in your party who have different interests and are pressuring you to move on. It’s best to devote some time to your tasks and even have friends join in and work together to locate physical items mentioned in the app.

I found it more fun to play with the Datapad after I already had a chance to explore the physical space of Batuu and get the lay of the land. There is so much to take in, so look around the land and enjoy it before delving into the tiny details with the Galaxy’s Edge Datapad. Although, I have to say, the translate tool could be helpful to use early on when you do not know the names of shops because they are all written in Aurebesh! If you are lucky enough to visit more than once, you can enjoy collecting more and more titles over time. 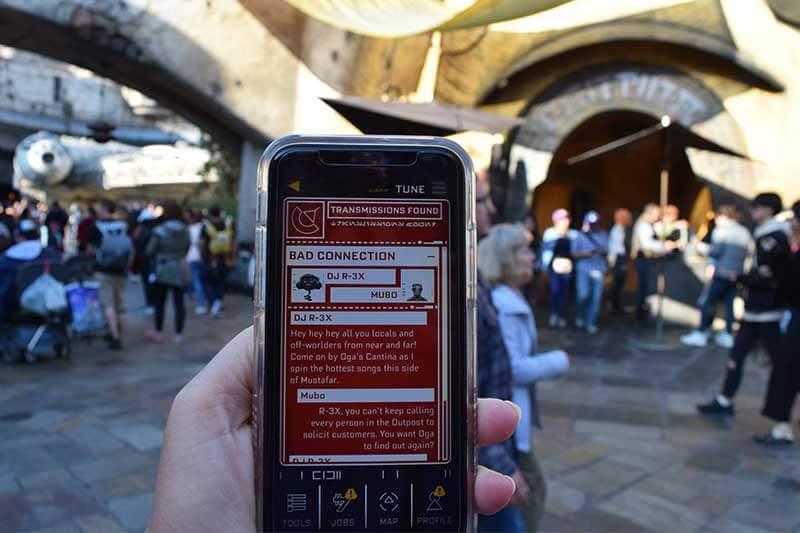 You can read more about the rides, food and things to do in my Galactic Guide to Star Wars: Galaxy’s Edge Disneyland. Besides using the Datapad, some of my favorite experiences include building a droid BFF at Droid Depot, building a lightsaber at Savi's Workshop and having a drink (nonalcoholic for me, of course) in Oga’s Cantina. You'll want to make reservations for those experiences. And interacting with roaming characters in the land always leads to unique and surprising fun. Using the Datapad — and getting caught by First Order officers and stormtroopers when hacking or scanning — is a little intimidating, but also toadally exciting! I saw Kylo Ren stop a guest who was using their phone to hack. He insisted a stormtrooper wipe the Datapad clean!

It’s time to start your own journey as a visitor to Batuu with the Star Wars: Galaxy’s Edge Datapad at Disneyland. Do you have any questions? No doubt you will want to save some credits (that's dollars) on your trip. Check out Undercover Tourist's hoppin' deals on discount Disneyland Resort tickets.