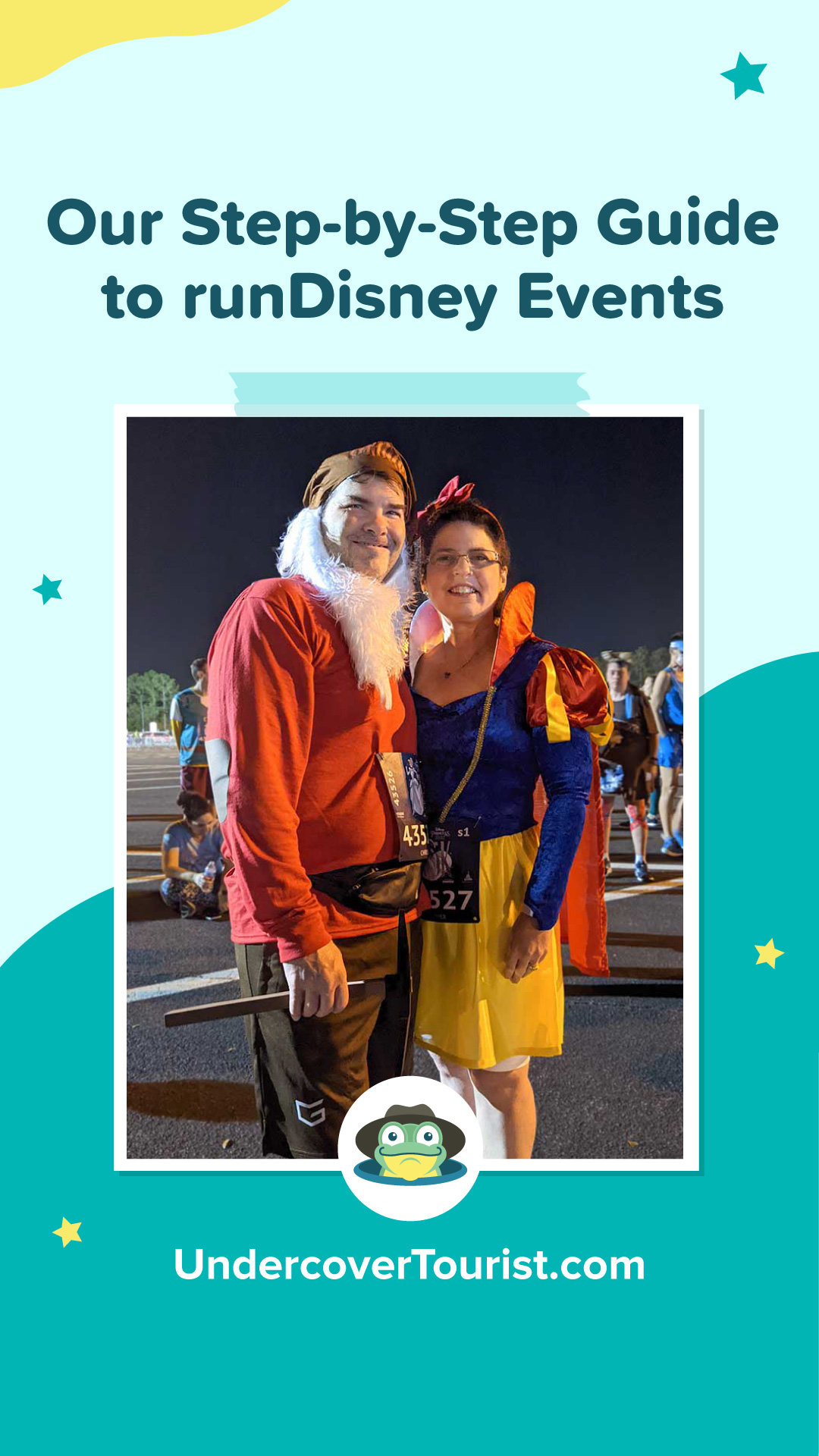 Did you know you can actually run through Cinderella Castle? How about running around the world at EPCOT? Such motivation! "Every mile is magic" with runDisney as you race through the Disney Parks. From 5Ks to marathons, there's something for all ages and skill levels. Enjoy character stops, live entertainment, spectacular views and the coveted Disney medal.

I recently joined thousands of other royal runners for the Princess 5K and it was such a fun morning! So many people got dressed up in themed outfits that showcased a lot of creativity. Grab your ears, tutus and accessories to fully immerse yourself in this unique and magical experience.

If you're interested in hoppin' in for a runDisney weekend, you'll want to plan ahead as race registration opens over seven months in advance, and many races can sell out in just a few hours. The dates for the 2023-2024 races have recently been announced, so mark your calendar!

Hop along with us as we go over all the details for runDisney events, including a recent race report and tips and tricks. 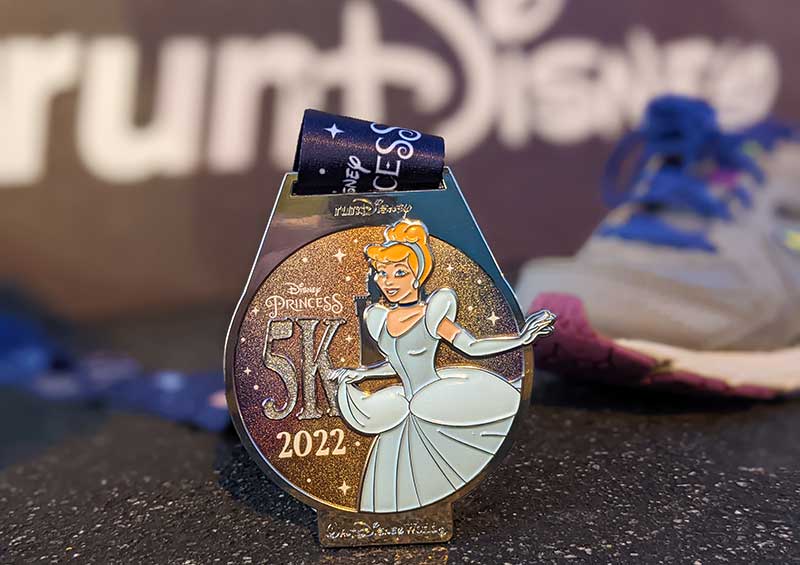 Most weekends consist of three early mornings of a 5K, 10K and half marathon. Those up for the task can compete in challenges in which they participate in multiple races in one weekend. You may hear someone say they are "perfect" for a certain race. That means they have completed that runDisney race for every year the race has existed. Major props!

Burn off some calories from the many food booths at the EPCOT International Food and Wine Festival with this fun race weekend. The 2022 race themes are "Coco" for the 5K, "Raya and the Last Dragon" for 10K, "Soul" for the Half Marathon and Genie for the Challenge. This particular race also usually has an after-party for runners at the Food and Wine Festival. The party is included with the race registration fee for runners, but friends and family can purchase tickets to attend with them. General registration for the 2022 event opened March 22, 2022, and more registration info will be announced later for the 2023 event.

The biggest runDisney event each year is the Walt Disney World Marathon Weekend. As the only event with a full marathon, this event has been running the longest (pun intended) and will be celebrating its 30th anniversary in 2023 with '90s retro vibes! General registration opened April 19, 2022, for runDisney's flagship event, which is usually themed to Mickey and friends. This weekend is also more notoriously known for crowd and road impacts, especially with the full marathon.

Grab your tutus and tiaras because this royally fun event shouldn't be missed. The Princess Half Marathon Weekend celebrates the iconic Disney princesses. The 2023 themes will be Jasmine for the 5K, Belle for the 10K, Moana for the Half Marathon and Cinderella for the Fairy Tale Challenge. General registration for the 2023 event opened June 21, 2022.

The inaugural Springtime Surprise Weekend debuted in 2022 and will rotate themes every year. The 2022 addition brought back fan-favorite races, including Expedition Everest 5K, Race for the Taste 10K and the Tower of Terror 10-Miler. Springtime has replaced the Star Wars Rival Run Weekend, though we hope to have this theme return again in future iterations.

What to Expect at a runDisney Race

So, you've registered, trained for months (well, attempted to, at least) and now your race is upon you. Here's a detailed race report of the Princess 5K so you can get an idea for future events.

Before race day, you'll need to stop by the runDisney Expo at ESPN Wide World of Sports. Here, you will pick up your bib, shirt and clear gear bag. There is a whole indoor stadium of vendors to shop through, along with official runDisney merchandise for sale. Expect long lines on the first day for the race-specific collections; there will be limited sizes and inventory if attending on the remaining days. 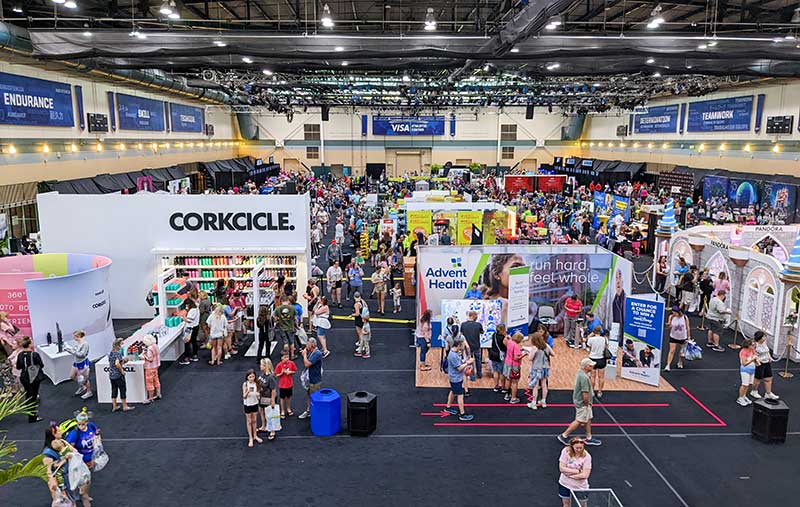 With the race starting at 5 a.m., try your best to go to bed a little bit earlier for the week leading up to the race. Minimally, cut off screentime earlier to help get your brain in sleep mode. Don't stress too much about your lack of sleep (that'll just cause you to get less sleep thinking about it). Adrenaline will keep you going through the race morning and then you can look forward to the glorious post-race afternoon nap.

On race day, I left about 3 a.m. and arrived at the EPCOT parking lot about 3:30 a.m. (make sure to take a photo of the row. You’ll post-race self will thank you). We headed through security and over to the pre-race area with a DJ and photo-ops. Around 4 a.m., I headed into my assigned "corral" or starting group. For the 5K, you submit your anticipated pace-per-mile and then will be placed in one of three corrals. For the longer races, you’ll need to submit an official race time to get into the earlier corrals. 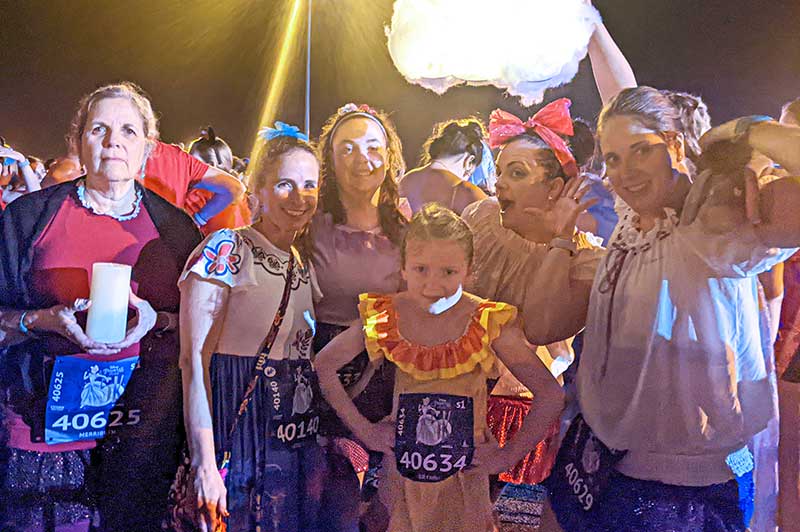 There was a variety of music playing for the pre-race playlist, including lots of songs from "Encanto." Speaking of the newest popular film, we saw lots of runners dressed up in fun outfits, and even some families dressed as our favorite Madrigal family! And of course, lots of royal runners dressed as Disney heroines in honor of the Princess theme. 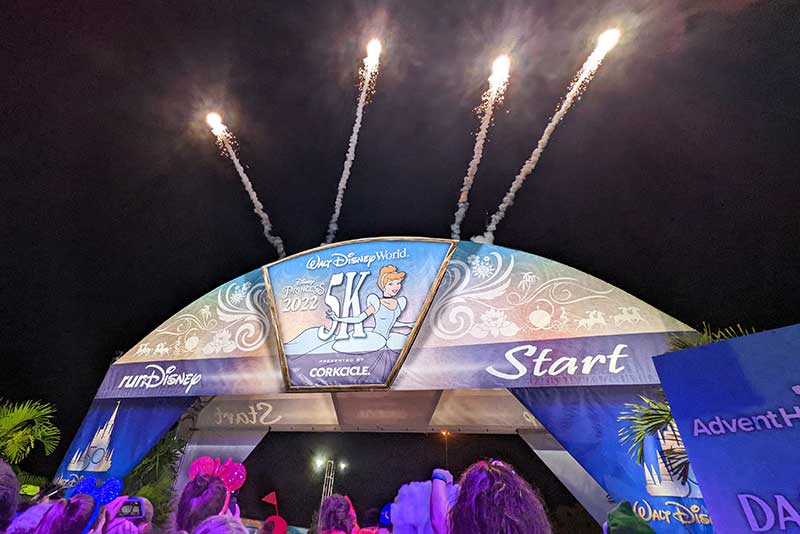 And they're off! runDisney does small section starts so you can have your own firework start moment. Thankfully, you're full of excitement because the first mile is just around the EPCOT parking and some backstage areas (that's the cast member-only areas). But around the mile marker, we saw our first characters — Merida, Pocahontas and Moana! With one line for all three princesses (meeting individually in a row), this line was long. Some people said they waited about 40 minutes. I decided to bypass this line due to the length and continued on.

Traveling along at the backstage portion behind Test Track, we saw Lilo and Stitch meeting runners. We came on-stage to Mexico as we started our circle around World Showcase. I stopped to get a photo with Elsa in Norway, who alternated with Anna. Photos are very fast, often just one photo from the PhotoPass photographer since there are so many people to get through. Attendants will take them on your phone as well. Photos can be downloaded later by using your bib number (more information is on the back of the bib on how to link to your account). So, no worries about tapping a MagicBand or getting a photo card. 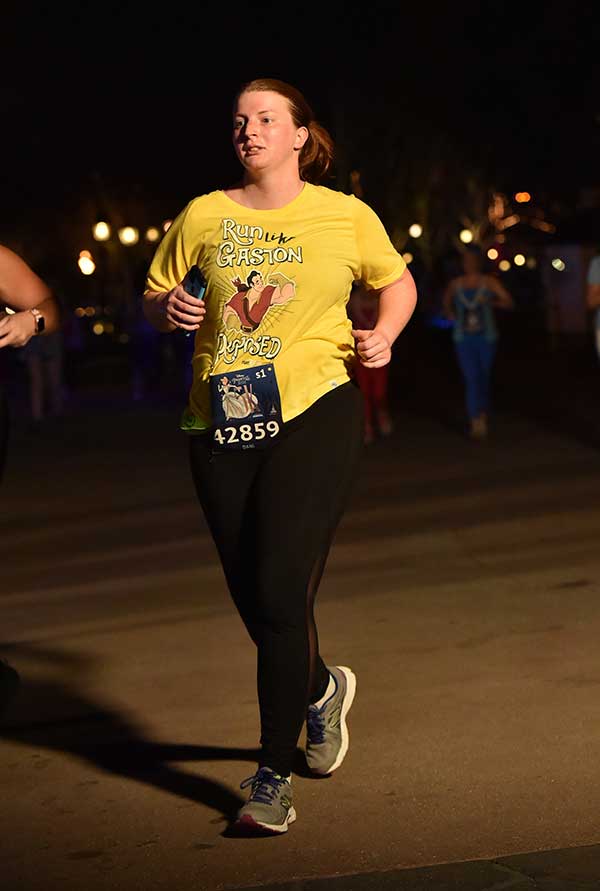 Speaking of photos, there are tons of PhotoPass photographers along the course to get you the ultimate action shot. If I saw them in time, I either tried to look very determined (and less like I just ran all the way around the world) or gave them a smile with arms stretched out. There are also the ones where I was clearly focused on putting one foot in front of the other (you know, the running photos that definitely won't be posted on Facebook). The photos are some of the best parts because you can show everyone and say, "Yes, I did that!" I recommend purchasing Memory Maker to get unlimited photos from runDisney and the rest of your Disney World trip.

Continuing on, Snow White and Rapunzel alternated in Germany before coming to our halfway point in The American Adventure Pavilion. This is also the one and only water station for the 5K (there are more available in the longer races). After Morocco, we actually ran through a backstage route behind France and then by International Gateway, rather than running straight through France and the United Kingdom. The course was slightly modified due to the construction near the front of EPCOT, so the brief detours helped get us the full 3.1 miles. "Ratatouille" was randomly playing on a projector behind France before heading back in the park for our next character stop. 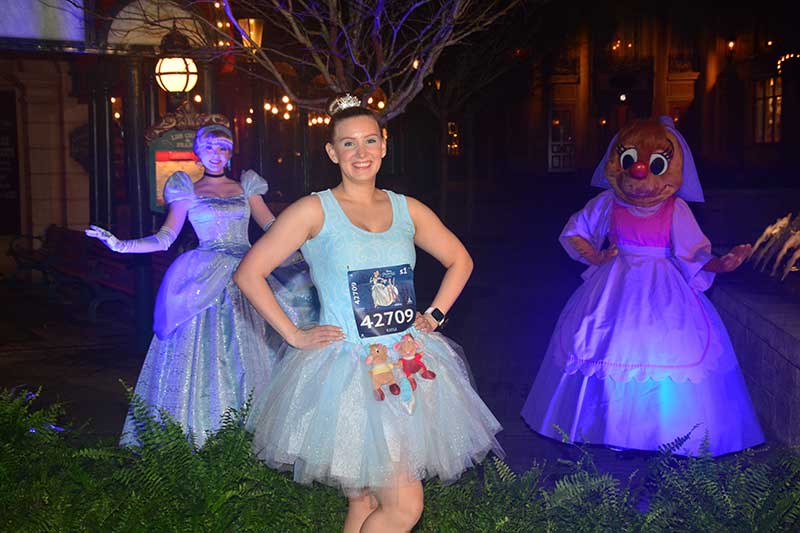 Being that Cinderella was hosting the 5K, we had to stop to see her and Perla the mouse in France. Lots of the royal runners had dressed as Cindy so this location was popular but moved very fast.

Having minimally trained, I surprisingly jogged most of the race as the energy made it go by fast. I walked for a bit after meeting Cinderella since my legs did not like stopping. Resuming my run, I passed Tiana and then later Joy from "Inside Out" as we turned left and headed toward Spaceship Earth. The final characters were Mickey and Donald dressed in rare musketeer outfits. Regrettably, I did not stop for this character spot. I considered it, but we were so close to the finish at this point that I wanted to have a solid power run to the end. I also had thought I heard someone say Minnie and Daisy would be at the end, so I figured I would get a photo with them. Unfrogtunately, they weren't actually meeting but were waving at the end from a raised platform, so no photo with them. 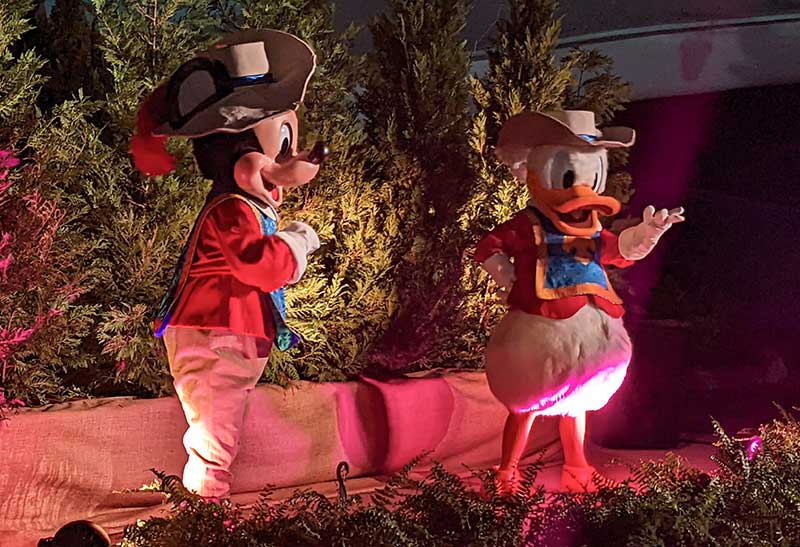 I bring this up merely to point out that you can't go back if you regret not stopping for a character. My advice is to wait for those characters if you are up for it. Unless you really want to get a certain time or just aren't up for stopping and starting up again, I say get those character photos. They make great memories to look back on. But if you don't want to wait in line for that long, consider taking a photo from afar (like me, because I just had to get a photo of them in their musketeer outfits!).

After crossing the finish line, it's time to get your coveted bling! You are handed a medal, bottled water and/or Powerade, and then a banana and snack pack. After that, stretch and make sure your legs are OK, get some last pics (the classic medal photo) and make your way back to your car (you remember where you parked, right?). Head back to your house or hotel and prepare for a well-earned nap!

Spectator's Guide to a runDisney Event 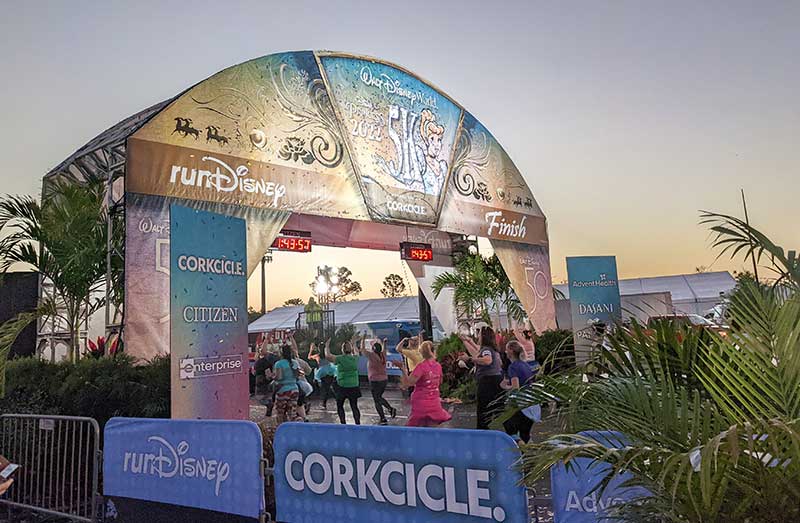 For those crazy enough to be at the parks before sunrise, but not crazy enough to be running (looking at you Leap ... ), support your favorite hoppin' frog as a spectator! It's great motivation to know that someone you care about is cheering you on. For some races, there's even live runner tracking available so you can be notified of where your runner is! Course maps are available ahead of time so you can plan out where you will watch. There will be set stops that people can watch from. Depending on the length of the race, there will be multiple spectator locations. For the half and full marathons, spectators can take the monorail between EPCOT and Magic Kingdom to see runners multiple times. Seeing all of the runners head down Main Street toward the castle is a magical experience in itself. Many people will create signs or even dress up to help cheer participants on.

Tips and Tricks for a runDisney Event 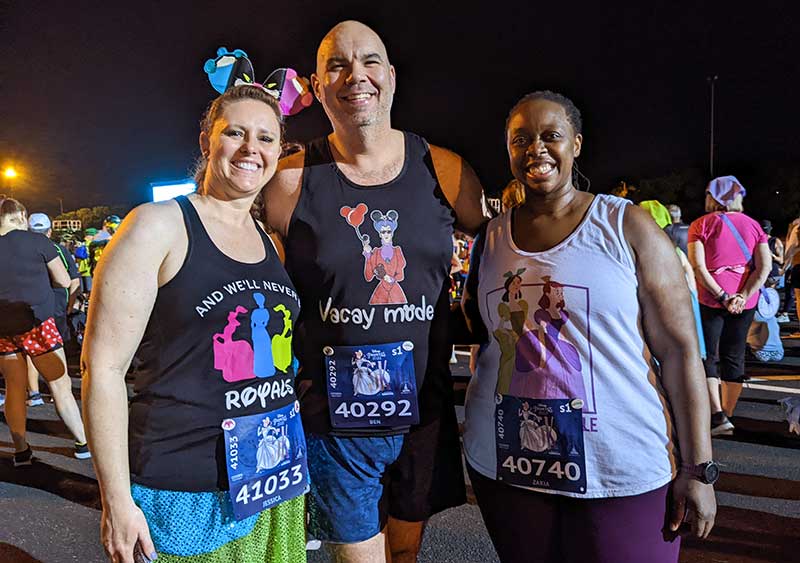 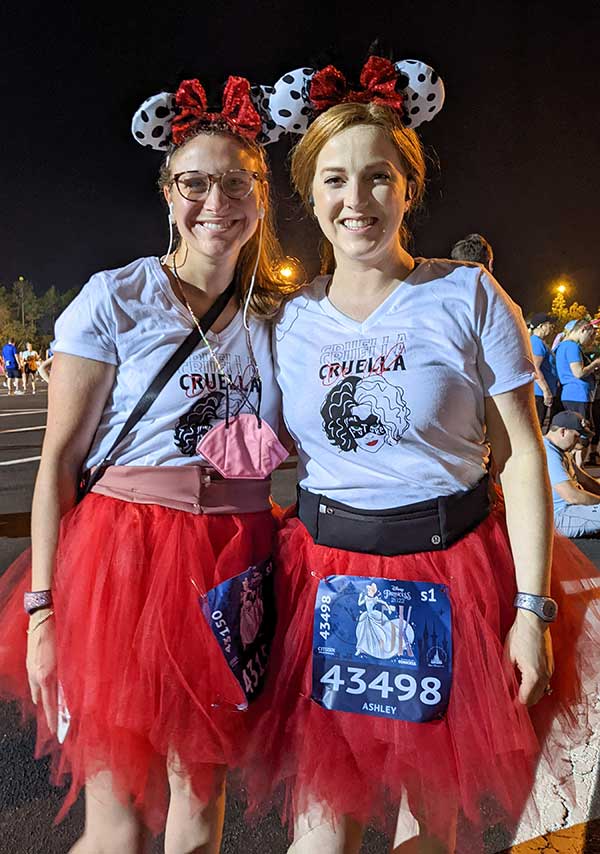 Have you ever participated in a runDisney race? Let us know in the comments below!

Related: The Full ~Frogtastic~ Schedule of Events at Disney World