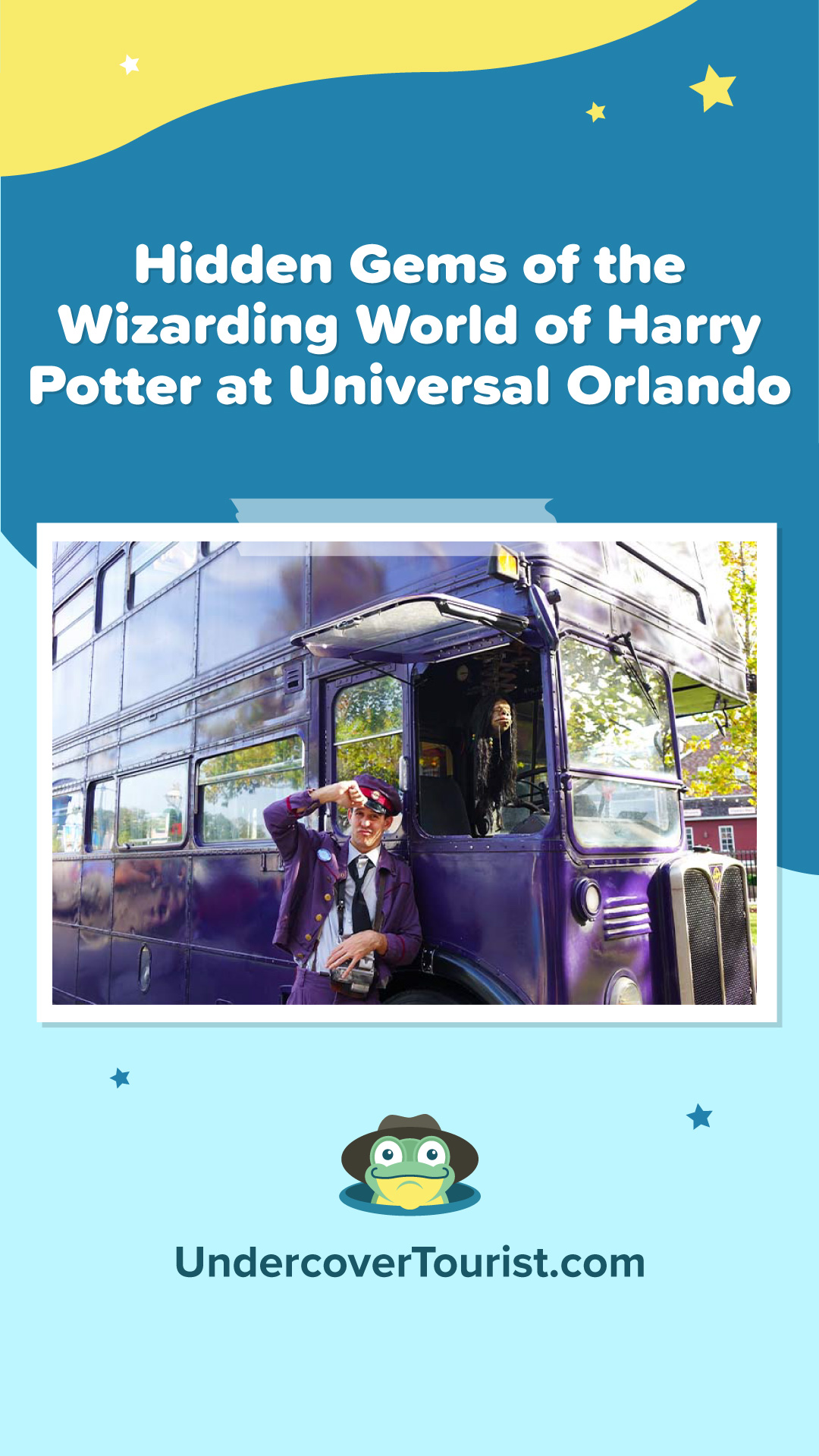 ‘Sup! Tad the Ravenclaw here, and I’m about to put my Hogwarts house trait of wisdom to the ultimate test. The Wizarding World of Harry Potter at Universal Orlando Resort is incredibly detailed, and it seems like every time I go, I find something that I had overlooked before. If you’re a mega "Harry Potter" fan like me, I’m sure you’ll appreciate the small nods and references to the books and films inside both Hogsmeade and Diagon Alley. All of these hidden gems in the Wizarding World of Harry Potter truly immerse you and bring that magical world to life!

Hidden Gems in the Wizarding World of Harry Potter at Hogsmeade

In the "Harry Potter" books and films, Moaning Myrtle is the ghost of a Hogwarts student who haunts the girls’ bathroom on the second floor of the castle. At the Wizarding World of Harry Potter, she has found her way to the “Public Conveniences” in Hogsmeade. Once you walk inside the bathroom, you’ll hear her lamenting about people making fun of her behind her back before inviting you to come back to visit. 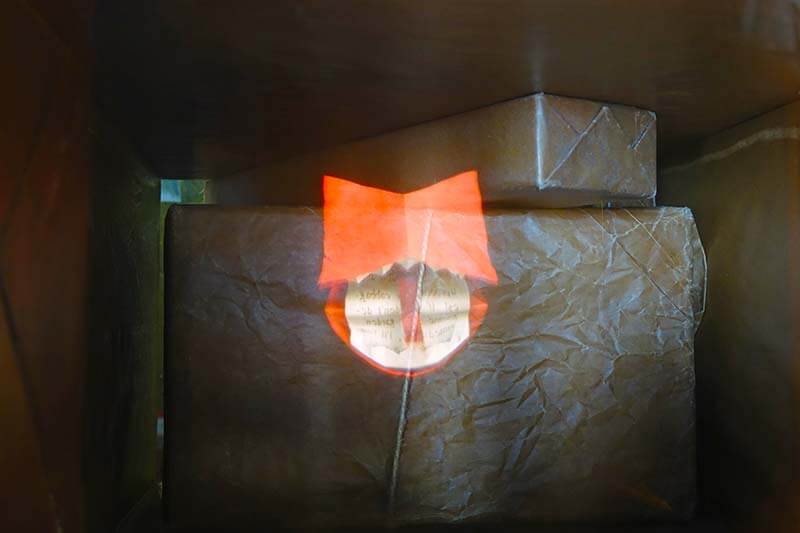 If there’s one thing you don’t want to receive from the Owl Post, it’s a Howler. For the muggles out there, a Howler is a magical letter that usually expresses anger or displeasure and enchants the written message into the writer’s voice at a high volume. If you go to the storefront window underneath the Owlery in Hogsmeade, there are a few different holographic Howler messages that play on a rotation. It’s amusing to hear the reasons why some Hogwarts students have gotten in trouble with their parents ... but it also makes me glad that Mommy Frog can’t send one to me! 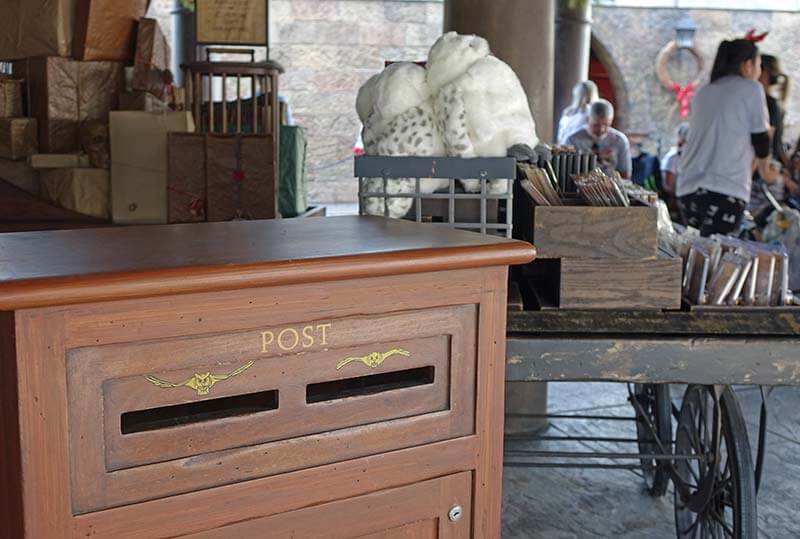 Speaking of the Owlery, you can actually send a postcard or letter through the Owl Post! You can buy official stationery and postage stamps inside the shop or bring an already stamped envelope. Be sure to leave room for the special Hogsmeade postmark. Then, it’s the owls’ job to deliver your mail back home or to family and friends.

While you’re at the Owlery, look up into the rafters to see the owls perched above. You’ll even spot some bird poop … like I said before, it’s all about the details! Also, keep an eye on the Owlery’s cuckoo clock tower. On the hour, it goes off and an owl pops out. 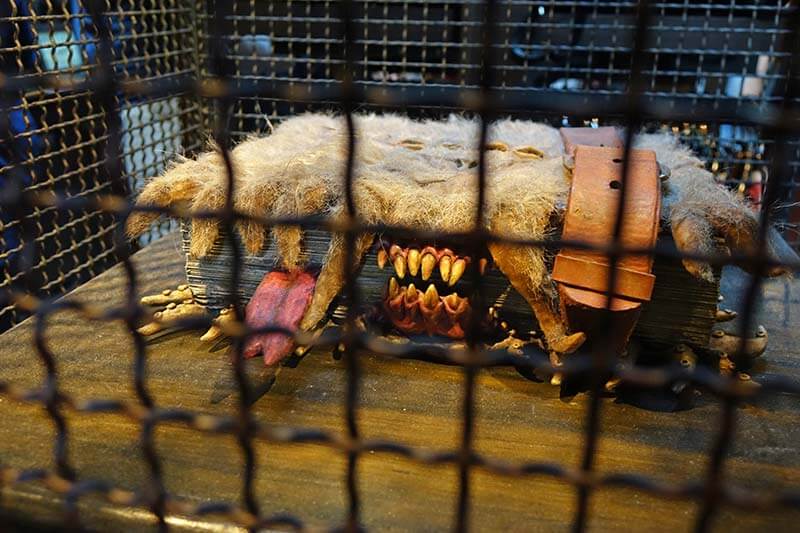 Remember when Hagrid assigned a textbook that would try to bite off the reader’s fingers for his Care of Magical Creatures class? (As one would imagine, it didn’t go well.) Stop by Dervish and Banges to see it snarling inside a cage. Just keep your fingers away!

If you like Herbology, you’ll appreciate these blink-or-miss-it references to mandrakes and gillyweed. In the queue for Harry Potter and the Forbidden Journey, you start outside in the greenhouse. Right as you’re about to enter the castle, there are a few growing mandrakes in pots. Thankfully, you won’t hear their fatal screams! But if you stop by the window of the Dogweed and Deathcap store, you can spot a moving mandrake, as well as a packet of gillyweed seeds. Harry Potter used gillyweed to help him breathe underwater during the second task of the Triwizard Tournament in "The Goblet of Fire." 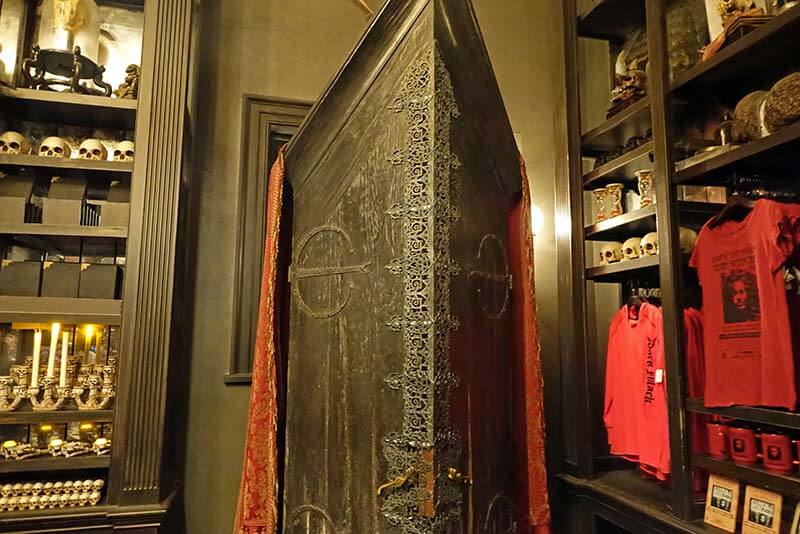 Take a trip down Knockturn Alley if you dare, and enter Borgin and Burkes, the shady store known for selling dark arts artifacts. This is where you can find Death Eater masks, skulls and costume replicas. For those with a sharp eye, don’t miss the Hand of Glory, as well as the cursed opal necklace given to Harry Potter’s quidditch teammate Katie Bell. Also, the Vanishing Cabinet sits in a corner by the registers. Listen closely to hear chirping from the bird that Draco Malfoy used as a test to sneak Death Eaters into Hogwarts. 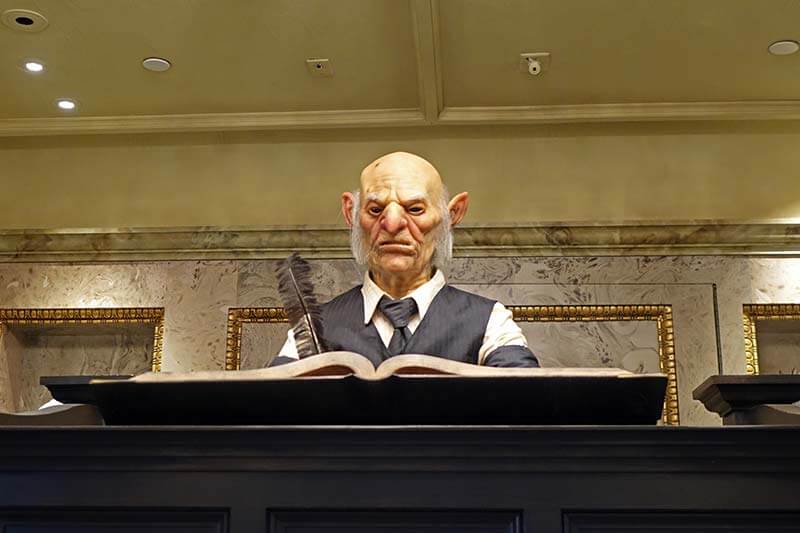 The Gringotts Money Exchange is exactly what it sounds like. Turn in your muggle money (U.S. currency) to receive special wizarding bank notes in $10 or $20 denominations. You can actually use these banknotes for purchases in Diagon Alley, Hogsmeade and select locations throughout Universal Orlando Resort. Super rad! Any unused wizard money can be changed back to U.S. currency at Guest Services. While you’re at the Gringotts Money Exchange, ask the goblin a question, and he’ll answer accordingly. I dare you to ask him, “Are you a house-elf?”

While it’s not the Mirror of Erised (that’s actually inside Hogwarts castle!), this magical mirror in Madam Malkin's Robes for All Occasions can talk. Stand in front of it, and it will comment on your outfit. One time it told me, “Merlin’s beard, you look amazing!” But don’t always expect a compliment. It can also be brutally honest. 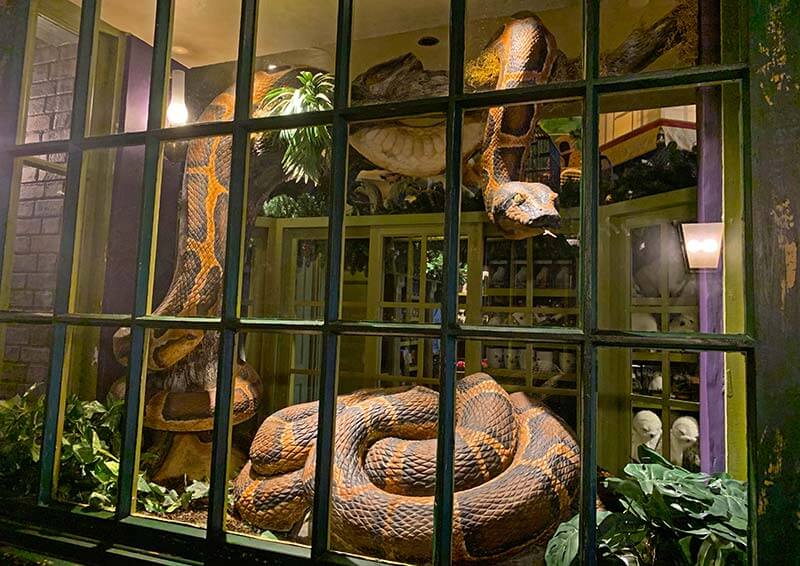 At the Magical Menagerie, stop by the window on the side of the building before you head inside the shop. There’s a giant snake that will speak Parseltongue to you. Unfortunately, I do not have that gift, but I always give it a try. Once you finish your conversation, find the purple crumple-horned snorkack inside the shop. You have to look up in order to spot the elusive creature. 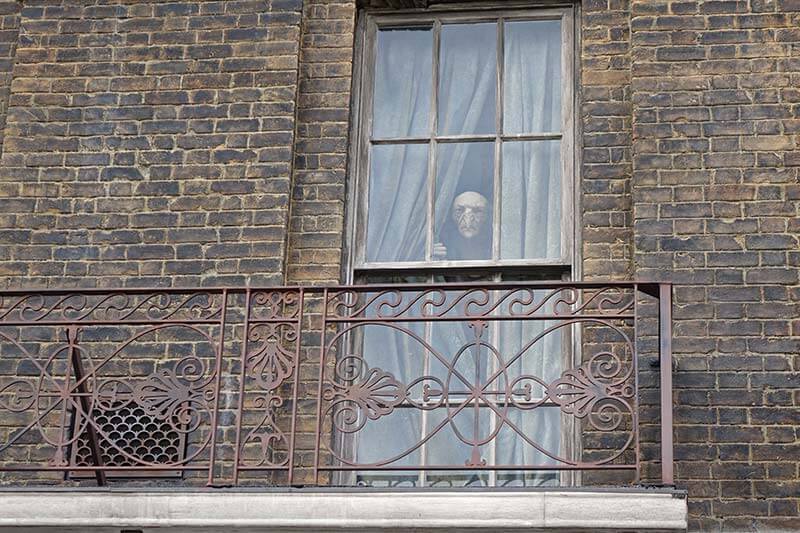 Outside of Diagon Alley in the London Waterfront area, there’s a row of houses on the opposite end from King’s Cross Station. Catch a glimpse of Kreacher, the Black family’s house-elf, in the second-floor window of 12 Grimmauld Place. He peers out from the curtains every few moments. It’s very subtle and quick (and a bit creepy, if I’m being honest). Unless you’re looking for the house-elf, you might pass by without even noticing him. 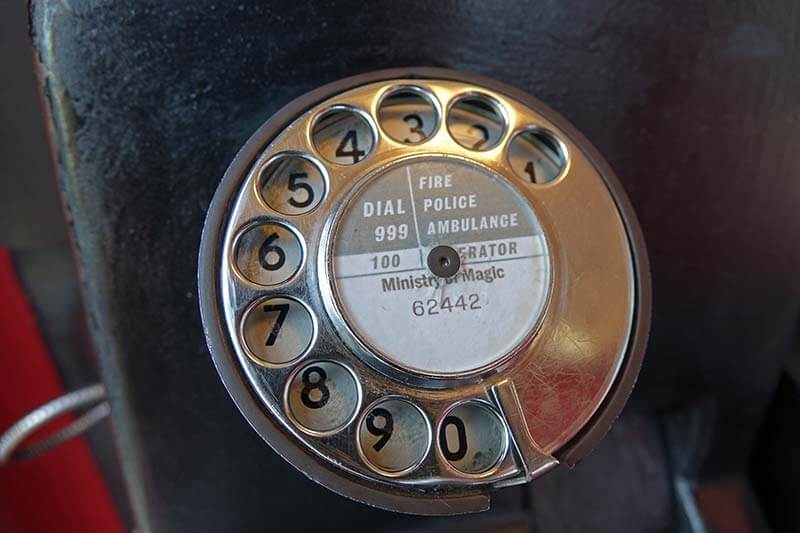 Yes, that bright red telephone booth makes the London area feel authentic, and yes, it’s a perfect Instagram photo-op. But most importantly, it serves as the guest entrance to the Ministry of Magic! Arthur Weasley took Harry Potter into the ministry this way in "The Order of the Phoenix." Pick up the phone and dial 62442 (or M-A-G-I-C). It’ll connect you to the Ministry of Magic, but unfortunately, you won’t be transported there. 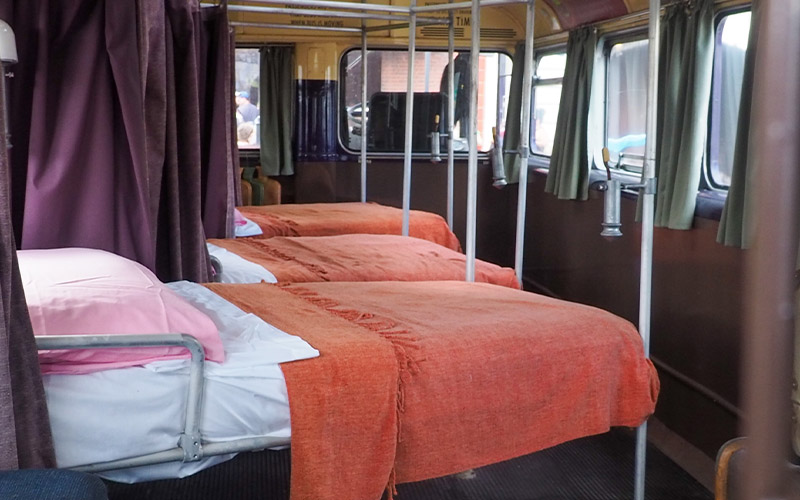 The Knight Bus itself isn’t exactly hidden, but I feel like it’s an underrated, must-do experience for "Harry Potter" fans. There aren’t many character interactions in the Wizarding World of Harry Potter, but this spot gives you an opportunity to chat with the conductor and the shrunken head. The hilarious duo banter with you and each other, and the conversation is different every time I stop by. While you can't board the bus, look through the windows to sneak a peek at the passenger beds and chandelier. There’s also a frogtastic photo-op on the stairs at the back of the bus.

What are some of your favorite hidden gems in the Wizarding World of Harry Potter at Universal Orlando Resort? Share any additional ones in the comments below!

Related: Guide to Dining in the Wizarding World of Harry Potter Universal Orlando