Behind the Scenes: The Magic Behind Our Steam Trains Tour at Disney World

Leap's Note: Today's post comes from Undercover Tourist customer and super Disney World fan Vern Woodruff. Vern has written about the Disney World character tips, princess dressing in the parks and the Bibbidi Bobbidi Boutique. Here he shares his experience with The Magic Behind Our Steam Trains Tour at Disney World.

My family had never taken any of the many “behind the scenes” tours offered at Disney World, but we decided to surprise our train-loving 11-year-old son with this special tour on our third visit. I accompanied him while my wife took our other two children to enjoy the shorter early morning attraction lines at Magic Kingdom. I’m here to share my experience with The Magic Behind Our Steam Trains tour at Walt Disney World to help you decide if it would be a good fit for your family.

This behind-the-scenes tour is offered almost every day. It is open to guests 10 or older at $54 plus tax per person in addition to the regular admission ticket you need for Magic Kingdom.  The tour meets at the entrance at 7:30 a.m. and lasts about 3 hours.  It is an outdoor tour, so be prepared for the weather and some walking. 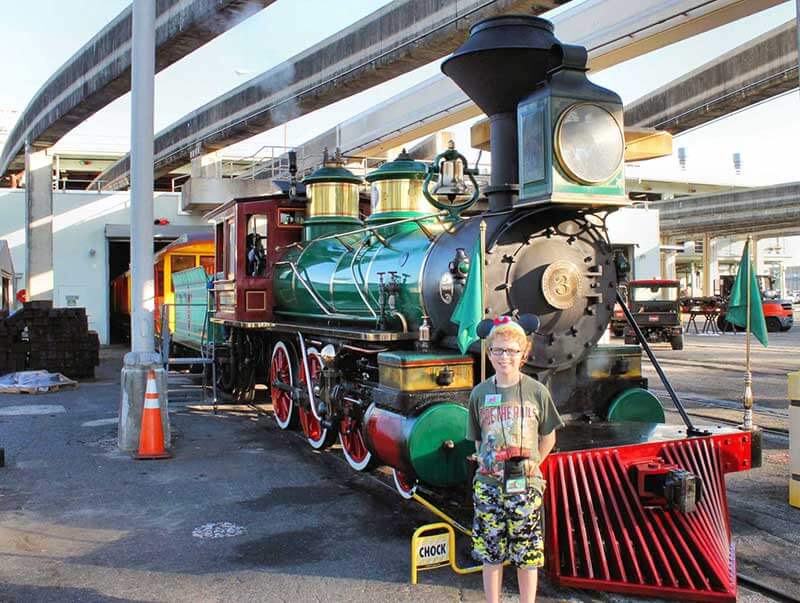 Because the Magic Behind Our Steam Trains Tour meets up so early, regular Walt Disney World transportation may not be operating quite yet. If you are on the tour, you can park at Disney's Contemporary Resort and then walk about 10 minutes to the Magic Kingdom entrance. We were planning on staying for the day, so my wife dropped us off in the Contemporary lot and then went to the main lot to park. My son and I arrived at the Magic Kingdom entrance at about 7 a.m. and were among the first through security. We gathered near the central floral display between the two sets of entrance gates. Once our cast member tour guide arrived, she checked our names off of a list and handed us special name badges and headphones. Once the tour group was assembled, we used our regular admission tickets to pass through the entrance and enter the Magic Kingdom. We had a few minutes to wait in the main plaza and were able to observe the park in a nearly empty state.

What to Expect from The Magic Behind Our Steam Trains Tour

The Magic Behind Our Steam Trains Tour’s first activity was to board the train for a ride back to the “roundhouse,” the garage and service area for the engines and cars.  The train was empty except for those of us on the tour. During the ride, our guide gave us information on the Walt Disney World Railroad. Near the back of the park, we took a junction that led back to the garage area. Once there, we were allowed off of the passenger car for a closer look at the engine and garage. While there, our guide took about four people at a time onto the engine for a look into the cab. She gave us more information on operating the engine and answered questions during our time there. 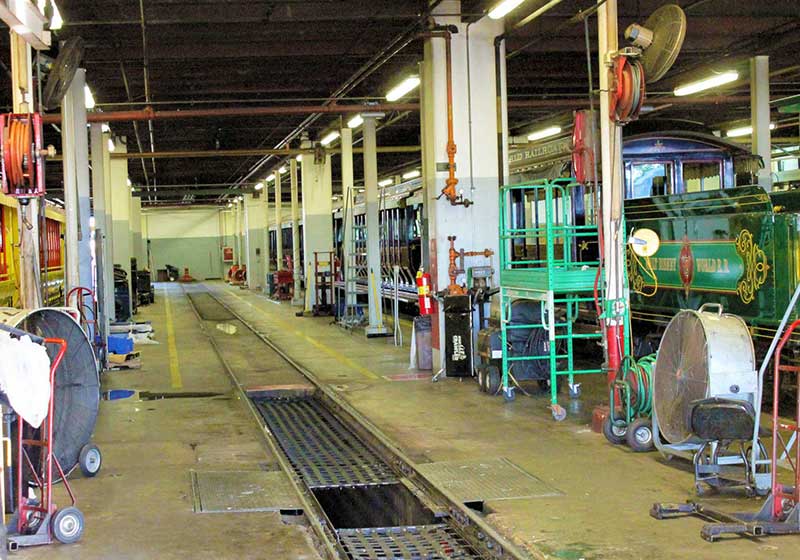 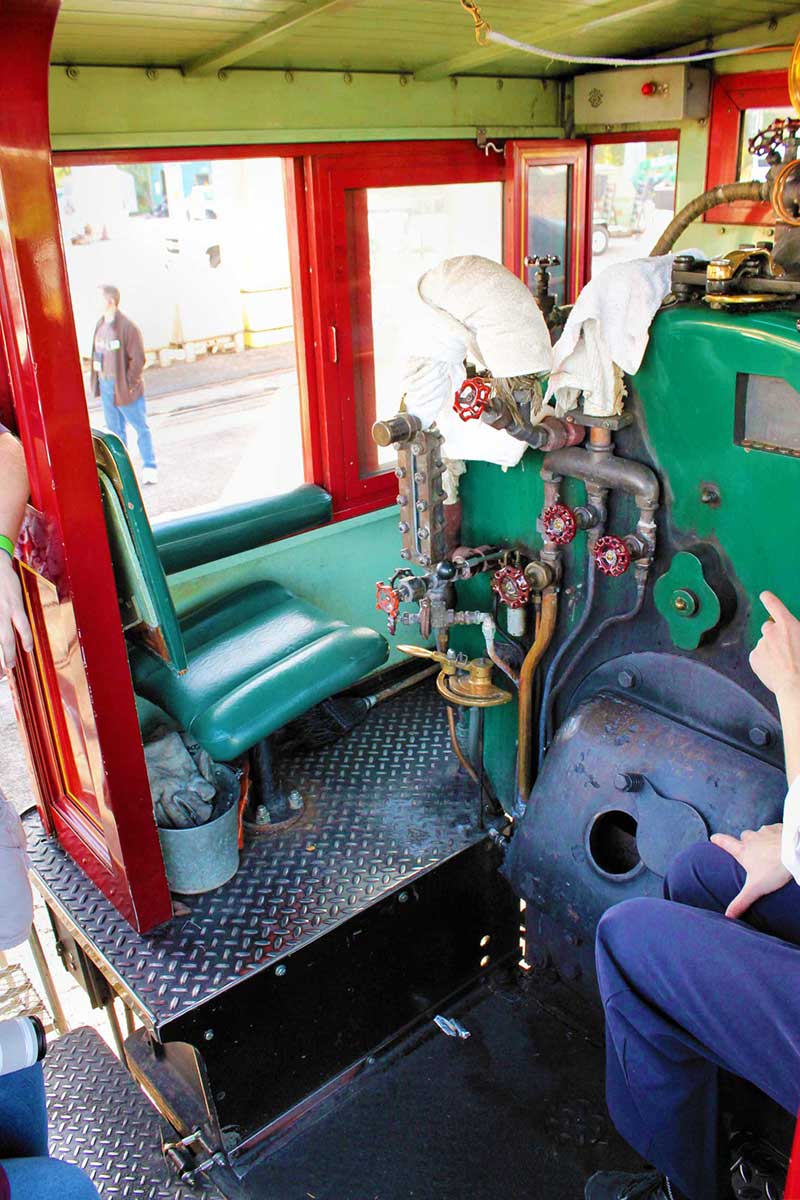 It was interesting to closely examine the engine and see the garage and service area. One item my son found neat was that the monorail garage was on a floor above the trains. There are four engines on the Walt Disney World railway: Walter E. Disney, Lilly Belle, Roy O. Disney and Roger E. Broggie. After everyone had seen the cab interior, an engineer showed us the process they use for lighting the firebox. While the engines were originally coal-fired, they are now equipped to run on diesel fuel. We reboarded the train to head back to Main Street station.

After arriving, we went to the Town Square Theater for a break and a bottle of water. We then went to a small courtyard next to the building for additional history on the railroad. Next, we went under the center area of the Main Street station where pictures of each engine were displayed while we received additional information. Lastly, we went upstairs in the station lobby and were seated while our guide went through a series of pictures on a flip chart showing Walt Disney with his trains. The presentation ended with our guide handing out special pins that are exclusively given to individuals that take this tour. My son collects Disney pins, so he was especially excited to receive it.

We enjoyed the Magic Behind Our Steam Trains Tour and would recommend it to anyone who has a great interest in steam engines and the Walt Disney World Railroad. If you’re a first time visitor, I recommend spending your day at Magic Kingdom tackling the usual activities and simply taking a ride on the train. If this peaks your interest, schedule The Magic Behind Our Steam Trains Tour for your next visit. The main downside to this tour is that you lose a couple of hours of early morning park touring when the lines are at their shortest.  However, my son greatly enjoyed going behind the scenes and was not disappointed that he missed a ride on the Seven Dwarfs Mine Train with a short wait that his siblings enjoyed.

What has been your favorite “behind the scenes” tour to experience at Disney World? Share it below! Ready to plan your Disney World vacation? Check out our Orlando planning timeline and tips!

Related: The Royal Treatment at the Bibbidi Bobbidi Boutique