Ready to hop back in time? That’s exactly what you’ll do when you stay at Disney’s Pop Century Resort, one of the most popular resorts at Walt Disney World! The resort's nostalgic theming highlights 20th century American pop culture, specifically from the 1950s to the 1990s. Older frogs will surely reminisce about their younger years, while the tadpoles can learn about historic pop culture moments and icons. Here's everything you need to know about staying at Disney’s Pop Century Resort! 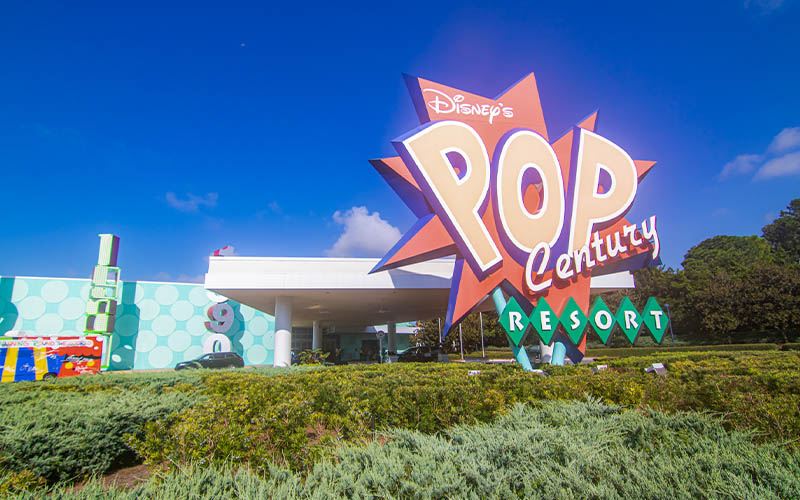 Because this fan-favorite resort thrives on history, we’ll give you a quick lesson about the origins of Pop Century. Disney initially planned the creation of “Legendary Years” and “Classic Years” areas, to divide the property by the first and second halves of the 20th century, respectively. Pop Century was constructed and completed first in 2003, along with plans for a second phase of the “Legendary Years,” representing the 1900s through the 1940s. The two sections were planned to be connected by the “Generation Gap” bridge. However, development for the second phase never followed through. Later, in 2010, Disney developed the unused land into another separate value resort, Disney’s Art of Animation Resort. The two resorts are connected by a bridge, which is now home to a shared Disney Skyliner station.

Each area of the resort is dedicated to its own decade, represented by giant items reflective of that time period — we love the giant foosball setup in the 70s area! At Classic Hall, you’ll find the main lobby and front desk, an arcade, the gift shop and the food court area. Bus transportation is located right outside of Classic Hall. Right now, guests are highly encouraged to use the Direct-to-Room service via mobile check-in through the My Disney Experience app. You’ll receive your room number through a text message once the room is ready, so you don’t even have to visit the front desk!

As one of Disney's value resorts, Disney’s Pop Century Resort offers the most affordable rates on property. (To save you some extra green, book your stay directly through us!) 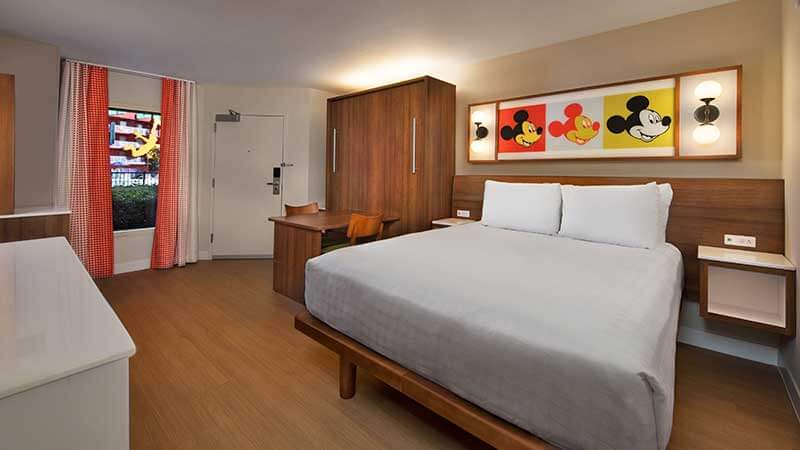 In 2018, all of the rooms at Disney’s Pop Century received a major update, which gave them a much more modern look. The refurbishment project replaced the carpet with laminate wood flooring, upgraded the double beds to queen-size beds and added a sliding door to the bathroom area. The color scheme is more subtle, featuring white and brown furniture with pops of color from the Mickey and Pluto art above the beds and the window curtains.

To maximize space, the second bed is a pull-down Murphy bed unit that doubles as a table when folded up. There’s more storage space, including a wider dresser under the television and extra room for luggage under the bed. There's also plenty of room to slide empty luggage under the bed. A cabinet storing the coffee maker with supplies and a fancy glass-door mini fridge (which makes it easier to keep track of our leftovers!) sits in the corner of the room. 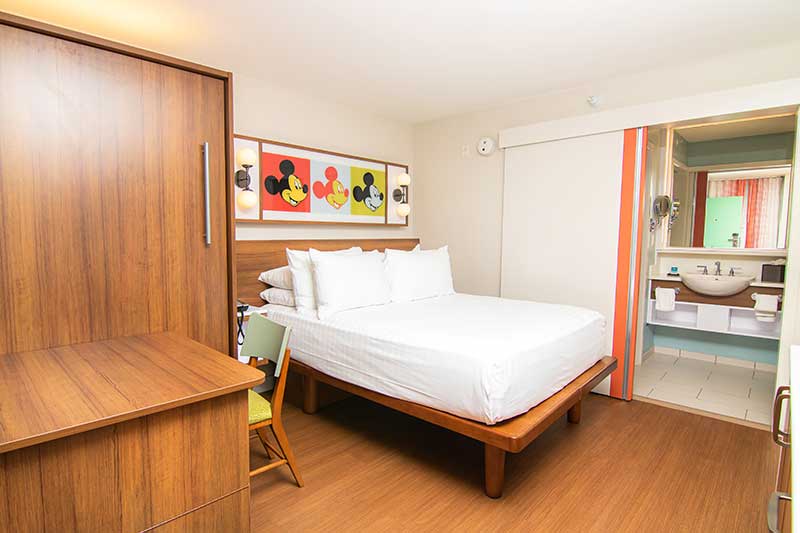 Instead of a curtain, the bathroom and dressing area has a sliding door that divides the vanity and closet space from the rest of the room. The toilet and shower are also separated by another sliding door, which is useful if one person wants to shower while another uses the sink or gets dressed. The vanity has more counter space and additional shelving underneath than it did prior to its remodel.

Pop Century’s standard rooms come with a TV, free Wi-Fi, a hair dryer, in-room safe, coffee maker, iron and ironing board, mini-refrigerator and a telephone. Views may include either the hotel buildings or parking areas. If you want views of the Bowling Pool or the Computer Pool, opt for the “Standard Pool View.” You also have the option to choose a “Preferred Room,” which is close in proximity to Classic Hall and transportation. “Preferred Pool View” provides views of the Hippy Dippy Pool. 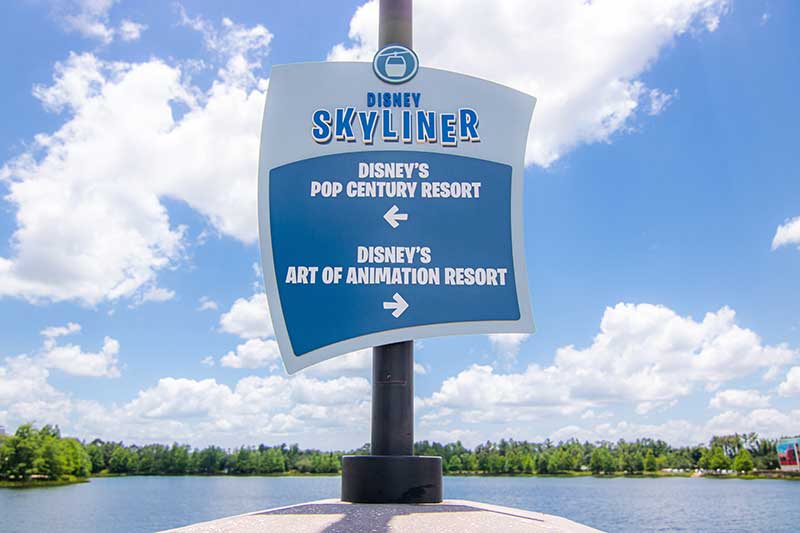 Pop Century guests have relied solely on bus transportation — until fall 2019 with the debut of the Disney Skyliner. Pop Century shares a Disney Skyliner station with Disney’s Art of Animation Resort. Take a ride in one of the colorful Skyliner gondolas over Hourglass Lake to the Caribbean Beach station. At Caribbean Beach’s main hub area, you’ll transfer lines (much like the monorail lines at the Transportation and Ticket Center) to head directly to Disney’s Hollywood Studios or EPCOT. The EPCOT line has a quick stop at Disney’s Riviera Resort station, but you do not have to get out and transfer gondolas.

Operating hours vary depending on park hours, though you can usually expect Skyliner to be running about an hour before park open and an hour and a half after park close. There are no buses to EPCOT or Hollywood Studios, except for any time when Skyliner is not operating (often due to weather). If anyone in your party is afraid of heights or has claustrophobia or severe motion sickness, we suggest using a ride share service or renting a car.

If you’re going to Disney’s Animal Kingdom, Magic Kingdom, the water parks, Disney Springs or any other location on Disney World property, you’ll need to take a bus. To avoid long lines, travel during a non-peak time, or consider driving yourself (whether it’s your own car or a rental car) or using a ride-sharing service. 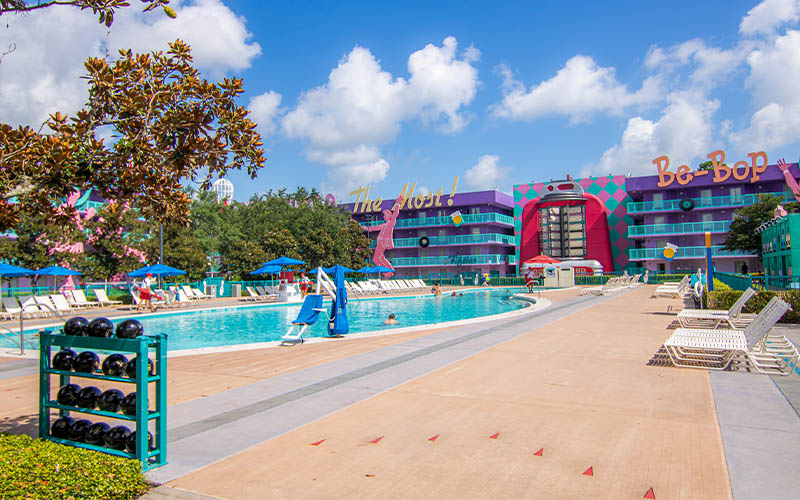 Enjoy a splash from the past at one of the three themed swimming pools. In keeping with Pop Century’s generational theming, each one celebrates a different decade. As the largest pool, and the closest to Classic Hall, the Hippy Dippy Pool features flower-shaped water jets and a groovy vibe. Smaller tadpoles can chill out at the adjacent kiddie pool. On select nights, watch a Disney movie screening as part of Movies Under the Stars at the Hippy Dippy Pool. Travel back in time to the 1950s at the Bowling Pool, which is shaped like a bowling pin, or the 1990s at the Computer Pool, which includes a giant floppy disc and keypad (we had fun trying to explain a floppy disc to Tad!). Complimentary towels are provided at all pools. 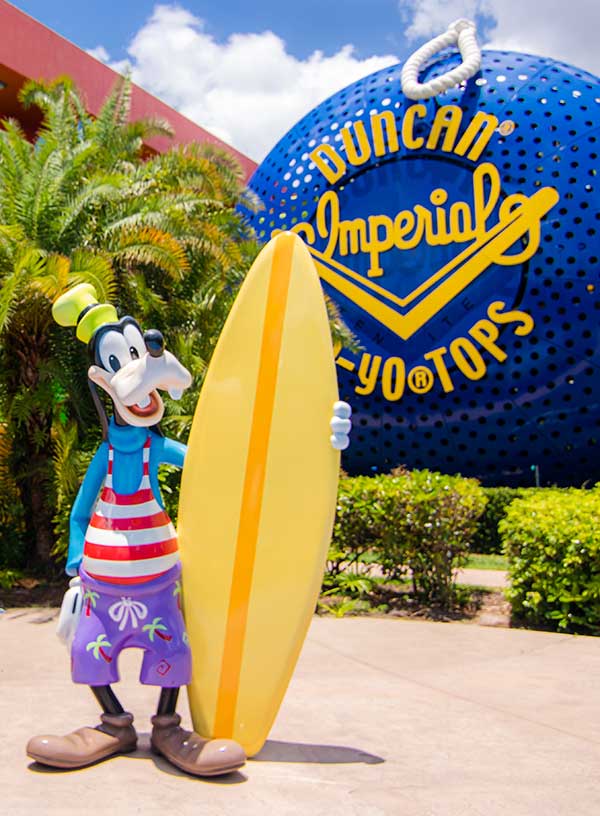 Take a brisk walk or run around the resort’s one-mile jogging trail. If you’re into pop culture fun facts, be sure to stop and read the signs along the pathway for some trivia. There is a playground located in the 70s area, so tadpoles can get their extra energy out. Families will love competing against each other as they play old and new video games at the Fast Forward Arcade in Classic Hall.

Like other Walt Disney World Resort hotels, Pop Century offers Early Theme Park Entry. Early Entry is offered for 30 minutes before park opening at every park, every day! You also receive early access to individual Lightning Lane selections through the new Disney Genie+ service. With the new individual Lightning Lanes for purchase, hotel guests are able to begin booking at 7 a.m., while general admission must wait until the park opens. This can be a crucial jump for popular rides such as Guardians of the Galaxy: Cosmic Rewind or Star Wars: Rise of the Resistance. Be sure to link your hotel reservation to your My Disney Experience account to take advantage of these benefits. (See all the benefits of staying on-site in our full blog post). 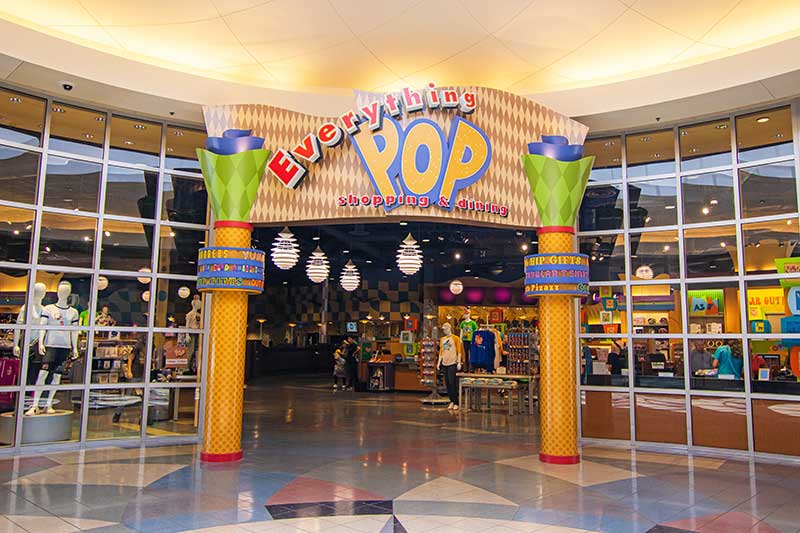 Everything POP Shopping & Dining is your one-stop location for souvenirs and food! Located at Classic Hall, you’ll first step inside the gift store, which has all kinds of souvenirs from apparel to coffee mugs. You can also purchase vacation essentials, such as sunscreen, toiletries and over-the-counter medication, in case you frogot to bring some from home.

Beyond the shopping area, you’ll find the food court and dining area. Everything POP is the only dining option at the hotel, but it offers a variety of burgers, pizzas and pastas (during lunch and dinner hours), as well as breakfast platters. If you follow a plant-based diet, there are a few yummy dishes available, including plant-based character waffles, plant-based Mickey frittatas and Impossible burgers. Frog families may want to opt for the large cheese or pepperoni pizza which are both under $20. Room left for dessert? Try some of the specialty cupcakes or other exclusive sweet treats! 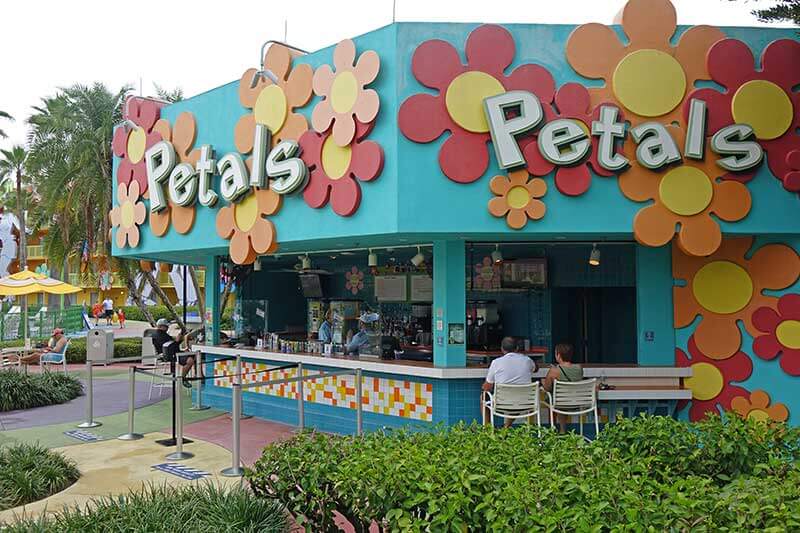 For all you momma and poppa frogs, grab a groovy drink from Petals Pool Bar as you relax by the Hippy Dippy pool. Try a specialty cocktail, such as the Banana Cabana or Sunshine Margarita, sip on sangria or choose your favorite beer, cider or hard seltzer. The tadpoles aren’t toadally left out — they can indulge in a smoothie or ice-cold lemonade!

If you’re in need of a change in scenery or want other options, you can easily walk over to Disney’s Art of Animation Resort’s food court. It has similar menu items, but it offers unique dishes, as well. You’re also a Skyliner ride away from Disney’s Caribbean Beach Resort and Disney’s Riviera Resort.

What to Consider Before Staying at Disney’s Pop Century Resort 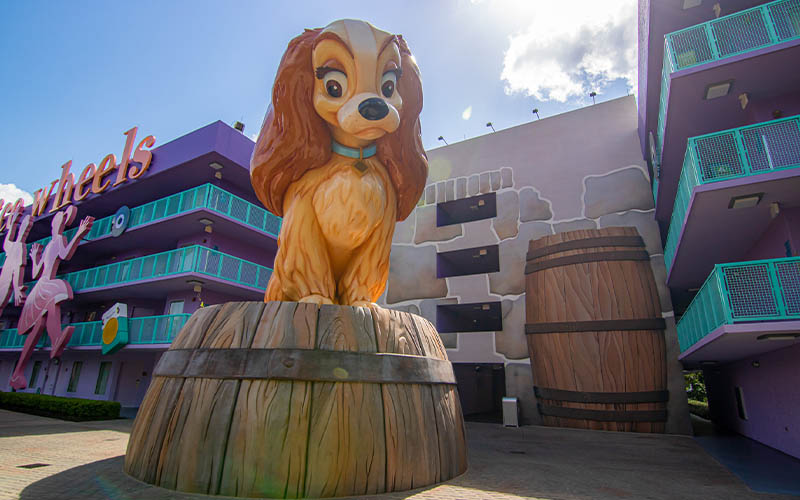 We love the theming of Disney’s Pop Century, as it often strikes up an interesting conversation with the tadpoles who ask, “What is that?” Leap and I get to reflect on memories from the past, while we create new ones with Tad and Lily. It’s a great resort for families because of its reasonable rates and easy access to the Disney Skyliner.

The rooms are small at 260 square feet, but the recent refurbishment has opened up more space with the Murphy bed unit and adding more storage and shelving. You don't even have to worry about the size if you're planning to spend most of your time at the theme parks. Guests have found the bus transportation to be challenging and busy, so it’s better to use Skyliner (if going to Hollywood Studios or EPCOT) or avoid peak travel times. The food court has a lot of options to rotate through, but you may find that only having one restaurant is limiting (though keep in mind that Disney's Art of Animation is only a jump away). 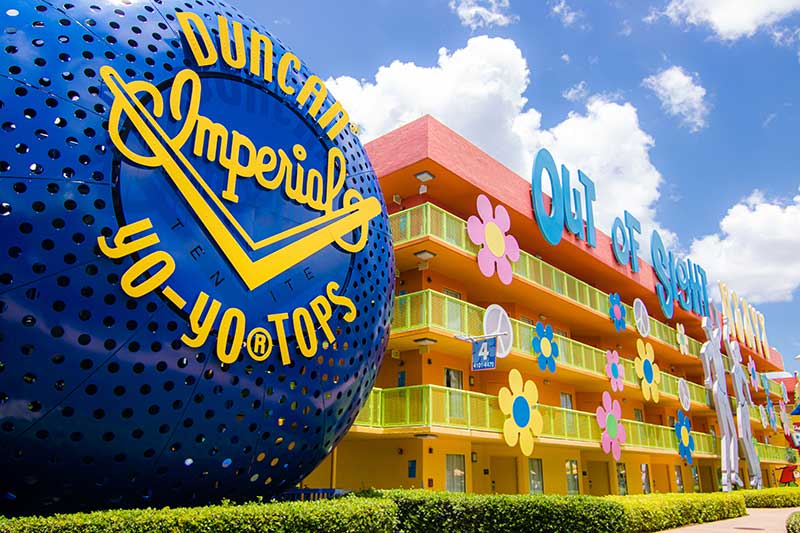 Pop Century is one of the most popular resorts at Disney World and one of our personal favorites. While Disney's Art of Animation has an edge over Pop, thanks to its family suites and zero-entry Big Blue Pool, we recommend it over the All-Star value resorts. Here are the big reasons we love Pop:

Have you ever stayed at Disney's Pop Century Resort? Share your favorite vacation memory from this groovy hotel. Or perhaps you've got an upcoming stay ... tell us what you're most looking forward to!