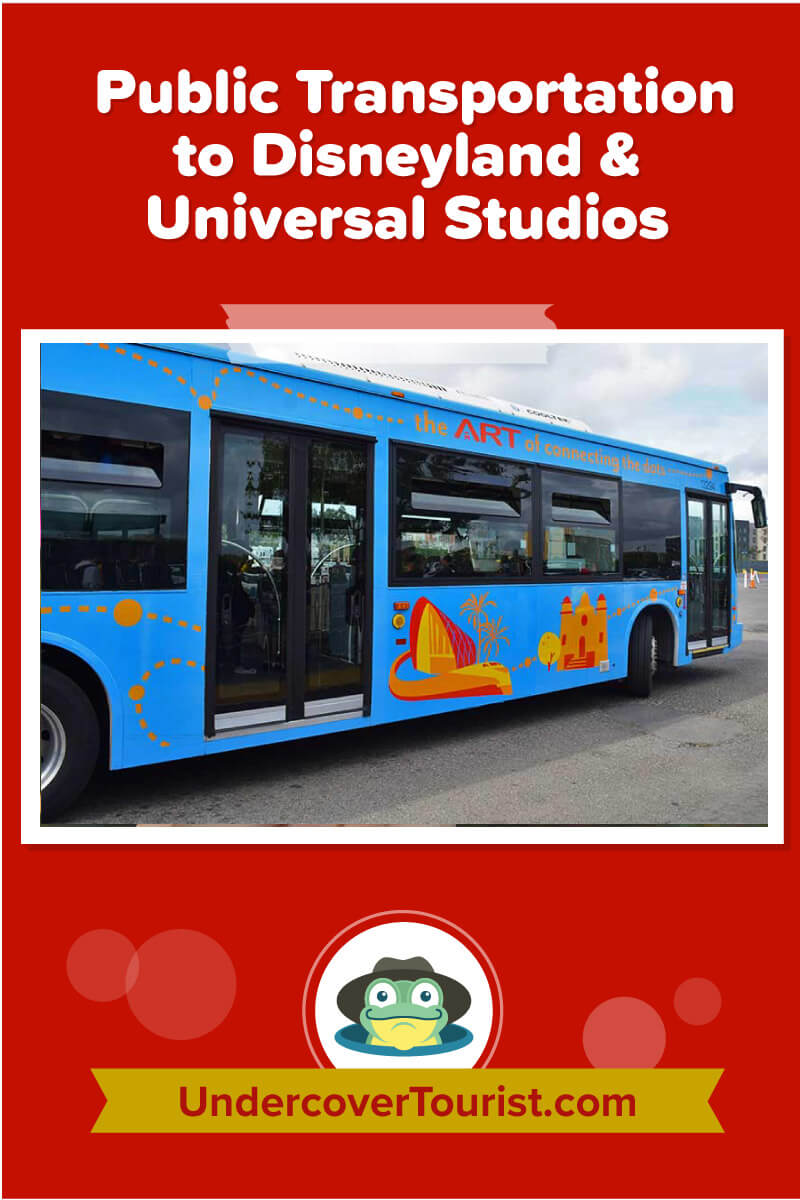 The people of Southern California have a love affair with their cars. They love the freedom and control that driving gives them, but with a dense local population, all of those cars on the roads can lead to terrible traffic. When you are on vacation, you want to relax like you’re chilling on a lily pad, floating downstream and watching the scenery pass by. Doesn’t that sound better than feeling like Frogger while dodging brake lights on unfamiliar freeways? If traffic and parking stresses you out, then taking public transportation to Disneyland and Universal Studios Hollywood might put you in a hoppier state of mind. Public transportation may not be the fastest option, but it can relieve stress if driving in LA traffic makes you nervous. 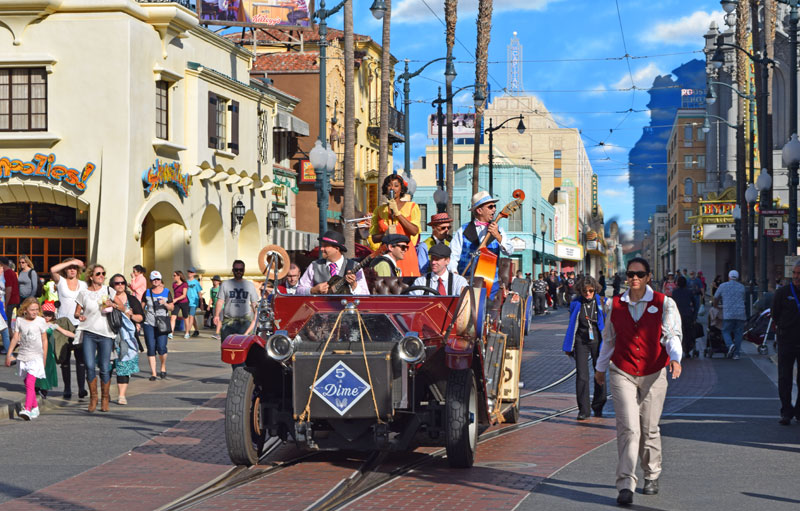 We frogs have been getting a lot of questions from our readers on alternative ways to get to Disneyland or Universal Studios Hollywood, so we hopped on the trains and did the research for you. It turns out it’s easier and less stressful than we thought! Some of these methods will save you some green compared to paying for gas and parking (which keeps going up in price). We've even scouted out a nearby park and ride where you can park and take a bus to Disneyland to save on parking! We love saving money, and we bet you do too! Here’s how to hop on public transportation to Disneyland and Universal Studios Hollywood.

Taking Public Transportation to and from Disneyland and Universal Studios Hollywood

All Aboard! Taking the Train to Disneyland 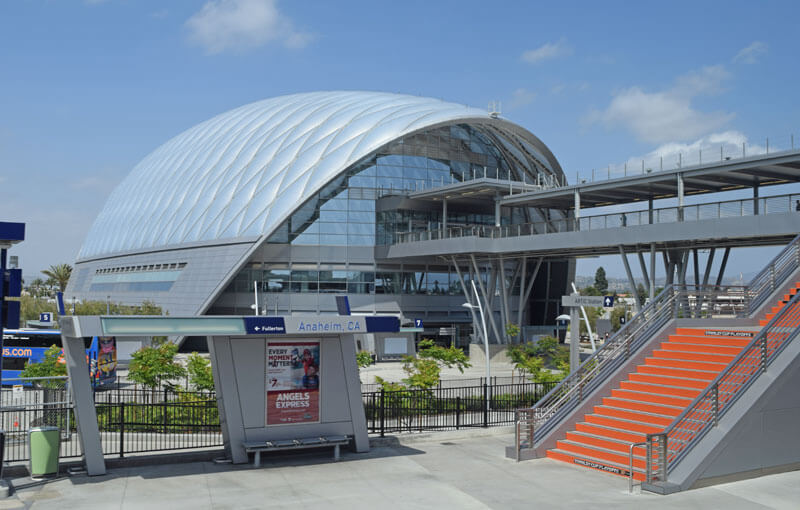 Whether you are coming from Los Angeles, South Orange County, North San Diego or Riverside/San Bernardino, you can jump on the train to the Anaheim Regional Transportation Intermodal Center (ARTIC). This giant dome of a building is located within walking distance of both Angels Stadium and The Honda Center (where the Ducks play). Kids love trains, so the ride to Disneyland just might be equally exciting as visiting Disneyland itself!

The Amtrak Pacific Surfliner offers daily service between San Diego, Orange, Los Angeles, Ventura, Santa Barbara and San Luis Obispo counties. Both Pacific Surfliner and Metrolink train tickets will get you a free shuttle from ARTIC on Route 15. Right now the normal routes are not running. Instead use On-Demand with the TripShot app. Hop down to "On-Demand Bus Service" for the deets. Your bus ticket is free if you took the train. (An Uber or Lyft runs about $6 each way between ARTIC and Disneyland.)

During a more normal time, here's what to do: To take the shuttle after exiting the train, use the elevator or stairs to cross the bridge from the platform to the station. Exit on the right side of the station, which is the same side as the Amtrak ticket window. Head to Bus Bay 12 to hop on the Anaheim Resort Transit to Disneyland. Route 15 operates every 20 minutes, and the bus trip takes about 30 minutes. The bus will drop you off just outside of the security checkpoint off of Harbor Boulevard. Route 14 also takes guests to Disneyland Resort.

Shuttles follow Disneyland hours, so they start usually an hour before park opening, and the last shuttles leave about 20 minutes after park closing. Keep in mind that in comparison, during busy times, it can easily take as long, or even longer, to park at Disneyland Resort and wait for a resort shuttle, so you might be able to maximize your time if you don’t drive to the resort. To head back to the station, walk back to the transportation area and wait at #15 to take Route 15 back to the station. Be sure to show your train ticket.

How much does this cost? An adult weekday roundtrip Metrolink or Amtrak ticket varies based on day and distance. The bus fare is $6 per adult and $2.50 per child/senior/disabled for all-day passes. Prices of all tickets are subject to change. There is free parking at ARTIC, so you can also park there and take the shuttle. In comparison to driving yourself, parking at Disneyland costs $30 per day plus gas. 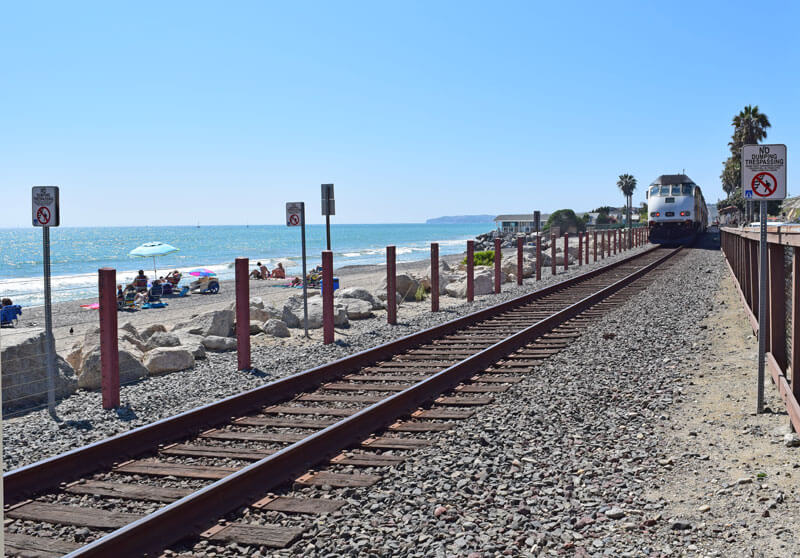 There are many great day trips you can make using the trains. You can travel up to Union Station in LA, which is located near Olvera Street Historic District. You can also take the train for day trips down to south Orange County to historic San Juan Capistrano (home of the Mission and petting zoo) or San Clemente (one of the best beach towns with great walking trails along the beach, dining, shopping and a pier).

Hopping on the Bus to Disneyland 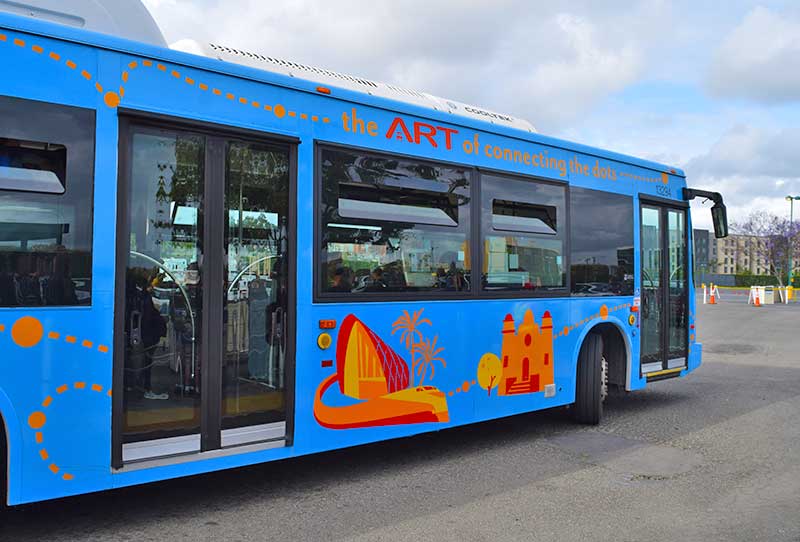 Keep in mind that if you are staying in Anaheim, you can use the buses to get around. Some off-site hotels offer free shuttles to Disneyland, and some offer transportation for a fee via the Token Transit app. There are bus stops outside many Anaheim hotels, so you can simply hop on buses from your hotel to Disneyland to avoid the hassle of parking. Tell the tadpoles it's their first ride of the day! You can book a ride on-demand via the TripShot app.

There is a new On-Demand system for riding the bus, even from ARTIC (if you use the free parking or take the train to ARTIC). The cost is $6 for a day pass or $4 per trip. You'll need to download the TripShot app. You can purchase your bus pass via the Token Transit app. Here's how to use TripShot:

If you are coming from further inland, such as Riverside and San Bernardino, you can take the Commuterlink Express Bus 200 for just $3.50 each way ($2.75 for seniors, those with disabilities and veterans) and get dropped off just outside of security. Schedules are modified from pre-pandemic times. The bus starts at 6 a.m. weekdays and weekends. (The early frogs get the flies, we always say. And at Disneyland, the "flies" hoppen to be arriving for Magic Morning or rope drop.)

The last bus leaves Anaheim at 10:20 p.m. weekdays and 10:15 p.m. weekends. (Times subject to change.) The route pick-up and drop-off locations include:

Parking Off-Site and Taking the Bus to Disneyland

Another way to avoid paying to park at Disneyland is to park and take a bus. Some Disney fans suggest parking at the Fullerton Park and Ride, where it's free to park. Hop on the LA Metro 460, which runs every 20 minutes. It's a 10-minute ride and costs about $1.75 (subject to change).

You can park at ARTIC for free and use the on-demand bus or just get an Uber for about $6 each way.

Getting to Universal Studios Hollywood 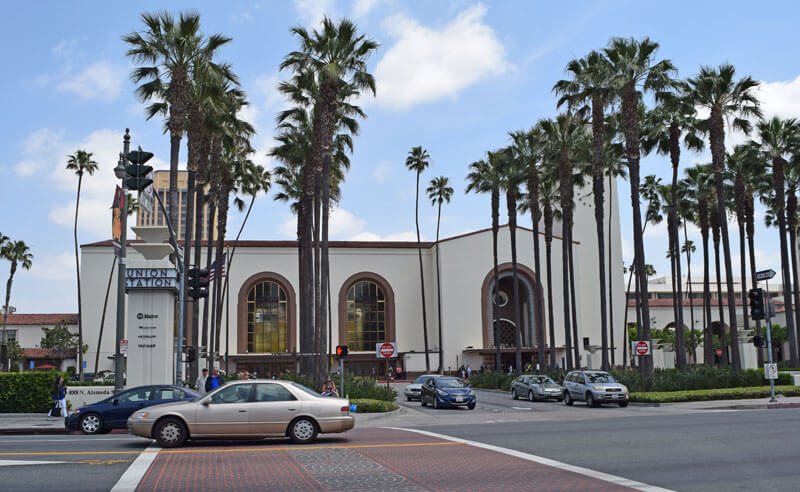 It may not be the Hogwarts Express, but you CAN take a train to Universal Studios from Union Station In LA. From Union Station (which has trains coming to it from all directions in the surrounding areas via Amtrak and Metrolink), you can use your Metrolink ticket to transfer to the Red Line Metro Rail subway. Travel on the Red Line Westbound the direction of North Hollywood, and exit at Universal City/Studio City. There, you will find a free shuttle that will take you right to the front gate of Universal Studios Hollywood. The shuttle runs every 10 to 15 minutes, seven days a week, from 7 a.m. until two hours after park closing. 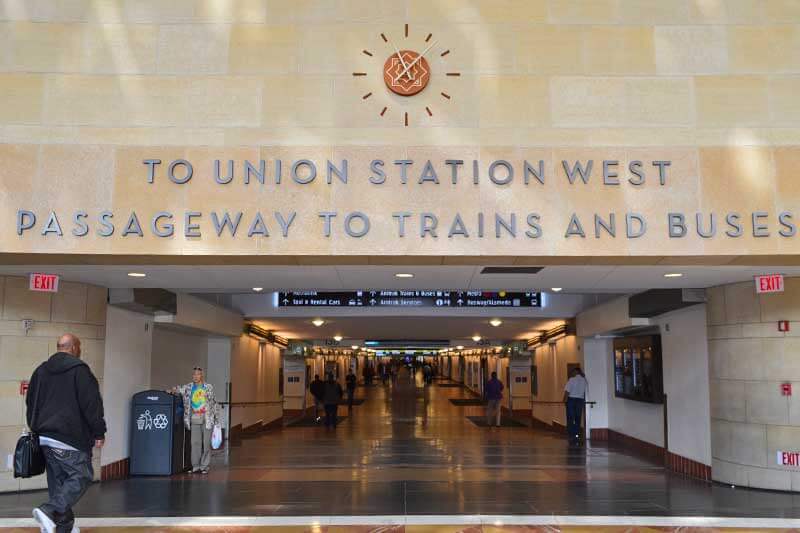 Note that if you are already in the LA area, you can probably buy the Metro Rail tickets for much less if you do not need to use Metrolink to get to Union Station. Use the Metro Trip Planner to plan your trip. Check your dates before your trip just to be sure there aren’t any closures or changes. 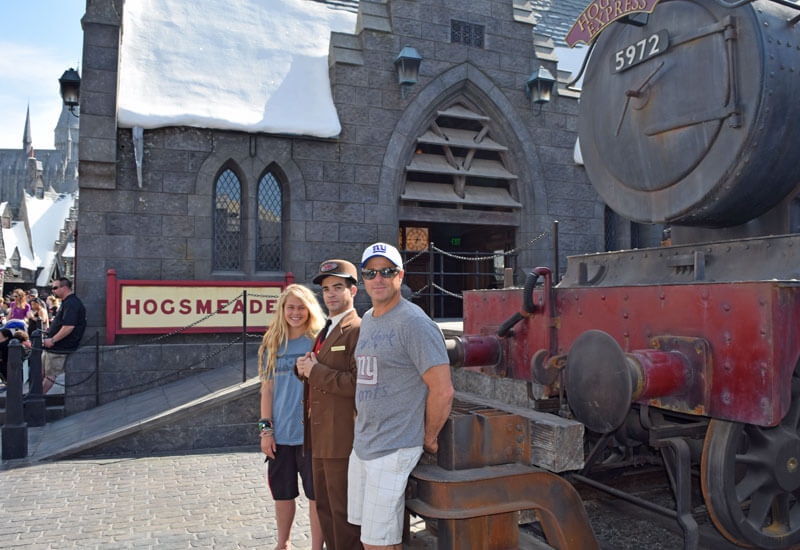 We recommend buying your Universal Studios Hollywood tickets in advance since they are much more expensive at the gate. Our tickets can save a lot of green compared to the Front Gate ticket window prices (depending on when you want to visit). If you are taking Harry Potter fans to the Wizarding World, you can pretend that the train really is the Hogwarts Express. That’s the best we can offer since you can’t arrive by broomstick, Floo powder, portkey or by disapparating. But if we figure out how to arrive by magic, we’ll let you know!

Here are some Metro tips worth noting: The Metrolink tickets are also good for Metro buses. Also, there is a new Metro rail line that takes riders to Santa Monica! Santa Monica is home to the iconic pier and beautiful beach.

There are a number of companies that offer transportation and tours between LA and Orange County. Some of them take you from your hotel in Anaheim to Universal Studios Hollywood and include a bus tour of Hollywood. You will have to shop around for the best deal, but a family of four can expect to pay about $120 to $200 for this service, and much more if it includes theme park tickets. You might have to weigh the cost of taking the train or simply renting a car and parking. Parking at Universal costs $28 per car (more if you choose closer parking).

If you are flying in and need transportation, you might consider the nonstop LAX FlyAway buses. They can get you from the airport to Union Station and locations throughout the city, including Hollywood, inexpensively. From those locations, you can hop on the Red Line to Universal City.

You have to weigh in your family’s ages, time schedule, interests and budget to find the right form of transportation for you. For some people, being able to relax on a train or bus rather than navigating traffic and unfamiliar freeways (which can stretch up to seven lanes wide in some spots yet shrink down to one lane in others) is priceless. Others may want to come and go on their own without adhering to a schedule. No matter which mode of transportation you choose, your final destination is sure to be a frogtastic time!

We are hoppy to present the various options in travel planning so you can find the plan that works best for you and your family. Have a question about public transportation to Disneyland and Universal Studios Hollywood? Share it in the comments below.

Related: Transportation To and Around Los Angeles