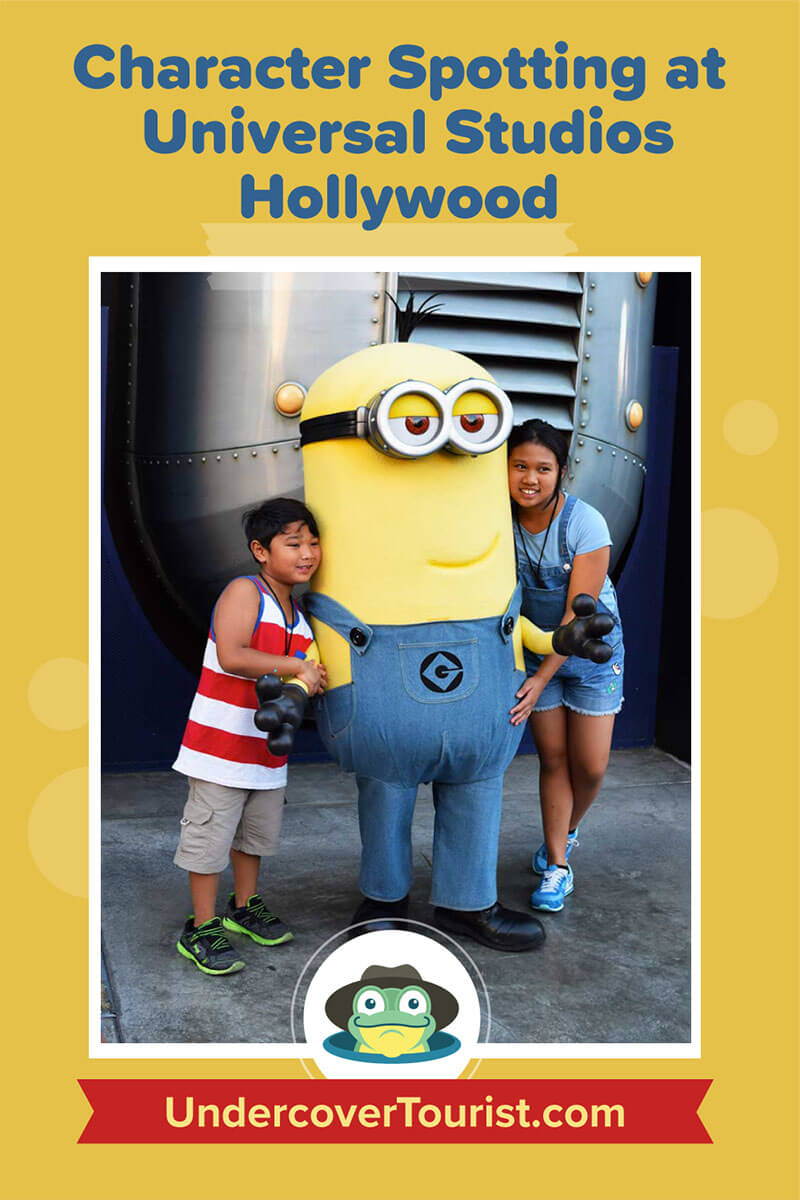 Hi everyone! It’s Lily here — your tadpole-sized expert for the small and the tall. When our family visits Universal Studios Hollywood, one of my favorite things to do is meet characters. It's prime time for a hug and some photos. Tad likes the scary monsters, Raptor Encounter and Transformers. Mommy and Daddy Frog get a kick out of meeting the Simpsons or classic characters such as Marilyn Monroe or Woody Woodpecker. I love to meet Minions and get a hug from my monkey pal, Curious George, or kitty bestie, Hello Kitty. Trust me when I say meeting characters is fun for everyone (but especially me). For us, seeing our favorite stars brings the movie studio to life. Read on to find out which Universal Studios Hollywood characters you and your tadpoles may run into!

For little ones like me, meeting characters is a super important part of my visit to Universal Studios Hollywood. With two sections to the park — Upper Lot and Lower Lot — there's plenty of hopping to do. Since I'm not quite tall enough to go on many of the thrills and attractions, I find my fun in other ways — like meeting characters! (Mommy Frog can give you even more ideas for entertaining toddlers and small children at Universal Studios Hollywood.) While many people may be thinking about the Universal Studios Hollywood characters, I treasure meeting pals from familiar movies and shows. Not everyone is cute and cuddly, either! It takes courage for a little tadpole to meet the imposing Optimus Prime or a dinosaur. Never fear, froggy friends! There is always another friendly character nearby who will be hoppy to meet you. 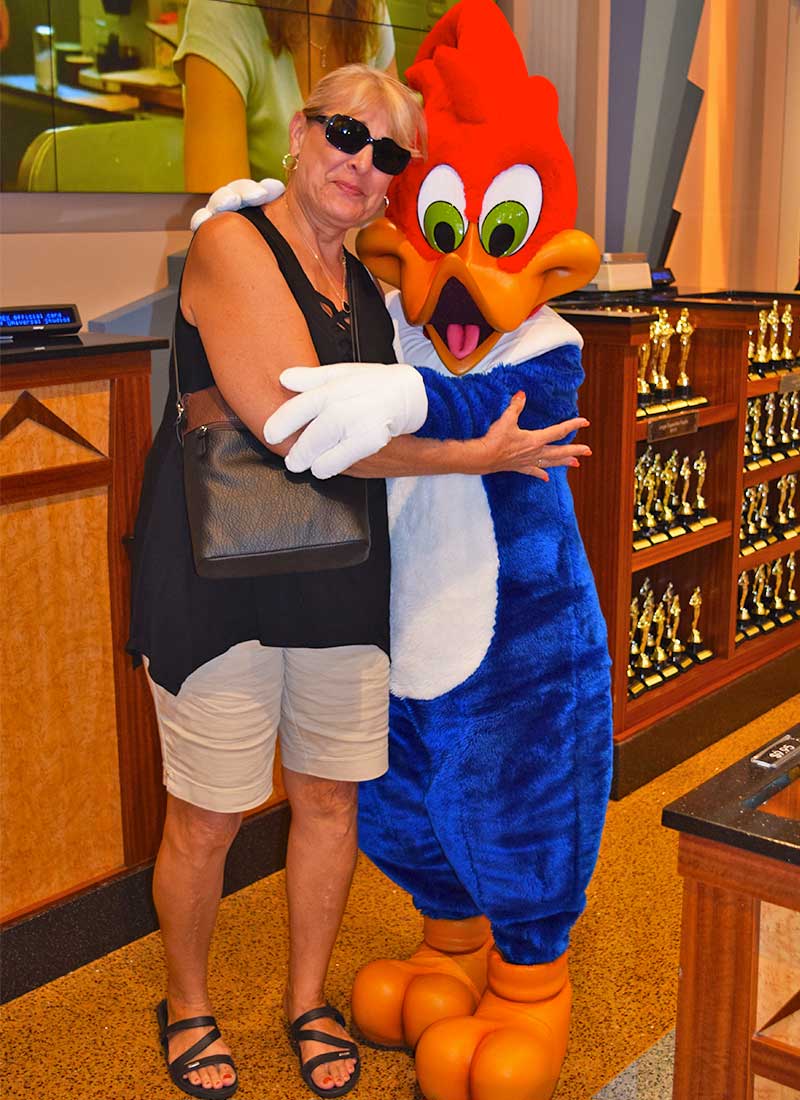 Keep Your Eyes Open as You Wander the Upper Lot

Many classic movie characters blend in as if they belong on set. You’ll see the likes of Marilyn Monroe, Beetlejuice, Dracula, Frankenstein’s monster, a Mummy, Doc Brown, Woody Woodpecker, Betty Boop and other characters in the Upper Lot. You'll find them walking the streets from the entrance through the Streets of Paris. We've even spotted characters inside stores while we were shopping for souvenirs!

The Upper Lot is a fun and interactive area. We have even seen classic New Yorkers yelling out of their apartment windows to guests below. Be sure to catch a photo in front of the New York street scene! Another fun photo op that does not involve a character is the Hollywood sign backdrop as you exit the Studio Tour. It looks like you visited the sign! 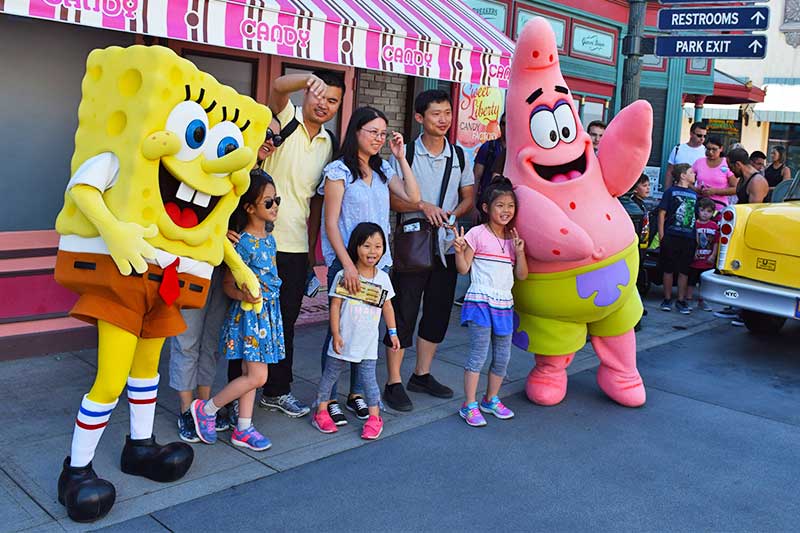 Sometimes, SpongeBob SquarePants and Patrick Star stay damp by the fountains, but we’ve also seen them near storefronts on the way to the park entrance. Scooby Doo, Shaggy and their squad have been spotted near the fountains, spots around the Upper Lot and outside of Mel’s Diner … probably trying to scare up some Scooby snacks. 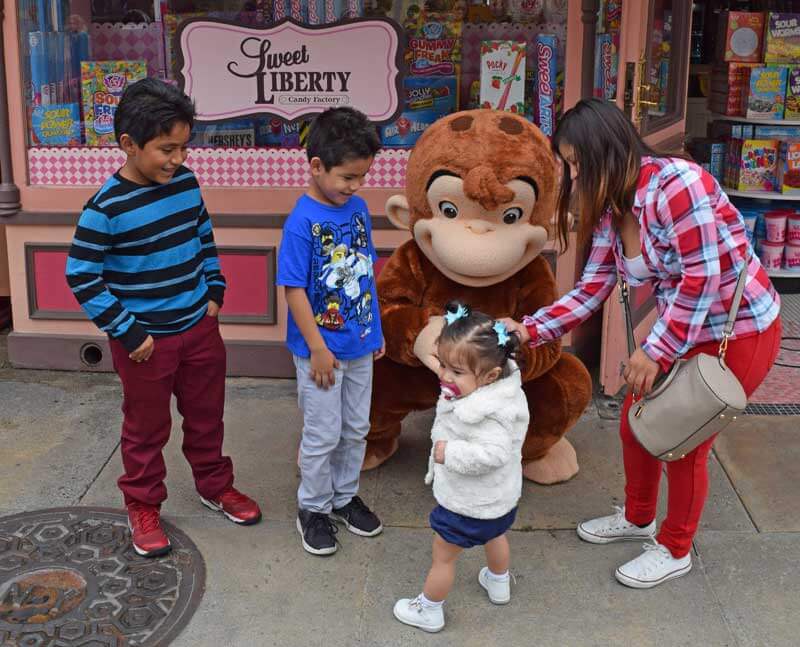 Keep your eye out for Curious George if you have a little one with you — he’s my favorite. (I am hopping with excitement just thinking of that silly monkey!) Hello Kitty has her own store in the Upper Lot. You can find her out in front of it. Purrrr! 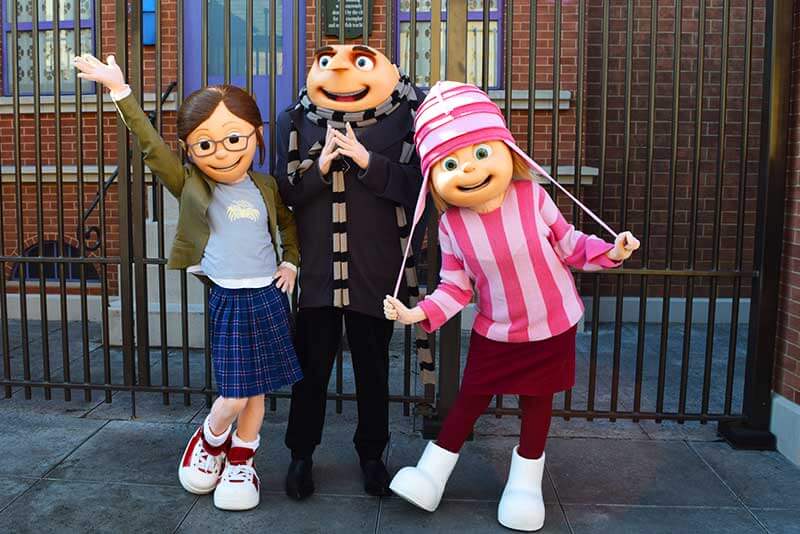 Everyone is excited to meet a Minion (both yellow and purple mutant) outside of Despicable Me Minion Mayhem. We have also seen Margo, Edith, Agnes, Gru and Dru meeting their fans outside of Miss Hattie’s Home for Girls. 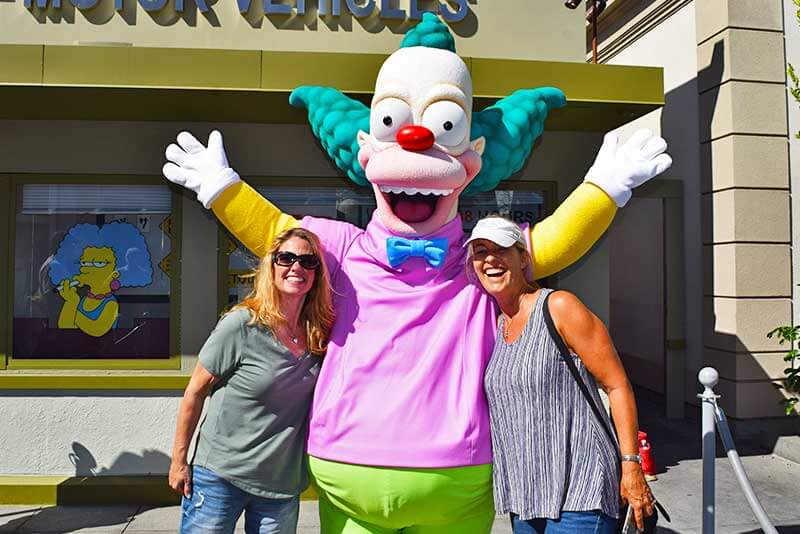 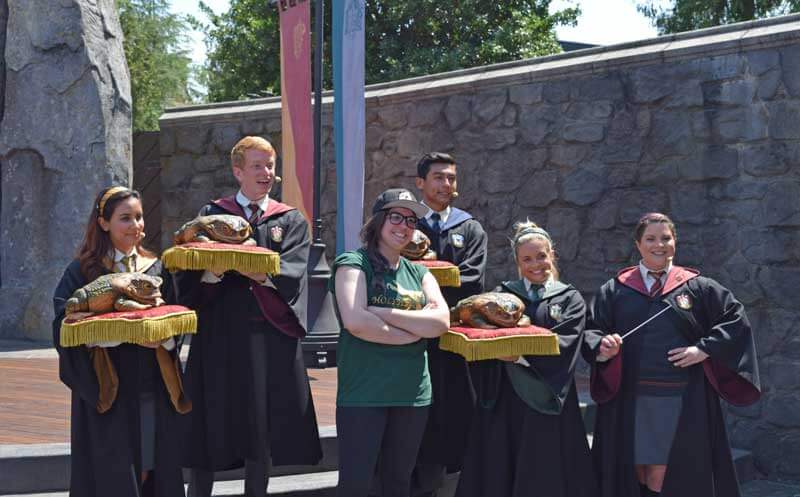 The most "magical" character meetings happen inside the Wizarding World of Harry Potter. Your first stop should be to get your photo with the conductor of the Hogwarts Express! Then, be sure to catch a show at the Hogsmeade Stage. After each performance of the Hogwarts Frog Choir and the Triwizard Tournament Spirit Rally, you can jump in a photo with the Hogwarts, Durmstrang or Beauxbatons students. 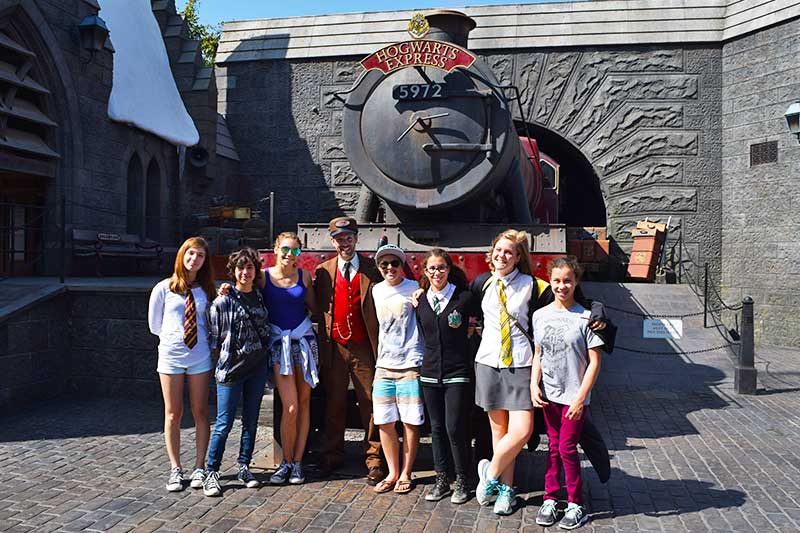 Another way to interact with wizards is by summoning them with your wand! If you've purchased an interactive wand (Tad has a whole post on that magical wand experience), you'll find helpful wizards at all of the interactive points. There are plenty of other magical folks working in Hogsmeade. They'll be pleased to take a picture as they stare mesmerized at your muggle-made phone or camera. They're not the traditional Universal Studios Hollywood characters you think of, but they make the world feel lived-in and real. Plus, you're in Hogsmeade. Come for the photo ops and butterbeer, but stay for the Nighttime Lights at Hogwarts Castle show on select nights and at certain times of the year.

Meet Transformers and Dinosaurs in the Lower Lot 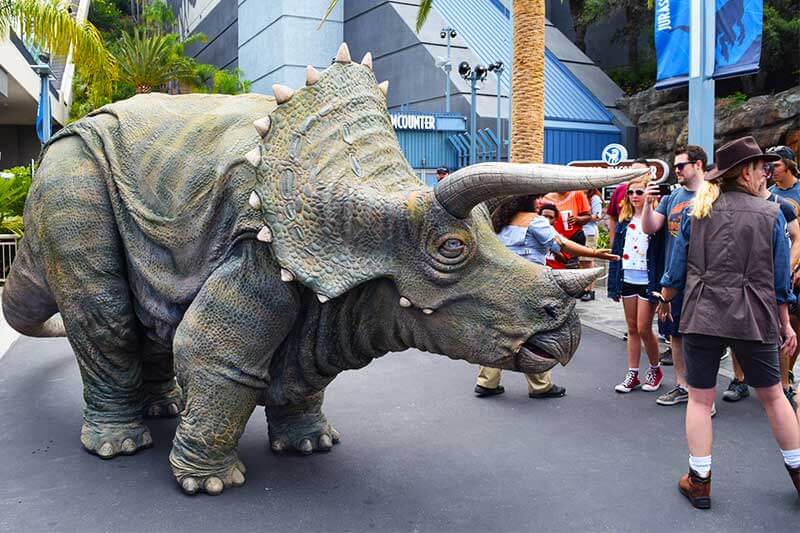 Down in the Lower Lot, you can meet Optimus Prime, Bumblebee and Megatron outside of the Transformers: The Ride 3-D. These larger-than-life talking Transformers are the real deal. In front of the new Jurassic World — The Ride, be on the lookout for a Raptor Encounter. The Velociraptor, Blue, is out of her enclosure, so watch out! She is so scary, but is strangely open to taking selfies with Tad. But don't get too close! Juliet, the giant triceratops, and the baby raptor, Tango, are a lot more gentle for little tadpoles like me. 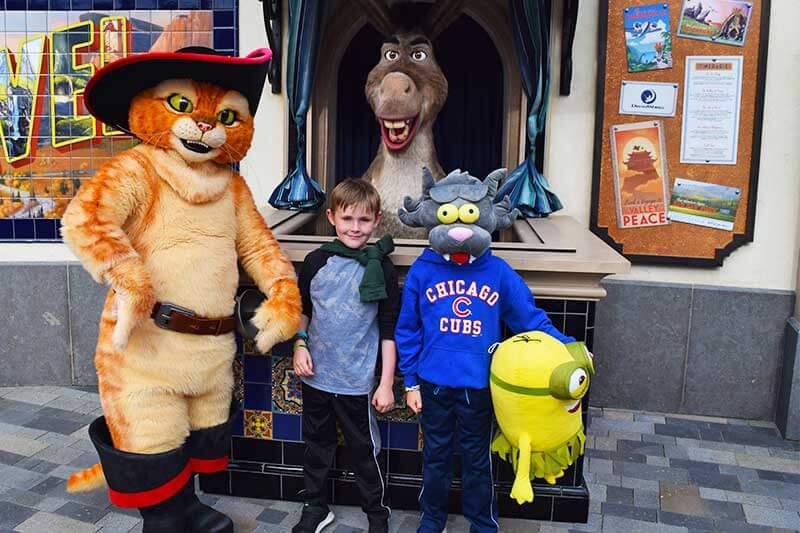 It's been a dream come true to meet my favorite DreamWorks characters in the Universal Plaza area, especially near Kung Fu Panda and the Animal Actors Show. You'll never guess who I've seen!

While some of the characters are out year-round, you'll see more of them, such as the Trolls, in the summer months. 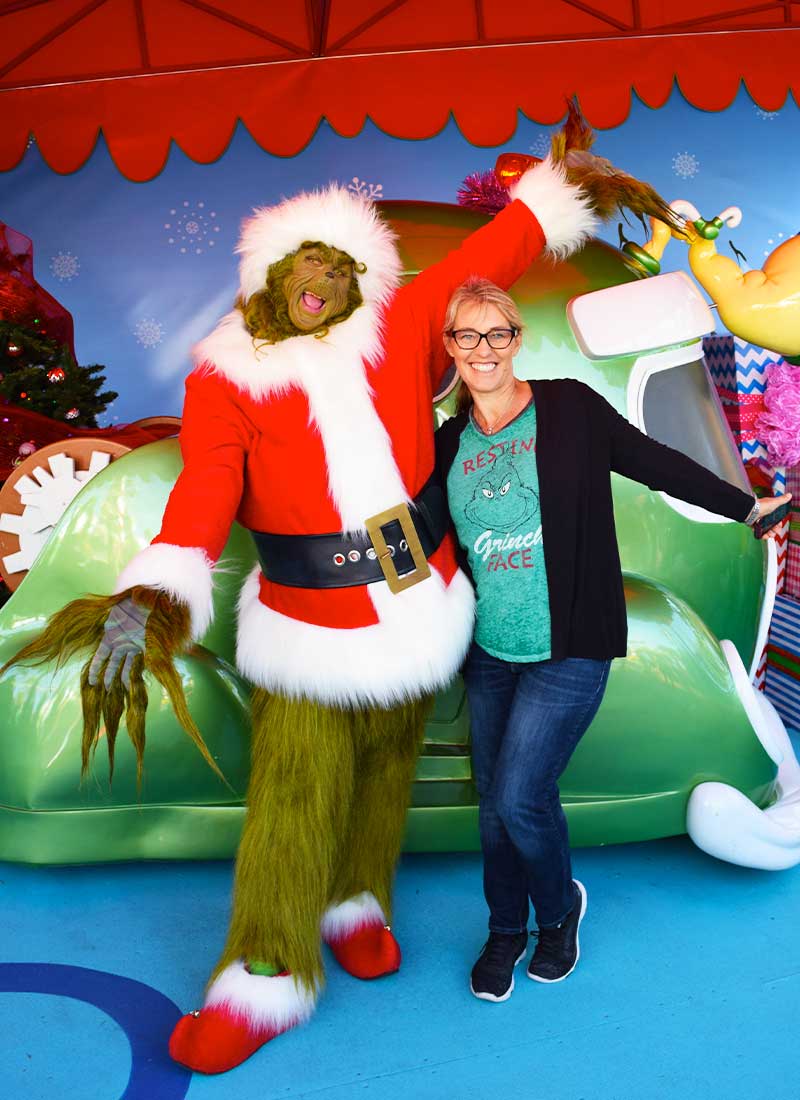 Meet the Grinch at Grinchmas

The most popular Universal Studios Hollywood Character — by leaps and bounds — is The Grinch. The mean one drops in during Grinchmas, which is held certain days in December. The wait to meet him last season was over 45 minutes, and for good reason. He is toadally animated, funny and spends a lot of time with each guest. Tad shot video of The Grinch in action, posing with guests last year.

You can also meet many different Whos (citizens of Who-ville, such as Cindy Lou-Who) during Grichmas. I love meeting all of my Who friends at Grinchmas! They are so funny! 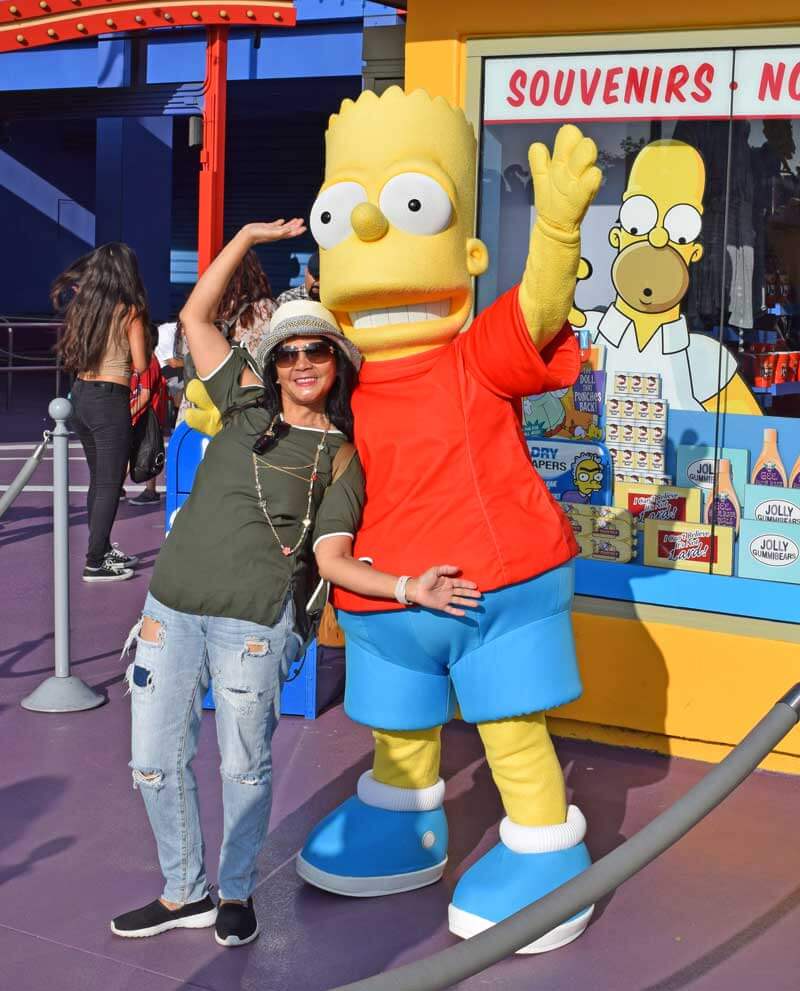 If you ever have questions about finding characters, just ask any Universal Studios team member. They will be hoppy to fill you in on the Universal Studios Hollywood character appearance times and locations. We have noticed that there are more characters out and about on crowded days.

If you find yourself at Universal Studios on a popular day — check our Los Angeles Crowd Calendar to know when  — consider all of the extra character experiences one plus. Another great thing about meeting Universal Studios Hollywood characters is that the lines are usually very short (except The Grinch, of course — leave it to him to make trouble).

You can find a list of the characters out here. That's also the best way to find the Frog Choir and Triwizard Spirit Rally times.

With so many opportunities to meet Universal Studios Hollywood characters, you're sure to hop away with many great photos and huggable moments. If your mom and dad need help, we've got more tips to maximize your time at Universal Studios. One of our favorite ways to make time for more character meet and greets is to get a Universal Express ticket. Then, we can hang out with characters instead of waiting in attraction lines. You can save some extra green by purchasing tickets from your favorite froggy friends!

Related: The Best Rides and Entertainment at Universal Studios Hollywood for Toddlers