Our Guide to Christmas at Magic Kingdom Park in 2020 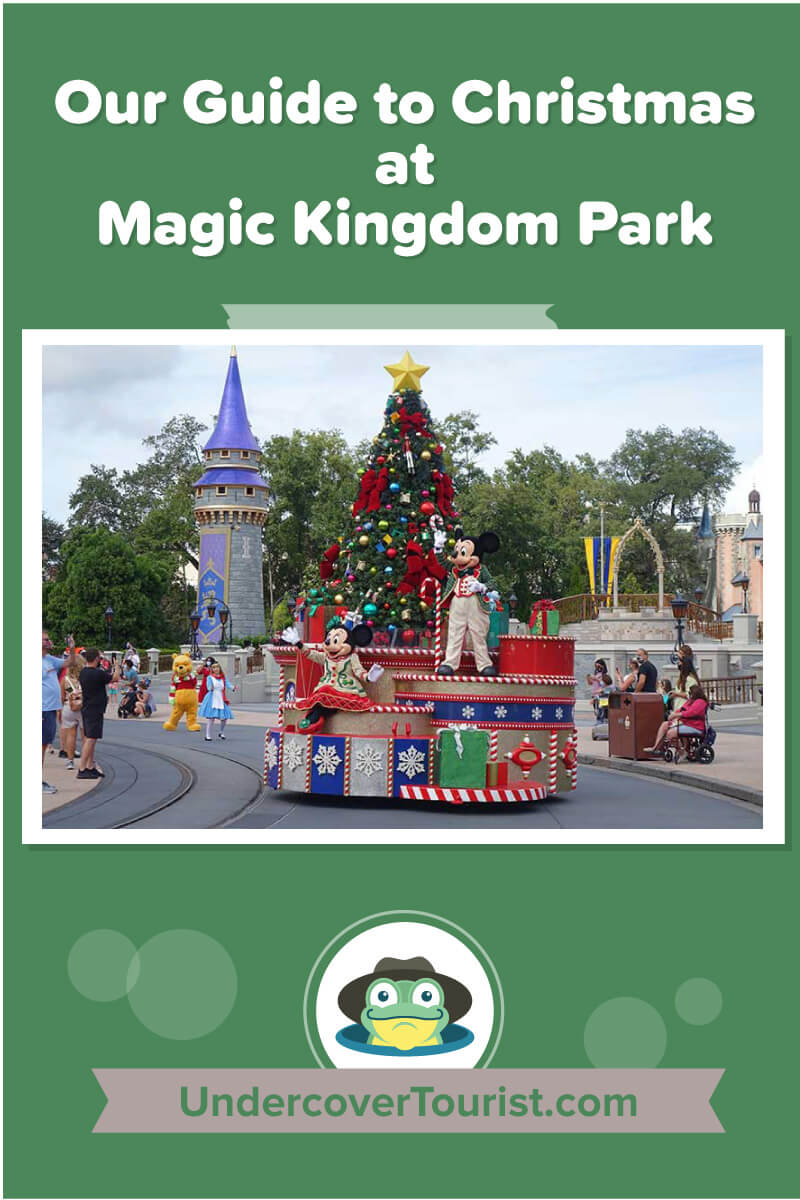 It’s beginning to look a lot like Christmas at Magic Kingdom Park! Just like past years, the transition from Halloween into the holidays practically hoppened overnight, as garland with giant red bows quickly replaced all of the Mickey pumpkin wreaths. Now, the iconic Christmas tree rises above the rooftops of Main Street, while toy soldier statues keep watch nearby. Though we had toadally understood the reason why, we were still a tad disappointed by the minimal Halloween decor this year, so we set realistic expectations that the holiday decorations may be just as sparse. Frogtunately, with a bit of pixie dust and a lot of holiday cheer, we found that there are plenty of surprises in store around the park! Keep reading for our first-hand experiences (yes, we’ve already been multiple times!), and our top tips for celebrating Christmas at Magic Kingdom in 2020.

The holiday festivities officially kicked off Nov. 6, 2020, and Magic Kingdom will continue to be a winter wonderland through Dec. 30, 2020. Let’s start by getting the lump of coal out of the way first. With Mickey’s Very Merry Christmas Party being canceled, Mickey's Once Upon a Christmastime Parade, as well as the fireworks, stage shows and character greetings, cannot take place due to the current safety measures in place. Frog families hoping to get the usual Disney World Christmas experience may feel the absence of the special holiday entertainment, but there is still a ton of festive fun to be had! On the plus side, the crowds will be lower due to park capacity limits and the use of Disney Park Pass reservations. Psst — if you haven’t already gotten your tickets and secured your reservations, hop to it soon before the Disney Park Passes are completely booked this holiday season! 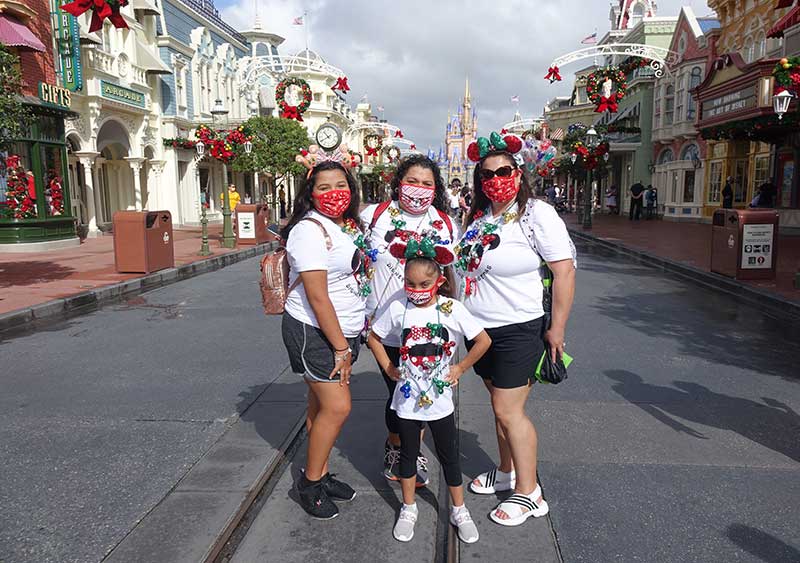 During Mickey’s Very Merry Christmas Party, it can be overwhelming to get everything done within five hours of party time. For instance, you may have to sacrifice ride time in order to meet Sandy Claws. The event requires planning in advance — in fact, it’s never too early to start planning for next year by checking out our event guide! However, with Christmas festivities taking place during regular park hours, our experience has been relaxing, just as it was for the Halloween season. We waved to our favorite characters in all of the cavalcades (and the ones who popped up around the park), jumped on the rides we wanted to go on and ate lots of yummy treats … all in a day.

While crowds have been increasing, and we would expect that to continue during the holidays, it's important to note that posted wait times generally continue to be inflated. For example, on a recent visit, we waited 30 minutes for Space Mountain, when the wait time said 50 minutes. The times when we see the most crowds are when everyone is gathering last minute for the cavalcades, and a lot of people gather in the hub to watch the last Santa cavalcade and the beginning of castle projections. Lines can be long for treats, especially Main Street Bakery, which took about 25 minutes.

Here’s everything you need to know about visiting Magic Kingdom (ranging from cavalcades to cupcakes!) during the holiday season this year. 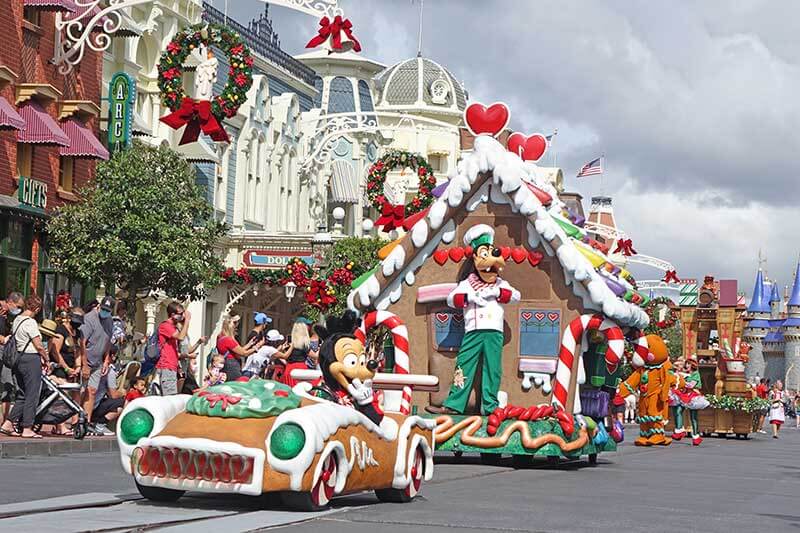 Get ready — all of your favorite characters are ready to jingle and mingle this holiday season! Rather than parades with set times, the following Christmas cavalcades will hoppen sporadically throughout the day until dark:

The cavalcades feature some of the floats from Mickey's Once Upon a Christmastime Parade. But if you haven't seen the parade outside of Mickey's Very Merry Christmas Party, it's neat to see them in the daytime. We noticed more details, such as the train circling around Mickey and Minnie's Christmas tree.

In addition to the special Christmas cavalcades, the Toy Soldiers have joined the Main Street Philharmonic, marching along to Yuletide musical favorites. The Disney Princess Cavalcade also features a holiday overlay with silver garland and festive dresses. You can catch these cavalcades on a frequent, rotating basis throughout the daytime (they do not run at night).

Cavalcades have replaced parades so that crowds do not gather for an extended period of time, and the random timing of the cavalcades helps prevent guests from gathering in advance. However, you can expect that last-minute crowds will indeed form … but usually only for a minute or two as the cavalcades pass by. Afterwards, the crowds disperse as quickly as they appeared. If you want a “front row” view of the cavalcade, you will likely be joined by other frog families close by. It was a common occurrence that we’d see a cavalcade coming toward us from afar, so we’d get in a good position far enough away from others. But as soon as it got close, we’d suddenly be next to other guests who stopped last minute. If you do not feel comfortable enough being a bit closer to others for a minute or two, we suggest watching the cavalcades 6 feet behind the edges of the sidewalk or pathway, along the traditional parade route from Frontierland to Town Square. 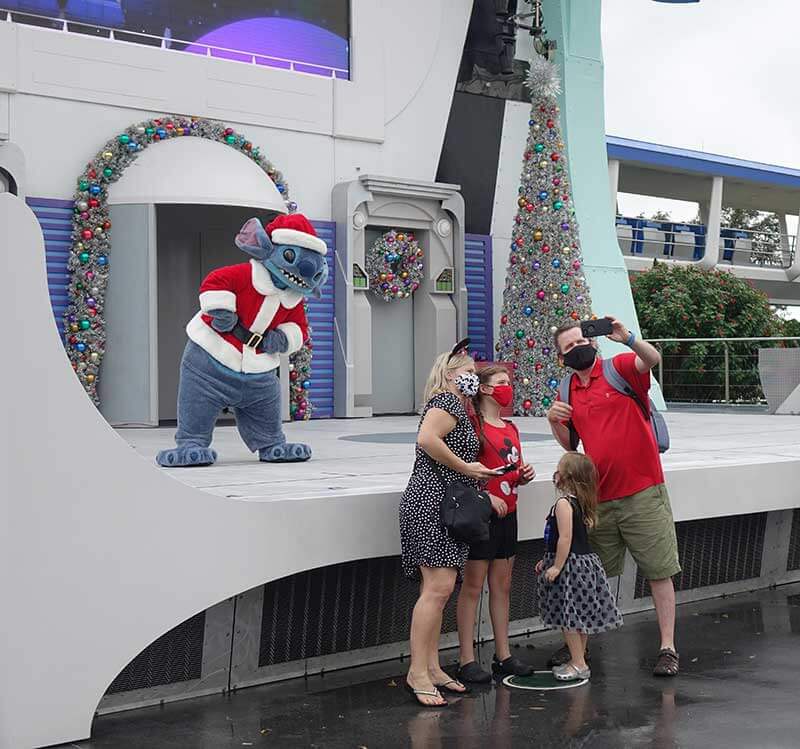 In addition to seeing characters in the cavalcades, characters can pop up around the park and you never know who you may see! The Dapper Dans also perform from the top of the Main Street train station. We spotted the Muppets, who made a surprise return to Liberty Square. Kermit, Miss Piggy, Sam the Eagle, Gonzo and Fozzie take turns greeting guests below from their windows. The Country Bears and Chip 'n' Dale spread Christmas cheer atop the Country Bear Jamboree rooftops. Also, catch Santa Stitch for a socially distanced selfie at the Rockettower Plaza Stage in Tomorrowland. 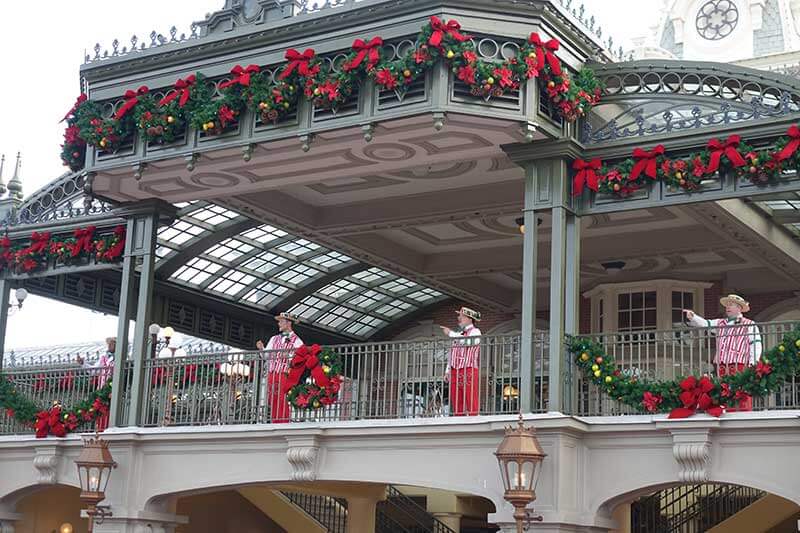 We personally didn't see them, but other frogs saw Jiminy Cricket on the balcony of Pinocchio Village Haus and Santa Buzz (who alternates with Santa Stitch) on the stage in Tomorrowland. As we make return visits, we'll keep you updated in case we see any others! 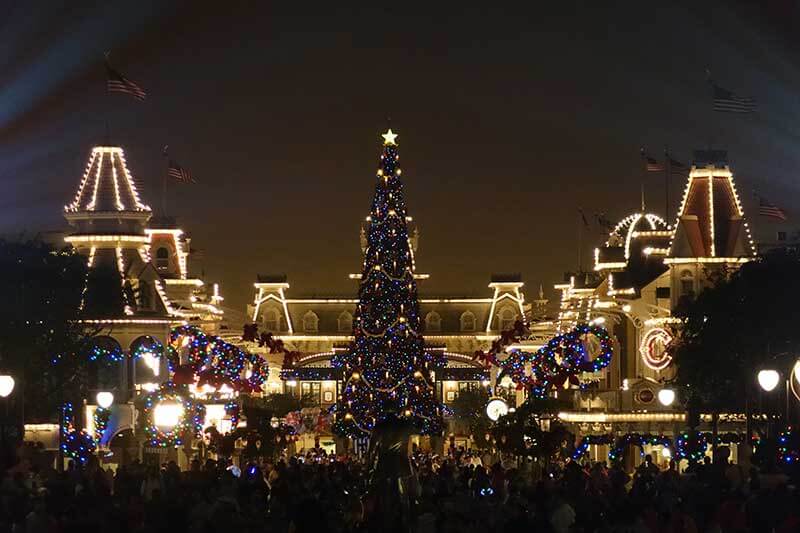 You’ll find most of the Christmas decor as soon as you walk into Main Street, U.S.A. The iconic Christmas tree is back, along with toy soldier statues, wreaths and garland galore. Snow falling on Main Street is a staple during Mickey’s Very Merry Christmas Party, but we’re sad to say it is not hoppening this year. (Instead, get your “snow” fix at Disney Springs during the 2020 holiday season!) 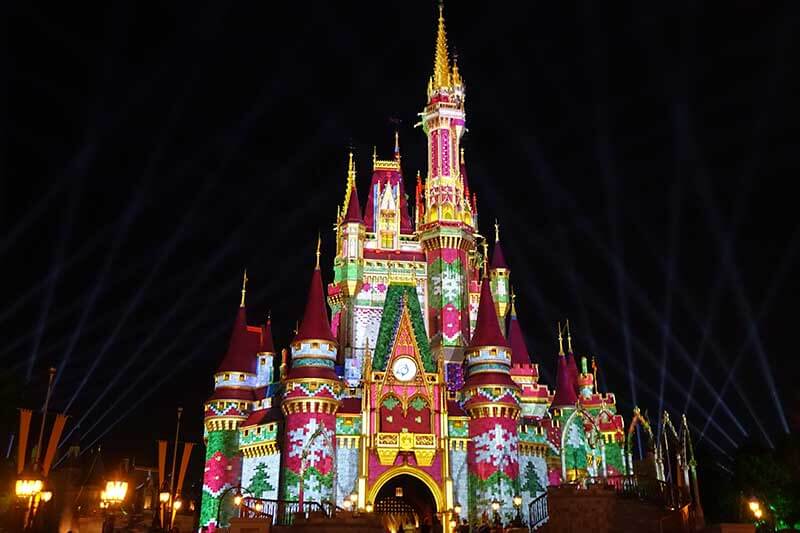 Once it gets dark outside, Cinderella Castle transforms into a picture-perfect holiday backdrop. Taking the place of the Castle Dream Lights, four different projection designs transition about every 15 minutes throughout the night. Recently, there's even been some light pyrotechnics accompanying the projections! We recommend catching the projections in passing rather than waiting in front of the castle through a complete cycle to see all of them, as it is not a projection show. 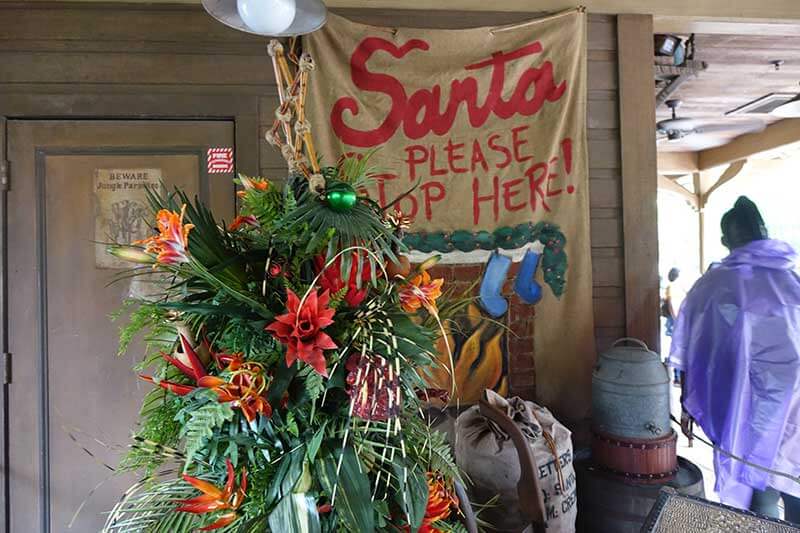 Jingle Cruise has returned! The homesick skippers have decorated once again to show off their festive spirits, turning the tour into a yuletide adventure. Hop aboard the Eggnog Annie or Vixen Val, and sit back and relax as you listen to the punny yuletide jokes. 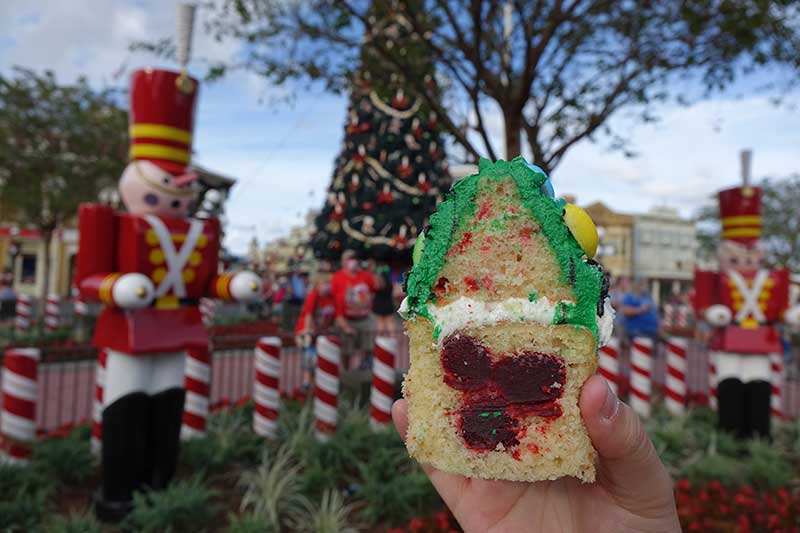 One of our favorite things about the holidays at Disney World are the seasonal treats! At Magic Kingdom, try one of the five specialty desserts below ... or why not all of them? 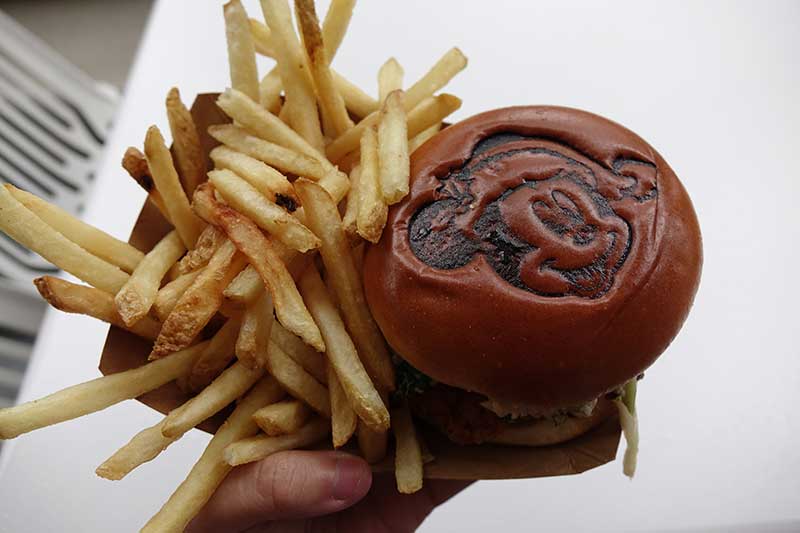 The top hit among the Frog Family was the Twice Upon a Cupcake from the Main Street Bakery. Not only was it super photogenic (hello, hidden Mickey), but it also satisfied our taste buds! You can find even more holiday-exclusive treats at Main Street Confectionery, Pinocchio Village Haus, Sleepy Hollow, Gaston’s Tavern, Storybook Treats and Auntie Gravity’s. Looking for a full meal? Over at Cosmic Ray’s Starlight Cafe, munch on the Spice Up Your Holiday meal — a spicy chicken sandwich with sriracha aioli, pickle slaw and a Santa Mickey brioche bun (just look at that hat — adorable!). 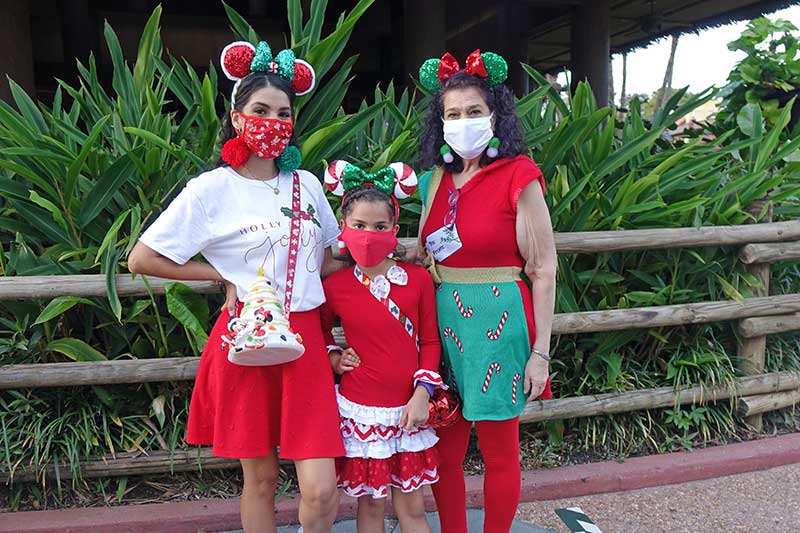 If you’re a popcorn bucket collector, then you'll love the new Christmas Tree popcorn bucket. It's almost the same as last year's version (which is also still available), but instead of being green, the tree is white and Minnie has been added. You can find it at various locations not only in Magic Kingdom, but other parks as well.

As for holiday merch, let's just say that all I want for Christmas is the Loungefly Ugly Christmas Sweater Mini Backpack ... and the gingerbread Minnie ears ... AND the silver and gold Cinderella Castle spirit jersey. It's easy to get yourself decked out for the holidays from head to toe! The widest variety of holiday merchandise that we found was at the Emporium. (If you'll be hopping  to Disney Springs during your trip, you'll find the widest variety of Christmas merchandise at World of Disney.)

Tips for Visiting Magic Kingdom Park During the 2020 Holidays 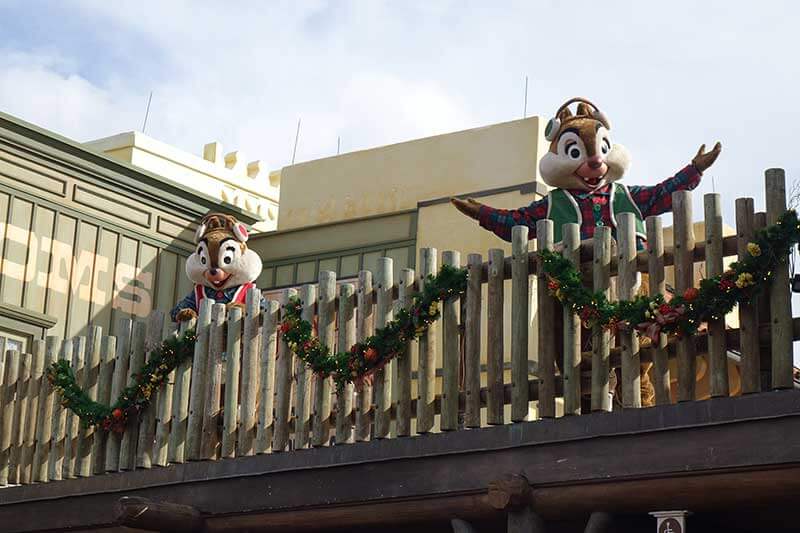 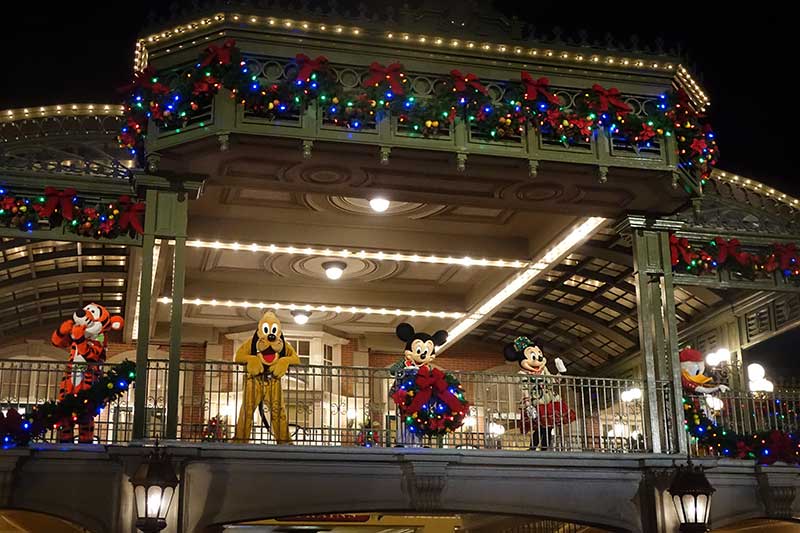 In a year like 2020, we found Christmas at Magic Kingdom to be a special gift to our Frog Fam. While the festivities were less grandiose than previous years, they were no less merry (or magical!) for our whole squad. After all, it's not every day that Santa calls you by name — I'll never froget the wonder in Lily's eyes! Those precious moments together are what the holidays are all about. And who couldn't use a little extra cheer this year? From our family to yours, Hoppy Holidays!

Have you been to Christmas at Magic Kingdom Park? What was your favorite part? Be sure to share with us in the comments below!