What better way to celebrate a new year than at our favorite place — Disney World! New Year’s Eve is historically one of the busiest times at Walt Disney World. Don’t be scared away by the chaos ... there is plenty of fun to be had as you count down to the new year! Special fireworks return to Magic Kingdom and EPCOT to ring in the new year — and every park but Animal Kingdom will be open until past midnight! Here's everything we know (so far) about New Year's Eve 2022. Get your party hat (or ears) ready! 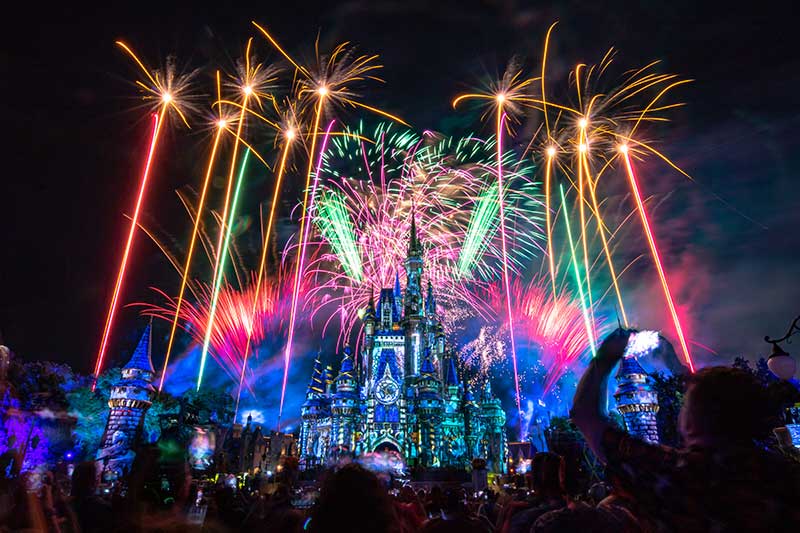 Overview of New Year's Eve at Disney World in 2022

New Year's Eve events at Disney World are amazingly fun, but they also tend to draw crowds. Both Magic Kingdom and EPCOT will have special nighttime spectaculars for the occasion. Here are the current park hours (though there can be changes once we get closer, so be sure to check the My Disney Experience app or the Disney World website prior to your visit):

If you plan on hopping to Walt Disney World for New Year's Eve 2022, be sure to make your Park Pass reservation if you haven't already, and be aware that park hopping may reach capacity at certain parks.

While there may be some surprise festivities in store, we definitely expect special New Year's Eve food and possibly merchandise to be available at all of the parks. Holiday entertainment and hoppenings may still be going on at each of the parks, though EPCOT International Festival of the Holidays ends on Dec. 30. We also expect there to be some special New Year's Eve dinner menus at Disney Springs, which also offers lots of holiday merriment to enjoy, including the Christmas Tree Stroll.

If staying in at a Disney Resort, all resorts typically have a champagne and truffle package available to guests in their on-site retail stores, while supplies last! Disney Floral and Gifts also usually offers some pre-packaged options available for the occasion, featuring hats, champagne and more. You can check out all of the offerings here. If you'd prefer to toast in advance in the parks, you can find a glass of bubbly (including champagne, sparkling wine or cider) at most locations around the theme parks and Disney Springs (including table-service restaurants at Magic Kingdom).

Here's a look at the festivities that generally hoppen all across Walt Disney World Resort to ring in the new year. We know we aren't the only froggies looking forward to 2023 — cheers! 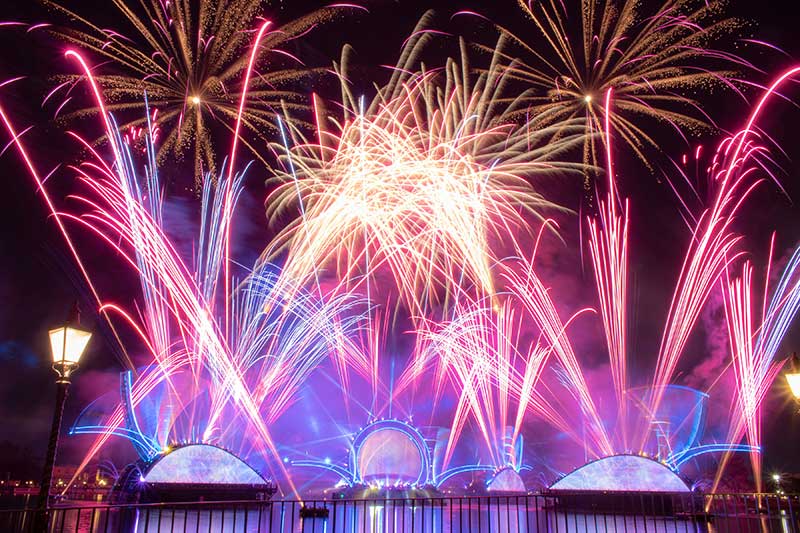 EPCOT is by far the most exciting place to be on New Year’s Eve at Disney World, though with lots of activities come lots of people. As one of the largest parks, EPCOT is perhaps best suited for crowds. We think the crowds are worth managing for these fun-filled festivities! There’s no need to choose ... you can take part in all of these activities for a complete night of celebration.

The Countdown Fireworks show at EPCOT is the most popular way guests celebrate New Year's Eve at Disney World. A countdown to the new year is typically projected onto Spaceship Earth as fireworks light up the sky — we are hopful there will be some extra exciting projections. Enjoy a showing of the new nighttime spectacular, Harmonious at 6:30 p.m., and then the countdown fireworks beginning at 11:54 p.m.

Walk from Mexico to Canada (and from the old year to the new) at EPCOT’s New Year’s Eve parties. There may be live DJs hosting dance parties throughout the park. Dance the night away as you sip and savor some of your favorite flavors around World Showcase. These parties are a nice way to add some special fun to your holiday evening between your adventures on Test Track, Soarin’ and more. When it hits midnight in each country's respective pavilion, listen for a festive announcement and watch for a burst of colorful fireworks.

American Gardens Theatre typically hosts a variety of performances throughout the night for the ultimate NYE entertainment. 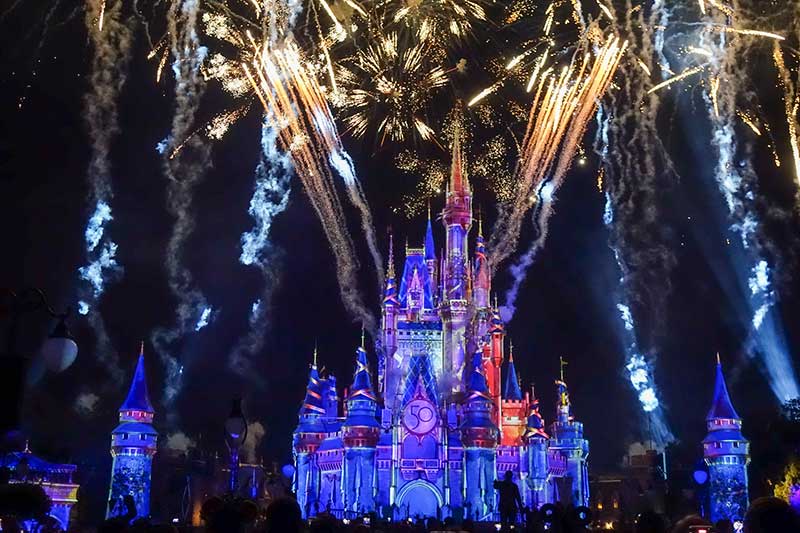 Magic Kingdom is the most popular park and has historically been the most crowded during New Year’s Eve at Disney World. If Magic Kingdom is your park of choice, we recommend you arrive early and stay all day since it is likely to reach capacity for some part of the day. Save your viewing spot for parades and stage shows at least an hour in advance.

Fantasy in the Sky Fireworks 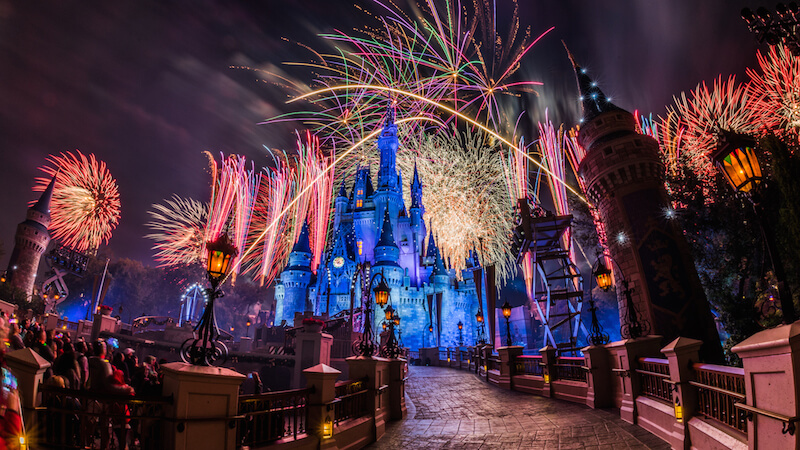 The new year is sure to start with a bang — literally — thanks to Magic Kingdom’s Fantasy in the Sky fireworks. Our whole frog squad loves how wild and colorful this fireworks extravaganza is. Seeing the sky above Cinderella Castle glow with this booming presentation is a truly magical way to celebrate the new year. As a huge fan of fairytale magic and the sentiment of Magic Kingdom, this is my personal fave.

Magic Kingdom will show the Fantasy in the Sky fireworks Dec. 30 and 31 at both 6:30 p.m. and 11:50 p.m. We like having the extra night at Magic Kingdom as an option if you can't decide between this one and EPCOT's fireworks. We usually do Magic Kingdom on the 30th and then EPCOT on actual New Year's Eve for the best of both worlds!

On both Dec. 30 and 31 in 2019, Frontierland and Tomorrowland hosted DJs for tadpole-friendly dance parties from 7 p.m. to midnight. A few of our friends from the Briar Patch and the Country Bear Jamboree made an appearance to do-si-do into the new year. This was a memorable, family-fun way to celebrate an awesome year of fun.

Other Places to Celebrate New Year's Eve at Disney World 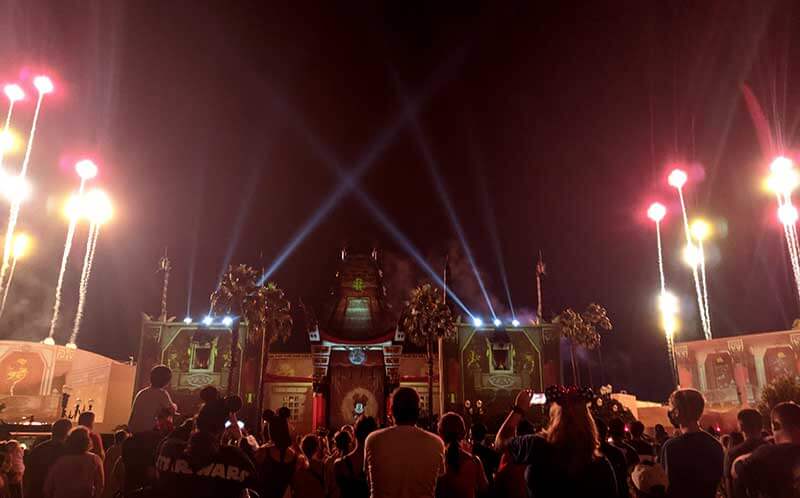 While EPCOT and Magic Kingdom are the main attractions for New Year's Eve, there are still plenty of ways to celebrate the new year throughout the resort!

Disney's Hollywood Studios typically offers a countdown and fireworks spectacular, though it's generally more low-key than the other parks. Enjoy the Wonderful World of Animation projections at 9 p.m., as well as showings of Fantasmic! at 8 p.m. and 9:30 p.m.

At Disney's Animal Kingdom, you'll typically find special New Year's Eve-themed food and drinks. In previous years, DJs have kept the party hoppin' in Asia, Discovery Island and DinoLand U.S.A. With Animal Kingdom currently scheduled to close at 8 p.m. on Dec. 31, it's a more peaceful and early way to celebrate the end of 2022 (just in time for the tadpoles' bedtime!).

While there won't be a nighttime spectacular, Disney Springs' special dining and shopping options never disappoint! Though the Christmas Tree Trail officially ends Dec. 30, the trees will likely still be up for you to enjoy.

Not wanting to brave the night crowds? Consider a relaxing night-in at your hotel! Many of the resorts will offer special activities and select resorts even offer a view of the fireworks, like Disney's Polynesian Village Resort.

In addition to in-park celebrations, there are often special options available at Walt Disney World Resort hotels. Whether it's an NYE menu, a dance party, a champagne toast, or a combination of all three, there's something fun for every froggy. In the past, these have included:

Here's our tips for making the best of New Year's Eve at Disney World! 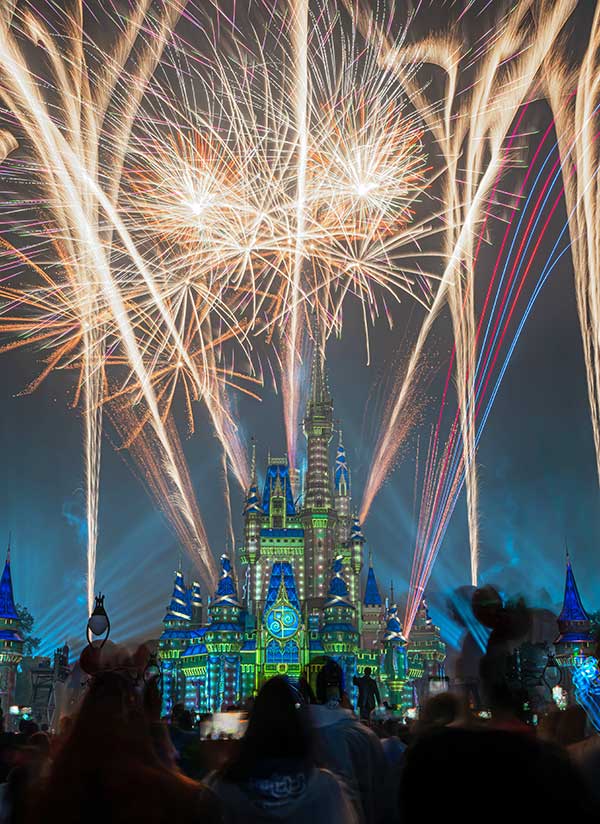 There are so many hoppin’ activities to choose from to leap into the new year at Walt Disney World. When we’re at Disney World for a holiday, we really like to take advantage and celebrate in a special, unique way. What do you have planned? Tell us in the comments.

Related: Top 10 Tips for Disney World During the Holidays