on a 4-day/4-night (or 5-day/5-night) Hotel & Ticket package to Universal Orlando Resort. 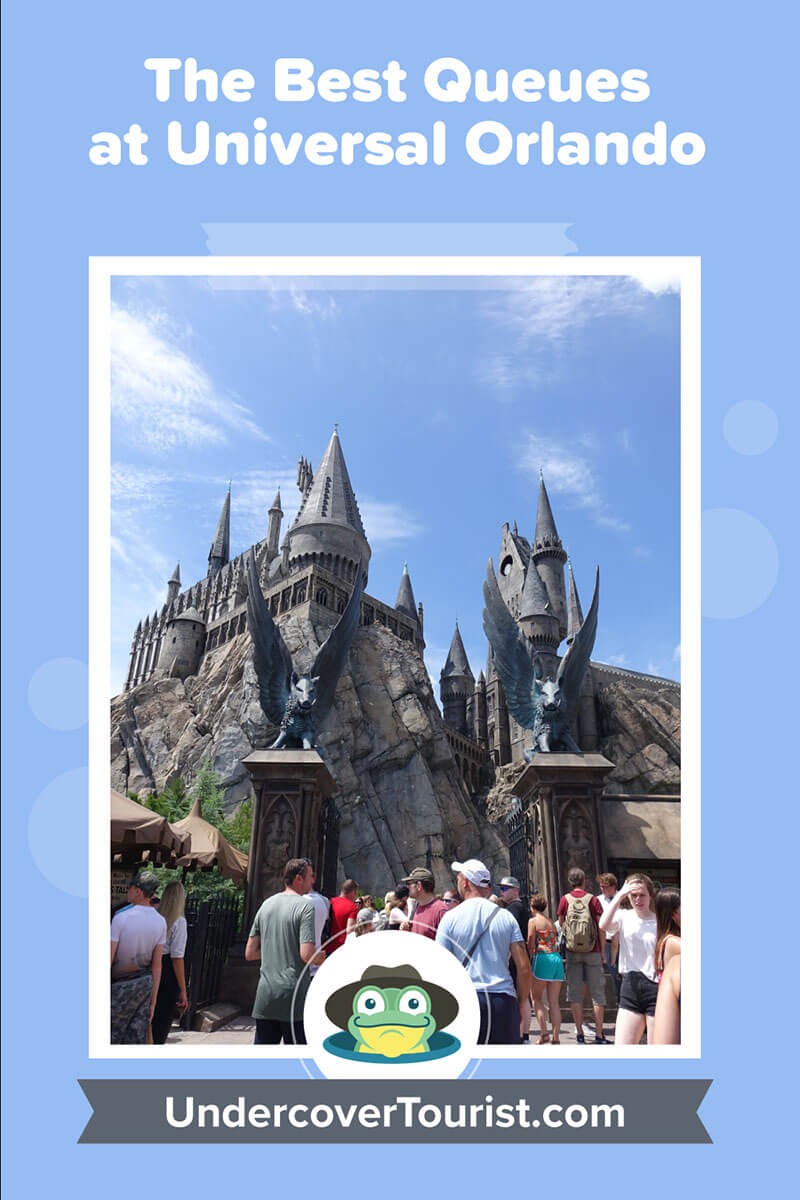 ‘Sup! Tad here. As the Frog Family’s thrill seeker, I’ve hopped in line for so many rides, shows and attractions at Universal Orlando Resort that I’m THE self-proclaimed ride expert there. As much as I love the actual rides, waiting in line is an entire experience of its own. With every new attraction, queue designs have gotten more immersive and epic over the years! They deserve their own appreciation post, so I’ve put together my definitive ranking of the very best queues at Universal Orlando. (These picks are solely based on the queue, not the ride itself!)

Lines are no fun, and it seems like the ride designers know it, too. Boring switchbacks and safety instructions playing on repeat just don’t cut it anymore. Nowadays, the queues use modern technology to include backstories, audio-animatronics, virtual waiting rooms or even live actors to keep park guests entertained. Sure, you can skip to the front of the line with an Express Pass or get in the shorter Single Riders line … by doing so, you might skip over major parts of the queue. But for these rides, I highly recommend going through the regular line if it’s your first time. Without further ado, cue the best queues at Universal Orlando!

The Best Queues at Universal Orlando

10. The Amazing Adventures of Spider-Man 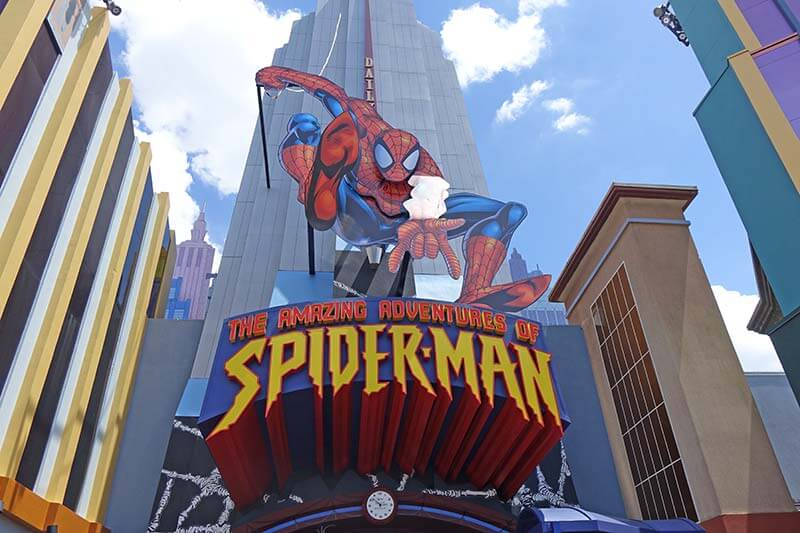 This amazing adventure begins inside The Daily Bugle newsroom. You snake through the cubicles where you see empty desks and abandoned sandwiches. While inside the newsroom, you hear and see live coverage that all of the villains — Hobgoblin, Hydro-Man, Doctor Octopus, Electro and Scream — have joined together to steal the Statue of Liberty. The Daily Bugle's editor, J. Jonah Jameson, wants to send you out to cover this breaking news, thus setting up the ride's storyline.

What I love about the queue is that it keeps the cartoonish theme not only with the videos playing, but everywhere you look. As somewhat of a video journalist myself, I find the various signs hanging on the walls quite amusing. 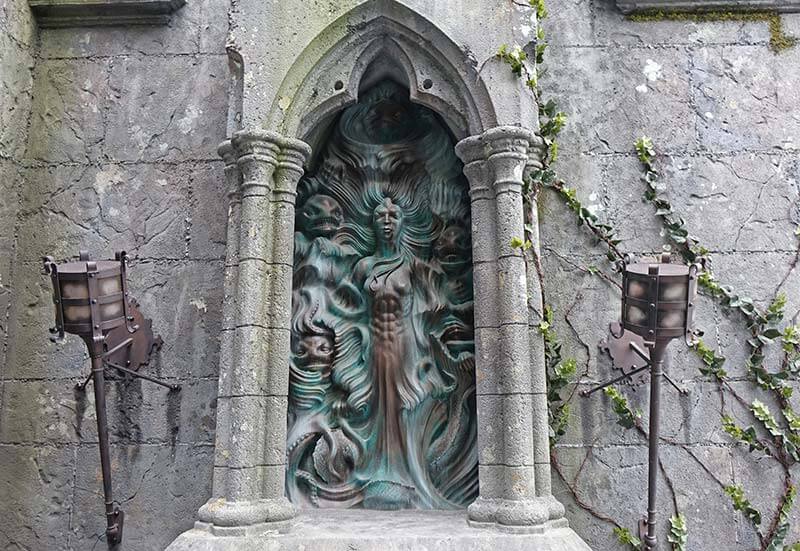 In the newest of the best queues at Universal Orlando, venture deep into the Forbidden Forest. The queue gives you the first look at the brand-new roller coaster’s track, which stays mostly out of view from the entrance. You’ll stroll by Hagrid’s hut and pumpkin patch before reaching and entering the abandoned, ivy-covered ruins in the Forbidden Forest — a new setting that was created exclusively for the ride. Inside the ruins, Hagrid has set up a terrarium where he kept his Blast-Ended Skrewts before they outgrew it and a nursery for his hatching dragon eggs. In the pre-show, Hagrid and his dog, Fang, join Arthur Weasley, who is helping Hagrid duplicate the motorbike and its sidecar. See if you can spot the tribute to the former Dueling Dragons ride!

8. Revenge of the Mummy 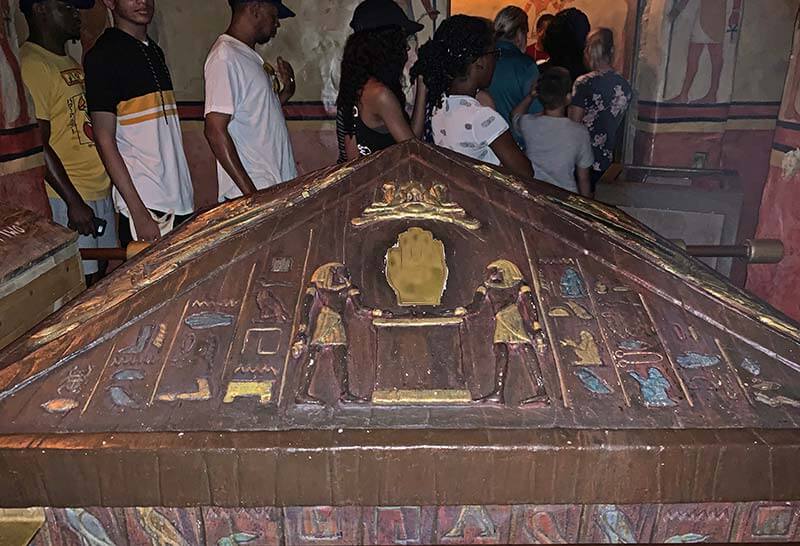 The queue starts out as if you’re getting a behind-the-scenes movie set tour of the fictional sequel to "The Mummy," "Revenge of the Mummy." You initially see displays with various props and costumes while a mockumentary video plays, explaining how the mummy’s curse was proven to be real while filming the original movie, and a crew member has now mysteriously disappeared. Then, you enter a dimly lit room that looks like an archeological dig inside an Egyptian tomb. You can interact with elements that add to the creepiness factor. For instance, reach into a hole in the wall to try to grab a ruby, if you dare. 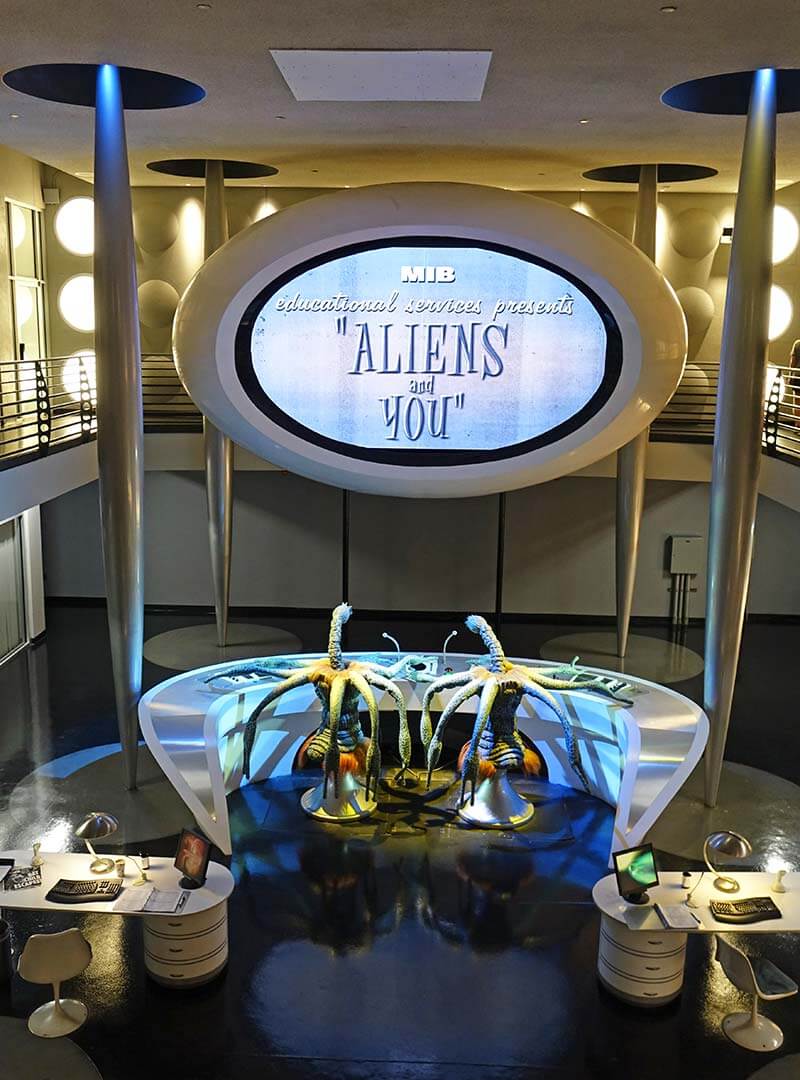 While you’re outside of the building that resembles the 1964 New York World’s Fair, it looks like you’re waiting to experience an exhibit called “The Universe and You!” After stepping inside, a retro video for the exhibit starts, only to be interrupted by a MIB agent who explains you’re being recruited and need to undergo training. After a ride in an elevator, the queue then snakes down the hallways of the MIB headquarters. You pass by the break room where the “worm guys” are drinking coffee.

But my favorite part comes next … the Immigration Room! While walking on the upper level, look down at the computers and control center with alien twins, Bob and Bhnxaxx, helming operations. If you want a closer look, ask the team members at the ride entrance if the “secret” immigration tour is available (which is usually in the afternoon when they have more team members working, but not on a super busy day). I love combing through the intake forms and Weekly World News tabloid clippings on the desks. Just keep in mind it’s not always available, but if it’s a particularly slow day at the park, it doesn’t hurt to ask! 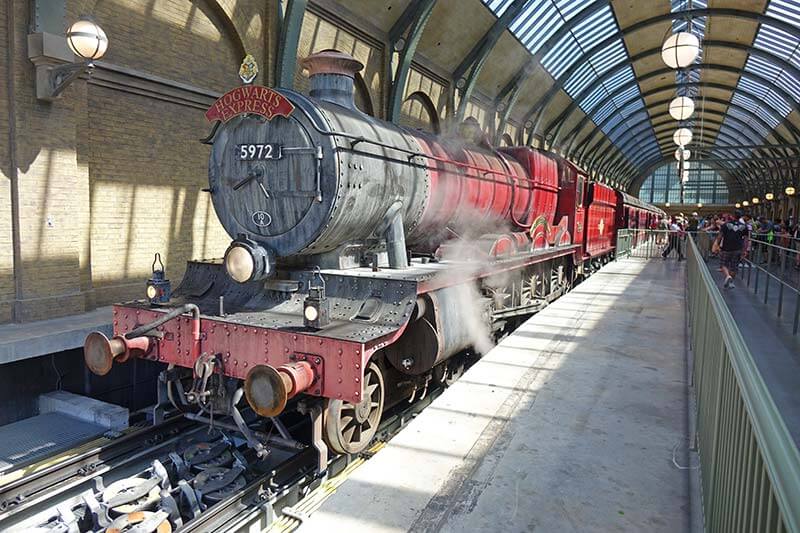 It’s the moment you’ve been waiting for … you get to hop aboard the Hogwarts Express for a one-way trip to Hogwarts! You'll feel like you’re actually in London as you walk into King’s Cross Station. By the way, if you ask a King’s Cross employee how to find Platform 9 ¾, they will look at you in confusion or remark how crazy you sound. You pass by the Divine Magic perfume ad that Harry and Dumbledore see in the "Harry Potter and the Half-Blood Prince" movie. Don’t worry about getting hungry in line because you can buy chips (or as the Brits across the pond say, crisps) at a mini market in the middle of the queue.

Once you walk up a flight of stairs, you’re close to Platform 9 ¾. From a distance — thanks to some magical special effects — you’re able to see the people in front of you walk straight through the brick wall. After turning the corner, the Hogwarts Express and an animatronic Hedwig greet you on the platform! 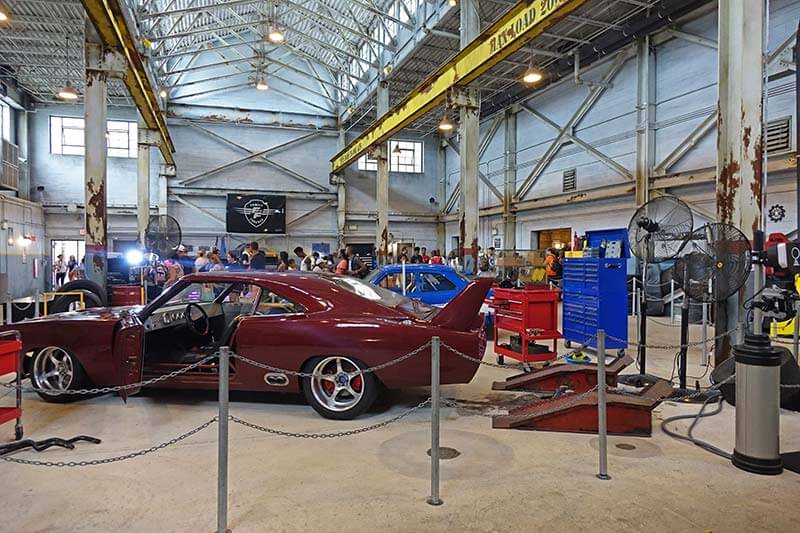 The building’s exterior looks like an abandoned warehouse surrounded by a chain-link fence and no trespassing signs. But once inside, it’s clear that the Fast and Furious crew has set up their headquarters here. The queue winds through the car garage, which features the original models and replicas from the films. Keep an eye out for Easter eggs that pay tribute to former attractions, such as Disaster! and Beetlejuice’s Graveyard Revue. Before you get to the loading area, you stop for two pre-shows in the family break room and Tej’s war room, where live actors interact with Mia and Tej via video calls. These short chats set up the ride’s main storyline.

You have the option to use this ride's virtual queue by setting up a return time at a kiosk outside the attraction. There is also a standard line, a Single Riders line and an Express Pass line (which is shared with the virtual queue). When waiting in line, you’re able to access Fast & Furious trivia games through the Universal Orlando app. 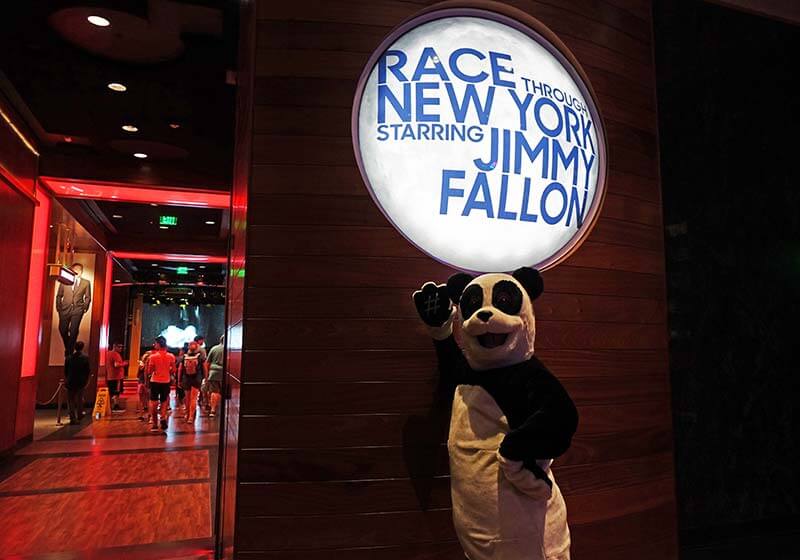 Out of the best queues at Universal Orlando, this one is the most unique. Race Through New York Starring Jimmy Fallon changed the waiting game by implementing Universal’s first virtual queue when it opened in 2017. When you’re at the park, you can reserve a time slot at a kiosk outside the attraction or through the Universal Orlando app. You can roam around the park until it’s your return time.

As soon as you’re inside, you’re given a color-coded card on the first-floor lobby. While you're here, you can take a look at the history of "The Tonight Show" and its hosts throughout the years. When the color of your ticket is illuminated in the lobby, you can go upstairs to a second waiting area known as the Studio 6B Club. You can relax on comfy couches, watch clips from "The Tonight Show" or play a racing-style video game called “Jimmy Drive.” They’re not always there, but you might also catch a live performance from The Ragtime Gals or a meet-and-greet with Hashtag the Panda. Once the lights turn the same color as your ticket again, there's a short line before entering the ride’s flying theater. 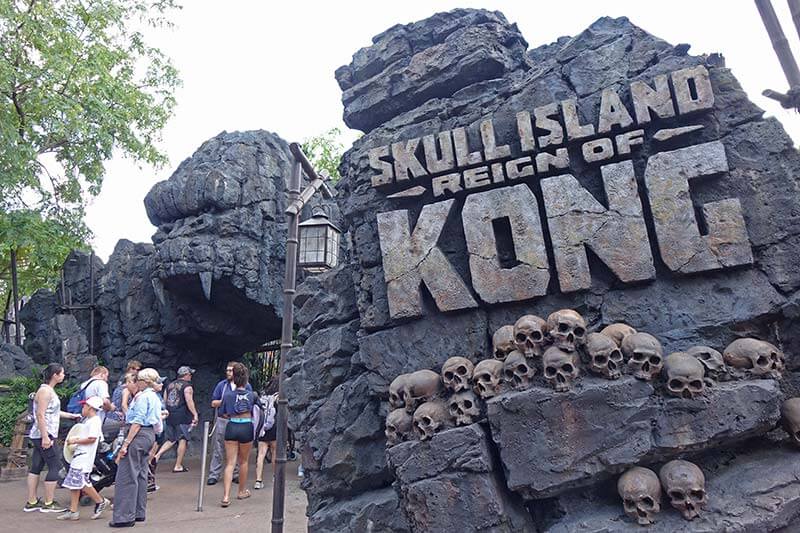 If you thought the Revenge of the Mummy queue sounded creepy, Skull Island: Reign of Kong takes it to a whole new level. As you might expect, the queue is lined with hundreds of skulls, as well as spooky skeletons. One particular room features an animatronic shaman who’s eerily chanting in the middle of a giant skull illuminated by fiery effects. Before you hop on the ride, you face another terrifying animatronic — an enormous slug-like parasite with rows of teeth.

But that’s not all! The best (or maybe, worst for some) part of the queue happens to be the hidden scare actor. Yes, you read that right. You never know if a native of Skull Island will pop out to scare unsuspecting riders. Sometimes the native will scare the daylights out of my dad. But other times, there are no jump scares at all. For this reason, Lily and Mommy Frog usually sit this ride out.

2. Harry Potter and the Escape from Gringotts 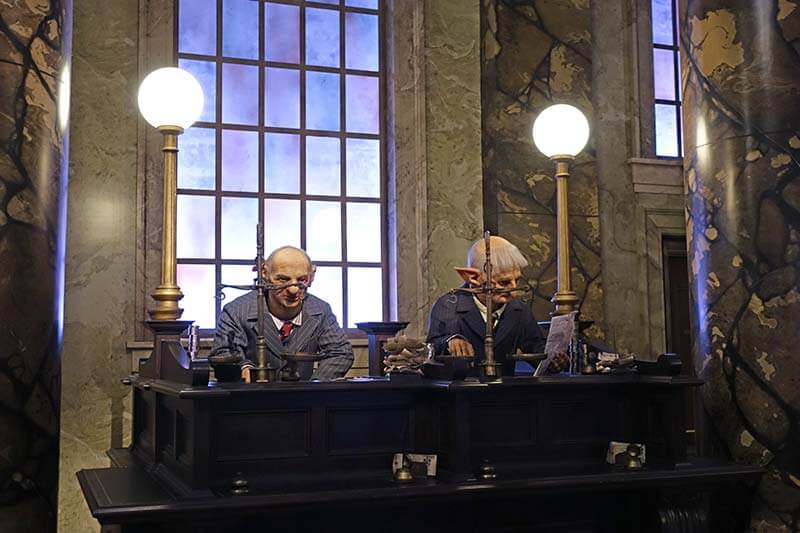 In the Harry Potter series, Gringotts is the Wizarding World goblin-run bank located at Diagon Alley. The ride’s queue recreates the grand marble lobby, as seen in the films. Once you enter the queue, you see massive chandeliers and extremely detailed animatronic goblins working behind long counters. As you move past the lobby, you’ll walk by vaults, offices, newspaper clippings — and even the shadows of Harry, Ron and Hermione.

There’s a short pre-show that sets up the ride’s story in Bill Weasley’s office with the eldest Weasley sibling himself and Blordak, a goblin employee. (The ride's storyline ties in with Harry, Ron and Hermione's break-in attempt in "Harry Potter and the Deathly Hallows"). Fellow Potterheads, see if you can spot the moving Weasley family portrait near the bottom left of the scene! After you pass a guard who appears to be under a sleeping spell, you step inside an elevator simulation that truly makes you feel like you’re plunging miles underground. Finally, you’ll ascend a spiral staircase that leads you to your magical cart with hanging stalactites above.

1. Harry Potter and the Forbidden Journey 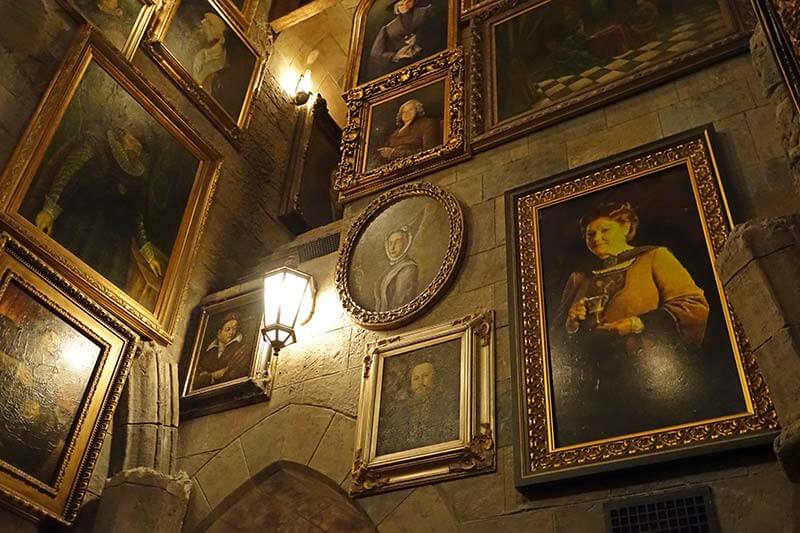 I don’t think there’s anything more magical than stepping inside the Hogwarts castle for the first time. Universal Orlando knocked it out of the Quidditch pitch! With a little help from the film series’ art design team, Hogwarts is fully brought to life. The journey through the castle starts outside at the school’s greenhouse where Herbology lessons take place (don’t worry, there aren’t any mandrake screams that will kill you). Once you enter the castle, you’ll pass by the giant hourglasses that keep track of House points and the griffin statue that guards Dumbledore’s office.

The Portrait Gallery features moving portraits of the Hogwarts founders and dozens more. Listen closely to their conversations about Hagrid losing a dragon and how Hogwarts has opened its doors to muggles for the first time. Next, you’ll pass through Dumbledore’s office and his lifelike projection will talk to you. Similarly, Harry, Ron and Hermione greet you in the Defense Against the Dark Arts classroom. Be on the lookout for props used in the films in these incredibly detailed rooms! You’ll also encounter the Fat Lady portrait and the Sorting Hat at the end of the captivating queue.

Do you agree with my ranking of the best queues at Universal Orlando? If you'd switch or replace one, share it in the comments below!

Related: Ultimate Guide on When to Use Universal Express Pass