The Ultimate Gamer's Guide to Disneyland 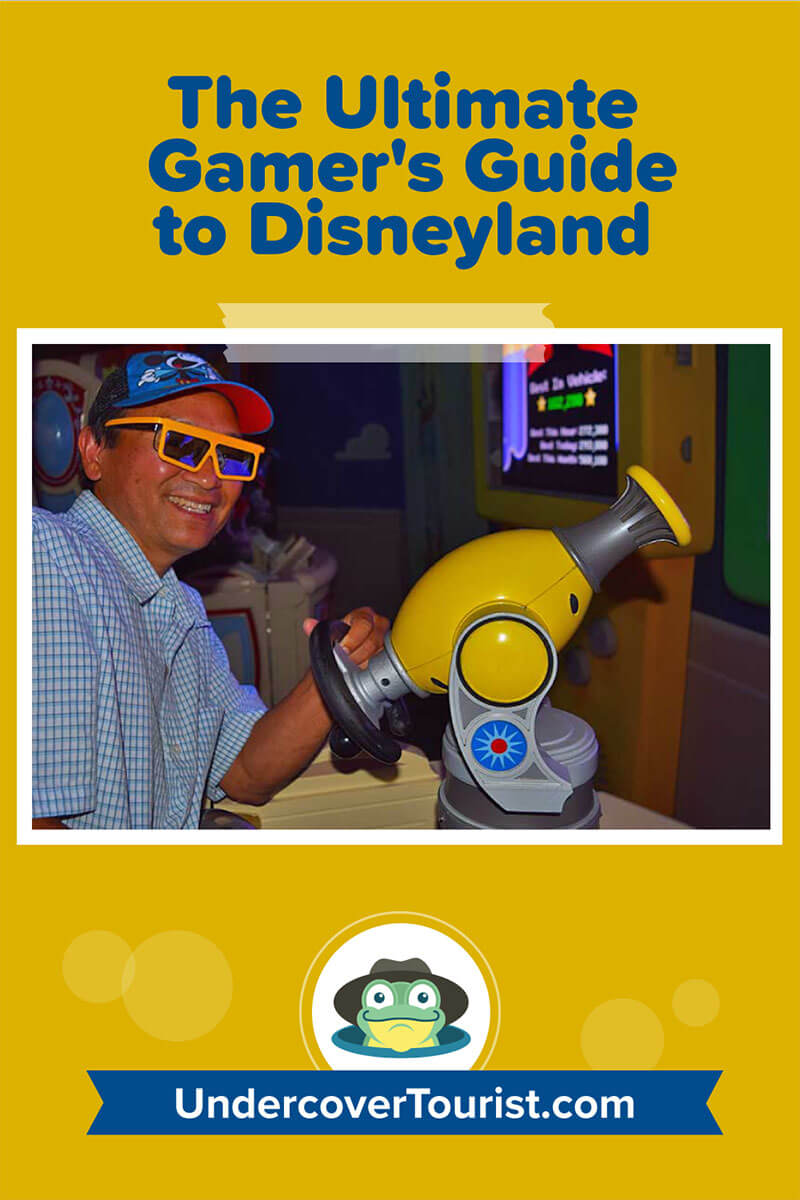 Attention gamers of all ages! If you love to play games (video games, shooting games or even carnival games), you’ll want to know where you can test your skills at Disneyland. If you are a parent of a gamer, here’s what you need to know to keep your kid connected and engaged with you at Disneyland. You just might have some fun playing too! The good news is that there are several Disneyland games and ways to keep your gamer entertained at the Disneyland Resort. There is even a new ride in Avengers Campus that will get you into the spirit of family competition!

Let's hop to it and check out all the rides, games and experiences available to level up your Disney game! 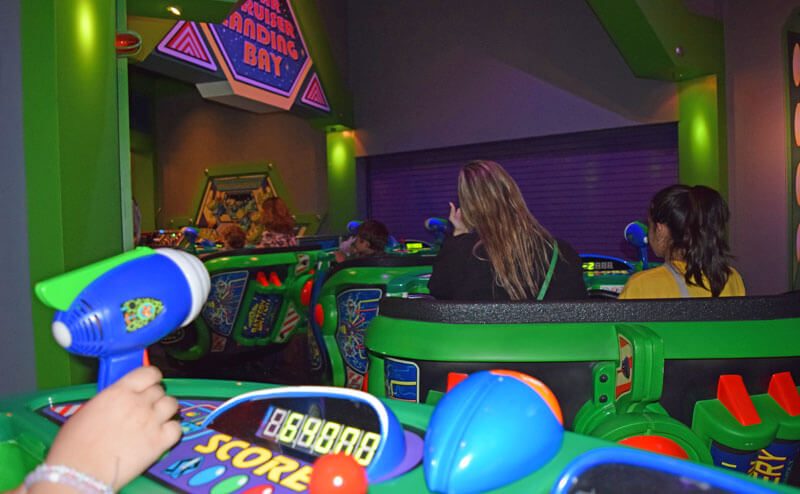 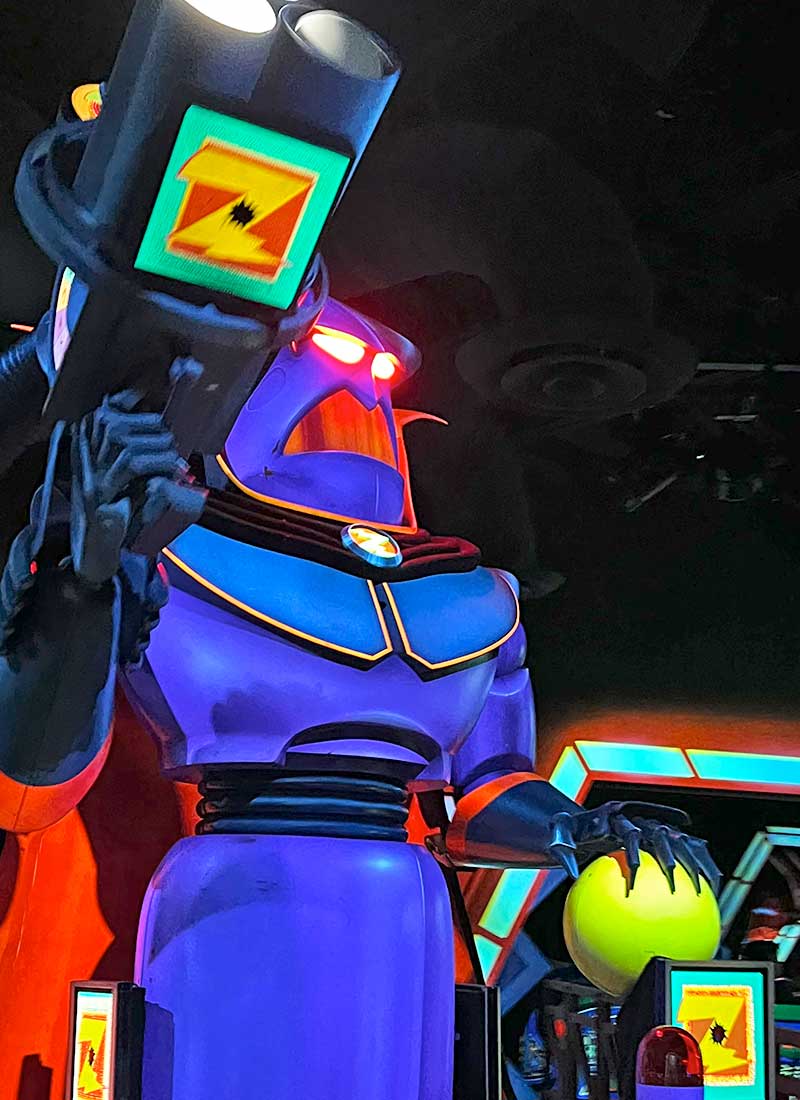 This Disneyland ride/shooting gallery utilizes lasers to defeat the evil Emperor Zurg. The targets have different values, so do your research before heading to the park.

When shapes light up, they are worth 10 times their regular point values, but only for the first person to hit them, so shoot quickly and accurately!

There are a lot of tips online on how to score higher (such as sit on the left, make sure to fire repeatedly at the same target and keep shooting even if the ride stops). Each room has valuable targets hidden in plain sight. But there are some hidden targets as well. Aim for a spot (it's a tiny hole) a few inches below the Z in Emperor Zurg’s chest worth 50,000 points. You just have to know where to look for targets (even the dark tunnels have targets with lights going across them)! After the ride, you can register your score at the kiosks and email yourself a photo. That makes a fun, free souvenir! 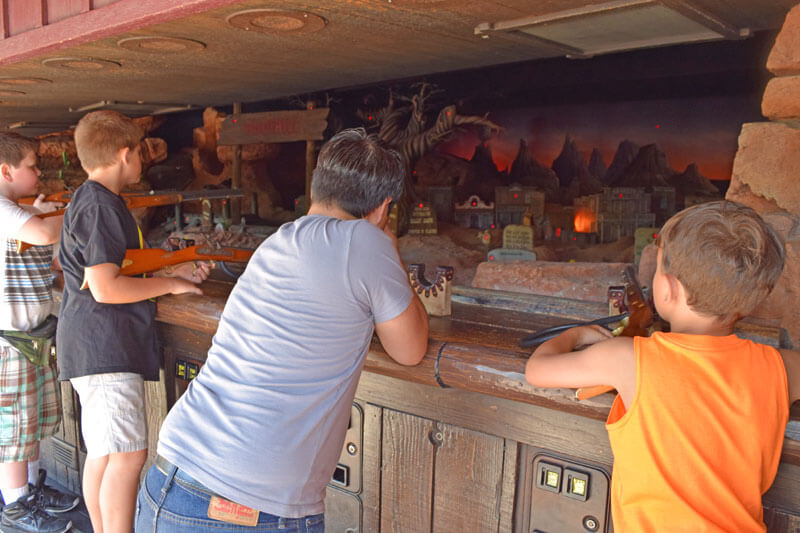 If you love shooting games, this western shootin’ gallery is old school cool. Moms of cowboys and cowgirls will be happy to know that the rifles shoot an invisible beam of safe infrared light. When you hit your target, you will be rewarded with lights, sounds and animations. This attraction requires a fee, and each credit is worth 25 shots. You can aim at stationary and moving targets straight out of the Old West. Yeehaw! 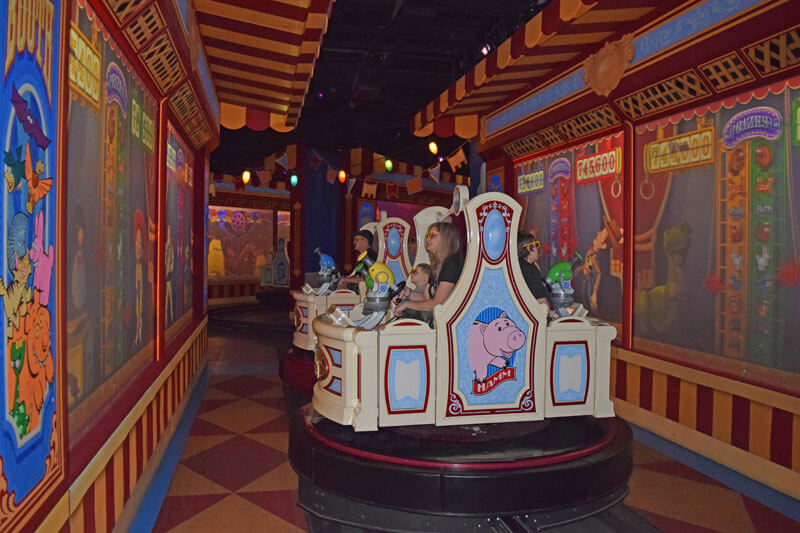 Toy Story Midway Mania in California Adventure is a fave for gamers (and really, just about everyone). Serious gamers would get very addicted to it if the line were not prohibitive! Ride at Rope Drop and use Genie+ to book a Lightning Lane to skip the line. The 3D ride takes you through a series of five different games. Research the secrets to unlocking the higher point targets (hint: There are a lot of tips online, and it helps to work with a friend to unlock more points).

Here are a few tips:

In the first game, hit the horse in the barn and the animal on the roof. when the barn flips over you'll see mice popping up. Hit those. When the barn flips back over, you'll see 2,000 points popping up all over the screen. In the scene with the volcano and balloons, keep hitting the lava balloons until the volcano erupts with 500-point balloons. In the mine car game, hit all the mine cars coming at you, but take a second to hit the bat that comes down from the ceiling and then the 5,000-point bat that follows. 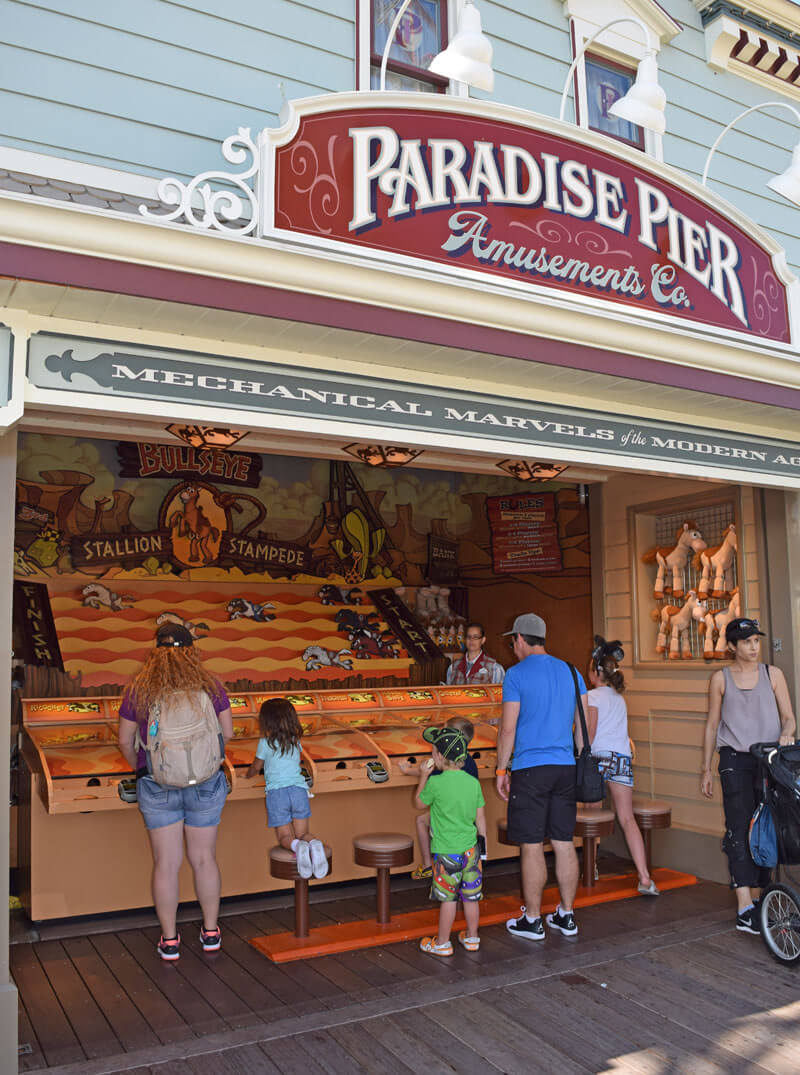 Just outside of Toy Story Midway Mania, gamers will find four old-fashioned, carnival-type games with themes from Pixar movies and shorts. You can play for real prizes, such as Pixar stuffed animals. But don’t worry about skill level. Even my little sister Lily has been known to take home a few prizes. The La Luna Star Catcher game is popular with little gamers because everyone’s a winner. That is always a win-win for toddlers and preschoolers. The other games are a little more challenging and test pitching accuracy, water-aiming skills and ball-rolling speed. The Frog Family likes to play WALL-E Space Race and Bullseye Stallion Stampede together to increase our shot at bringing home the prizes. If you have good aim, you can toss candy corn into Heimlich's hungry mouth.

To play, you’ll need to purchase a card with prepaid credits at a machine in front of the booths. Mommy Frog budgets some souvenir money for these games, which always earn us some prizes to bring home. 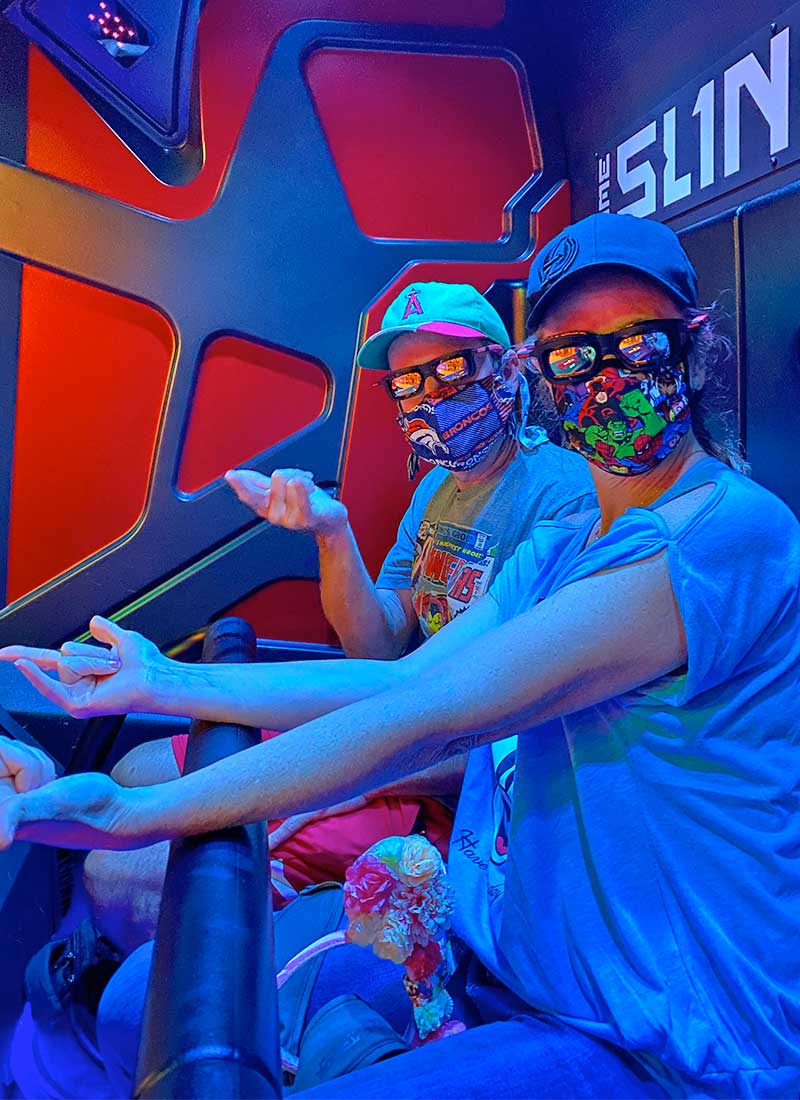 You can rack up points on this new 3D ride. How? With just your hands! You will help Spider-Man capture Spider-Bots that are taking over Avengers Campus by hopping in the WEB SLINGER vehicle, putting on WEB Vision goggles and slinging webs from your own wrists!

If you are the type of rider who always aims to get the highest score on rides such as Toy Story Midway Mania! or Buzz Lightyear's Astro Blasters, then you'll want to know how to score the most points. The colors of the bots indicate how many points they are worth:

But you also get points for teamwork and receive a team score. You can move and pull items and levers with your webs. You'll score much higher if you all work together. You can check the leader boards as you exit to see where you rank. There is also a score board in WEB Suppliers.

Want to enhance your game? You can purchase WEB Tech accessories that you strap on your wrist. They allow you to unlock multi-fire webs and personalize the game for a different experience. Read more about them in my super guide to Avengers Campus.

There is now a Single Rider line for this ride, making it easier to ride more than once a day. However, you have no control over your party and the final score at the end is a team score. It's best to team up with three other experienced riders and develop a strategy. My dad goes for volume, and I aim to hit as many gold and green bots as I can.

You can watch my video on our YouTube channel so you know what to expect.

The Play Disney Parks app provides a whole new way for guests to connect with their families and friends as well as with the park itself. This fun, free mobile app for iOS and Android can change the way you interact with your environment at Disneyland. You can play games, answer trivia questions, interact with park elements while in line, listen to Disney music, earn achievements and more.

Use the Datapad in Star Wars: Galaxy's Edge 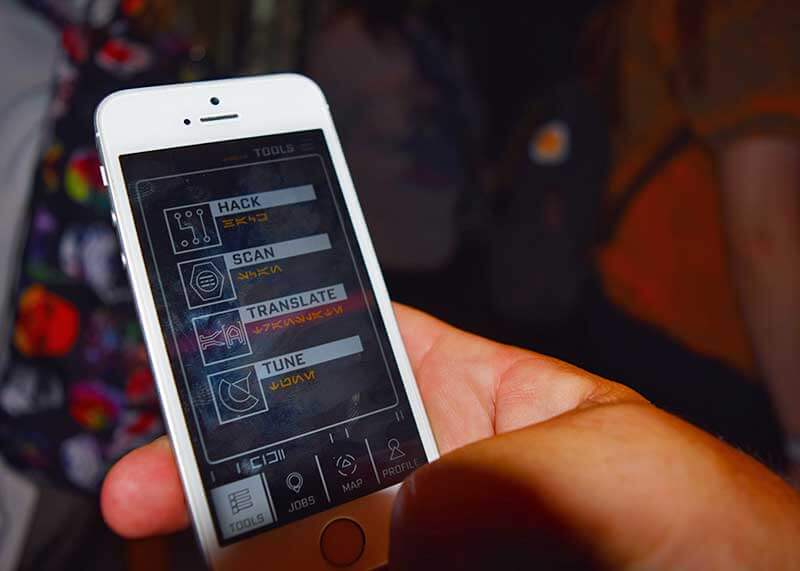 Here's the super cool thing: When you enter Star Wars: Galaxy's Edge, the Play Disney Parks app automatically turns into a Datapad. You can use your Galaxy's Edge Datapad throughout the alien land to hack, scan, translate and tune into transmissions from other parts of the galaxy. You could spend a few hours playing with the Datapad and maybe even interact with droids.

The experience can vary based on which side you choose to support in controlling the outpost. Are you part of the Resistance? Loyal to the First Order? Or a Scoundrel striking out on your own? If you are allegiant to the First Order, you can interfere with systems of the Resistance — perhaps forcing Chewbacca to push some button to sort it out. As a Resistance fighter, you can hack into the First Order surveillance system on door control panels, but don't get caught by the patrolling stormtroopers! You can complete jobs to collect digital rewards such as galactic credits, ship schematics, star maps and more. App users are able to track the points they earn on their missions aboard Millennium Falcon: Smugglers Run. 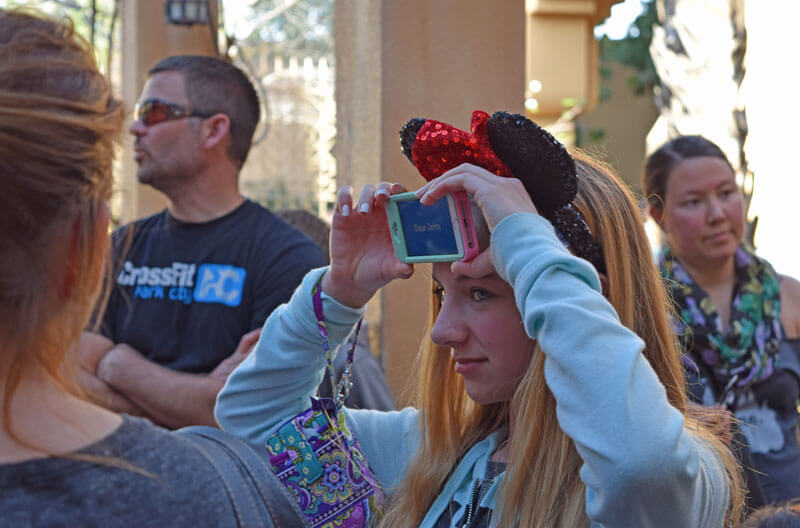 I offer one last piece of advice to gamers: Play with your friends and family members. You can play group games while waiting for rides or shows. A popular Disneyland game we see people playing in line is Heads Up! Make sure you play games with the people you are traveling with rather than playing games alone on your device. I mean, your parents did take you on this great trip and want to spend time with you, so include them and your siblings or friends in your games!

Another fun game that does not need any device is 20 Questions. You can even it make it Disney-themed. We like to pick a Disney character and the guessers cannot ask which movie he or she appears in. They have to figure it out in other ways. Is the character a female? Is she animated? Does she have magical powers? Is she a person? Does she have woodland critter friends? Is she evil? Can she talk? Does she live in Europe? When we hop over to Universal Studios Hollywood, we play Harry Potter 20 Questions. Games are a great way to pass the time (while still getting that quality time Mommy Frog loves).

I love playing all kinds of games, so I always enjoy hopping over to these great rides and Disneyland games when I am at the Disneyland Resort. If you are a teen or even soon to be one, check out my favorite things to do at both Disneyland and California Adventure. You might enjoy them too!

Related: Getting the Scoop on Disneyland Mobile Order Service