How to Conquer Halloween Horror Nights Orlando with Teens and Tweens 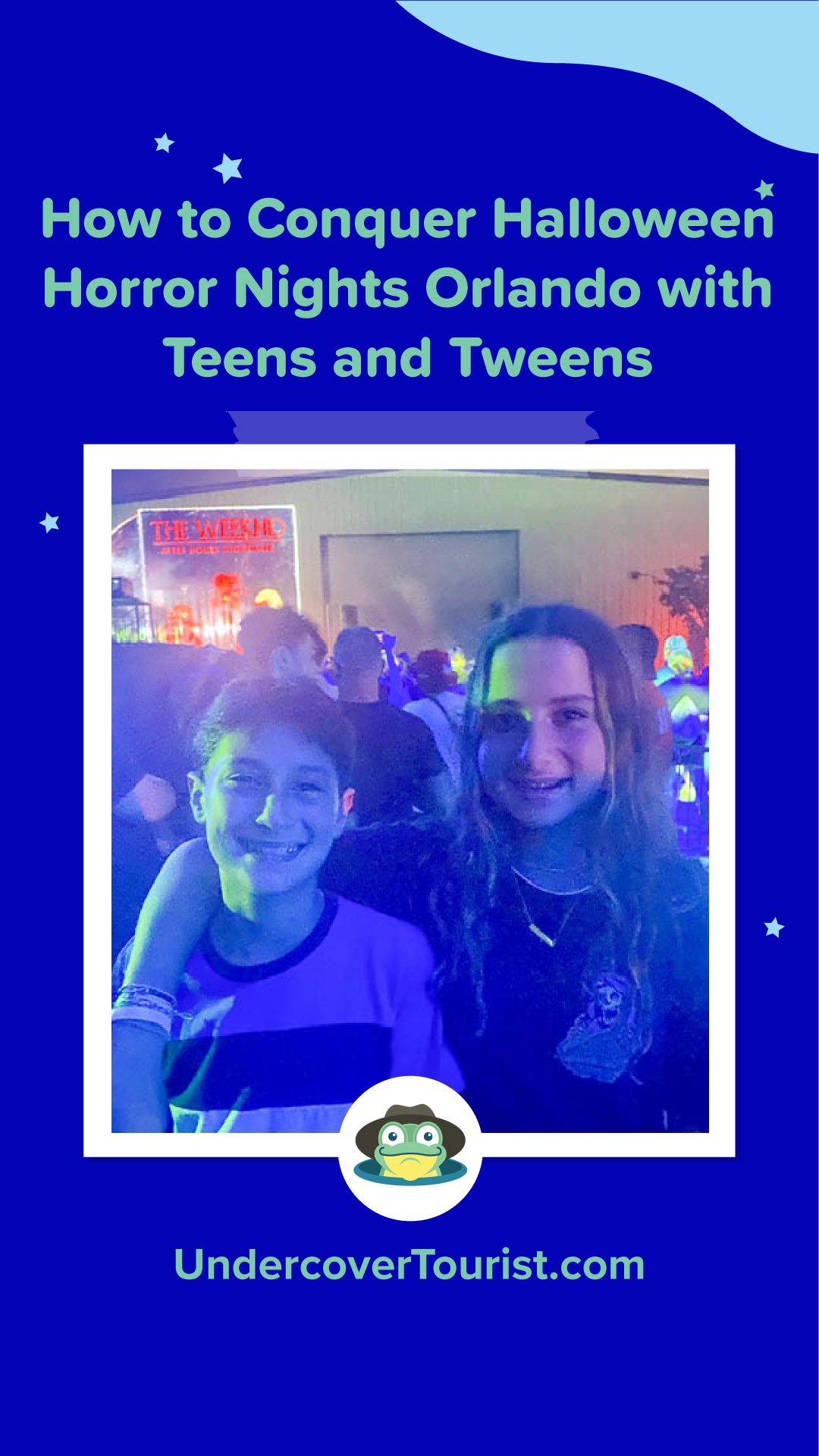 As our resident thrill seeker and film buff, Tad loves Halloween Horror Nights! He looks forward to seeing all the incredible details and epic scares that Universal Orlando Resort brings to life every spooky season. However, our first visit with him was definitely a teachable moment. Just because your tadpole thinks they're ready doesn't mean they're necessarily prepared for how intense this PG-13 rated event can be (or how late they need to stay up). Due to the nature of the event, Universal Orlando strongly recommends that only tadpoles ages 13 and up attend — and we'd have to agree!

That being said, this isn't a hard and fast rule — meaning younger tadpoles won't be turned away. If both your tween(s) and you believe they're mature enough, feel free to give them a night of good scary fun. If there's any hesitancy from either party, leave them at home and revisit the conversation when Fear's lantern is lit once again. If this is finally the year you're ready to take your tadpole along, then keep reading because Mommy Frog and I have put together our top tips for conquering Halloween Horror Nights with teens and tweens! 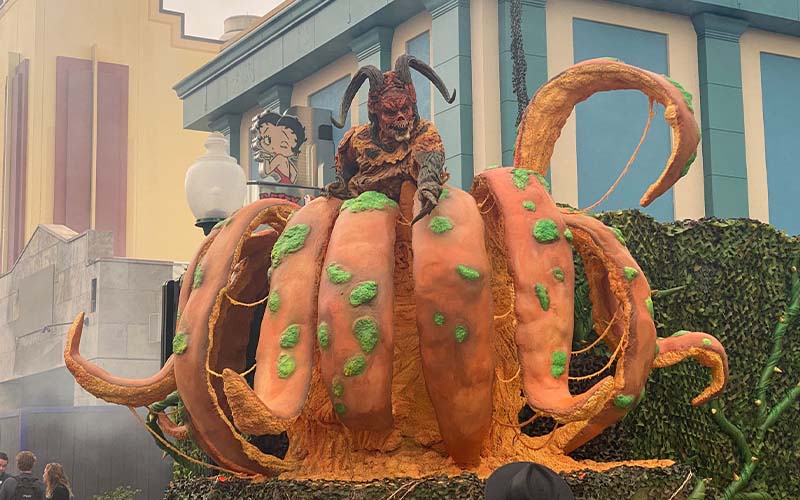 Everything is scarier in the dark. If you want to ease your tadpole into the terror, be there as soon as the gates open to take advantage of almost a full hour and a half of sunlight. Once your tadpole has seen the goblins and ghouls that stalk the streets in the daylight, the scare zones become much easier to walk through after the sun sets. Not only that, but houses are going to have some of the shortest wait times at the very beginning of the night, as well. (Lines are also super short at the very end of the night but, even though they're young and spry, don't expect that your tadpole has the stamina to make it all the way to 2 a.m.) Additionally, save some money for pizza fries by purchasing your event ticket through Undercover Tourist. Getting to the gates with your tickets already in hand will prevent you from having to wait in a long line at will call. (It also guarantees admission as some nights have already begun to sell out!) 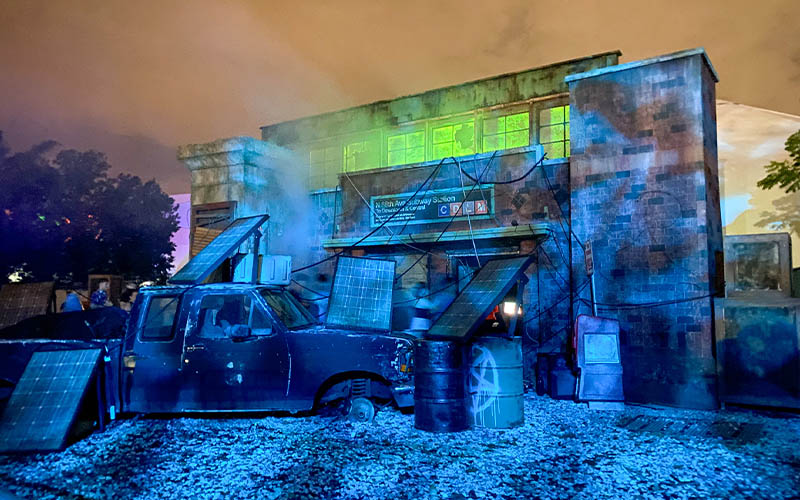 With their narrow hallways, low lighting and scares around every single corner (even in some of the most unexpected of places), the houses — as the headliners of Halloween Horror Nights — are undoubtedly the scariest part of the event. If your tadpole is still feeling a bit skittish, you may want to avoid them altogether. There are still five spooky scare zones, two thrilling shows and a bunch of devilishly delicious food to enjoy — not to mention, several rides remain open during the event! If it's your t(w)een's first time, sandwich them in between two adults as scare actors tend to target the first and last person in any "group." (Unlike other after-hours Halloween events, guests aren't pulsed into the houses at HHN. It's one steady stream of people.) The adult in front can also warn them what's coming up in the next room. 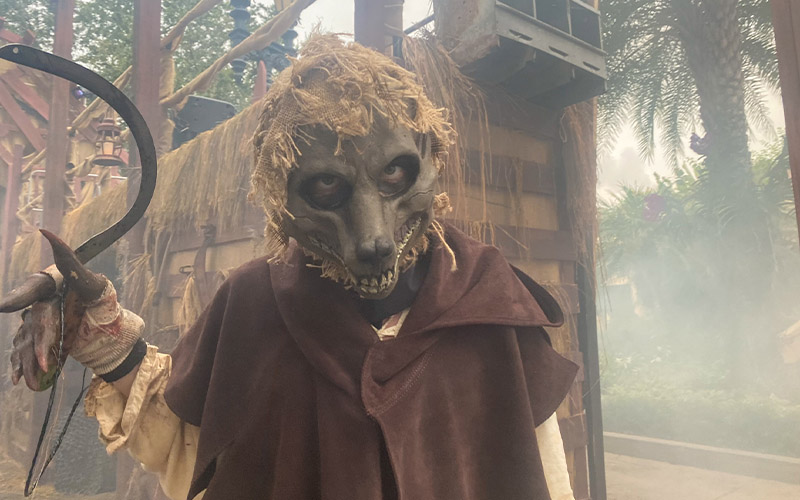 When it comes to the scare zones, know that scare actors like to set their sights on frogs who visibly look scared. That means the more you run or scream, the more likely you are to be chased around. Walk through the scare zones confidently and you'll be less of a target. I also highly recommend making eye contact with any and all scare actors. They like to sneak up on assuming frogs. To avoid them almost completely, stick to the sidewalks. The majority of scare zones are confined to the streets. It's also important to note that scare actors (whether in the houses or scare zones) cannot touch you ... just as you can't touch them.

Whether you decide to sit down for dinner, hop in line for a ride or even get some souvenir shopping done, there are several spots around the park that are completely scare-free. Even the entirety of Diagon Alley is open during the event with nary a scare actor in sight! If your teen or tween needs a moment to catch their breath, head to one of those spots. For a frame of reference, the scare zones are located in Production Central right in front of the Despicable Me Minion Mayhem, in New York right in front of the Tribute Store, Revenge of the Mummy and Sahara Traders, in San Francisco right in front of Fast & Furious - Supercharged and Amazing Pictures, in Central Park right in front of Cafe La Bamba and in Hollywood right in front of Universal Orlando's Horror Make-Up Show, Five & Dime and The Bourne Stuntacular. I also can't froget to mention that roaming chainsaws have returned this year, so ... few places (aside from London and Diagon Alley) are truly safe. You can definitely expect to find these roaring electric beasts in the area near Springfield and Woody Woodpecker's KidZone, as well as near Mel's Die-In and Transformers: The Ride-3D. 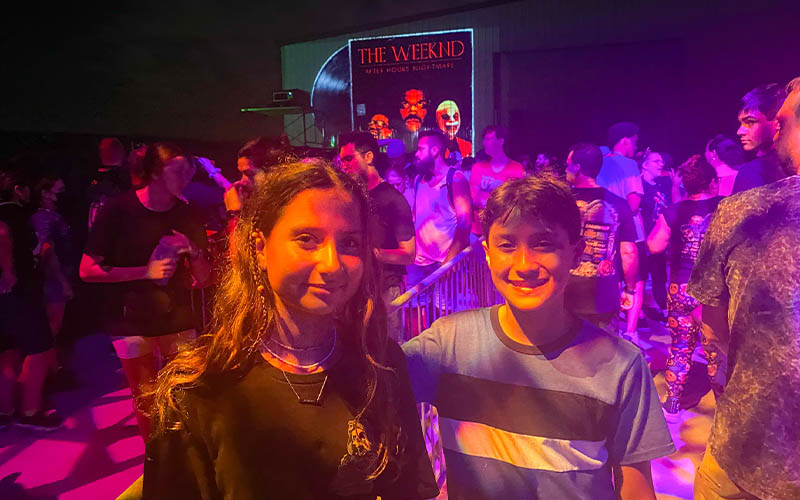 If you don't have an Express Pass, the chances of conquering everything (specifically, the houses) in one night are fairly slim. Lines get longer the later it gets. Make sure your teen or tween knows that you may not be able to hit everything beforehand, but also have a conversation with them prior to arriving and ask them what their priorities are. If they're not interested in the shows, feel free to skip them. If there are only a few houses they really want to get to, definitely hit those first. Also, while ride lines do tend to be significantly shorter during Halloween Horror Nights, make sure they know that the rides will still be there next time you go to Universal Studios, but the houses will not be. Prioritize anything exclusive to the event to really get your money's worth.

6. Get in the Spooky Spirit 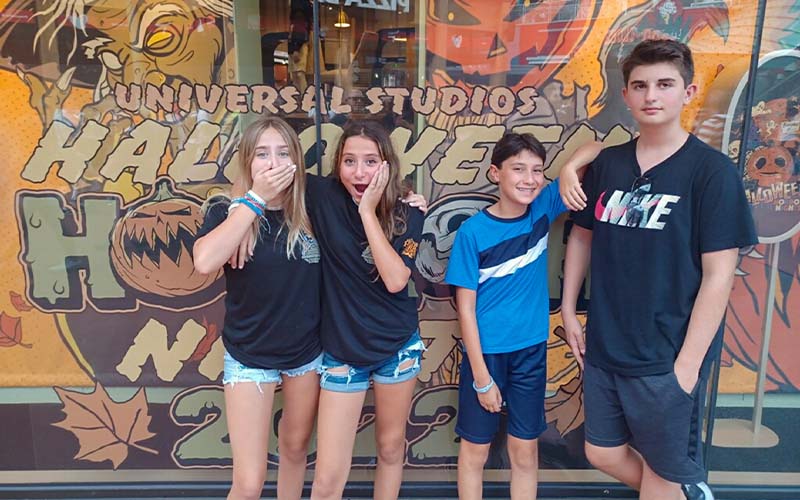 While masks and costumes aren't allowed at Halloween Horror Nights, we absolutely love seeing how fellow frogs strut their sinister style. Halloween-inspired make-up and accessories are more than welcome and a great way to get in on the fear-filled fun. We also love wearing shirts themed to some of the event's IPs. While this isn't necessary, of course, it does make for awesome Instagram photos and a fun way to get in on the spooky spirit before even entering the gates! (That being said, be sure to dress comfortably from head to toe. It's still fairly warm here in the fall so opt against long sleeves or pants and don't froget to wear shoes that you can easily spend all night walking around in.)

7. Do Your Prep Work 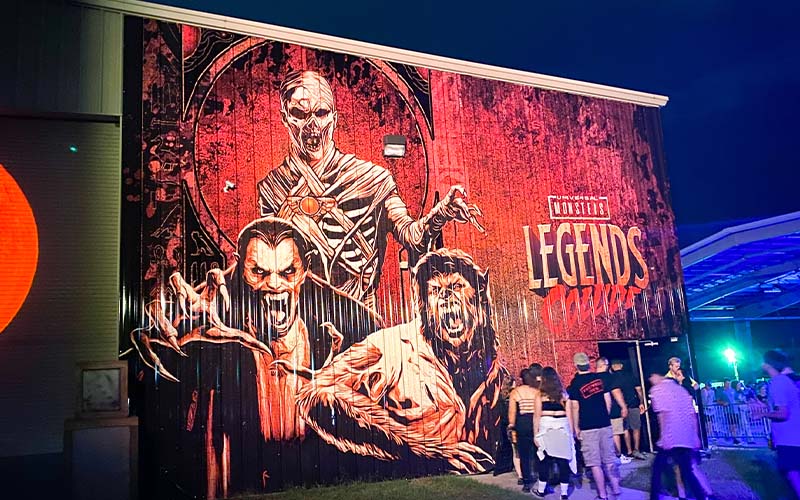 Another way to get excited before you even arrive on property is to watch any movies or TV shows that inspired some of the houses beforehand. Not only does this get you familiar with the IPs, but it also is a good determining factor for how much fear your tadpole can take. If they can't make it through the movie or show without shielding their eyes, it's probably best to avoid that particular house (or possibly the event altogether). Additionally, if you're not going opening night and don't mind spoilers, watch some house walk-throughs on YouTube. (We'll be adding more as the event goes on.) Knowing exactly what you're getting into is a perfect way to prepare and decide precisely what each member of your scream squad is comfortable doing.

8. Stay Close to the Screams

Whether you book a hotel on Universal Orlando property or a nearby partner hotel, staying close by is a lifesaver when everyone's exhausted at the end of the night. Universal Orlando Resort hotels are just a quick bus or water taxi ride away and many Universal partner hotels even have free shuttles! There are few things more blissful than being able to plop right into bed after you've decided you've had enough spooks for the night — especially if you don't have to worry about driving back to a hotel late at night. Additionally, frogs staying on property at a Universal hotel have access to a designated entrance which lets you circumvent those long lines at the gate and gets you into the horror faster. Not only that but Universal hotel guests also are granted exclusive access to the Universal Monsters Gallery of Legends at Universal's Cabana Bay Beach Resort, an immersive themed experience featuring The Wolf Man, Dracula and The Mummy hoppening from Sept. 2 to Oct. 31. It's a win-win-win! 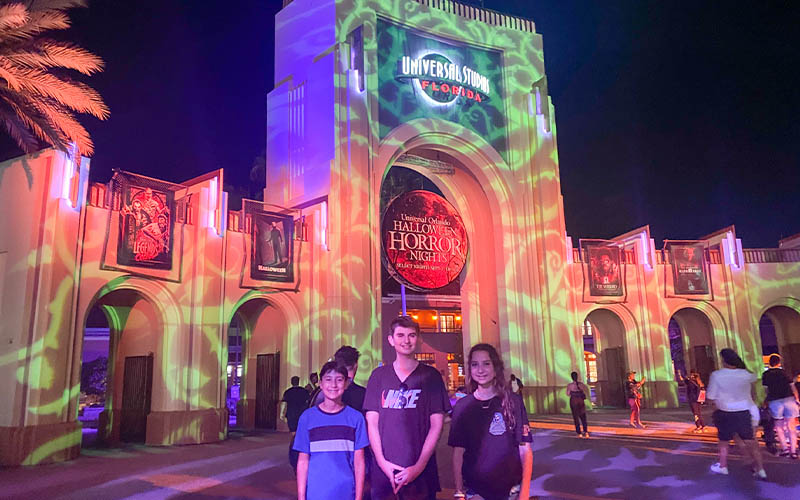 If your tadpole is dead-set on seeing as much as they can in one night, we can't recommend the Halloween Horror Nights Express Pass enough. Similar to the Universal Orlando Standard Express pass, it allows you to skip the line once per house during the night and is the only way you're just about guaranteed to see every house. If you're trying to be wallet-friendly, consider opting for the Scream Early Ticket which is only $35 per frog. This allows you to enter the park from 3 to 5 p.m. and then start getting in line for houses as late as 6 p.m. — a full half hour prior to the official opening time! Scream Early normally gets you into around two houses before Universal opens the gates and all the other frogs start flooding in.

Are you taking your teens to Halloween Horror Nights? What are they most excited to do? Let us know in the comments below!

SAVE $30 vs Guests gate price