'Sup! Universal's Islands of Adventure certainly lives up to its name. With eight unique sections of the park inside Universal Orlando Resort, you’re transported to the worlds of superheroes, dinosaurs and wizards ... just to name a few. There are so many rides to go on and places to eat, and plenty of play areas for the tadpoles. While you won’t want to miss the more popular attractions such as Harry Potter and the Forbidden Journey and the Incredible Hulk Coaster, I suggest also taking the time to check out some of my family’s favorite under-appreciated experiences. These spots would be toadally ideal to visit when you’re trying to escape from the crowds, the heat or the rain! So without further delay, here are our top five Islands of Adventure hidden gems! 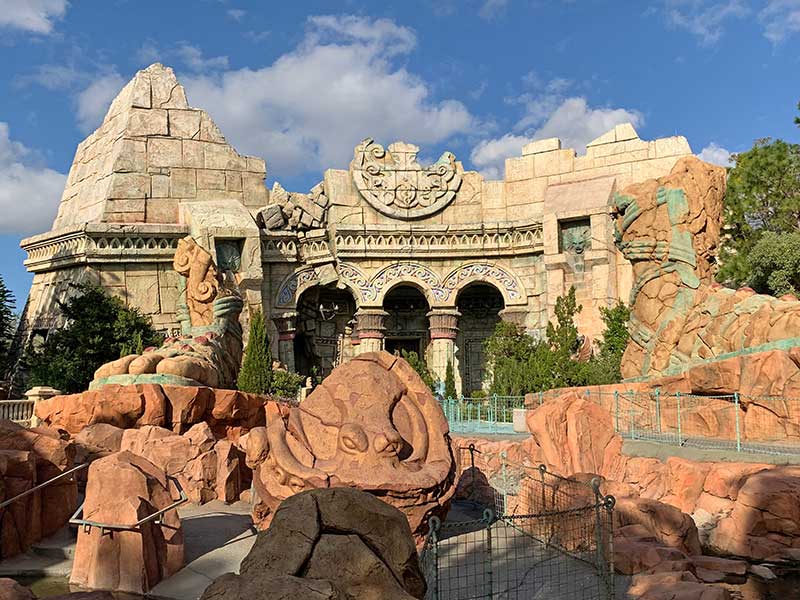 It’s hard not to notice the grand ruins of the Temple of Poseidon. The majestic facade is fitting for the ancient Greek god! While the exterior may not be hidden, an often overlooked attraction awaits inside. Poseidon’s Fury is described as a show, but it’s a lot more than just sitting down and watching actors. Led by Taylor the tour guide, you join in on the archeological expedition and walk deeper and deeper into the temple. Before you know it, you’re caught in the middle of a showdown between Poseidon himself and villainous Lord Darkenon. While the plot is a little cheesy, trust me, the special effects toadally make up for it. The show even uses over 200 individual flame effects! However, the water vortex tunnel is hands-down the coolest part of the entire production. If you’re not the tallest frog (sorry, Mommy Frog!) or have tadpoles, we’d recommend staying close to the front of the group so you don’t miss any of the action since it is a walk-through attraction. 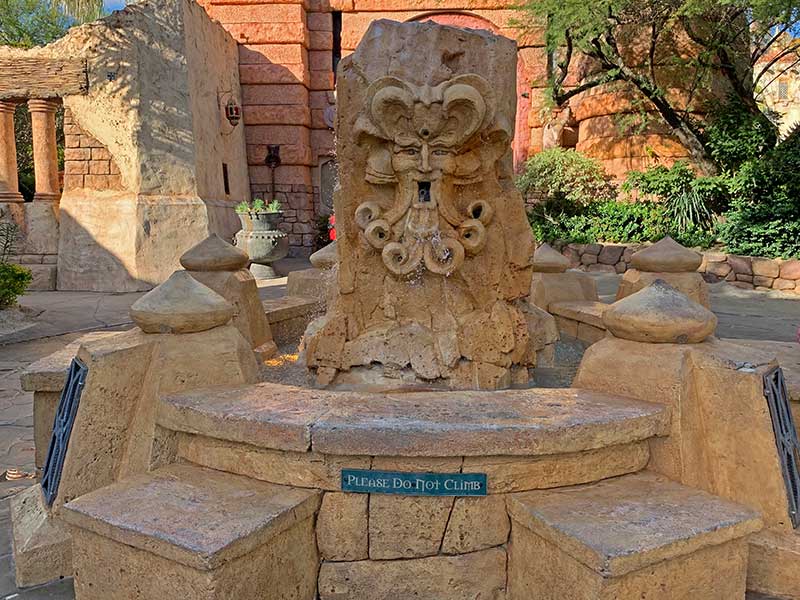 The Mystic Fountain is no ordinary fountain. It sits inconspicuously in Sinbad’s Bazaar, but it’s home to a mischievous spirit that, when awakened, talks to passersby. You’ll know it’s sleeping when you only hear the fountain bubbling, but if you stick around and it wakes up, have a fun conversation with the feisty fountain. It can play music, tell jokes or ask you to solve riddles. If you answer incorrectly, watch out! You may get splashed. Let the fountain know if it’s your birthday, and it’ll celebrate with you. Younger tadpoles will especially love this one! 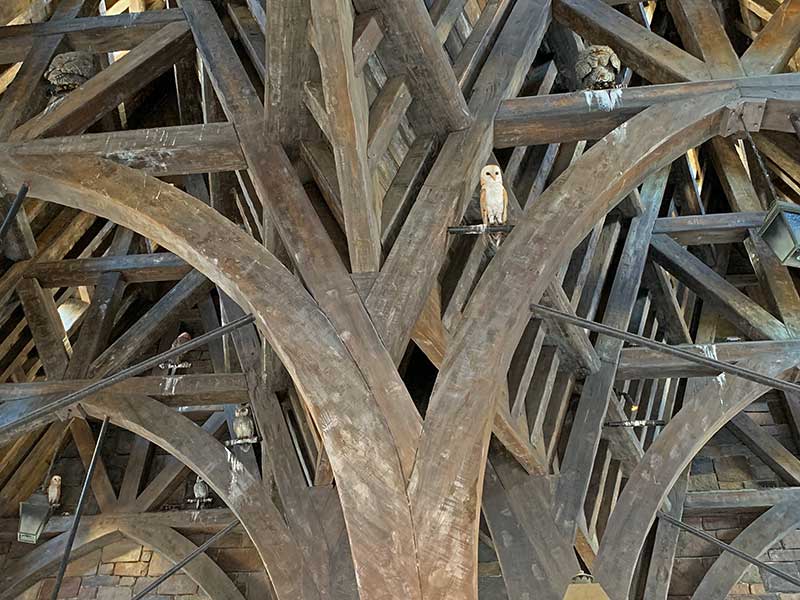 Are you still waiting on your Hogwarts acceptance letter? If you think the owl must have gotten lost on its way during delivery, you can pay the Owlery a visit inside the Wizarding World of Harry Potter - Hogsmeade! Follow the cooing and hooting, and you’ll spot the Owlery next to Ollivanders. There are plenty of benches for you to rest and sip on a frozen butterbeer while you muggle-watch. Take a look up in the rafters where you’ll see dozens of lifelike owls … and even owl poop!

The secret part of the Owlery is that you can actually send letters and postcards through the Owl Post. The little shop sells official stationery and postage stamps, or you can bring your own already stamped envelope. When mailed through the Owl Post, it’ll receive a special Hogsmeade postmark! Just be sure to leave enough room if you’re writing on a blank postcard. You can have a team member stamp it beforehand. When ready, it’s given to the owls, who will deliver your mail back home or to your family and friends. 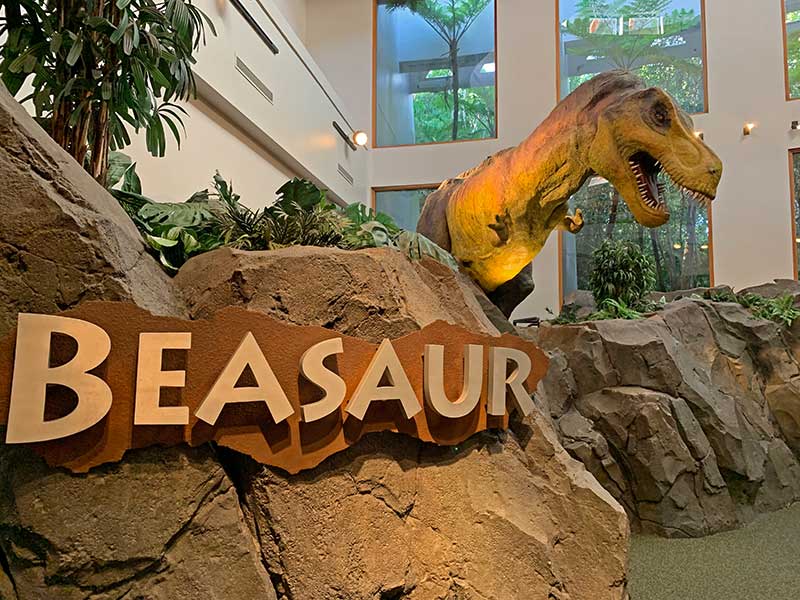 After hopping over the bridge from Hogsmeade to Jurassic Park, you’ll quickly come across the Jurassic Park Discovery Center, which is a real-life version of the film’s Visitor Center. Unless you take a side path to the front of the building, the main walkway will pass the back entrance (that’s how we first found it). It’s lumped together with a restaurant and a gift shop, and you’ll enter on the second level. Go downstairs to find the main interactive play center and educational exhibits, which are suitable for all ages. Just be aware that it is only open from 10 a.m. to 5 p.m.

The Center offers many fun activities, including the Beasaur (“Be-a-saur,” get it?) that allows you to see through the eyes and listen through the ears of a dinosaur. You can also “combine your DNA” to see what kind of dinosaur you would be, or test your knowledge by playing a trivia game. Lily’s favorite spot is the nursery, where you may be lucky enough to watch a Velociraptor egg hatch!

Islands of Adventure Hidden Gem #5: Me Ship, The Olive 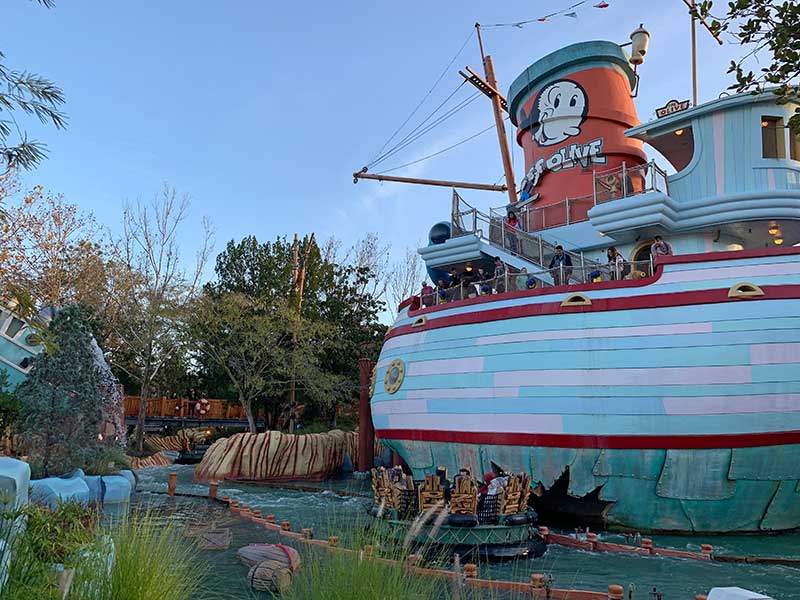 Kids come for playtime, while adults come for the views. Me Ship, The Olive is a three-story play area inside a colorful, cartoon-like ship designed after Popeye’s boat. You can steer the wheel, climb on cargo nets and zoom down a tall slide. On the second level, be sure to play the tiny piano. If you hit the colored keys in the correct order as it’s shown on the sheet music, it’ll play a musical surprise! Best of all, tadpoles and adults alike can use the free water cannons on the second deck to spray the unsuspecting rafters of Popeye & Bluto's Bilge Rat Barges riding down the river below. For the best panoramic views of the park, stand on the third deck or walk along the secluded trails that curve behind the ship.

We’re hopful that these hidden gems will give you a break during a busy day at Islands of Adventure! If you've found any other secret spots, please share them with us in the comments below.