A Quick Dip Inside the Best Orlando Water Parks 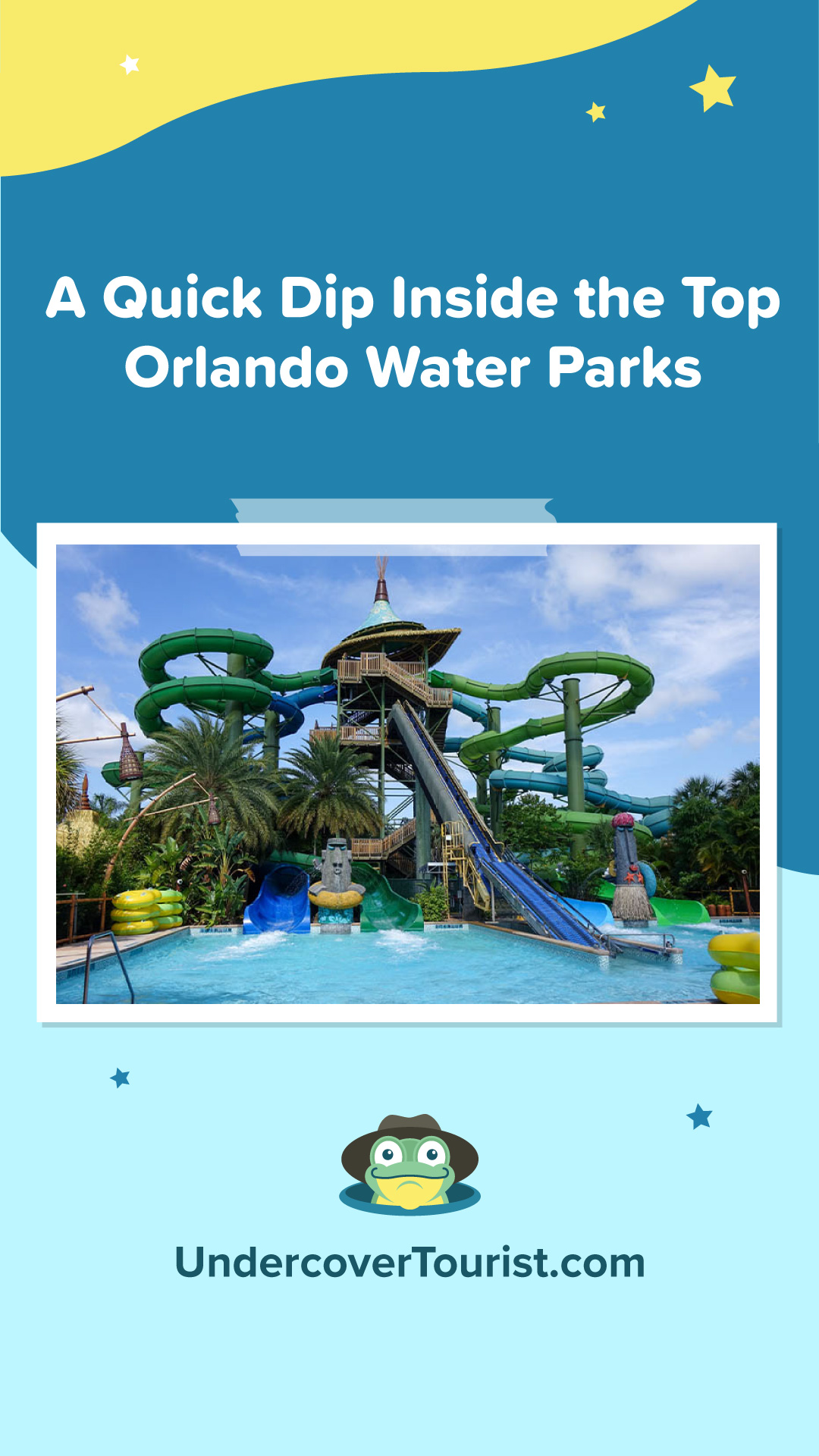 Because of Florida's nearly year-round warm temperatures, we're lucky that cooling off in the frog pond is easy peasy. That said, sometimes we like some excitement with our swimmin'. There's no better spot for that than one of the Orlando water parks! Enjoy the beautiful sunshine as you float in a tube down a lazy river or take on a thrilling water coaster. Just don't froget your sunscreen!

We've put together this summary of Orlando's best water parks to help you plan a splashin’ good time. As we always say ... for a great Orlando vacation, just add water!

The Frog Family's Take on the Top Orlando Water Parks 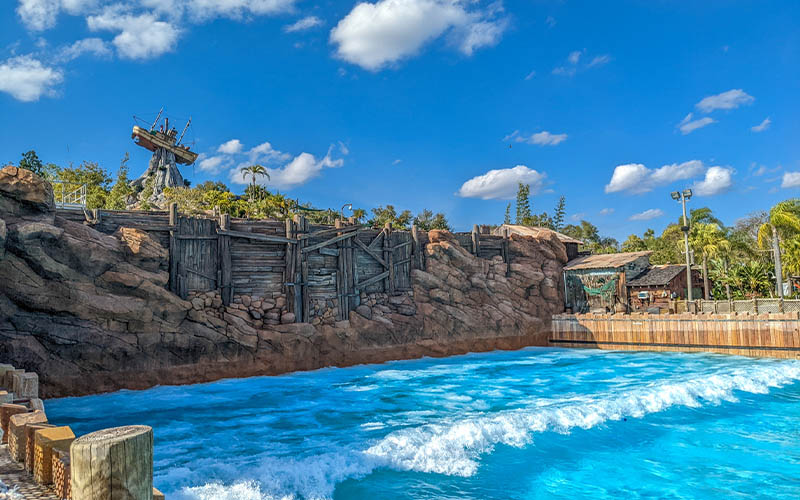 Theme: Legend has it that Disney’s Typhoon Lagoon Water Park was created during a huge storm that flung surfboards into the trees and tossed boats onto roofs. The storm’s force impaled Miss Tilly, the centerpiece of the park, on the top of Mount Mayday.

Frog Family Opinion: The first of Disney's two water parks, Disney’s Typhoon Lagoon Water Park is great for the whole family, especially the little ones. The sandy beaches and palm tree-lined paths transport you to a tropical lagoon filled with fun. Lily loves Ketchakiddee Creek, where there are many different activities with kid-sized slides and fun water features. Not to be left out, tweens and teens will still have lots of fun on thrill slides such as Crush ‘n’ Gusher Water Thrill Ride and Humunga Kowabunga. The park's most recent addition, Miss Adventure Falls, is a family raft ride that sends riders down a treasure-filled slide. Check it out here:

After debuting in 2018, H20 Glow Nights became a summer tradition. It returned in 2019, and was scheduled for 2020 before the COVID-19 closure hoppened. We were so hoppy that this after hours event returned with a splash in 2022 and can't wait to return next year! This separately ticketed event brings the water park to life at night with special lighting effects and DJ dance parties.

Bottom Line: Disney's Typhoon Lagoon is always at the top of our must-do list on an Orlando vacation. The play areas and kids' slides are great, and the landscaping and theming are amazing. Even better, it's affordable with the Disney Park Hopper Plus Option. 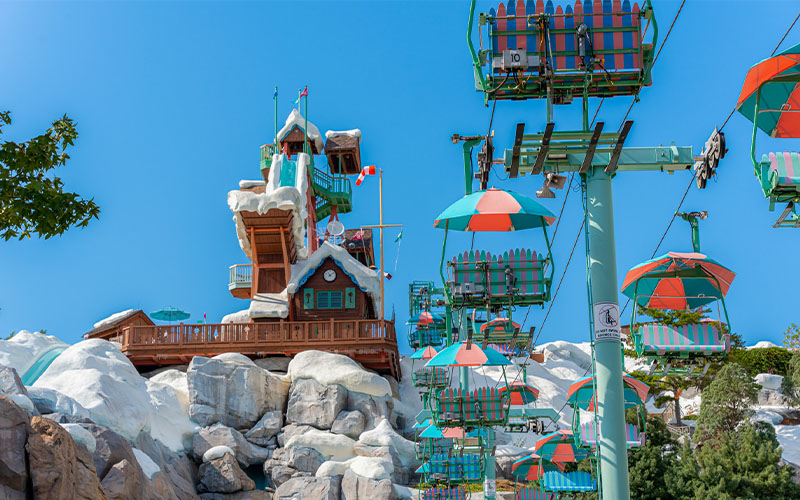 Theme: As Disney tells it, there was a freak snowstorm over Orlando that resulted in the construction of a ski resort complete with slalom courses and toboggan slides. When the snow melted, it made for a perfect water park with a ski theme ... Disney’s Blizzard Beach Water Park!

Frog Family Opinion: Of Disney’s two water parks, this one is geared more toward the bigger tadpoles in the family. Disney’s Blizzard Beach Water Park has more slides with height restrictions than Disney’s Typhoon Lagoon. Tad loves this water park and thinks the ski-resort theme is awesome. After all, it's the only snow you get to see in Florida! His favorite thrill slides are Summit Plummet and Downhill Double Dipper. He also enjoys going head-to-head with the other seven competitors on Toboggan Racers. That said, there are PLENTY of activities for the little ones. Lily loves Teamboat Springs and chilling out on Cross Country Creek.

Bottom Line: The lines at Disney’s Blizzard Beach Water Park may be long, but the thrill slides and ski-resort theme make them worth it. It's easy to experience Blizzard Beach and Typhoon Lagoon with the Disney Park Hopper Plus Option. 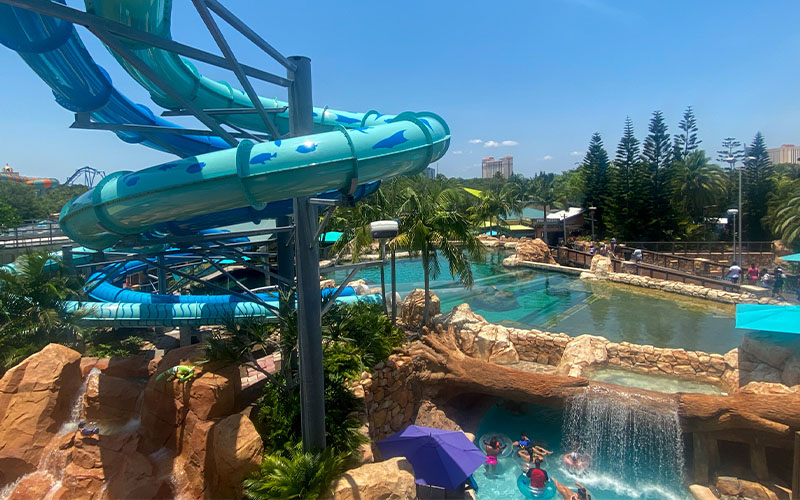 Theme: This SeaWorld Orlando water park is inspired by the South Seas and the animals that live there. The wildlife and culture is woven into every aspect of the park.

Frog Family Opinion: Aquatica is one amazing water park! Where else can you zip down an enclosed slide with real dolphins swimming alongside you? Aquatica is absolutely abundant with tropical theming, slides and activities for all ages. Tad loves racing his dad, Leap, on body slides such as Taumata Racer. I have fun on Ihu’s Breakway Falls drop slide. The entire Frog Family loves the tube rides we can enjoy as a family such as Walhalla Wave and Ray Rush. When we need a break, we rent a cabana for some shade and mid-day naps.

Bottom line: The live animal interactions — DOLPHINS, YO — make Aquatica one of our favorite Orlando water parks. There are several ticket options to visit Aquatica and all of SeaWorld Orlando parks. 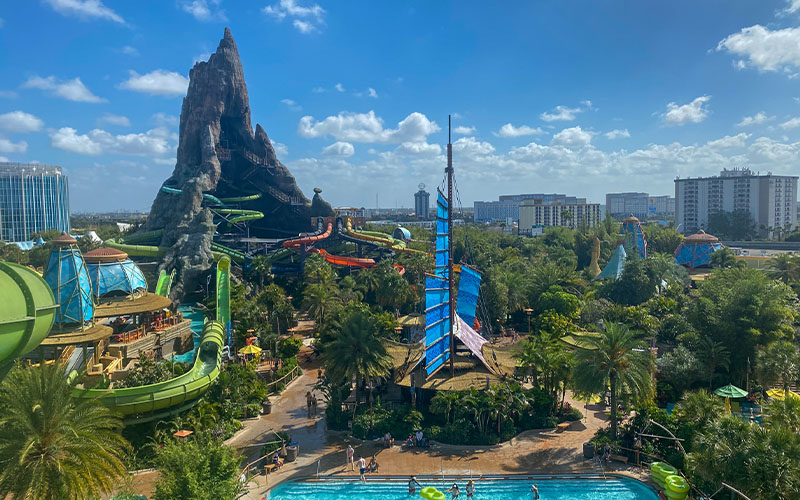 Theme: Legend has it that the fictional "Waturi" people discovered this tropical paradise on the edge of the world with the help of a mystical fish after traversing the ocean in search of a new home. The volcano itself has a backstory that begins with fiery god Krakatau, who couldn't contain his adventurous daughter, Tai Nui, who fell in love with local native Kala. Krakatau banished Kala to the moon, and Tai Nui's grieving tears became the sea. Seeing his daughter's heartbreak, Krakatau sought to make amends, reuniting the young lovers by pulling the earth to the sky. His rage and jealousy remain inside the volcano.

Frog Family Opinion: Universal's first water theme park is a tropical-themed paradise. We have a full guide to Universal's Volcano Bay that completely covers this park. With the 200-foot Krakatoa volcano as its centerpiece, this park caters to thrill-seekers as well as little ones. With four themed areas, each one offers thrills and tamer experiences. Yours truly braved the Ko'okiri Body Plunge, which drops you from a trapdoor down a 70-degree tube through 125 feet of slide. Lily can't get enough of Runamukka Reef, while Leap loves the Maku Puihi Round Raft Rides. Tad's favorite is the Karakau Aqua Coaster, a raft ride that pulls you uphill and through the volcano. Check out this ride in Tad's video:

Bottom Line: We love the theming, design and thoughtful details that make it easier for families to spend their day in this park. We definitely think hopping over for an hour or two in the daytime or in the evening during your visit to Universal Orlando Resort is the way to go. Here are all of the Universal Orlando ticket options so that you can start planning a toadally awesome visit for the whole family! 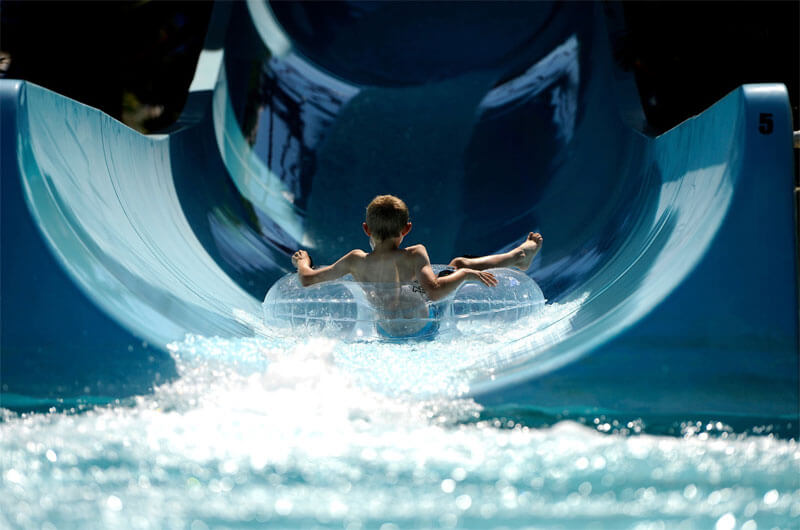 Theme: This water park “within the park” continues the same primary color brick theming as its namesake.

Frog Family Opinion: For the family LEGO fanatics (every family has at least one, right?), LEGOLAND Water Park is on the must-do list in the warmer months (hours scale back during the school year and cooler months). Where else can you build a one-of-a-kind raft out of soft LEGO bricks and then float down a lazy river on it? There are also a number of family-friendly activities, as well as the Splash Out speed slides and Twin Chasers tube slides that Tad gets a thrill out of. The park's most recent attraction — Creative Cove — lets you build and race your own LEGO boat. That's ... awesome!

Bottom line: This is an affordable add-on, especially if you are already planning a visit to LEGOLAND Florida.

Have questions about any of the water parks or want to tell us which one you think is the best water park in Orlando and why? Drop us a line in the comments below!

Related: Guide to the Disney Park Hopper Plus Option

SAVE $54 vs Gen. Admission gate price