GET THIS DEAL! SEE ALL OFFERS

A Scaredy-Frog's Guide to Halloween Horror Nights at Universal Orlando 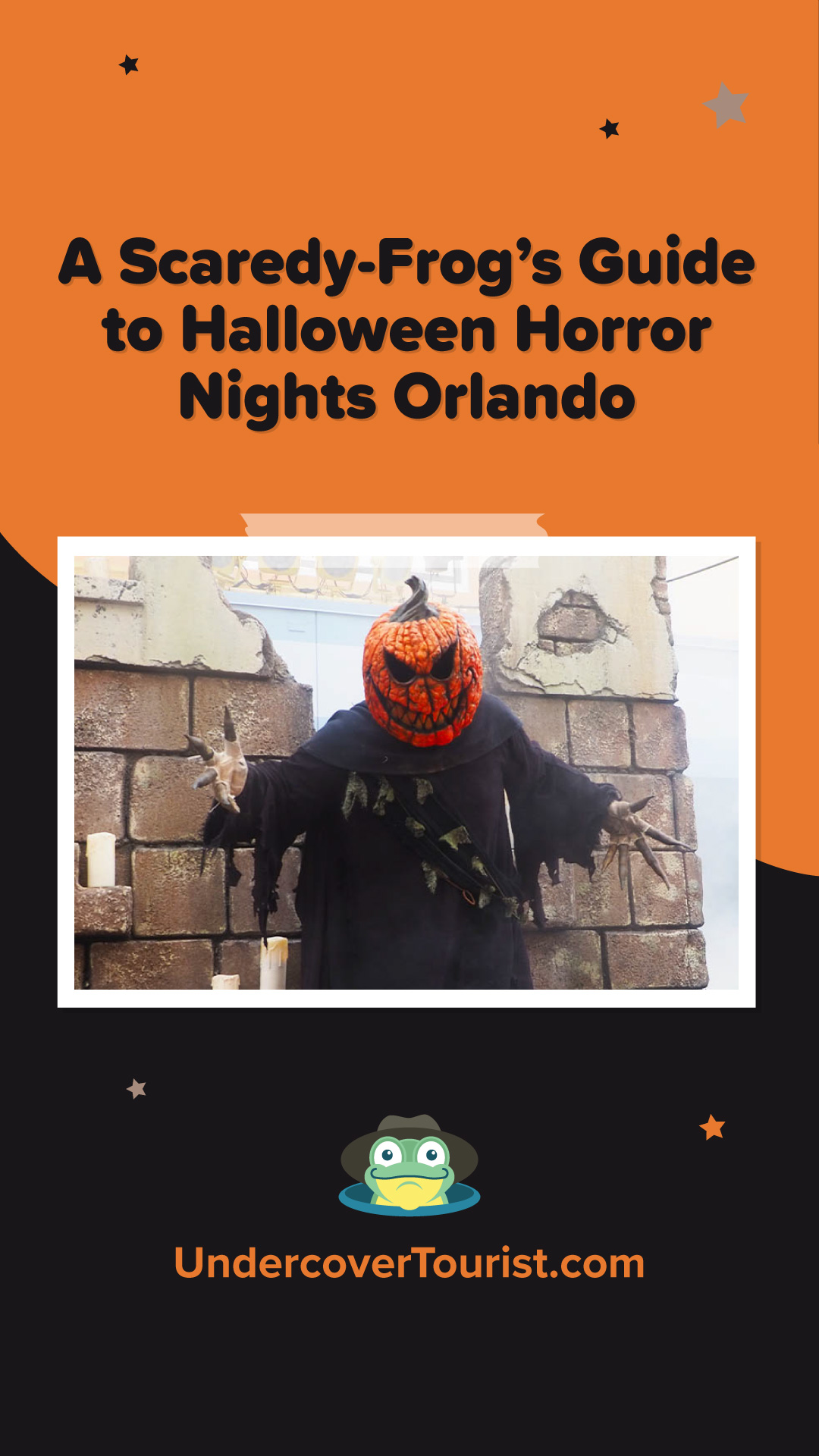 If the thought of confronting creatures from your worst nightmares sends shivers down your spine, you've come to the right post. Universal Orlando's Halloween Horror Nights is the world's premier Halloween event for a reason. It's haunting, horrific and downright terrifying. But that's what makes it so frightfully fun for frogs like me who enjoy a scare! That being said, Mommy Frog isn't as big of a horror buff as I am ... so it took a while before I was able to convince her to come along. She still clings to me all the way through the houses with one arm and uses the other arm as a barrier in front of her face, but she actually looks forward to the event every year now — I swear! Still, we leave Lily at home and don't recommend the event for tadpoles under 13 due to its intensity.

Over the years, the two of us have put together a list of tips for fellow scaredy-frogs, such as Flora herself, who need that extra bit of encouragement. If you want to come to test the waters and see what all the hair-raising hype is about, or if your fright-loving friends and family are just begging you to join them, we hope this list will help to ease your fears, even the slightest bit. It's absolutely possible to navigate this event without needing a change of shorts — if you know what I mean.

1. Be Aware of the Scares 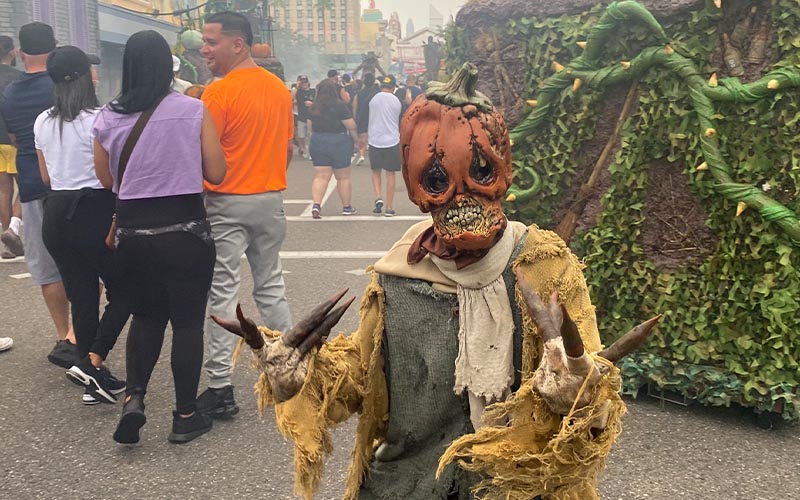 I'll be frank: There's no possible way to avoid every scare. Once you enter the gates of Universal Orlando, there are only two options: Head straight forward through Production Central or veer to your right to stroll down the streets of Hollywood. The problem is both areas of the park house a scare zone. Additionally, if you want to get to Springfield, you'll need to pass through the Central Park scare zone, and if you want to get to Diagon Alley, you'll need to pass through either the New York and/or the San Francisco scare zones. The coast is mostly clear from London to Woody Woodpecker's KidZone (aside from a chainsaw wielder or two) — you'll just pass by the stage show and the entrance to the queues of several houses.

That being said, you'll absolutely want to pass through these scare zones when it's still light out — at least at the start of the event! This is completely doable since the gates open by 6:30 p.m. and the sun hasn't completely gone down yet. Being able to see everything around you makes it much easier to walk through these areas. (It's also a great time to appreciate the art and detail that goes into the sets and costumes!) At the end of the night when you need to make your way back to the front, stick to the sidewalks. They're unspoken safe zones as the scare actors normally stay on the streets.

2. Come for the  Treats, Stay for the Treats 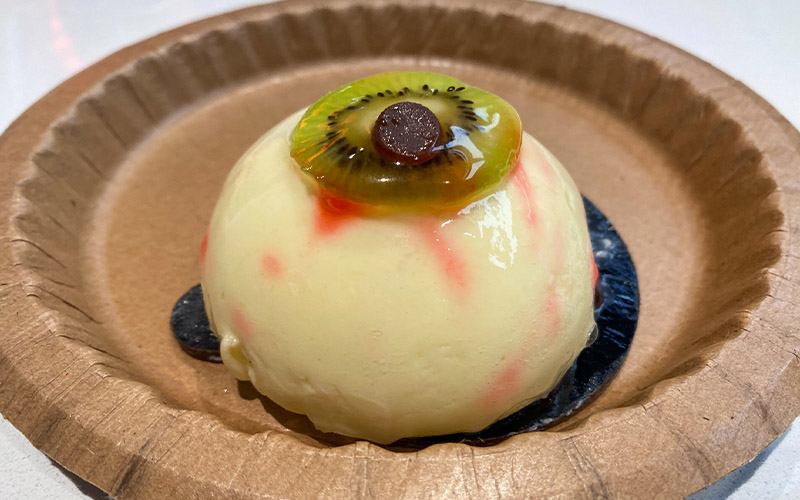 One of the iconic staples of the event is always the food! Any fan knows you can't go to Halloween Horror Nights without noshing on the infamous pizza fries (crinkle-cut fries topped with marinara sauce, pepperoni, sausage, mozzarella and parmesan cheese) and/or twisted taters (a spiraled potato with fried skin coated in your seasoning of choice). Every year, the culinary geniuses at Universal Orlando concoct some truly unique and delicious dishes, such as this year's Petrified Rat Tails (Floria Bay seasoned funnel fries with creamy crab dip and sliced scallions). There are also some sinfully sweet cocktails you can find scattered around the park, such as the Burning Skull (El Jimador tequila, Gran Gala liqueur, lime juice, simple syrup, mango nectar, pineapple juice, hellfire bitters, jalapeño and basil), as well as some tantalizing treats such as the Coconut Yuzu Eyeball (coconut yuzu mousse with prickly pear and hibiscus coulis).

There is absolutely no shame in coming just to try these event-exclusive offerings. Park yourself at a table or bench and marvel at the madness hoppening around you, or entertain yourself by watching fellow frogs being scared out of their minds!

3. Hop Right on to the Rides 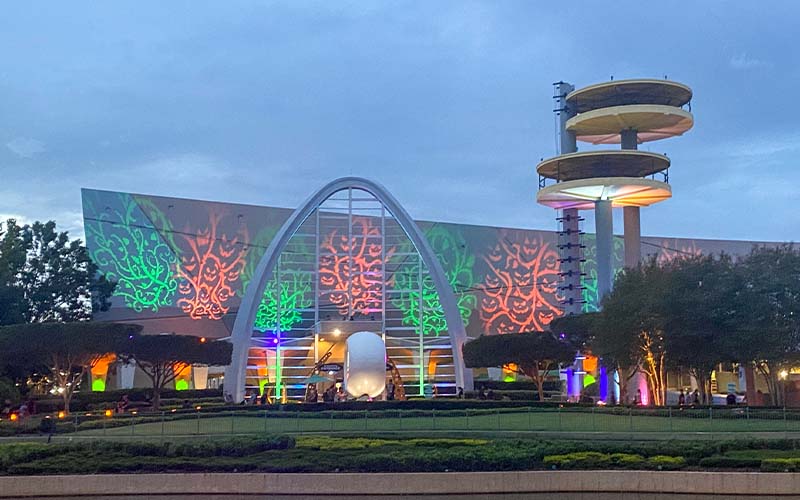 If you're going to Universal Studios Florida at any time of the day, you can expect to get on some rides, right? Well, Halloween Horror Nights is the perfect time to do just that! Since the majority of frogs who come to this event will be waiting in line for houses, the five rides that are open during the event tend to have low wait times. (You can even make your waits shorter by purchasing an HHN-exclusive Express Pass, but if you're not planning on going in the houses, then it's not entirely necessary.)

Note that some of the rides tend to close up to two hours prior to the end of the event. Be sure to plan accordingly. 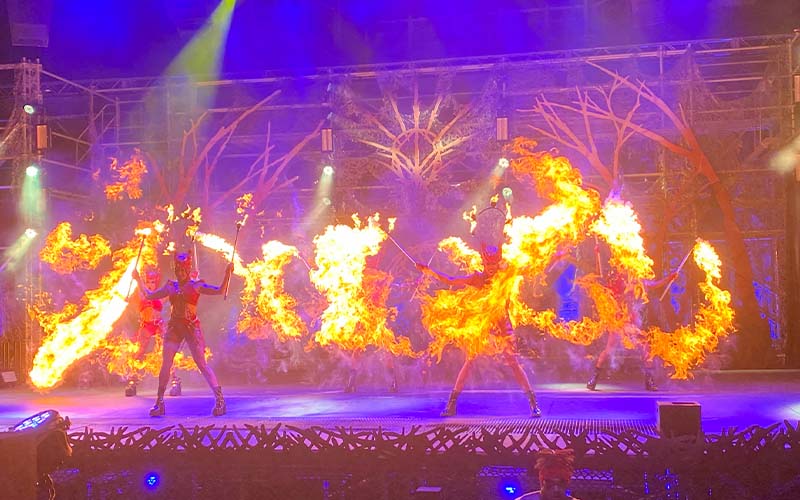 Every year at Halloween Horror Nights, a new visual spectacle graces the FEAR FACTOR Live stage. These shows sometimes include some (fake) guts and gore, foul language and an abundance of violence ... but I can promise you one thing they do not include is jump scares. How could they when you're surrounded by almost 2,000 fellow frogs and all the action is hoppening live onstage in front of you? You'll be shocked, amazed, disgusted, entertained and probably find yourself dancing in your seat a little bit, but you won't particularly be frightened. The shows are a relatively safe space and a great way to get in on the HHN action without needing to brave the houses!

Also, catch the show happening on the Studio Lagoon several times each night. Pulsing lasers and pounding, electrifying music fill the air as a menagerie of menacing monsters are projected onto massive water screens. 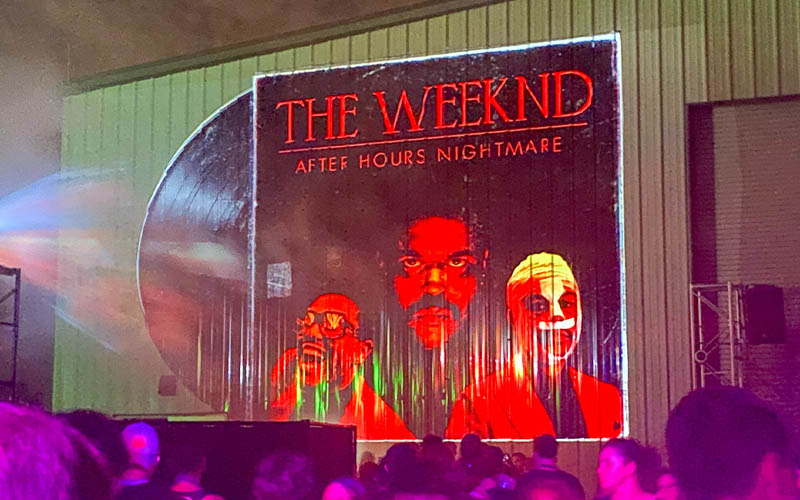 If you're feeling brave enough to conquer at least one house, there's no substitute for preparation! Before you go to Halloween Horror Nights, research the haunted houses and scare zones. If you don't like insects or have trypophobia, then avoid "Bugs: Eaten Alive." Sensitive to strobe lights? You may not want to skip "Hellblock Horror" and "The Weeknd: After Hours Nightmare."

See if you can find any walkthrough videos on YouTube of the houses. Watch them and make note of where each scare is coming from so nothing actually surprises you when you make your way through your chosen house. Lucky for you, we have walkthroughs of "The Weeknd: After Hours Nightmare," "Dead Man's Pier: Winter's Wake" and "Universal Monsters: Legends Collide" all on our YouTube channel — with more on the way! 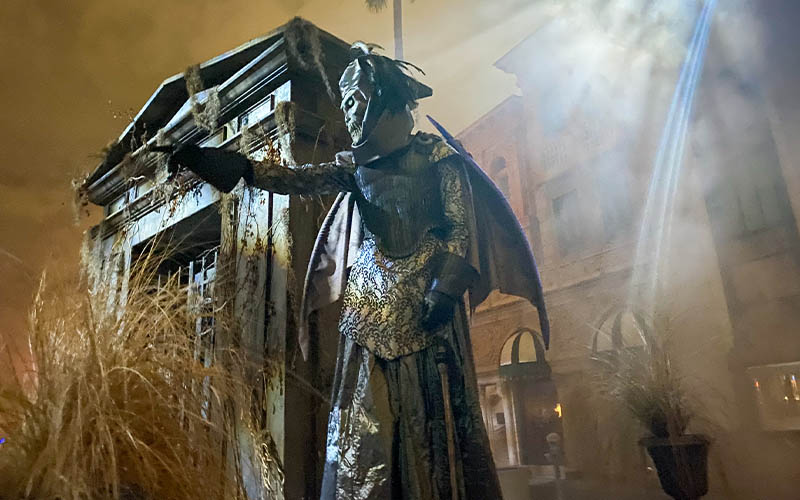 The same advice goes for scare zones, but those are a little more impromptu (as frogs can actually interact with the scare actors), so they won't look the same night after night. But again, it'll give you a feel of what you're walking into before you actually make your way through the gates.

6. Give Yourself a Shriek Peek 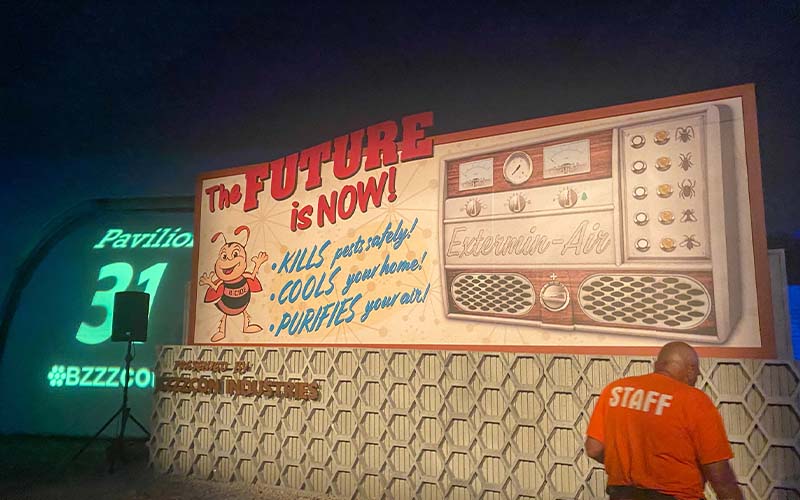 Everything is less scary with the lights on! If you want to get a good look at the houses before braving them in the dark, we highly recommend booking the Behind the Screams: Unmasking the Horror Tour. You can choose from either a three-house tour or a six-house tour for a rare look at these masterfully crafted mazes without any scare actors, special effects or other things that go bump in the night. This is a great opportunity to see where exactly the scare actors will be hiding out and learn about what props and set pieces are going to pop out at you when the sun sets. 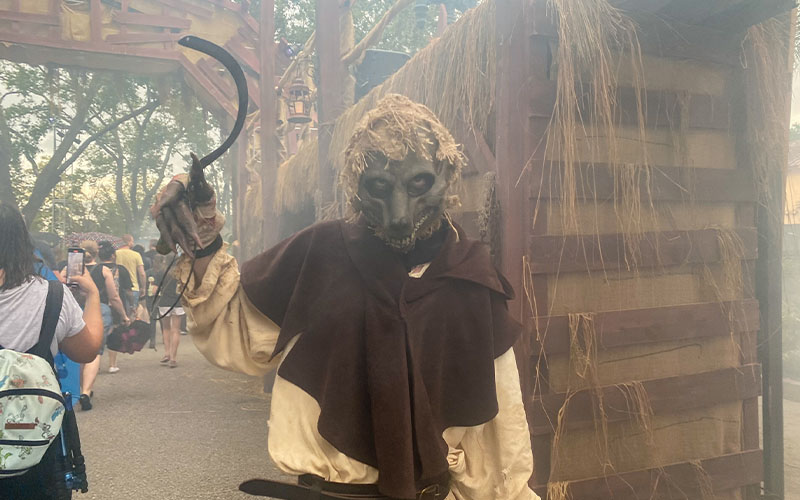 Whether you need to cross through a sinister scare zone or decide to enter one of the horrifying houses, there's one important thing to keep in mind: The scare actors can't touch you (and you can't touch them)! The worst thing they can do is give you a good jump scare. For a lot of first-time frogs, reminding themselves of this information is enough to give them the courage they need to face their fears. The creepy creatures that call HHN home can threaten you with knives and chainsaws all they want, but, rest assured, you're going to make it out of those scare zones and haunted houses alive and intact.

All the scare actors are trying to do is get your heart pumping and your blood racing (the same goal as the director of any scary movie or the designer of any roller coaster). That being said, if you know you have health problems, it might be best to sit this event out. Know your limits and keep your own safety in mind.

8. Don't Let Them See Your Fear 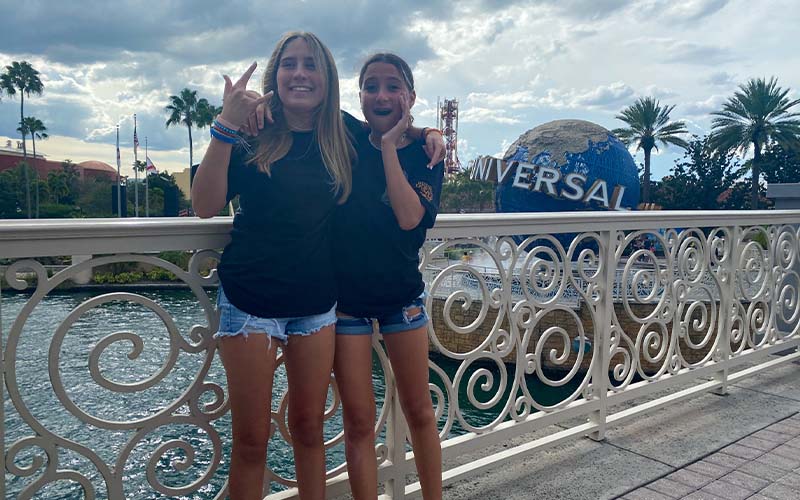 Our #1 tip: Avoid looking scared at all costs. The scare actors are trained to target anyone who they see as being easily frightened. Let your guard down and laugh your way through the scare zones. Put on those metaphorical blinders and simply march your way through the haunted houses, ignoring all the guts and gore on either side of you. Screaming or shivering is the same as wearing a bright neon sign asking the performers to scare the living daylights out of you. Keep your head up, walk tall and take a few deep breaths. You're going to be OK, and hopefully, you'll have a little fun too!

Have you braved Universal Orlando's premier event before? What are your best tips for scaredy-cats braving Halloween Horror Nights? Let us know in the comments below!

Related: How to Conquer Halloween Horror Nights Orlando with Teens and Tweens