'Sup gamers? It's a-me, Tad, the gamer and Super Mario fan of the Frog Fam. I'm toadally excited for Super Nintendo World at Universal Studios Hollywood. If I could figure out how to unlock the Warp Zone and transport myself to opening day right now, I would! But it looks like we will have to play the game of life and discover this immersive land in real time. I did get a short preview of the land in advance though! I'm sharing everything I know about Super Nintendo World and the new ride at Universal Studios Hollywood Feb. 17, 2023! 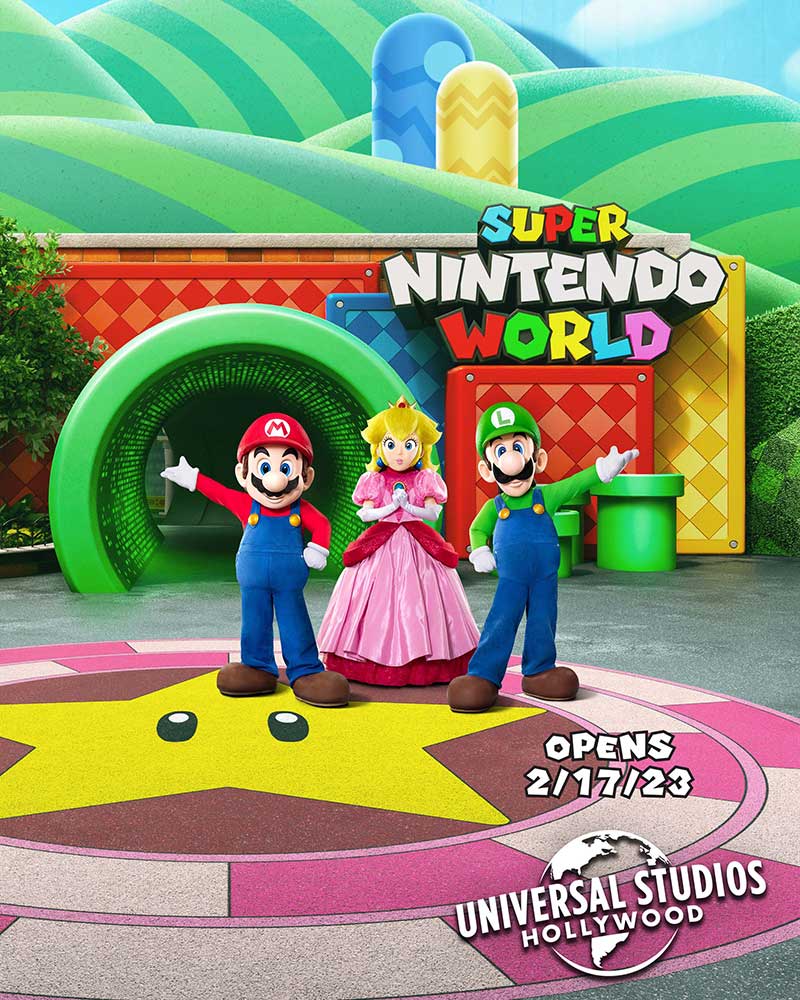 Here's what I know so far! Be sure to keep hopping back, as I'll be "leveling up" all the deets as soon they're released. As Luigi would say, "Let's a-go!"

The Super Nintendo World at Universal Studios Hollywood will officially open Feb. 17, 2023. Technical rehearsals started during the second week of January, so some people have already experienced this land. If you visit before the official opening, it's possible you might get lucky and get a sneak peek during a technical rehearsal. But it's not guaranteed. Annual Passholders also had the chance to sign up for short previews of the land before it opens. 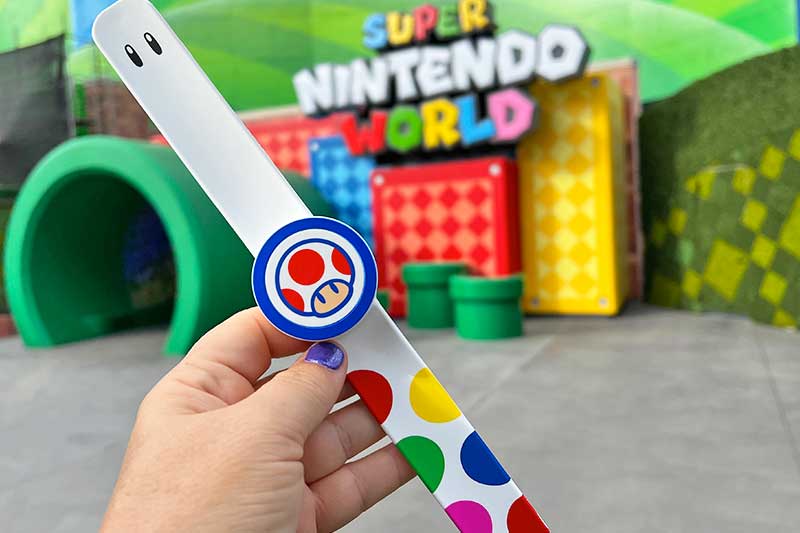 Where is Super Nintendo World?

The new land is located in the Lower Lot. You can see the entrance to the left of Transformers: The Ride-3D. And get this: Guests will enter this colorful and interactive new land via a Warp Pipe. Super frogciting!

Is there a reservation system to enter Super Nintendo World?

When Super Nintendo World opens, you'll need a reservation to enter the land at times. In the Virtual Line box in the Universal Studios Hollywood app, tap "Virtual Line Venues." If the land does not appear in the options section, a reservation is not required that day. If you don't have a smartphone, you can sign up at a kiosk. The kiosks are located in the Lower Lot to the right of Transformers: The Ride 3D.

Unfortunately, the one ride in the land — Mario Kart: Bowser's Challenge — is excluded from the Universal Express pass. However, this may be temporary, as the ride has a Universal Express line built into it. Hopfully, the reservation system helps to control the wait time for the ride. This particular ride also offers a Single Rider option. Keep in mind, the Single Rider line skips the very immersive queue.

Will there be annual passholder previews before the new land opens?

Yes! Annual passholders were able to sign up for a two-hour window to preview Super Nintendo World. However, sign-ups opened on Jan. 5 at 1:30 p.m. PT, and are now full. In the land, guests can access Mario Kart: Bowser's Challenge, explore the Mushroom Kingdom, enjoy interactive play and access select retail, food and beverage locations. Preview dates are:

Visitors can purchase Power-Up Bands (on sale now!) to take part in gameplay inspired by popular Nintendo video games, primarily Super Mario Bros. Guests may want to purchase and set up theire Power-Up Bands before their previews window to maximize time. Power-Up Bands sync to a smartphone app, allowing guests to track scores and compete with other players. You can buy them around the park, and in the land, in stores or kiosks.

Keep in mind that the land is small. Strollers are not allowed inside the land during passholder previews. There is a stroller parking area, but the large crowds leave hardly any room for strollers. 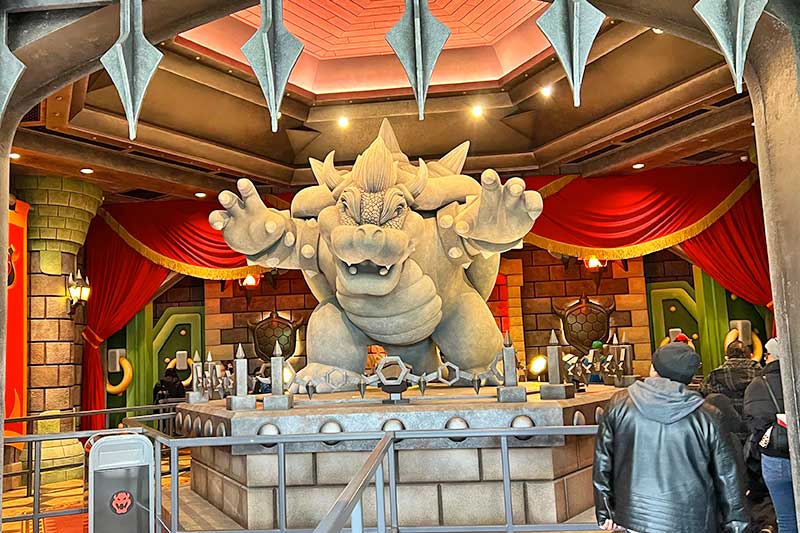 OK, let's speed right to my favorite part. The large ride in the land is based on my favorite video game, Mario Kart! Mario Kart: Bowser's Challenge is located inside Bowser's Castle. The interactive, moving track ride combines augmented reality (assistance from head-mounted goggles) with projection mapping technology and set pieces. It's said to be one of the most complex rides ever made in the entertainment industry! You first put on a visor and then once on board, you'll magnetically attach the goggles to the area under the visor. 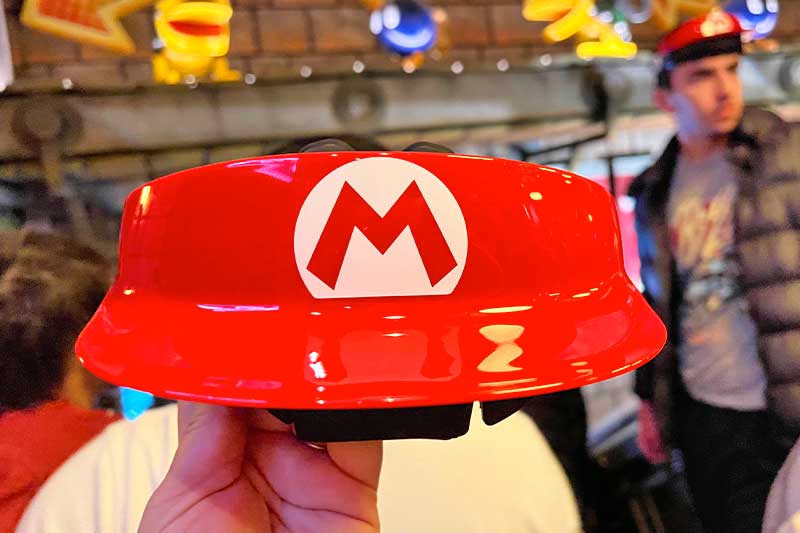 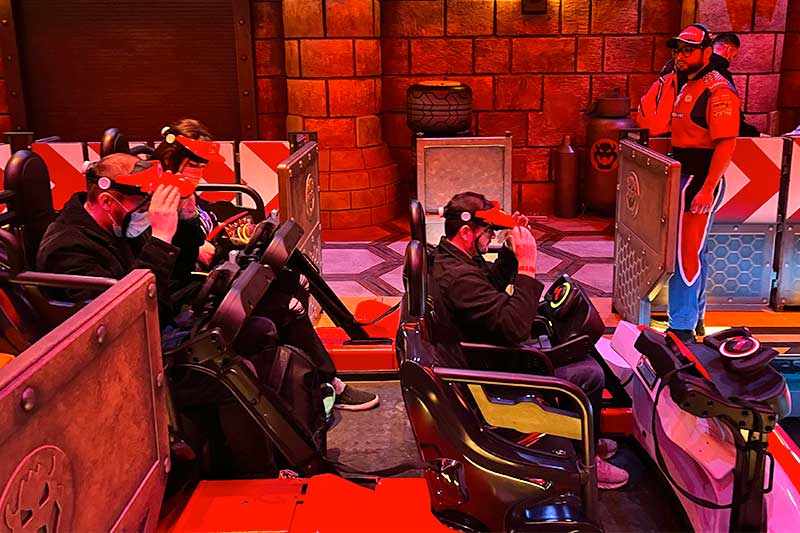 Riders will climb aboard four-person, stadium-style Mario Kart vehicles from the dungeons of Bowser's Castle. Then it's time to attach the goggles and wait for the "3-2-1-Go!" signal from Lakitu. In the quest to win the Golden Cup, riders will steer through courses in the clouds and even underwater! They can battle Team Bowser alongside Mario, Luigi and Princess Peach, throwing shells and collecting coins along the way. To throw and collect, push the buttons on the top of the steering wheel. 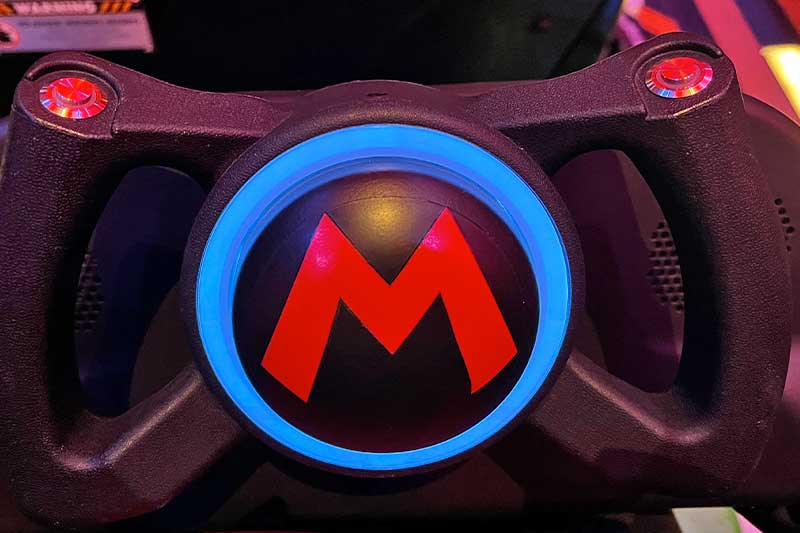 The goggles on this ride allow you to see graphics and characters. Here is a look at what the ride looks like in the two different scenes both with and without the goggles. 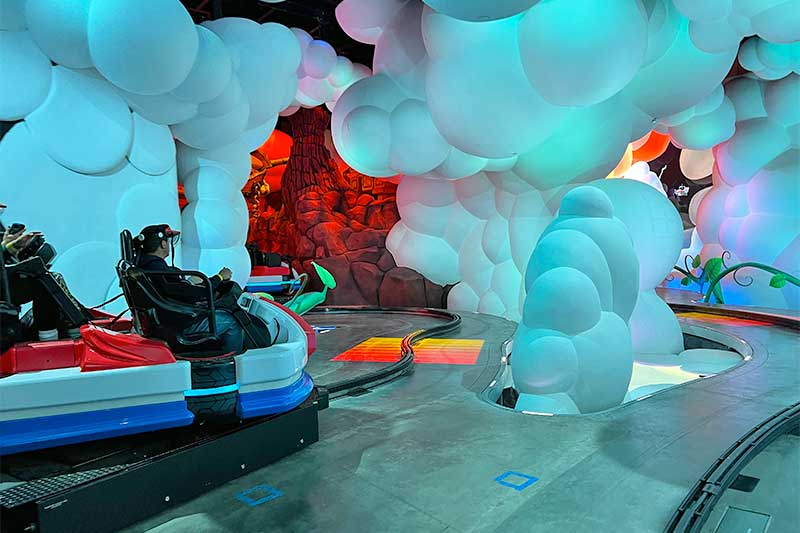 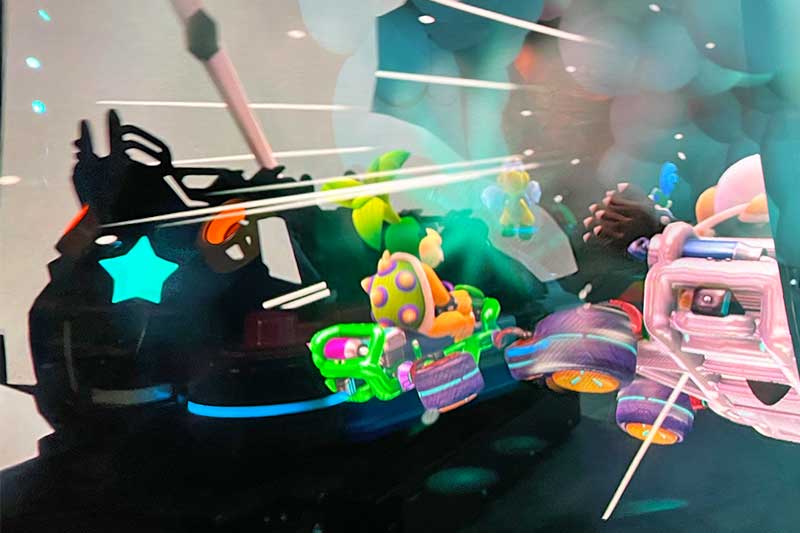 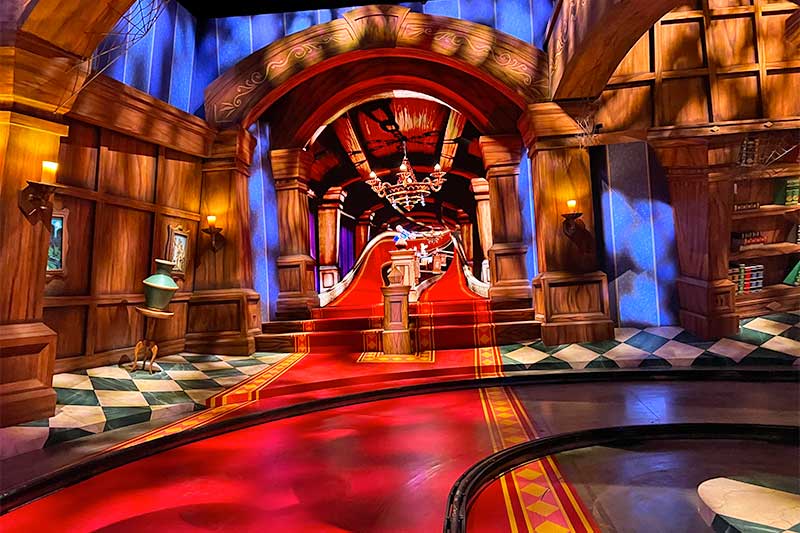 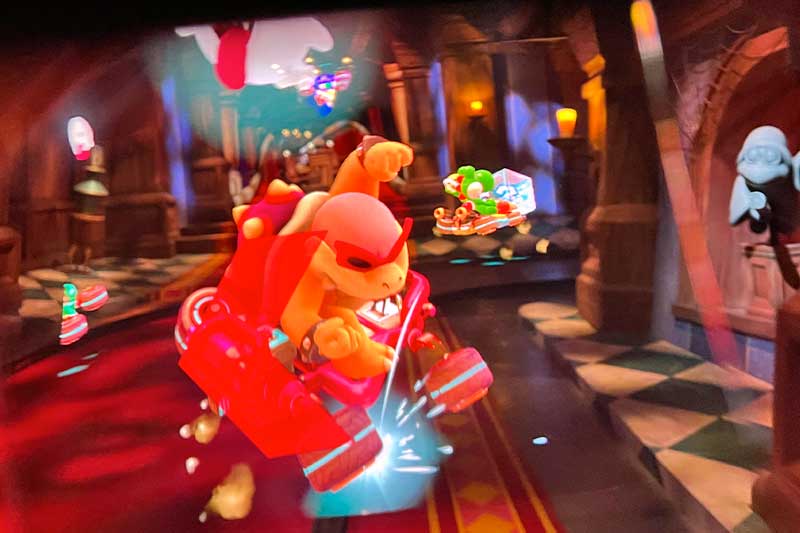 The ride has a variety of outcomes, which means riders will want to go again and again! Duh! I know once will not be enough.

The ride appeals to guests of most ages, even those with little gaming experience, like my little sister, Lily (once she's tall enough to ride). But even my parents play Mario Kart with me (and Super Mario Bros. when they were froglets) so they were also frogcited to experience this ride and visit the new land. My parents used Child Swap to take turns watching Lily.

Do not expect this ride to go fast or feel speedy like the Mario Kart video games. It is much slower than you might expect it to be. But there is a lot to take in! If it gets to be too much for you, or you feel motion sick, simply remove the goggles. 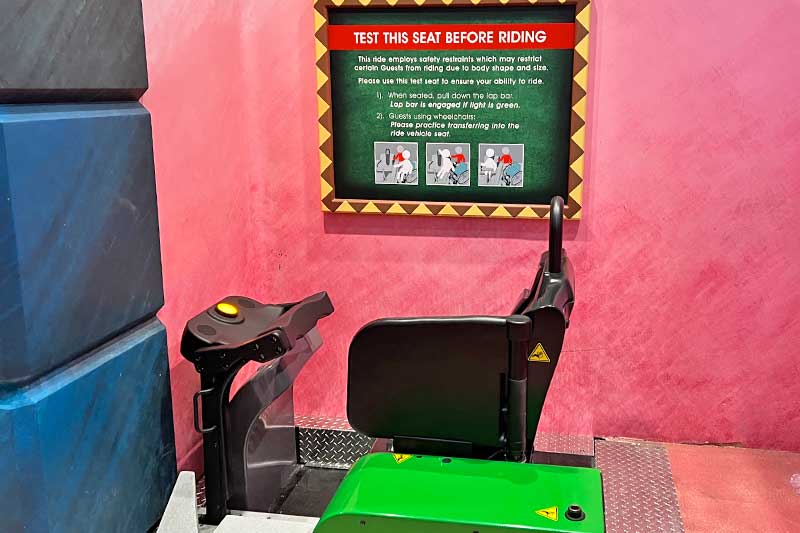 Important info about the ride: 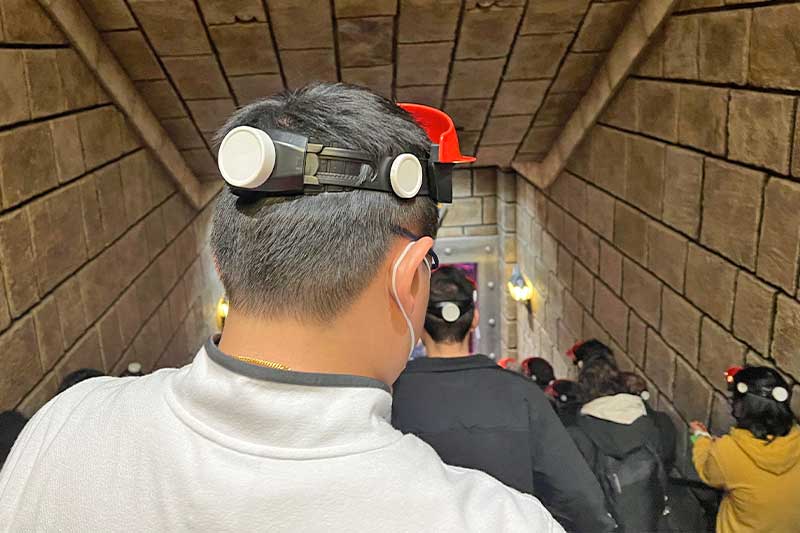 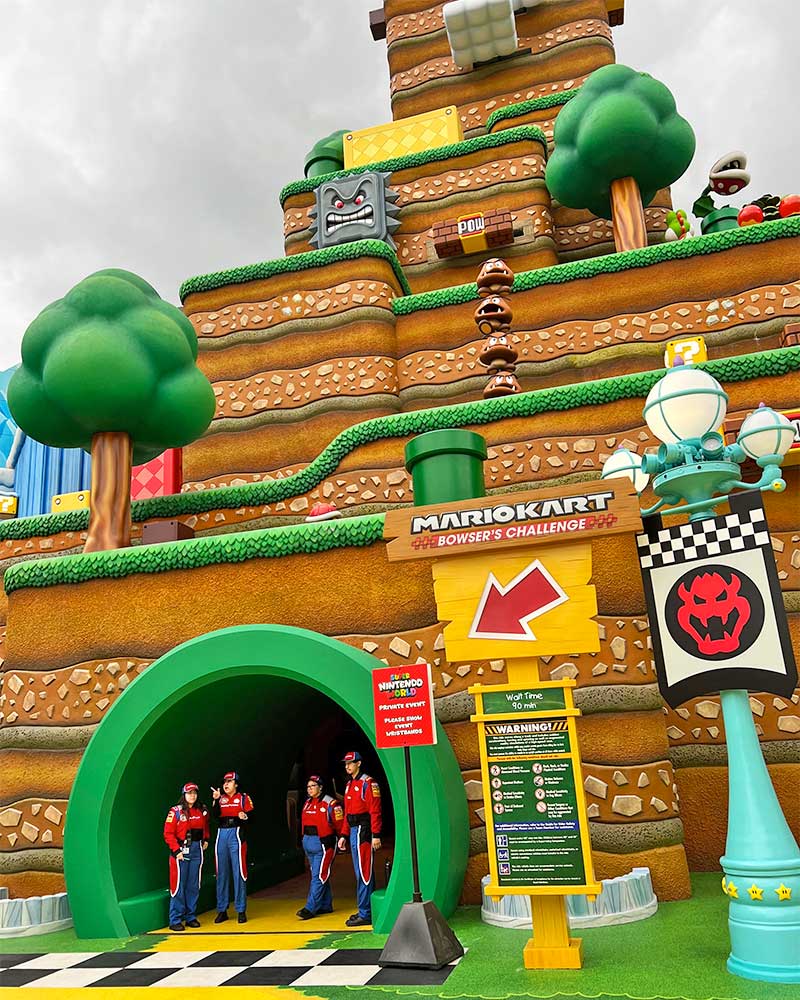 Imagine you have been transported into a Super Mario Bros. video game, with the ability to bump into Goombas and dodge Venus Fire Traps as you collect coins in the Mushroom Kingdom. In Super Nintendo World, you can do all of that and more! In fact, you can become one of the characters in the game (with some assistance from Power-Up Bands). You are not simply playing the game on a screen. You are living it! You can expect colorful animatronic scenery with spinning gold coins, boxes with question marks and more within the interactive games and quests scattered throughout the land. It is a feast for the eyes!

This towering landmark sits at the heart of the land and serves as the entry queue for Mario Kart: Bowser's Challenge.

Complete with a sculpture of its powerful namesake, Bowser's Castle is the key centerpiece of Super Nintendo Land. Guests will navigate the winding corridors and pass through the hall of medallions and trophies to board Mario Kart: Bowser's Challenge, while learning more about Bowser's plans to defeat Team Mario for the Golden Cup. The queue is extremelt detailed and a must-see for Nintendo fans! But it does have a lot of steps, so talk to a team member about taking the elevator if you need it. 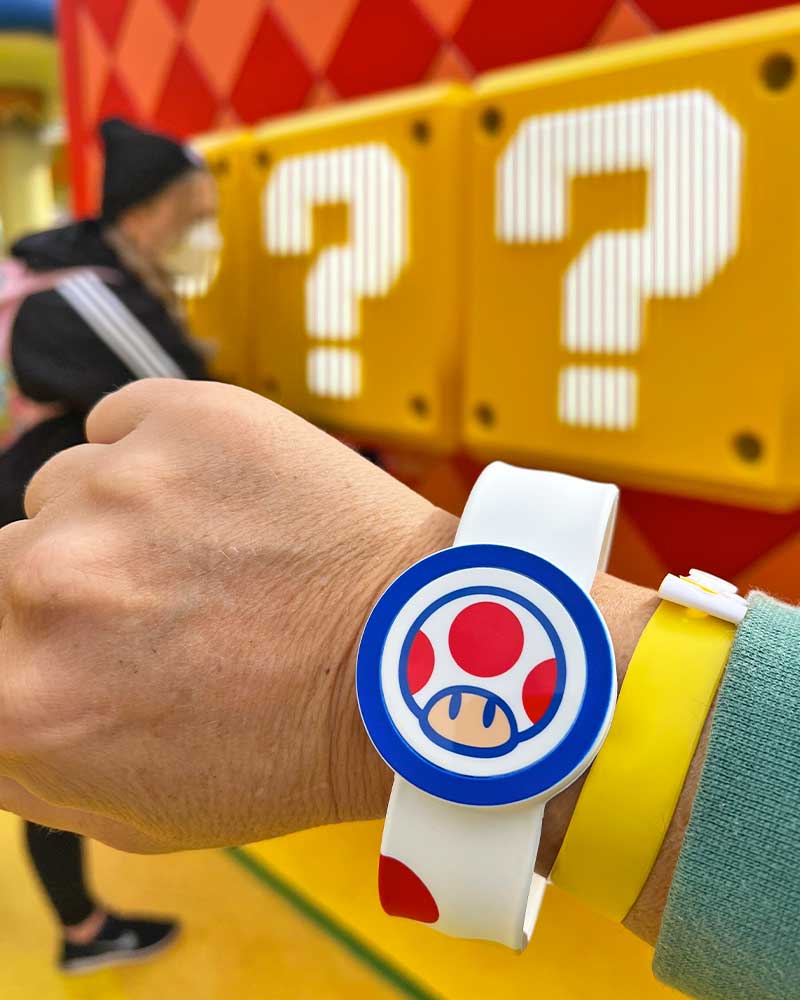 This wearable wristband syncs with Universal Studios Hollywood's official app to unlock many interactive elements within the land. These include, but are not limited to, keeping individual and team scores, collecting digital coins and obtaining special keys after winning challenges, allowing you to level up your game. Wahoo!

The band also allows guests to have star-worthy interactions with Mario, Luigi and Princess Peach!

Power-Up Bands come in six different character designs and will be available to purchase within the land, at Super Nintendo World retail shops in the theme park and in CityWalk (at the Super Nintendo Store). The band is a rubber slap band. It tends to curl up on your wrist and fall off, so keep a close eye on it.

With a Power-Up Band, the possibilities for engaging in real-life gameplay within the land are endless! Many of these activities include punching question blocks to collect digital coins. Discover a new dimension of the land via interactive binoculars that use AR technology, which are positioned all throughout the land. Players can beat the four Key Challenges and collect keys from activities hosted by Goomba, Koopa Troopa, Piranha Plant and Thwomp. Succeeding in all of these mini-games leads to a boss battle with Bowser Jr. 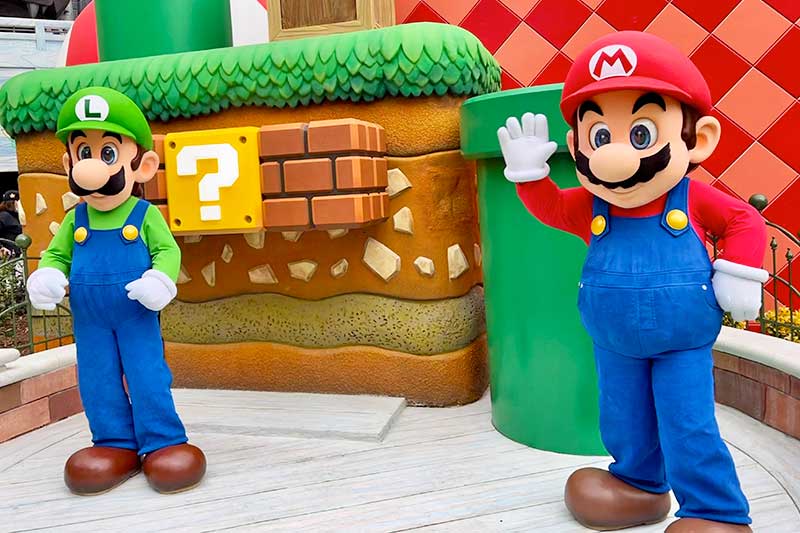 You can meet Mario, Luigi and Princess Peach in Super Nintendo World!  Oh yeah! When meeting them, wear your Power Up Band for an extra special experience. The characters can talk and move their eyes! It's recommended to hop in line about 30 minutes before their scheduled appearance. Upcoming greeting times are indicated on a sign near their meeting area. Sadly, Mario and his pals do not come out in the rain. 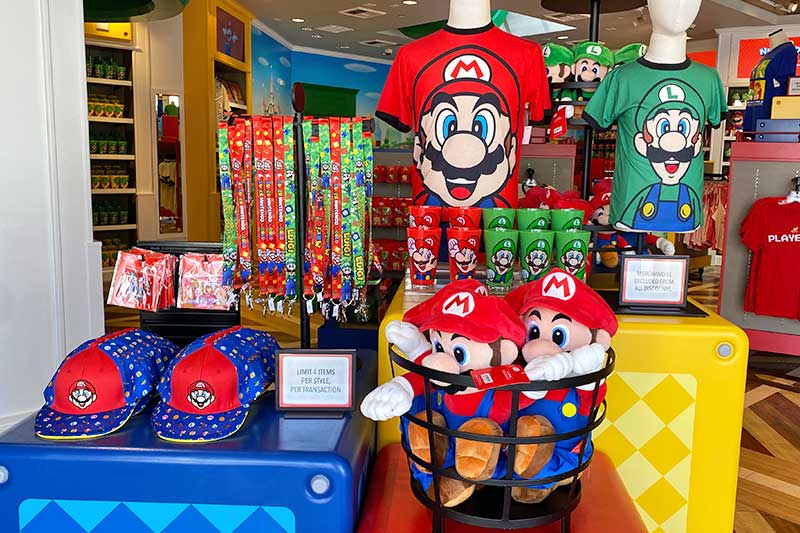 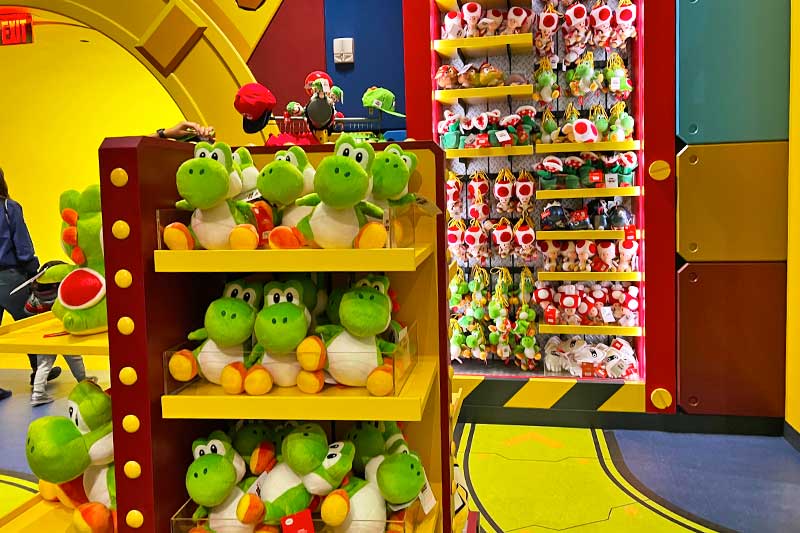 When you exit Mario Kart: Bowser's Castle, you'll pass through the 1-UP Factory to purchase a souvenir! The retail shop offers an extensive collection of merchandise, including Nintendo character apparel, iconic hats and headwear, plush characters, bands and more. The Power-Up Bands can be found behind the counter. 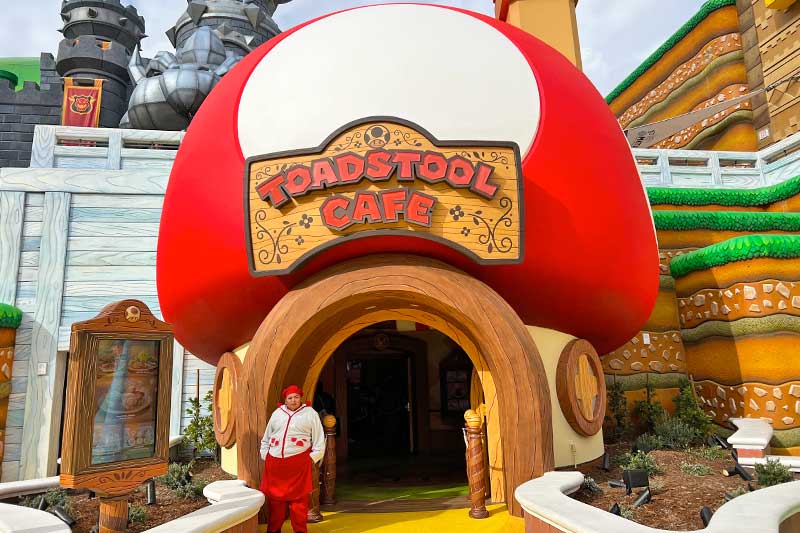 Some of your favorite Nintendo characters are serving up delicious dishes inside the new land, too! 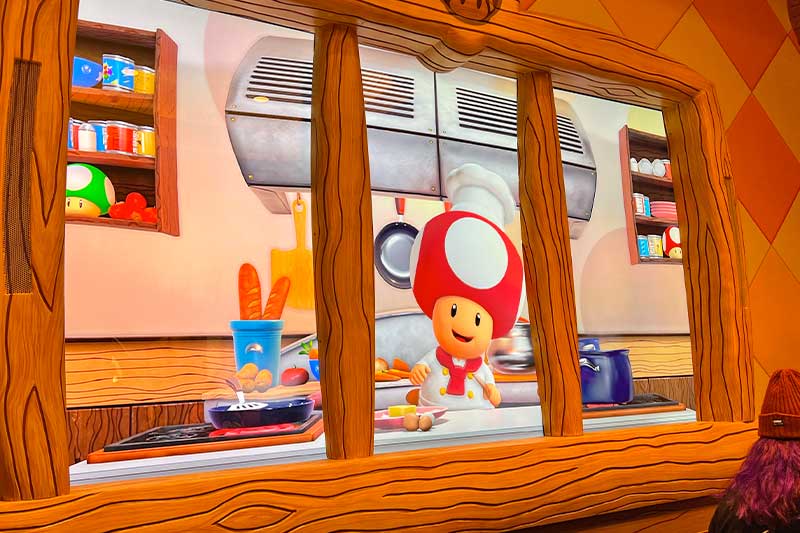 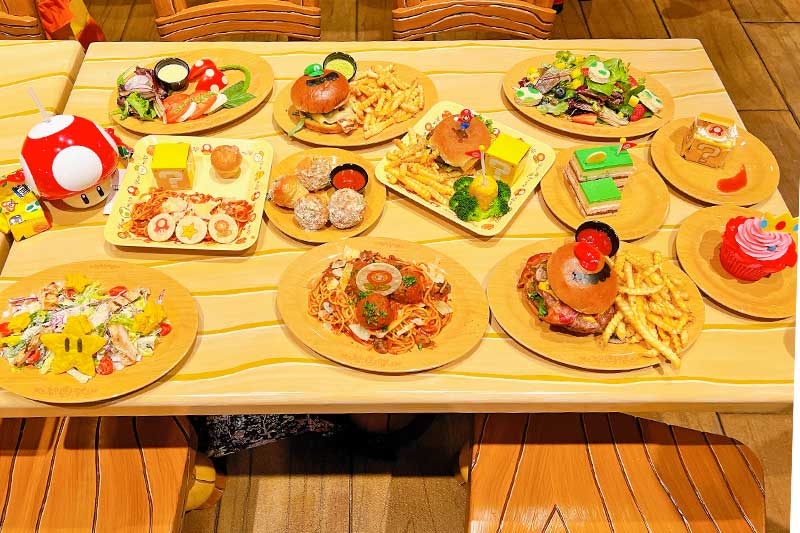 We tried every dish! Our frog squad's favorite is the Luigi Pesto Chicken Burger. The pasta was pretty good too, as well as the seasoned fries. The kid meals come with a ? mark box, containing a coin cookie inside. It is an Oreo-like cookie dipped in yellow chocolate.

Here we goooooo! What are you most looking forward to at Super Nintendo World at Universal Studios Hollywood? What do you most want to know? Let us know in the comments below.

Related: What's Coming to Disneyland and Universal Studios Hollywood in 2023 and Beyond

SAVE $130 vs Gen. Admission gate price