Every spring, Florida's biggest party comes alive during Universal Mardi Gras: International Flavors of Carnaval. Universal Orlando Resort plays host to the hoppin' New Orleans celebration, complete with Cajun and international flavors, toadally amazing concerts and entertainment — including a float-filled, electrifying parade — that would make the Big Easy proud. In 2023, the party will start on Feb. 4 and run until April 16! 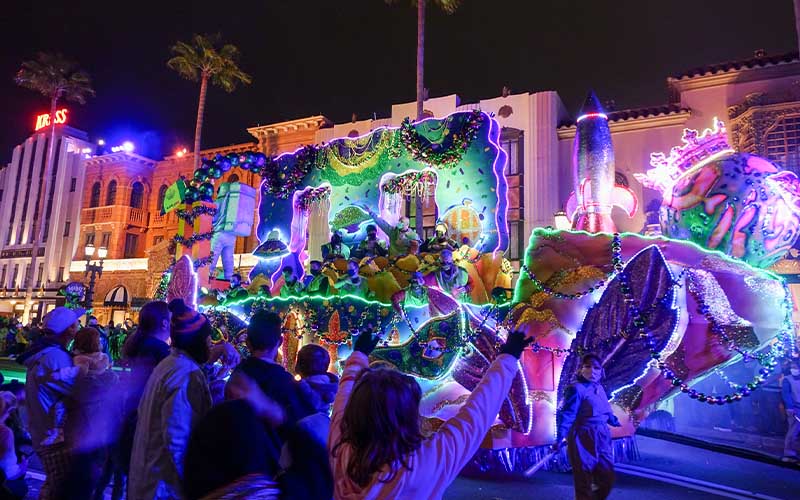 Between gorgeous weather, all-star music, killer food and festive floats ... what more could you ask for? French Quarter Courtyard is chock-full of dancers, jazz bands and delicious food ... beignets, anyone? All of the extra fun is included with regular Universal Orlando park admission!

This fun, action-packed event takes place daily during our personal favorite season in Orlando, so you really can't miss it. Take a peek at our ribbeting guide for Mardi Gras, including treasurable tips to make the most of your visit. Let the good times roll, frog friends!

Last year's original parade theme was "Planet Mardi Gras" and featured six brand-new floats that combined Mardi Gras revelry with comets, rockets, martians and more. These out-of-this-world additions joined Universal's traditional lineup of New Orleans-inspired floats and dozens of performers in festive costumes as they wound through the streets of Universal Studios and threw out beads by the handful.

It's important to strategically plot your parade spot. Below is a list of what times the parade hoppened last year (subject to change — so be sure to double-check on the day of your visit).

Parade started at 5:15 p.m. on the following dates:

Parade started at 6:15 p.m. on the following dates:

Parade started at 7:15 p.m. on the following dates:

Parade started at 7:30 p.m. on the following dates:

Parade started at 7:45 p.m. on the following dates:

No Parade on the following dates:

Later showings are when you really have to plan ahead! 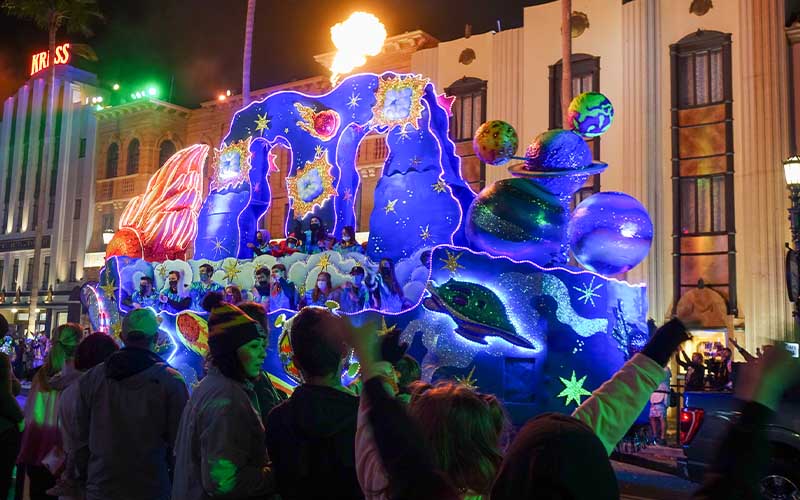 If you want to attend the concert at 8:30 p.m., we recommend getting a spot right along the edge of the street in front of Music Plaza Stage for a quick turnaround to snag a concert spot. Last year, Tad and I snagged a spot across the street from the former Universal Studios' Classic Monsters Cafe about an hour and 15 minutes before the parade started and were right at the front of our section when the ropes went up. As soon as the parade ended, we were able to make our way to the concert viewing area quickly and snake our way to the front for a frogtastic view! There was also a family viewing area near the Brown Derby Hat Shop in Hollywood for tadpoles under 10 and an accompanying grow-up, which was where Leap and Lily camped out. These are great locations, but don't bank on them unless you arrive early ... they typically fill up quickly!

To land a solid parade spot anywhere, try lining up about 30 minutes ahead of time. On weekends, crowds are heavier, so arrive 45 minutes early ... and if you have a larger group or want front-row seating, find your spot at least 60 minutes ahead of the parade start. Front-row seating (or standing) gives you and your tadpoles a better shot at catching beads. This is half the fun for us, so we'd highly recommend looking for a spot! The earlier, the better!

Did you know you can also reserve a spot on a float?!? Starting at around 12 p.m. until one hour prior to parade start, Virtual Line Passes are available on a first-come, first-served basis via the Universal Orlando app. Once available, tap "Reserve Virtual Line Experience Pass" and select the number of frogs in your party. Choose the available time you'd like to return to ride your float and you're all set! The entire Float Riding experience lasts two to three hours, so you might miss the beginning of the concert, but if seeing the show isn't a priority for you, we can't recommend this experience enough. All riders must be at least 48 inches tall with a parent/adult guardian over 18 to sign a waiver. Face coverings are required and floats are assigned upon availability. Get your throwing arm ready! 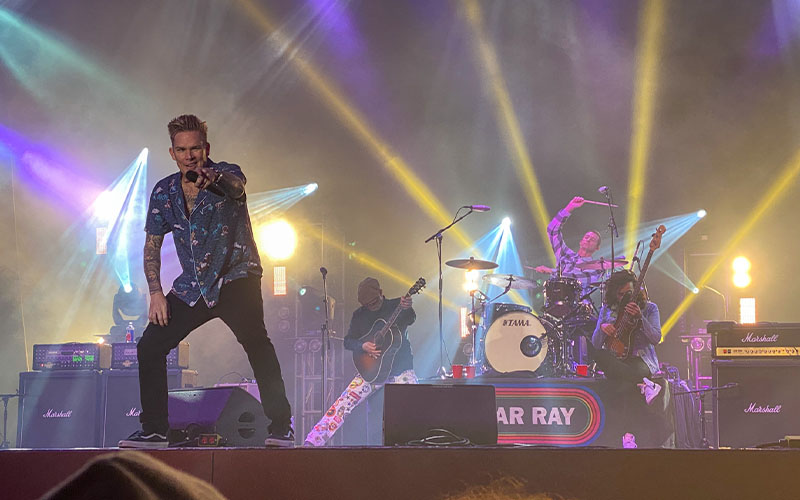 Universal Mardi Gras always has a super impressive lineup of performers from all different music genres for its concert series. During weekends throughout the celebration, Music Plaza Stage hosts some of radio's finest bands and artists.

Performances usually begin at 8:30 p.m. on each concert night. Concerts take place on select Fridays, Saturdays and Sundays throughout Universal Mardi Gras. This was the concert lineup in 2022:

Concert crowds will vary depending on the popularity of the artist and day of the week. For instance, Lily was excited for Becky G and Tad couldn't wait for Khalid, but "the old frogs" like me and Leap were hoppin' for Diana Ross and Styx. Fridays and Saturdays generally bring in larger crowds than Sundays. If you don't mind missing the parade, we recommend landing your concert viewing spot about an hour ahead of time for a spot on the grass. Each concert is about an hour and a half long. Sugar Ray's performance on the first night of Mardi Gras heated up the freezing cold night with classics, including "Every Morning" and "Fly." Everyone in the crowd was singing along! 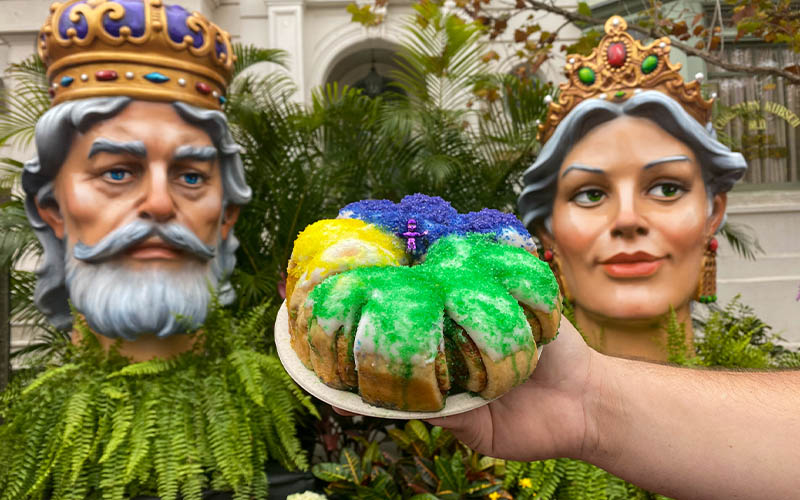 New Orleans is known for its hoppin' delicacies, and the Cajun offerings at Universal Mardi Gras are no different. Last year, bold flavors ignited our taste buds with an array of delicious culinary delicacies inspired by various locations around the globe. Food booths opened at 11:30 a.m. and operated until 30 minutes before the park closes.

Use the official Universal Orlando app to locate the exact food booth locations on a map and study the menus.

The Mardi Gras Tasting Lanyard wasn't available in 2022. However, there were specialty "Mardi Gras Food and Beverage" gift cards available for purchase at various locations throughout the park during the event. Give the gift of "good times" to a friend or use it for yourself and minimize the time you'd spend fishing for your wallet! The cards don't expire, so you can keep hopping back for more, even after Mardi Gras is over, if you have a remaining balance. 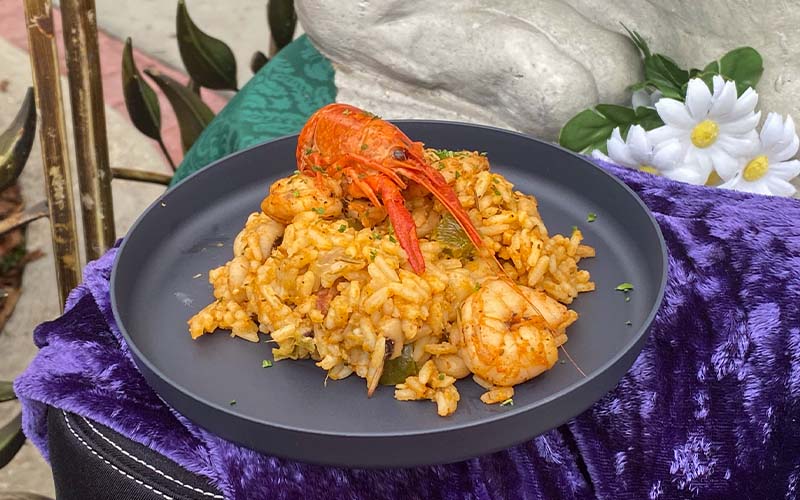 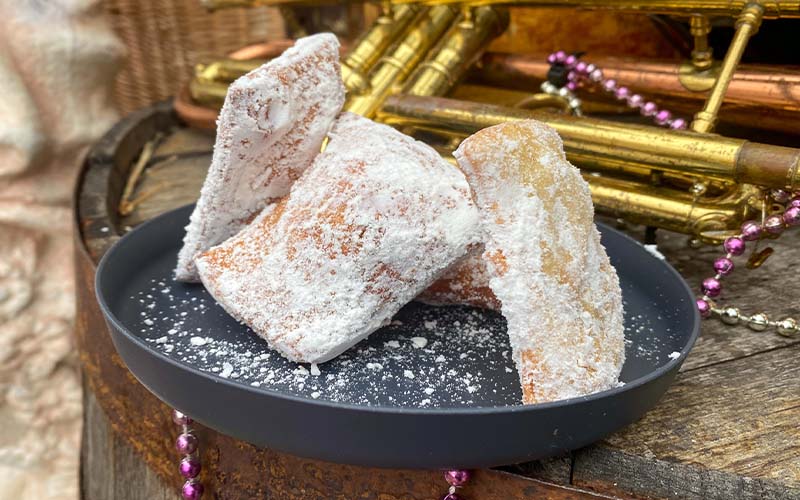 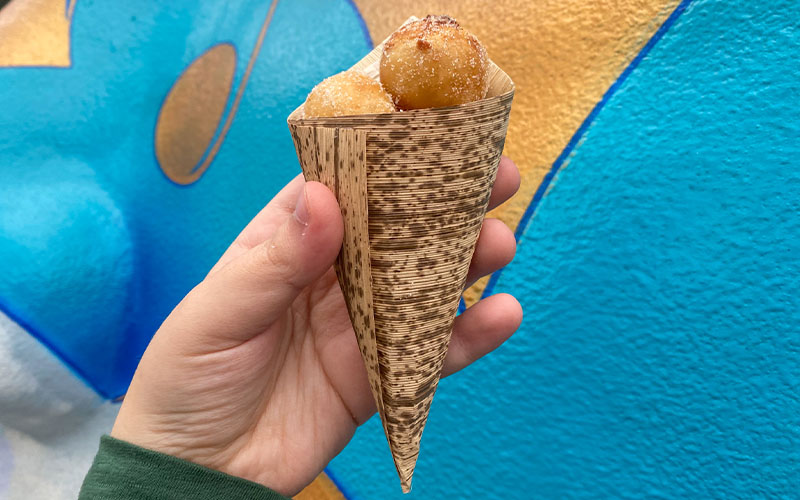 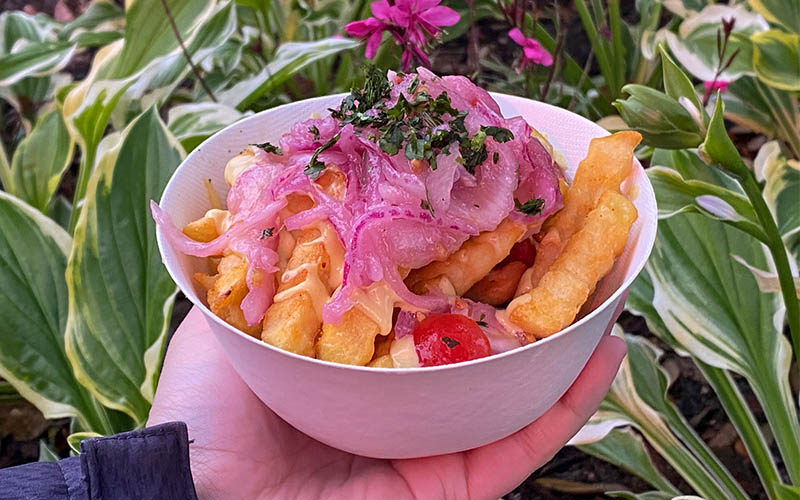 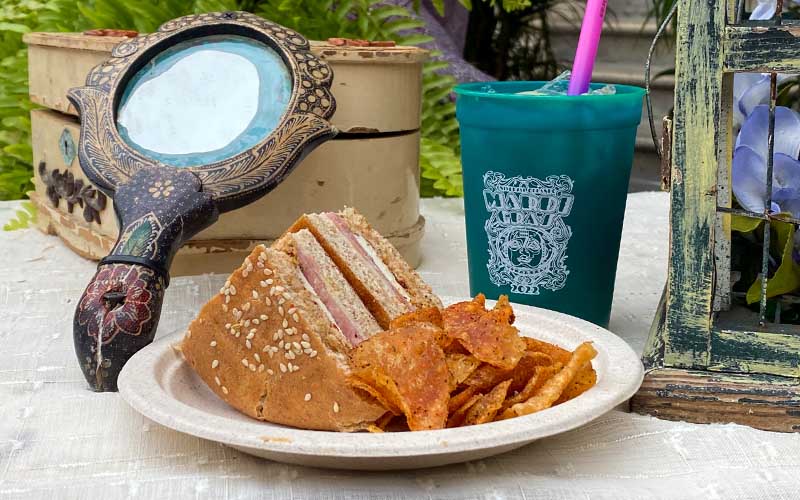 The muffuletta was perfectly filling and hit the spot when I was craving something savory. Leap also enjoyed the delicious mix of spices in the jambalaya. Tad and Lily split the Romeo & Juliet Coxinha which was very sweet and rich. Speaking of sweet, the king cake is a sugary Mardi Gras staple that we all shared and still had some left over. (Split it with as many frogs as possible! It's huge!) Leap washed it down with the Cosmic Cornucopia, a strong, cucumbery cocktail and I washed it down with the Piña Verde, a light and fruity offering.

Universal Mardi Gras Food and Drinks at CityWalk and the Resorts

The Mardi Gras festivities extend beyond the park! CityWalk joined in on the fun with specially-themed food and drink offerings in a number of venues.

Pat O'Brien's served up Biscuits & Gravy (honey glazed biscuits, andouille sausage gravy, pork cracklings), The Toothsome Chocolate Emporium and Savory Feast Kitchen concocted the Mardi Gras Rhythm & Shake (Ube Ice Cream with Nutella, Mardi Gras sprinkles, saxophone sugar cookie and a whipped topping) and Voodoo Doughnut conjured up the Banana Cream Pie doughnut (a yeast shell filled with banana custard dipped in vanilla icing, sprinkled with cinnamon and a touch of Nilla wafer on top). If you're a fan of mild flavors such as vanilla and banana and love a cream filling, this doughnut is an absolute win! 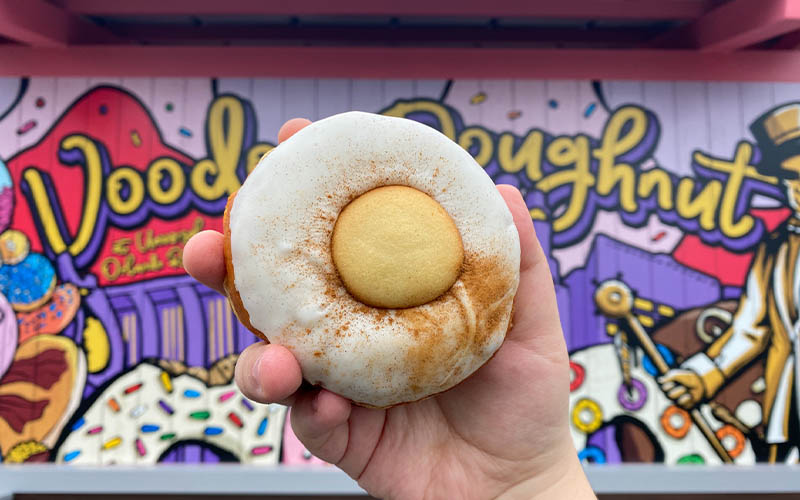 Whether you're staying at a resort as a guest or just stopping in for a delicious meal, you'll also find a variety of tantalizing menu items specially themed for the celebration at every resort on property! 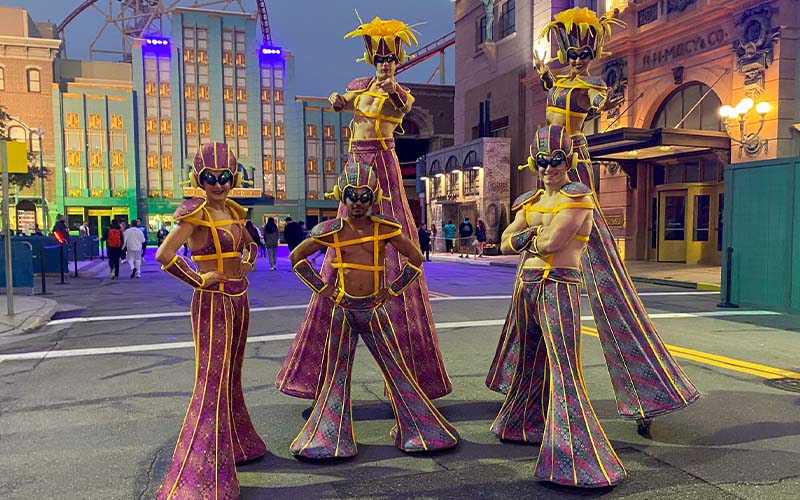 There's entertainment all day long to keep tadpoles and grown-up frogs hoppy! From joking jesters on stilts to extraterrestrial beings bringing les bons temps to Earth, there's something fun for everyone. Tad and Lily loved meeting all of the friendly alien life forms who came in peace to Mardi Gras last year! Roaming bands also play all around the park during the day. During our visit, we spotted them in front of the New Orleans: Planet Mardi Gras 1 booth, again in front of the Hello Kitty Shop and once more in front of The Tonight Shop. With blaring trumpets and beating drums, it’s hard not to dance along to the rhythm! 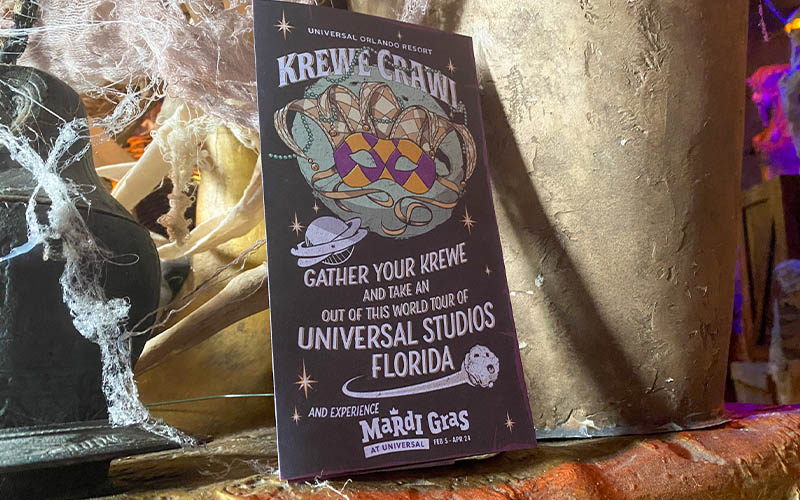 The Mardi Gras scavenger hunt was also back and in full swing last year. For $10, we got a treasure map of all of the Krewe Crawl spots, where we received a stamp from a team member at each location. Once all stamps were collected, we received a prize from Silver Screen Collectibles — an exclusive Krewe Crawl mask. 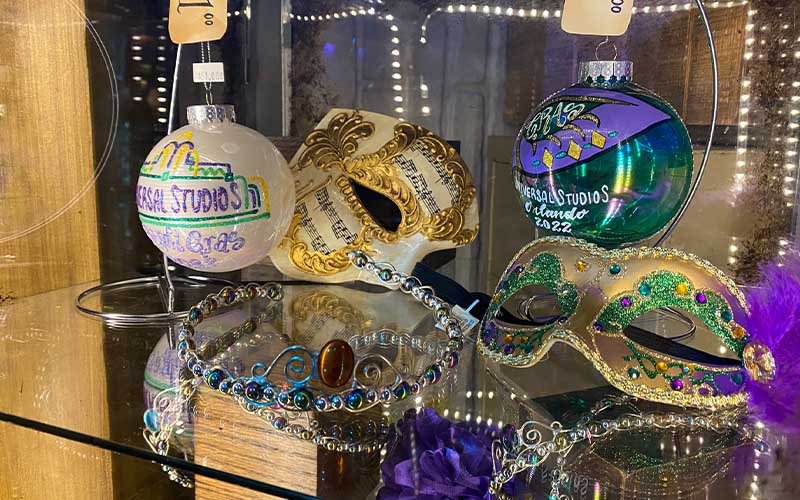 The incredibly themed Mardi Gras Tribute Store, located next to the Jimmy Fallon ride, also returned for 2022. Have you ever wondered what it takes to build a Mardi Gras float? In 2022, frogs entered the "Float Factory Warehouse," with four highly themed rooms that feature the creative process — including pencil sketches, scale models, parade decor and an actual, full-size Mardi Gras float! 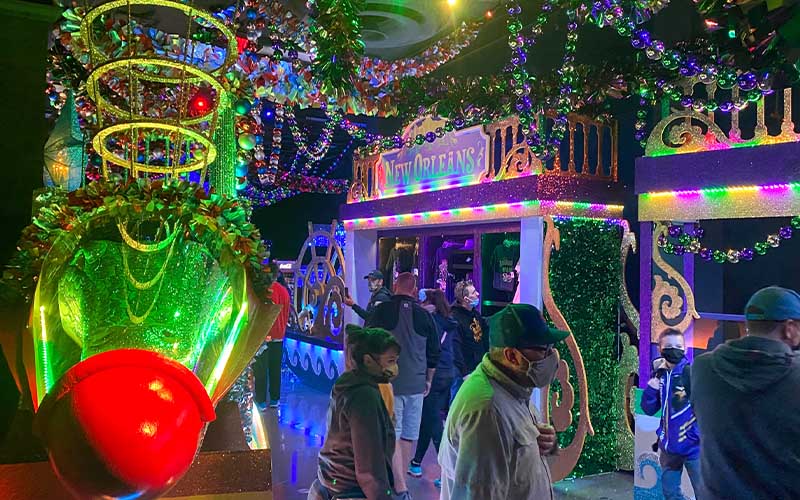 Not only can you get fancy beads, masks and event merchandise there, but there's also plenty of photo-ops, such as a throne fit for Mardi Gras royalty (alongside the bear statue from last year's HHN tribute store — appropriately decorated, of course) and the completed Space Gator float in all its galactic glory. See if you can spot some other fun Easter eggs, including a few appearances from the beloved holiday icon, Earl the Squirrel!

Universal Mardi Gras is the closest thing you can get to N'awlins ... without having to worry about your tadpoles seeing or hearing anything they shouldn't. The festive floats, atmospheric decor and delicious cuisine really give your little ones a taste of the Big Easy, which is a fun exploration of a different celebration they might not be familiar with. Allow your kiddos to try new foods, interact with performers and catch all the beads they can! (Fun fact: The floats in the Universal Mardi Gras parade are designed by Kern Studios, which has created authentic floats in New Orleans for over 60 years!) 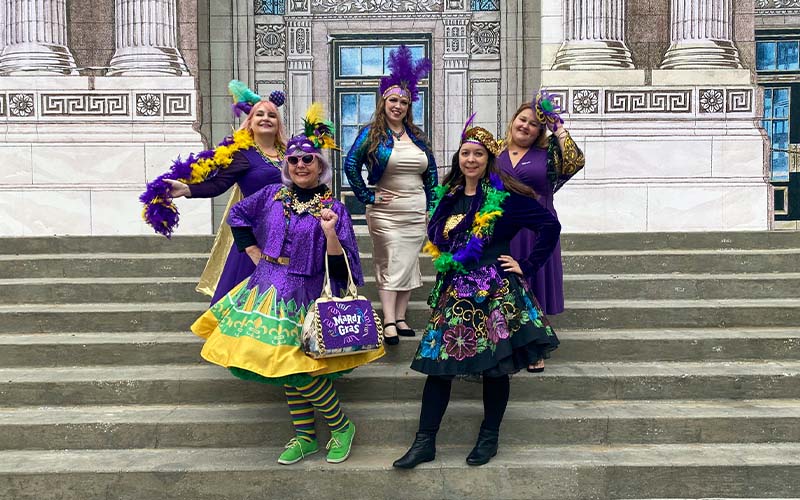 Are you ready to put your dancing shoes on and visit Orlando's version of the Big Easy? You're sure to have a blast! Let us know if you have any questions about Universal Mardi Gras in the comments below.

SAVE $61 vs Adult gate price

SAVE $44 vs Adult gate price