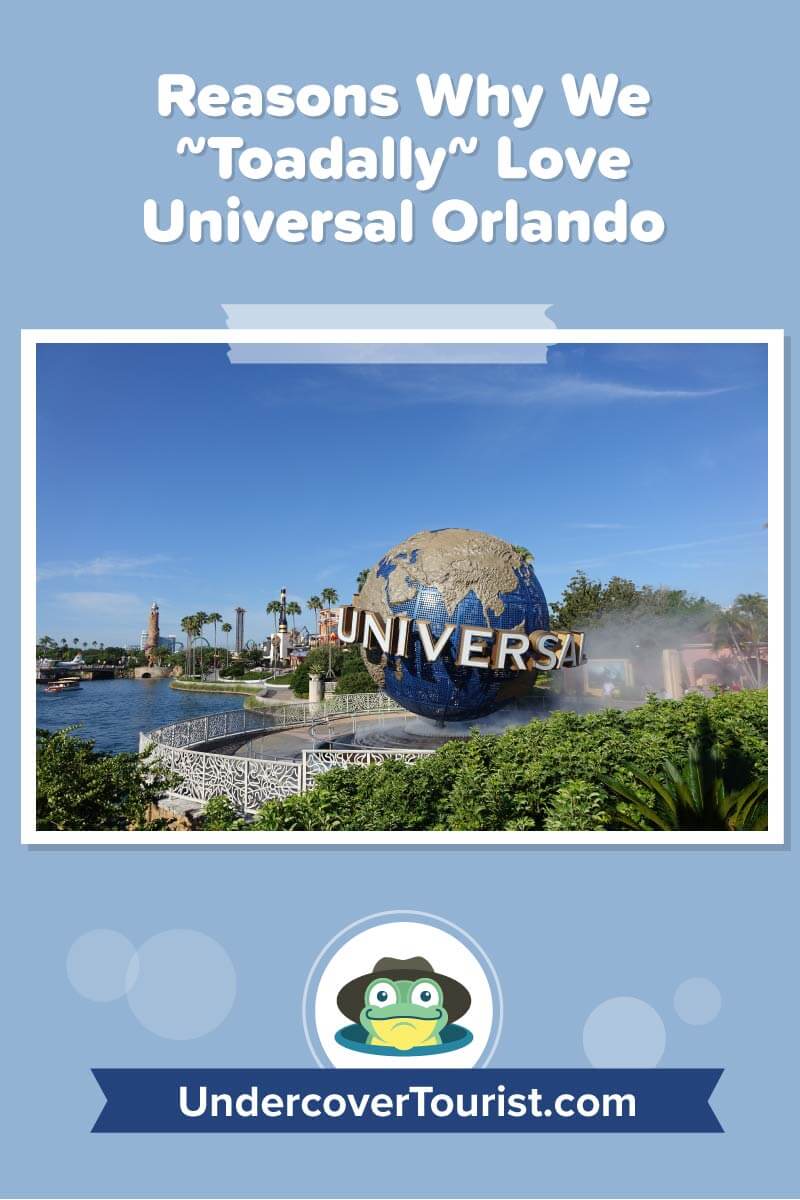 With the announcement of Universal Orlando Resort reopening June 5, 2020, your favorite green frogs are hopping all around our pond with excitement! We know these past couple of months have been trying for everyone, and this news couldn't have come at a better time. While we were staying safe at home, we came up with these reasons why we love Universal Orlando Resort. After all, "Happiness can be found even in the darkest of times, if only one remembers to turn on the light," as said by Albus Dumbledore in "Harry Potter and the Prisoner of Azkaban."That wise, old wizard was right. Light has overcome the darkness, and we can't wait to be back at the parks!

Why We Love Universal Orlando Resort

As a family, we've come up with five major reasons why we love Universal Orlando to keep the optimism going until the parks open back up.

The Wizarding World of Harry Potter 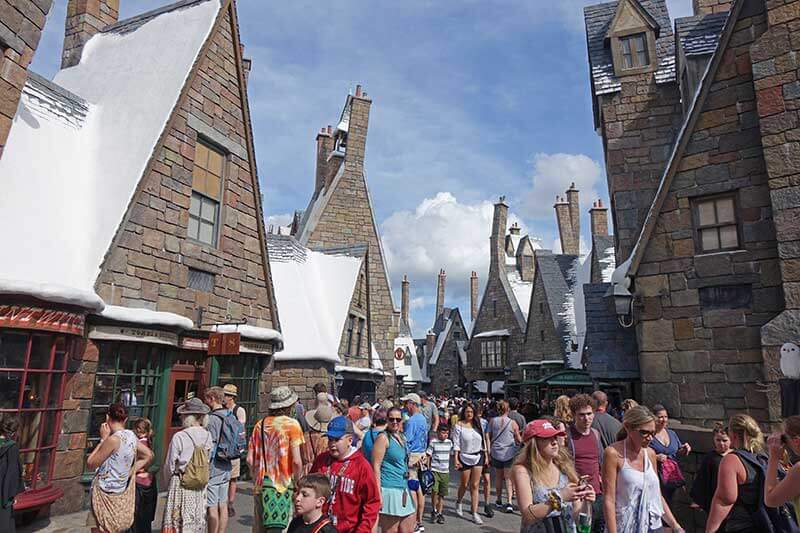 I think I can speak for the rest of my Frog Fam when I say that we’re all huge Harry Potter fans. (Who else is a Ravenclaw?!) So, it’s not surprising that the Wizarding World of Harry Potter is one of the main reasons why we love Universal Orlando Resort! Not only can we visit Hogsmeade and Hogwarts Castle, but also Diagon Alley. To top it off, we can take the Hogwarts Express back and forth between the two parks. There’s something magical about seeing these places from the Harry Potter series come to life in “the muggle world.”

The Wizarding World of Harry Potter has two immersive lands filled with rides, restaurants, shops, shows and — perhaps my favorite — interactive spell locations. If you live for thrill rides like me, then you’ll love Hagrid’s Magical Creatures Motorbike Adventure. It truly feels like you’re flying on Hagrid’s (well, technically, it’s Sirius Black’s) motorbike through the Forbidden Forest. Of course, you can’t froget about Butterbeer. The frozen version (or ice cream) is perfect for hot Florida days. But for me, what really sets the Wizarding World of Harry Potter apart are the interactive wands. It doesn’t matter if you’re a tadpole or a grandfrog. Anyone can cast a magical charm throughout Hogsmeade and Diagon Alley! 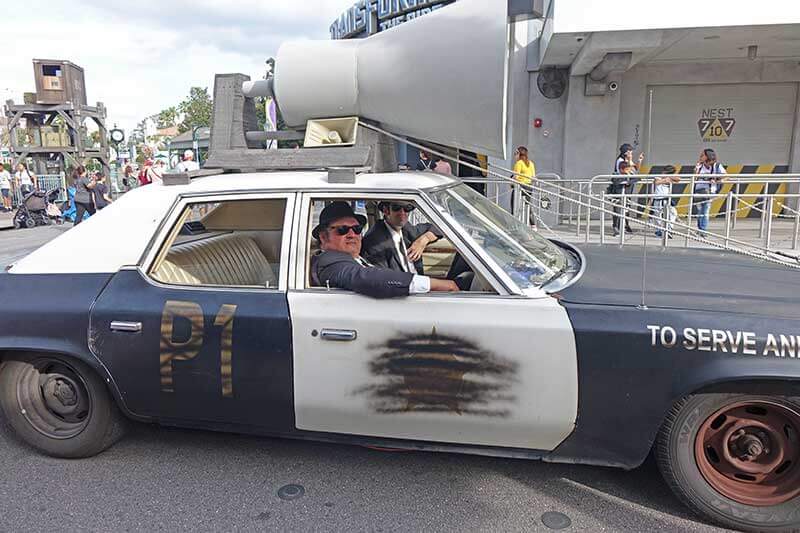 At Universal Orlando, you can come face to face with a hodgepodge of characters from all kinds of movies and television shows. Over at Universal’s Islands of Adventure, join forces with superheroes (or villains, if you’ve got an evil side … muahaha!) at Marvel Super Hero Island or face a dinosaur at Raptor Encounter. In Seuss Landing, you may spot The Cat in the Hat, Thing 1 and 2 or Sam I Am, just to name a few.

It doesn’t end there! Universal Studios Florida has a lengthy lineup of characters to meet, including Minions, Shrek and Donkey, Optimus Prime, Hashtag the Panda, the Simpsons family, SpongeBob SquarePants and more. If you’re lucky, you may even (literally) run into Doc Brown from “Back to the Future,” who often roams freely between the streets of Hollywood and the area by Animal Actors. Also, once when we were eating ice cream inside Schwab’s Pharmacy, Velma came in asking everyone if they’ve seen Scooby Doo. If you want to see as many characters as possible, stick around for the daily Universal’s Superstar Parade.

So Many Food Options 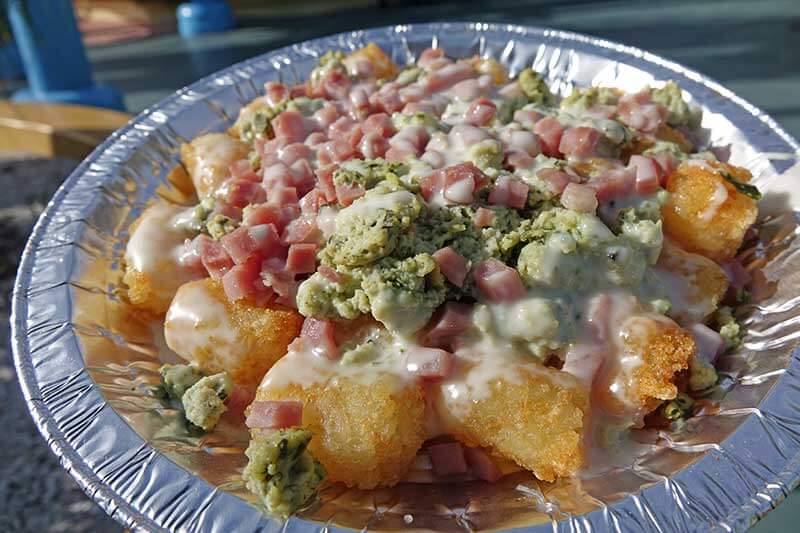 For all the foodie froggies out there, know that there is no shortage of delicious food, themed drinks and Insta-worthy snacks. I already mentioned Butterbeer in the Wizarding World, but that’s just the beginning. You finally have a chance to try a Flaming Moe and a Big Pink Donut in Springfield, or Moose Juice and Green Eggs and Ham in Seuss Landing.

Looking for comfort food? The quick-service restaurants serve burgers, chicken tenders, pizza and tacos for the usual theme park fare. But there are also more adventurous options at Mythos Restaurant, which serves Mediterranean and Asian-style dishes, including souvlaki couscous and pad thai. For vegetarians and vegans out there, Universal’s got your back. We’ve rounded up some of the best places to get plant-based meals for our extra-green frog friends.

I toadally get the struggle of figuring out what to eat. And it doesn’t help that Universal CityWalk practically doubles the options. We think it’s best to eat somewhere in CityWalk if you’re park hopping and passing through or want a nice dinner at the end of a fun-filled day.

Universal Orlando celebrates holidays and special events all year long. At the beginning of each year, Universal kicks off Mardi Gras with festive floats and food. It also brings a concert lineup with some of the biggest names from different genres of music. Lily and I always have a huge collection of beads after the Mardi Gras season is over. Fast forward to the end of the year, both Universal's Islands of Adventure and Universal Studios Florida are decked out in garland and Christmas cheer. Universal’s Holiday Parade featuring Macy’s, the Grinchmas Who-liday Spectacular and Hot Butterbeer make the holiday season at Universal Orlando feel complete.

Notice anything missing from this list? Well, I saved the best for last … Halloween Horror Nights! This is by far Universal Orlando’s most popular event of the year. Who doesn’t like staying up late and walking through haunted houses? This event is too intense for young tadpoles, so we leave Lily at home with the grandfrogs. I only recently started going after lots of begging and promises to do extra chores. Anyway, Universal crafts haunted houses and scare zones from scratch each year to maximize screams during the spooky season.

Variety for Everyone in the Family

We love Universal Orlando Resort because the parks have something for every single member of the family. Lily enjoys riding Woody Woodpecker's Nuthouse Coaster and meeting characters in Seuss Landing. I love the epic roller coasters such as The Incredible Hulk and Hollywood Rip Ride Rockit. Mommy Frog likes the shows, especially the Horror Make Up Show. (She’s pumped for the Bourne Stuntacular!) Meanwhile, Dad favors the action-packed simulation rides, such as The Amazing Adventures of Spider-Man and Transformers: The Ride 3D. No matter your interests, Universal Orlando Resort's got you covered!