Here's How to Use Universal Orlando's Virtual Line Experience Effectively

A note from Mommy Frog: The only experience currently utilizing a virtual line is The Grinch Meet & Greet at Honk Honkers. Officially, the reservation system is supposed to open when the park opens. We quickly learned that it's actually opening several minutes before that. If you want to score a meet with the Grinch, be sure to be on Universal Orlando property by 8:40 a.m. Keep refreshing the official Universal FL app until the system opens. As soon as you're allowed, select the amount of frogs in your party and book your slot. Keep trying even if you're getting a message that says No Times Available. (We received that message at 8:42 a.m. but then were able to score a pass for 12:10 p.m. at 8:45 a.m. At 8:49 a.m., we saw a yellow banner that said No Virtual Lines Times Left on the app and that didn't go away for the rest of the day.) Best of luck, froggy friends! 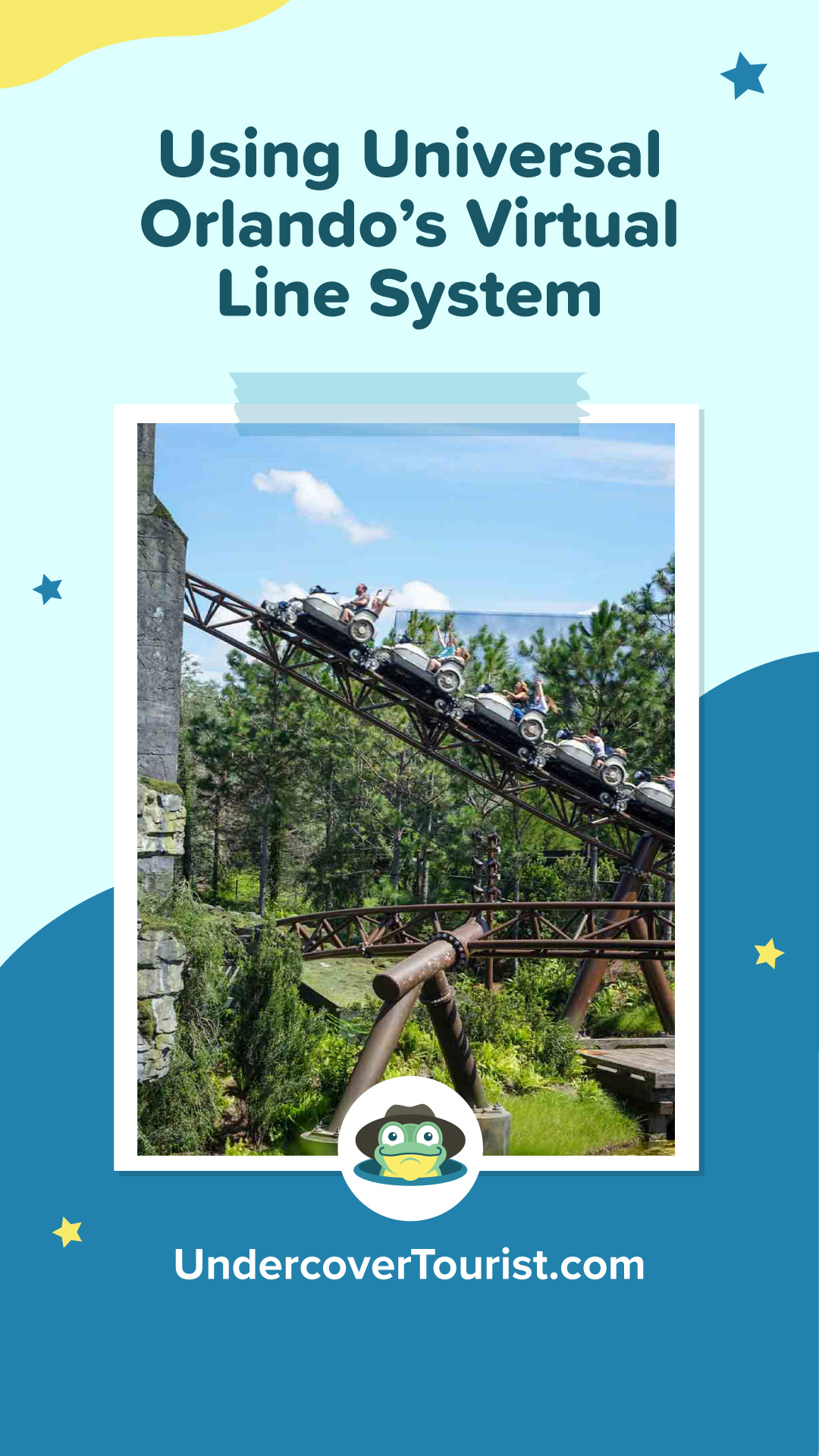 One of the biggest changes over the last year at the Universal Orlando theme parks is the revamped Virtual Line Experience system. In the past, Race Through New York Starring Jimmy Fallon and Fast & Furious - Supercharged already had existing virtual queues that would give you a return pass at a kiosk near the ride’s entrance or through Universal’s mobile app. But now the Virtual Line Experience system has expanded to include even more popular rides. So far, the system has been hit or miss for us. We’re here to tell you about our experiences with it, along with some tips and tricks!

What Is the Universal Orlando Virtual Line Experience?

The Universal Orlando Virtual Line Experience allows you to reserve a ride time for your frog squad for the most hoppin’ attractions at Universal Studios Florida and Universal’s Islands of Adventure using the Universal app (so be sure to download before your visit!). (Universal’s Volcano Bay continues to use its unique TapuTapu virtual queue system.) If you have an Express Pass, you may go straight to the Express queue without having to make a Virtual Line pass, as long as the Express queue is not at capacity. The only exceptions are Hagrid’s Magical Creatures Motorbike Adventure and Jurassic World VelociCoaster, which do not have Express access. Unfortunately, there isn't a way to check for Express queue capacity in the app, and this can vary by attraction.

You can only make same-day reservations while you’re on Universal Orlando property. (So, guess what we do first thing when we arrive at CityWalk … attempt to get passes for Hagrid’s!) It will allow you to set your group size, up to eight frogs, for a maximum of two different rides at a time. The timeframes for the two Virtual Line passes cannot overlap. Once you use a pass, you can make another one for a different ride (or the same one if you choose), as long as passes are available.

Rides With a Virtual Line 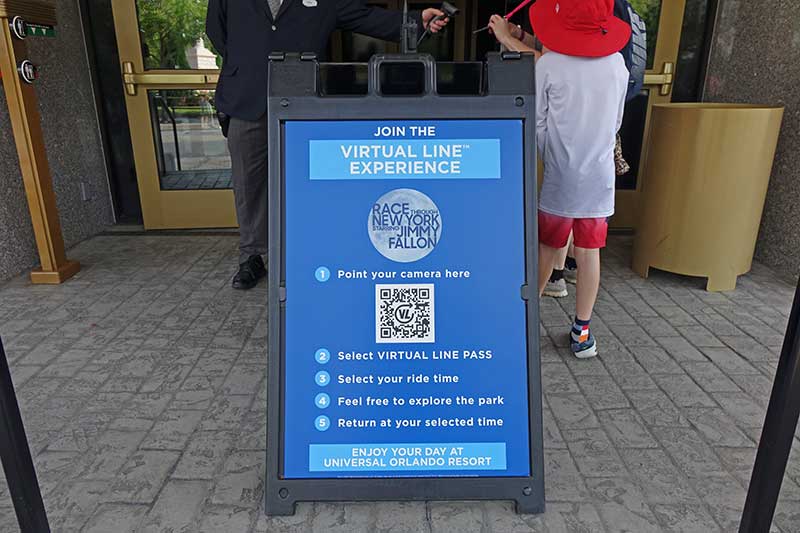 In the early stages of Universal Orlando's reopening, we had seen the following rides use a Virtual Queue, but we have not seen any of them being utilized lately: 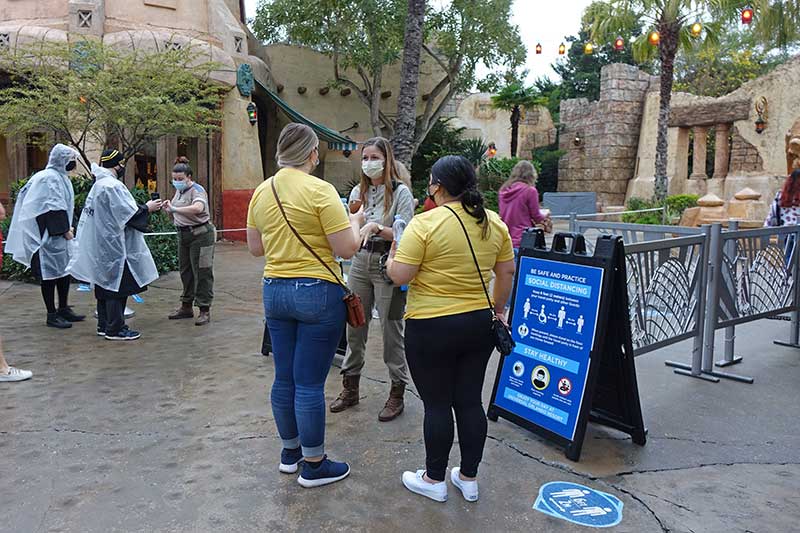 Hagrid’s has been the most consistent with using a Virtual Line, but it can still be a toss up when it comes to the ride actually utilizing its Virtual Line.

How to Reserve a Virtual Line Pass

When guests select a ride in the app, it will show half-hour timeframes to select, if available, once you submit how many guests are in your party. You can add up to eight guests to your reservation. Once your time is confirmed, you'll get a QR code that a team member will scan when you return. As we mentioned before, you can only book the day of your visit, and you'll need to be on property to grab a pass. You are able to book up to two different Virtual Line passes that do not have overlapping times.

We've had mixed results when reserving Virtual Line passes. There have been some visits during which we were unable to get any. Whenever timeframes showed up, there would be an error message when we tried to select one. On those days, the parks were busier, so many frogs were trying to get passes at once. If that hoppens, team members suggest quitting and rebooting the app, as well as connecting to Universal's Wi-Fi network.

During different previous visits when crowds were lower, Hagrid’s was the only ride using a Virtual Line all day long. Virtual Line passes can go fast, so you’ll need to hop on it quickly if you spot any available times! (And know that sometimes, you may still receive an error message when trying to confirm.) During a previous visit with lower crowds, we noticed Hagrid's utilized its Virtual Line within a half-hour of the park opening. It was easy for us to get a pass around 8:30 a.m. when the Virtual Line initially opened, but by 9 a.m., all passes were gone. The app tells you certain times to check back for additional releases (such as 2 p.m.). We started checking around 1:50 p.m. and didn't see any available until right on the dot. Once it hit the top of the hour, passes became available before running out two minutes later. However, on a busier day, we tried getting passes during a couple of the additional release periods, but we had no luck.

If you’re able to successfully get a Virtual Pass, the QR code will show up at the same spot where you reserved it in the app. We suggest taking a screenshot in case you experience any technical glitches. You also have the option to edit your reservation’s time or party size, but we highly suggest not doing so, especially for a popular ride such as Hagrid’s. Otherwise, you risk losing the Virtual Pass that you originally made and not being able to find a new one. (If you try, it will say there are no available times and you can keep the original pass. But we don't recommend deleting it as a way to find new times.)

Once you check-in for your return time, you do still have to wait in line. The Virtual Line Experience mainly helped control capacity in the queues during the pandemic. Because there were fewer frogs in line than normal and everyone was spread out, the line moved quickly. We waited in line for Hagrid’s for about 30 minutes. Now that physical distancing isn't required, the Virtual Line system has not been utilized as much, but it could always return if crowds are high. We suggest arriving to the parks early enough to snag passes — no matter which park you're in. 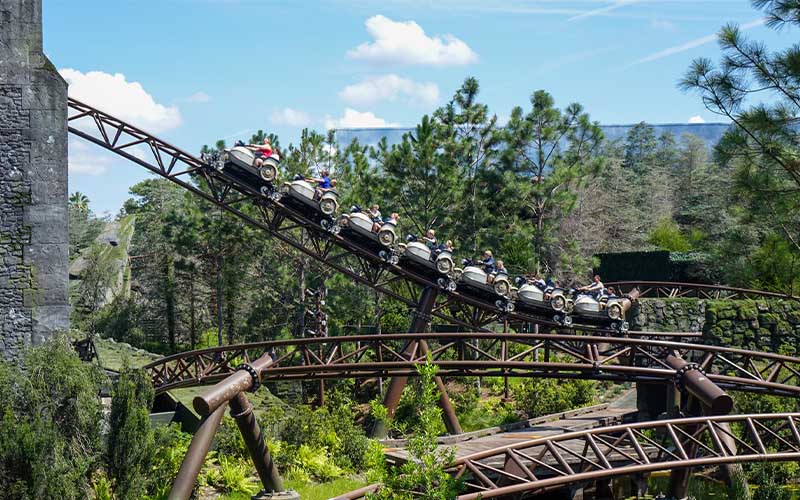 Do you have any questions about Universal Orlando's Virtual Line Experience system? Let us know in the comments below, and we'll help you out!

Related: Universal Orlando's Reopening Guidelines and What to Expect