Our ~Toadally~ Cool Tips for Visiting Universal Orlando in the Summer 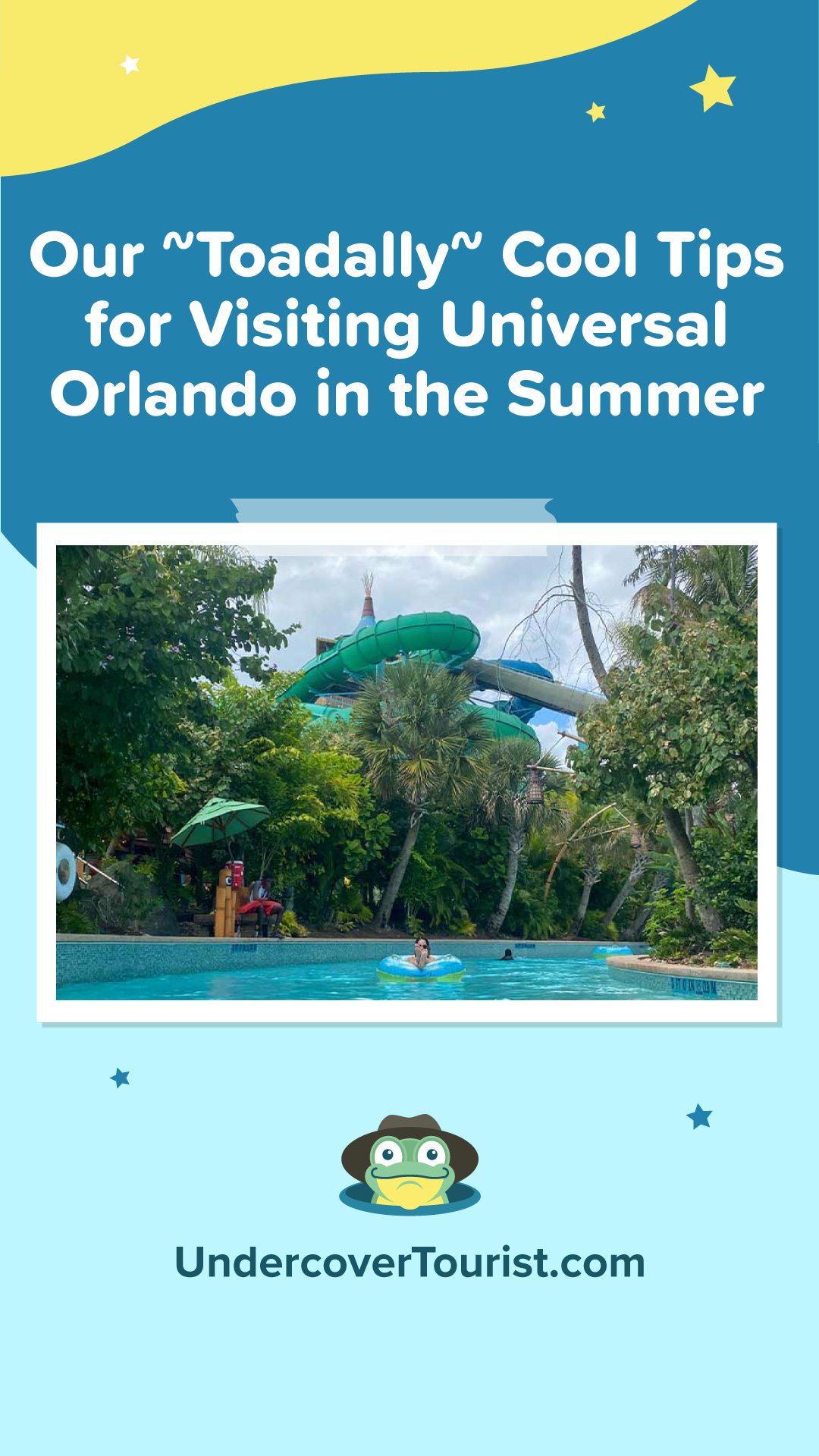 As parents, we get it. Sometimes the only time available to plan a family vacation is during the long-awaited summer break. While not particularly ideal, we've learned there are plenty of ways to make the best out of any situation — that especially goes for the large crowds and hot temperatures that are all too common in theme parks during the summer months. We've already written a blog with the best ways to stay cool during any time of the year at Universal Orlando Resort (because, well, Florida's sun can be unforgiving year-round) so I recommend checking out that post, as well! Here, I'm going to cover our best tips and tricks for making the most out of your trip to Universal Orlando, particularly during the summer. Sound like a plan? Perfect! Let's dive right in!

Our Top Tips for Enjoying Universal Orlando in the Summer

Whether you and your tadpoles want to get hopping to your first ride or grab some breakfast to fuel up for your epic day, one of the last things you want to do is wait in a long line to purchase tickets. During the summer, it's not uncommon to spend 45 minutes standing in that line outside the gates. Save time and money by purchasing your tickets online in advance through Undercover Tourist. Maximize your savings by selecting the exact dates you're going to be visiting the parks or maximize your flexibility by purchasing a ticket that allows you to go anytime!

Whichever ticket type you select, I highly recommend purchasing a park-to-park ticket. These tickets allow you to enjoy everything Universal has to offer in one day, so not only does that include a relaxing 15-minute ride on the air-conditioned Hogwarts Express but — if you opt for a 3-Park ticket — Universal's Volcano Bay, as well! We love starting hot summer days in the theme parks and ending them by getting drenched on water rides or floating our cares away in the Kopiko Kai Winding River.

Still a little unsure? That's toadally OK! We can help you out in our separate blog post if you're having trouble deciding which ticket type is best for you and your frog squad. 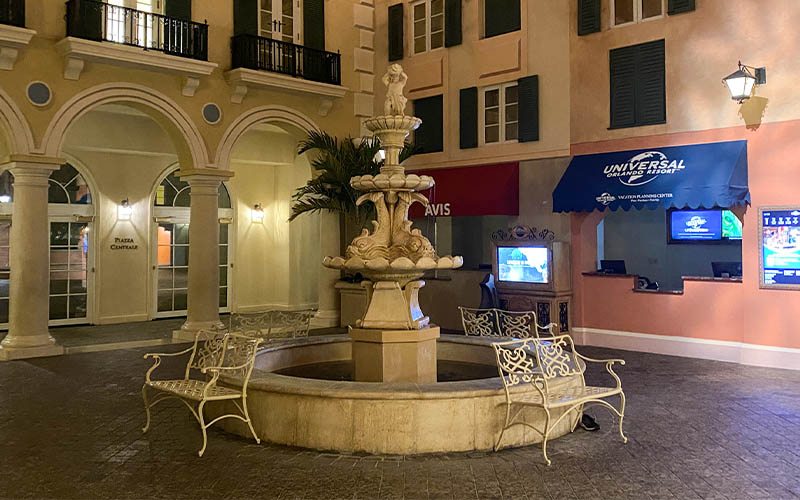 There are so many reasons why we love staying on-site at Universal Orlando Resort. To recap, all Universal Orlando hotel guests receive Early Park Admission, an amazing perk that allows you to access Universal's Islands of Adventure and/or Universal Studios Florida an hour early and Universal's Volcano Bay half an hour early. That extra ride time is invaluable and will help you avoid longer wait times in outdoor queues when the sun starts beaming down mid-morning.

On top of that, Universal Orlando hotels are all only a short walk, shuttle ride or boat ride away from the parks. This allows you the perfect escape from the heat mid-day if you've had an early start and want to head back later once the sun starts setting. Nothing beats a mid-day nap in an air-conditioned hotel room or a splash in a resort pool!

Get to the Parks Early

If spending a little extra green to stay on property isn't worth it for you, it's still toadally possible to have an epic day at the parks without being able to take advantage of that extra time in the morning. That being said, we still recommend arriving before the gates officially open. Team members tend to let non-hotel guests into the parks about 15 minutes or so before the scheduled opening time. At Islands of Adventure, we've used that time to head into Hogsmeade and conquer both Hagrid's Magical Creatures Motorbike Adventure and Harry Potter and the Forbidden Journey via the Single Rider line in less than an hour. At Volcano Bay, we've used that time to stake out the perfect spot on Waturi Beach under one of the shaded structures.

Plan to arrive at the park gates about 45 minutes prior to opening. Also be sure to factor in the time it'll take you to park your car, go through security and walk through CityWalk. Getting up with the sun may not seem so desirable in the morning but you'll thank your past self when you're able to more easily avoid the major crowds and afternoon heat later in the day.

As I just mentioned above, the Single Rider line is one of my favorite tips to avoid waiting in long lines and a must-do for any party that's OK with not riding an attraction together. That being said, parents with tiny tadpoles don't particularly have that luxury, so the next best option is purchasing a Universal Express Pass. This add-on allows you to skip the standby queue at every ride except Jurassic World VelociCoaster, Hagrid's Magical Creatures Motorbike Adventure and Pteranodon Flyers and get through the lines significantly faster. The standard Universal Express Pass allows you to skip the line at each ride once per day, but there's also an Express Unlimited Pass which allows you to skip the line at each ride as many times as you want! You know how I recommended staying on-site? Well, staying at any of the three Premier hotels actually grants you free Universal Express Unlimited. How cool is that?!

No one (especially easily irritated tadpoles) wants to stand in long lines with crowds of people in the heat of the day. With summer being one of the most popular times to visit the parks, this additional purchase can go a long way in helping you make the most out of your vacation. 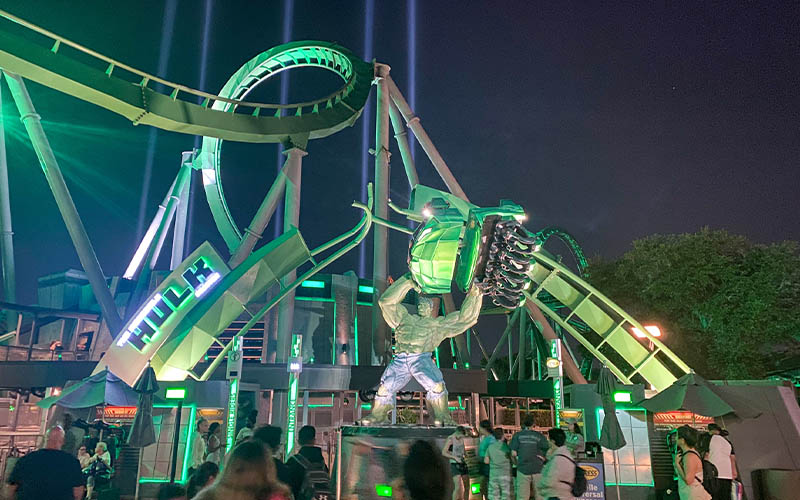 I briefly mentioned it above when discussing reasons to stay on-site but it's worth mentioning again. Heading back for a nap mid-day and taking advantage of the parks after dark is highly recommended and much more preferable to cutting your day short. Crowds inevitably tend to fizzle out once the sun starts setting, plus the temperature starts dropping. Additionally, riding outdoor attractions, such as The Incredible Hulk Coaster, at night when they're all lit up is a magical experience in and of itself! Speaking of magic, frogs of all ages will love The Nighttime Lights at Hogwarts Castle in Islands of Adventure and Universal Orlando's Cinematic Celebration at Universal Studios. What's great about the summertime is that there are no other festivities or events going on so these shows will most likely play every single night (weather permitting, of course).

Use a Park Plan

Going to any theme park during the summertime can be intimidating, to say the least. With hot temperatures and large crowds, it can be difficult to figure out the perfect game plan that will make your entire frog squad hoppy. Well, we've to the rescue with some frog-tested, frog-approved park plans to help make your day a little bit easier! Choose from a Universal Studios 1-Day plan, an Islands of Adventure 1-Day plan, a 2-Park 1-Day plan or a 2-Park 2-Day plan. These plans assume you're not staying on-site and aren't utilizing Universal Express so they truly help make every second count. We also have a General Plan that lets you know the best times of day for riding specific rides for froggies who don't want to arrive at park opening or want more flexibility in deciding what to do when. 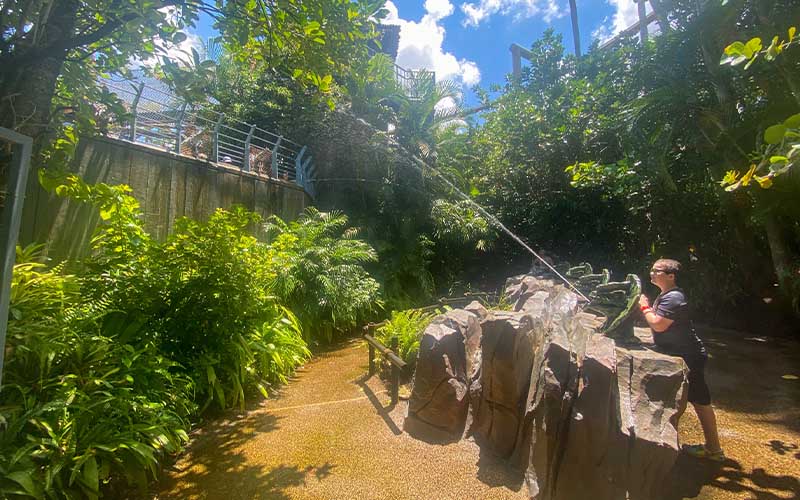 Of course, hitting up the various water rides at Universal's Islands of Adventure during the summer is a must but did you know there are plenty of other spots around both theme parks to cool down? Stop by the Mystic Fountain in the Lost Continent and see if you can correctly answer one of its riddles. (Prepare to get splashed either way!) Head on down to Camp Jurassic in Jurassic Park and soak your fellow frogs with dilophosaurus head water cannons. And don't froget to take a stroll through Toon Lagoon where you'll find several different splash pads and water elements you can interact with to keep you nice and cool. Over in Universal Studios, indulge in the refreshing mist sprinklers by the Animal Actors On Location! stage, splash around at Curious George Goes To Town in Woody Woodpecker's KidZone or try your hand at the "Aguamenti" and "Meteolojinx" spells over in Diagon Alley.

It's also of equal importance to stay hydrated! Bring a refillable water bottle. The parks have plenty of water fountains to fill it up! (Plus, you can save money if you're eating on a budget by bringing your own.) 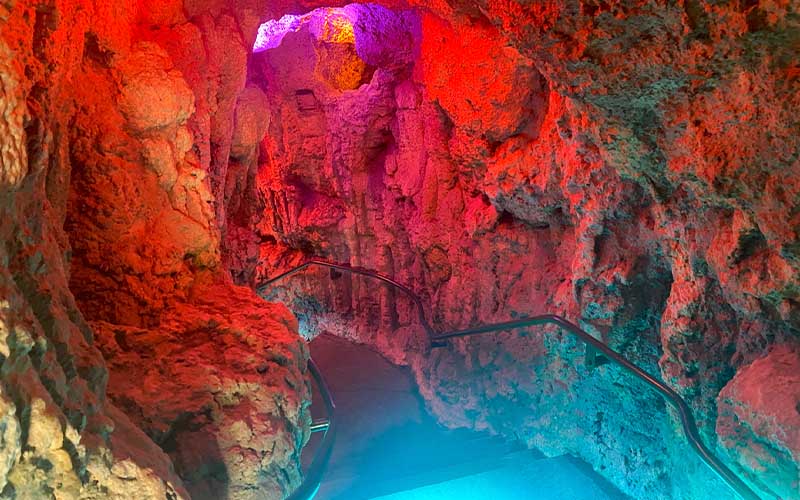 While interacting with those fun water features can be a lifesaver on a hot day, they're not exactly going to keep you cool for very long. If you're looking for places to be able to sit down, relax and cool off, Universal Orlando has many shaded areas to hide out under when the sun starts to boil down on you. In Islands of Adventure, my favorite places to relax are the Owlery in Hogsmeade where you'll find benches and fans, the amber mines in Camp Jurassic which are a stunning sight to see if you've never been and the back of Mythos in the Lost Continent looking out toward the water. In Universal Studios, the best places to hide out from the sun are Knockturn Alley in Diagon Alley which is one of the coolest places in either park (temperature speaking), Carkitt Market also in Diagon Alley which is perfectly shaded and a great place to indulge in a highly recommended cone or cup from Florean Fortescue's Ice-Cream Parlour and the picnic area outside Animal Actors where you'll find plenty of tables, chairs and yes, even fans! If you're looking for more spots that might not necessarily be shaded but will definitely give you a break from the large hoards of frogs in the parks, be sure to check out our list of the best places to take a sensory break.

Aside from everything you need to do to prepare physically, such as packing sunscreen, sunglasses, hats and rain gear (because it inevitably will start raining at some point during the day), preparing for your summer trip mentally is just as important. (That being said, we've listed our packing suggestions for the summer season!) It may not be the most ideal time to head to the parks, but it's still a great time and having a fun and memorable vacation can still be super easy! A lot of it is about attitude and knowing that you're going to be facing large crowds and unfavorable weather. As long as your frog squad's expectations are managed (and you follow some of my pointers above), you're sure to have an awesome vacation — no matter the time of year!

Have you been to Universal Orlando during the summer? What are some of your favorite tips? Share them with your fellow frogs in the comments below!

Related: How to Manage Summer Crowds and Heat at Universal Studios Hollywood

SAVE $44 vs Adult gate price