What to Do on a Rainy Day at Disney World

We understand that an essential part of planning any vacation is checking out the weather at your destination. Disney World is smack dab in the middle of Florida, which is known for its sunny weather year-round. However, it’s important to be aware that Florida’s main rainy season hoppens over the summer, which is when many frog families like to travel to the theme parks. While we can’t promise you a storm-free summer trip, we know exactly what to do on a rainy day at Disney World so you can successfully navigate the weather and avoid disappointment. 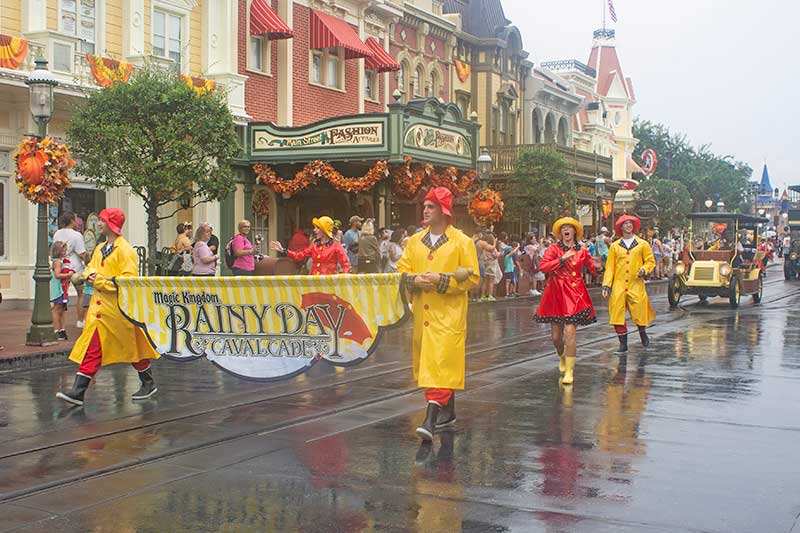 Overview of the Climate in Florida

With its warm, subtropical climate year-round, Florida is rightfully called the Sunshine State. While the winter months are fairly mild with an occasional rainy day followed by a cold front, the summer months can get quite hot and humid, so we have lots of hopful advice on how you can beat the heat.

On the other hand, Florida’s rainy season occurs during one of the busier vacation periods, June through October. If you’re visiting Disney World during this time, it’s almost a guarantee that you’ll experience an afternoon thunderstorm. Fortunately, these typical storms pass through as quickly as they come, usually only lasting about 30 to 45 minutes.

Because Disney World property covers such a large area, you may even find that it’s raining at one park but not the others. There’s been a couple of times when I’ve stayed with Lily at our hotel for an afternoon nap. Leap and Tad ventured out to the parks where they experienced a quick downpour, but it was bright and sunny at the hotel the entire time — go figure! Another Florida weather quirk is that outdoor attractions and kiosks generally shut down when there's lightning within 10 miles, no matter if it's actually raining or not. 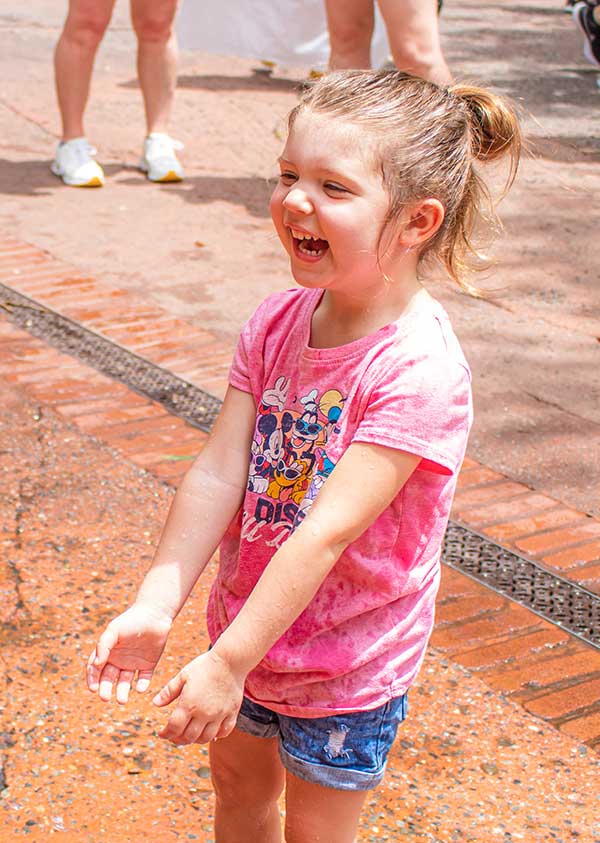 Hurricane season is important to keep in the back of your mind when scheduling your trip, but it shouldn’t deter you from your Disney planning. Peak activity happens from late August through early October. However, landlocked Orlando is located in Central Florida, which means it’s unlikely that a hurricane or tropical storm will hit Disney World with full force. There have been a few times in the past that Disney has closed all operations due to severe weather, but it’s a rare occasion.

While you can’t control the wacky weather, you can prepare for it and be ready to adapt. A bit of rain doesn’t have to dampen the fun! In fact, a quick storm usually cools down a hot day and drives away some of the crowds. There’s always a silver lining in those pesky storm clouds. Finish up an indoor activity and head back outside. Keep an eye out for a rainbow!

Packing for a Rainy Day at Disney World

Before we dive into specific strategies on what to do on a rainy day at Disney World, here’s a full breakdown of what to bring in preparation for some less-than-perfect weather. 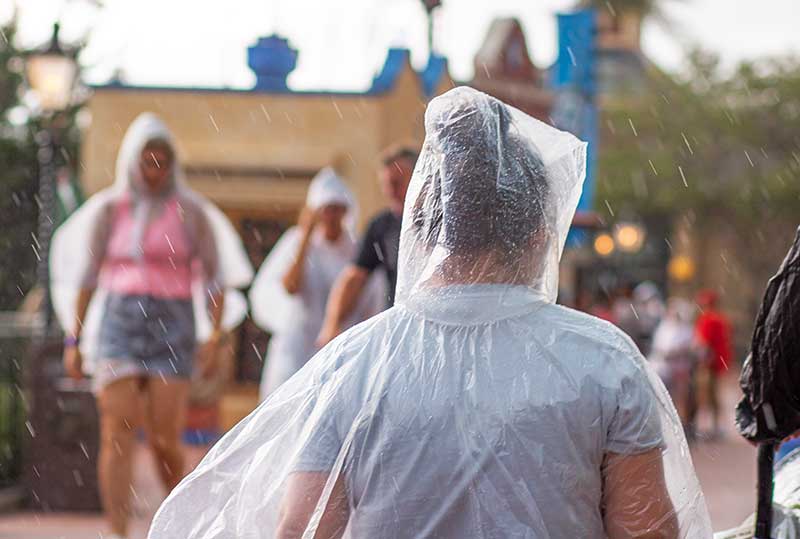 We prefer that everyone has their own poncho or raincoat rather than carrying around and sharing umbrellas. (Regular-sized umbrellas are allowed inside the parks, though!) Ponchos provide a bit more coverage, especially if there’s any wind that’s blowing rain in different directions. If you don’t have any or froget to pack yours, Disney gift stores have ponchos a-plenty for sale if you find yourself in a pinch. But you can save money if you buy them in advance at dollar stores, Walmart or multi-packs from Amazon. Just be sure to dry off all ponchos or umbrellas at the end of the day to prevent mold and mildew from forming.

For the summer months, avoid bringing a suitcase full of thick cotton T-shirts and jeans. Instead, opt for lightweight clothes or any fabrics that breathe well and wick away moisture. It’s not fun stepping inside an air-conditioned queue, restaurant or gift shop for cover, only to start shivering because you’re soaked to the bone. As for footwear, bring water-resistant shoes that are good for walking and have a good grip (so you don’t slip on wet surfaces!), along with an extra pair of socks (nobody likes soggy flippers). 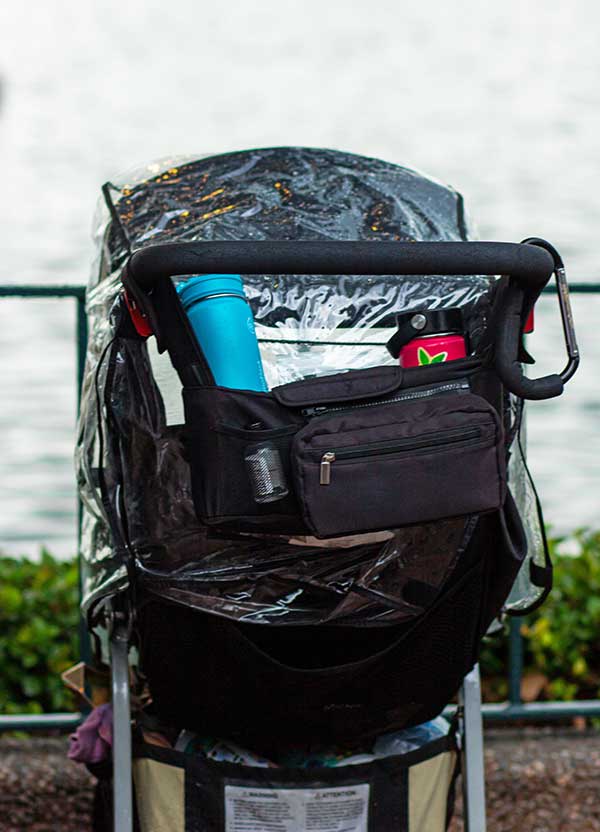 If you're bringing a stroller with you, a rain cover is a good accessory to have. It'll keep your tadpole dry if you need to walk in the rain, and the stroller itself if you have to leave it outside. Keep it on throughout the day, and zip it closed if you do leave it behind, just in case a rain shower comes along while you're inside. Nobody likes coming back to a soaked stroller! You can find fairly cheap ones on Amazon. In a pinch, a poncho works just as well.

A few simple Ziploc sandwich bags are perfect for keeping your wallet, phone or other electronics dry.

A small hand towel isn’t essential, but it can certainly come in handy (ha!). It’s just easier to wipe off extra moisture from rain (or sweat) than using paper towels that tear easily from the bathrooms.

Strategies for a Rainy Day at Disney World 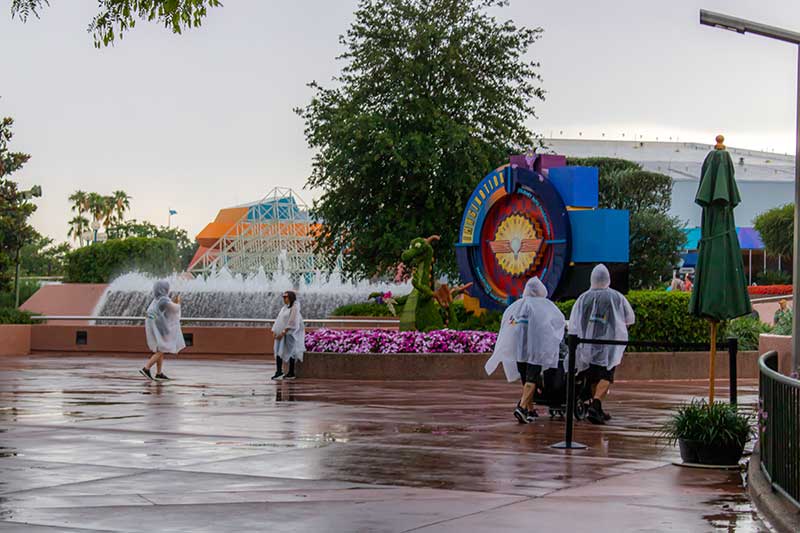 1. Plan Out Your Park Visits

Some parks are better to visit on rainy days than others. At EPCOT, the only attraction that would close due to weather is Test Track. Most of the other rides — along with plenty of restaurants and shops — are located in Future World and are relatively close together so you wouldn’t have to walk far in the rain. However, Disney's Animal Kingdom wouldn’t be your best bet because many of its rides and animal exhibits are outdoors and close down for bad weather. Everything is more spread out, so you’d be caught longer in the rain. Based on the usual summer forecast, we’d recommend a plan that includes visiting Animal Kingdom in the morning and EPCOT in the afternoon. Magic Kingdom and Disney's Hollywood Studios each have a fair amount of indoor attractions.

And while you're in planning mode, make sure you have access to a weather app with a radar feature. Because those afternoon storms can vary so much in location, we find that it's the easiest way to keep an eye on where and when to expect rain based on our current location (and when to put on those ponchos).

2. Get an Early Start

You’ve heard it a million times: “The early bird gets the worm.” Sorry, night owls. In this case, it’s generally true that the earlier you hit the parks, the more time you’ll have before a potential afternoon summer rainstorm comes through. (That said, check the weather forecast the night before and as soon as you wake up, because Florida weather can seem unpredictable — we've just learned to roll with it.) But this brings me to my next point. 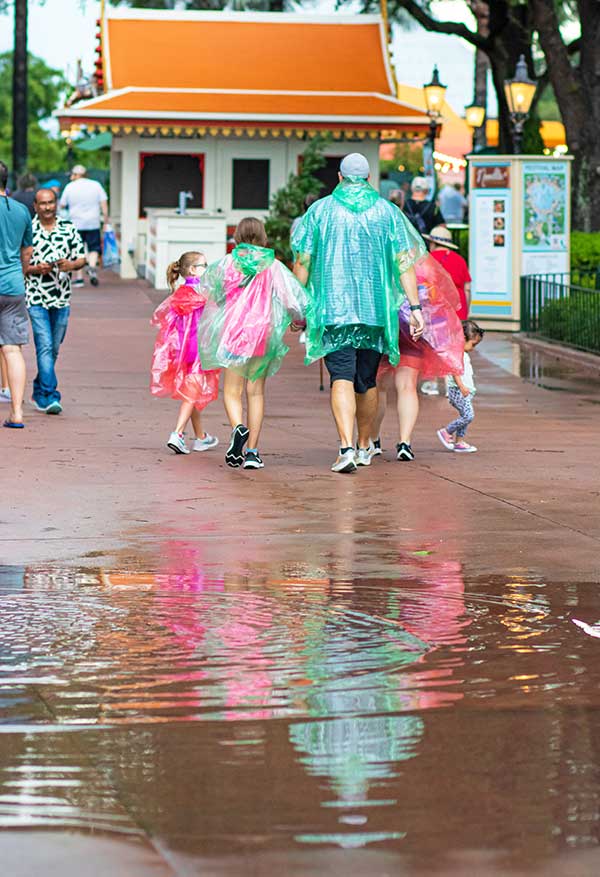 If you wake up early for the parks, consider taking an afternoon break before it’s supposed to rain (typically between 3 p.m. to 5 p.m.). Head back to your hotel for a well-deserved siesta. If you time it correctly, you’ll miss the worst heat of the day before the storms brew AND you’ll get to fall asleep to rainy weather. Even if you don’t actually sleep, it’s still the perfect time for you and the tadpoles to get some rest in the middle of a jam-packed day. Once the storm is over and you’re re-energized, it’ll be time for dinner and an evening at Disney Springs!

When park hours are reduced, we recommend pushing through until park close if possible, so you can maximize your time in the parks. But we certainly encourage taking longer breaks while inside the parks!

If you do hoppen to be at the parks during a patch of nasty weather, it’s the ideal time for indoor activities, such as having a nice meal at a table-service restaurant or shopping for souvenirs. Bear in mind that everyone else will have the same idea, so it may get quite busy. Another option is to hop in a long line for an indoor ride or watch a show. By the time the ride or show ends, the weather could easily clear up. It’s happened many times to us!

This tip goes hand-in-hand with our previous tip. When you’re already at the parks, it’s often worth waiting out the weather. Like we’ve mentioned before, these storms pass through quickly and before you know it, it’s back to being sunny again. People leave at the sight of looming clouds, so the parks become less crowded.

Don't worry if the weather cancels the daily Festival of Fantasy parade. Magic Kingdom has a special alternative to keep the magic alive when it's raining (and if there's no lightning in the area). You'll have to check out the "Rainy Day Cavalcade" that features characters riding in vehicles down Main Street, alongside dancers in rain gear.

Disney World is so large that there are plenty of other things to do on a rainy day. Have a spa day, go to the movies at Disney Springs or explore some of Disney's unique hotels by resort hopping. Contrary to what one may think, it can be a good time to visit one of the water parks. As long as there isn't lightning nearby, the water parks remain open during light rain. You're going to get wet either way! 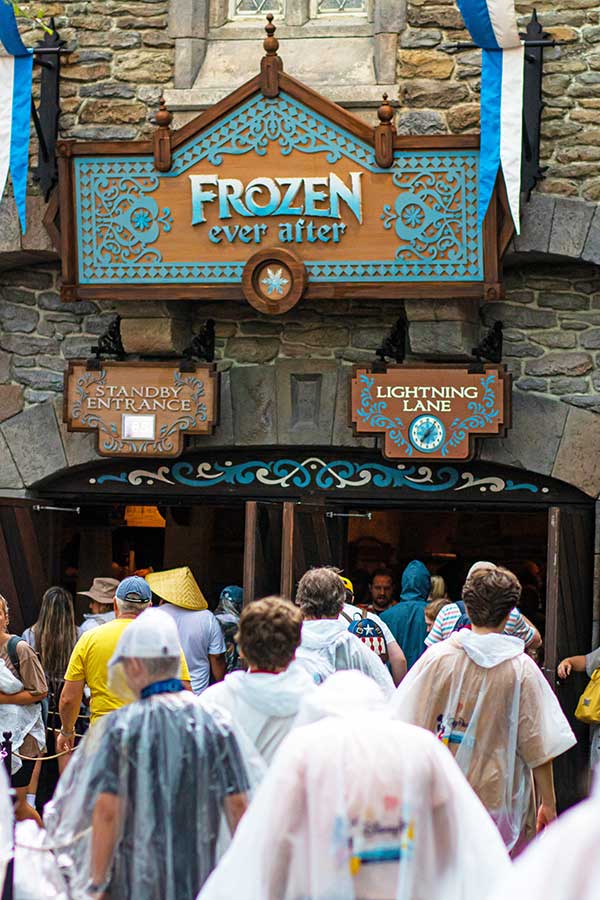 When it rains hard, we hop in line for rides, shows or characters that are indoors, including the queue. Here's a full list of the best attractions and shows to hit at each park when it's time to take cover from the rain. 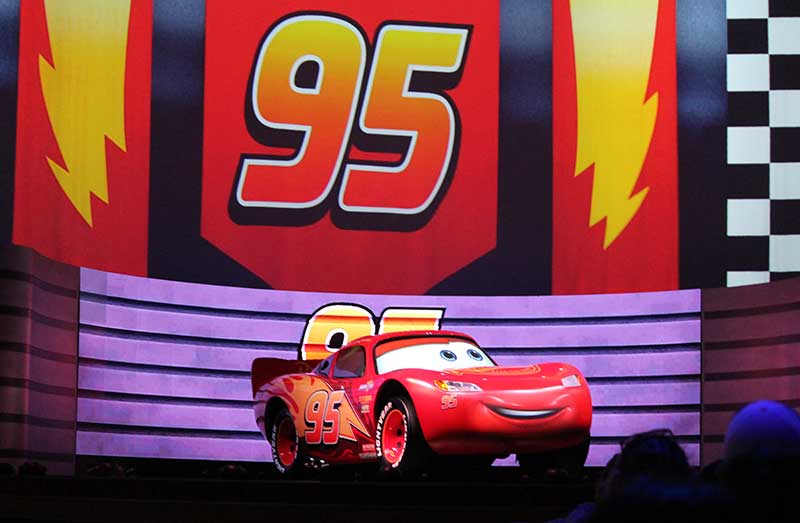 There are plenty of activities you can accomplish when you need to figure out what to do on a rainy day at Disney World. Is there anything we missed? Let us know in the comments below!

Related: How to Beat the Heat at Disney World