Our Favorite Reasons to Visit Universal Orlando Resort in Fall 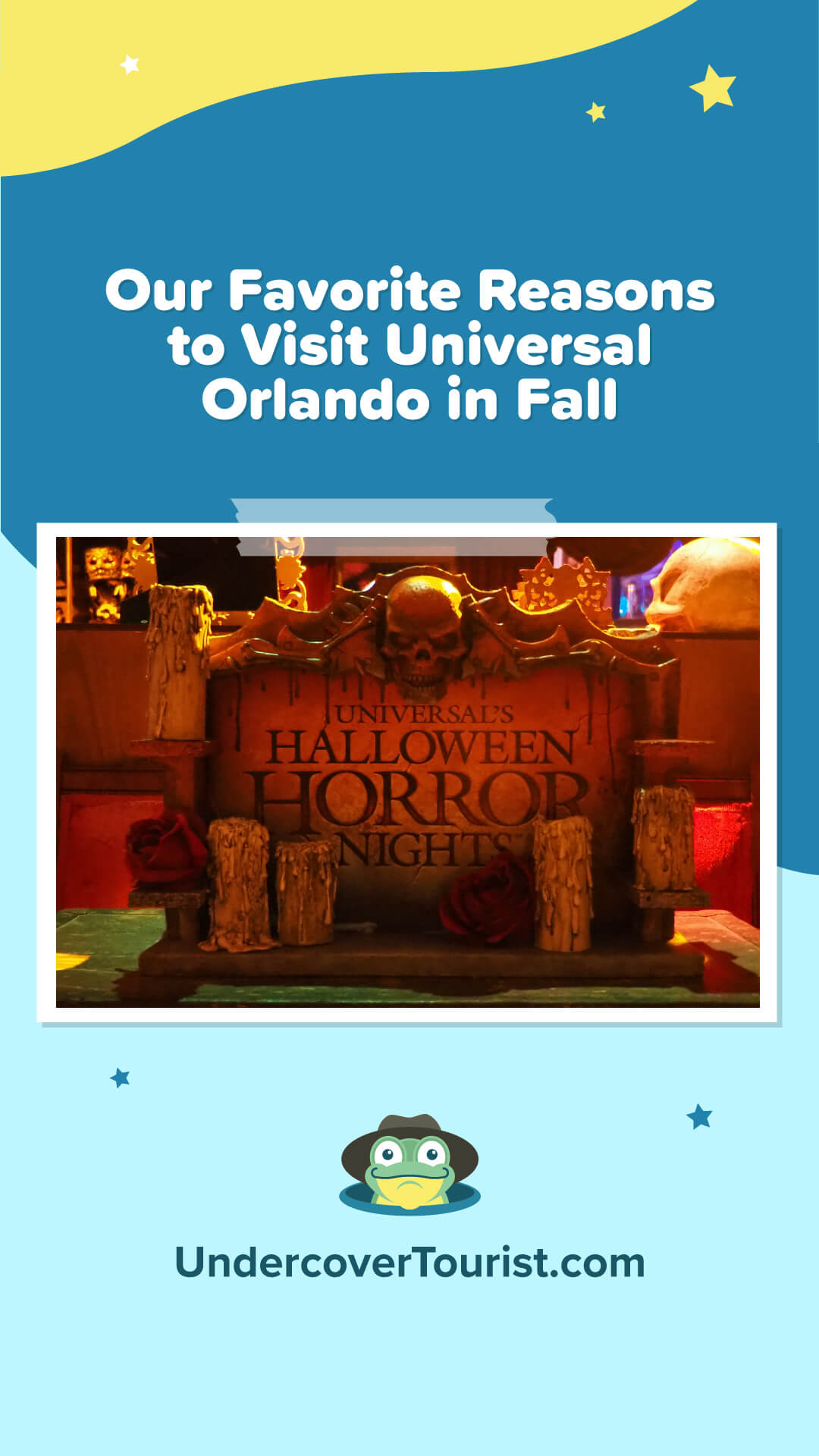 We love hopping to the lands of wizards, superheroes and minions any time of the year, but there's just something special about the fall season. Whether it's the beautiful weather, the seasonal spirit in the air or all-new experiences, we have quite a few reasons why we enjoy visiting Universal Orlando Resort in the fall. Let's explore all of the fall fun in store this year, starting with the nation's premier Halloween event!

Our Favorite Reasons to Visit Universal Orlando This Fall

Universal Studios Florida has once again pulled out its greatest tricks and treats to deliver 10 houses, five scare zones and two shows at Halloween Horror Nights. From "Universal Monsters: Legends Collide" — which resurrects the greatest creatures to grace the silver screen — to "The Horrors of Blumhouse" — which pits you against two of Hollywood's newest monsters — every house is sure to have your frog legs hopping several inches off the ground. The two shows that are haunting this year's event are also a great opportunity to slow down and catch your breath in-between scares. The event runs from Sept. 2 to Oct. 31 so there's plenty of time to get in on the terror! 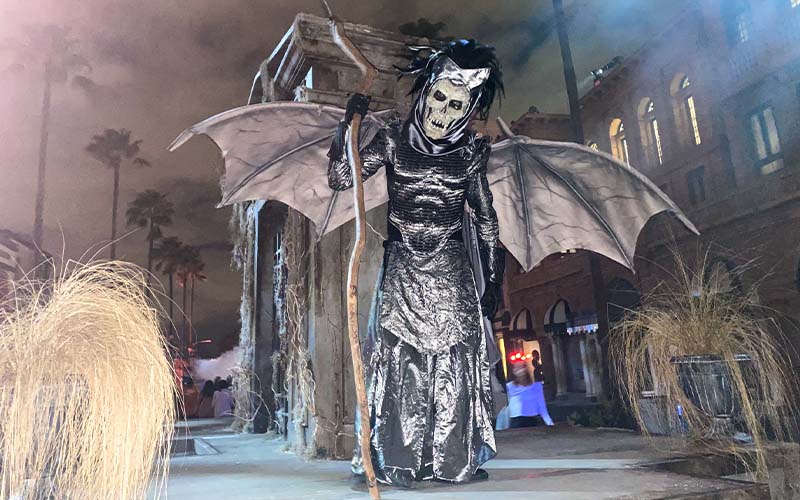 Save some green on a single-night ticket when you purchase through us and read up on all the event has to offer over on our ghastly guide to Halloween Horror Nights. If you're not a huge horror fan and are just looking to test the waters — er, fog — before conquering all the event has to offer, be sure to check out our scaredy-frog's guide to Halloween Horror Nights Orlando to see how you can enjoy all the treats without any — er, most — of the tricks. 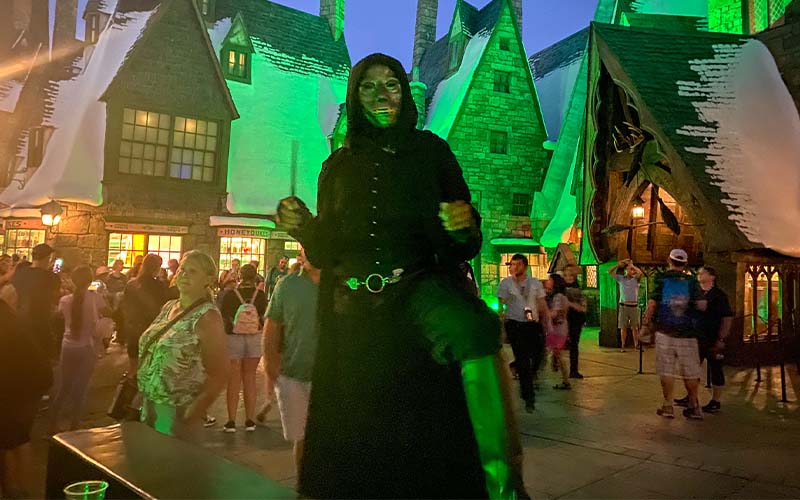 Over at Universal's Islands of Adventure, once the sun goes down, fog and green light fill the air as Death Eaters infiltrate the streets of Hogsmeade. If you're not ready to come face-to-face with the creatures of the night over at Halloween Horror Nights, this is a good starter scare zone to test your (spell) limits. (Young wizards are even encouraged to "duel" with the Death Eaters. Tad was more than ready to take on the challenge!) If you're lucky, you might even catch some magical effects when you least expect it! 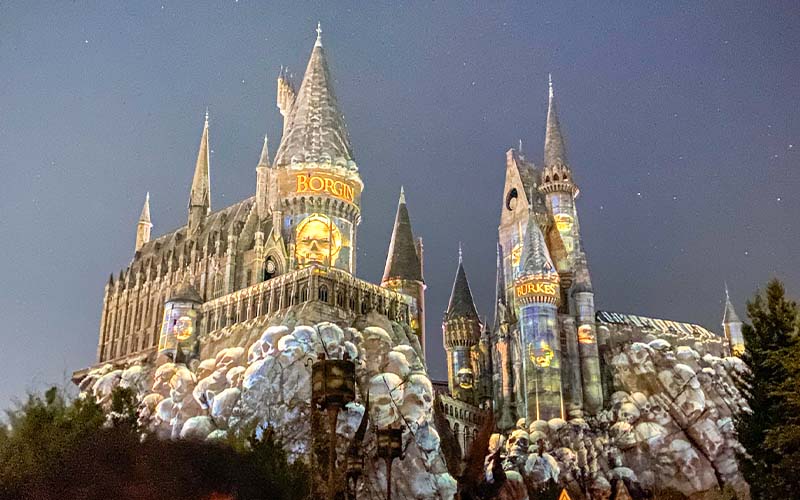 However, that's not all Hogsmeade has to offer. Watch in awe as Lord Voldemort summons Dementors, Inferi and other unspeakable creatures to storm the halls of the castle in this sinister projection show featuring lights, music and fireworks. The eight-minute-long show runs nightly once the sun goes down and repeats approximately every 20 minutes until the park closes. 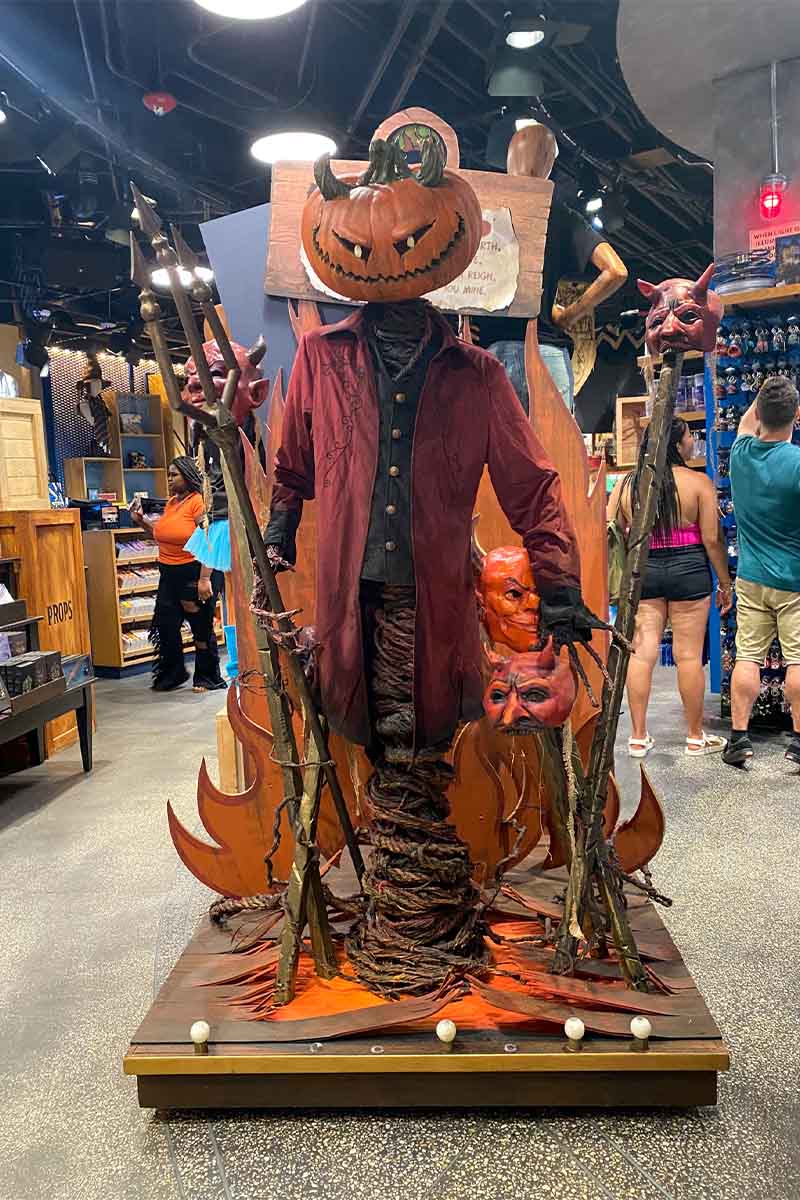 Have you heard about the annual Scarecrow Stalk? Every year from September to October, delightfully decorated scarecrows are hidden all around Islands of Adventure, Universal Studios and Universal CityWalk.

Purchase a map (which comes with a Lil' Boo suncatcher) for $10 to find the 13 different displays around the resort. Each location sells a spooky suncatcher inspired by the respective scarecrow display. Collect them all (or as many as you can) for $12 each!

From exploring the Tribute Store and All Hallows Eve Boutique (if you dare) for HHN merch and event easter eggs from years past to braving some of the creepiest coasters and their queues (looking at you, Mummy and Skull Island: Reign of Kong!), there's no shortage of adrenaline-pumping experiences at Universal. You can also get some laughs at Universal Orlando’s Horror Make-Up Show. Even better, themed treats and eats can still be found all around the park! 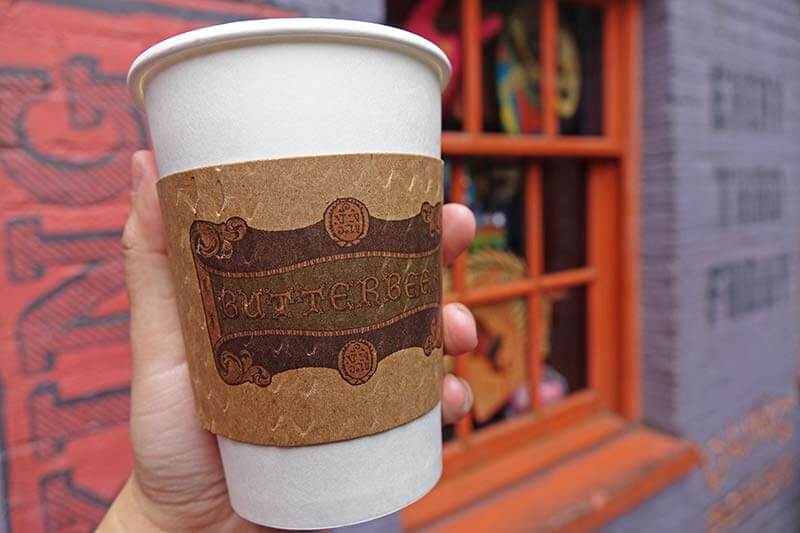 Two words: HOT BUTTERBEER. As of May 2021, Universal Orlando made this once-seasonal drink a year-round treat. However, there's truly no better time to enjoy this toasty beverage than when the temperatures start dropping. You can find this Hogwarts favorite at select food and beverage locations in both Diagon Alley and Hogsmeade. 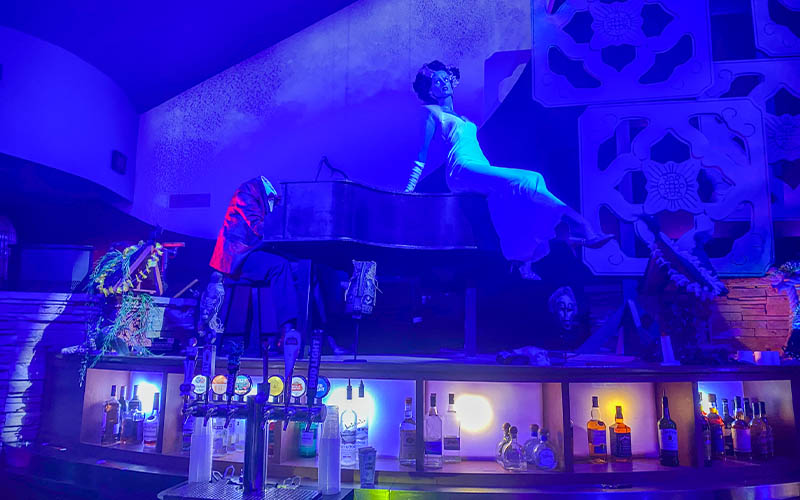 While Horror Nights favorites such as Pizza Fries and Twisted Taters are only available after hours during the event itself, you can still find lots of festive food and drinks all around Universal Orlando Resort throughout the fall and into the holiday season. Stop by the Dead Coconut Club for some creepy cocktails and menacing live music. This rethemed CityWalk lounge has been taken over by Universal's classic monsters and they're dead set on making sure you have a howling good time! 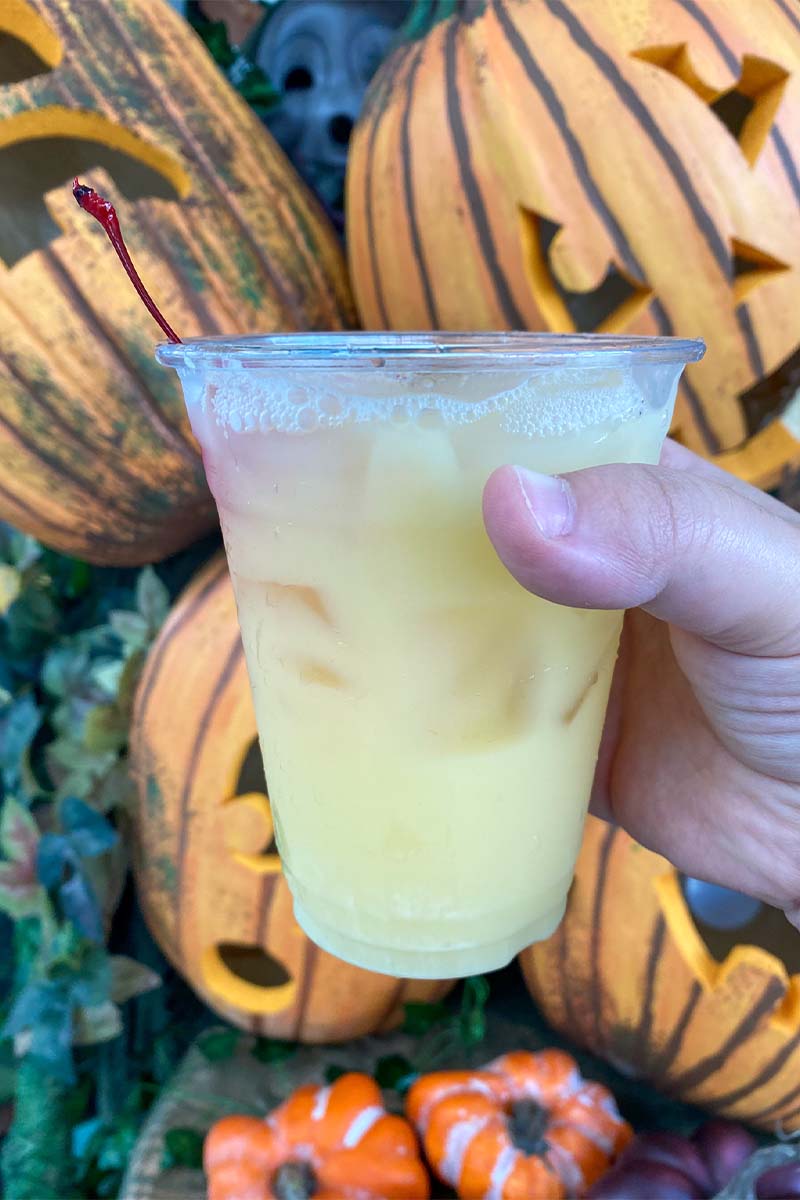 Lastly, the Tribute Store, Today Café and San Francisco Pastry Co. all sell some devilishly delicious desserts throughout the park day, including pudding cakes, chocolate shots and cookie dough balls. We're absolutely in love with the Lil' Boo Pumpkin Bowl Cake at the Tribute Store and quickly devoured the Coconut Yuzu Eyeball at the Today Café! 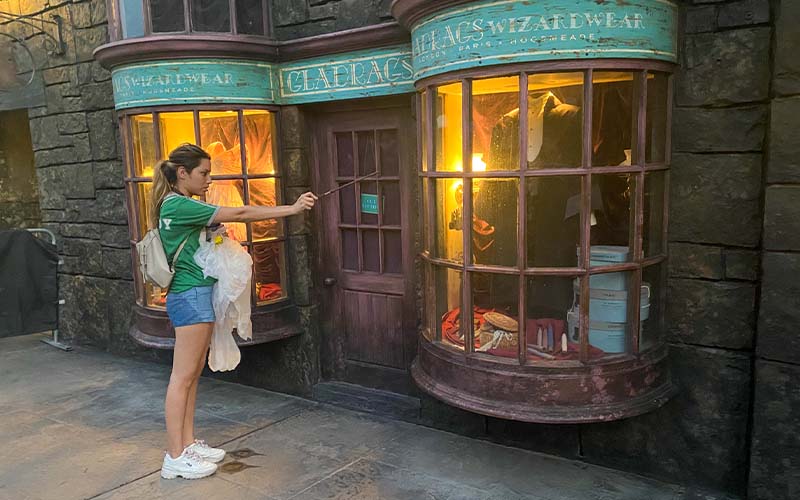 Harry Potter heads back to Hogwarts on Sept. 1, just like many other tadpoles in the muggle world who have to hop back to school by the time Labor Day weekend is over. Because school is newly in session, generally there are fewer frog families planning trips to Universal Orlando in September. Not to say there aren’t any crowds, but they are usually lower this month. For that reason, September is generally one of the best times to visit Universal Orlando! Crowds should even be fairly level through the rest of October and November, with the exception of Thanksgiving week.

Be on the lookout for amazing rates at the Universal Orlando hotels. Help your wallet out even more by booking through your favorite frogs! Whether you’re sticking to a budget or wanting to splurge, Universal Orlando has a variety of options, ranging from value to premier hotels.

Take advantage of the special perks you get when you stay on-site, such as Early Park Admission. If your frog squad is staying at a premier hotel, the entire party will be able to skip the lines with free Universal Express Unlimited passes at Universal Studios Florida and Universal’s Islands of Adventure. Already thinking about making a reservation? Take the leap, and book your hotel stay for the fall!

What's more, Universal Orlando Resort is offering some toadally great ticket deals this fall. Be sure to check out all of the deals available now before they hop away! 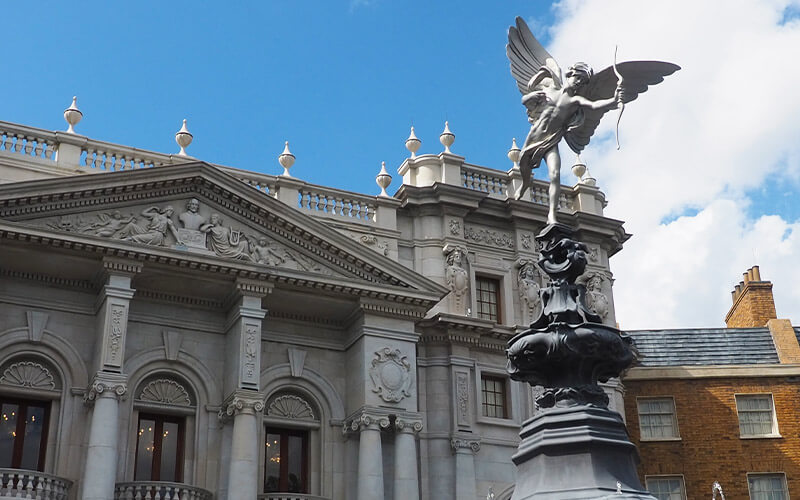 When fall hits in Florida, there isn’t much of a significant change in temperature during the day compared to the summer months. It remains warm and toasty, so you can still wear a T-shirt and shorts and hop on those water rides! But once the sun sets, it cools down and you may actually need a light jacket or sweater. September can still have moments with inclement weather (be prepared with a poncho or an umbrella!), but the overall rainfall begins to decline this month, which makes it less humid too. It isn’t usually until November when the first cold front of the season passes through. Generally, you’ll get enjoyable weather if you visit Universal Orlando in fall! 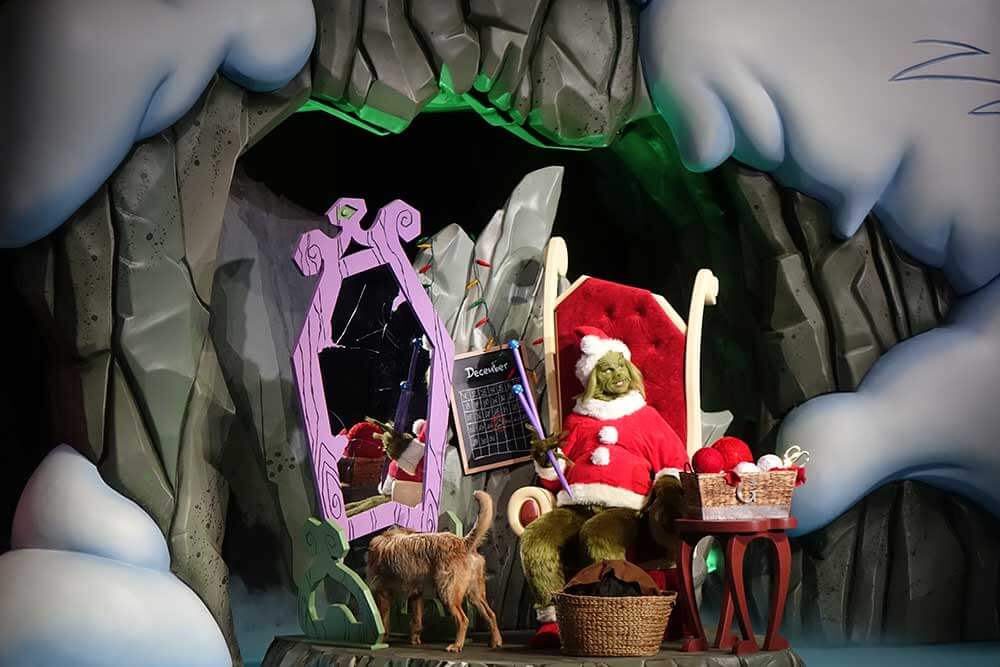 Halloween transitions into Christmas faster than you can say, “Jack-o’-lanterns and jingle bells.” After Halloween, colorful garlands quickly replace the somber decorations from spooky season.

Christmas in the Wizarding World of Harry Potter toadally gets you in the holiday spirit, as does Grinchmas in Seuss Landing! We were so frogcited for The Magic of Christmas at Hogwarts Castle and The Grinchmas Who-liday Spectacular to return to the parks last year. However, it's truly not the holidays without Universal's Holiday Parade featuring Macy's, and we were hoppy to see the larger-than-life balloons floating down the streets of Universal Studios Florida once again last year. All these festive offerings are returning once again in 2022, along with Universal's Holiday Tour and The Grinch & Friends Character Breakfast!

The holiday cheer even continues over at the on-site hotels. With Christmas Tree and Hanukkah Menorah Lighting Ceremonies, Holiday Meal Specials, Strolling Carolers and so much more, there's no need to sacrifice partaking in any holiday traditions just because you're not at home. 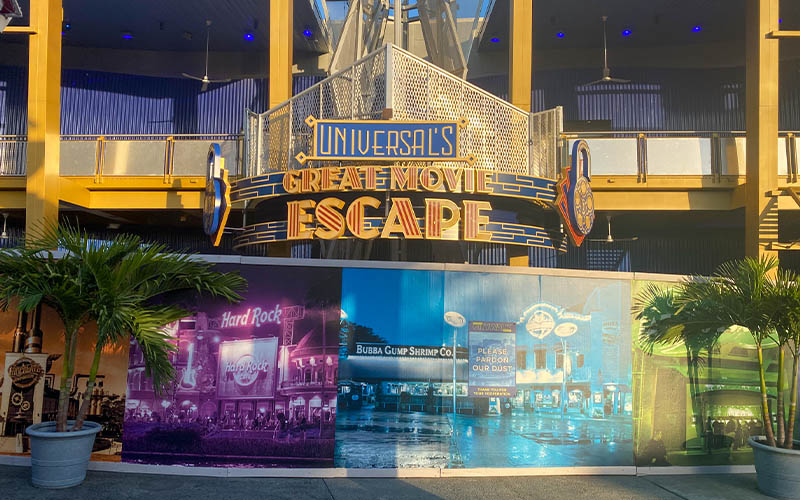 Get ready to experience epic new adventures coming this fall to Universal CityWalk. Test your skills at Universal's Great Movie Escape, two immersive, nail-biting escape rooms inspired by "Back to the Future" and "Jurassic World." We can't wait to travel back in time with Doc Brown and Marty McFly and evade ferocious dinosaurs with Owen Grady and Claire Dearing. Put your thinking caps on, folks! The clock is ticking.

What do you like most about visiting Universal Orlando in the fall? If you're planning a fall trip this year, let us know in the comments and share this post with the rest of your frog squad!

SAVE $61 vs Adult gate price