Walt Disney World has a big birthday coming up in 2021. It’s the big 5-0! Believe it or not, Magic Kingdom Park opened on Oct. 1, 1971. The "World's Most Magical Celebration" will kick off across all four Walt Disney World theme parks Oct. 1, 2021, and will run for 18 months. Disney has even coined the word "EARidescence" to describe what the celebration will be like! Like any big party, you’ll need time to plan. Disney Park Pass reservations are already filling up (in fact, Magic Kingdom is booked already for annual passholders on Oct. 1, 2021), so you may want to book your hotel and get a park reservation through the Disney World reservation system ASAP. EPCOT also shares an anniversary with Magic Kingdom (it will turn 39 years old this year!), and it will be celebrating in a big way with the grand opening of Remy's Ratatouille Adventure on Oct. 1, 2021. The "EARidescent" touches, not to mention the excitement, will extend all across Walt Disney World Resort! 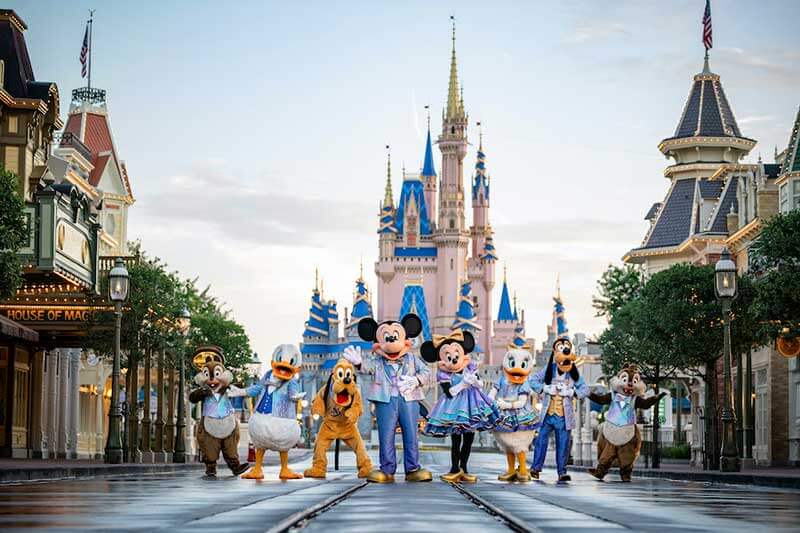 What better way to celebrate a birthday than with fireworks? We've finally learned that Harmonious will premiere Oct. 1, 2021, at EPCOT. But that's not all! A new nighttime spectacular, Disney Enchantment, will kick off the 50th Anniversary Celebration with its debut at Magic Kingdom, and new daytime entertainment, Disney KiteTails, will premiere at Disney's Animal Kingdom. We'll get into more of the exciting details later, plus everything else you can expect during the Walt Disney World 50th Anniversary Celebration (and how you can prepare!).

What to Expect at Disney World’s 50th Anniversary Celebration 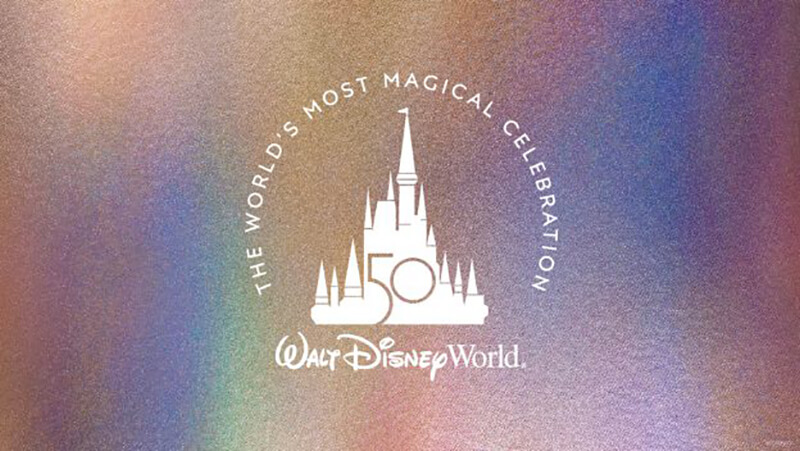 Most large Disney anniversary celebrations include magical entertainment, special park décor, new rides, fun souvenirs and delicious themed treats. We do not have all the specifics yet, but Disney keeps releasing more details about what to expect, such as Mickey and Minnie's new looks, more final touches to Cinderella Castle's royal makeover, special nighttime lighting at each of the four theme park's icons and new entertainment! Keep hopping back as the magical date gets closer for more information.

Disney World is 50 and fabulous. Nothing screams "party" like Walt Disney World entertainment! Due to the pandemic, parades and fireworks were temporarily suspended, but we're so hoppin' excited that not only are normal fireworks back at Magic Kingdom and EPCOT, as of July 1, 2021, but also there will be new daytime entertainment and nighttime spectaculars to ring in the special birthday at the start of October later this year. 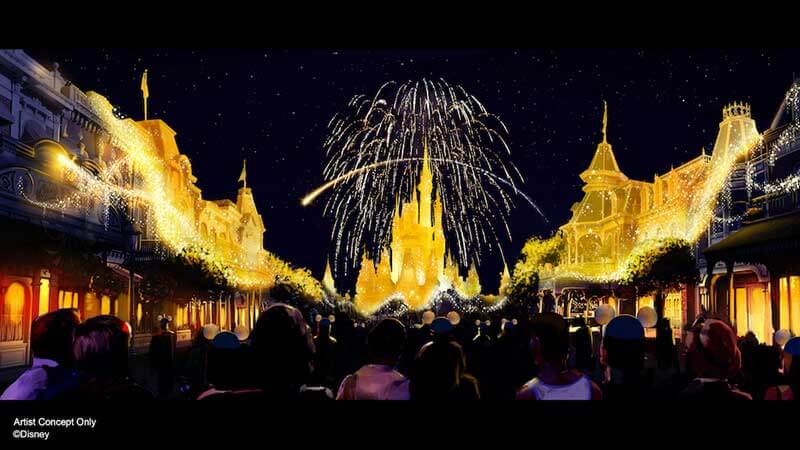 At Magic Kingdom, a new nighttime spectacular will kick off the birthday celebrations. Disney Enchantment promises a journey filled with adventure, wonder and empowerment that will inspire you to believe in magic. It will feature music, enhanced lighting, fireworks and, for the first time ever, projection effects that extend from Cinderella Castle all the way down Main Street, U.S.A. Mickey, Minnie and their friends will also celebrate with a new "Mickey's Celebration Cavalcade" throughout the day.

With the new nighttime spectacular set to take over Oct. 1, catch Happily Ever After before it retires Sept. 29. 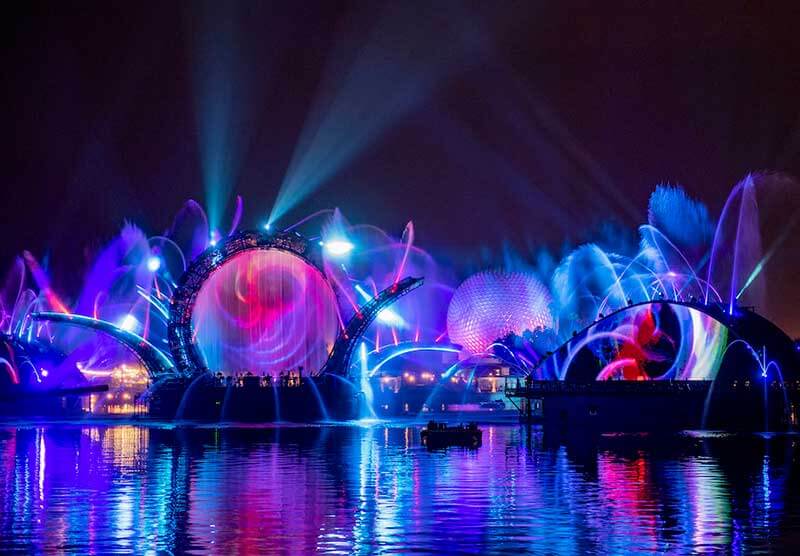 Harmonious — the largest nighttime spectacular ever created for a Disney park — is set to debut Oct. 1 at EPCOT. Harmonious celebrates how the music of Disney inspires people around the globe. Expect to be carried away harmoniously on a stream of familiar Disney tunes reinterpreted by a diverse group of artists. Harmonious features huge floating set pieces, custom-built LED panels, choreographed moving fountains, lights, pyrotechnics, lasers and more. You'll be able to catch EPCOT Forever in the World Showcase Lagoon before it retires Sept. 28.

We'll also be getting new daytime entertainment at Animal Kingdom! Disney KiteTails will come alive several times daily at the Discovery River Amphitheater, starting Oct. 1. Performers will fly windcatchers and kites of all shapes and sizes, while larger three-dimensional kites, depicting Disney animal friends (including Simba, Zazu, Baloo and King Louie), will soar through the sky above the water to the beat of Disney songs.

At night during the "World's Most Magical Celebration," Cinderella Castle, along with the icons from the other three parks, will transform into Beacons of Magic. Pixie dust will shimmer on the castle, magical fireflies will inhabit the Tree of Life at Disney's Animal Kingdom, and new touches will come to life on the Hollywood Tower Hotel at Disney's Hollywood Studios. Over at EPCOT, new lights will shine across the reflective panels of Spaceship Earth, resembling stars in the night sky — this will be a permanent feature that stays beyond the "World's Most Magical Celebration."

You can also expect some new restaurants and an out-of-this-world hotel opening just in time for "The World's Most Magical Celebration!"

A new perk for Walt Disney World Resort hotel guests will debut for the celebration, as well. Early Theme Park Entry will allow hotel guests to enter any theme park 30 minutes early, every day. Woohoo! Deluxe and Villa hotel guests will also have access to special extended evening hours in the parks. No matter which Disney hotel you're staying at, you can also look forward to some Disney pals dropping by to say hello in their party attire, such as Goofy and Pluto!

Cinderella Castle already got fresh new look in paint and gold in 2020 in preparation for the Disney World 50th anniversary celebration, and jewels and golden bunting have been put into place. The castle's transformation was recently completed with a 50th-anniversary crest.

You can expect special decorations around the resort to celebrate the occasion. The Walt Disney World archway sign and Magic Kingdom toll booth plazas are also undergoing a royal makeover to match the royal blue and rose gold paint of the castle. Other attractions around the resort are receiving touch-ups to look their best for the big day too. 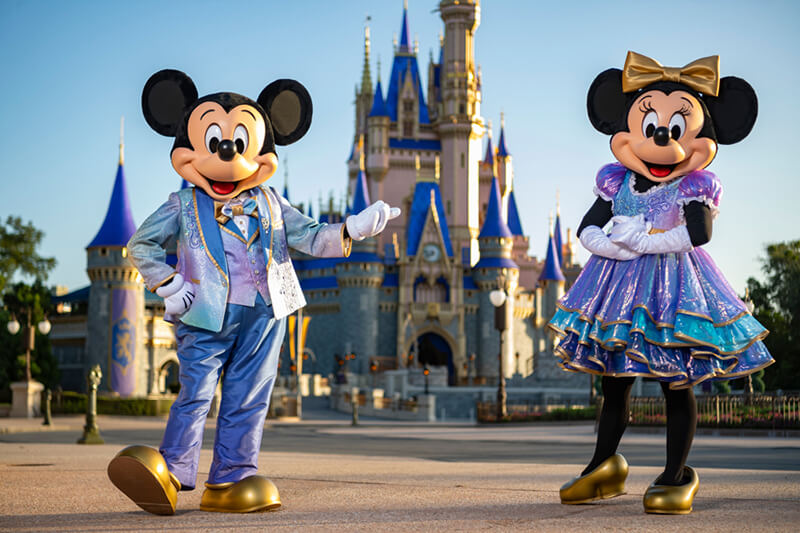 Mickey and Minnie will also don special birthday outfits! Their sparkling new look will be custom-made out of EARidescent fabric with gold highlights. SUPER CUTE! Their pals Donald Duck, Daisy, Goofy, Pluto and Chip 'n' Dale will also get their shimmer on. 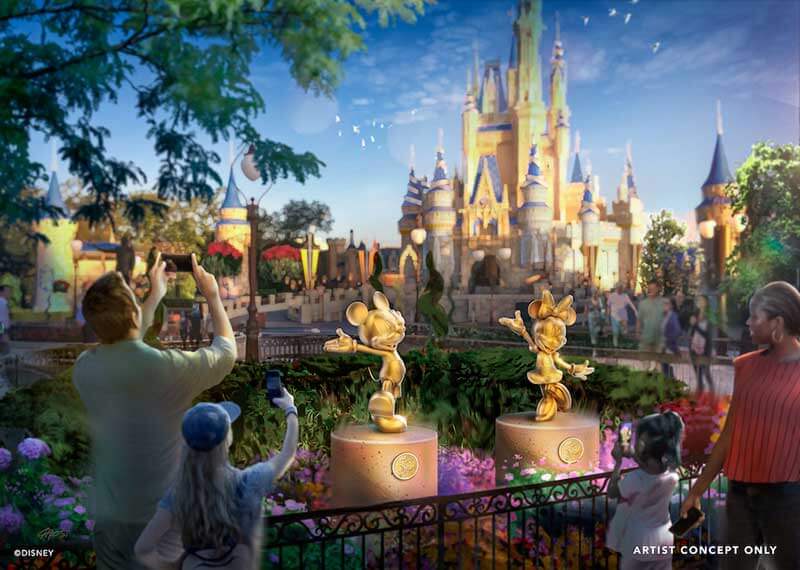 Mickey and friends will also be featured in special golden sculptures, among 50 total characters, that will be displayed across all four theme parks. More and more characters are announced as we get closer to October, so we can't wait to see which of our favorite characters will be next. The celebration even begins as soon as the airplane lands, as Disney World has announced special 50th anniversary decor for the Orlando International Airport. Special art, EARidescent light projections and photo opportunities will dazzle passengers before even leaving the airport. 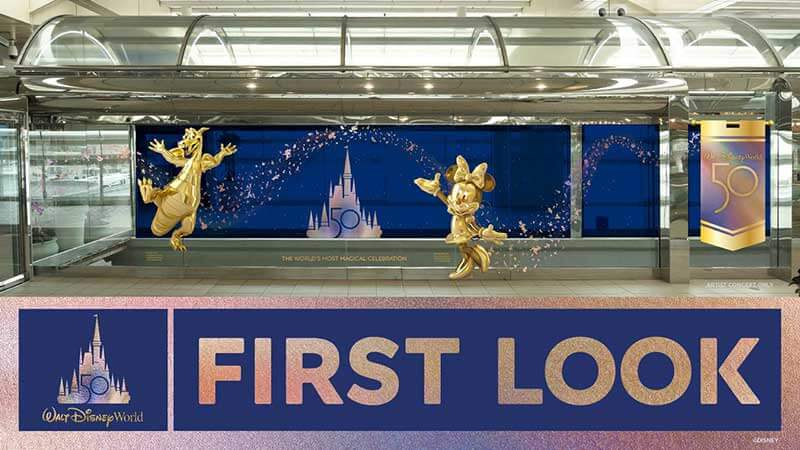 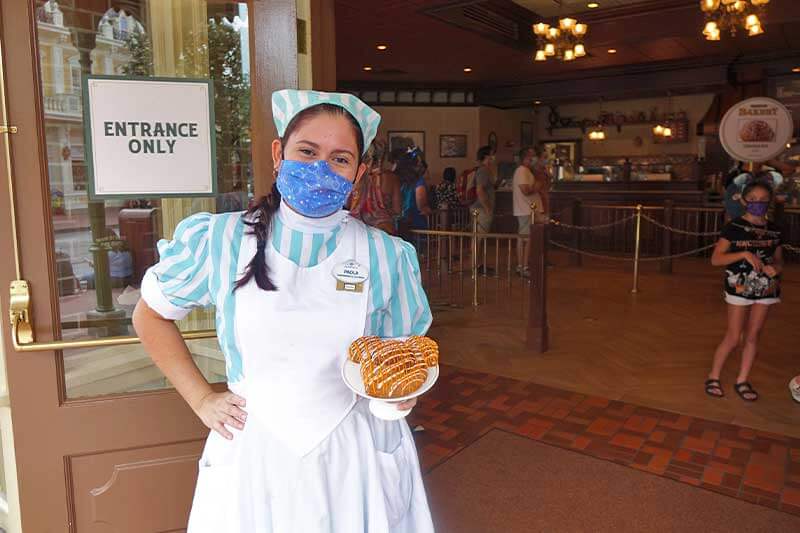 No party is complete unless guests eat treats and depart with a goodie bag. In this case, the bag will likely be a bag of purchased “souvenEARS” from the event. You can expect event merchandise to be available at gift shops around the resort. Clothing, hats, ears, pins, plushes, frames, sippers, popcorn buckets and more are popular anniversary celebration merchandise. Expect all that and so much more.

We look forward to seeing and tasting the themed 50th treats in the parks. We Disney foodies must be patient as Disney World releases these delicious details much closer to the actual event. But we fully anticipate that there will be cupcakes. What's a party without cake?

How to Plan for Disney World's 50th Anniversary Celebration

Hop over to our post on Planning a Walt Disney World Trip in 2021 for the most updated details about park reservations, park operations updates and more. At this point, the Disney Park Pass reservations system is set to be in place until early 2023. That means you will need to make your hotel and your park reservations in addition to general park admission. Having hotel reservations without park reservations will leave you out of the park. Park hopping returned  Jan. 1, 2021, so take that into consideration if you're planning a 50th-anniversary trip! You only need to make a Park Pass reservation for the first park you plan on visiting; since the second park is subject to capacity limitations, we'd suggest making your Disney Park Pass for the park you'd most like to visit if you'll be hopping.

Park Pass reservations for annual passholders are already full for Magic Kingdom on Oct. 1 and can fill up quickly for theme park and resort guests. Since this is not a one-day party, you’ll have plenty of time to join the celebration if October is not your best time to travel. Large celebrations do tend to attract crowds. If you have your heart set on visiting when the event kicks off or at peak times, you should start planning now and lock in your park reservations! For the best availability, book early.

More details are yet to be unwrapped. The anticipation feels kind of like when you are looking at your pile of wrapped birthday presents and wondering what’s inside. We can’t wait until more news unfolds! So keep hopping back as we update this post with more and more details as they are announced. What we do know is that large anniversary celebrations always bring a lot of additional Disney magic to the parks, so they make an especially great time to visit.

Are you planning to visit during the Disney World 50th Anniversary Celebration? You can save money on discount Walt Disney World Resort theme park tickets and hotels when you book with your favorite froggy friends.

Related: What's Coming to Walt Disney World and Universal Orlando in 2021 and Beyond

SAVE $43 vs Adult gate price