5 Magical Hotels and Villas Just a Hop, Skip and a Jump from Magic Kingdom 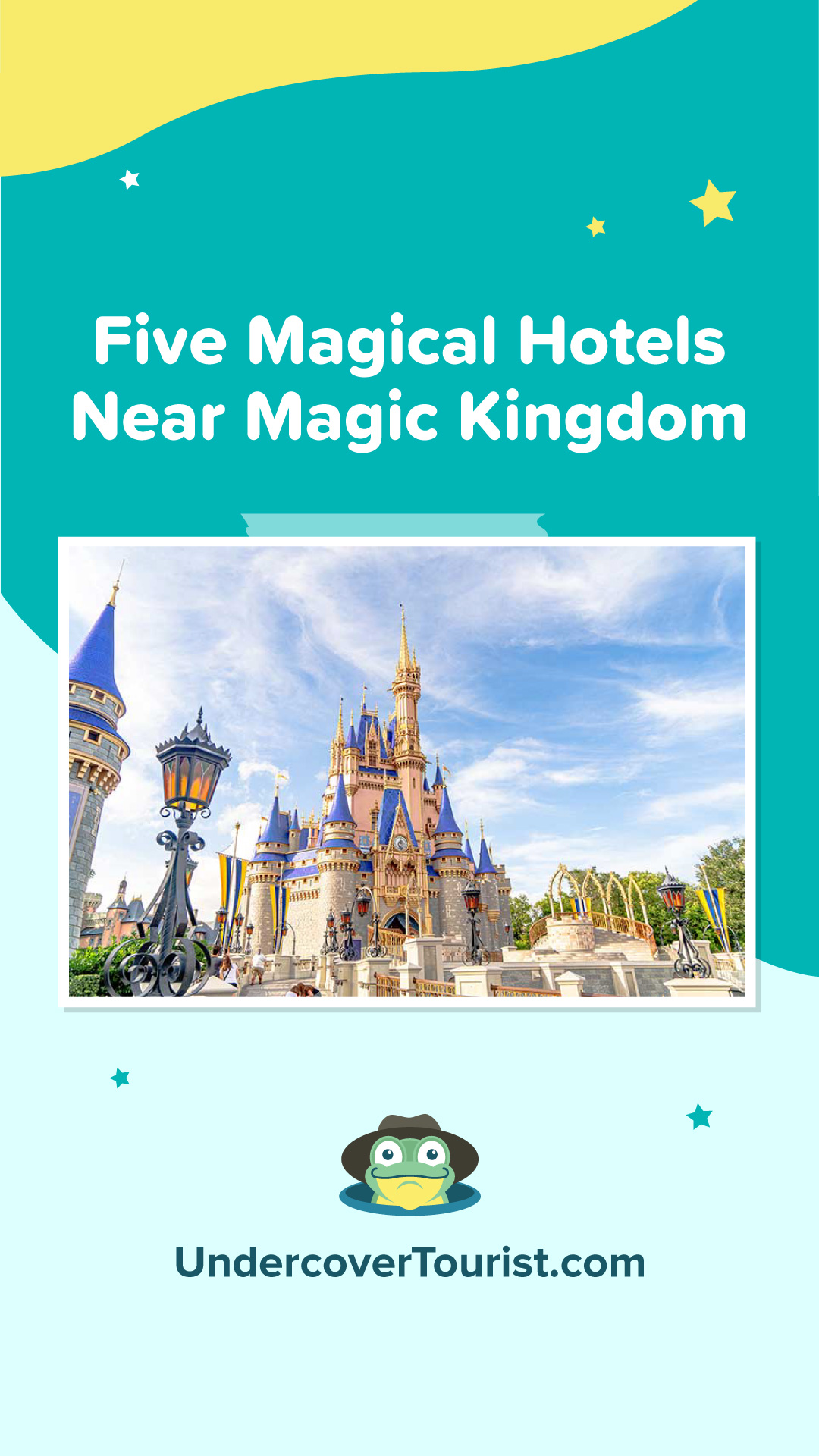 All aboard the monorail (or ferry boat)! Next stop … Magic Kingdom! This picturesque park is home to storybook Cinderella Castle, quaint Main Street, U.S.A. and classic rides such as "it's a small world," Big Thunder Mountain and Dumbo. Some of the best and most magical hotels of Walt Disney World Resort are located near Magic Kingdom. After all, it is the most-visited theme park in the world! While the closest hotels to Magic Kingdom are, perhaps no surprise, among the more expensive, they also offer some of the best theming and a host of other benefits that families will love, including proximity to the Most Magical Place on Earth!

So if you're looking for a conveniently located hotel for a day in the park (and perhaps a short break back at the hotel in the afternoon for a nap or swim), or just want a short commute for  Mickey’s Not-So-Scary Halloween Party or Mickey’s Very Merry Christmas Party, then a hotel near Magic Kingdom is the perfect option. (If you're looking for more hotel options near some of our favorite Disney places, check out the best hotels near EPCOT and Disney Springs.) Let's look at some of the most magical hotels just a hop, skip and a jump from Magic Kingdom!

Why Choose a Hotel Near Magic Kingdom?

In a word ... convenience. The hotels near Magic Kingdom are so close you’ll be hopping to and from the park with ease. Two are within walking distance of the park, three are conveniently located along the monorail line, and three offer boat service! 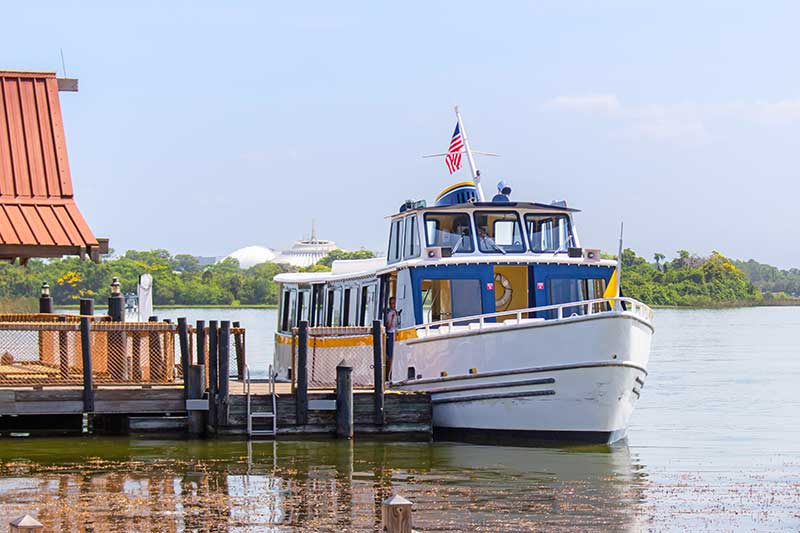 Whether you’re walking, riding the monorail or taking a boat, you’ll find the magic isn’t only in the parks. The theming is quite spectacular — and varied — at each of these hotels, so you're sure to find something that appeals to every taste. And speaking of taste, the deluxe resort hotels closest to Magic Kingdom also offer multiple dining options, including quick-service restaurants, signature restaurants, character dining and other specialty dining experiences.

By the way, all of the official Walt Disney World Resort hotels feature some great benefits. Hotel guests get access to Early Theme Park Entry, offered for 30 minutes before park opening at every park, every day! For deluxe resorts, Extended Evening Hours hoppens on select nights for two hours after park close. Guests also receive early access to individual Lightning Lane selections through the new Disney Genie service. With the new individual Lightning Lanes for purchase, hotel guests are able to begin booking at 7 a.m., while general admission must wait until the park opens. This can be a crucial jump for popular rides such as Guardians of the Galaxy: Cosmic Rewind or Star Wars: Rise of the Resistance. Be sure to link your hotel reservation to your My Disney Experience account to take advantage of these benefits.

Without further ado, let's hop to the most magical hotels near Magic Kingdom and look at what makes them so special!

Most Magical Hotels Near Magic Kingdom 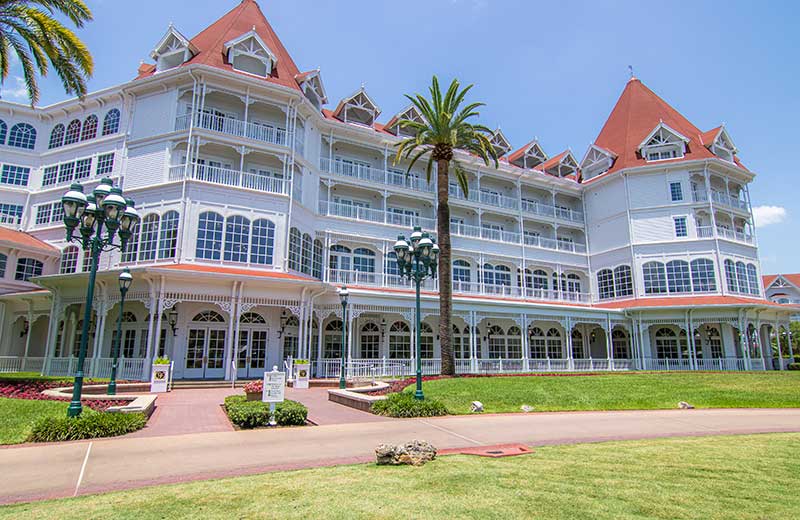 Take the boat to Magic Kingdom — it's often faster than the monorail, especially during less busy times!

At Disney’s Grand Floridian Resort & Spa, the name says it all. Its Victorian-style architecture and lavish décor with upscale amenities make this resort hotel a Frog Family Favorite, especially among the hotels near Magic Kingdom. While many find the "fancy" theming fairly at odds with the term "family-friendly," that is absolutely not the case, although this hotel lends itself to more leisure. Families can escape the hustle and bustle of the parks at the large, serene "quiet" pool and retreat to the hammocks along the hotel's beach in the evening. For those who want to make more of a splash, there is the overflowing beach pool with its 181-foot-long waterslide.The Grand Floridian boasts the finest dining in all the world, with the award-winning Victoria & Albert's. Prior to COVID-19, the tadpoles could enjoy character dining at 1900 Park Fare for all meals, with Cinderella and friends at dinner and characters such as the Mad Hatter, Winnie the Pooh and Mary Poppins for the others. Enjoy the convenience of direct access to Magic Kingdom by monorail or water taxi (a walkway with a pedestrian bridge has also opened!). See our guide for all of the grand details! 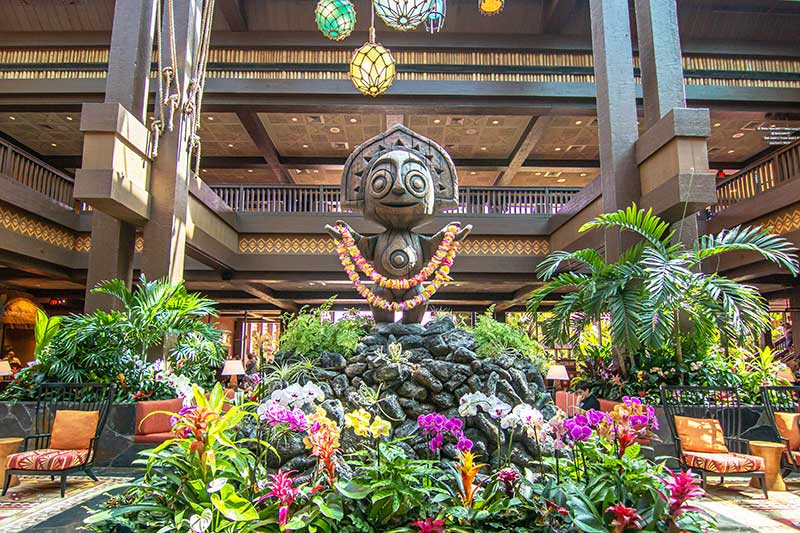 This deluxe Disney World Resort village features tons of delicious dining options, beautiful Polynesian theming and an unforgettable island vibe. Of all the hotels near Magic Kingdom, Disney’s Polynesian Village Resort is the most kid-friendly, offering spacious suites and rooms while being a monorail or boat ride away from Magic Kingdom. It is also one of two original Disney World Resort hotels and enjoys more repeat visits than perhaps most others.

Tadpoles will leap for joy at the Volcano Pool and water play area, and adults will love the interactive environment (and lively cocktails!) at Trader Sam’s Grotto. There are plenty of dining options, such as 'Ohana Restaurant (character breakfast temporarily unavailable) and even a luau to make your island stay complete. Don't froget to grab a Dole Whip! Check out our frogtastic Polynesian guide for more information. 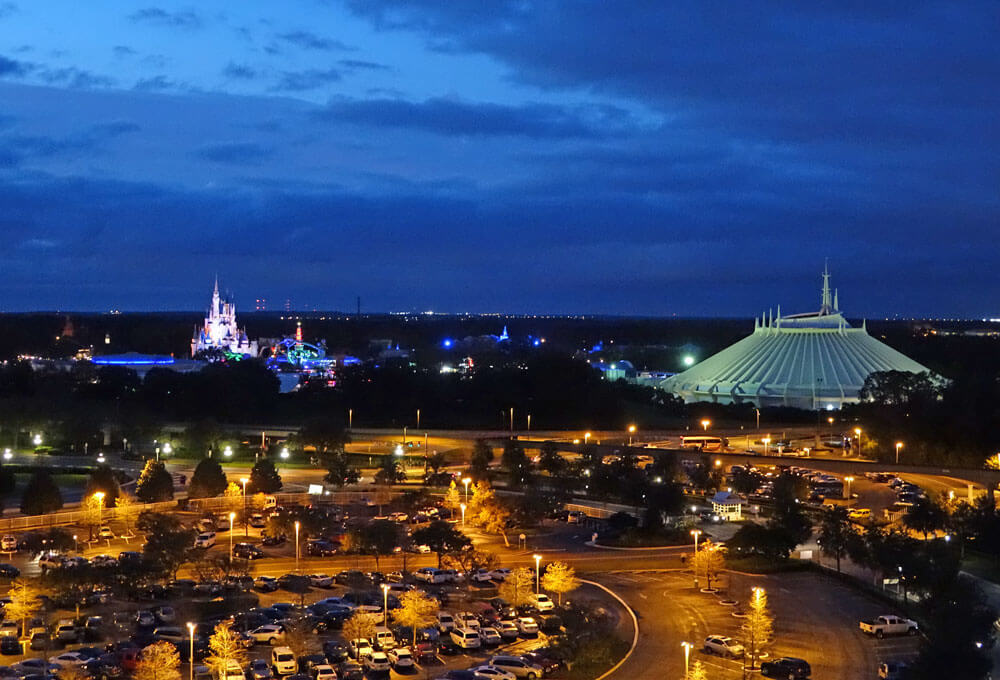 Relish sleek, modern design and convenience? You'll find them all at Disney’s Contemporary Resort. This is the closest hotel to Magic Kingdom. In fact, it's just a short walk away. Of course, you'll want to take the monorail at least once since it runs right through the hotel! You’ll find frogtastic views of Magic Kingdom, Bay Lake and the Seven Seas Lagoon throughout this hotel, and there is fireworks viewing from park view rooms and the top of the hotel at California Grill. The Contemporary boasts some of the largest standard rooms on property, so it’s perfect for big groups and families! It also hosts Mickey and friends for breakfast and dinner at the popular Chef Mickey's. While the pool is one of the smallest at Disney World, it does overlook the Seven Seas Lagoon. Hop over to our complete guide for more details! 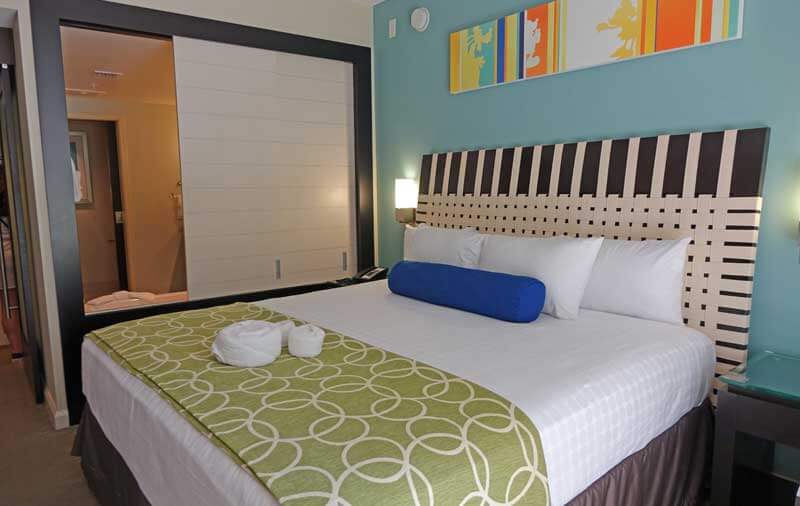 Villa living awaits you with Bay Lake Tower’s sleek design and lakeside location. Bay Lake Tower shares the same property at the Contemporary, but it offers studios and multiple-bedroom suites suitable for larger groups and longer stays. Take a short stroll to Magic Kingdom via the walking path (10 minutes!) or hop on the monorail, which you can access at the Contemporary via the Skyway Bridge! Enjoy spectacular views of fireworks and Magic Kingdom from your park-view room, or from the observation deck or at California Grill next door. Relax poolside at the Bay Cove Pool or in your spacious villa. The clean, modern design and cool palette is sure to please — especially after a long day in the park! 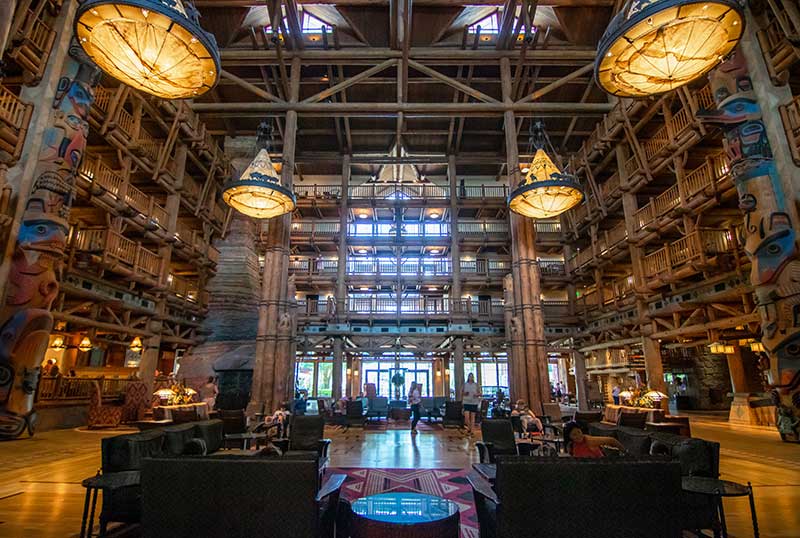 Ready for a family wilderness adventure in an upscale rustic setting? This is the place! Explore the sandy beach, erupting geyser and wooded paths at Disney's Wilderness Lodge. Go on a scavenger hunt for Hidden Mickeys in the towering, national park lodge-like lobby. The tadpoles will love that some standard rooms include bunk beds. While it’s one of the smaller hotel pools near Magic Kingdom, it's one of the best themed! The gurgling hot spring forming the pool starts in the lobby. Follow the meandering creek outside through the boulders until you come to the pool, which is surrounded by greenery and large rock formations! Don't froget to check out Storybook Dining at Artist Point, where you can meet The Queen, Snow White, Dopey and Grumpy in a scene reminiscent of enchanted woods, complemented perfectly by the resort's scenery (plus, the food is todally amazing!). Ready to hop to the parks? Take a boat ride to Magic Kingdom. When you return for the evening, make sure to catch the Electrical Water Pageant, held on the Seven Seas Lagoon nightly. 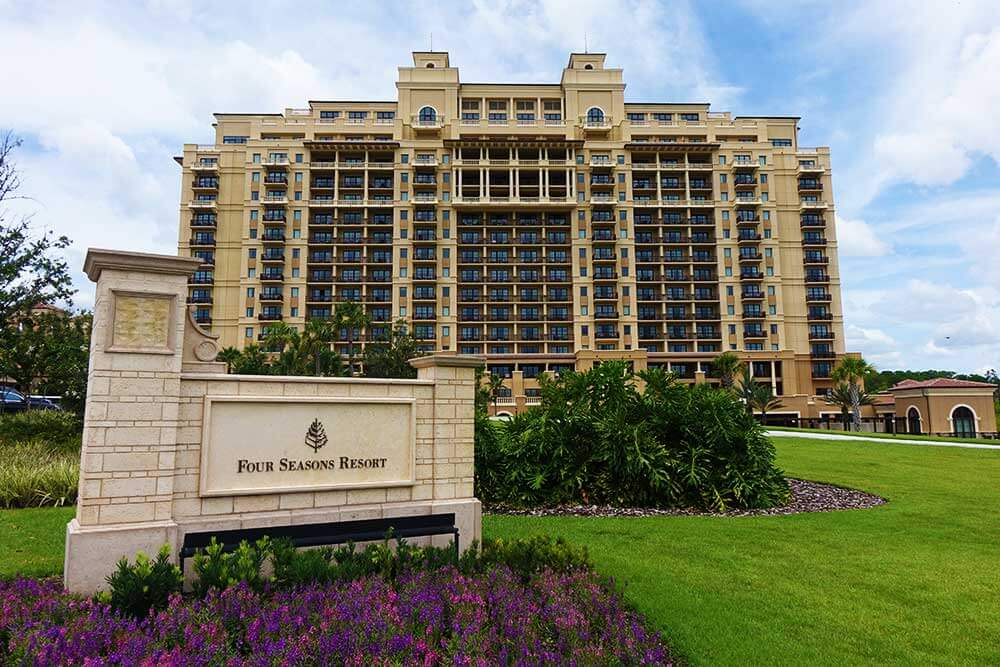 While it's not an official Walt Disney World hotel, it combines some of the benefits of a Walt Disney World hotel with the luxury of the Four Seasons. Guests get access to Early Theme Park Entry for 30 extra minutes at any park, any day. The Four Seasons Resort Orlando even includes a character breakfast with Goofy and his pals and complimentary transportation to the theme parks. The lakeside resort features rooms and suites with stunning firework views at Magic Kingdom. Hop to the five-acre water park or the video game room for a break from the parks. The Four Seasons Resort is a great option for families looking for a resort with a great location and high-end feel.

All of the Walt Disney World Resort hotels offer free transportation to the parks, so you're never that far away. These are the more affordable lodging options near Magic Kingdom. By the way, there is one truly unique and affordable option near Magic Kingdom — the campsites and cabins at Disney's Fort Wilderness. It's adjacent to Disney's Wilderness Lodge and accessible to Magic Kingdom by boat and bus!

Check out these resort hotels near Magic Kingdom:

Have a question about any of the hotels near Magic Kingdom? Drop us a line in the comments below! Can't decide on which Disney World hotel? Use our Disney World Resort hotel comparison tool! Then book your hotel with us at a discount!

Related: Which Disney World Deluxe Resort Hotel Is Right for You?