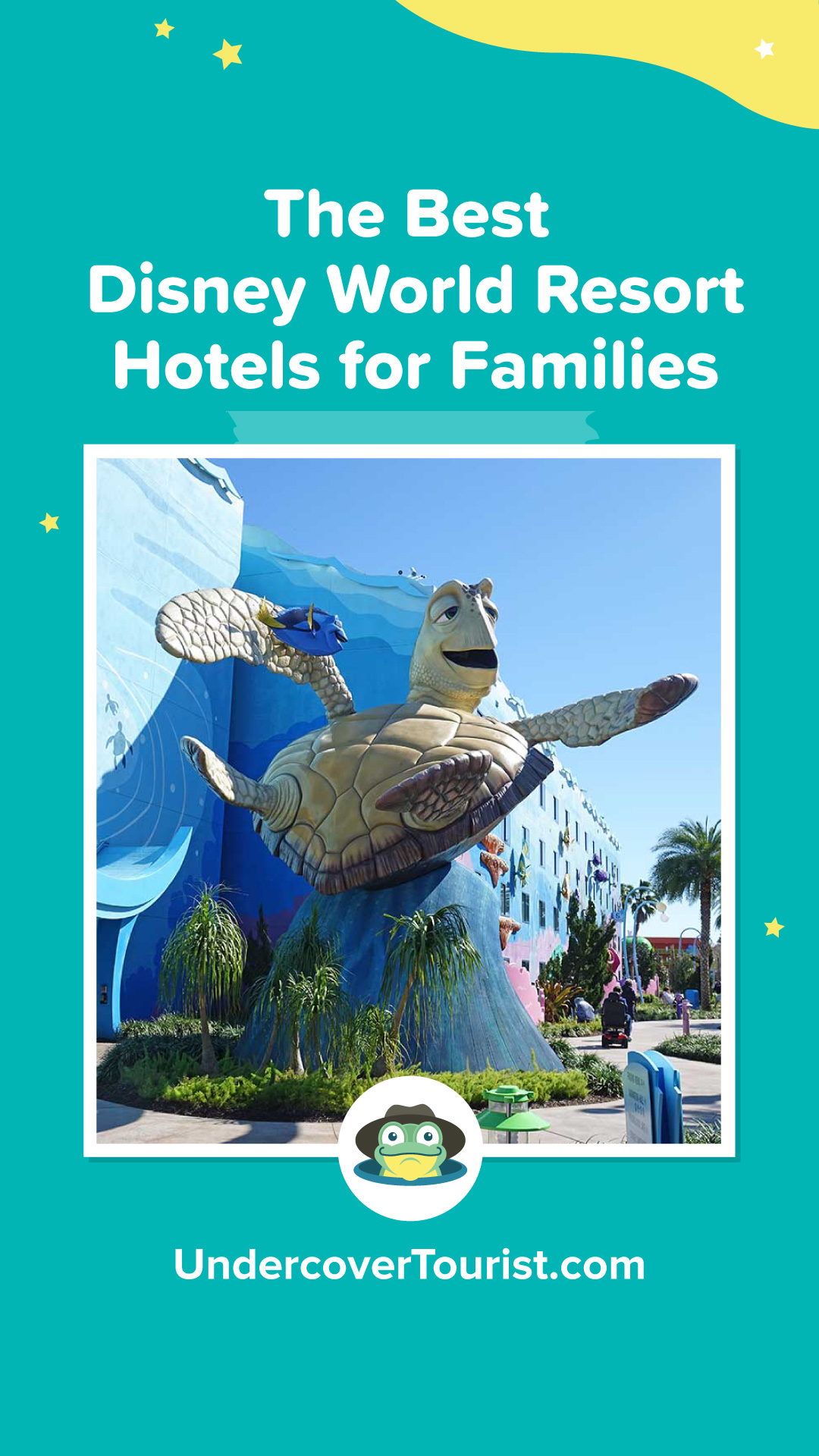 Even now, with all of our trips to Walt Disney World, we frogs sometimes have a hard time deciding which hotel to stay at. Tad only wants to stay at the hotel that he needs more footage of, Lily wants a nice pool to splash around in, Leap is pretty hoppy-go-lucky, and so the tough decision gets left to me. There are so many toadally great choices when it comes to Disney World hotels! Each comes with its own amenities and distinctive Disney flavor. Luckily, we have some go-tos, and we're so hoppy to share them all with you. All of the Walt Disney World Resort hotels are amazing and tadpole-friendly, but we think a few deserve to be called the best Disney World hotels for families.

We considered everything from theming to transportation. Which hotel’s amenities provide the most entertainment for the tadpoles? Which resort has the path of least resistance for getting yourselves (and the stroller!) to the parks? We’ve thought of it all!

Without further ado, here’s our list of the best Disney World hotels for families and what makes them stand out from the rest. (We'd also be remiss if we didn't mention that we're offering discounts on all of Disney World's hotels in addition to Orlando hotels. You can view our full reviews and book!) 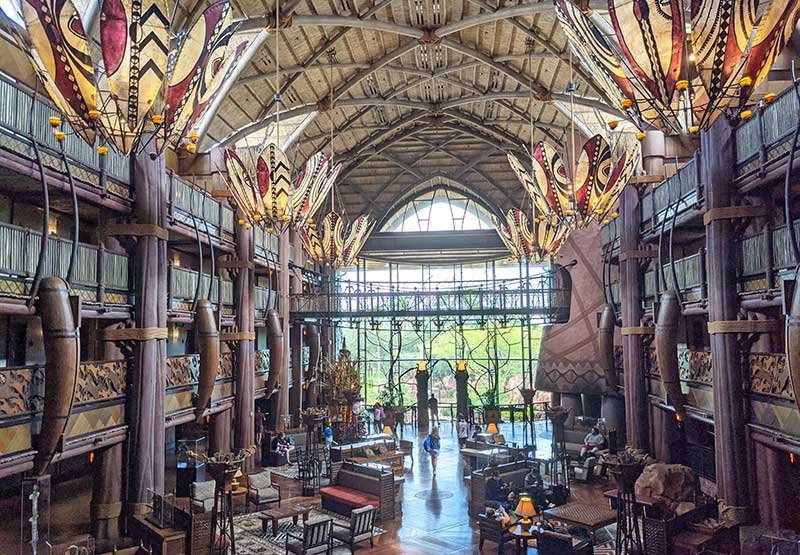 We love stepping in to Disney’s Animal Kingdom Lodge to start off a vacay. Hands down, it has the most spectacular lobby of any Disney Resort hotel. You feel like you’re on an African adventure with amazing animal views from the savanna-facing rooms (and there are plenty of public viewing areas too!). As one of the largest pools on Disney World property, Uzima Springs offers a relaxing tropical oasis amidst the wildlife. In keeping up with the theme in all aspects, Boma - Flavors of Africa is our favorite buffet that includes both American and African dishes. Check out our wild guide for Animal Kingdom Lodge! 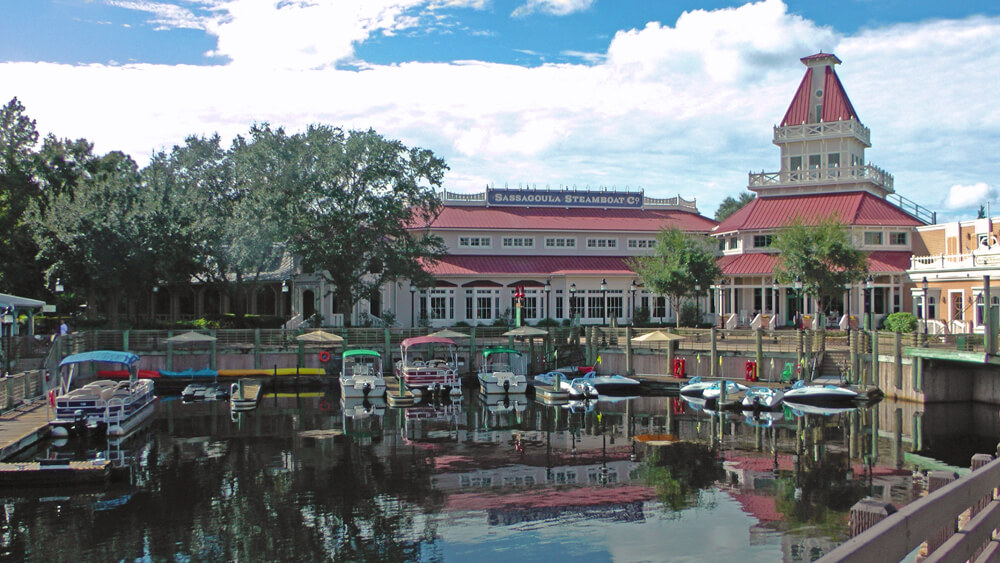 Recreating Southern charm, Disney’s Port Orleans - Riverside has beautiful grounds with manicured magnolias, bayou “swamps” and even a working water mill. Your very own princess will surely love the theming of the Royal Guest rooms, which feature Tiana and her princess pals. Many rooms can sleep up to five adults, which makes this resort a better choice for larger families. Port Orleans - Riverside has dog-friendly accommodations, so you can include your furry friend too! Enjoy a horse-drawn carriage ride along the banks of the Sassagoula River, or hop on a boat to Disney Springs for a hoppin' night out (or maybe just a Ghirardelli sundae!).

Out of all the Disney moderate resorts, Coronado Springs Resort has the most family-friendly amenities, including a spa, fitness center and full room service. It does not disappoint the tadpoles, either! The Dig Site is home to the Lost City of Cibola Pool, a sand volleyball court, an archaeological-themed playground and Disney World’s largest hot tub. Lily and Tad love racing down the pool’s 123-foot-long water slide! Learn more about Coronado Springs in our frog family guide. 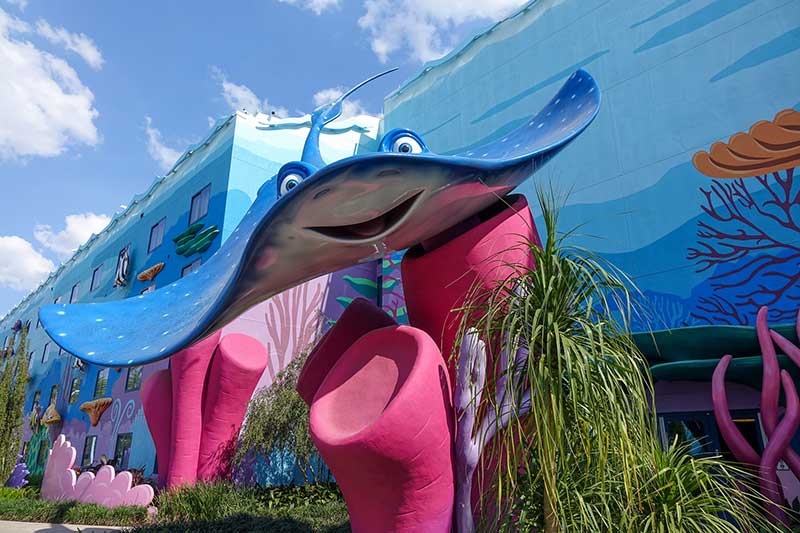 Disney's Art of Animation Resort has THREE fun pools themed after fan-favorite animated movies: the Big Blue Pool, the Cozy Cone Pool and the Flippin’ Fins Pool. Inspired by “Finding Nemo,” the Big Blue Pool is the largest pool at any Disney resort, containing 308,527 gallons of water. For tadpoles, there's also a toadally fun splash pad to enjoy. At the Cozy Cone Pool, it’s clear that the pool area gets inspiration from “Cars” with its cone-shaped cabanas (which are available for free on a first-come, first-served basis). You can also let out your inner mermaid at the Flippin’ Fins Pool and enjoy the “Under the Sea Orchestra” conducted by Sebastian. Plus the resort is pet-friendly so your furry friend can join on the trip! Hop on over to our full guide for more information. 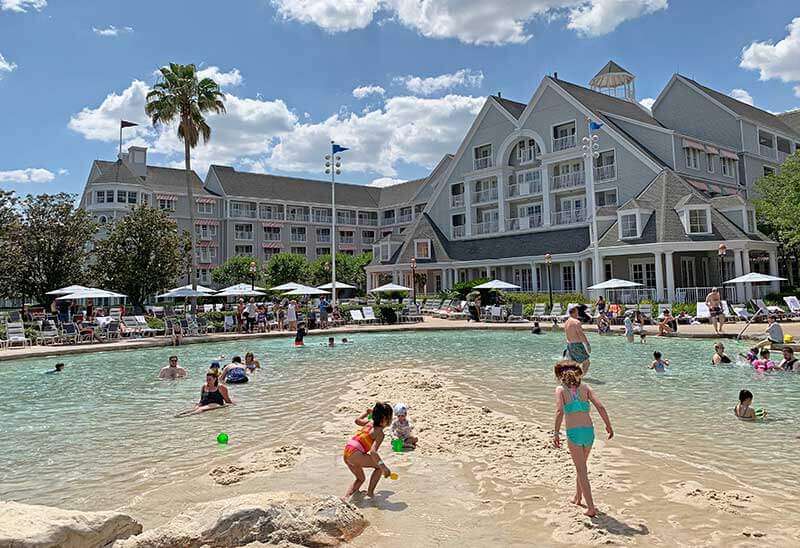 We like to mention Disney’s Beach Club solely for its three-acre mini water park, Stormalong Bay, that it shares with its sister hotel, Disney’s Yacht Club. It's one of the top Disney World resort pools! Some of its best features include a 230-foot-long water slide from a shipwrecked pirate ship, a lazy river and a sand-bottomed, zero-entry pool. You can also swim or play water volleyball in the regular pool section, or relax in one of three hot tubs. Prior to reopening, Disney’s Beach Club also hosted a beach bash breakfast with Minnie Mouse and friends at Cape May Cafe. Both resorts are an easy walk to EPCOT’s International Gateway entrance. 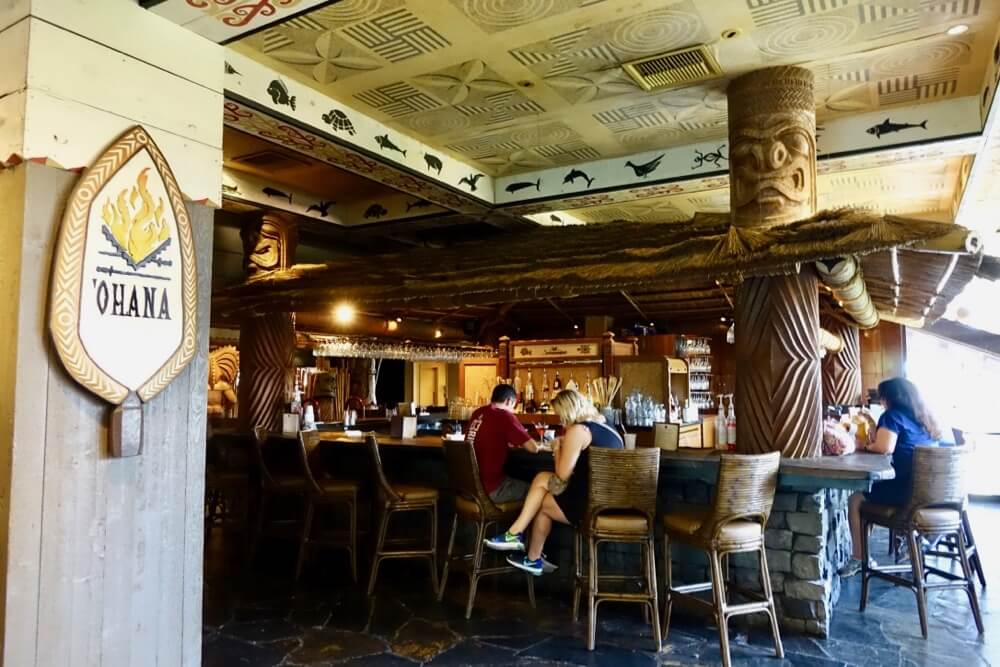 Polynesian Village Resort has spectacular on-site dining options that range from quick-service restaurants to a dinner show. Kona Cafe is a frog favorite that serves traditional American dishes with hints of Asian cuisine. You can also watch sushi chefs prepare rolls at the onstage kitchen. Enjoy family-style breakfast and dinner at 'Ohana with American and Polynesian dishes (character dining with Lilo and Stitch has not yet returned to this location). The Spirit of Aloha Dinner Show permanently closed after the COVID-19 reopening. While enjoying the beautiful theming of the resort, treat yourself to a delicious Dole Whip at Pineapple Lanai. Count us in! Learn more about this classic resort in our hoppin' guide. 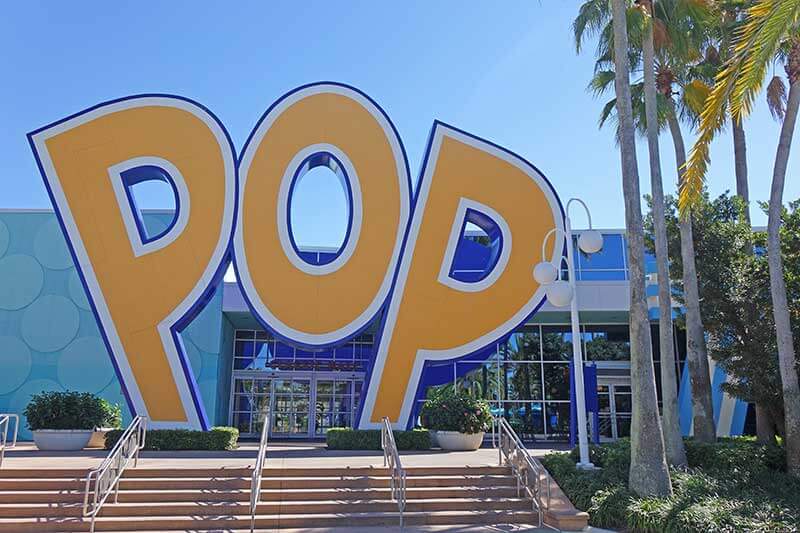 The food court at Pop Century Resort is one of our favorites! It’s set up with several quick-service stations that offer different food options, including burgers, pizzas and create-your-own salads, so everyone in the family is bound to find something they like. It also has a refrigerated “Grab-N-Go” market area if you’re looking for a quick bite so you have more park time. You’ll have to try out some of the unique menu items, such as POP waffles and tie-dye cheesecake. Learn more about Pop Century in our full guide. 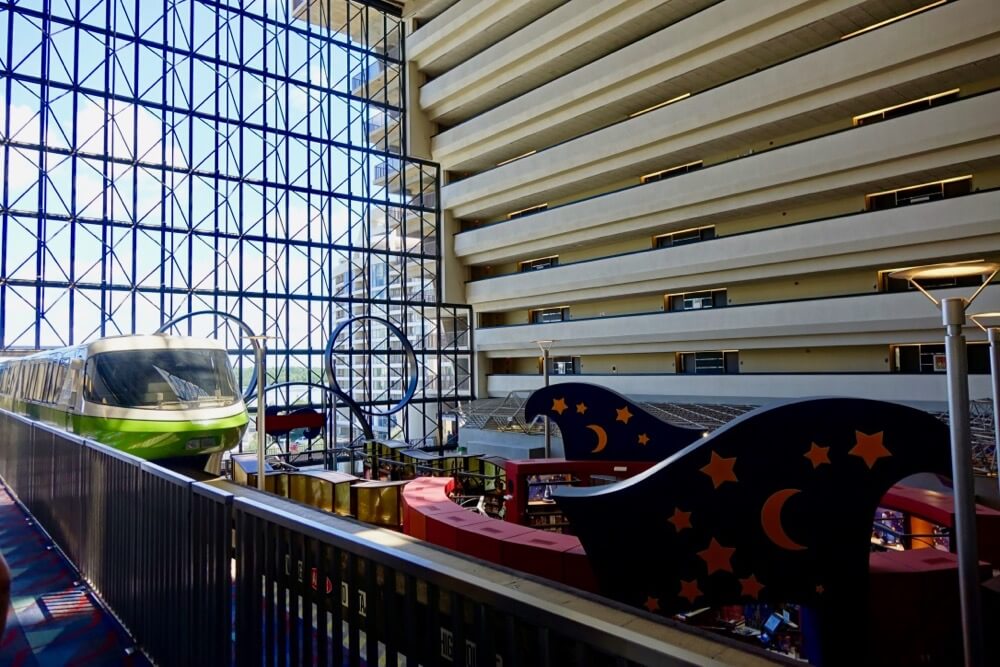 Listen up frogs: This is the closest you can get to the entrance of Magic Kingdom! There is even a walkway to the park if you wish to get more steps in (hint: sometimes it’s even faster than taking the monorail). Otherwise, it’s only one monorail stop away. You can also hop on the monorail to the Transportation and Ticket Center to switch routes and head straight to EPCOT. Unless it’s super busy, you generally won’t have to fold up your stroller, which we consider a huge plus. Head over to our full guide for more information! 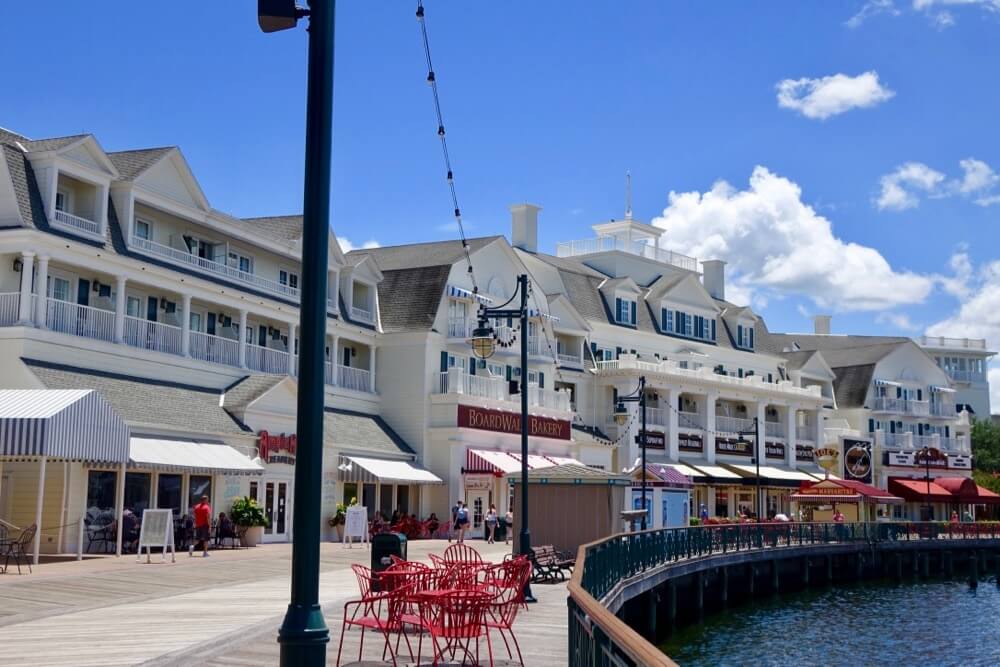 The BoardWalk Villas has one of the best central locations of any Disney resort. You have prime access to the BoardWalk entertainment district, as well as a short Friendship Boat ride away from both EPCOT and Disney's Hollywood Studios. If your froggy legs are up for it, you can also walk to either park. 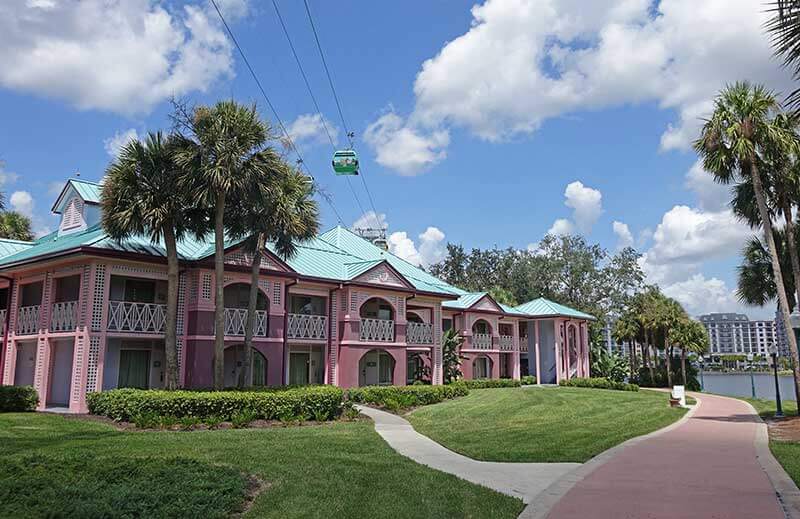 Caribbean Beach Resort is the home of a major Disney Skyliner hub. You can take the new gondola system directly to Hollywood Studios or EPCOT. At the Caribbean Beach main hub, guests can transfer routes depending on which park they want to visit, similar to the Transportation and Ticket Center. There's enough room in a gondola that most strollers won’t need to be folded up! Larger strollers may also use a separate wheelchair queue for extra time to hop on. The resort also has its own internal bus route, so you don’t have to walk far from your room. Aside from easy transportation, we love swimming in the Spanish fortress themed pool, Fuentes Del Morro!

There you have it — the best Disney World hotels — at least according to us frogs! Which is your favorite? Make sure to hop over to our Where to Stay in Orlando page inside the Orlando Planning Timeline for more planning resources!