Where to Meet Characters at Universal Orlando Resort 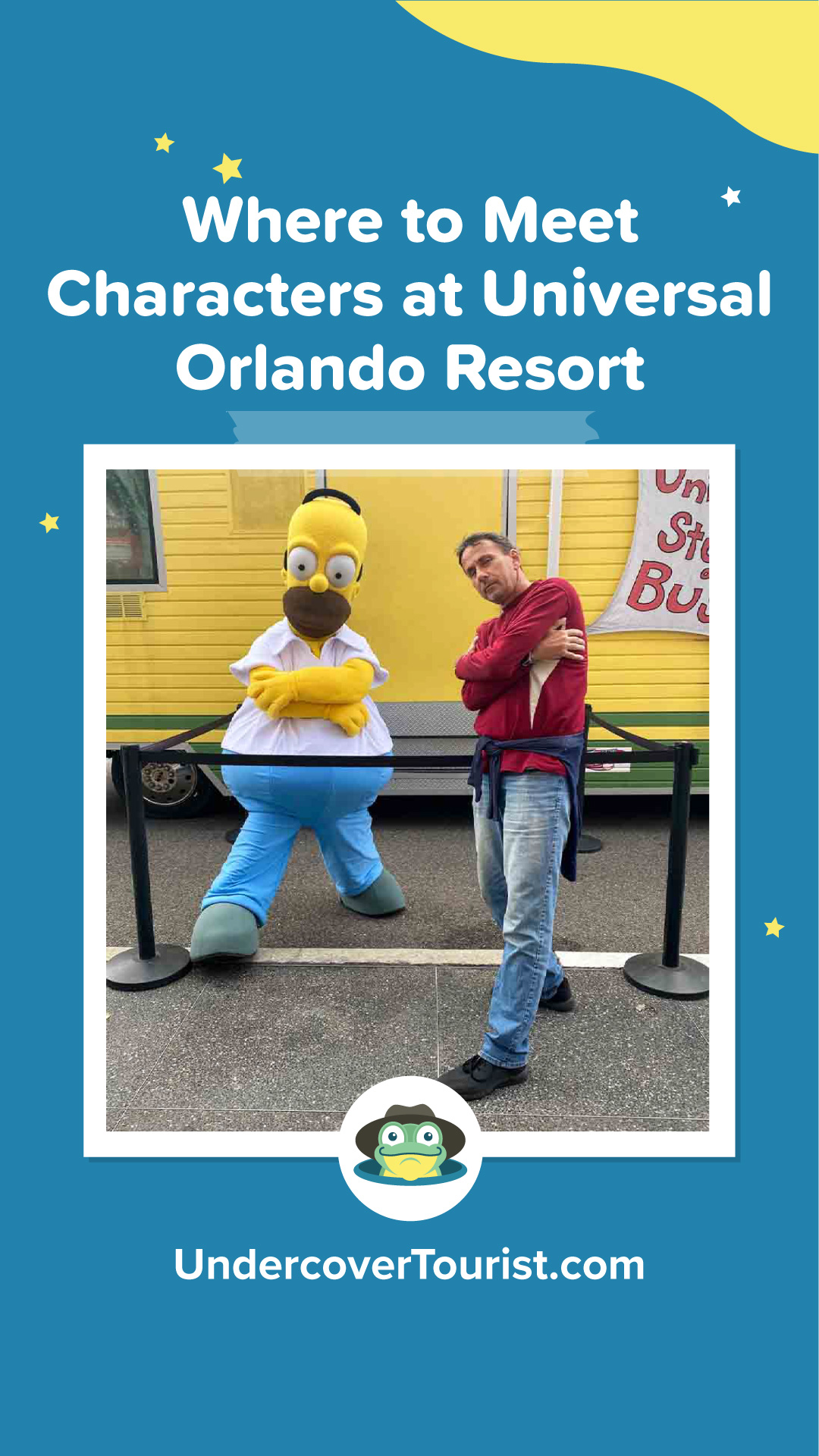 Universal Orlando Resort is a place where you can dive headfirst into the world of beloved movies, TV shows, books and comics. From chatting with cherished cartoons you or your tadpoles grew up watching on Saturday mornings to coming face-to-face with the action heroes that star in Hollywood's biggest blockbusters, there are a plethora of places to meet and take photos with your favorite characters. Character encounters take place throughout the day in both Universal's Islands of Adventure and Universal Studios Florida. The best part? You can just hop right in line! No reservation or My Universal Photo pass is required. Ready to make some epic memories? Perfect! Read on to find out where you can capture those coveted Kodak moments.

Head to the side of the Marvel Alternivese Store and get in line to meet the friendly neighborhood superhero himself. Make sure you've practiced your web-slinging! Not only do you get to snap a photo with Spidey, but you also get your photo turned into the cover of a Marvel Comic. How cool is that?!

Keep an ear out while you're in Marvel Super Hero Island! Every so often over the speakers, you'll hear the arrival of your favorite Marvel heroes or villains being announced. Strike a powerful pose with Captain America, Cyclops, Wolverine, Storm and Rogue or beg for mercy at the hands of Doctor Doom and the Green Goblin. Characters appear in varying areas around the island. 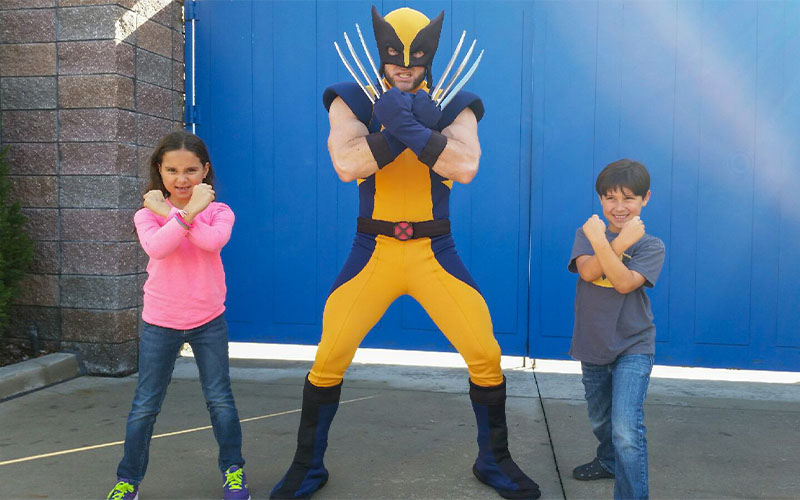 Step into the pages of the Sunday morning funnies and laugh alongside some of the most timeless comic characters around. Dance along with Betty Boop who's usually found near the Betty Boop Store or get into some crazy antics with Popeye the Sailor Man and his number one gal, Olive Oyl. (Watch out! You never know where Bluto might be lurking.) 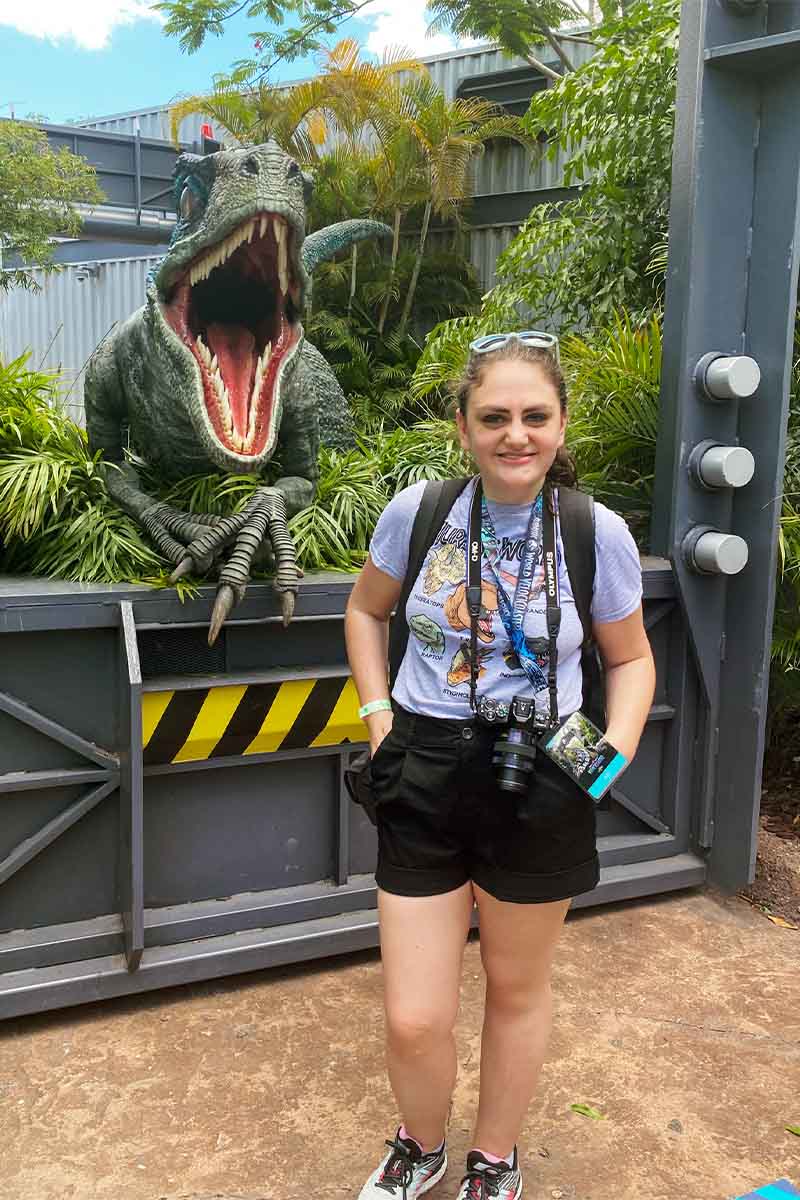 Are you brave enough to come face-to-fangs with a vicious velociraptor? Meet Blue, the famous clever carnivore from Jurassic World at this exciting encounter where a professional raptor trainer will guide you through your interaction. If you're lucky, you might also get to meet one of the newest additions to the pack, baby Sierra or baby Tango!

There are many beloved characters to meet just up ahead on Mulberry Street! Get your camera ready because The Cat in the Hat, Sam I Am, Thing One, Thing Two, the Grinch and the Lorax meet with families several times a day in between Circus McGurkus Cafe Stoo-pendous and All The Books You Can Read.

Other Character Encounters in Islands of Adventure

Meet The TRANSFORMERS in Production Central 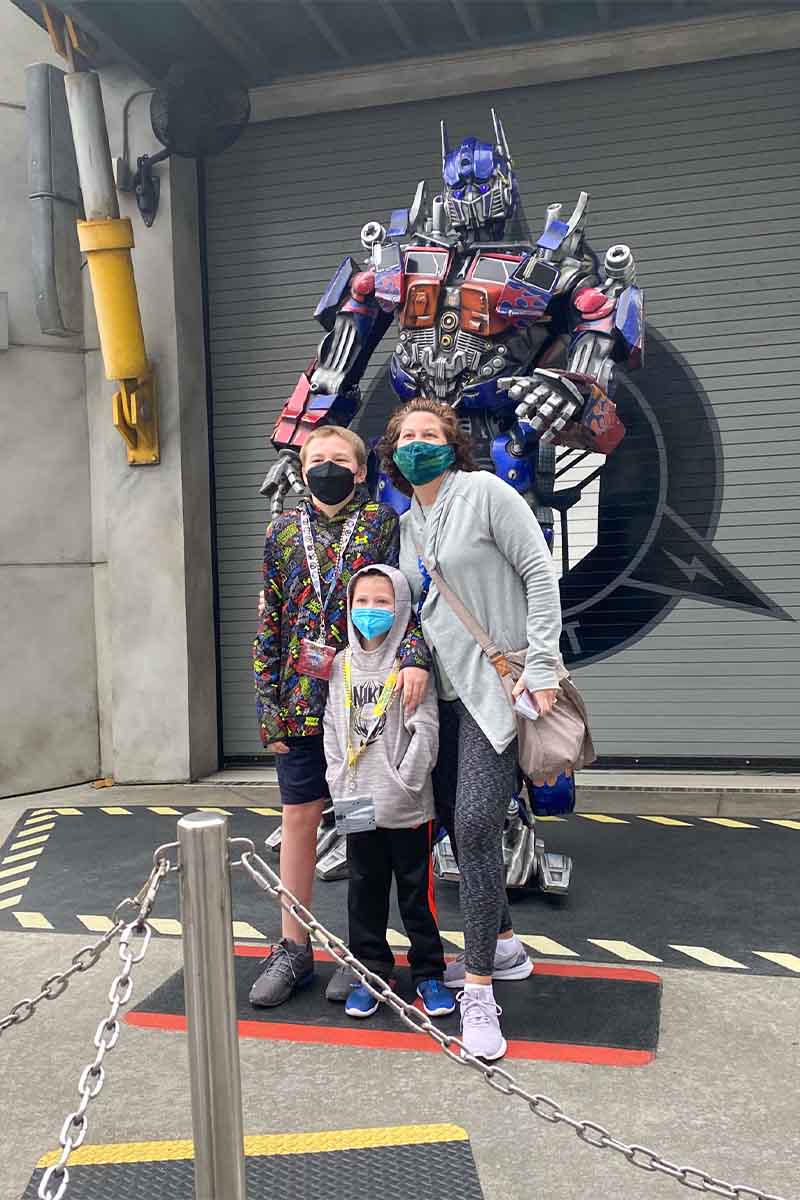 Get ready to meet the fearless Optimus Prime, jam along with the adorable Bumblebee or kneel before the mighty Megatron. The valiant Autobots and the dastardly Decepticon switch off meeting times at the N.E.S.T. garage located directly across from TRANSFORMERS: The Ride-3D. These Cybertronians are, without a doubt, one of the coolest meet-and-greets in the entire park!

Meet the wacky residents of Springfield at various locations around the Home of The Simpsons — right outside the Kwik-E-Mart or at the exit of The Simpsons Ride. Hang out with Homer and Bart, mingle with Marge and Lisa or crank up the crazy with Krusty the Clown and Sideshow Bob!

You don't have to travel all the way under the sea to meet the porous, pink and peeved citizens of Bikini Bottom. You can interact with Spongebob, Patrick and Squidward over in Woody Woodpecker's KidZone both inside and outside of Spongebob Storepants. Let the nautical nonsense commence!

Bust a move and unleash your inner party animal at DreamWorks Destination, a fun, interactive experience in Woody Woodpecker's KidZone. All your favorite characters from "Madagascar," "Trolls," "Puss in Boots" and "Kung Fu Panda" have come to shake their groove thing! The best part? This space is air-conditioned and a great place to rest your webbed feet during a long day.

The royal couple of Far Far Away and their noble steed aren't so far away after all! Shrek, Princess Fiona and their lovable talking donkey have a new home in Woody Woodpecker's KidZone just to the left of Dreamworks Destination. We love to crack jokes with Donkey, one of our favorite characters at Universal Orlando Resort!

Clear the streets and blast the music! Several times a day, you'll catch characters including the Minions, Gru and his daughters, Spongebob, Patrick, Squidward, Dora, Diego and Boots out in between Mel's Drive-In and Universal Orlando's Horror Make-Up Show for a block party like none other. Be sure to have your camera ready! 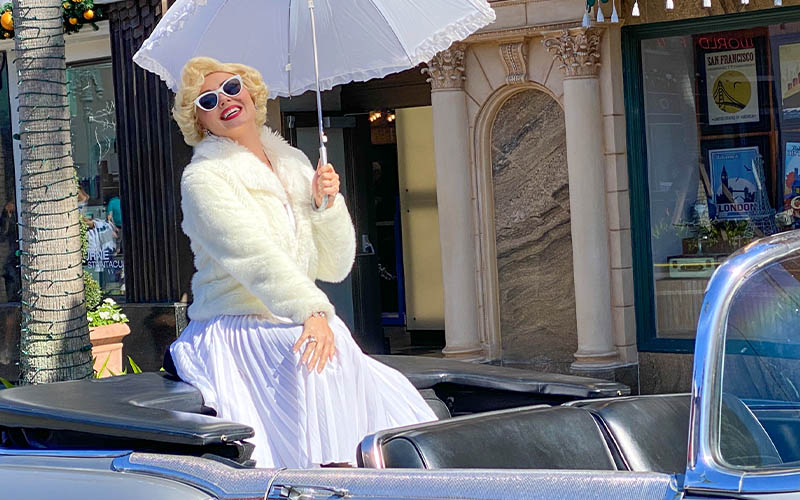 You'll find several familiar faces wandering around the streets of Hollywood at many points throughout the day such as the sassy Betty Boop, the glamorous Marilyn Monroe, the eccentric Doc Brown, the bedeviling Beetlejuice, the adorable Hello Kitty, the nutty Woody Woodpecker, the hilarious Mystery Inc. (i.e. Scooby and the gang) and even the lovable Simpson family! 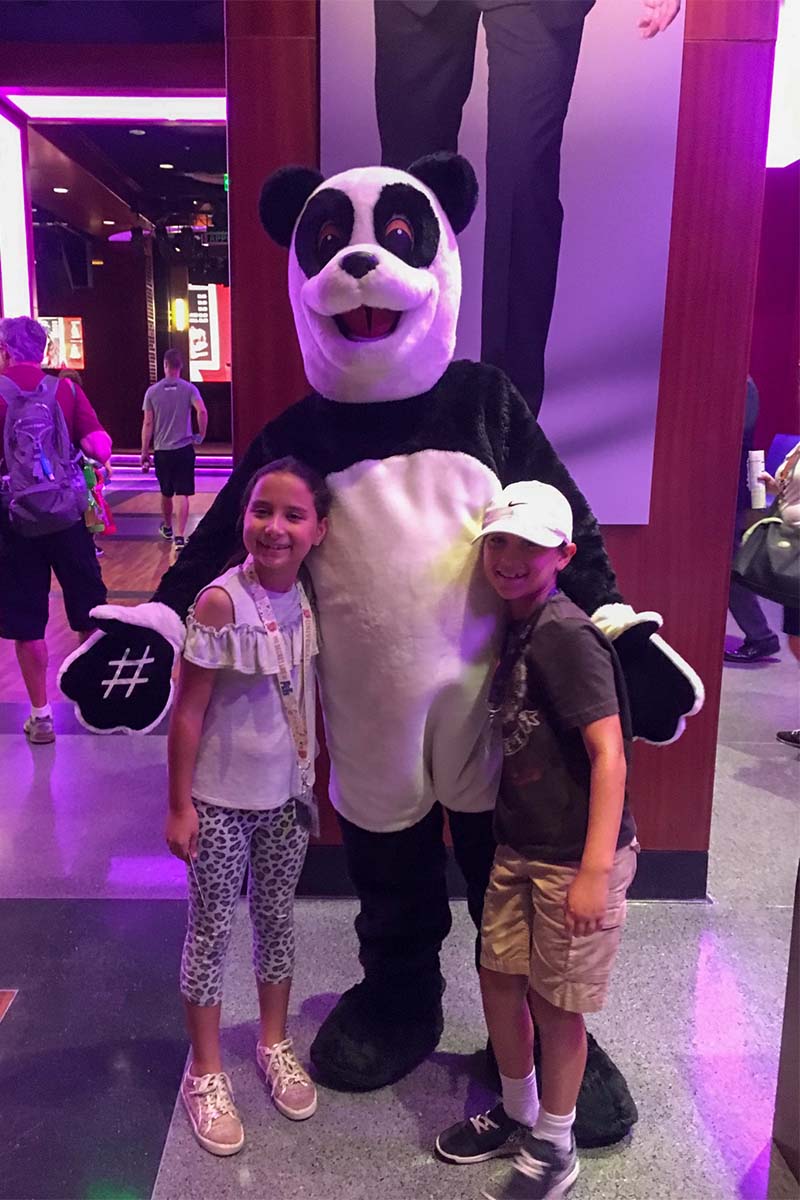 Outside of Halloween Horror Nights where scare actors tend to be game for a freaky photo, Death Eaters emerge from the shadows in Hogsmeade on nights when the Dark Arts of Hogwarts Castle show plays. Voldemort's followers make their grand entrance in a screen of sinister green fog and proceed to set Hogsmeade ablaze with an array of fiendish spells. Our favorite part? Watching brave tadpoles duel with the dark wizards and witches. And yes, if you ask nicely, they will entertain muggles for a selfie.

Character Encounters During the Holidays

This is what you all clicked on this blog for, isn't it? Yes, the viral and magnificently mean Grinch meets his loyal fans every Grinchmas at All The Books You Can Read! (Onion not required.) Elsewhere in Seuss Landing, you'll find the holly, jolly citizens of Whoville, who are here to spread holiday cheer. 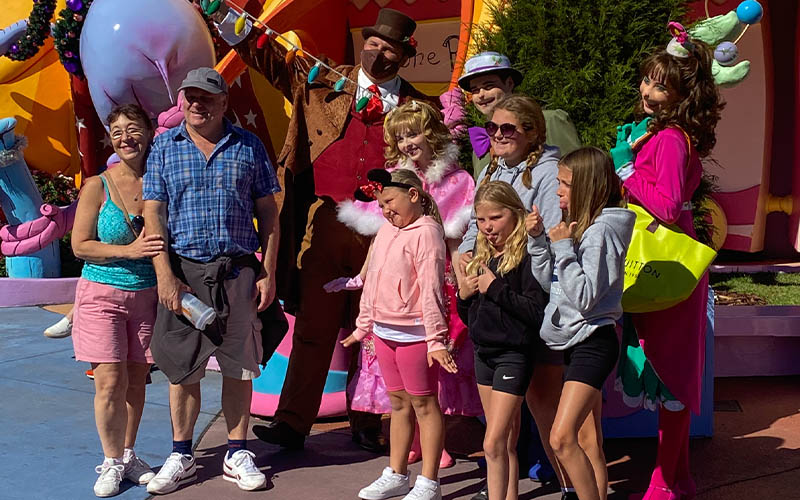 Over in Universal Studios, a wide variety of holiday characters, such as talking toys and stunning snowflakes, are normally out in the streets for photos. Last year, the icon himself, Earl the Squirrel, even got his very first meet-and-greet. We can't get enough of this mischievous little rodent and hope he returns to grace us with his presence this year!

Who's your favorite character to meet at Universal Orlando? Let us know in the comments below!

Related: Our Ultimate Guide to My Universal Photos at Universal Orlando