Visiting Disney's Hollywood Studios means immersing yourself in a variety of movies. Here, you can live your own adventure and be a part of the stories. From classic attractions to new and immersive lands, there is something for everyone! You'll find the most variety of characters at Hollywood Studios and some of the best food and drink! With so much to choose from, we've narrowed down what you won't want to miss. 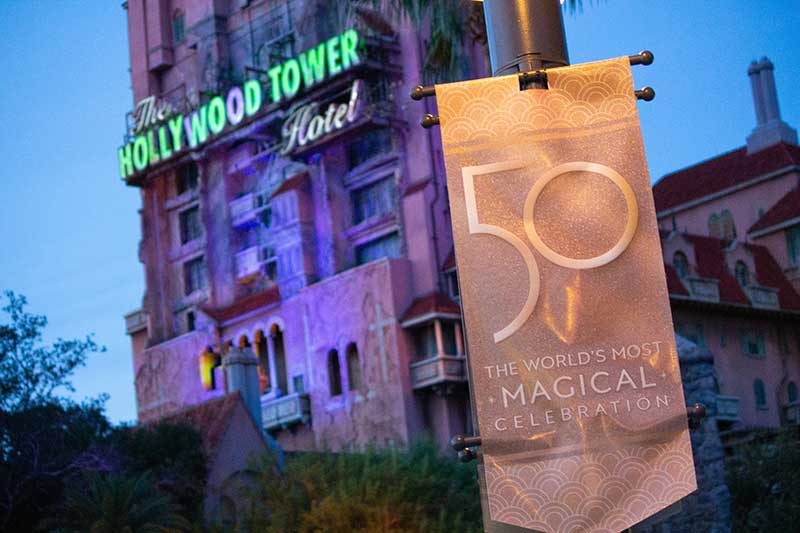 For longer trips or short local visits, we recommend slowing down and enjoying some of Hollywood Studios hidden gems. If you're only visiting for a short trip, we've listed the rides, experiences and foods and drinks you won't want to miss at Hollywood Studios!

With so many epic attractions to choose from at Hollywood Studios, we broke it up into themed categories. It really depends on your group's interests and ages, but the great thing is that Hollywood Studios has something for everyone!

For the Thrill Seeker 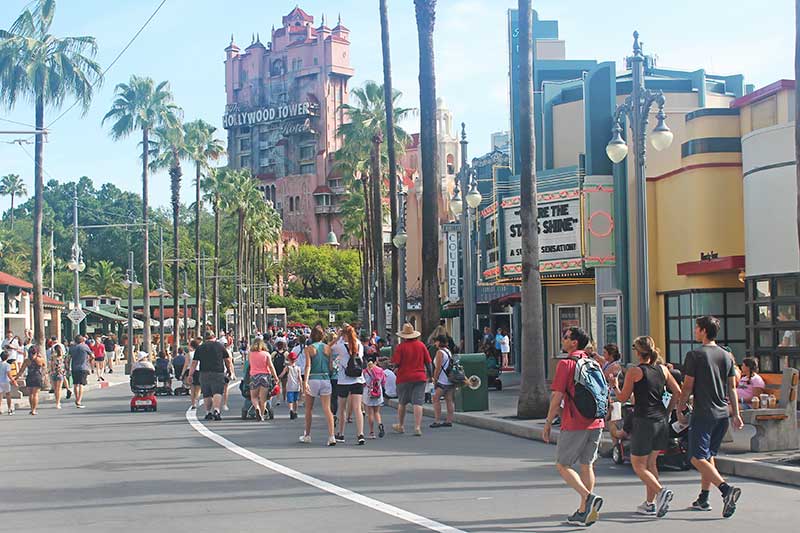 The height requirement for the Tower of Terror is 40 inches while Rock 'n' Roller Coaster is 48 inches.

For the "Star Wars" Fan 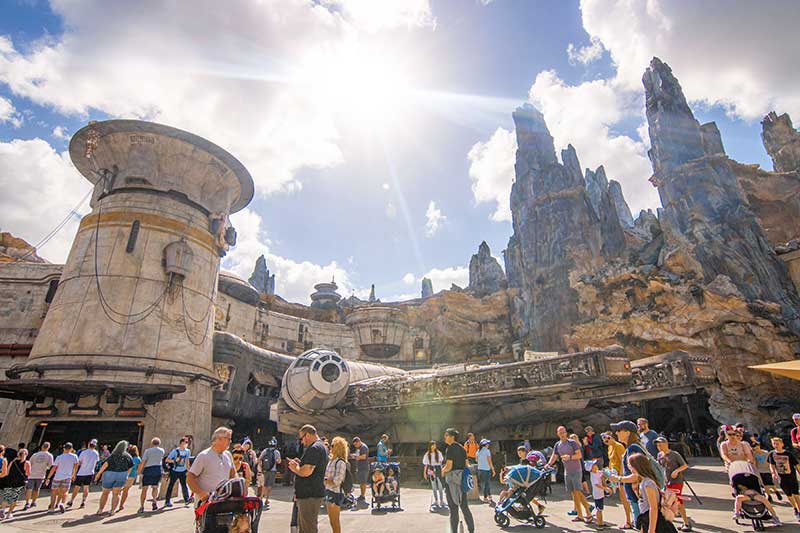 The Force is with you if traveling to Hollywood Studios as there are lots of "Star Wars" attractions. First enjoy Star Tours – The Adventures Continue, a 3D flight simulator that travels through different scenes from the films. Plus, there are more than 100 possible combinations so it's a different ride every time! Then, make your way into the incredible immersive Star Wars: Galaxy's Edge with two very popular attractions. Millennium Falcon: Smugglers Run allows you to pilot the famous ship yourself. And the high-tech Star Wars: Rise of the Resistance is an awe-dropping experience you won't want to miss!

Smugglers Run has a height requirement of 38 inches, while Rise of the Resistance and Star Tours require 40 inches.

For the "Toy Story" Fan 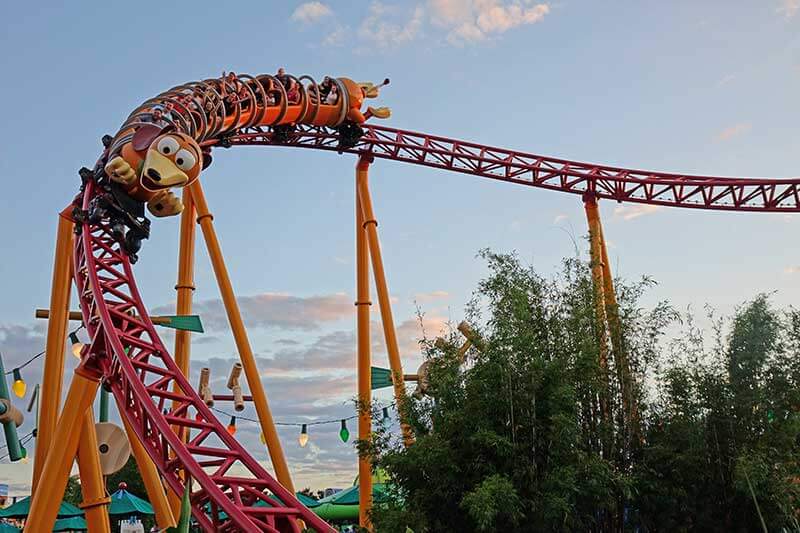 You've got a friend in me at the colorful Toy Story Land that's perfect for the whole family! Hop aboard Slinky Dog Dash for a wild ride above Andy's backyard. The height requirement for Slinky Dog Dash is 38 inches. Then try your hand at Toy Story Mania, a 3D attraction using your shooter to hit colorful carnival targets. See who will get the high score!

Hollywood Studios' newest attraction is the first ride at any Disney park to feature Mickey Mouse and friends! Mickey and Minnie's Runaway Railway is a cute train attraction that immerses you in the Mickey Mouse cartoons. With no height requirements, this whimsical ride is perfect for the whole family! In Toy Story Land, tadpoles will love spinning around Alien Swirling Saucers. Enjoy some "Toy Story" space tunes as you follow along with our favorite green aliens. The height requirement for Alien Swirling Saucers is 32 inches. 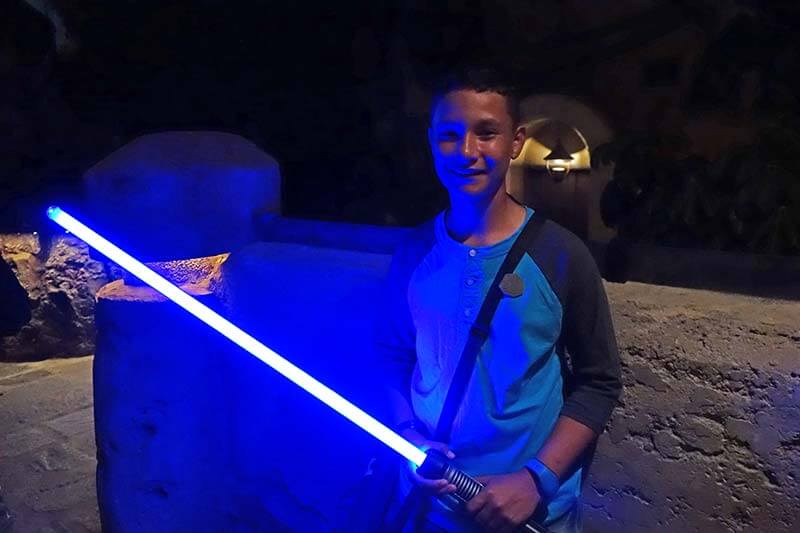 That's right! You can actually build your own lightsaber and droid. It doesn't matter whether you're a grown frog or youngling — you will get emotional during this experience. Boy, I sure did. Inside the immersive Savi's Workshop, you customize the pieces of your hilt and your blade color. The experience costs $219.99, plus tax and reservations are available online starting 60 days in advance. At Droid Depot, pick pieces and parts off of a conveyor belt to construct either an R-series or BB-series of your very own. This experiences costs $99.99, plus tax and reservations are recommended. 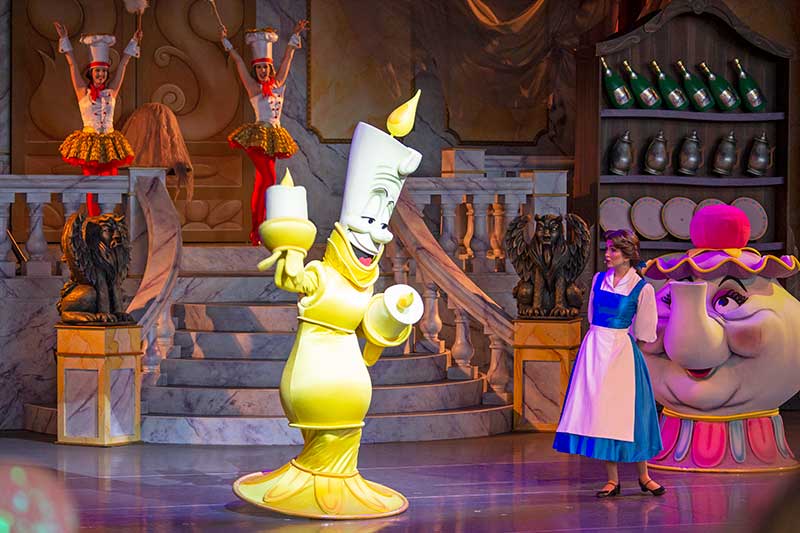 Fans of the Disney Princesses have two wonderful stage shows to enjoy at Hollywood Studios. Beauty and the Beast – Live on Stage is a 25-minute theatrical retelling of the film. This Broadway-style show features beautiful costumes, favorite songs from the movie, dancing and more! Held in the open-air Theater of the Stars on Sunset Boulevard, this show is a park classic.

Hop inside the Hyperion Theater for For the First Time in Forever: A Frozen Sing-Along Celebration (say that five times fast!). The hilarious Arendelle royal historians take us through moments and songs from the first film. Be prepared to sing along! It is such a funny show and has different jokes each time. I don't know who enjoys the show more — the tadpoles or me and Leap! Plus, it's the perfect show to, ahem, stay cool during the afternoon.

You won't want to miss the action-packed Indiana Jones Stunt Spectacular! The 30-minute show begins with Indiana Jones reenacting a scene from "Raiders of the Lost Ark," complete with the gigantic boulder “chasing” him on the set. What follows is a series of realistic fight scenes, explosions, acrobatics and pyrotechnics. It’s suspenseful, funny and a Hollywood Studios classic, as it opened in 1989, the same year the park opened!

The show recently reopened which made our adventurous hearts very hoppy! Though not currently available, normally the “director” will recruit audience members to participate in the show. Raise your hand, yell and scream; if you’re picked, you’ll have a blast. The audience participation is always a fun element of the show, which will hopefully return someday. 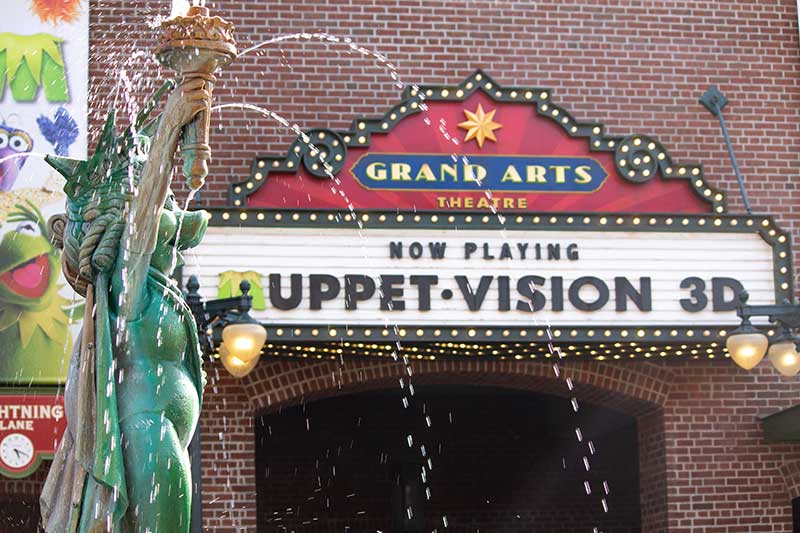 We never miss this classic gem (plus we get to see our fellow frog friend)! Muppet*Vision 3D is a hilarious 3D show featuring the beloved Muppets. Join Kermit and friends as they show off their exciting 3D effects before shenanigans occur. This is a great show for the whole family and a perfect afternoon break to beat the heat. 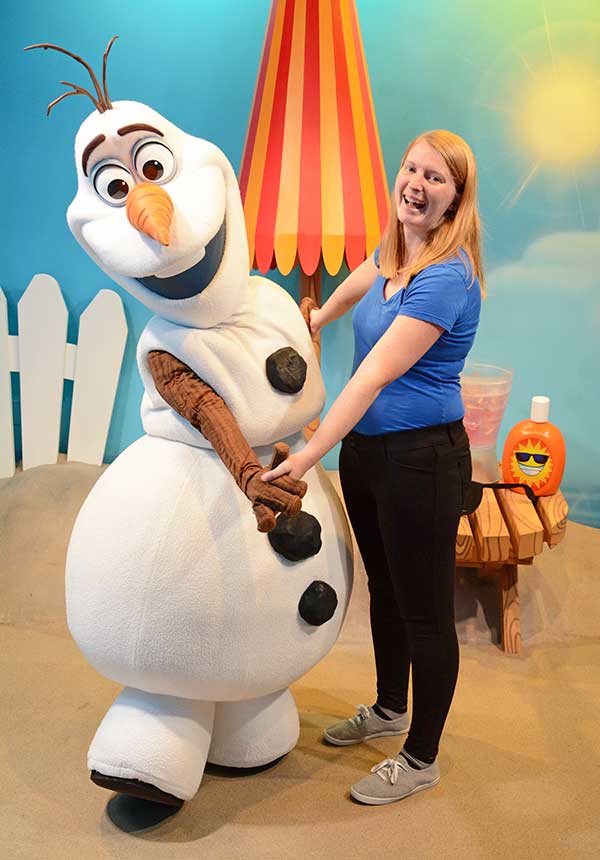 There's quite a variety of characters to see at Hollywood Studios! There is a mix of set character locations along with spontaneous sightings. Mickey and Minnie are back to meeting at Red Carpet Dreams, as well as Olaf at Celebrity Spotlight. You can catch Vampirina, Doc McStuffins, Fancy Nancy and Pluto over in Animation Courtyard. Remember, traditional character meet-and-greets are slowly returning, as of April 18, so you'll be able to get in hugs and autographs at certain locations!

Throughout the day, you may see Goofy near the Tower of Terror, Daisy and Donald near the front entrance and Chip 'n' Dale having a picnic by The Hollywood Brown Derby. Keep an ear out for the sounds of the Pixar Pals Motorcade as it travels through the park about every hour. Check the My Disney Experience app for showtimes. Over in Star Wars: Galaxy's Edge, you can hoppen upon Rey, Chewbacca and Vi Moradi, as well as Kylo Ren and the Stormtroopers. 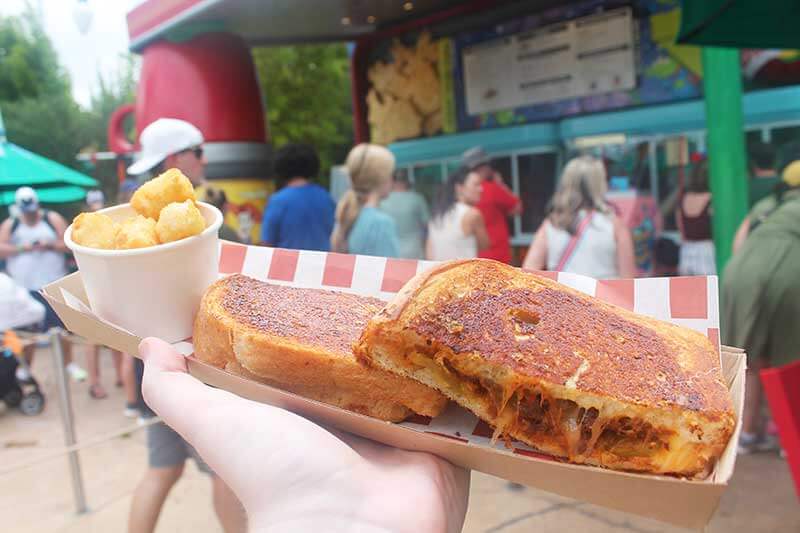 Dine among your favorite toys at Woody’s Lunch Box, one of our favorite spots at Hollywood Studios. Start your day with a Breakfast Bowl and later feast on a Grilled Three-Cheese Sandwich, BBQ Brisket Melt or “Totchos,” potato barrels — or tater tots — piled with chili, shredded cheese and signature queso, tomatoes, corn chips, sour cream and green onions. Then, treat yourself to a Lunch Box Tart. We recommend mobile ordering ahead of time — you won't want to miss this popular location! 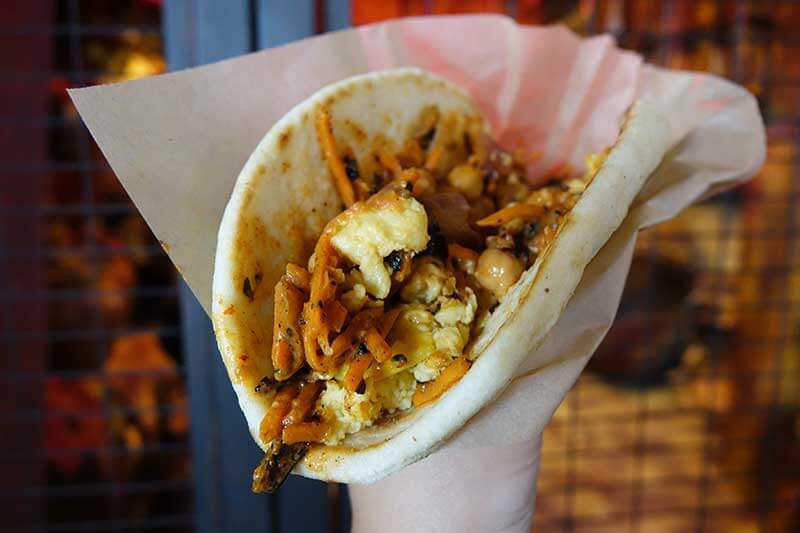 Looking for food that's out of this galaxy? Located in the Marketplace, Ronto Roasters is one of our favorite spots in Batuu. The Ronto Wrap, Zuchii Wrap, the Ronto Morning Wrap and the Triple Suns Breakfast Wrap vary from $11.49 to $12.99 (but we think it's well worth it, and the Ronto Wrap is big enough to share!). For breakfast, you can get Overnight Oats for $6.99. 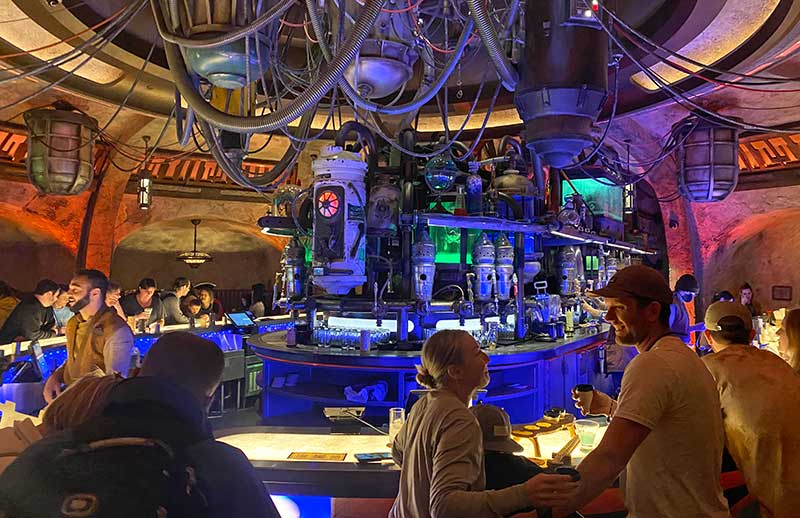 Located in Star Wars: Galaxy's Edge, Oga's Cantina, is the hop-spot for adult drinks, mocktails and other beverages. The cantina offers mostly standing room only, with Captain Rex, formerly of Star Tours — The Adventures Continue fame, playing DJ. It doesn't have too many snack options, but the Batuu Bits has a mix of sweet and spicy bites and the Happabore Sampler consists of cured and roasted meats, cheese and pork cracklings. Frog-favorite drinks here include the sweet T-16 Skyhopper and the Fuzzy Tauntaun, a delicious citrusy mix of orange, tangerine and peach (that literally makes your tongue numb). While it is a watering hole, there are tadpole-friendly options available, including the nonalcoholic, cookies-and-milk-like Blue Bantha.

Reservations are highly recommended in advance. There is a one-drink per person drink minimum and a two-drink per person maximum. Guests will be limited to 45 minutes in the Cantina. Oga's Cantina is a fun, immersive location you won't want to miss! 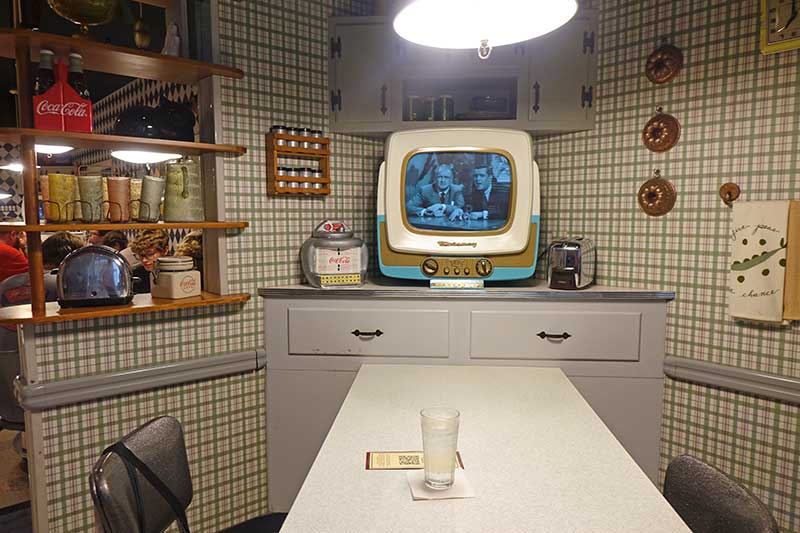 For table-service restaurants, you'll love the theming of 50s Prime Time Cafe! It’s just like Mama’s in the kitchen, serving up classics of yesteryear at this one-of-a-kind restaurant. This retro eatery comes with a side of humor dished out by your servers. Make sure to keep those elbows off the table! Enjoy comfort food favorites such as Mom's Old-fashioned Pot Roast, Aunt Liz's Golden Fried Chicken and Cousin Megan's Traditional Meatloaf. To satisfy your sweet tooth, you’ve got to try the Peanut Butter and Jelly Milk Shake! Next door at the Tune-In Lounge, guests can enjoy the 50s Prime Time Café menu along with a full bar in a distinctly vintage setting. 50s Prime Time Café and the Tune-In Lounge are located around Echo Lake near the Indiana Jones Epic Stunt Spectacular.

What's your not-to-miss at Disney's Hollywood Studios list? Let us know in the comments below!