Your Royally Good Guide to Finding Princesses at Disney World 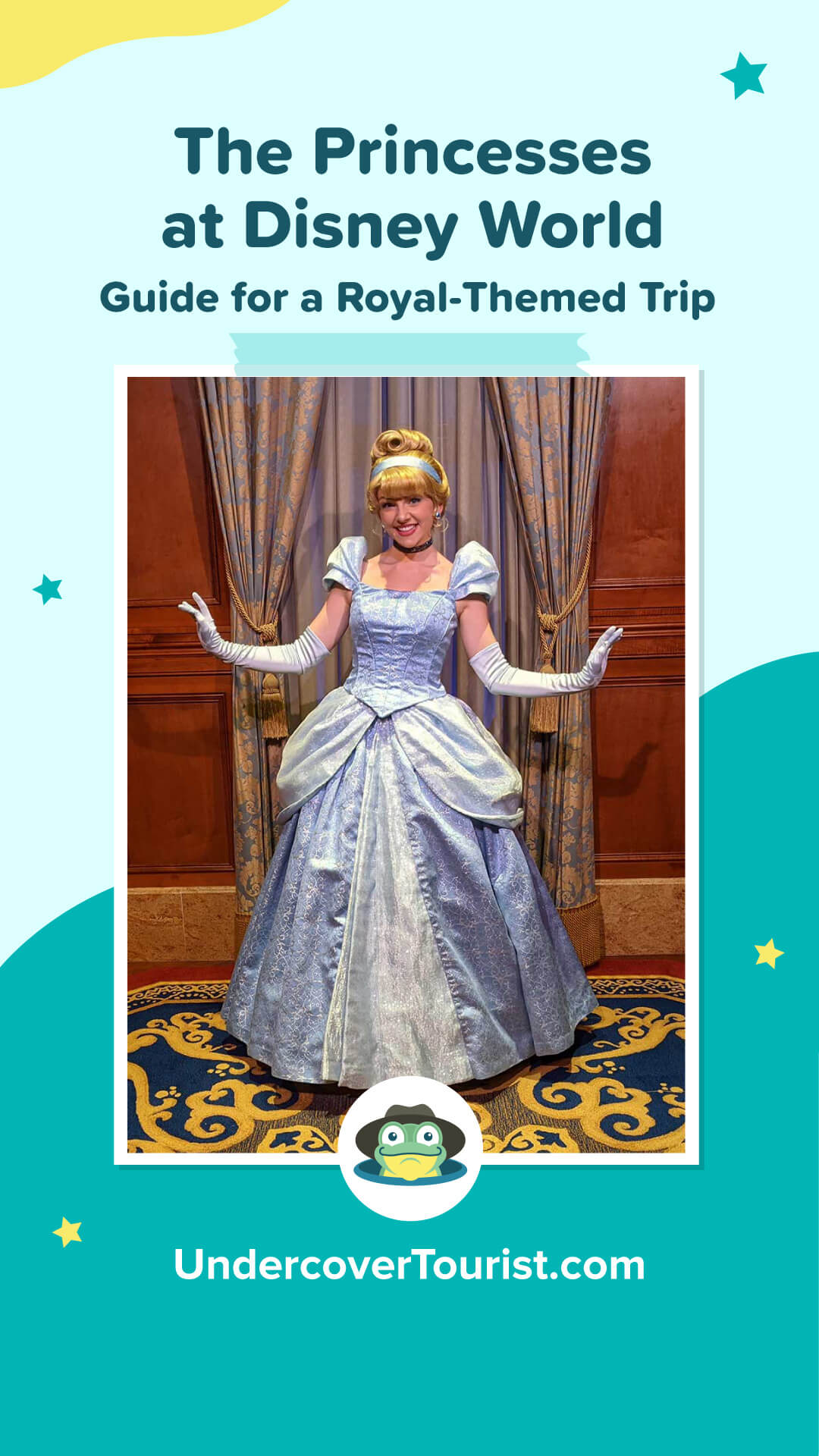 When you think of Disney, it's hard not to picture the many princesses and their classic stories. I remember Lily's "Frozen" phase vividly (I'm partial to Tiana myself — who doesn't love a good frog story?). From classics such as Cinderella and Snow White, to newcomers such as Moana and Rapunzel, each princess has a unique story and different ways to connect with others.

Traditional character meet-and-greets continue to return, which means hugs and autographs are back with many of your favorite princesses! It was so fun chatting with Belle about our favorite books or letting Lily show off her matching dress with Rapunzel. Royal hugs are the best hugs!

One of the best parts of a trip to Disney World is getting to see these incredible princesses. It's a truly magical moment for tadpoles and frogs alike. Is your young princess or knight eager to meet their favorite royalty? Do you have a character you just have to say hi to? Read on for our froggerific guide to the princesses at Disney World!

All the Ways to Find Princesses at Disney World

When I think about finding the princesses at Disney World, I automatically think of character greetings, of course. There's just something magical about meeting the princesses in person. But there are other ways the princesses and their stories may appear across the resort, whether it's an animatronic on a ride or a painting in a princess-themed hotel room. 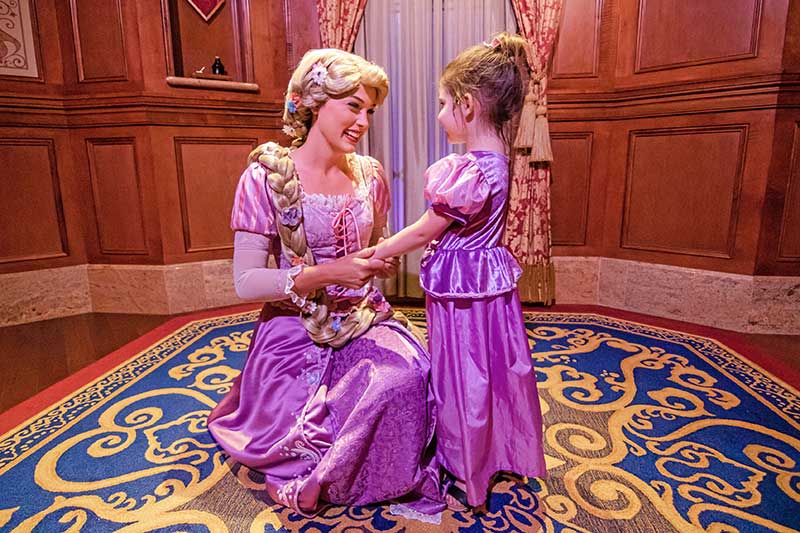 As of April 18, 2022, traditional meet-and-greets are gradually returning to Disney World, and most of the princesses have already returned to normal greetings! It's so lovely to see our favorite royalty back in their locations. Grab those autograph books because characters at these locations are signing again!

If you want to see as many princesses as you can in one park, head to Magic Kingdom. Many of the princesses appear in either the Festival of Fantasy parade or the Disney Adventure Friends Cavalcade. Double-check the My Disney Experience app for showtimes. 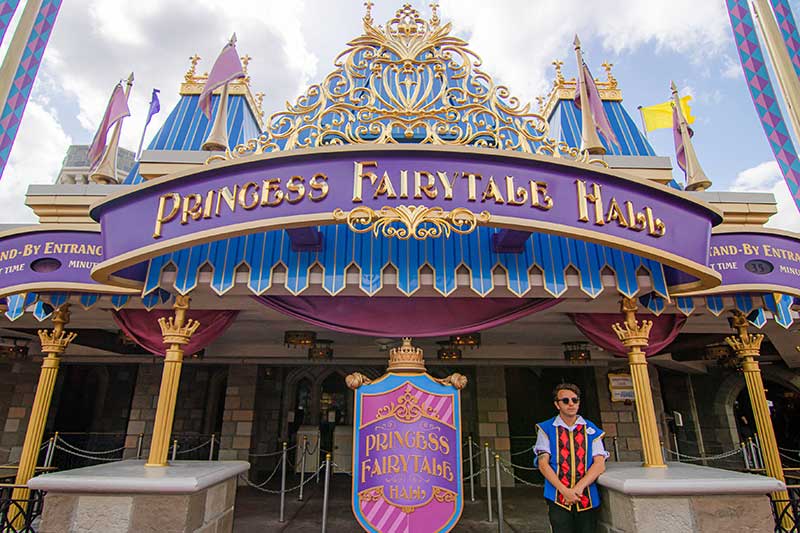 Royal fans can't leave Magic Kingdom without visiting Princess Fairytale Hall! There is one queue for Cinderella and Elena and another line for Rapunzel and Tiana (though sometimes you'll get a mystery visiting princess, like we did on our last visit). We love this location because it's inside and there's always PhotoPass photographers at each princess to capture the wonderful memories.

While Enchanted Tales with Belle has not reopened, Belle now meets in that location in her blue village dress. Since Maurice's Cottage is off the beaten path, her line is often very short. We recently hoppened upon her with barely any wait at all! 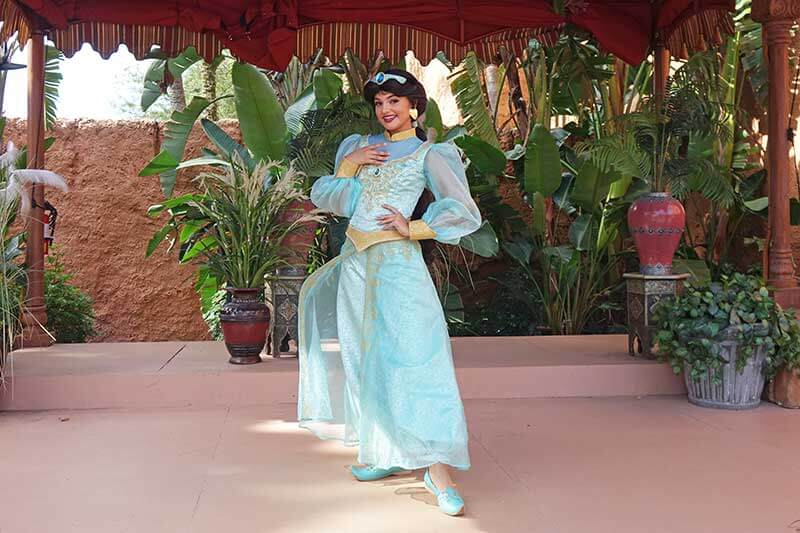 Did you know many of the princesses' stories originate from various countries around the world? You can meet the princesses throughout World Showcase at EPCOT, each one representing a part of a real-life culture. See Anna and Elsa at Norway, Mulan in China, Snow White in Germany, Jasmine in Morocco, and Aurora and Belle in France. Check the app for set times — we recommend arriving earlier in the set if possible, as the lines can get cut off towards the end. 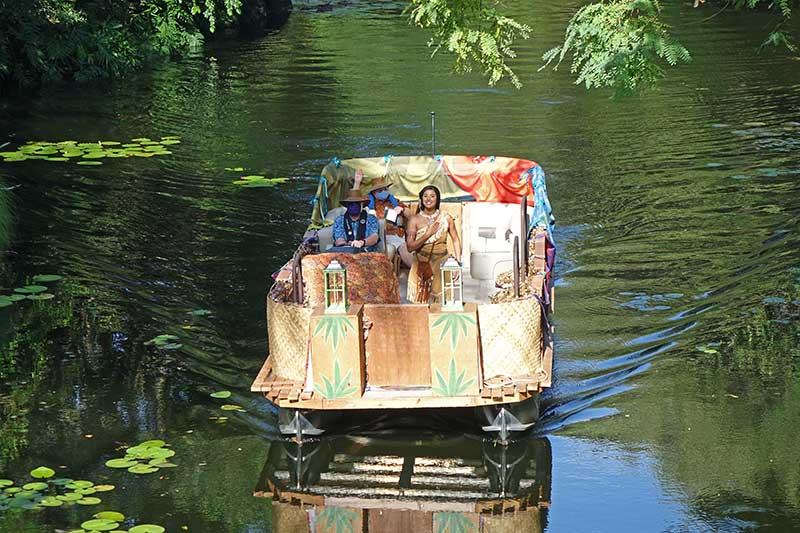 Pocahontas is one with the wilderness as the only princess at Disney's Animal Kingdom. She may be just around the riverbend as she randomly travels via boat. Sometimes Meeko even joins for an adventure! The boats travel around Discovery Island; we recommend trying to see them from the bridges into the different lands as well as most parts of Africa and Asia.

Right now, character dining experiences are modified and slowly returning. At Magic Kingdom, enjoy dining in the castle at Cinderella's Royal Table. Usually, several other princesses join her, but only Cinderella makes a socially distanced appearance at this time. Over at Disney's Wilderness Lodge, you can see Snow White, Doopey, Grumpy and the Evil Queen at the Story Book Dining at Artist Point. We are still waiting for the other princess-themed character dining experiences to return at Akershus Royal Banquet Hall, 1900 Park Fare and Trattoria al Forno

You, too, can be a part of Ariel's world with Under the Sea: Journey of The Little Mermaid. This slow-moving ride takes you through the whimsical scenes from the movie (and is a great way to beat the heat). Fans of Snow White will love a ride on the frog-favorite Seven Dwarfs Mine Train. Be just like Jasmine in a whole new world on the Magic Carpets of Aladdin soaring around Adventureland. Or, see the story of "Frozen" unfold through a slow-moving boat ride on Frozen Ever After in Norway at EPCOT. 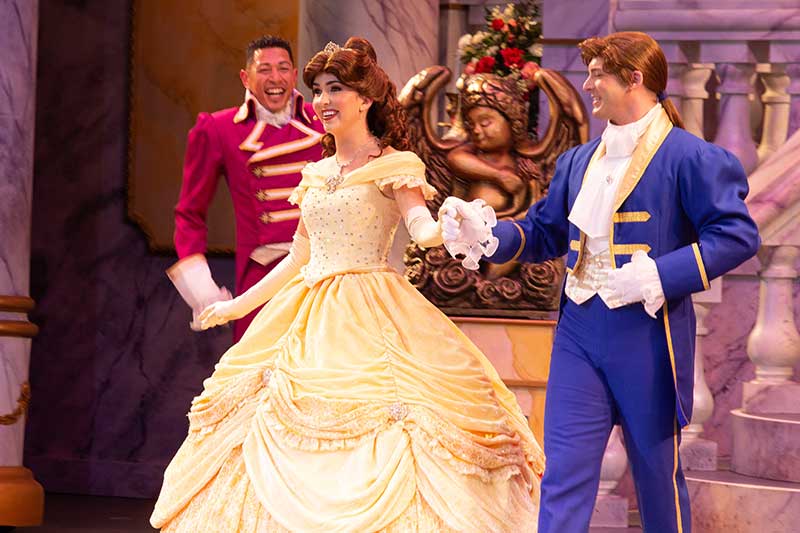 Over at Disney’s Hollywood Studios, you can see Anna and Elsa in “For the First Time in Forever: A Frozen Sing-Along Celebration” at the Hyperion Theater. Get ready to "Let It Go" with this show for the whole family. Now this isn't just any "Frozen" sing-along. This fun and comical retelling of the events of "Frozen" will have all frogs laughing and singing along.

Also at Hollywood Studios, Beauty and the Beast – Live on Stage is a Broadway-style show that takes you through Belle's iconic story, with plenty of musical fun! Can't get enough of Belle? Sing all of your favorite tunes at the Beauty and the Beast Sing-Along in France over at EPCOT.

While it's not a play area, "Tangled" fans of all ages may enjoy the themed restrooms in Magic Kingdom's Fantasyland. You can even spot Rapunzel's tower from Frontierland! Look for wanted posters with familiar faces around the area, and try to find all of Pascal's hiding places. 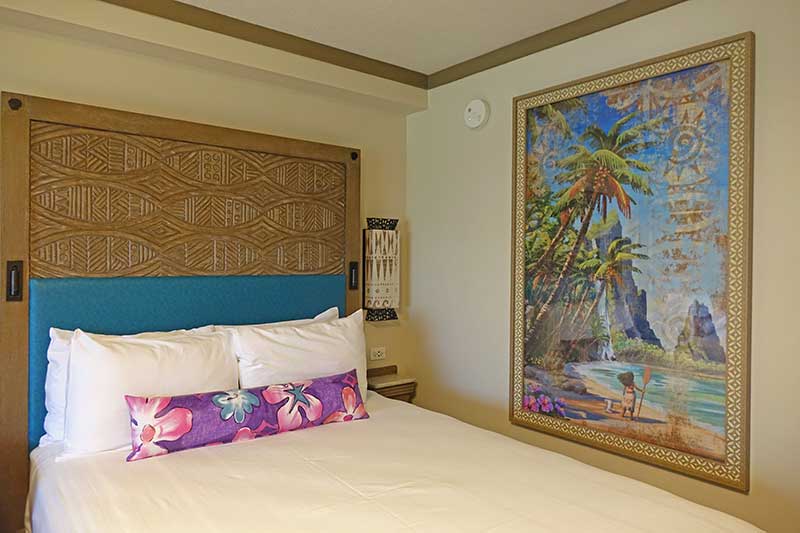 Are you staying at a Disney World Resort hotel? Slumber like Aurora in special princess-themed guest rooms at some of the hotels. Disney's Polynesian Village Resort recently underwent a major refurbishment, and now the guest rooms have a "Moana" theme. See if you can spot Moana, Maui and Hei Hei in the decor! At Disney's Port Orleans - Riverside, request a Royal Guest room, which highlights Tiana and her fellow princess friends. Over at Disney's Art of Animation Resort, stay in one of The Little Mermaid rooms and relax at the Flippin' Fins Pool.

More exciting ways to connect with the princesses and their stories are headed our way in the future. The very first "Moana"-themed attraction will be part of EPCOT's ongoing transformation. Journey of Water will be a walkthrough experience with interactive elements. The plan to re-theme Splash Mountain into a "The Princess and the Frog" ride is still in the early stages of development. We will eventually be able to take a new journey alongside Tiana, which unfolds after the movie's final scenes.

Where to Find Each Princess at Disney World 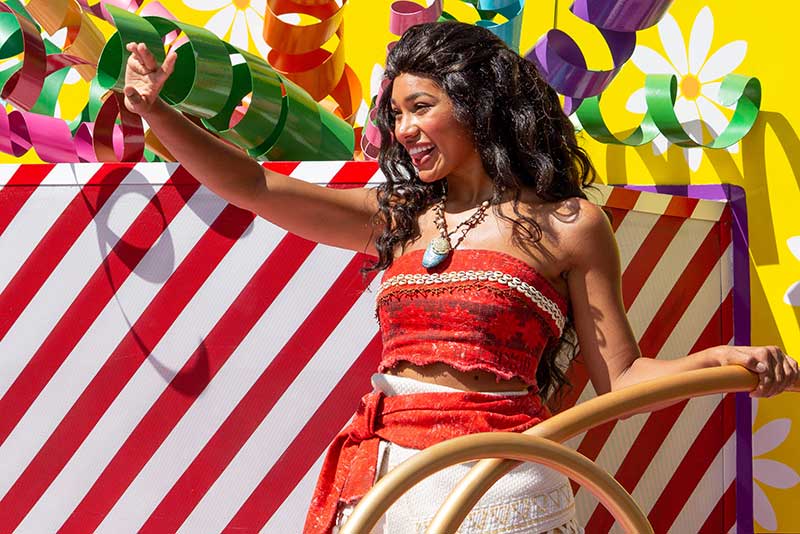 Now that you know how you can see the princesses around Disney World, we've compiled this list so you know exactly where to find each princess.

Note that with the popularity of "Frozen," we even made a separate guide just on finding our favorite Arendelle sisters, Elsa and Anna!

Sweet Treats in Honor of the Princesses 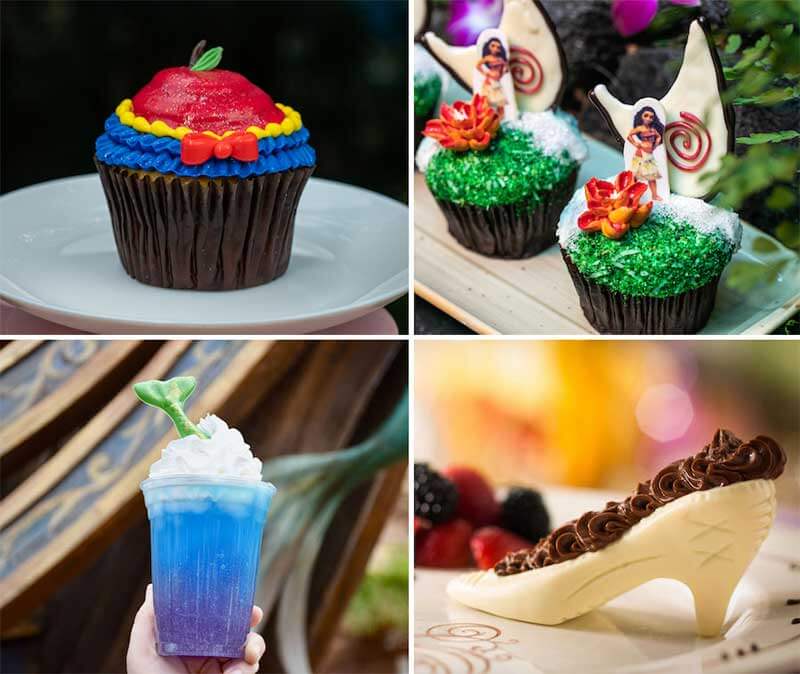 Savor lots of drinks and treats worthy of royalty with lots of princess-themed goodies at Disney World! We are always amazed at how Disney food can be such works of art. They're almost too pretty to eat ( ... almost)! Each of the four parks, Disney Springs and many of the resorts may offer various princess-themed items. Treat your adventurer to the Moana Cupcake at Disney's Polynesian Village Resort. Enjoy a Snow White cone from Storybook Treats at Magic Kingdom. And dine inside Cinderella Castle for a treat at Cinderella's Royal Table. Some offerings are only for a limited time and are subject to availability. You never know what speciality items you might find!

Time to be as swift as a coursing river with the Disney Princess Half Marathon Weekend! Taking place every spring, this runDisney event celebrates the kindness and courage of the many Disney princesses. With varying race lengths from 5K, 10K and half marathon (or try the Fairy Tale Challenge if you're up for running 19.3 miles in two days), there is something for beginner and advanced runners alike. Have you ever wanted to run through Disney World? Now you can, and some of the races take you straight through Cinderella Castle! Just don't be like Cinderella and keep both shoes on.

With rare character greetings along your route, themed medals and more, the Disney Princess Half Marathon Weekend is a perfect way to celebrate the princesses.

Related: The Best Ways to Meet Anna and Elsa at Walt Disney World

Related: All of the Places to See Mickey at Walt Disney World