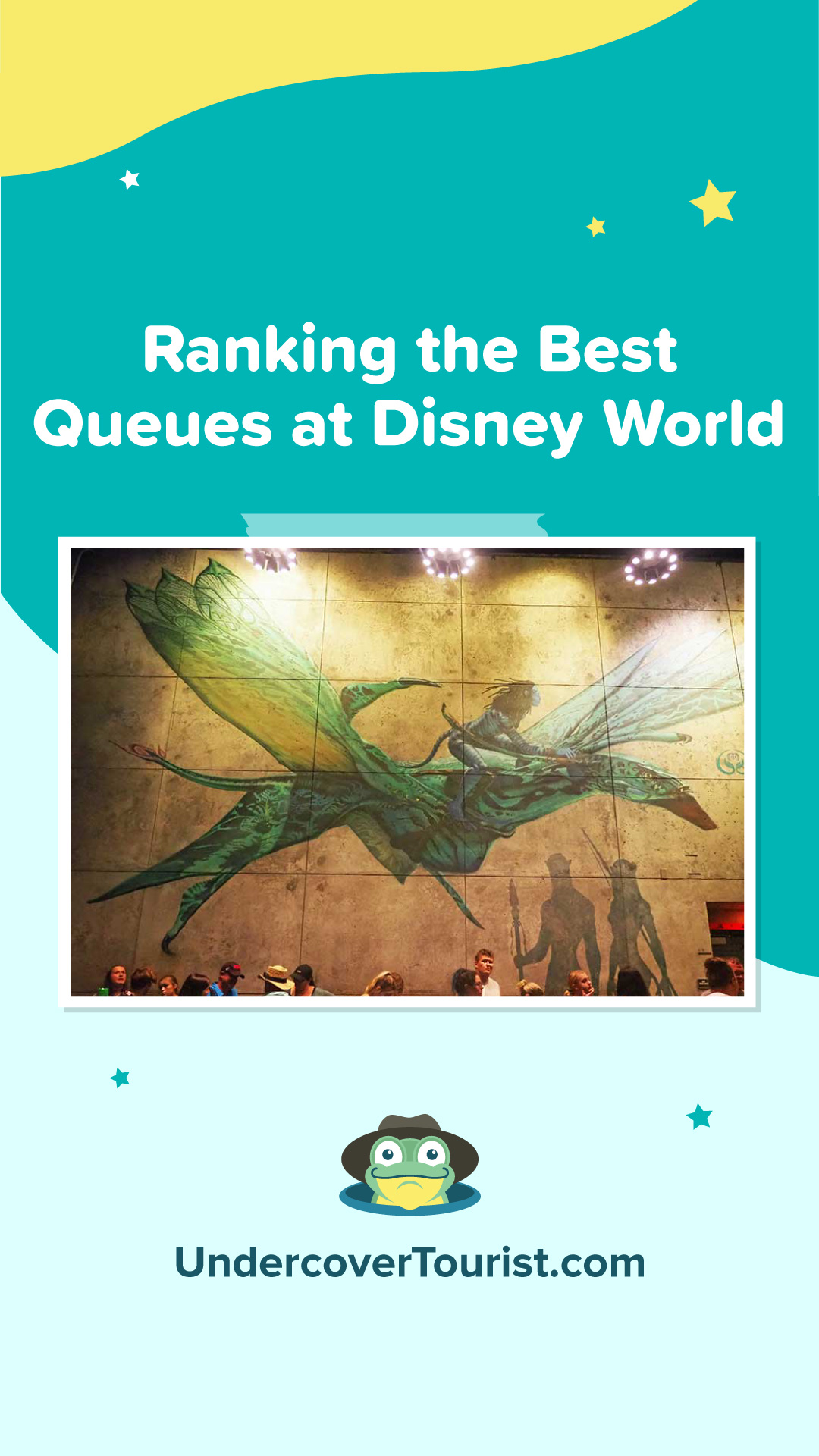 Sup'? Tad here. As the resident videographer of the Frog Family, I've helped capture footage of the many fantastic attractions at Walt Disney World (you can check all my vids on our YouTube channel!). But the real storytelling begins in the queue. The attention-to-detail is quite incredible — the Disney Imagineers put a lot of effort into the queues to help with storytelling. Lots of ride queues at Disney World contain interesting props, animatronics, special effects and sounds that immerse you into the story. There are also small details and pre-shows that help fill in that important backstory before entering the ride vehicle.

Waiting in lines for a long time isn't always fun, but certain queues have so much to look at and interact with, that time just flies by. It's nice to explore the magical details and see what hidden references we can find (you never know when you might discover a hidden Mickey!).

Well, let's hop into our rankings of the best queues at Disney World!

The Best Queues at Disney World

We've picked out our 10 favorite queues at Disney World in regards to theming, interactivity, and storytelling. If you have to wait in line, you might as well take in the incredible details Disney Imagineering puts into the queues.

Though not in our top 10, we wanted to give an honorable mention to Dumbo in Magic Kingdom. As one of the best queues at Disney World for those with young children, Dumbo's queue features a large play area to keep them occupied. You'll return to the line once your pager rings and then you're ready to soar like Dumbo!

10. The Many Adventures of Winnie the Pooh (Magic Kingdom) 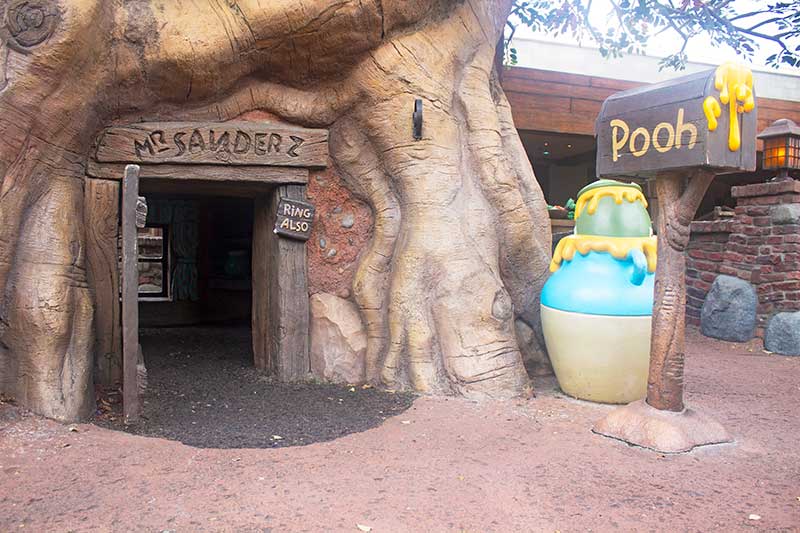 It's time to travel to the Hundred Acre Wood! The Many Adventures of Winnie the Pooh is a fun attraction for tadpoles as guests journey through scenes with Pooh Bear and friends. There's something about "Winnie the Pooh" that is so whimsical and perfect for the child in all of us.

Keeping to that theme, the queue for this Fantasyland attraction helps keep kids entertained with interactive elements. First, explore Rabbit's garden, which has hands-on moving pieces and a soft ground perfect for hopping along. Then, there is a metal track with small "bee" cars that kids can push along through the different hives. The most interactive portion is the digital honey walls, where you can use your hand to paint and wipe away the honey to reveal our storybook friends. (Don't worry — no actual honey is involved, though you may want to have hand sanitizer ready after touching the popular wall).

You can't miss the entrance to Star Tours: The Adventures Continue with the large AT-AT Walker looming above! This classic Hollywood Studios attraction is a 3D space flight with different scenes from the "Star Wars" films. There are more than a hundred possible combinations so you never know what you'll get!

After first heading underneath the AT-AT Walker, the outside portion of the queue looks just like the Ewok forest village of Endor (at night, you'll even hear the Ewoks partying!). Inside, you'll find yourself in a spaceport terminal (essentially a space airport). Catch C-3PO and R2-D2, as well as hidden Disney references throughout the queue. 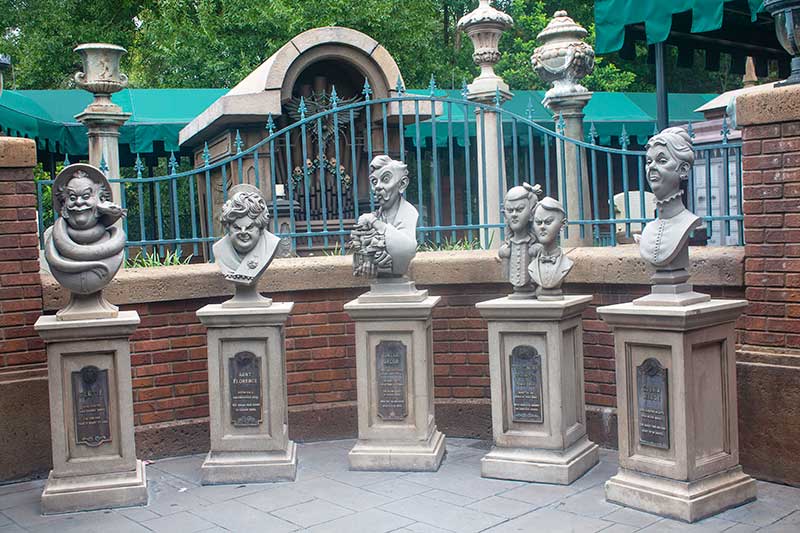 With its resident number seemingly stuck at 999, the Haunted Mansion has welcomed foolish mortals since Magic Kingdom's opening in 1971. One of the most popular attractions in the park, this classic haunted home has one of the best queues at Disney World.

With witty phrases on the gravestones and tombs, the queue helps set the tone that the Haunted Mansion is more silly than spooky. There are also interactive elements added in that react to your touch. Play a few notes on the Ravenscroft organ or touch the classic or creepy instruments on the composer's tomb. Can you push in all of the books that mysteriously pop in and out from the bookshelf? It can be quite a challenge. The ghoulishly fun additions to the queue can help your timid tadpoles feel better about approaching the foreboding mansion.

Over at Disney's Animal Kingdom, prepare to get soaked at Kali River Rapids, the main water ride at Disney World. Located in Asia, head on a thrilling whitewater adventure as you glide and dive through the fast-moving river. This attraction is very popular in the summer as a way to cool off and beat the Florida heat.

Kali River Rapids is one of the most detailed queues at Disney World. Home to dozens of native artifacts, statues and other details, the setting starts to take shape. Enjoy a great view of the monkey habitat and its playful primates before seeing a glimpse of the approaching rapids. You then find yourself inside a huge shine. In the center lies a huge stone cat, surrounded by poles and fruit offerings. In another corner, you'll find an area with costumes and masks. Make your way into the rafting company's travel office with details such as an old typewriter, cameras and film. Right before you board your raft, you find yourself under dozens of prayer flags. After taking in all those details, it's time to hop on a raft and cool off! 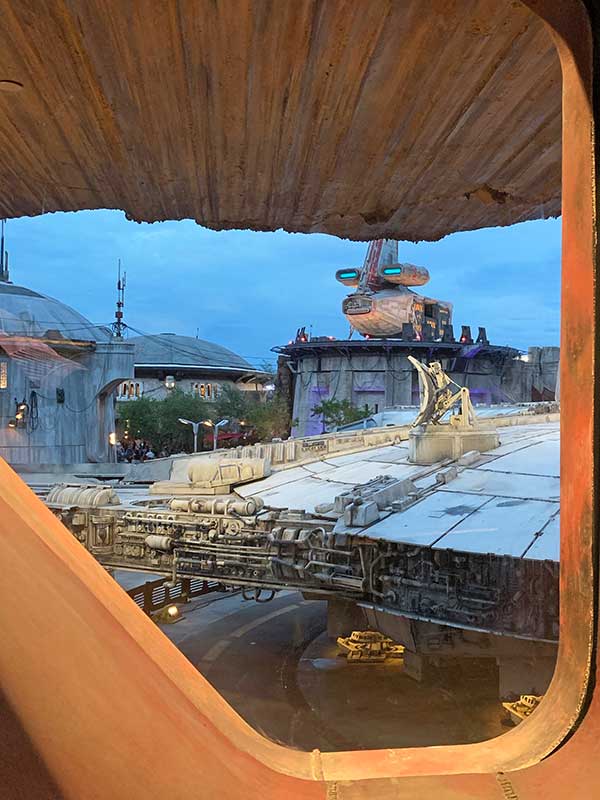 Ever wanted to try your hand at piloting the Millennium Falcon? Well, now you can with Millennium Falcon: Smugglers Run at Disney's Hollywood Studios! It'll take a whole group of pilots, gunners and engineers to help get this ship back in one piece on this exciting "Star Wars" adventure.

The Smugglers Run queue continues the immersive theming found in Star Wars: Galaxy's Edge. You'll first get an up-close view of the back and side of the Falcon. Next, head inside the mechanic shop with ships and intricate details — including engines powering up or voices on the intercom — that make you feel like you're in an actual space shipyard. You'll get another unique view looking down onto the Falcon and Black Spire Outpost before heading into the pre-show with the impressive Hondo Ohnaka animatronic. Finish out the queue by walking onto the Millennium Falcon. How cool is that?

The Lightning Lane entrance has similar theming but only glimpses of the large mechanic room. The Single Rider line skips a large portion of the queue. 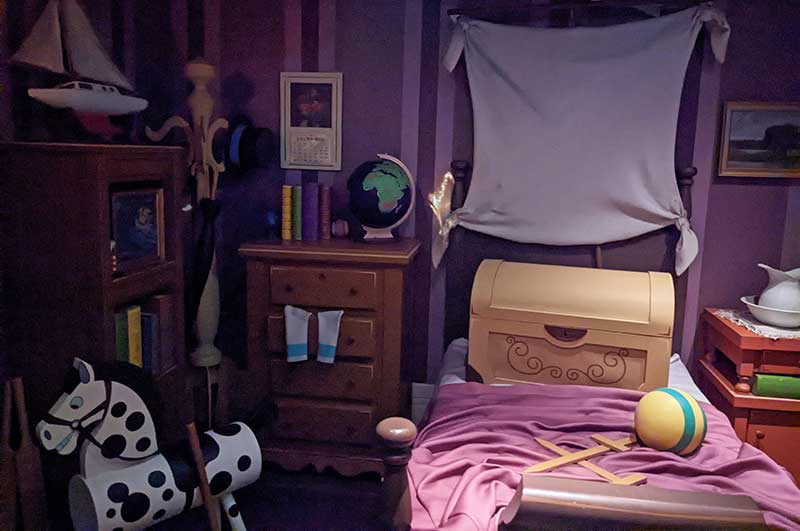 We're off to Neverland! One of the original attractions at Magic Kingdom, Peter Pan's Flight tells the story of the Darling children and the boy from Neverland. This ride is always very popular and can have high wait times, but the beautiful queue helps continue to build the magical storytelling.

In 2015, Peter Pan's Flight received an update with more interactive elements added to the queue. Full of dazzling special effects, guests find themselves wandering through the Darling household and experiencing some rather enchanting encounters. The most impressive feature is Tinker Bell, who flies around the room — illuminating and activating different objects. Next up is the shadow room, where the shadows of passing guests can magically play bells and attempt to catch butterflies. Peter Pan has been known to show up, as well. In the final room, clapping your hands brings a pixie-dust-filled surprise.

Note that the Lightning Lane entrance does not go through those rooms and there is no additional theming in that queue.

4. Frozen Ever After (EPCOT)

Since sliding into the Norway pavilion in 2016, Frozen Ever After has welcomed many guests to Arendelle. This popular attraction can still get long lines during peak times, but the good news is that the gorgeous queue makes it worth the wait.

First, you'll see some detailed props in Kristoff's shop (he's the Official Ice Master & Deliverer of Arendelle, of course). Moving further along, you wander into Oaken's Tokens and Sauna. Oaken himself makes an appearance in the sauna. "Big summer blowout!" Much of the queue is inside an Arendelle outdoor courtyard. While it's mostly chain switchbacks, the charming atmosphere elevates the experience. Take a look at lanterns, which feature the profile of Elsa and Anna. The background music loop features instrumental versions of "Frozen" favorites. Performed with era-appropriate instruments — think violins and flutes — this background soundtrack is one of the best we've heard around Disney World.

While Frozen Ever After caters to fans of the film, anyone can find something to enjoy in this attraction. Its gorgeous queue and cheerful soundtrack make this a top choice for one of the best queues at Disney World. 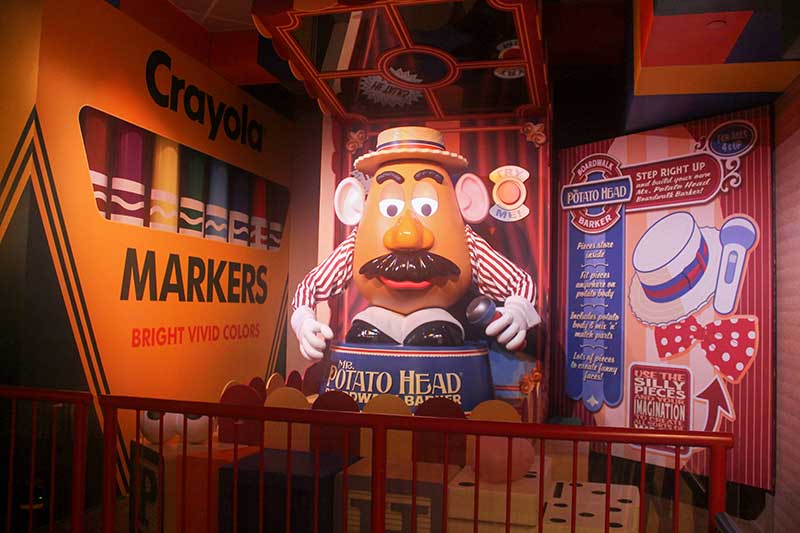 Toy Story Land in Hollywood Studios truly makes you feel like the size of a toy with its incredible theming. Toy Story Mania continues that theming as you step into Andy's room and see the many toys and games in his toy chest. Think crayons, dominos and letter blocks. There are lots of fun references and nostalgia as you walk amongst the classic games.

What is most impressive is the Mr. Potato Head animatronic, which interacts with guests. He helps pass the time with stories and jokes. The animatronic is something you'll miss out on in the Lightning Lane.

Pandora – The World of Avatar opened in 2016 as the first immersive themed land at Disney World. Guests are transported to another planet with the iconic floating mountains. The technologically advanced Flight of Passage attraction continues to be the most popular experience at Animal Kingdom.

The outside portion of the queue continues the beautiful landscape with beautiful waterfalls, rocks and vegetation native to Pandora. You'll enter caves with Na'vi paintings before entering the old human military base. You'll then find yourself walking "outside" at night with beautiful bioluminescent plants. One of the most themed portions is the science lab, which has lots of details and things moving and lighting up — it truly feels like a working lab. The large Na'vi animatronic is quite impressive, and really helps build the immersion as you prepare to ride a banshee just like the Na'vi! 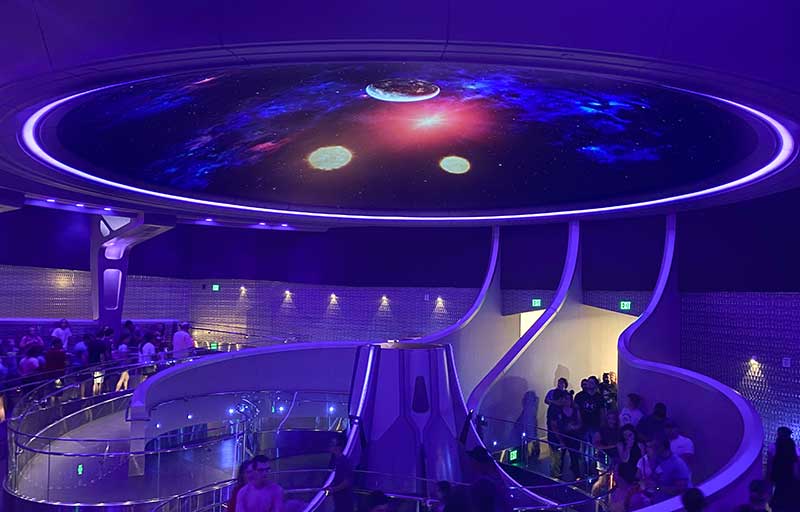 The newest attraction at Disney World also takes over number one for best queues. Guardians of the Galaxy: Cosmic Rewind takes guests on an out-of-this-world experience. This epic coaster combines revolutionary technology and immersive storytelling, plus the amusing banter of the Guardians to bring together an awesome new ride.

The storytelling begins in the queue, which features the first other-world showcase pavilion at EPCOT — The Wonders of Xandar. First, you enter the Galaxarium, a large planetarium-like room highlighting the differences between Earth and Xander's galaxies. Then, you head into the Xander Gallery, which displays interesting models and videos. Keep an eye out through the entire queue for fun Guardians and Disney Parks references.

If utilizing the Lightning Lane, the line shortcuts through the Galaxarium but will bypass the Xander Gallery. Both lines meet for the first pre-show. Head over to our frequently asked questions to learn more about Cosmic Rewind!

What's your favorite queue at Disney World? Let us know in the comments below!