Off on the edge of the galaxy, far, far away is the planet Batuu. Home to rogues and a local Resistance uprising, Batuu is a destination full of wonder and adventure, complete with unique shopping, food, attractions and experiences straight out of the "Star Wars" movies. Luckily, Star Wars: Galaxy's Edge is a short walk from Disneyland Park in California or Disney's Hollywood Studios in Orlando. (The East and West Coast versions are nearly identical, but we will note any park-specific details.) You may not have a lot of time to spend on the planet with so many other lands to visit on your journey, so we bring you our top 10 tips for Star Wars: Galaxy's Edge to help you maximize time and make sure you "Star Wars" fans do not miss any important experiences during your visit to Black Spire Outpost.

To reserve, order or enhance some of these experiences you will need to have the official app. Which app is that? Use the My Disney Experience app at Hollywood Studios in Disney World or the Disneyland app at Disneyland. Here are our top tips for immersing yourself in Star Wars: Galaxy's Edge! 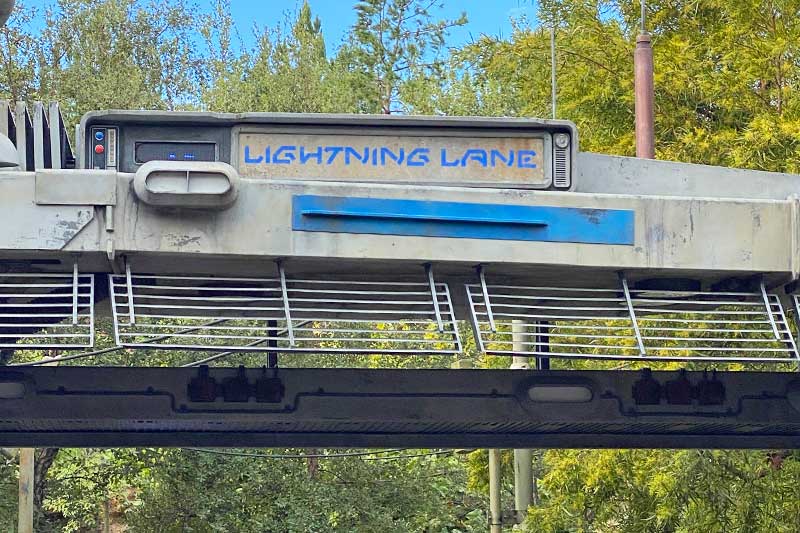 You cannot put a price on battling the First Order with the Rebellion. But you CAN put a price on your own time. Because this ride is still very in-demand, it often has the longest standby line in the park. You can skip it, for a fee, by selecting it as an individual Lightning Lane selection.

Learn more about how to book individual Lightning Lanes (and use Genie+) in our Genie+ FAQ for Disney World and Genie+ FAQ for Disneyland. But make sure you click on the correct park link because time is of the essence at Disney's Hollywood Studios. We are talking about moving at light speed in the morning for your best shot! At Disneyland, you'll want to book sometime in the morning.

If you can’t snag an individual Lightning Lane reservation, you'll want to know how and when to ride Rise of the Resistance with the shortest line. (This individual Lighting Lane selection is tough to get, especially at Disney's Hollywood Studios. It's a little more relaxed at Disneyland.) We have posts on how to get the shortest line of the day if you need (or want) to ride standby. Psst ... it's usually as soon as the park opens or just before the ride closes for the night. These posts on Rise of the Resistance at Disney World and at Disneyland will help you figure out your best strategy. 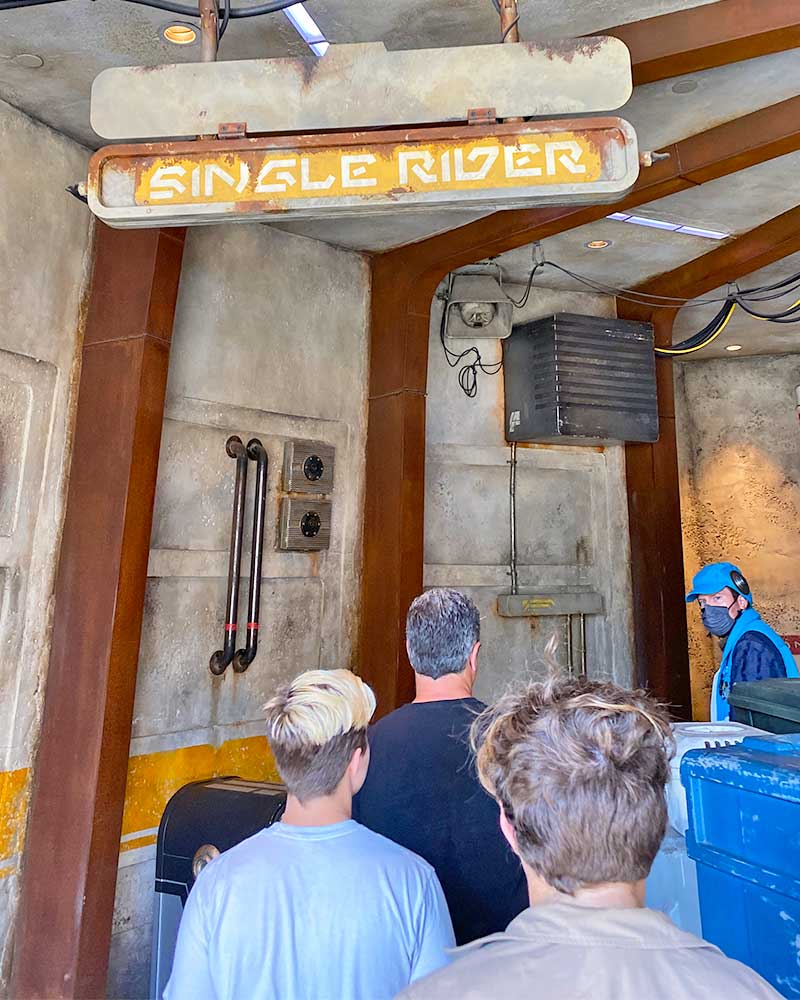 2. Do Single Rider (or Use Genie+) for Millennium Falcon: Smugglers Run

There are two ways to skip the standby queue for this one. Make a Genie+ reservation if you are using Genie+ that day or fly "Solo" for no additional cost. If you are willing to split up your party, you can use the Single Rider entrance, which is usually a much shorter line. This is the best plan if you have already ridden once because you will skip some toadally cool queue moments. Also, you increase your chances of getting the least popular position on the ride by filling in empty seats when using Single Rider. (So if you're really wanting to be one of the pilots, skip the Single Rider line for now.)

If you can visit during the day and then again at night time, you have several advantages. First of all, Batuu is beautiful at night with the spires reflecting blue. Your lightsaber photos are going to look so much better at night compared to day. 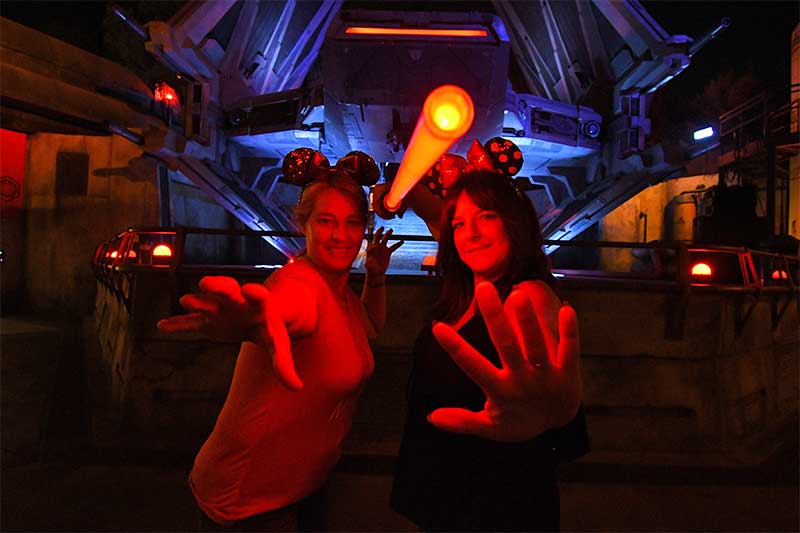 Plus you can try more food! Hit Ronto Roasters on one visit and Docking Bay 7 on a later visit. We enjoy the creative but yummy food at Docking Bay 7. Find out more in our guide to Galaxy's Edge food and drink at Disneyland.

At Disneyland, the park's fireworks are shot off just behind the spires, offering a new way to view them. It looks like a battle in the sky! Ride wait times (and temperatures) tend to drop off at night. But keep an eye on the closing time for Rise of the Resistance. It usually closes several hours earlier than the park closes. (However, over at Hollywood Studios, you won't have to worry about Rise closing early!) 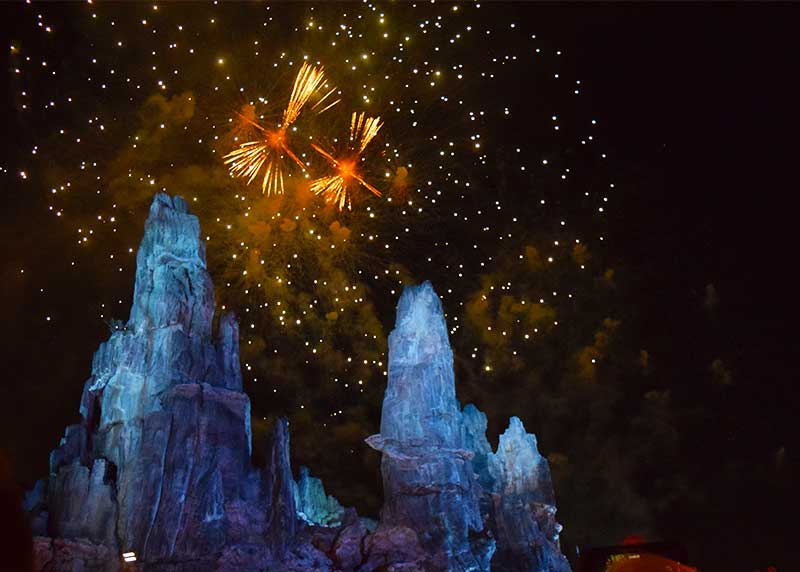 4. Make Reservations in Advance for Savi’s Workshop, Droid Depot and Oga’s Cantina (or Use a Backup Plan)

Reservations open up 60 days in advance for these experiences. If they are important to you, reserve in advance. Keep in mind that you will pay for the droid or lightsaber whether you show up or not if you do not cancel the reservations at least a day in advance. These posts will tell you everything you need to know:

One bit of advice if you plan to build a lightsaber or droid. We recommend building toward the end of your day so you do not have to carry them around all day. At Disneyland, you can drop them off at stores around the park to be held (with a receipt the day you buy them) and they can be picked up later. You can also ship them to your home from First Order Cargo at Disneyland. Over on the East Coast, merchandise pick-up is still temporarily unavailable, though you can ship them home from any store.

If reservations are unavailable, join Walk-Up lists or ask about same-day availability. If you cannot get a reservation when you are near Oga's Cantina, pull up the app and type in "Oga's Cantina." You can tap "Join Walk-Up List," when available, and you'll be alerted when to return (usually in 30 minutes). Keep in mind that most of this cantina is standing room only. As for the building experiences, you can check the app for same-day availability or ask in person.

If there is no way you can get into Oga's, you can enjoy alcoholic space libations at Milk Stand and Docking Bay 7 at Hollywood Studios. You can only find these drinks inside the Cantina at Disneyland. 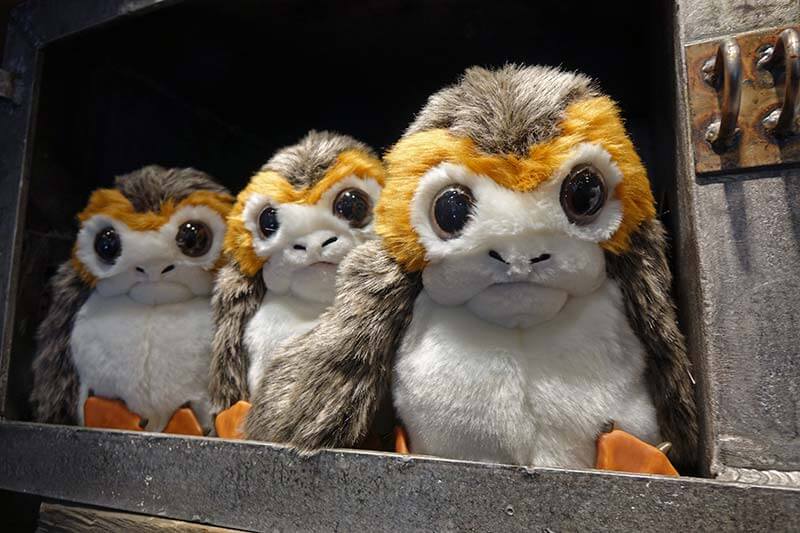 Building a lightsaber or a droid can mean spending a lot of credits. If you're a space traveler on a budget, explore the stalls at the marketplace. You may find a porg to adopt at the Creatures Stall or a doll from the Toydarian Toyshop. Perhaps you'll want to solidify your allegiance and get gear from First Order Cargo or the Resistance Supply shops. There are plenty of options for a special space souvenir beyond a lightsaber or droid. (Don't worry — TSA will allow you to bring your new possessions back to Earth.)

6. Use Mobile Order to Order Food

Save time by using mobile order. It's available at Ronto Roasters, Milk Stand and Docking Bay 7.  Our favorite can't-miss Star Wars: Galaxy's Edge food? A Ronto Wrap. The breakfast version, the lunch and dinner version and the plant-based Ronto-less Wrap are all delicious options for famished travelers. (Note: At Disney World, you'll need to order a Ronto Wrap at Docking Bay 7 after 3 p.m. once Ronto Roasters closes for the day.) We'll let you decide for yourself if you like Blue Milk or Green Milk.

7. Interact with the Characters 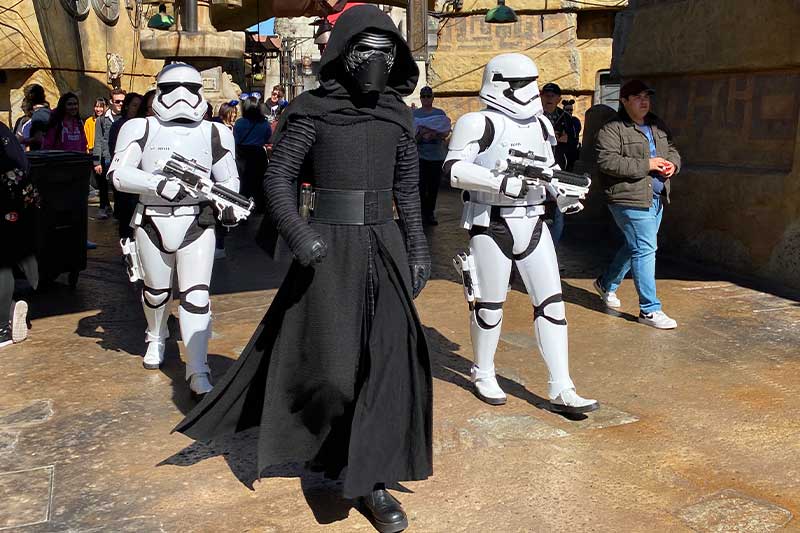 The characters are what make this land different from other parts of the theme parks. The First Order patrols the land looking for the Resistance and keeping order. They may stop and question you, praise you or even insult you, especially if they suspect you are working against them. At times, Kylo Ren and Stormtroopers appear on the stage and other times, they're out amongst the citizens and visitors of Batuu now that character interactions have returned. But if you ask for a hug, you're probably going to have that request denied.

On the other hand, Chewbacca is a great hugger! Chewie, Rey and Vi Moradi, a Rebel Spy, travel through Batuu, evading the First Order and recruiting guests to help with the cause. We've also seen R2-D2 rolling through Disneyland. So fun! You can usually find them near the Millennium Falcon, past the speeder garage and marketplace toward Rise of the Resistance.

8. Play with the Datapad and Discover Hidden Gems 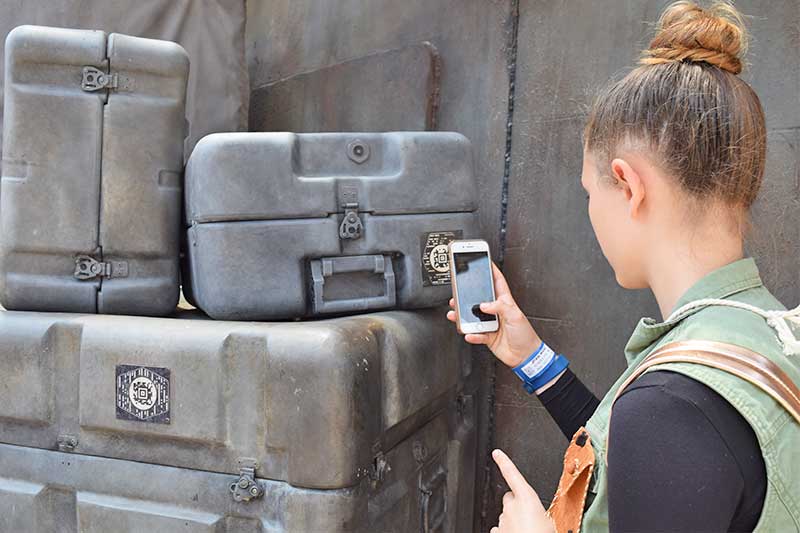 For you "Star Wars" fans, you can immerse yourself in the story by using the Data Pad. It's available through the Play Disney Parks app at Disneyland and Disney World. Entering Batuu will trigger it to turn on. You can scan containers, hack into systems, translate Aurebesh, the language of Batuu and tune into transmissions. We once fired up the Millennium Falcon with it! Bring an external phone charger with you if you plan to use the Datapad. You will ally yourself with a First Order or Rebellion or strike out on your own as a scoundrel working for yourself.

There are so many fun hidden gems and details around the land. Be sure to look high and low! If you look at the ground, you'll see footprints (or should we say, wheelprints) from droids and other space creatures. When you're in line for Millennium Falcon: Smugglers Run, look out the window and see the incredibly detailed top of the spacecraft. Also, if you stop by the "hydrator" (aka drinking fountain) near the bathroom in the Marketplace, you may spy the dianoga from the Death Star trash compactor. 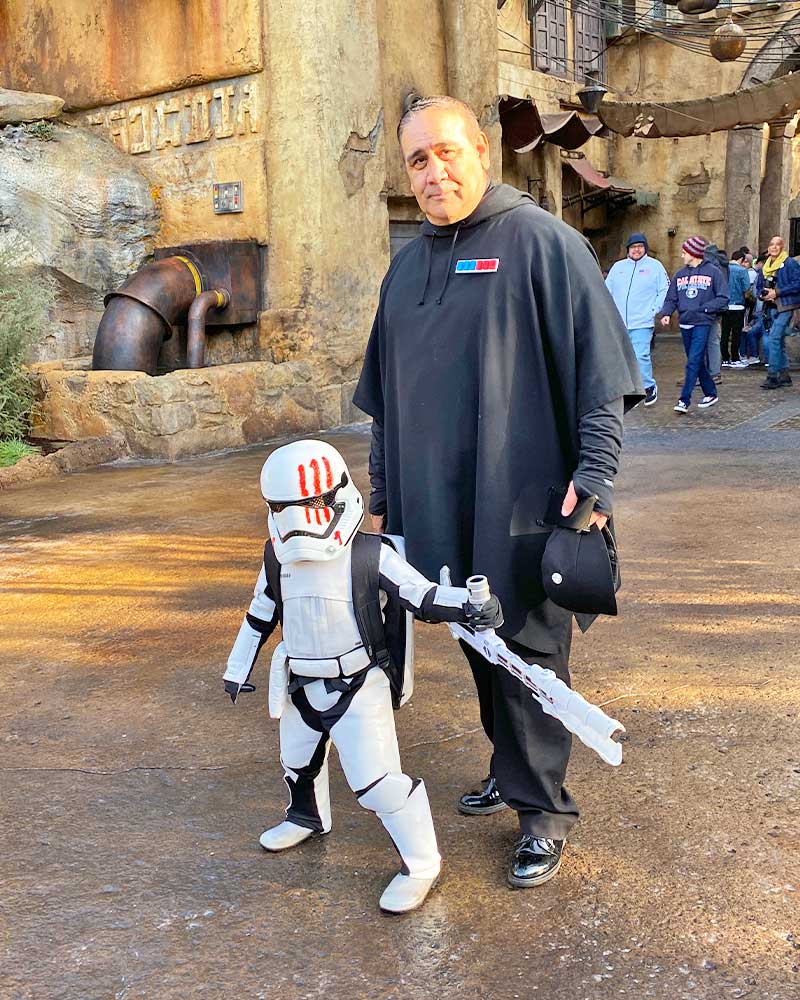 You probably already know that people 14 and up cannot wear costumes to the theme parks (except for certain special events such as After Dark parties at Disneyland.) But you can dress in theme with your street clothes. You can incorporate the colors, patterns and cuts of clothes from the "Star Wars" movies into your own wardrobe and style your hair as if you were part of the story. (Space buns for the win!) You cannot wear long robes or have parts of your outfit drag on the ground.

Not only will it make your photos toadally awesome, but it may cause the characters and citizens of Batuu to engage further with you. Check out our guide to DisneyBounding for more inspiration!

Take advantage of the professional photographers, or imagers, in the land to take your photos in iconic spots. Ask for holograms — that would be Magic Shots — for special surprises when you get your photo. 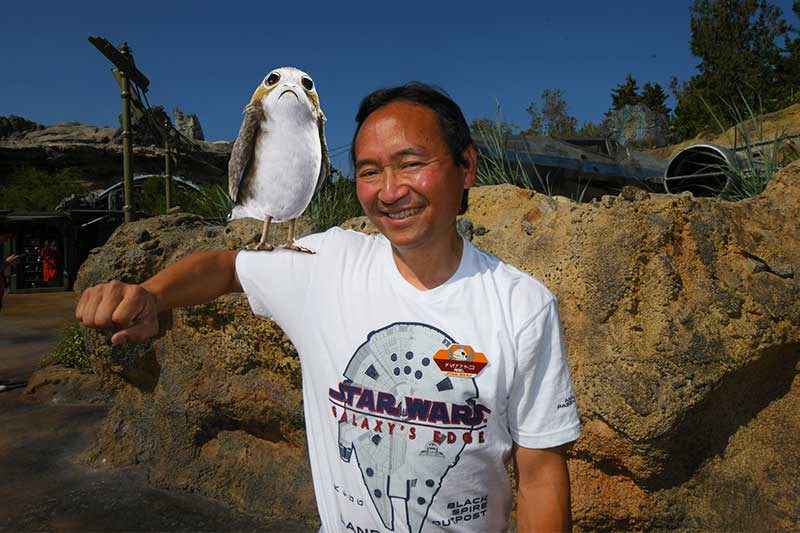 If you build a droid or a lightsaber, you will definitely want to take photos of yourself within the land. If you are using Genie+ at Disneyland, all your PhotoPass photos are included. At Disney World, they are not so you'll have to purchase separately. But Genie+ users at Disney Hollywood Studios can access fun augmented reality filters instead. Plus, Disney World has some cool Magic Shot opportunities, including a zoom-in/zoom-out shot near the Millennium Falcon. Hollywood Studios will even have four all-new special Magic Shots available for May the Fourth (and they'll stick around after the celebration ends)!

Hopfully, these 10 tips for Star Wars: Galaxy's Edge will help you on your mission to do it all on your visit. May the Force be with you!

Related: Our Guide to Star Wars: Galaxy's Edge at Disneyland